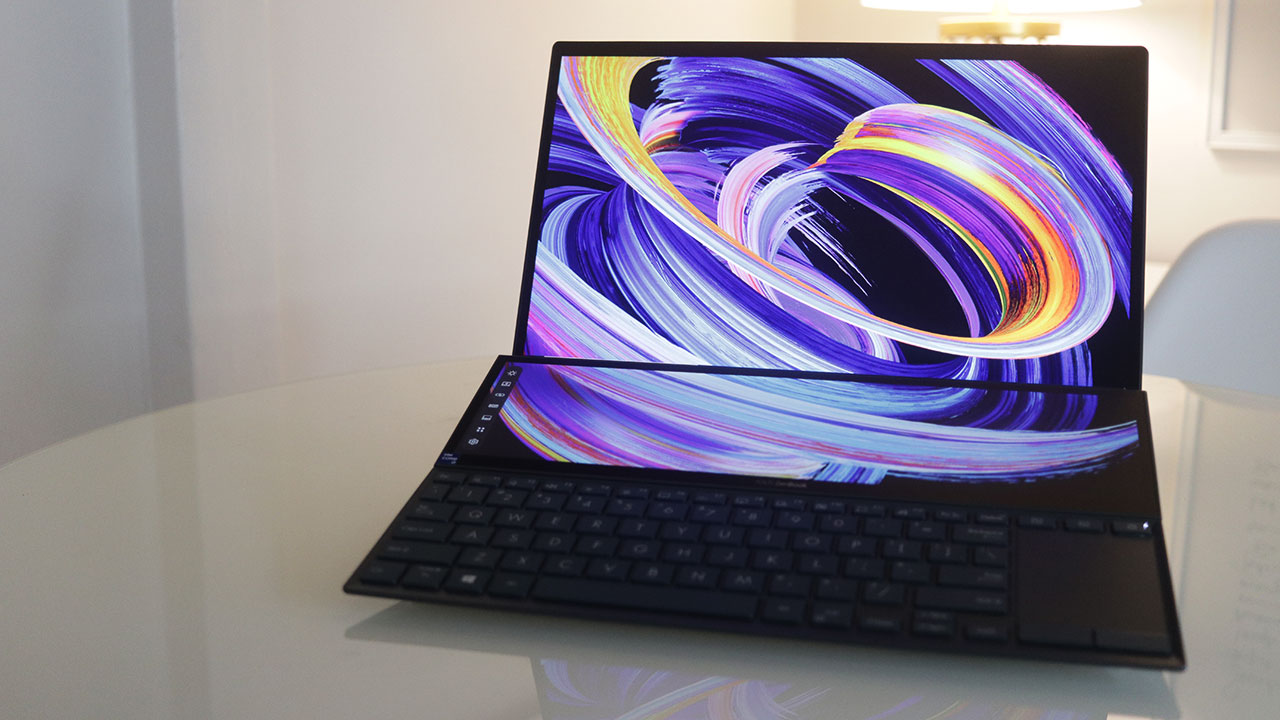 The ASUS ZenBook Duo 14 (UX482) is the latest iteration of the dual-screen design the company first introduced with the ZenBook Pro Duo in 2019 and expanded with last year’s more affordable ZenBook Duo 14 (UX481). The UX482 was initially announced at CES 2021 and is finally making its way to the Philippines soon.

This new model features quite a few significant upgrades to its design, features, and specifications from its predecessor, including a new hinge design for its now tilting ScreenPad Plus, the new ScreenXpert 2.0 software, an 11th generation Intel Core processor with Intel’s new Iris XE GPU or NVIDIA’s new GeForce MX450 GPU, and many more.

The new ZenBook Duo 14 (UX482) comes in a simple dark cardboard box with the ASUS ZenBook Duo branding in front. 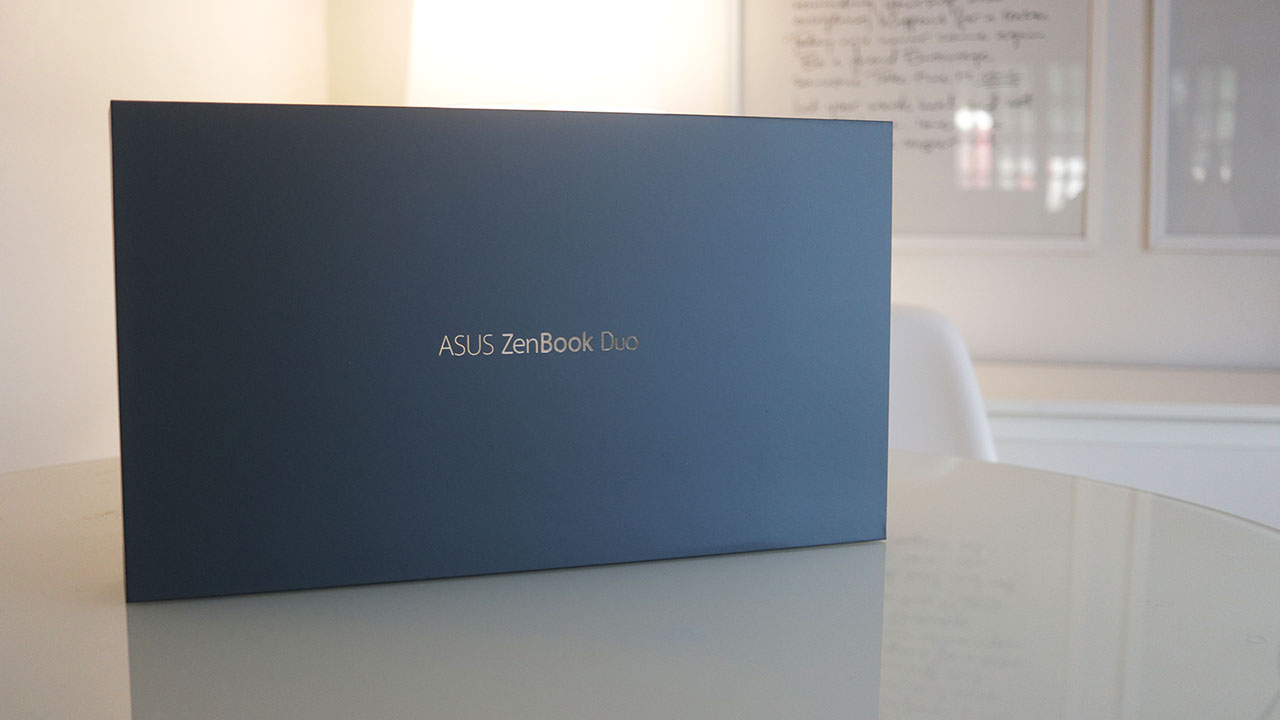 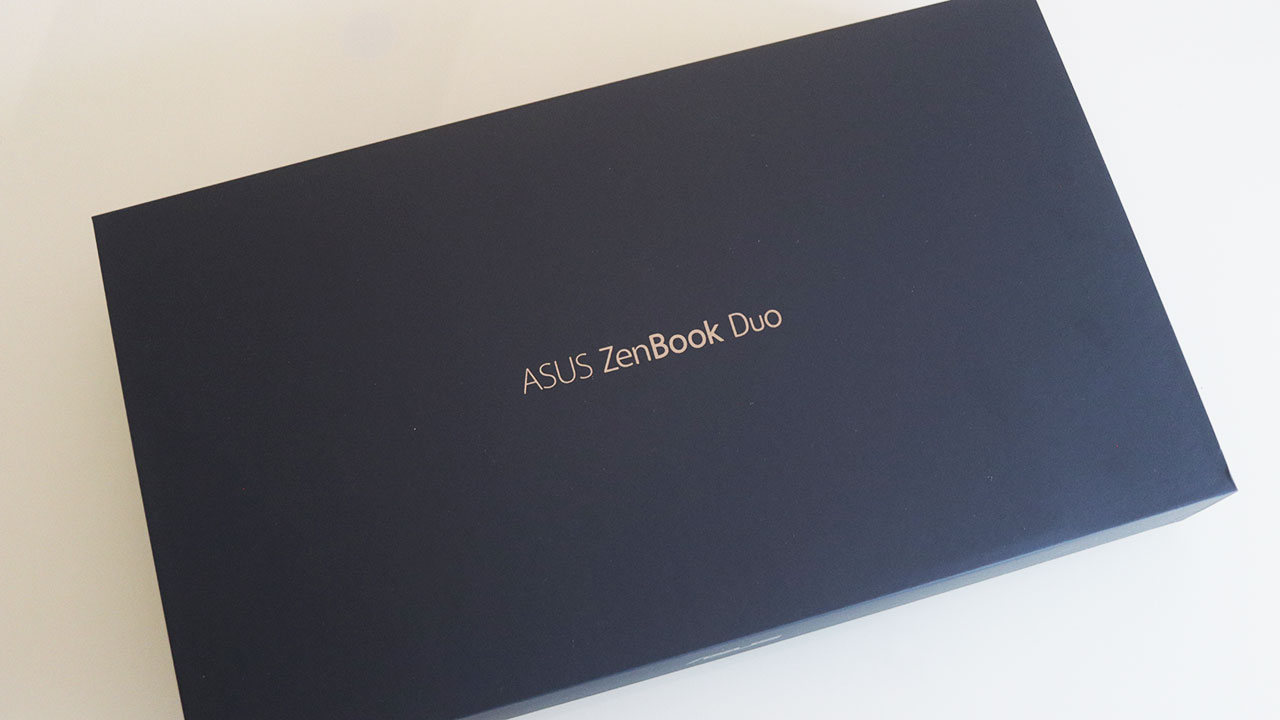 Taking the top cover off the box reveals the laptop wrapped in plastic with a foil sticker that shows off some of the key features of the UX482. 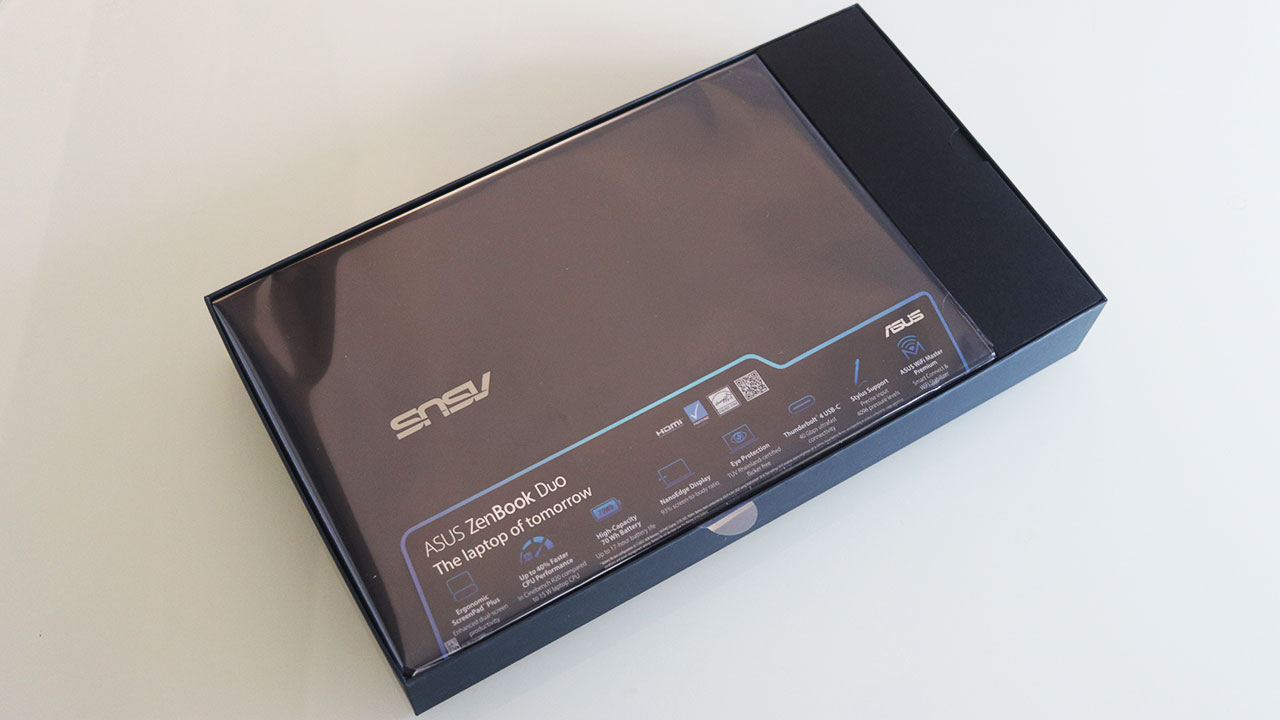 Removing the laptop from the box reveals one of its main compartments which houses the laptop’s paperwork, the included stylus, and a foldable stand that attaches to the bottom of the UX482. 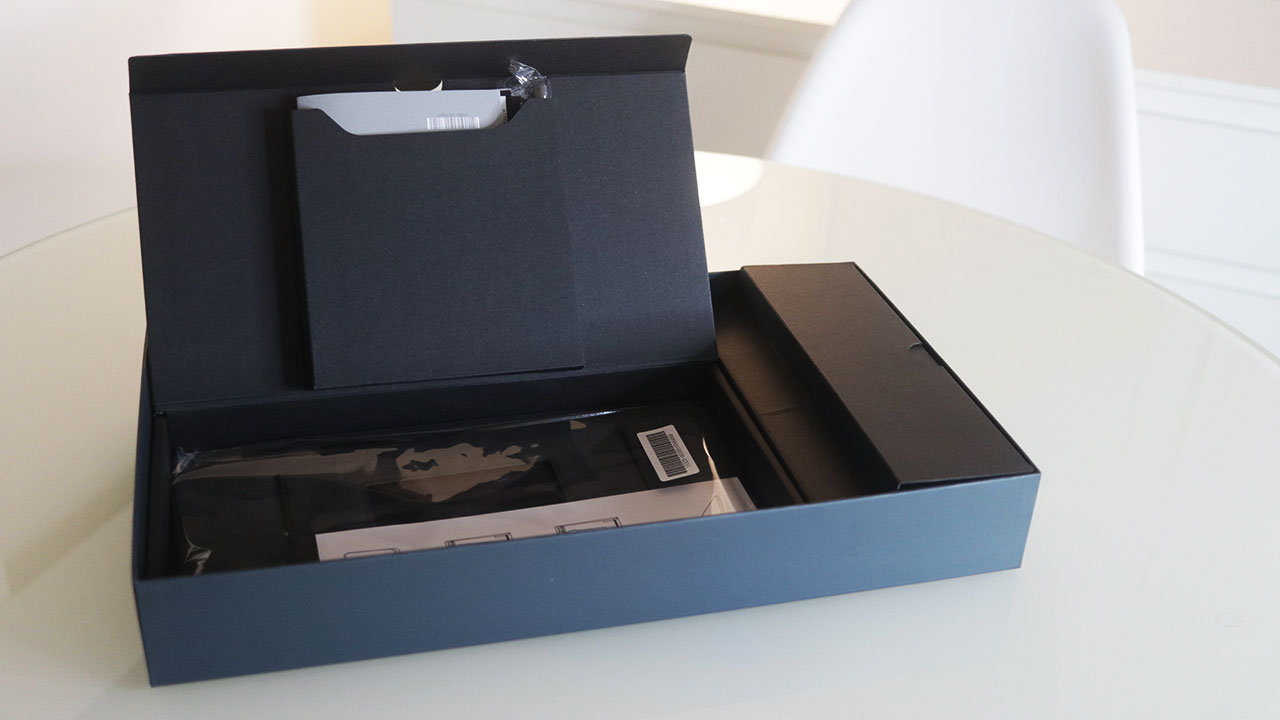 The smaller side compartment houses the laptop’s 65W power adapter that terminates into a USB Type-C connector. 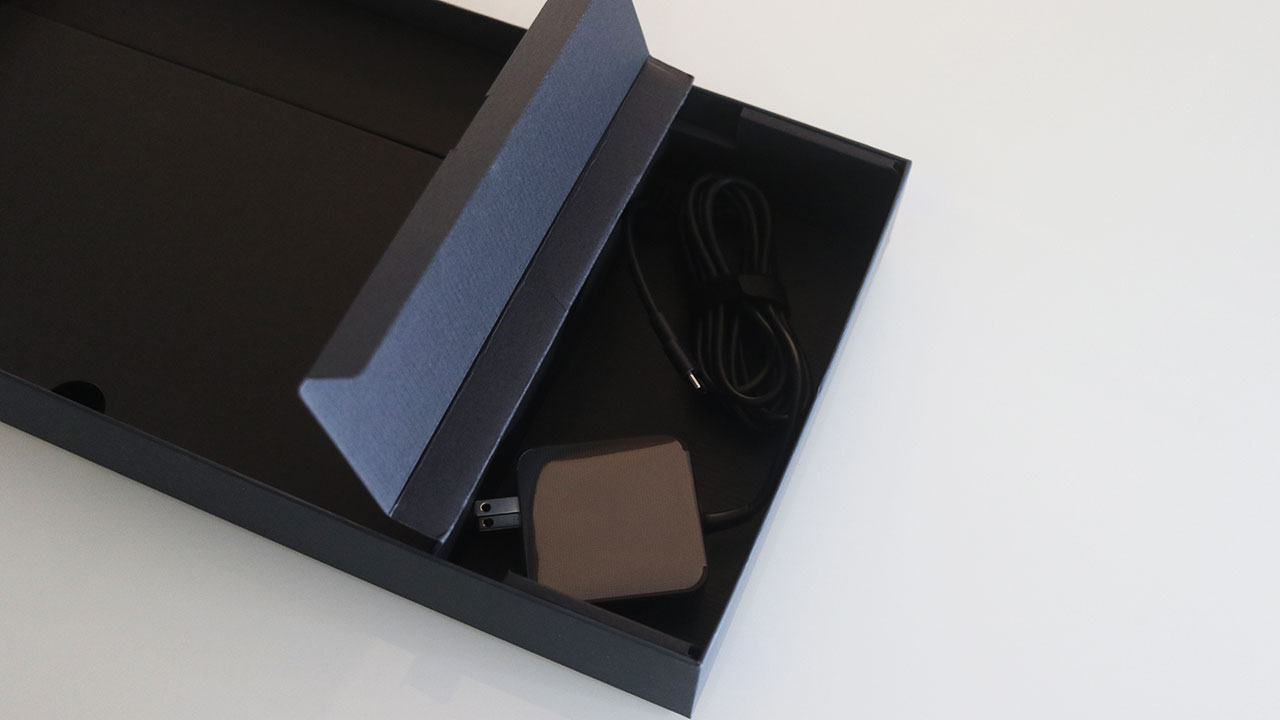 Outside of the box, ASUS has also included a leather laptop sleeve with the UX482 that has a loop inside for the included stylus. 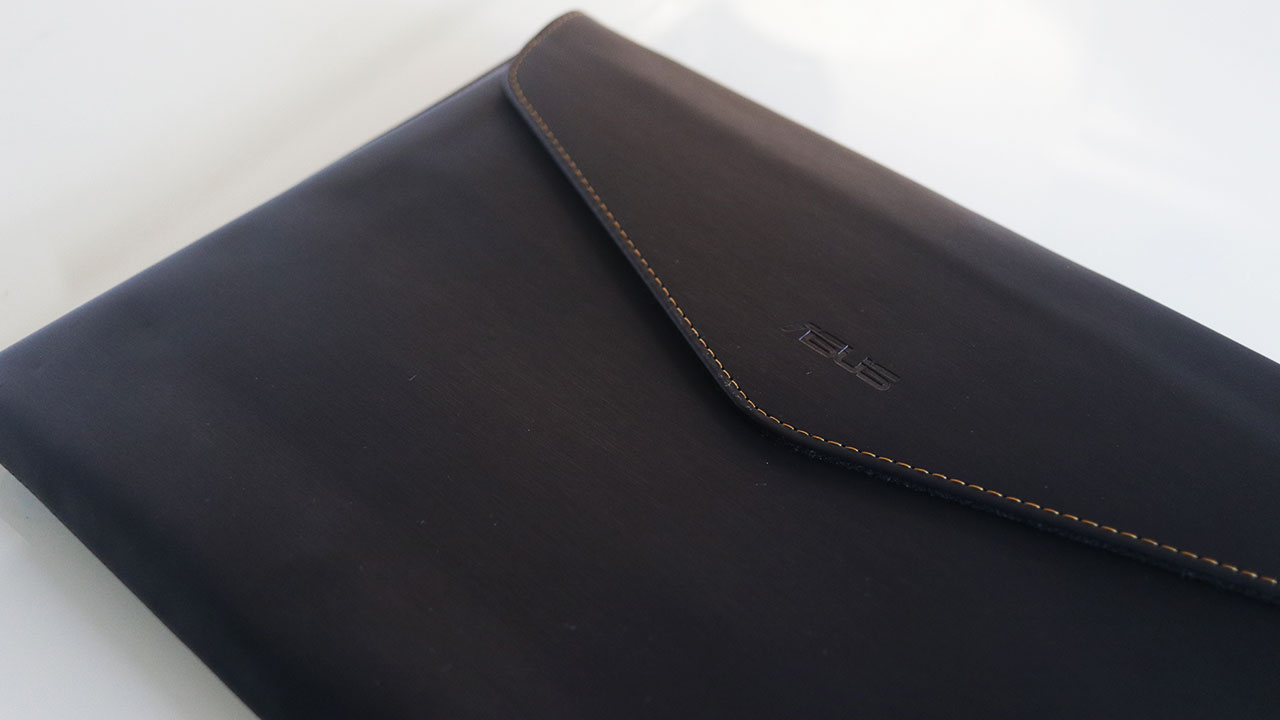 With all the features the ZenBook Duo 14 (UX482) already has to offer, having additional accessories such as the sleeve, stylus, and stand included in the package are a good bonus. 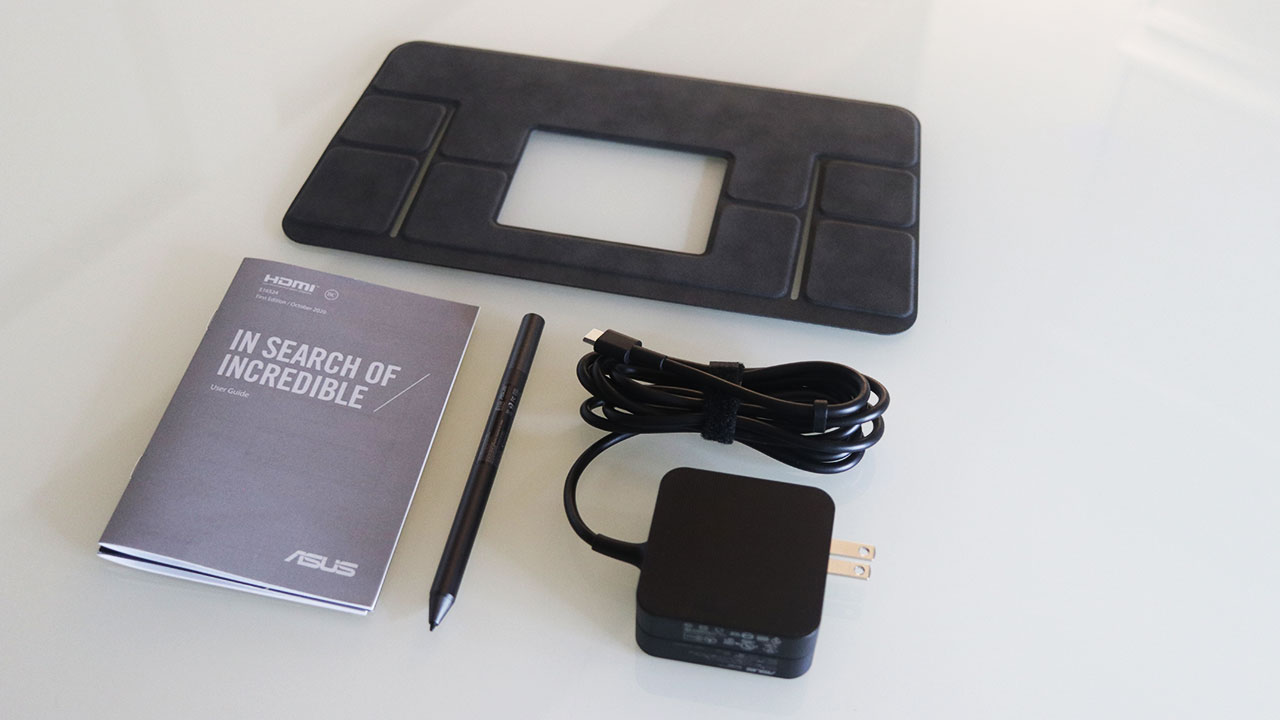 The ZenBook Duo 14 (UX482) still features a magnesium aluminum alloy chassis and lid that comes in what ASUS calls Celestial Blue finish but is now 50 grams lighter at only and 3mm slimmer than last year’s model. 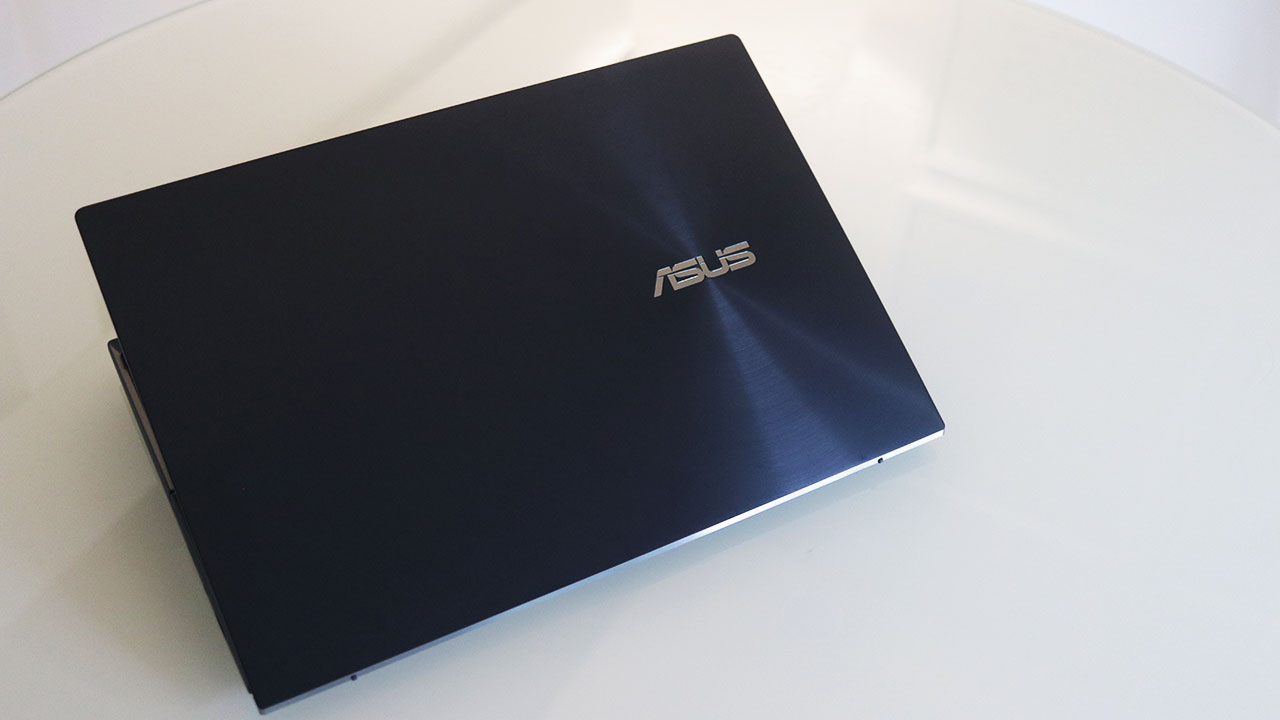 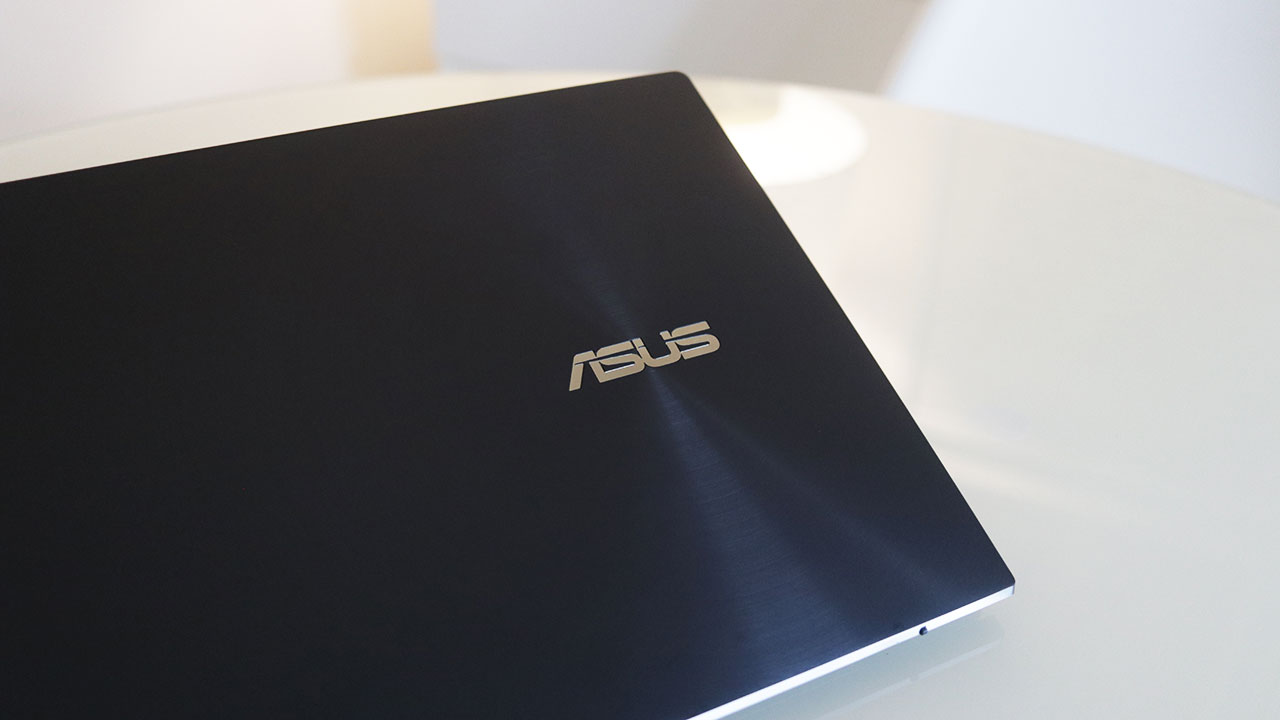 The most significant change with the new UX482 though is its new hinge design that not only tilts the ScreenPad Plus when the lid is opened but also lifts one edge of the laptop off the table to not only improve the viewing angle of the display and ScreenPad Plus, the latter of which was a concern with the previous models, but to also facilitate the AAS Plus cooling which pulls in air through the opening between the chassis and ScreenPad Plus and exhausts it between the chassis and the display. The space below the lifted body allows air to flow beneath the laptop to improve cooling further. ASUS says this design improves airflow by 49%. 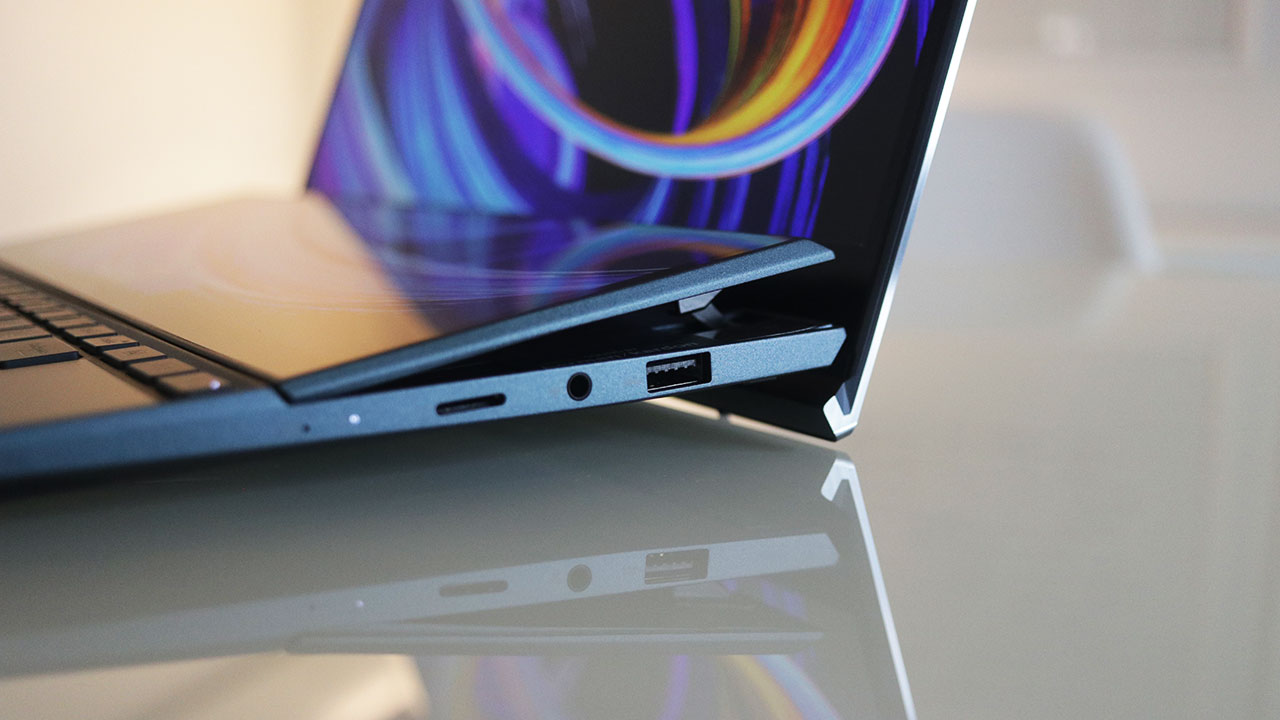 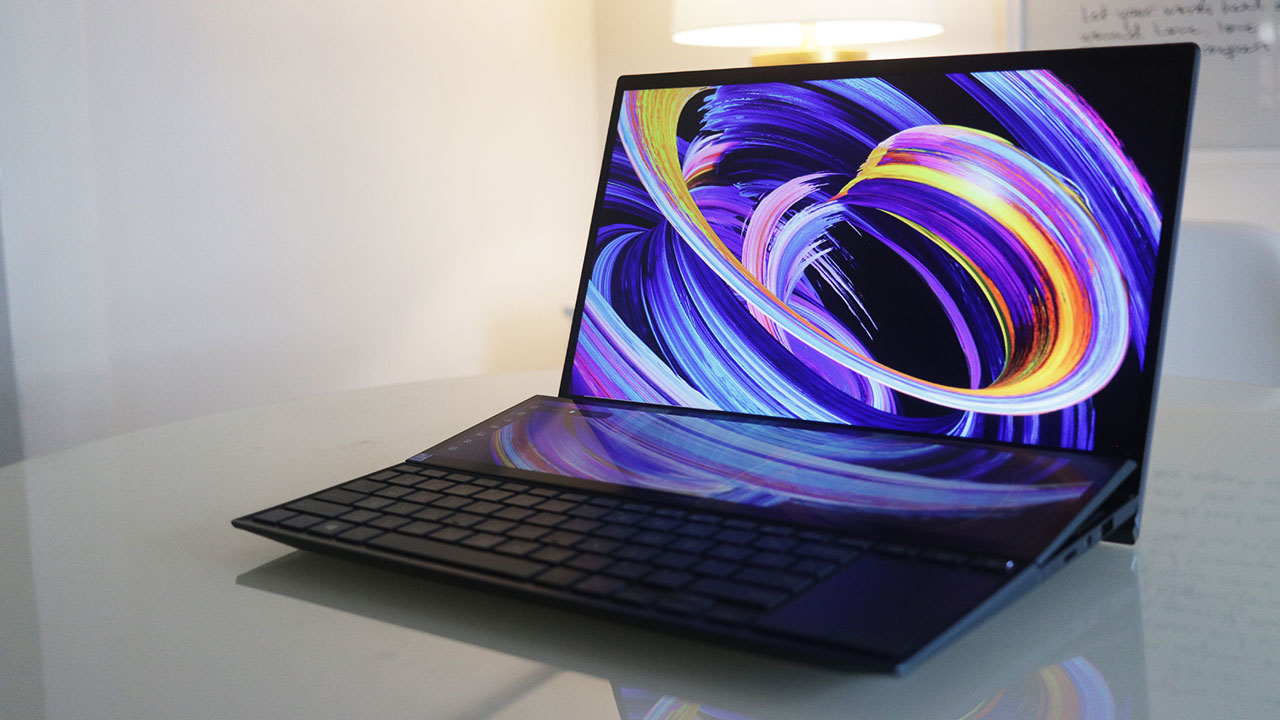 Even with everything it’s doing, the new hinge on the UX482 is also smaller than the one on the previous model, allowing the laptop to be slimmer than its predecessor. ASUS was also able to make the new UX482 thinner by redesigning its internals, which include utilizing a 10-layer PCB as well as splitting it into a main motherboard board and a daughter board. It also features a new thermal design that includes two fans equipped with more blades than the previous generation as well as a wider and more efficient 10mm heat pipe, both of which help the laptop maintain a sustained CPU TDP of 28 watts.

For users who like to partially close the lid of their laptops when they step away from it, the two G-sensors reduce its CPU TDP when it detects that the lid is partially closed to limit power consumption and improve its battery life. 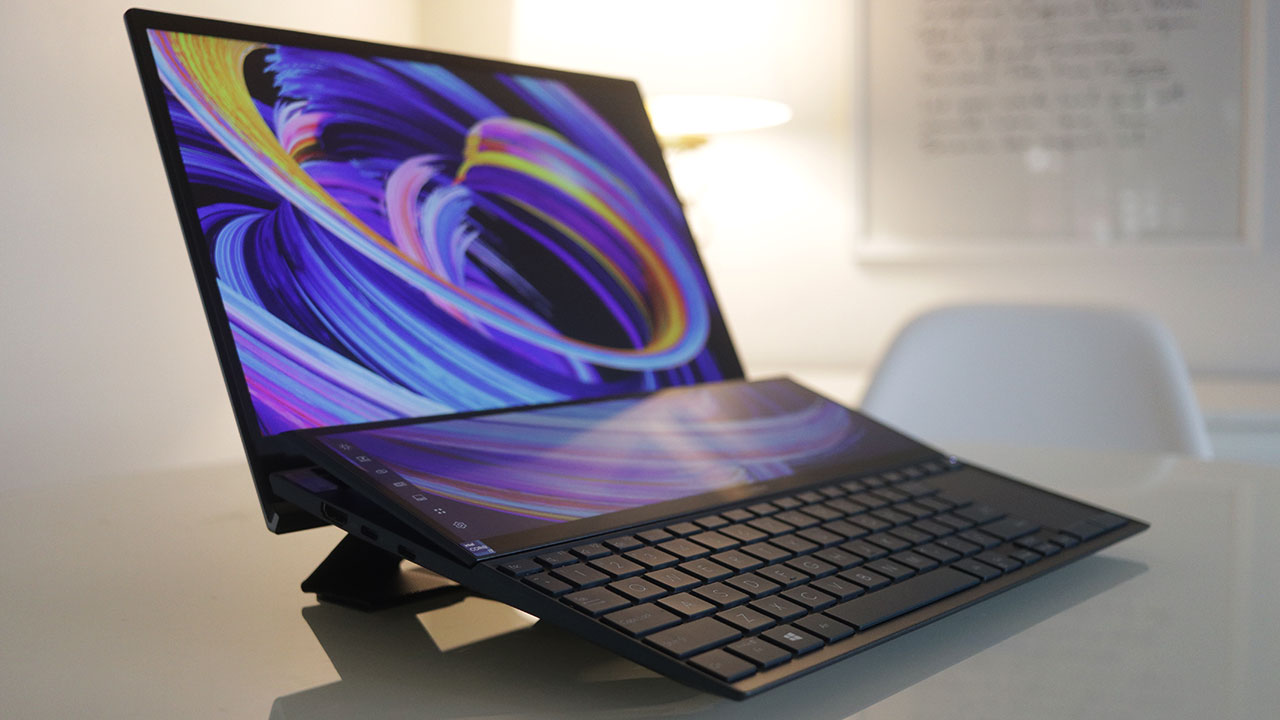 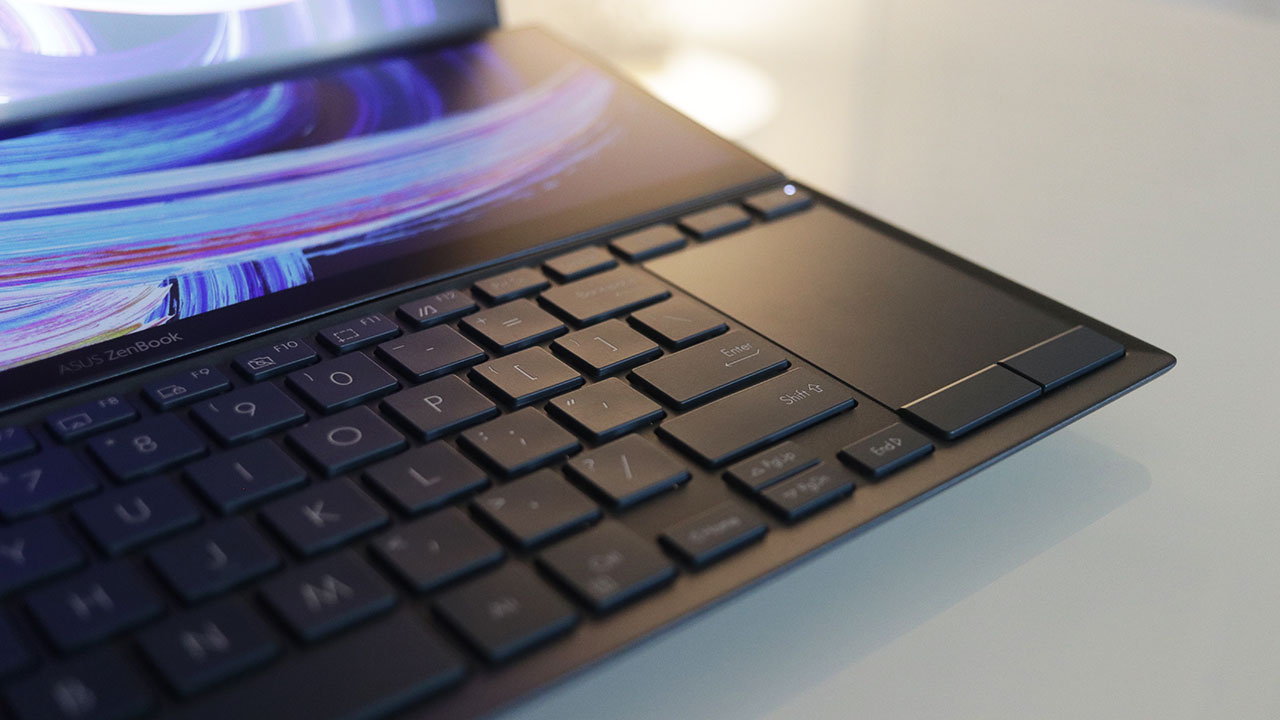 The main display of the UX482 is a 14-inch Full HD IPS-level NanoEdge touch display flanked by slim 4mm side bezels. It features a 100% sRGB color gamut, Pantone validation, and a maximum brightness of 400 nits. 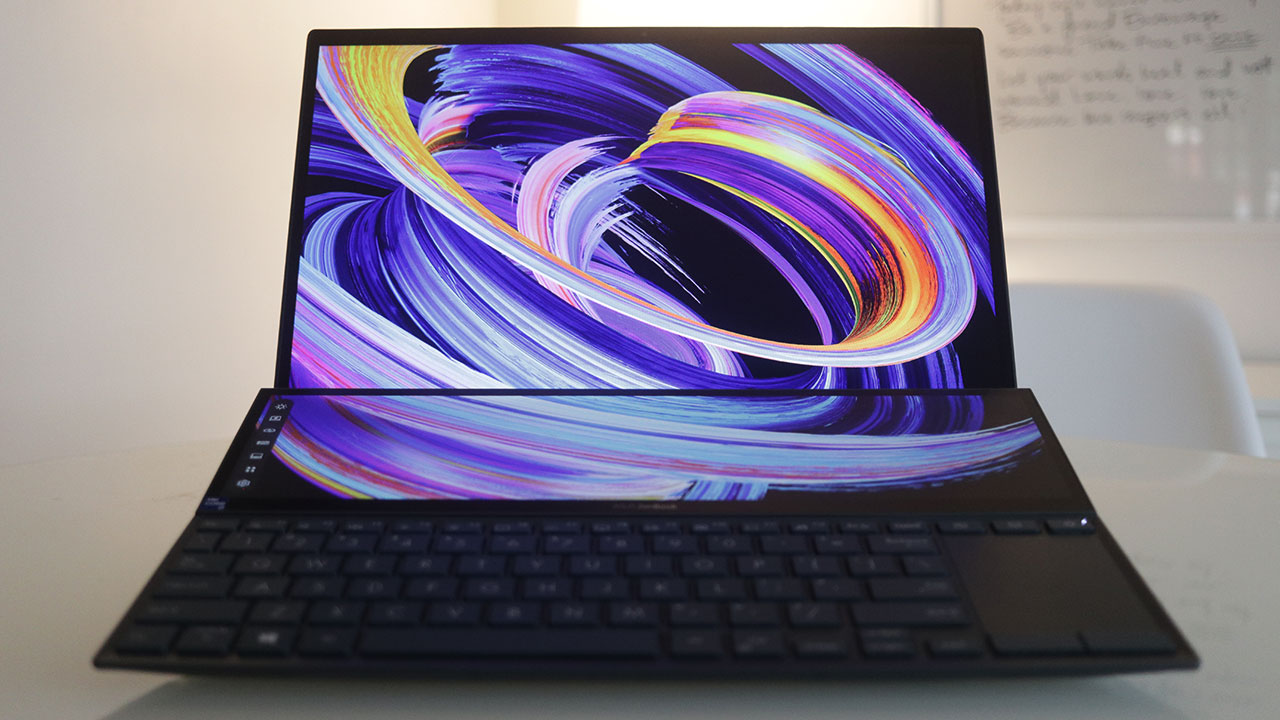 The brightness of the 12.65-inch ScreenPad Plus has also been improved to match the main display. But more importantly, the ScreenPad Plus now features several improvements with its new ScreenXpert 2.0 software that make it more versatile and intuitive to use. 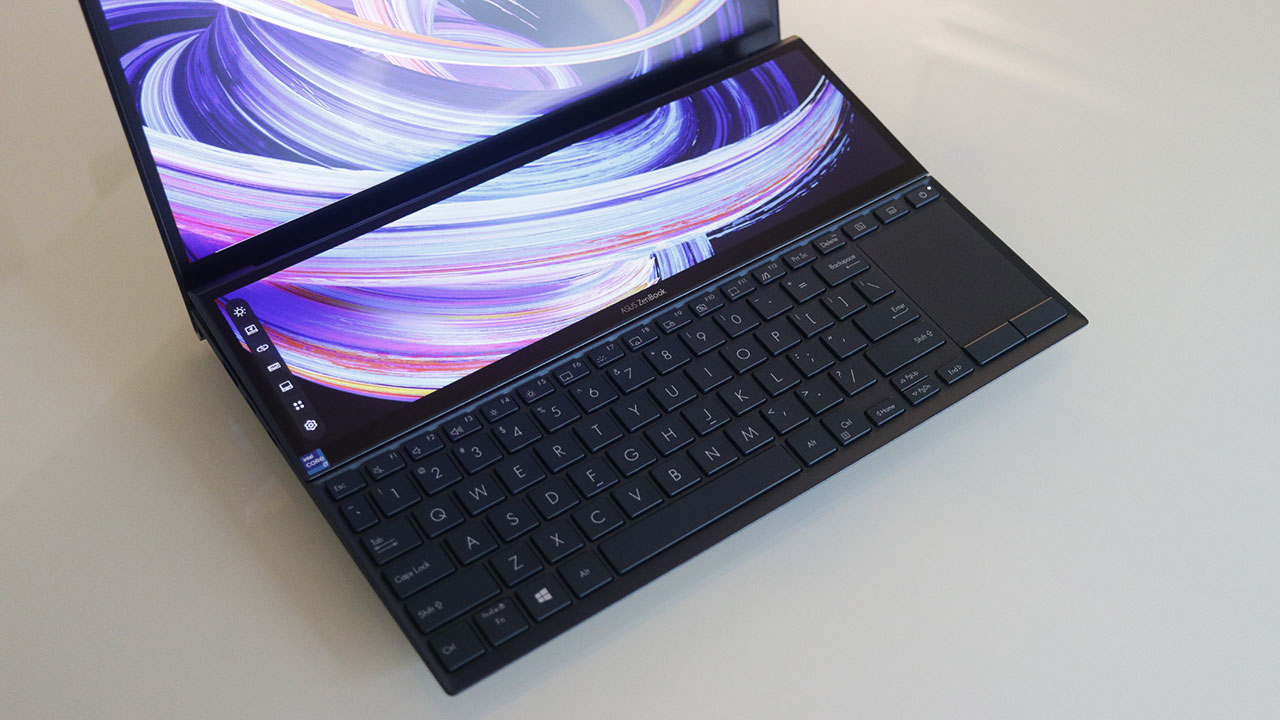 The new ScreenXpert Control Center, which can be docked to the left, right, or bottom of the ScreenPad Plus display makes it easier to access some of its basic features such as brightness adjustment, app navigator, task swap, task groups, settings, and more. There are also a set of new features that can be accessed via the Control Center, including the new touchpad mode that turns the ScreenPad Plus into a typical touchpad, and the new app launcher that gives users an easy way to launch apps on the ScreenPad Plus. 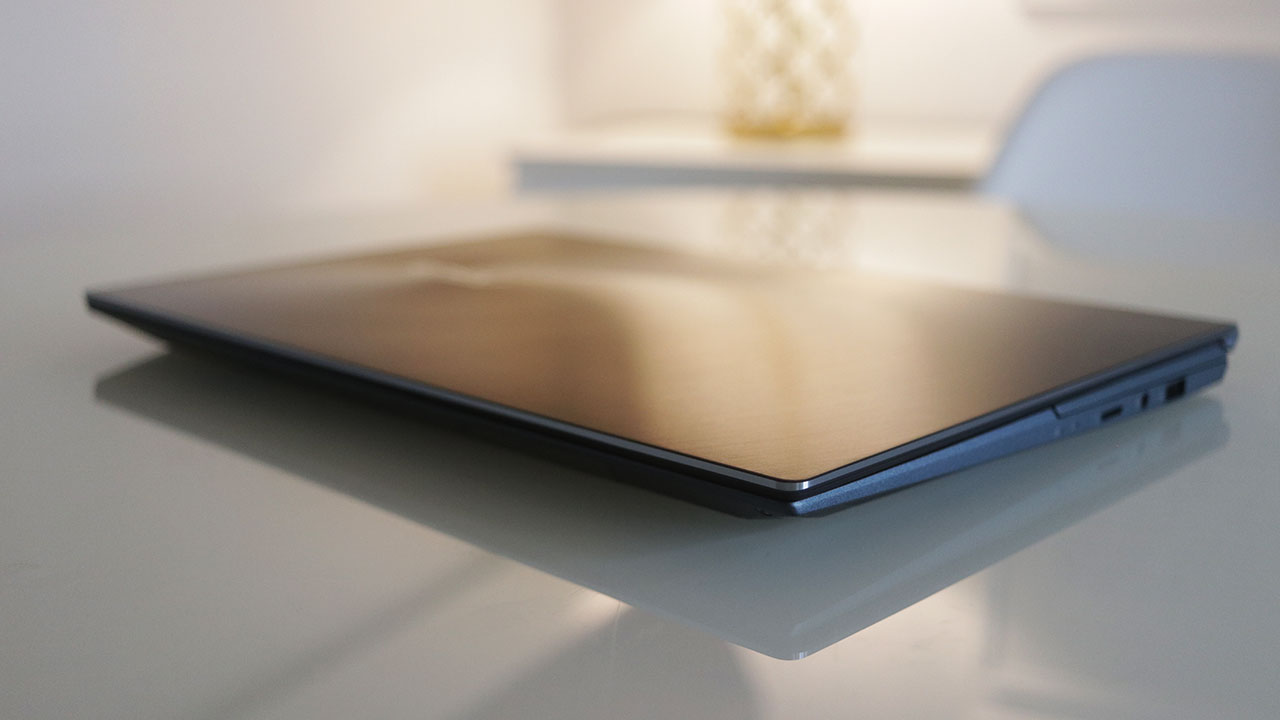 ASUS has also added the new Control Panel app with ScreenXpert 2.0 that gives users a customizable digital control panel for use with supported apps. Currently, the app supports several of Adobe software including Premiere, After Effects, Photoshop, and Lightroom Classic. When users open any of these programs, the app automatically opens a corresponding control deck suited for each software that gives users easy access to certain functions, such as zoom, brightness, contrast, and more via sliders, buttons, and dials. Users will also be able to customize the functions and positions of each of the panels’ controls and the app will automatically launch the deck assigned to each program. 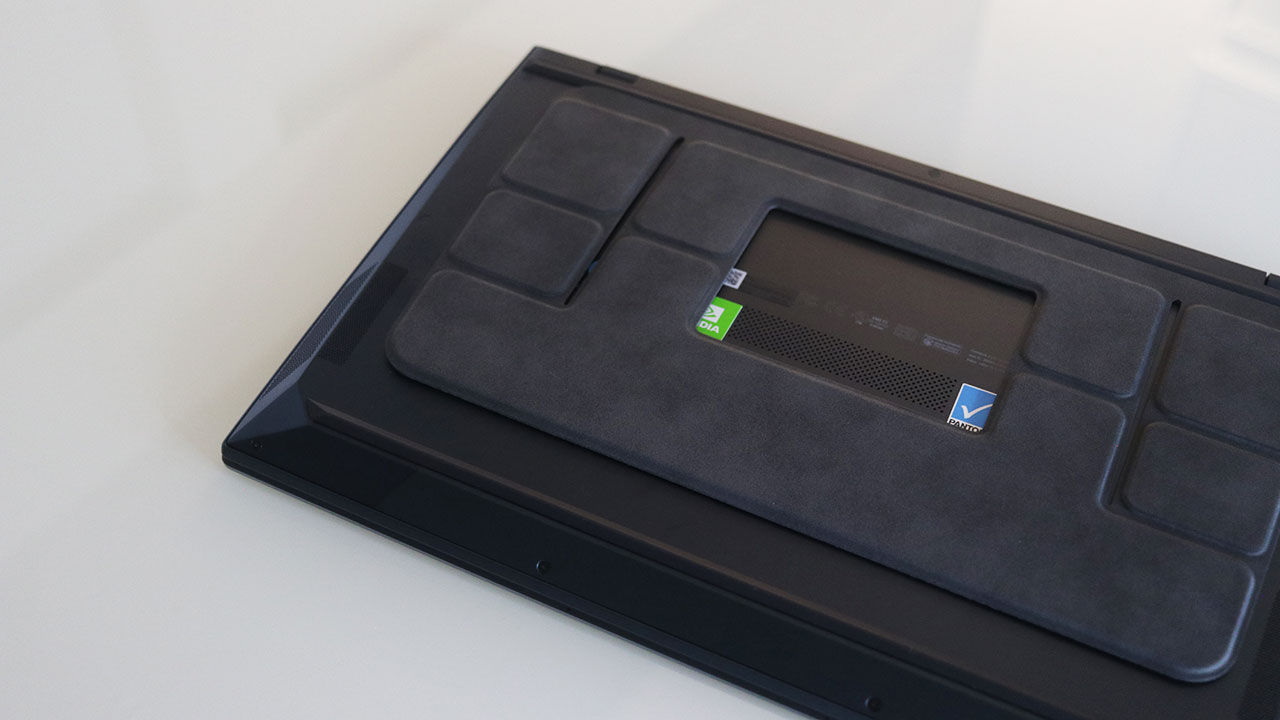 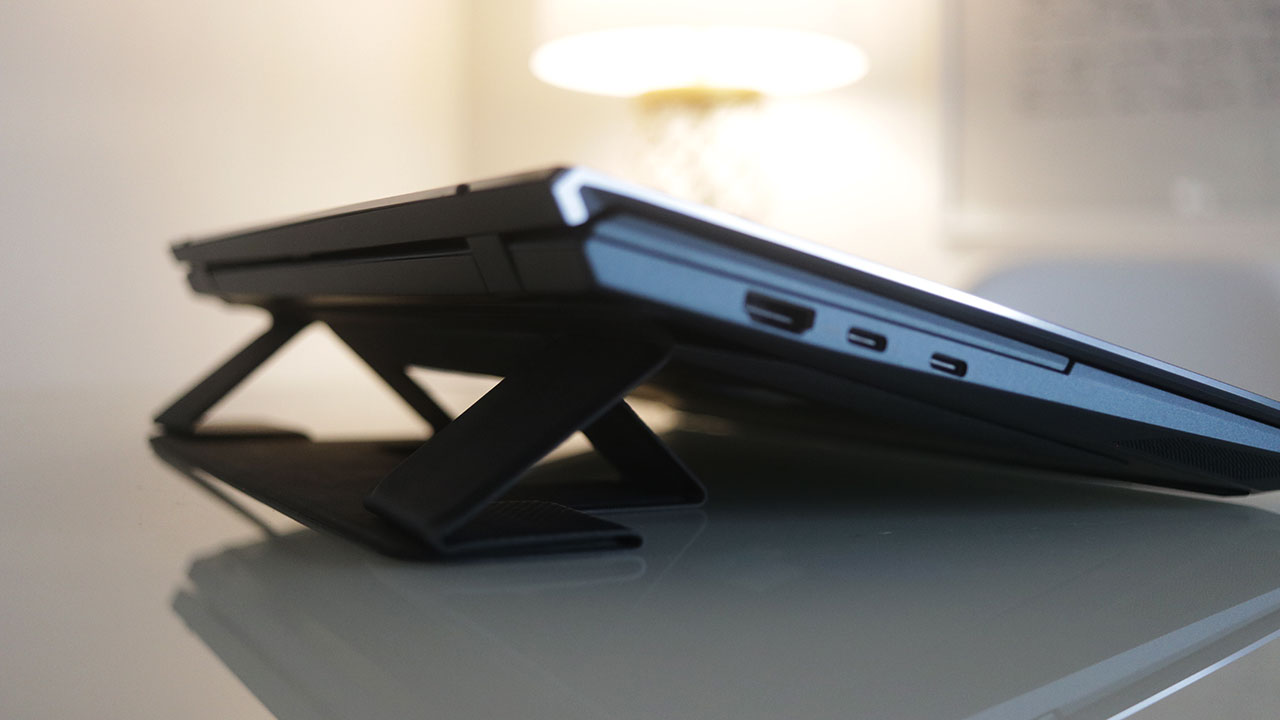 Internally, the UX482 is powered by either an Intel Core i5-1135G7 or i7-1165G7 processor, up to 16GB of 4266 MHz LPDDR4X RAM, either Intel Iris Xe graphics or an NVIDIA GeForce MX450 GPU, and up to 1tB of PCIe 3.0 x4 NVMe SSD storage. It also has WiFi 6, Bluetooth 5, Harman Kardon certified audio, a webcam that supports Windows Hello, a microphone array with AI noise-canceling and Cortana support.

ASUS has also made some changes to the I/O ports for the UX482. One of the USB3.2 Gen 2 Type-A ports and the USB 3.2 Gen 2 Type-C port have been replaced with two Thunderbolt 4 ports that support both display output and power delivery. 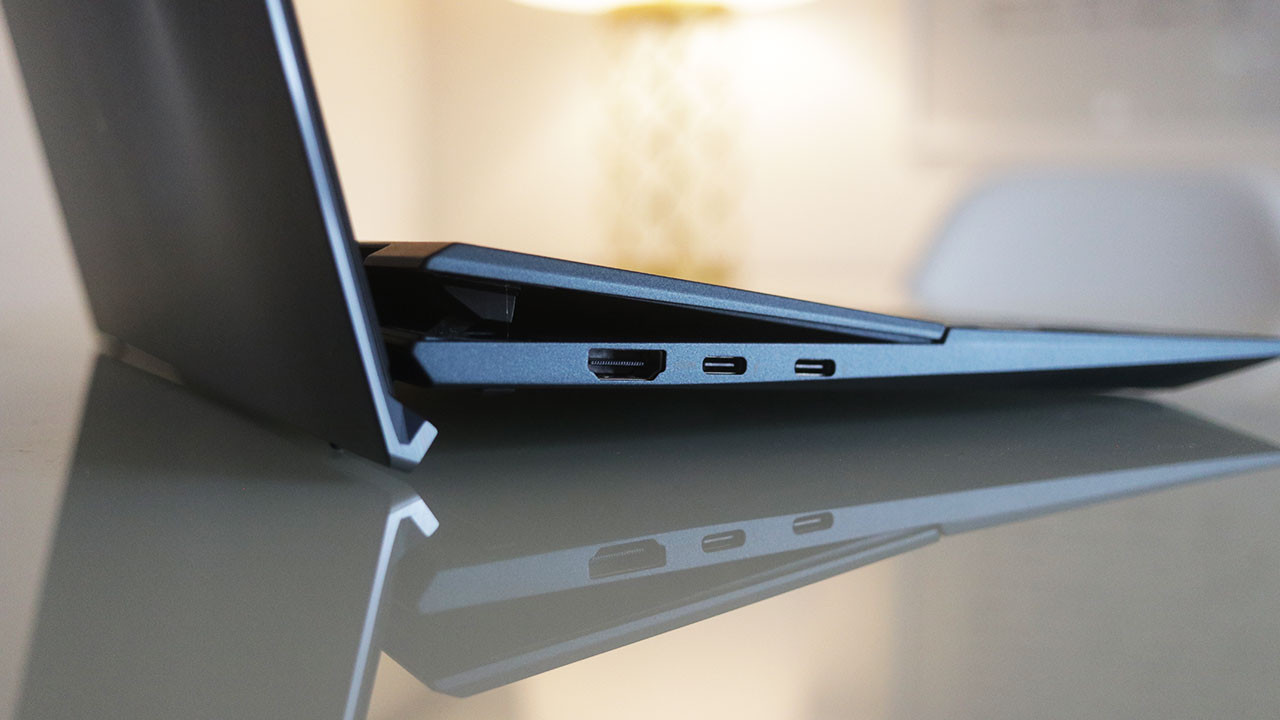 Because of this, ASUS has removed the dedicated power adapter port and replaced the old power adapter with one that plugs into one of the two Thunderbolt 4 ports. This means that when you’re charging the laptop, you’ll be short one USB port than you would have on the previous model. The rest of the ports on the UX482 remain the same though, including the HDMI 1.4 port, 1x 3.5mm combo audio jack, and a micro SD card reader. Lastly, ASUS says the 70Wh battery of the UX482 can last up to 17 hours but will depend on your configuration, settings, and usage. 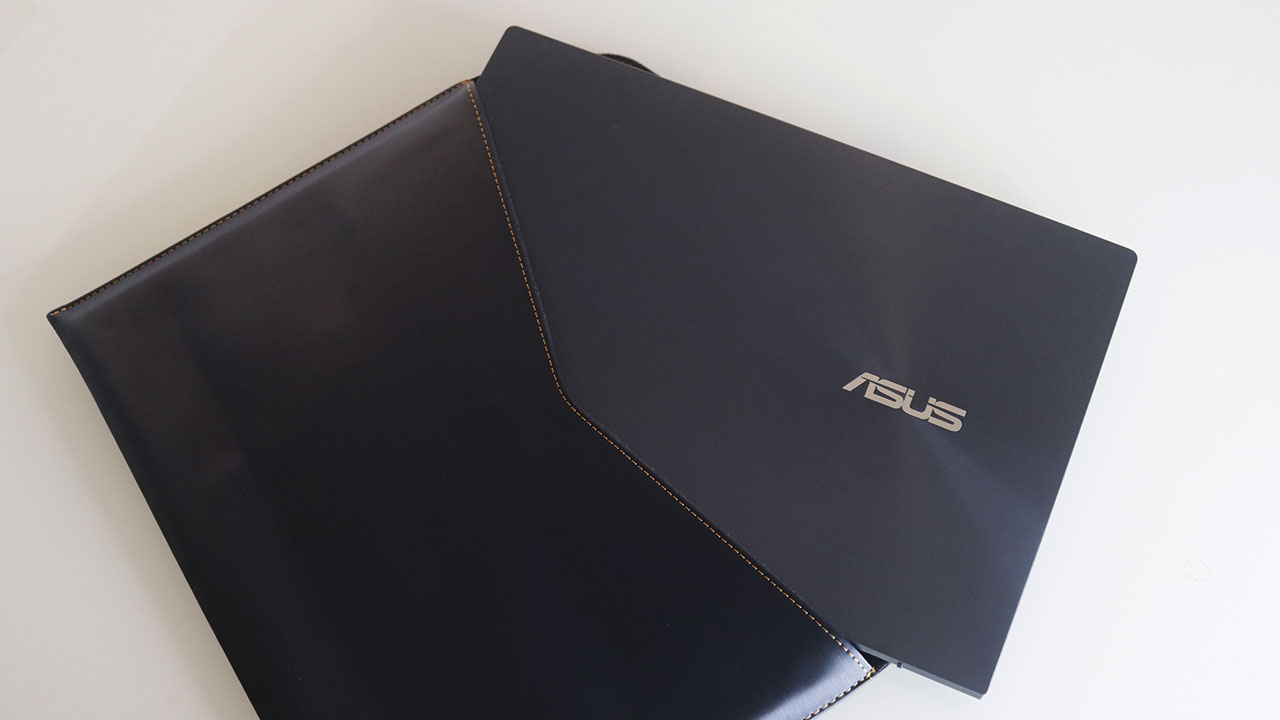 From the onset, we’re pretty impressed with the new hinge design, with the tilting ScreenPad Plus. While we’re still not a big fan of the right-hand side touchpad, because it’s unwieldy for left-handed users, it’s a necessity to fit in the new ScreenPad Plus. We’re excited to see how well the new ZenBook Duo 14 (UX482) performs with the new AAS Plus cooling solution and seeing how well the ScreenXpert 2.0 features work, especially with supported programs such as Adobe Premiere and Photoshop. So far the new design, features, and specifications of the UX482 are all pretty impressive and it’s actually one of the few laptops that we consider being innovative with its features, specifically with the ScreenPad Plus.