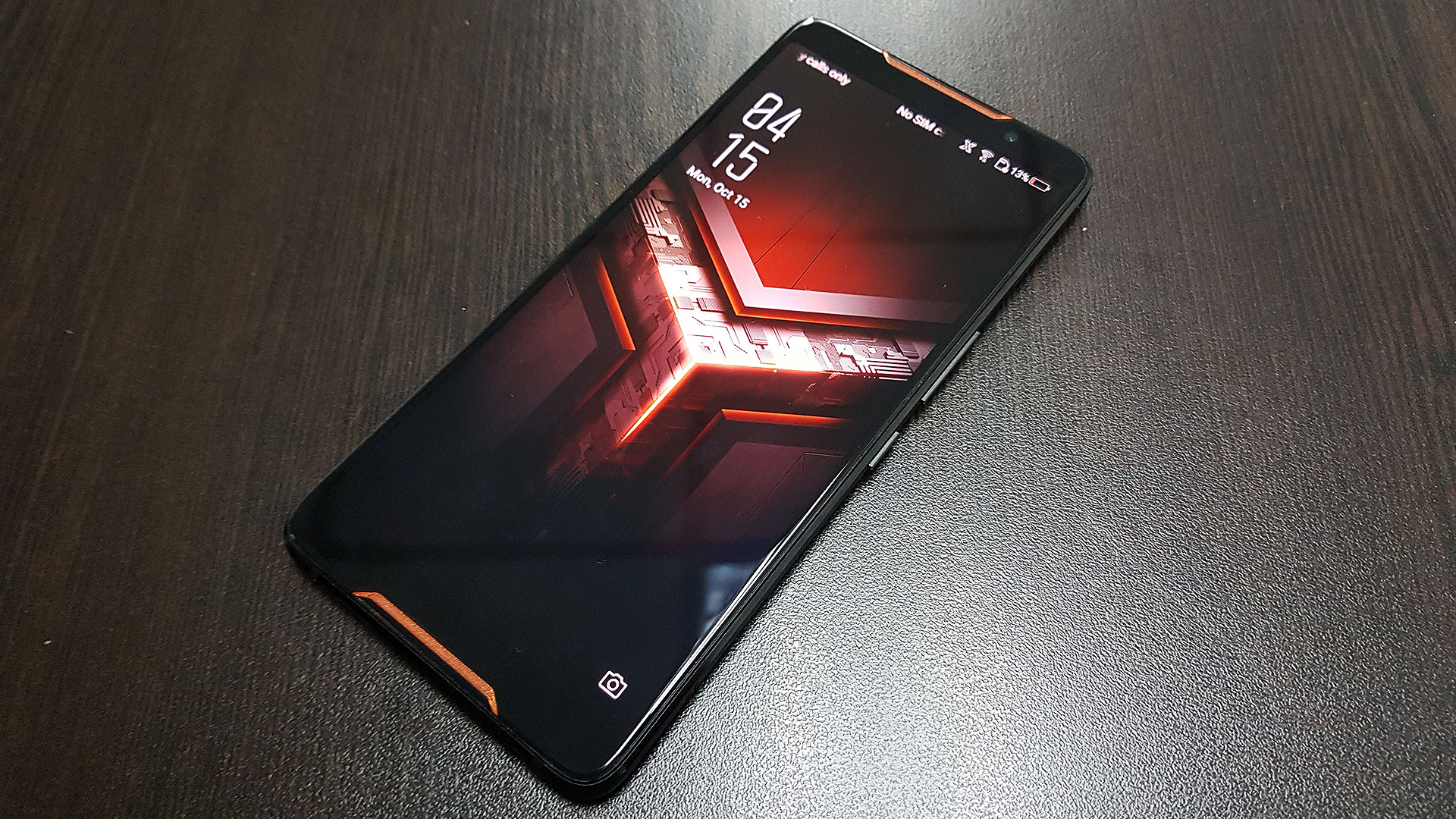 Devices designed and targeted for gamers has been the one of the many growing trends in the tech industry, with the number of “gaming” products being released over the past half decade increasing significantly. And one of the latest developments that has come out of the “gaming” movement is the advent of gaming smartphones.

Several gaming phones have already been announced and released over the past year but one of the most interesting is the ROG Phone from ASUS, as it isn’t just a high-end smartphone with a “gaming” label but actually introduces several features that directly affect and benefit the mobile gaming experience. 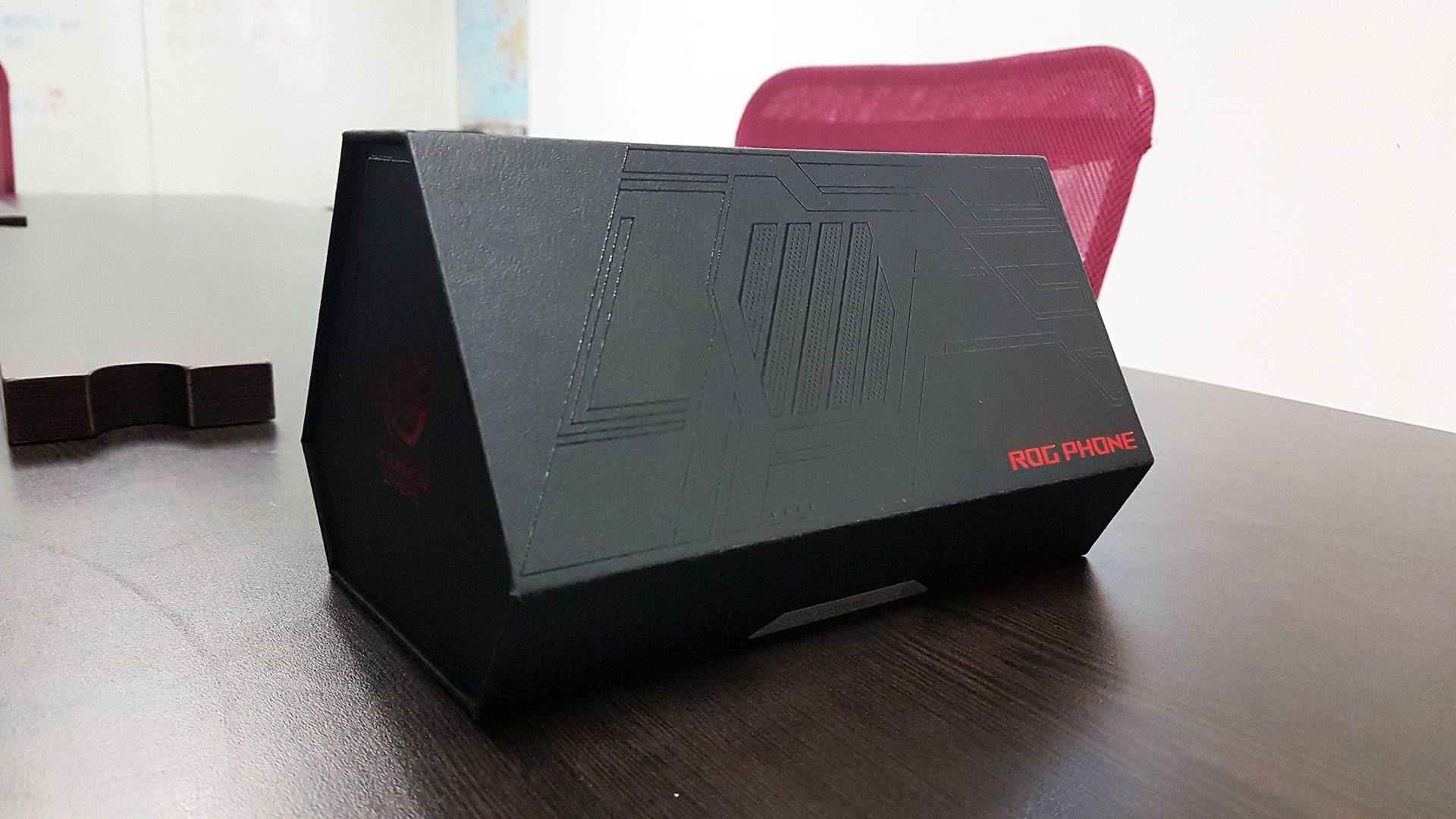 The ROG Phone comes in a fairly unique packaging. Shaped like a hexagonal prism, the box features a similar futuristic mayan design that’s prevalent among ROG products. The box then rolls out, much like a carpenter’s tool or surgeon’s instrument bag, to reveal the ROG Phone and its different accessories.

Aside from the phone itself, the ROG Phone comes with the AeroActive Cooler, a USB Type-C cable, and a USB Type-C charging adapter. While not seen in the photos, as the box we were able to look at was a pre-release package, the ROG Phone will also come with a case for its release in the Philippines. 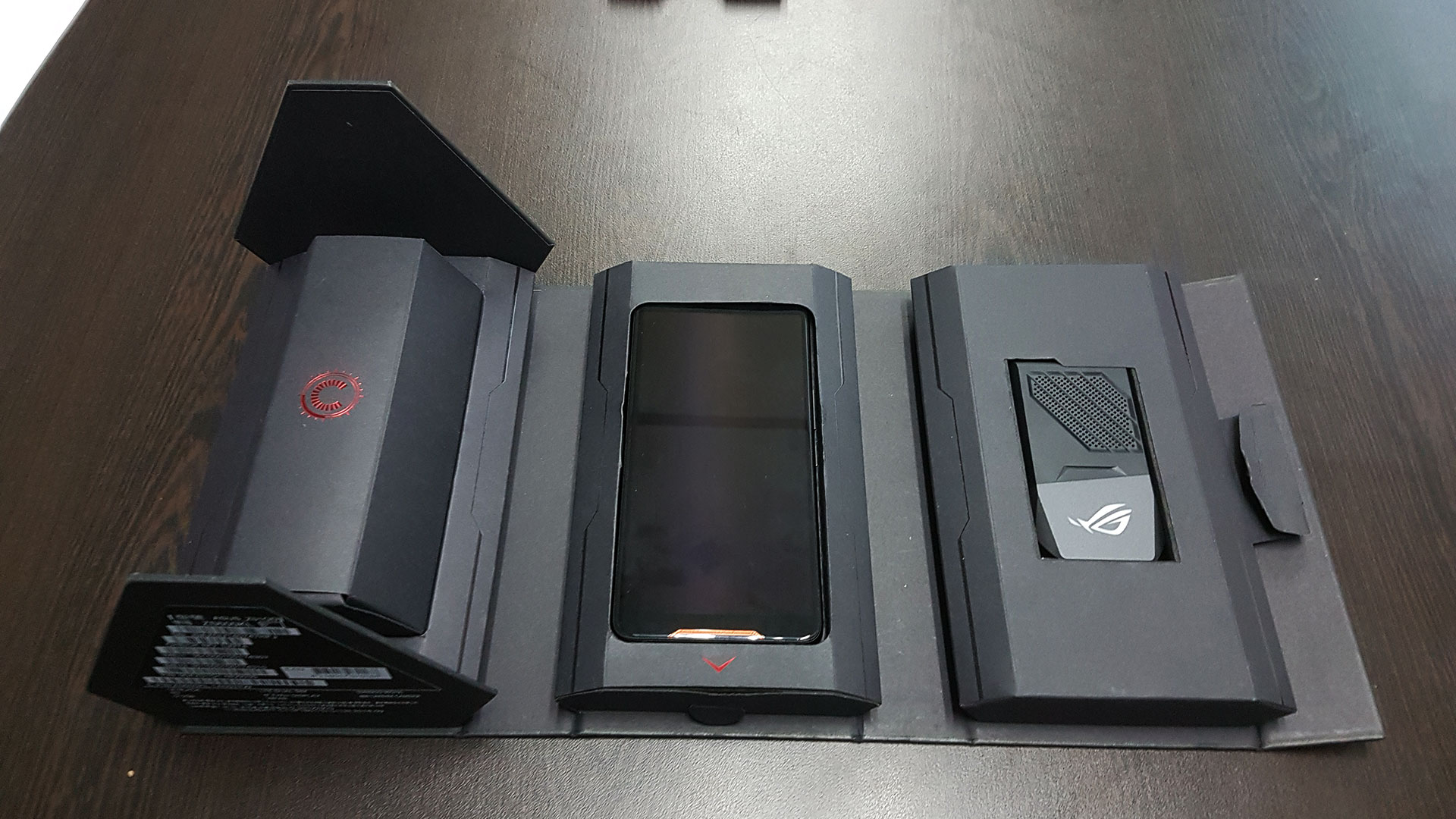 The ROG Phone features one of the most aggressive designs we’ve seen on a smartphone in the current release cycle. While the front of the device is still fairly simple, with equal top and bottom bezels with orange grills for the dual stereo speakers, the back of the device once again features a fairly unusual design.

Instead of having the entire rear covered in glass, a portion of it is covered in metal that’s part of the device’s ROG Aerodynamic System. The rear of the phone also features an off-center fingerprint sensor and dual rear camera system. It’s an unusual configuration that begs the question of how the glass will hold up while featuring a large cutout on its side. 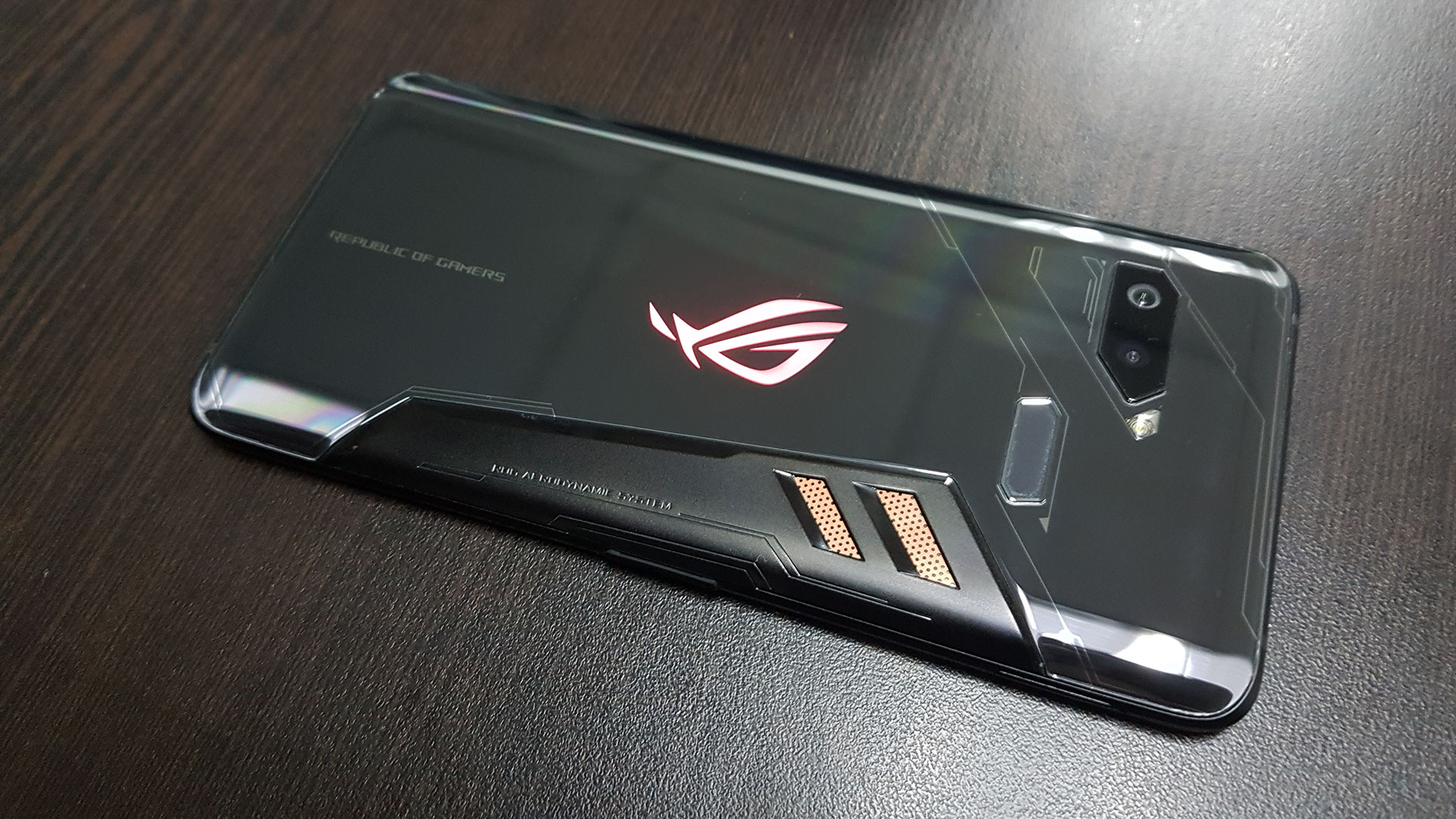 Thanks to the top and bottom bezels on the phone’s front and the chamfered edges of the device’s metal frame, the ROG Phone is pretty easy to hold both vertically with one hand and horizontally with one or two. The phone was hefty enough to grip securely even with its glass front and back.

The ROG Phone’s power button and volume rocker are located on the phone’s right-hand side, to give way to the connector found on its left-hand side for its variety of accessories. The bottom USB Type-C port is also unusually off-center to give way to the device’s stereo speaker assembly, which is a small change for a rather big improvement in audio quality. 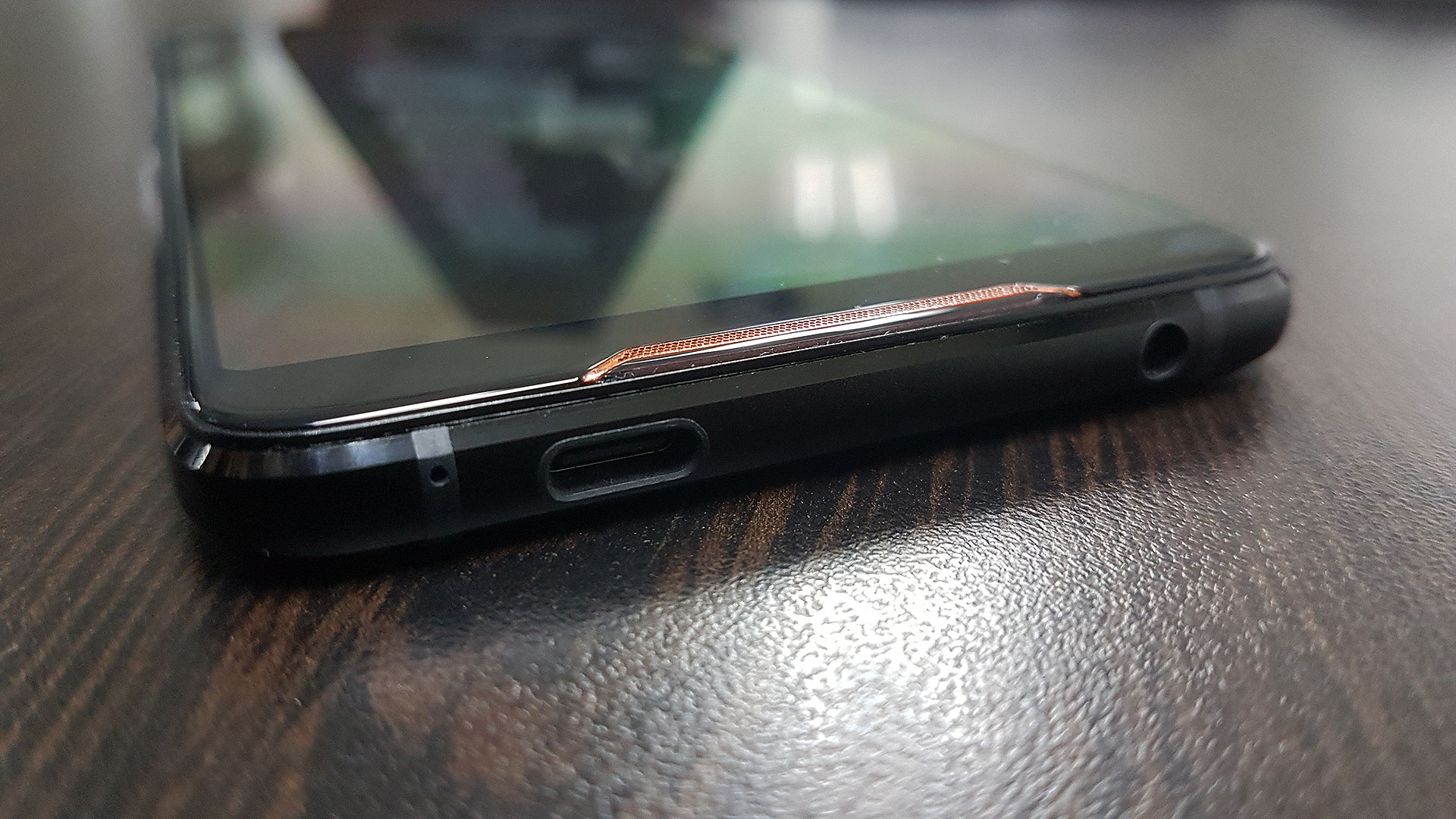 As expected, the AMOLED display on the ROG Phone was definitely impressive. The screen was bright, the colors were vibrant, and details in-game and in videos were sharp. The 90Hz display also made games like PUBG Mobile feel like they looked smoother, although we weren’t able to run a comparison with a similarly powerful phone to really see the difference.

Accompanying the display of the ROG Phone are two large front-facing stereo speakers. Backed by 5-magnet speakers with NXP 9874 smart amplifiers, the speakers on the ROG Phone are some of the loudest we’ve heard on a smartphone so far. It would be interesting to know just how powerful they are when used in a room full of loud people. 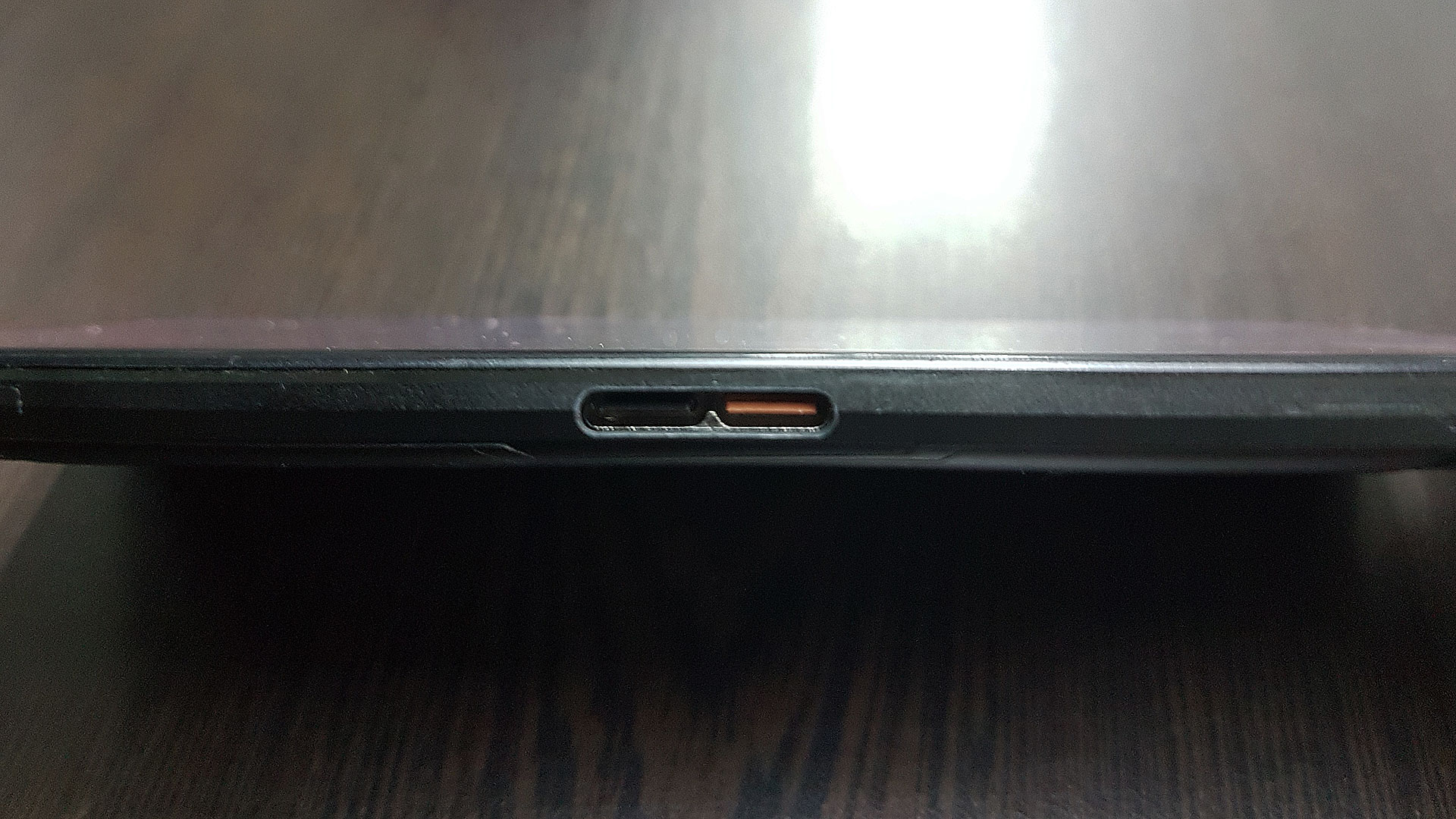 As previously mentioned, the ROG Phone is equipped with several ports. There’s an off-center USB Type-C port and a 3.5mm headphone jack on the bottom and another port on the left-hand side of the device that, technically, combines two USB Type-C ports although only one is actually usable with regular Type-C connectors as the other is modified to only be used with the phone’s accessories.

While we weren’t able to test out the whole suite of ROG Phone accessories, we were able to take a look at the included AeroActive Cooler. The accessory extends slightly so it can be clamped onto the rear of the ROG phone and connect to its side-mounted port. Aside from providing additional cooling for the ROG Phone, the cooler also includes a USB Type-C port and a 3.5mm headphone jack making the phone less cumbersome when it’s held horizontally. 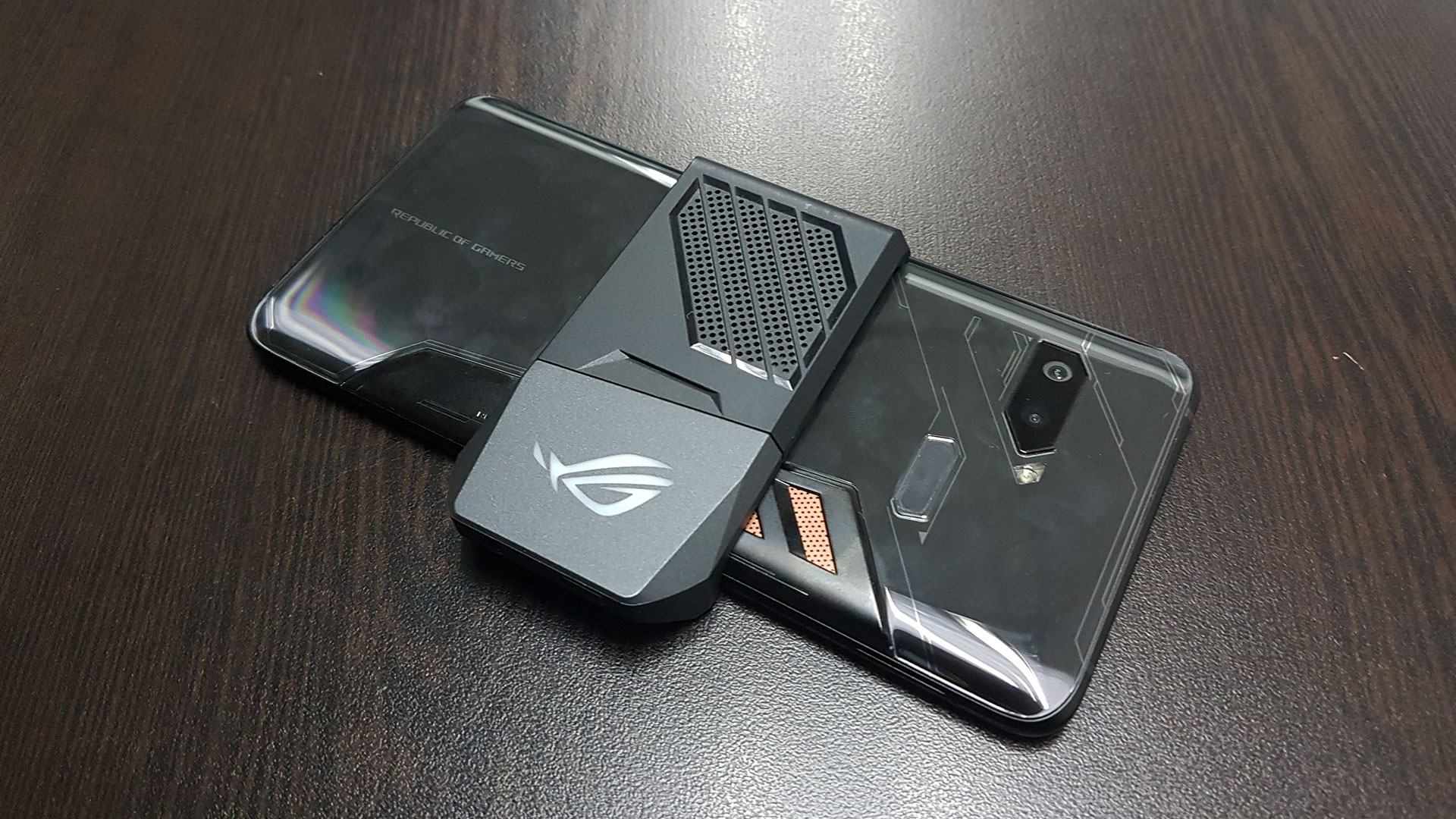 The performance of the ROG Phone was noticeably impressive. While we weren’t able to run benchmarks, we didn’t encounter any slowdowns or performance issues while using the device in the short time we had with it. Loading and running PUBG Mobile was also quick and smooth, respectively, and there wasn’t any noticeable performance drops when we tried it out.

While the ROG Phone’s specifications make it seem like just another high-end smartphone, the feature truly sets it apart, apart from 90Hz display, is its innovative AirTriggers. The ROG Phone includes two AirTriggers on its right-hand side, that act as psuedo-shoulder buttons for games. Something that’s been desperately needed in mobile gaming for the longest time.

The AirTriggers on the ROG Phone were shockingly responsive and the haptic feedback when they’re “pressed” helped make them feel more like actual buttons. While they may take a while to get used to, they represent an innovation in mobile gaming we haven’t seen in awhile and something that could progress the platform significantly.

ASUS has also made it so that the AirTriggers are easily compatible with most games as they can be programmed to simulate taps on the display, so users need only place where the simulated tap will be performed once an AirTrigger is pressed to make them work with many games, although the company is working on built-in compatibility with a number of games as well.

Overall, we were really impressed with the ROG Phone, in spite of the short time we had to check it out. Not only does it provide a high-end smartphone experience, it also provides what could potentially be the best gaming experience on a smartphone. And while we’re not the biggest mobile gamers, we’re excited to know that ASUS is genuinely innovating in a segment where hardly anyone else is.