The Recap: The Pinoy Gaming Festival 2013

Last weekend played host to one of the Philippine’s biggest gaming and e-Sports events – the Pinoy Gaming Festival. This year it was held at the World Trade Center in Pasay City, Philippines. From eSports tournaments, booths, raffles, giveaways, promos, cosplay, meet & greets, to concerts, the PGF is the culmination of the Philippine gaming culture. Gamers from all over the Manila and beyond congregated into a single hall to partake and celebrate the community and hobby they love.

The layout of the event was simple and efficient enough, with booths of different sizes spread out throughout the show floor, a gigantic main stage at one of the rear corners of the hall, a smaller stage at the adjacent corner, a small food court, and the middle half of one side of the hall filled with rows of computers for the matches that weren’t scheduled to happen on the main stage. 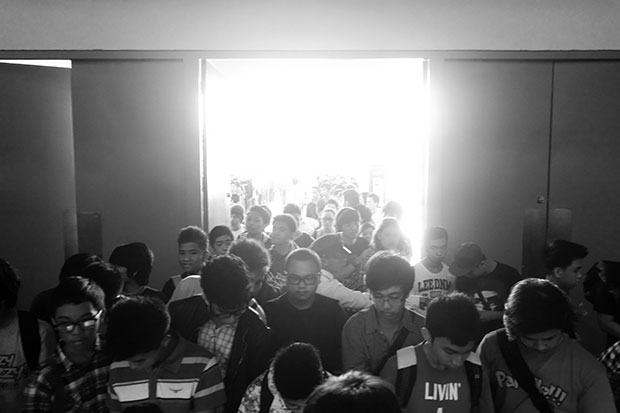 The first waves of attendees entering the show floor.

I realized right away on the first day (Saturday) that I should have arrived earlier if I wanted to take a look at all the booths without opposition because no less than 5 minutes after I had arrived on that first day, the first waves of attendees started swarming the show floor. I was barely able to chat with a few of the people manning the bigger booths before I had to step away to make room for the attendees who wanted to partake of what each booth had to offer. 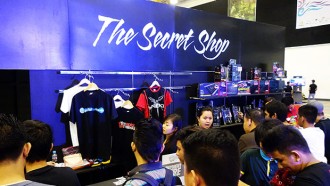 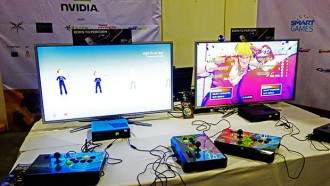 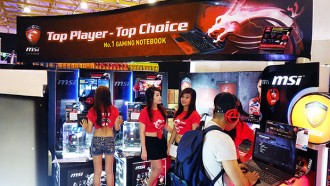 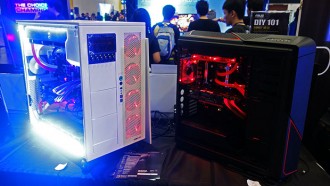 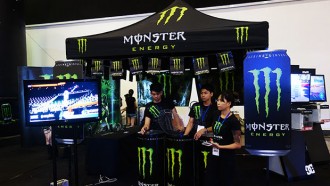 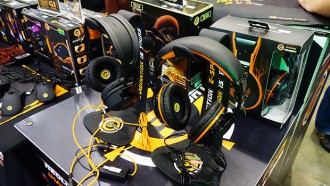 The biggest and craziest setups at the PGF were definitely Nvidia’s booth right in the middle of the show floor and Razer’s stage near the main stage. Both booths had stations to try out each company’s latest tech including the Nvidia Shield and the Razer Blade. Both companies also had the biggest events among the booths with Nvidia holding GPU auctions and Razer having an array of prize-laden activities along with a meet & greet with their chief gamer and CEO Min-Liang Tan and cosplayer Alodia Gosiengfiao during day one and a performance by Ashley Gosiengfiao on day two.

Other notable booths during the PGF were the ones by ASUS which featured custom PC rigs, Asiasoft’s which let people sign-up and get Strife closed-beta keys, and Cosplay Network Philippines’ that held their own cosplay competition. 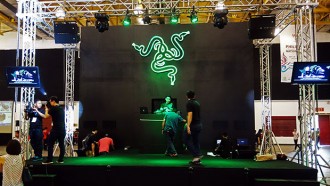 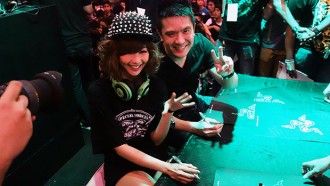 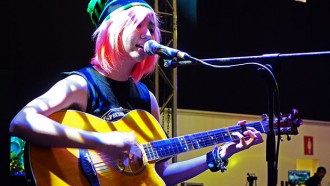 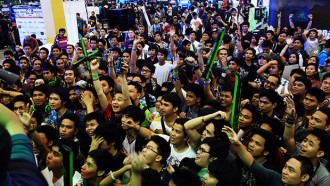 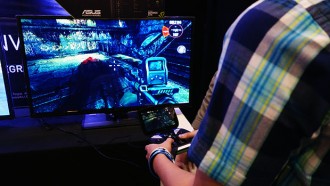 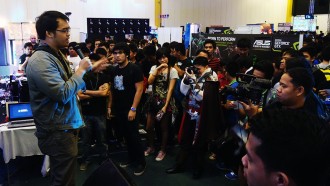 Some booths had activities that included swag giveaways for Liking their Facebook pages, signing-up for a service, or buying their products. The swag included baller bands, lanyards, shirts, posters, and what not. One notable booth was Monster Energy’s booth which gave away up to 2 cans of their energy drink to all the participants which, at least for me, was a god-send for a day full of walking and standing around. I personally was able to snag myself 2 baller bands, 1 lanyard, and made sure I got my 2 cans of Monster Energy.

One of the first main events of the during the PGF was the pro-gamer parade which had all the competing teams in the numerous tournaments during the PGF line up to present themselves to the attendees and have their pictures taken. After the parade, a short speech by Mr. Brad Lee (CEO of the World Cyber Games), and a presentation of awards for the sponsors, publishers, and organizers, the numerous tournaments and activities of the PGF began. 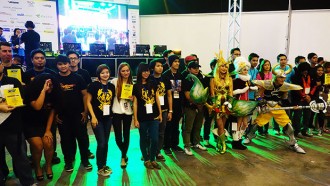 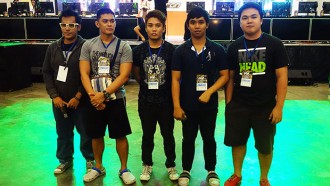 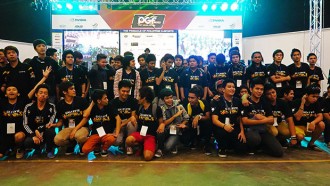 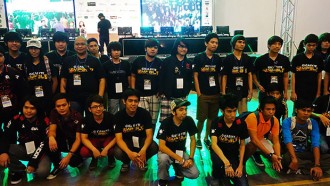 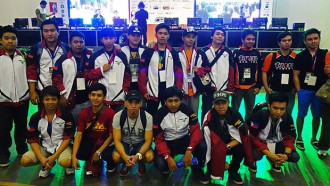 The tournaments held at the PGF included the matches for the WCG 2013 National Finals for Assault Fire, Starcaft II, Super Street Fighter 4: Arcade Edition, and Crossfire, where the winners will represent the Philippines in the WCG 2013 in China. The PGF also had their own invitational tournaments for DotA and Tekken Tag Tournament 2. Lastly, the PGF also played host to the Gigabyte Mineski Pro Gaming League Grand Finals for Counter-strike: Global Offensive, Starcraft II, DotA 2, and League of Legends. We’ve added a list of winners below (credit to Rapture Gaming for the list) for those who are interested in finding out who came out on top at the tournaments at the PGF. 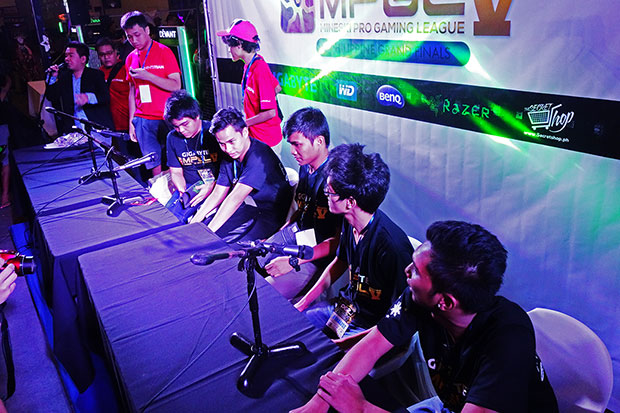 One of the many GMPGL post-match press conferences held at the PGF.

While most of the tournaments were held at different areas of the show floor, a few of them (mostly the grand finals matches) were held at the main stage. The most notable matches were the Grand Finals for Super Street Fighter 4: Acade Edition, DotA, and the Semi-Finals match for DotA 2. These were the matches that had people roaring in cheer and standing up in suspense. Even the Razer stage stopped their activities momentarily just for these matches. 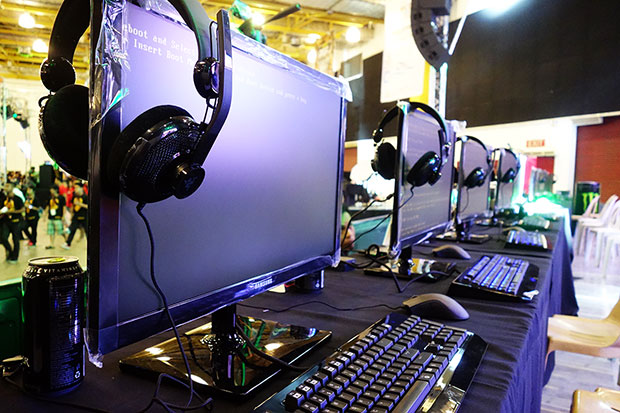 Some of the stations at the main stage.

This year’s Pinoy Gaming Festival was a great success and provides both gamers and non-gamers a good glimpse into the world of gaming and the Philippine eSports scene. And kudos to Rapture Gaming for showing how gaming conventions should be done. I’m looking forward to Pinoy Gaming Festival 2014 and we hope to see all of you there.

List of tournament winners at the Pinoy Gaming Festival: