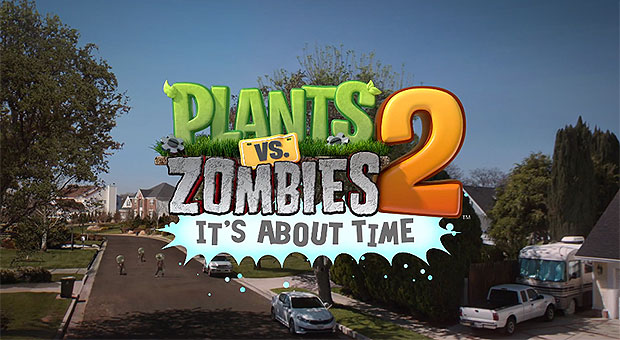 PopCap has announced, in a recent press release, the launch date of the sequel for their popular Plants vs Zombies game. Plants vs Zombies 2: It’s About Time will launch worldwide on July 18 exclusively for iPhone, iPad, and iPod touch.

The sequel will feature new worlds with new levels, plants, zombies and new ways to play that PopCap plan to release on an ongoing basis. All-new touch-screen power-ups that “enable players to ‘break the fourth wall'” will also be in the game.

“We’re confident that players will see the love and attention we’ve put into this game. We’ve created wild new ways to experience the plants and zombies you know and love as well as packing the game with tons of completely new content, and we’re still hard at work coming up with even more cool stuff that will keep Plants vs. Zombies 2 fresh and evolving in the months and years following launch.” said Allen Murray, Senior Producer for Plants vs. Zombies 2.

The game will be free to download through the iTunes App Store once it launches and all the new levels, plants and zombies across multiple worlds will be playable at no cost but players will also be able to purchase upgrades and other in-game items.

Alongside the announcement, PopCap has also released a trailer for Plants vs. Zombies 2: It’s About Time! which you can view below:

It's About TimePlants vs Zombies 2PopCap