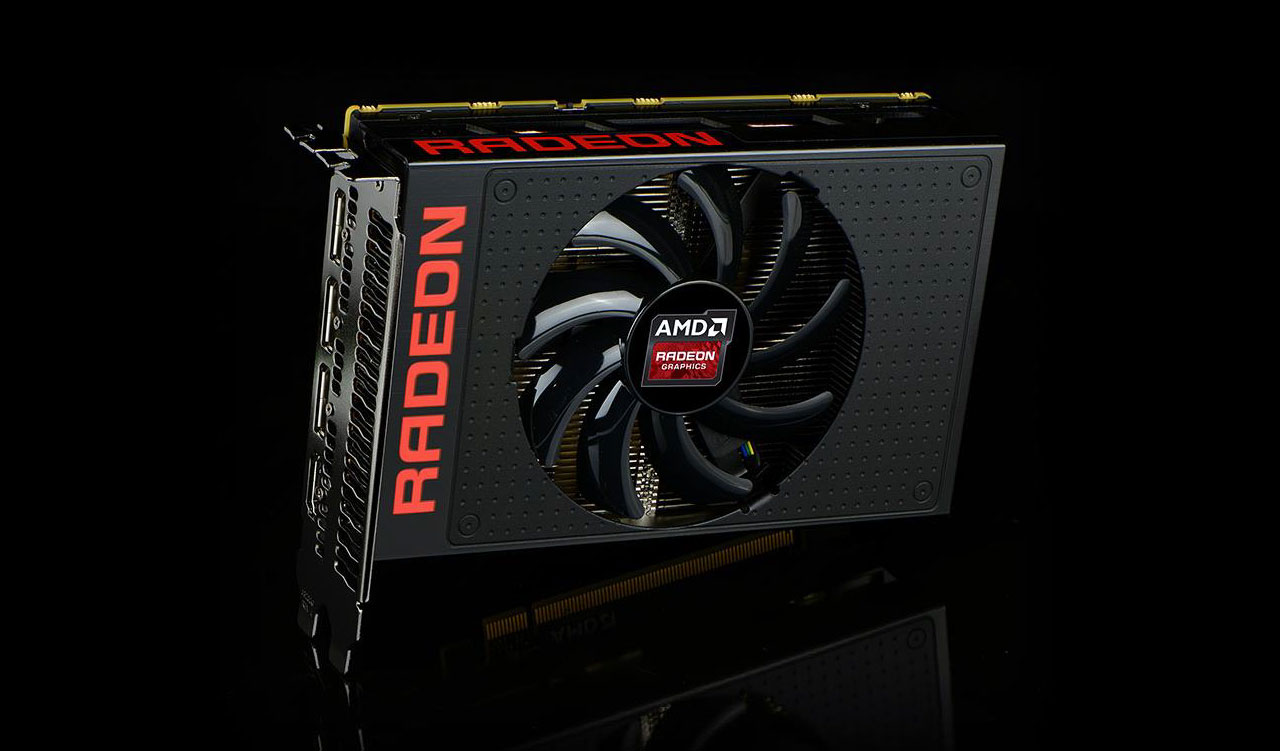 AMD has officially announced the launch of its highly anticipated Radeon R9 Nano video card in a conference call last Thursday wherein the company showed off some of the features and capabilities of its latest GPU.

Some of the information shared during the conference call include details we already know including the fact that the R9 Nano will feature a 6-inch PCB in a Mini-ITX form factor. But what we didn’t know and what surprised us during the conference call is that the R9 Nano is not a budget or entry-level targeted at Mini-ITX builders but actually a high-end card that matches up with the company’s flagship R9 Fury X and acts as the company’s second flagship of 2015. 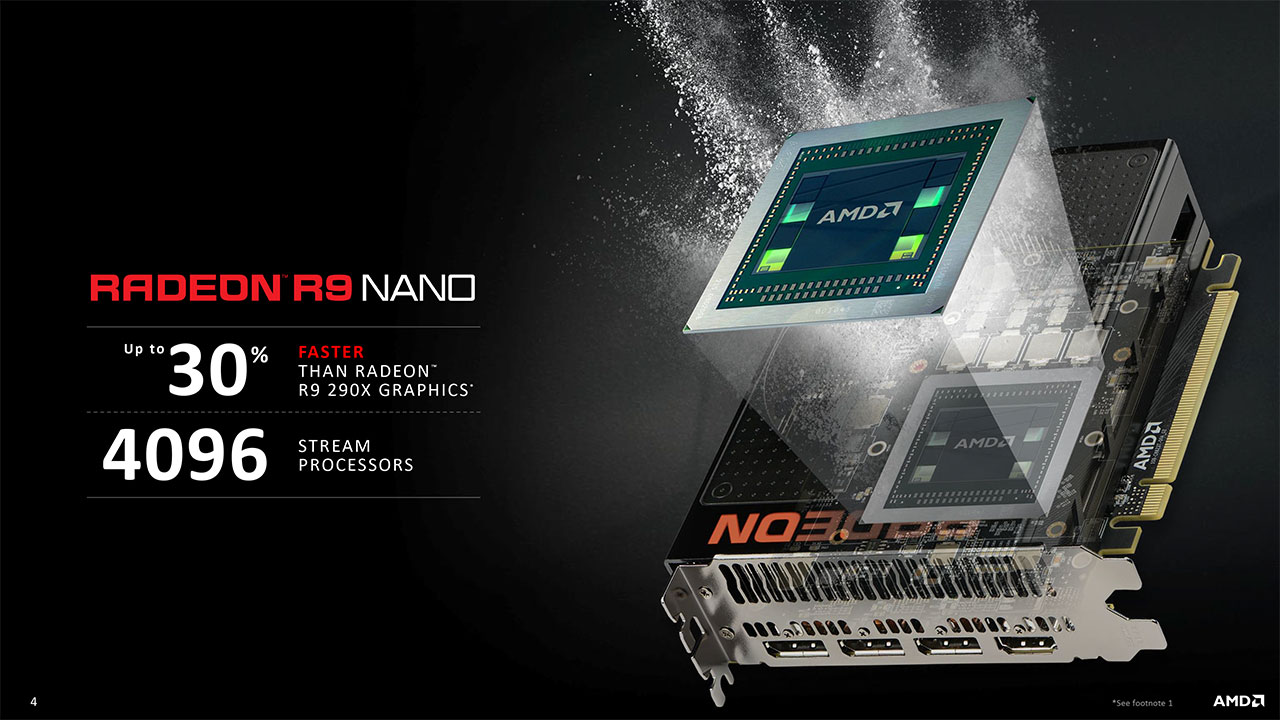 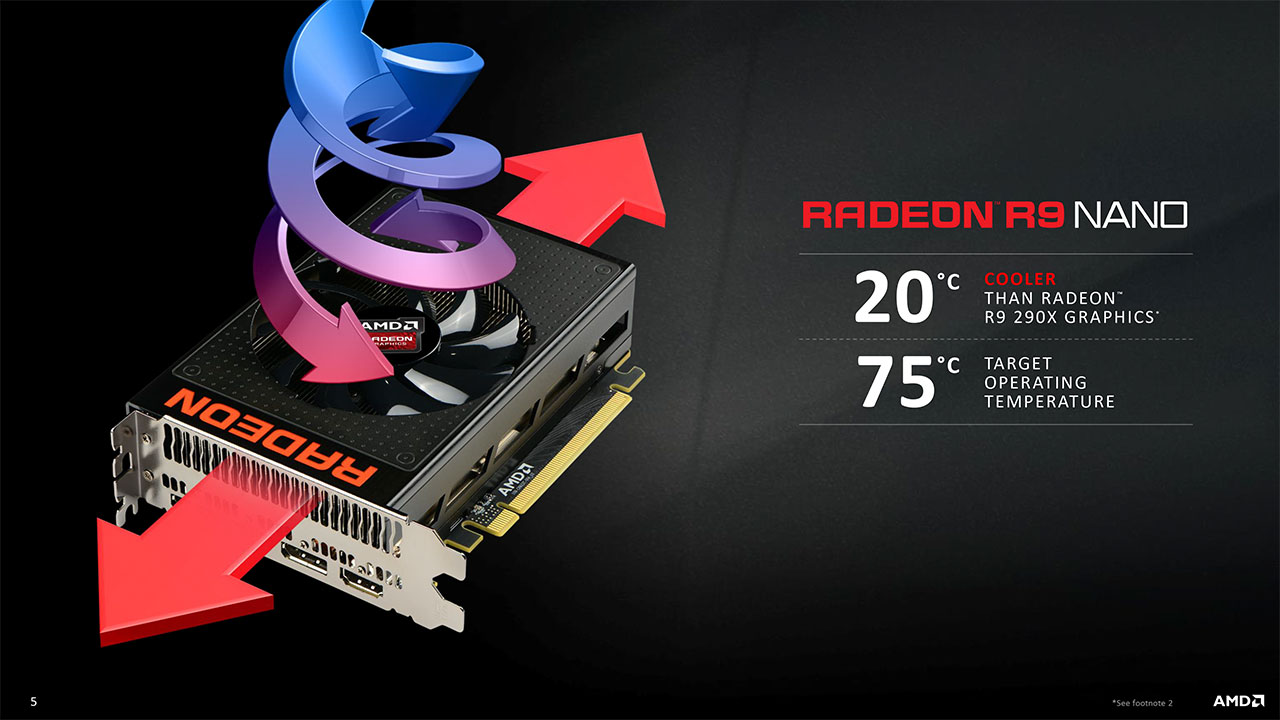 According to AMD, the R9 Nano is 30% faster than the previous generation’s R9 290X and features the same configuration as the Fury X including the 4GB of VRAM and 4,096 stream processors. Even with the 40% size reduction of the R9 Nano compared to the R9 290X, it still achieves a standard operating temperature of only 75-degrees Celsius which is actually 20% cooler than the R9 290X. It’s able to achieve this via a three-part cooling system which is composed of a metal cooling tray, a GPU cooler, and the cooling fan.

The GPU cooler on the R9 Nano features a dual vapor chamber configuration as well as an array of flat heat pipes which allows the cooler to have more heat fins. The heat fins are then positioned horizontally which improves the cooler’s air flow significantly. Additionally, the R9 Nano features a dedicated heat sink and heat pipe for the voltage regulator to not only increase stability but also efficiency. The three-part cooling system on the R9 Nano enables it to run at noise level of only 42dB even at high loads. 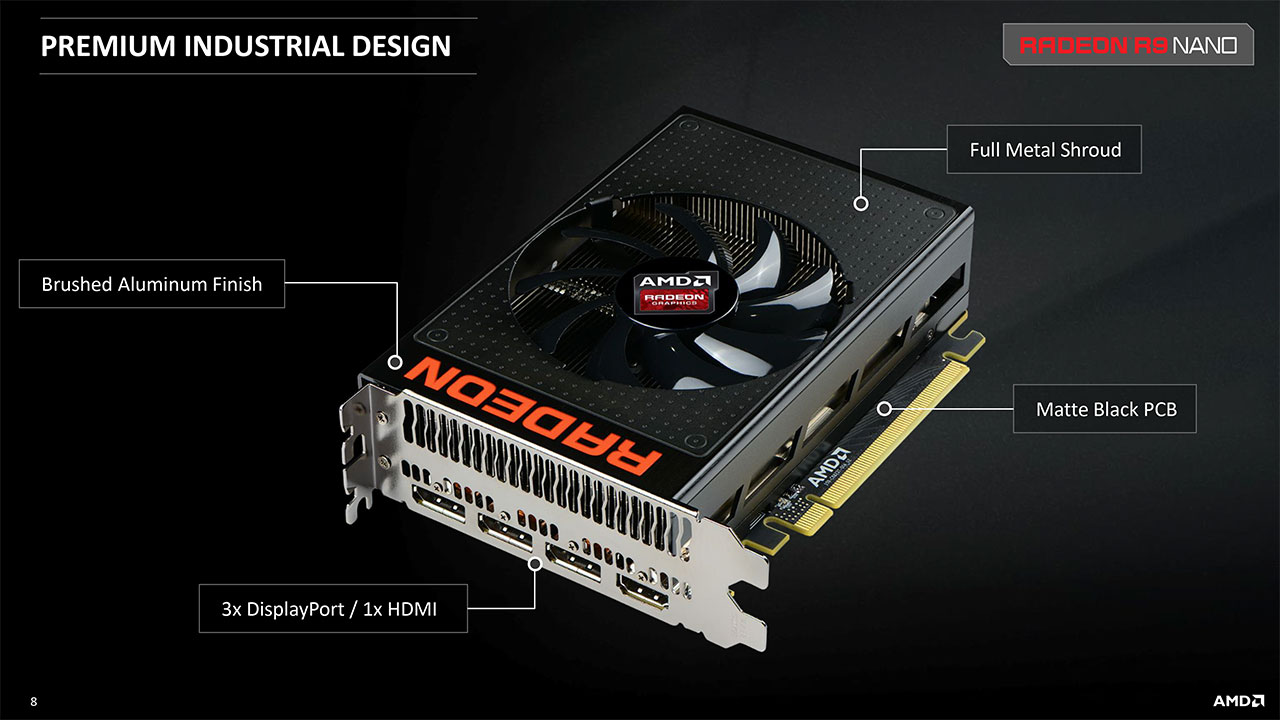 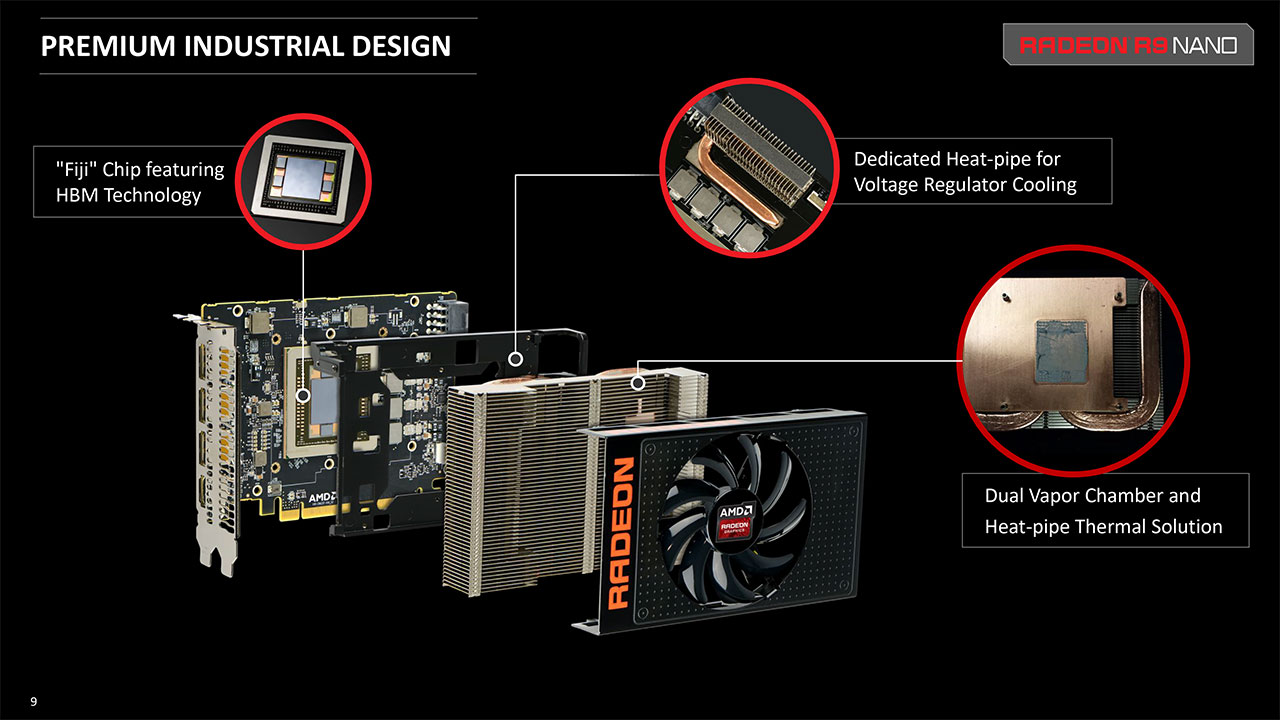 As for power usage, the R9 Nano uses up to 30% less power than the R9 290X. Specifically, the R9 Nano requires only 175 Watts of power giving it up to twice the performance per watt and performance density of the R9 290X. The R9 Nano’s other features include a black PCB, a full metal shroud with a brushed aluminum finish, three DisplayPort 1.2 connectors, and one HDMI 1.4 port.

According to AMD, the R9 Nano is the only 4K-capable Mini-ITX card with its closest competitors only achieving up to high performance in 1440p resolutions. AMD benchmarks reveal that the R9 Nano is 30% faster than the GTX 970 Mini in 4K performance with the R9 Nano capable of achieving frame rates as high as 60fps in 4K in Grand Theft Auto V. 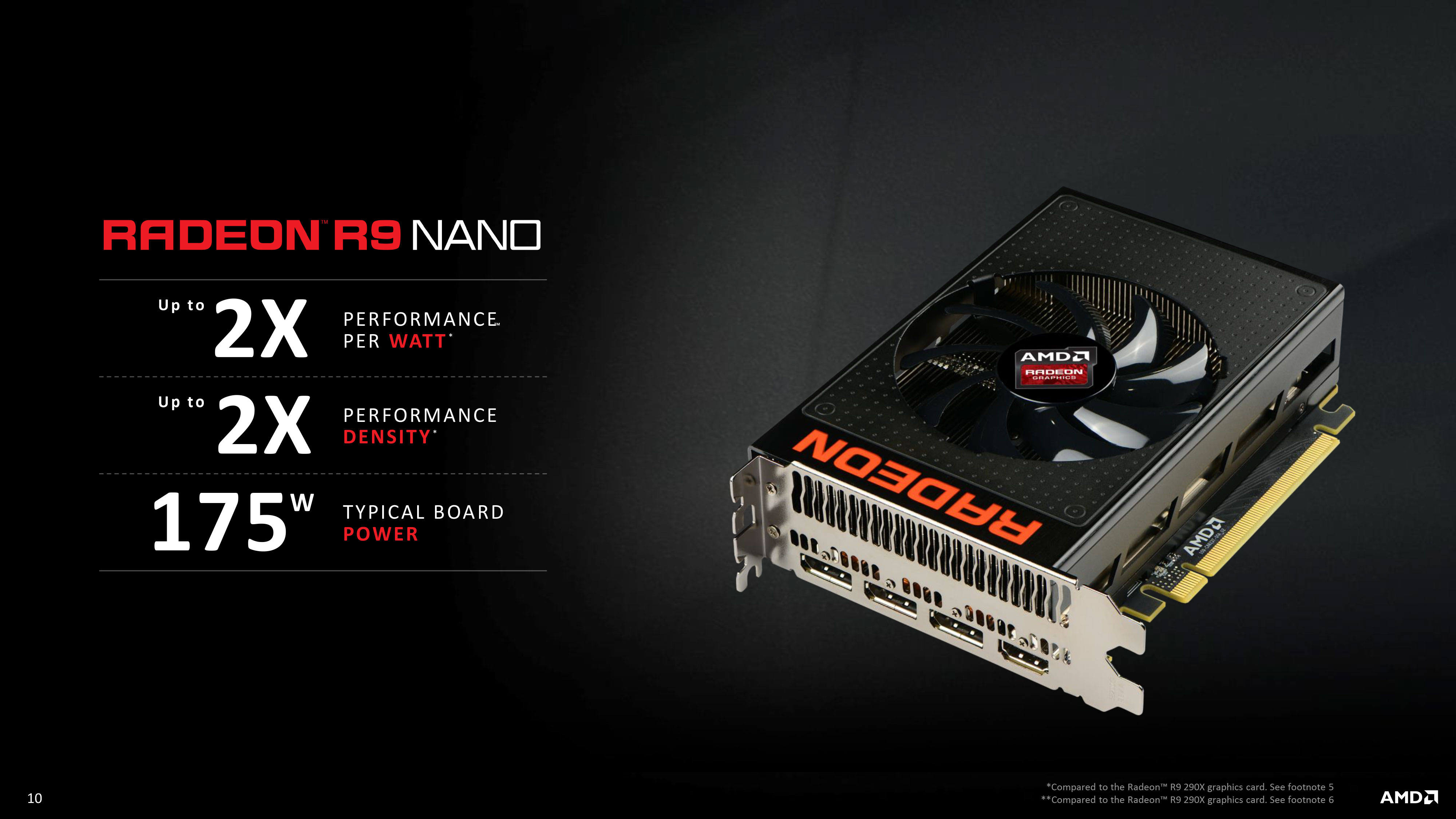 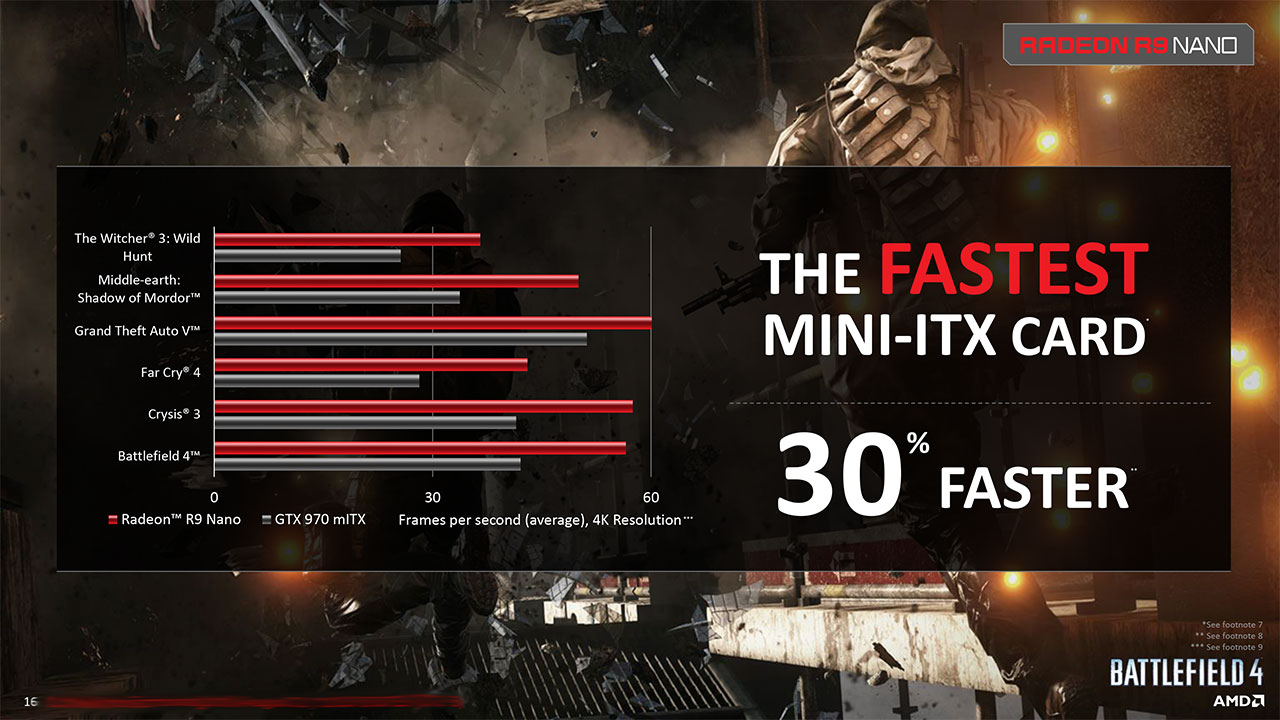 With the R9 Nano, AMD is bringing ATX performance to the Mini-ITX form factor. The company is targeting the R9 Nano towards a new generation of builders who want to create 4K-capable Mini-ITX systems and the R9 Nano makes that possible.

AMD announced that the reference AMD Radeon R9 Nano should start showing up on store shelves starting September 9 at the same SRP as the Fury X – $649 – while R9 Nano cards from AMD’s partners should start launching later this year. 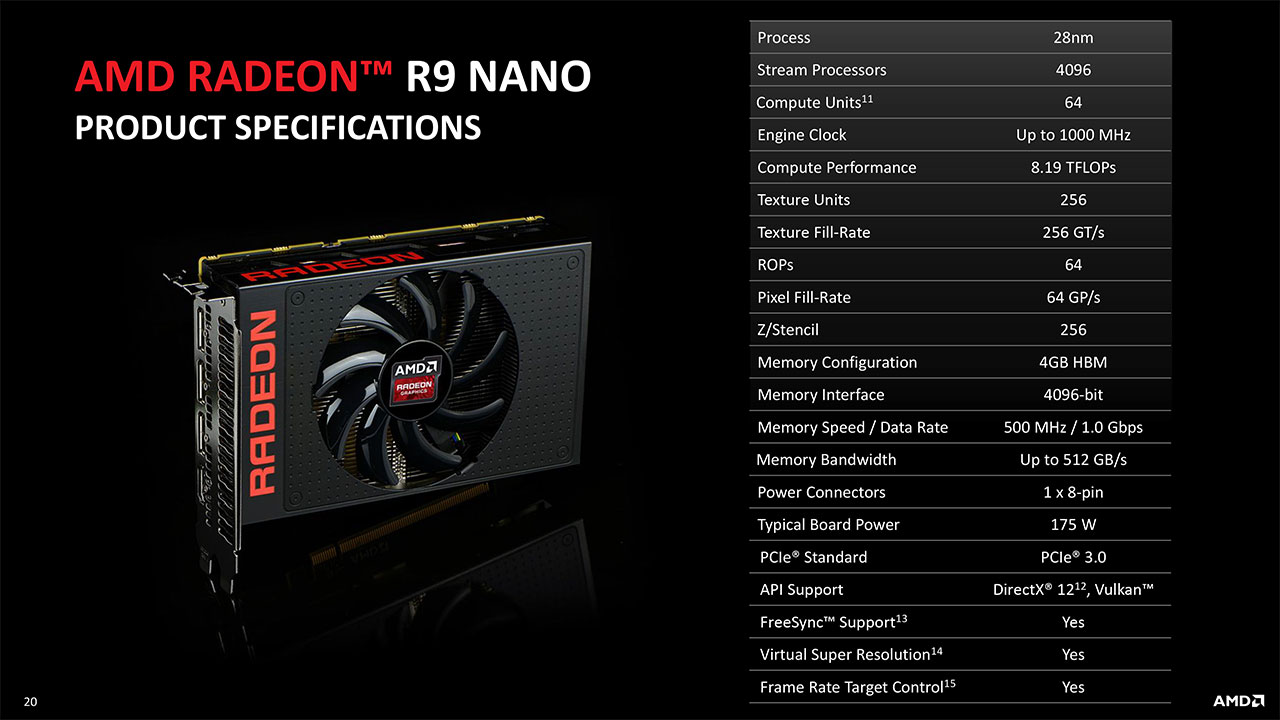