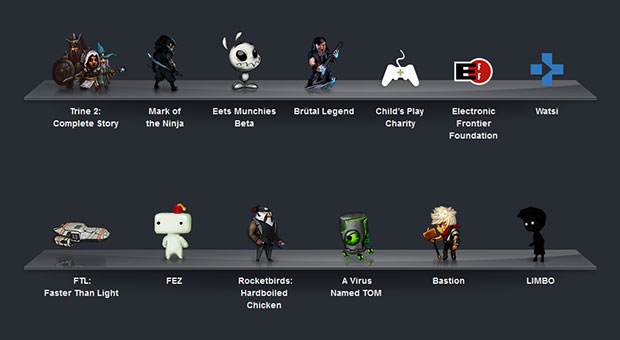 Update: Congratulations to Mr. Dietrich L. for winning our Humble Bundle 9 giveaway. Thank you to everyone who participated and watch out for our future giveaways.

The Humble Indie Bundle 9 have just added Limbo, Rocketbirds: Hardboiled Chicken, Bastion and A Virus Named Tom to the package which increases the number of games interested buyers (and those who’ve already purchased the bundle) can/will get to 10 games.

Buyers can pay as much or as little as they want to get Trine 2: Complete Story, Mark of the Ninja, the Beta of Eets Munchies, and Brütal Legend but paying the current average price will get you the rest of the games namely FTL: Faster than Light, Fez, Rocketbirds: Hardboiled Chicken, A Virus Named TOM, Bastion, and LIMBO. A minimum payment of $1 also gets you Steam versions of the games you get in addition to the DRM-free direct downloads. Soundtracks for some of the games will also be included when you get those specific games.

There’s only a little over 6 days left for this current bundle before another bundle is chosen and released. But if you’re short on cash, don’t have a way to pay online, or just feeling a bit stingy about spending a few bucks, we’re giving away the Steam versions of the whole bundle right here. Just follow the instructions on the Rafflecopter box below to get your chance to win the bundle.