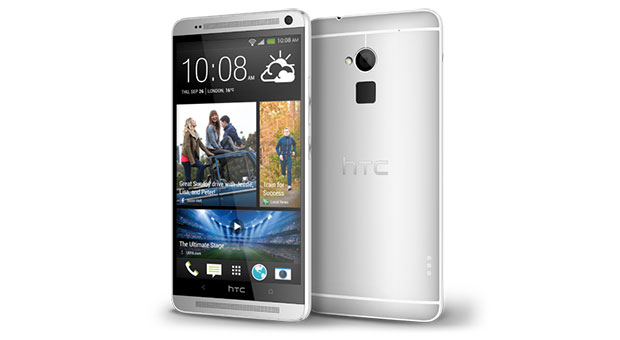 HTC Announces the One Max

It was the phone that everyone knew was coming and the phone that HTC just couldn’t hide. The HTC One’s big brother on steroids, the One Max, has finally been officially announced.

The HTC One Max, while keeping the One’s same look and feel, has a larger screen at 5.9-inches at the same 1080p resolution and is also bigger and heavier at 164.5 x 82.5 x 10.29 mm and 217 grams respectively. The front still features HTC’s BoomSound speakers and the rear still sports the same UltraPixel camera.

Other than the larger display, HTC has also placed a fingerprint scanner on the rear of the One Max which lets you unlock the phone and, according to HTC, launch your favorite apps with a swipe of your finger. HTC also added a MicroSD slot under the now removable back cover so you can expand the One Max’s storage up to an extra 64GB. The One Max also has a beefier battery with a capacity of  3300 mAh over the One’s 2300 mAh.

One area where HTC did seem to neglect upgrading is the One Max’s processor which is the same Snapdragon 600 processor from the One instead of the newer and more powerful Snapdragon 800. Hopefully the older processor is able to keep up with the One Max’s bigger screen.

The One Max will run the new Sense 5.5 UI which adds more customization options to BlinkFeed and a slew of new features. HTC has also released a First Look video for the HTC One Max which you can view below:

Storage: 16GB (internal), expandable up to 64GB with microSD card