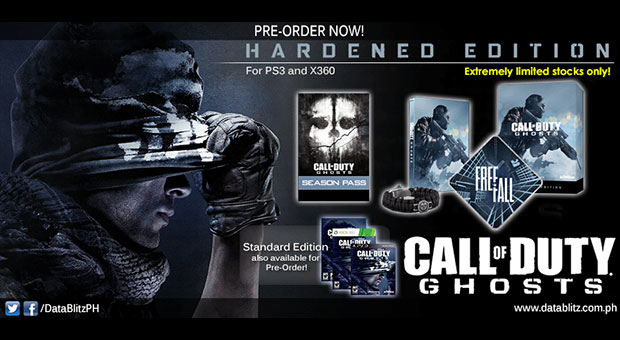 Have you pre-ordered your copy of Call of Duty: Ghosts? If you haven’t (or if you want to pre-order another copy), Datablitz is still accepting pre-orders for the PS3, Xbox 360, and PC versions of the next installment of the award-winning Call of Duty franchise.

Interested parties may pre-order either the Hardened or Standard Edition of the game. The Standard Edition of the game only comes with the game disc and the Free Fall Dynamic Bonus Map DLC while the Hardened Edition also comes with, in addition to the game disc and Free Fall DLC, a Collectible SteelBook, a Paracord Strap, a CoD: Ghosts Season Pass, and a slew of digital content including an in-game Player Patch, Player Card, Player Background, and the game’s soundtrack.

The CoD: Ghosts Season Pass will give players access to four four DLC map packs and the Ghosts Team Leader Pack, which includes a multiplayer character modeled from one of the characters from game’s single player campaign.

Datablitz is charging a pre-order downpayment of Php500.00 for the Standard Edition and Php2,500.00 for the Hardened Edition. Call of Duty: Ghosts comes out on Tuesday (November 5) so pre-order your copy before then. 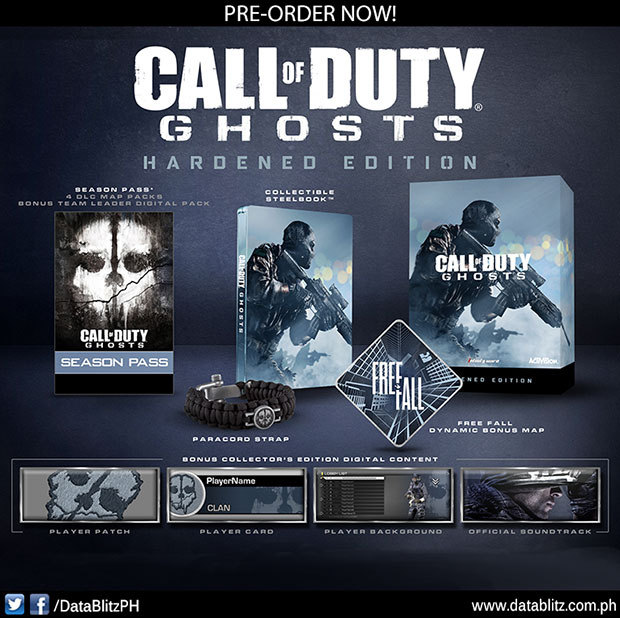