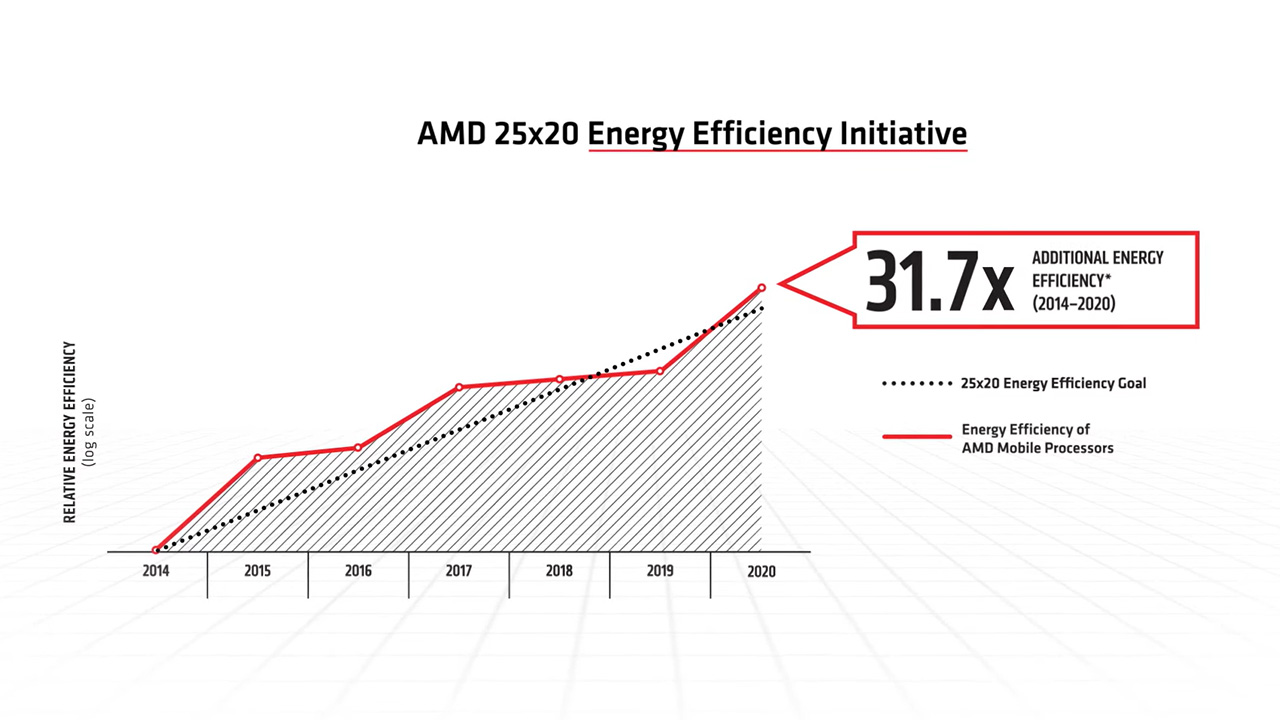 AMD has surpassed the goal it set back in 2014 to improve the energy efficiency of its mobile processors 25 times by 2020. The recent launch of its new AMD Ryzen 4800H mobile processor has improved on its baseline measurement set in 2014 by a whopping 31.7 times.

“We have always focused on energy efficiency in our processors, but in 2014 we decided to put even greater emphasis on this capability,” said Mark Papermaster, chief technology officer and executive vice president, Technology and Engineering at AMD. “Our engineering team rallied around the challenge and charted a path to reach our stretch goal of 25 times greater energy efficiency by 2020. We were able to far surpass our objective, achieving 31.7 times improvement leading to gaming and ultrathin laptops with unmatched performance, graphics and long battery life. I could not be prouder of our engineering and business teams.”

AMD was able to achieve and even surpass its goal by “developing a highly integrated and efficient system-on-chip (SoC) architecture, improved, real-time power management features, and silicon-level power optimizations.” Because of its developments, the company was able to reduce the average compute time for a given task by 80% and reduce energy consumption by 84% at the same time. According to AMD, companies that upgrade from AMD laptops from 2014 to ones released in 2020 would save 1.4 million kilowatt hours of electricity and 971,000 kg of carbon emissions over a three-year service life, which is equal to 16,000 trees grown for 10 years.

“Stewardship of our planet can go hand-in-hand with developing powerful technology and helping our customers achieve their aims,” said Susan Moore, corporate vice president for corporate responsibility and international government affairs at AMD. “The power efficiency improvements we have made within our laptop processors make a difference in the world around us. Reporting publicly each year on progress and ultimately achieving, and surpassing, the 25×20 energy efficiency goal reflects AMD’s commitment to sustainable technology.”

More information on AMD’s 25×20 energy efficiency initiative can be found on the official website.