To Hell With Hell Review (PC) – A Trip Into the Inferno

Let’s get one thing straight here, I am awful at bullet hell games. I couldn’t even play Gradius as a kid, much less a total mess like Touhou where everything that isn’t your two-pixel wide character is out to kill you. Where some people enter a meditative state and just feel the game once the projectiles onscreen outnumber their fingers, I completely lose track of where my character is and proceed to force feed them an entire clip of enemy fire.

That being said,  I may not be the right person to review To Hell With Hell, a fiendishly difficult, top-down, bullet hell dungeon crawler filled with things bent on mutilating the player before the player mutilates it first. It’s a cute idea really, a bullet hell game taking place in literal hell where flesh-eating spiders burst from the pots and giant sized head crabs ooze acid blasts from every pore, but I was picking the easiest baby-mode option and I couldn’t make it past the fifth randomly generated stage. “Anyone can do this. Even you” the description on the difficulty read, and I couldn’t help but think maybe not everyone could do this as I found myself trapped between a firebreathing statue and a gang of shotgun-wielding skeletons for the 12th time.

It IS fun though. Dare I say, fun as hell. You are dropped in buck naked (no really all you have on is a bikini for some reason) right into the depths of the inferno, and apparently dear old Dad is the deposed King of Hell who needs you to bust him out. You’re shown how to use a gun, pick stuff up, and wear masks that give you various abilities powered by your rage (and killing enemies makes you angrier). Then you’re asked to pick between several randomly selected perks, and off you go into the great, bloody unknown. 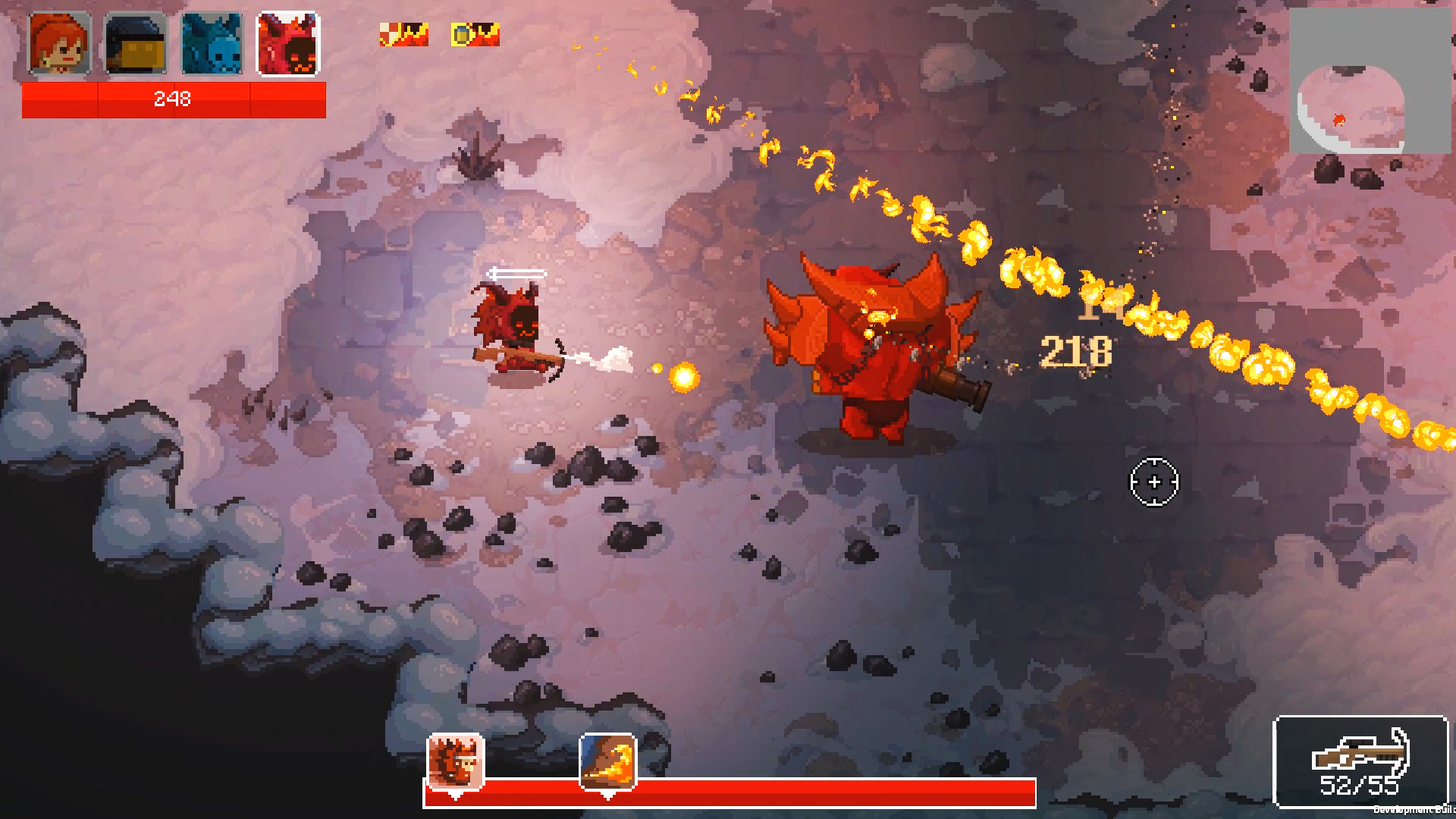 You get limited saves (the easiest mode gives you six) which you can choose between levels, and finding the exit in each level lets you select a new perk to add on to what you’ve already got. You can also go to a shop between each stage to buy more weapons or masks using blue crystals an enemy drops, but you can also find these strewn about a level if you’re feeling cheap.

Gameplay is about as frantic as you would expect. Enemies swarm you in droves while traps spit fire and pots hide even more enemies instead of items. You gotta drop them all, every single one, or the exit portal won’t appear and you’ll find yourself at the mercy of a very powerful enemy that spawns if you take too long. It soon becomes a mess of guts and gumption as you try to wade your way through the sea of bullets and explosions, and it’s all very exhilarating.

I do however, wish there was a way to actually see what the masks do however without having to mouse over the icons and read while your face is being eaten. I’m often left grabbing a new  mask with no information on it except the ability icons it has. This really sucks, because not only are you spending precious rage or bullets to find out what a mask does, but if it happens to put you into a dangerous position, say, rolling yourself into a whole crowd of walking hell-flesh, that could spell the end of your run right there. If there was a way to just hit pause on the action without being taken away to the plain, black, pause menu, that would be great. 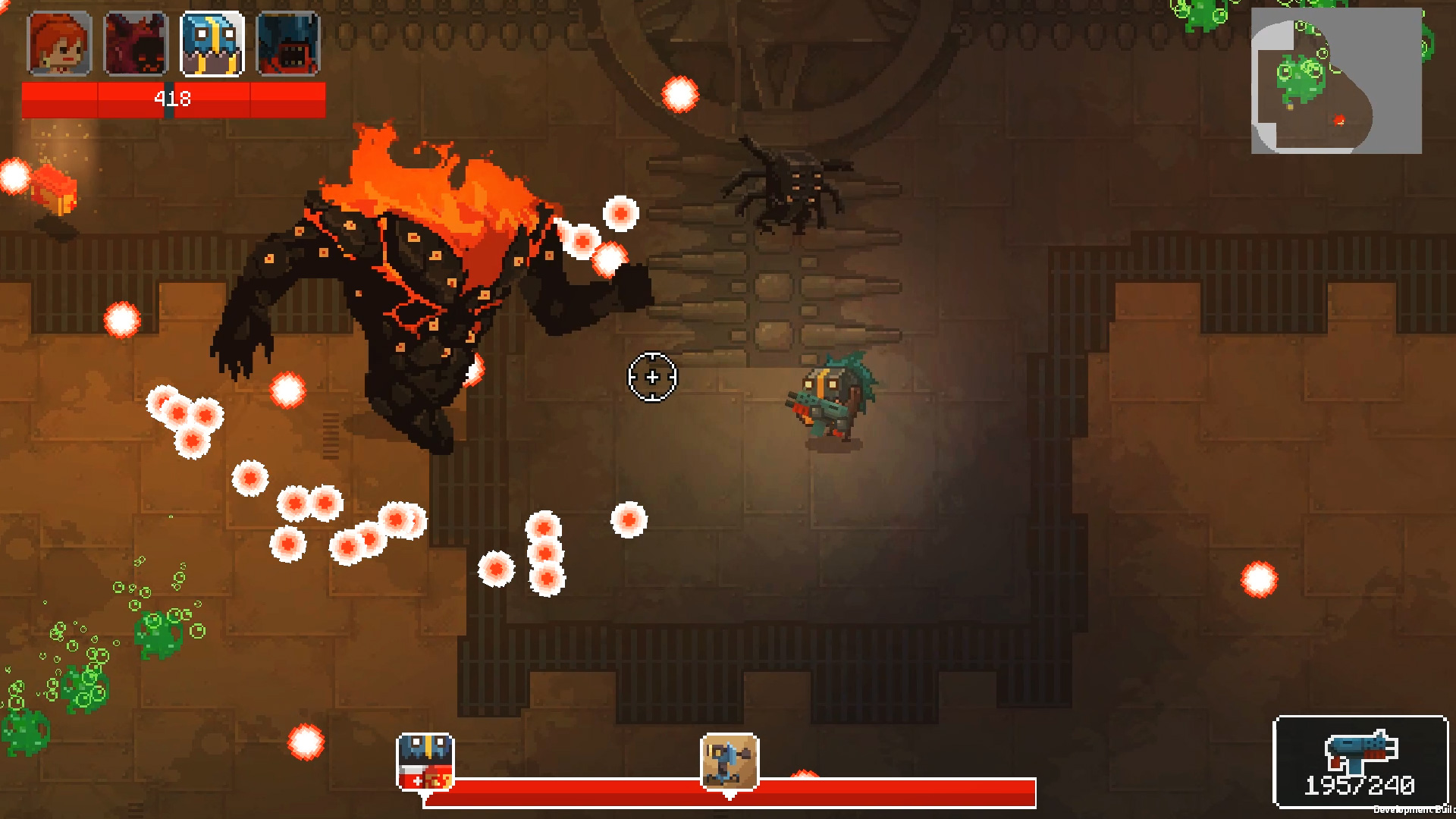 That’s not even mentioning how some of the abilities just don’t seem to be all that useful. The poison mask that’s been central to my run can spawn a clone of me to distract enemies and riddle them with bullets using a weapon I don’t have, but the second ability that costs more rage is a single poison shot, which seems redundant as the mask passively gives all of your bullets poison damage.

Your enemies in hell are also all rather tanky, with some of them being absolute bullet sponges that take an obscene amount of firepower to put down for how much they can fill the screen with death. It can make parts of the game feel rather frustrating, as powerful abilities that make it much easier to kill them are tied to long cooldowns and high rage requirements, and your damage with just regular guns is often very low. If you get screwed by the RNG and don’t get a decent weapon or collection of masks by the time you claw your way to the later levels, you might as well give up on this run and try again with a new one. Oh by the way, you also can’t horde these weapons and masks, which I found to be a real shame, as I feel like that a horde of guns would have made it more encouraging to face these frankly unfair odds.

So that’s To Hell With Hell. It’s a simple game with a simple concept, requiring not-so-simple execution to pull off. It’s fun in short bursts, frustrating after the first seven deaths, and rage-quit worthy when you realize you’ve lost all your good masks and don’t have enough firepower to finish a stage. I do wish the character design was a bit more imaginative (It’s really just a bikini girl that becomes a knight, a clown, a floating eye, etc depending on her mask) and the music isn’t anything to write home about, but if you’re looking for a top down shooter that loves to play dirty, To Hell With Hell might be a good time for you.