Logitech has been quite active with their product releases over the past year, especially in its Logitech G gaming line where the company has released, and at times even re-released, several gaming keyboards, mice, and headsets, covering almost every price category. It was also within the past year or so that the company decided to produce more mechanical gaming keyboards and even went on to release their own mechanical switches, the Romer-G switches. But earlier this year, Logitech released a new set of gaming keyboards that went back to featuring the popular and tried-and-tested Cherry MX switches, seemingly in response to fans who have been wanting the company’s keyboards but were not satisfied with their Romer-G switches. One of these new keyboards is the G610 Orion Brown Mechanical Gaming Keyboard which we’ve been using over the past few months.

The G610 Orion Brown features a design that’s drastically different from Logitech’s previous and even most recent mechanical keyboard offerings such as the G710 Plus, the G410 Atlas Dawn, and the G910 Orion Spectrum. With the G610 Orion Brown (and the previously released G810 Orion Spectrum), Logitech has decided to keep things simple and straightforward. It features a solid, thick plastic case that looks very much like a classic, basic keyboard with no wrist rest and borders that almost hug the keys. The top of the case as well as the keycaps are matte and the sides of the case are glossy, giving the keyboard a sleek and streamlined look.

As for the bottom of the G610 Orion Brown, it comes in the same thick black matte plastic but features a diagonal line pattern instead of being plain and solid like the rest of the keyboard. The corners of the bottom are equipped with large, thick rubber feet and the tri-level elevator feet lets the keyboard sit at either a 0-, 4-, or 8-degree angle to fit a variety of users. The entire keyboard measures only 17.5 x 6.0 x 1.4 inches partially due to its tight borders, making it smaller than other mechanical gaming keyboards and allowing it to fit in almost any desk.

Lastly, the G610 Orion Brown comes with a fixed braided USB cable with a plain black and silver USB connector. Overall, the simple, non-flashy, and streamlined design of the G610 Orion Brown gives it a distinguished yet unimposing look that is rare in today’s era of flamboyant gaming keyboard designs, making it presentable for gaming areas and even an office desks. 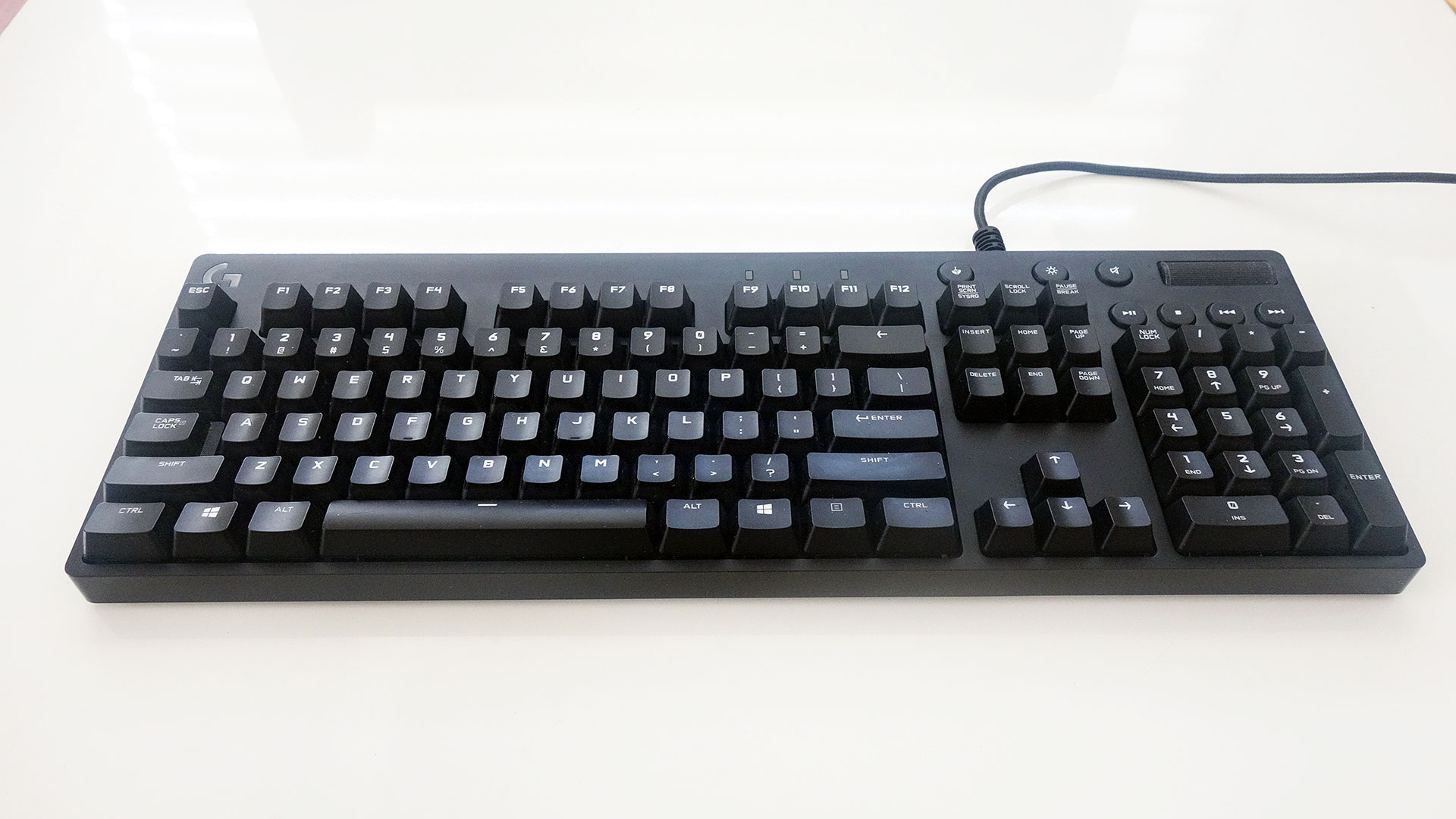 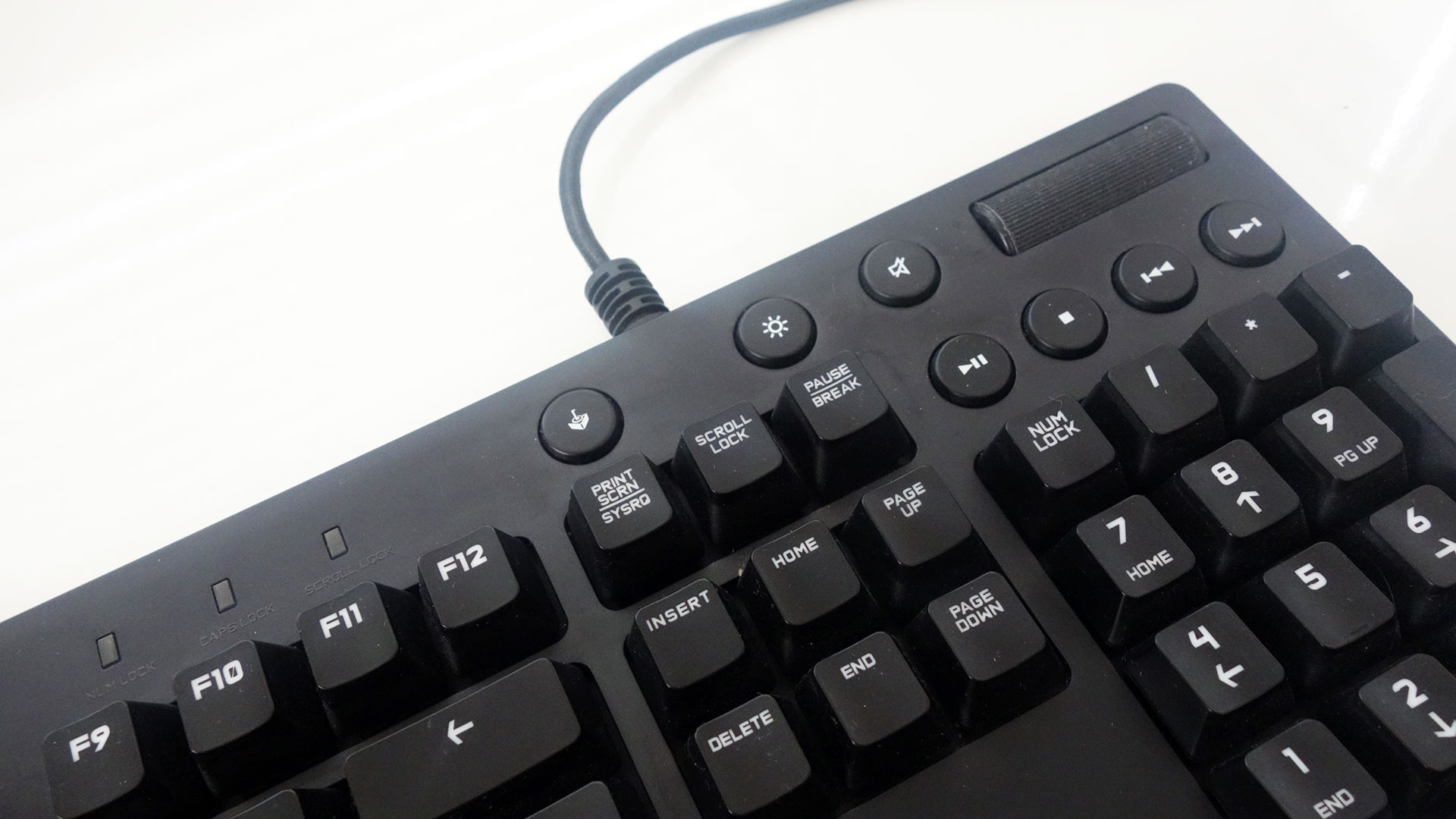 Much like its design, Logitech has kept the G610 Orion Brown’s feature set quite simple, the first and most important of which, as previously mentioned, is the keyboard’s Cherry MX Brown switches. Cherry MX switches are still the most popular and trusted mechanical keyboard switch for both typing and gaming and the Cherry MX Brown, alongside the Cherry MX Red, are still the preferred switches for gaming from the Cherry MX line. Cherry MX’s Brown switches are quiet, actuate halfway down the press, and offer tactile feedback when they actuate. The higher actuation point made using the keys easier, quicker, and less fatiguing for gaming and typing as it was unnecessary to bottom out the switches.

As for the laser engraved keycaps used with the Cherry MX switches on the G610, while not the best available, they are far from cheap and are well and good enough to withstand the abuse of both typing and gaming for a long time. Backing the keycaps are individual white LED lights that are placed off-center right above to the stem of the Cherry MX switches. The brightness of the LEDs are adjustable and can be switched off completely. They can also be customized with different lighting effects such as Breathing, Star Effect, Light Wave, and can even be set to light up on key press. Lastly, Lighting Zones which will only light up certain selected groups of keys can also be set.

While Logitech chose to keep it simple and not add extra macro keys to the G610 Orion Brown, the company complemented its full set of mechanical keys with an LED brightness adjustment key, an audio mute key, a set of media keys, Logitech’s signature volume wheel, and a “Gaming Mode” button that disables keys such as the Windows key to prevent any mistaken presses while gaming. All the extra keys are placed on the upper right side of the keyboard while the key lock LED indicators for the Caps Lock, Scroll Lock, and Num Lock are placed near the top middle. The extra keys as well as the Logitech G logo on the upper right of the keyboard are also backlit. 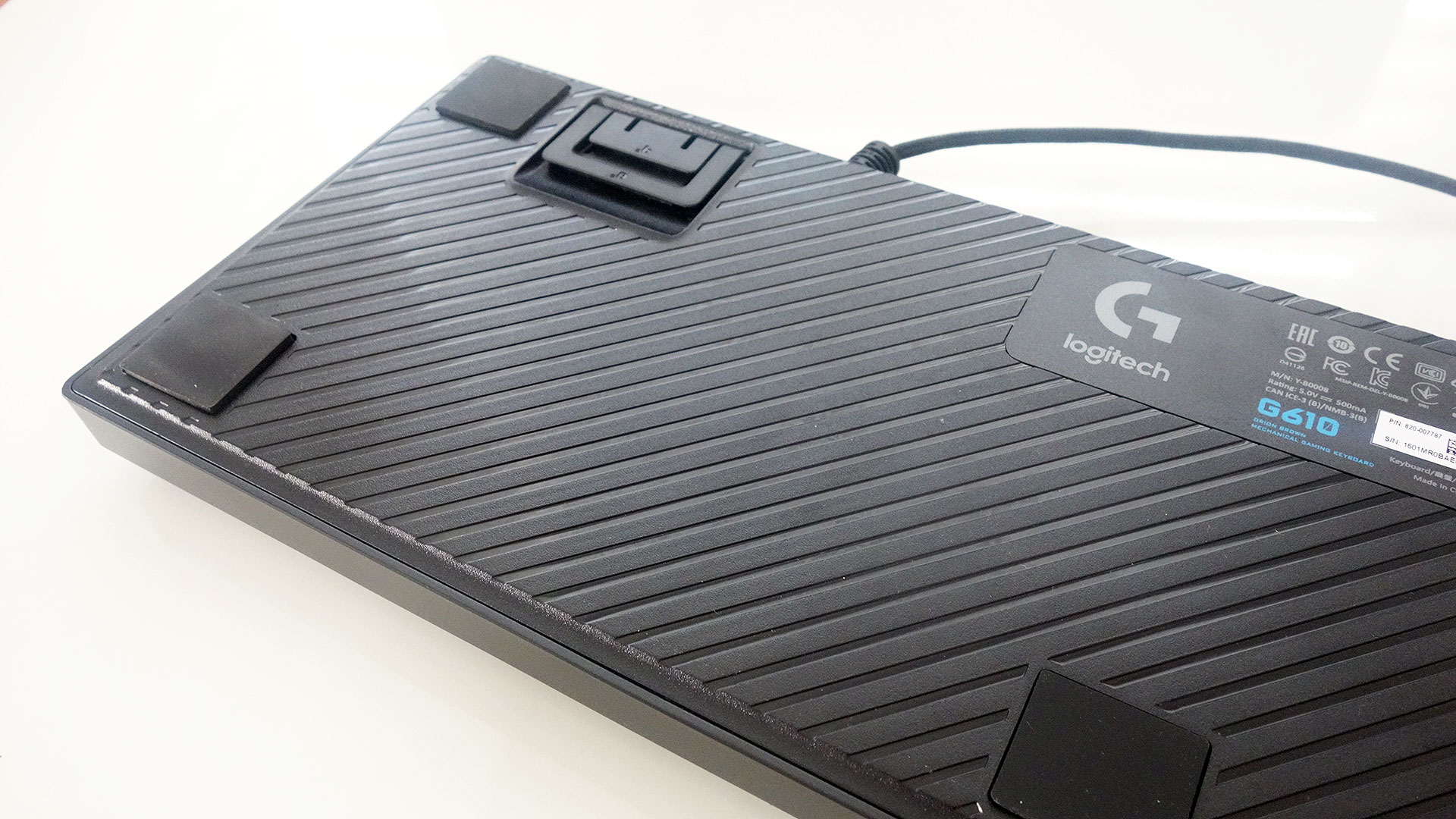 As with the rest of Logitech’s recent product releases, the G610 Orion Brown works with the company’s Logitech Gaming Software where users will be able to adjust the keyboard’s setting including customizing the keyboard’s Function keys to work as macro keys, customizing the LED backlighting settings and effects, setting which keys will be disabled when the “Gaming Mode” key is used, and there’s also an Input Analysis feature that lets you track your keypresses to find out which keys you press the most or press the longest.