You don’t really hear the words “wireless” and “gaming mouse” in a single sentence all too often. Issues with latency and reliability have previously kept wireless peripherals from being more popular in the gaming circles. But recent technology has changed the wireless landscape so much that manufacturers have slowly pushed wireless peripherals to the forefront. The G602 is Logitech’s latest foray into the wireless gaming mice and I got the chance to test drive this mouse for a few weeks to see if it’s worthy of having the “gaming” moniker.

At first look, the G602’s design is attention grabbing. It features an array of textures and surfaces meshed into a great looking device. The G602’s upper palm rest is made from textured rubber; the side and lower palm rest are covered in textured plastic; the buttons are a mix of smooth matte and gloss plastic; the scroll wheel is made from rubber; and grey glossy plastic trim surrounds the rubber palm rest, buttons, and scroll wheel. The mouse is also ergonomically shaped to suit right-handed users (sorry lefties) with its recessed left-hand side and accompanying thumb rest. 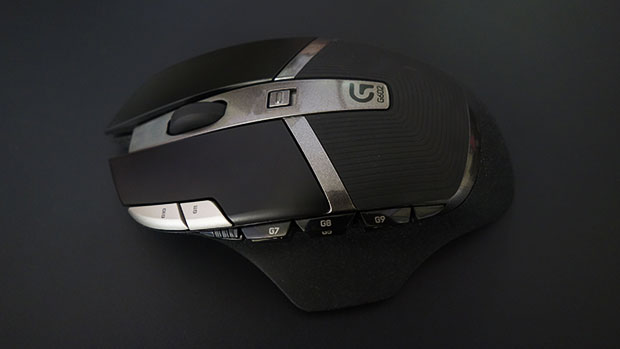 The G602’s multi-textured surface is pretty clever – the rubber upper palm rest gives enough grip without sacrificing comfort, the smooth mouse buttons make resting your fingertips on them for an extended period of time comfortable, and the textured surfaces make the G602 easy to grip for better control and precision.

The top of the mouse has small switch that lets you go between the G602’s Performance and Endurance modes and an LED light shows you which mode you’re on as well as how much battery life the G602 has left. There is also a small set of LEDs on the side of the mouse that tells you which DPI setting you’re on. The bottom of the mouse has Logitech’s new Delta Zero sensor as well as a switch that lets you turn the mouse on & off. It’s also where you’ll find the mouse’s battery compartment – the G602 uses 2 AA batteries but can actually run on only 1 AA battery. 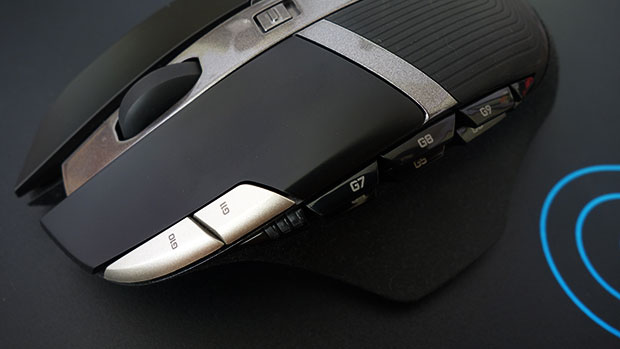 The G602 connects to your PC via the included 2.4GHz USB wireless dongle. There’s also a receiver extension cable so you can position the dongle better for maximum connection quality. The wireless dongle has an extremely small footprint which, especially when used with a laptop, makes it a “plug-and-forget” device.

Overall, the G602’s design is both purposeful and attractive. The way the buttons are laid out and the multi-textured surface combine elements of both function and design. It’s obvious that Logitech set out to make a product that’s not only aesthetically appealing but also very ergonomic. 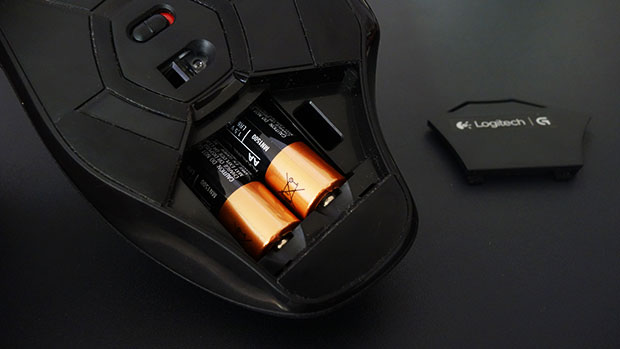 As with Logitech’s other G-series peripherals, the G602 works with the company’s Logitech Gaming Software where users can setup and customize all their Logitech G-series products. Using the software with the G602 lets you create and/or modify profiles and save them either on the mouse’s on-board memory or on your computer.

The G602’s on-board memory is limited to one profile while you can save multiple profiles on your computer and assign them to specific applications or games. The button customization on the on-board memory profile is also limited to preset mouse functions and keystrokes along with adjusting DPI levels and the polling rate. With profiles created and saved on your computer, you’re able to customize a lot more including per-profile pointer settings, separate DPI settings for your X and Y axis, and enable Pointer Acceleration. 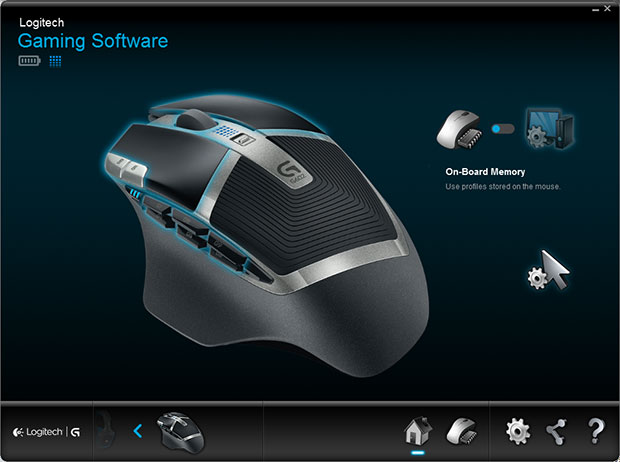 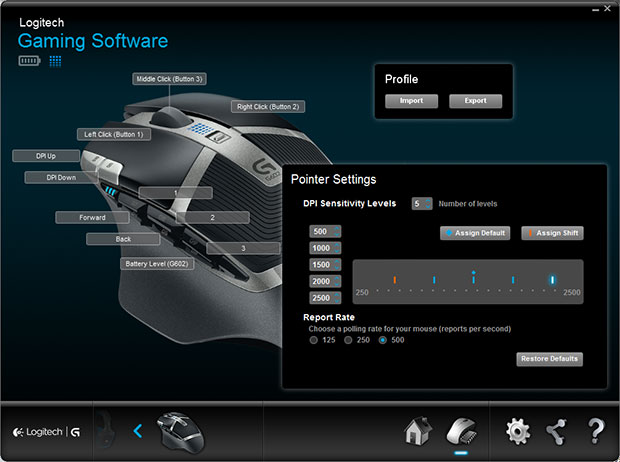 Button customization is also more complex and robust with locally saved profiles. Aside from the preset keystrokes and mouse functions, you can assign the mouse buttons to control media or applications, launch programs, and/or adjust your computer’s audio settings. You can even create your own multi-key macros. And all this functionality and customization can be assigned to specific programs so your mouse profile automatically changes when you switch programs.

Logitech has made managing all these settings through the Logitech Gaming Software pretty easy and straightforward. And having all your G-series devices run on the same software is convenient. The Logitech Gaming Software also runs pretty fast compared to other gaming peripheral software I’ve used. The one thing I would want to see from Logitech is an update to their software that would allow saving of profiles to the cloud. It would enable users to easily backup and restore their profiles when necessary. 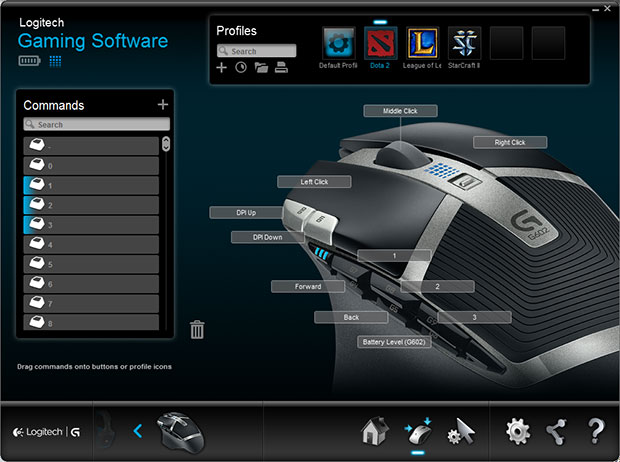 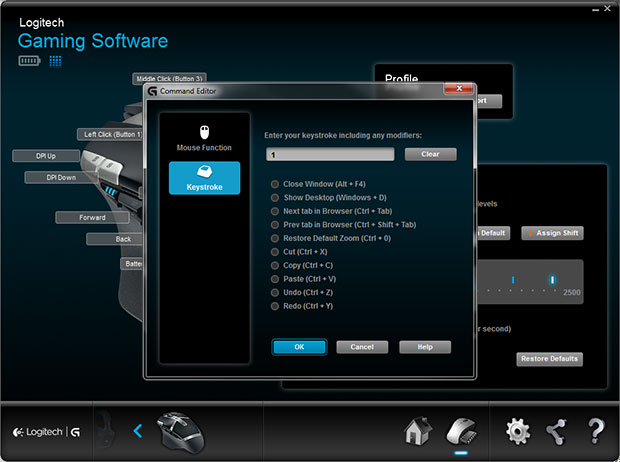 As previously mentioned, the G602 is capable of reaching a maximum DPI of 2500 and a maximum polling rate of 500MHz. This is probably where the G602 falls a bit short of its competition with competing mice reaching DPI numbers as high as 8400 and double the polling rate at 1000MHz. In spite of this, the G602 performs nicely with very little difference in responsiveness when compared to mice running at 1000MHz.

The maximum DPI of 2500 is also pretty decent when you consider that most generic mice run at an extremely low 800 DPI. The rest of the features the G602 brings to the table as well as its very competitive price tag make up for the lower specifications. While I personally would prefer a higher DPI, most gamers will find the G602’s performance adequate for any game they use it for. 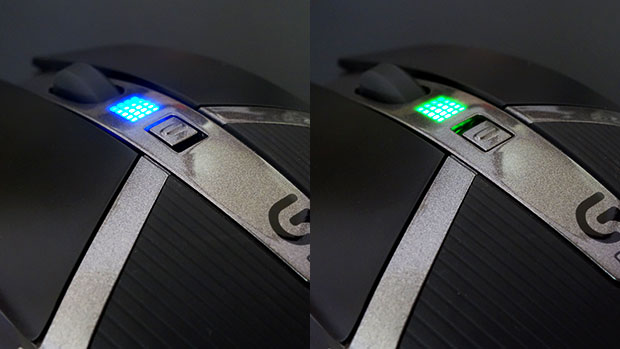 The G602 connects to your computer through a 2.4GHz band wireless connection via the included USB nanoreceiver. Unlike Logitech’s Unifying receivers meant to handle multiple wireless devices at once, the G602’s nonareceiver is fully dedicated to the G602. During the review, I never encountered any interruptions or hang-ups with the wireless connection in spite of having at least a few nearby devices also running connections on the 2.4GHz band. That’s a pretty impressive feat and solves the common issues of interference and reliability with wireless mice.

The G602’s battery life is where this mouse truly shines and rises above its competition. As previously mentioned, the G602 can run on either 1 or 2 AA batteries with a maximum estimated battery life of 250 hours in Performance mode and 1440 hours in Endurance mode. I used the G602 both in Endurance and Performance modes for a few weeks and never needed to change the batteries. That’s really impressive for a wireless device let alone a gaming mouse. 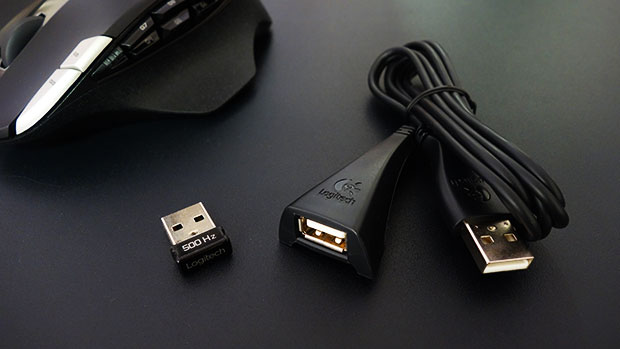 After playing with the Logitech G602 for a few weeks, I can clearly say that it’s a definite winner and worthy of being called a “gaming mouse”. At an SRP of Php3,599.00, the G602 is one of the most affordable feature-packed wireless mice in the market. While it isn’t the most powerful gaming mouse in the market when it comes to tracking and responsiveness, the G602 performs excellently that its shortcomings are easily forgiven and forgotten. The G602’s intuitive design, reliable wireless connection, extensive features, and astounding battery life makes for a great and carefree gaming experience. 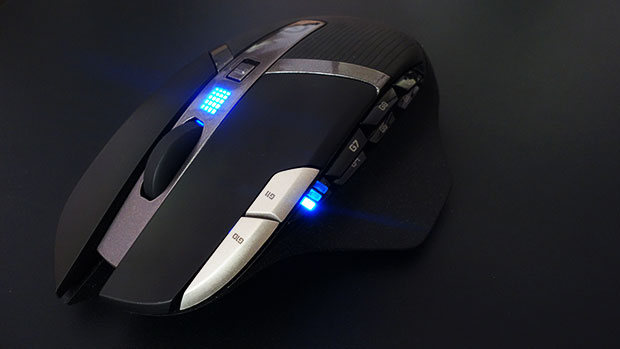