Other than its membrane switches, the G510s comes with a host of other features including an incredibly large number of additional programmable keys; a slew of dedicated buttons for a variety of functions including LED, game mode, and media control; custom RGB backlighting; integrated USB audio; and a GamePanel LCD screen; among others. We got to play around with all of the features of this somewhat daunting keyboard and see if it all adds up to the make the G510s worth its hefty price in spite of its less popular switch technology. 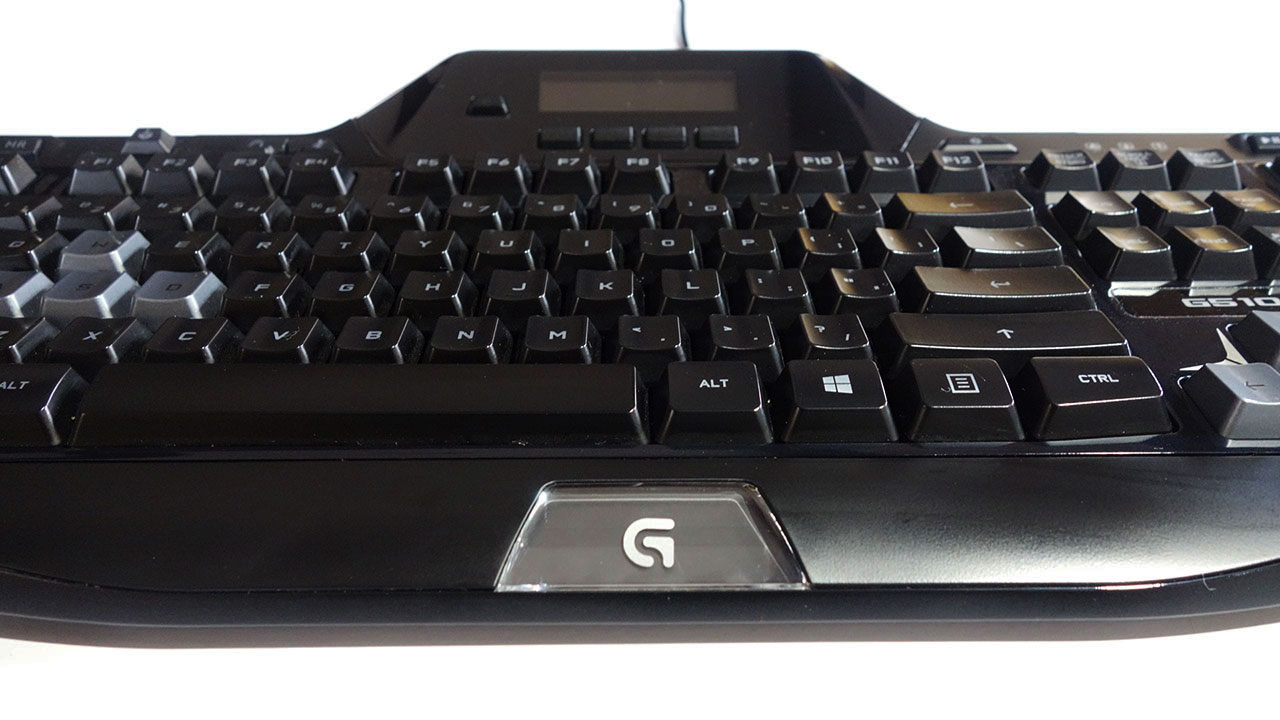 First off, it has to be said that the G510s isn’t for small desks. This keyboard, when the wrist rest is attached, is gigantic. Positioning the G510s on top of our desk took up enough space that we ended up having to set aside a few of the things we usually have on it to make enough room for the keyboard. Additionally, placing it on our desk’s pull-out keyboard tray required me to remove the wrist rest altogether and it barely fit even then. Most of that size is taken up by the 18 additional programmable ‘G-Keys’ on the side of the keyboard as well as the array of controls and the GamePanel LCD screen on the top side of the keyboard.

Since this is a keyboard from Logitech, we expected the company’s signature build quality to be present with the G510s and we were not disappointed. The whole device feels impressively durable and barely gives or flexes at any point. The top of the G510s is made up of a few pieces of hard plastic – a matte black main outer body or frame, a slightly glossy black inner top panel piece, and a glossy blue plastic plate that surrounds the keyboard’s keys. While we generally liked the look and feel of the G510s, the glossy panels were a magnet for fingerprints and smudges and the crevices in between the plates were the perfect place for dust and dirt to get stuck in so regular cleaning is needed if you want keep the G510s looking pristine. The bottom side of the G510s is, as expected, pretty plain with rubber feet on the front side of the keyboard as well as on the bottom of the wrist rest. On the rear are two foldable feet to slightly raise the angle of the keyboard for better ergonomics. 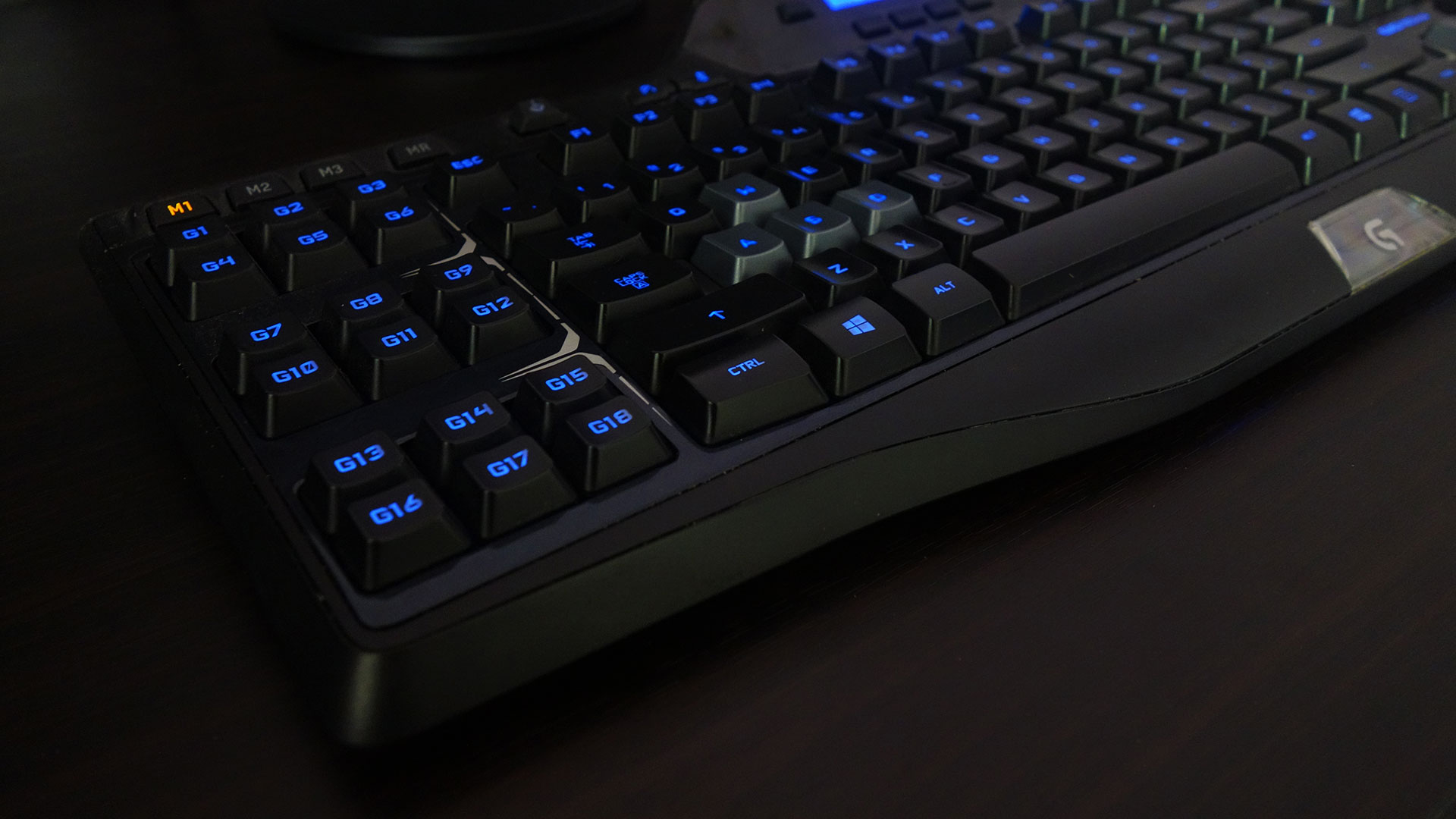 As previously mentioned, the G510s features a grid of 18 ‘G-Keys’ on the left-hand side of the keyboard. The 18 keys are grouped into three sets and each set is laid out in two rows of 3 keys. This layout makes it easier to find specific keys on the grid and prevent mistakes or mispresses. Through the Logitech Gaming Software, users will be able to configure up to 54 unique functions if you take into account the keyboard’s three quick profile switch buttons which allows you to practically program the up to 54 unique functions or three macros or functions per G-Key. While situations that would require you to use all 54 possible functions are few and far between, it’s still good to know that this amount of customizability is easily available. Additionally, all of the keyboard’s regular keys and G-keys feature customizable lighting.

Above the G-Keys are the three aforementioned quick profile switch buttons that allow you to swap between the three profiles you’ve assigned to them. To the right of those buttons is a Quick Macro button that lets you quickly and easily record a keyboard macro and assign it to one of the available G-Keys. This is done without having to use the Logitech Gaming Software so you won’t need to leave your game and access the software to create and assign the macro.

The next thing on the top side of the keyboard is the Windows Key Lock switch. Weirdly enough Logitech decided to use a slider instead of a button for it which is quite unusual given the rest of the buttons on the keyboard along with the fact that the slider itself seems a bit flimsy which is surprising for something from Logitech. Sliding the switch to the right disables your Windows key and sliding to the left does the opposite. The last thing on the left top side of the G510s are the headphone output & microphone input jacks as well as dedicated mute buttons for both. This lets you directly plug your headset to the G510s, removing the need to attach the jacks to the back of your computer. This works especially well if your headset has a shorter cable or if you’re just trying out a new pair and would rather not go through the hassle of connecting it to the back of your PC. 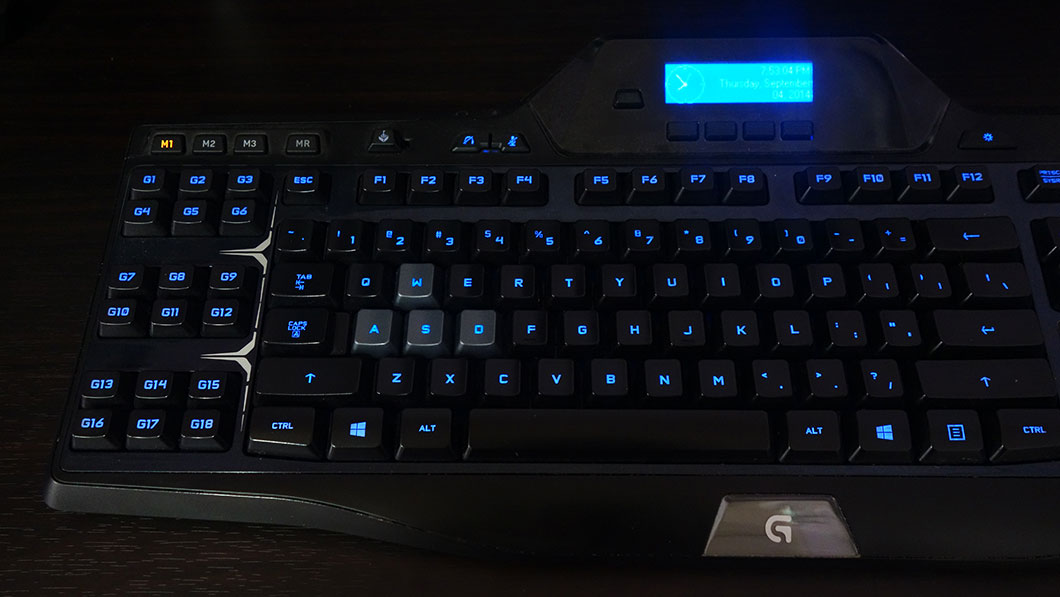 On the opposite top side of the keyboard is where you’ll find the usual set of LED lights for the different keyboard locks including Caps, Scroll, and Num lock, as well as the keyboard’s media keys which include the usual play/pause, stop, forward, and back buttons. Lastly, the right side also features a large audio mute button as well as a volume scroll wheel. The media keys worked for most of the media software we used but in some instances only worked when the software was the current focus and not while it was in the background. The large mute button and volume scroll wheel were both quite handy and easy to use, adjust the volume or quickly muting the audio were easy to do and both worked quite well.

Finally, on the top middle of the G510s is the keyboard’s main extra feature – the GamePanel LCD screen. The screen is able to display a multitude of built-in applets including a news/RSS applet, a time/date applet, a system performance (CPU/RAM usage) applet, and more. There are even applets for specific games like World of Warcraft and League of Legends. Additionally, fan-made applets are also available around the internet. The applets are switched between by a button found to the left of the screen and the applets can be controlled with the four buttons found below the GamePanel LCD screen.

Lastly and one of the most impressive things about the G510s is that all those features run through a single and relatively thin USB cable unlike the more common thick braided cables coupled with multiple USB plugs used on similar keyboards from competing brands. Because of this, the G510 is easy to setup and organize with the rest of your peripherals as well as making it easier to pack up and transport for on-the-go gaming. 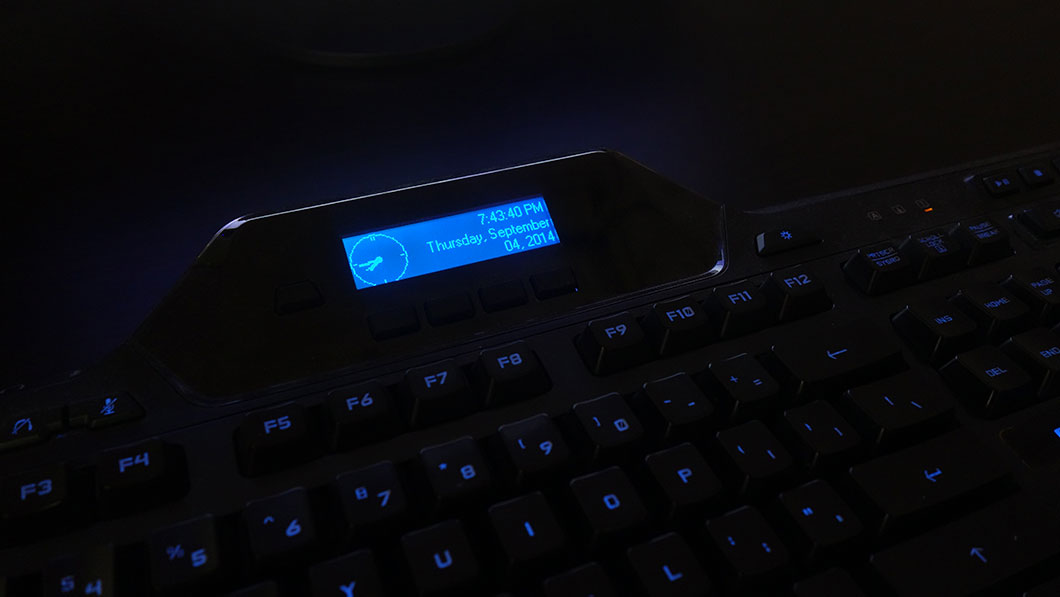 The G510s uses the same software as the rest of Logitech’s modern gaming peripherals, the Logitech Gaming Software. Within it, users are able to customize the G510s in a number of ways that we are actually quite impressed with. First off, like many similar software we were able to create multiple profiles each with their own set of settings and customizations for the keyboard and its features. We were even able to assign profiles to specific games or software that the G510s would automatically switch to when the specific game or software was activated.

Secondly, we were able to set the keyboard’s lighting to a specific color instead of a single default color found in other backlit keyboards. In total, the G510s features up to 16 million available colors which we were able to assign to specific profiles or specific games or apps. Thirdly, not only were we able to assign specific functions to the many G-Keys as well as any of the regular keys but were also able to create custom Macros. We were also able to create multiple profiles for our settings and even assign these profiles to specific games which would automatically activate once these games were run. 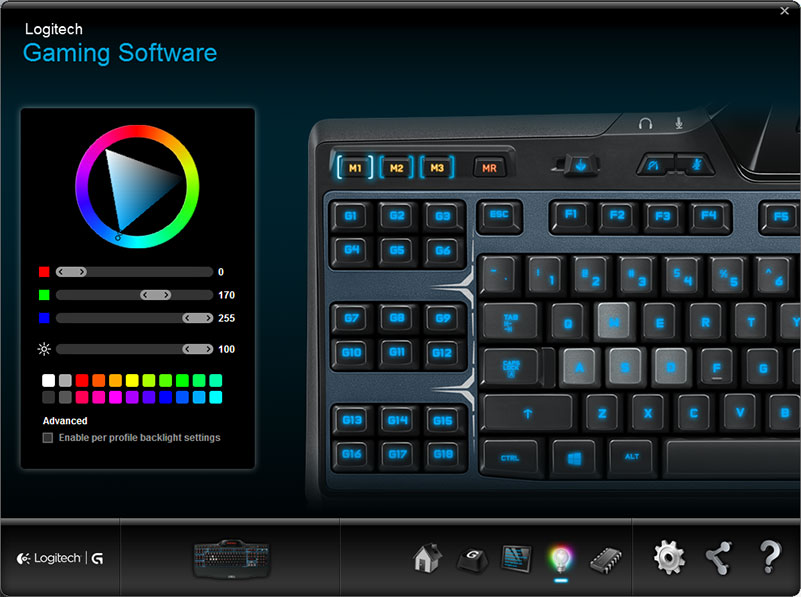 Lastly, the Logitech Gaming Software allows us to customize the aforementioned Applets used by the keyboards LCD screen. By default, the G510s comes with a number of applets, all of which we were able to enable or disable from the available applet rotation. Some of the applets were also customizable like the news feed/RSS applet. We were also able to tinker with some of the previously mentioned game-specific Applets like the one for League of Legends.

As for the keyboard’s overall performance, we had the privilege of using the G510s for almost a year and in that time it became one of our favorite keyboards for both work and gaming. The keys were always responsive and easy to type with. Whether we were spamming them to activate abilities in games or typing a review or news article, our fingers barely fatigued with the keyboards rubber dome keys. We also didn’t find any issues when using any of the keyboard’s many extra features from the media keys to the on-board audio to the GamePanel LCD. As if Logitech’s trademark, all of it just worked; and it worked well.

The G510s is probably the best non-mechanical keyboard we’ve ever used. The large number of extra features and excellent build quality make the hefty price well worth it. If you’re one of the shrinking few who still prefer membrane/rubber-dome keyboards over mechanical switch ones then the G510s will definitely meet all your needs and more. The only real setback the G510s has going for it is its price in relation to the increasingly more popular mechanical keyboards which some may find unjustified. But as we previously said, the G510s has become our favorite non-mechanical keyboard and will definitely be our first choice when buying one.