Gamdias first started introducing their products into the Philippines a couple of years ago, which included their wide range of gaming peripherals from keyboards and mice to headsets and more. The company’s products range from affordable, entry-level gaming peripherals to more expensive and feature-filled products.

The Hermes E2 7COLOR features a simple design with very little flair. The body of the keyboard comes in a simple matte black plastic with a pair of grooves on the left and right of the key groups. The body also doesn’t feature a frame around the key groups so the keys and switches have a raised look.

The bottom of the keyboard features the same matte black plastic and comes with two fold-out feet in the rear to raise the keyboard as well as three rubber feet in the front to keep it steady. The entire keyboard measures only 370 x 140 x 30 mm so it’s pretty thin and compact, although it would have been more so if the bezels on the left, right, and top side were lessened.

The body of the Hermes E2 felt pretty solid and durable, with barely any flex, which came as a surprise after considering how light it weighs at only 675 grams. It’s also equipped with a pretty standard 1.5m USB cable. While it isn’t wrapped in fabric, the cable still felt durable and was long enough for standard desktop use.

The keycaps that came with the Hermes E2 also come in matte black plastic with some impressively clear printing that is both easily legible and accommodates the backlighting very well. Under the keycaps are what the company calls Gamdias-certified mechanical switches that look like Cherry MX clones and as such are available in blue, brown, red, and black variants. 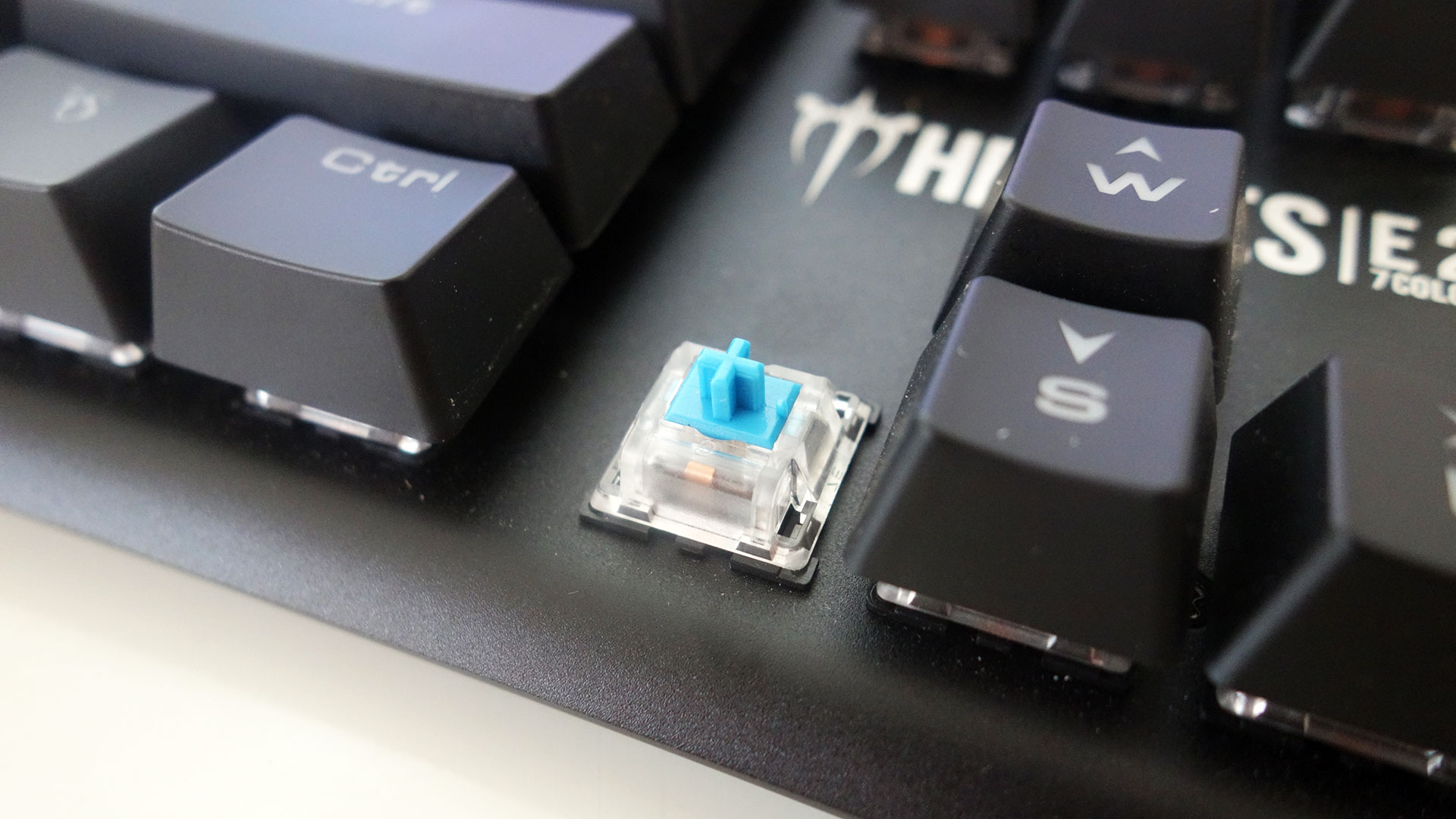 Our unit was equipped with the blue variant of the so-called Gamdias-certified mechanical switches so they featured a tactile bump as well as a clicky sound when pressed. The switches were pretty comfortable to use, albeit expectedly noisy. The switches had a smooth and comfortable travel and felt similar to Kailh switches.

The individually backlit keys of the Hermes E2 are mostly impressive save for a few inconsistencies with some of the keys where some aren’t as fully lit as others. The keyboard also doesn’t feature full RGB lighting and is extremely limited in its customization. And since it doesn’t work with any software, any changes to the lighting can only be made via shortcut keys.

Instead of featuring fully customizable RGB lighting, each row of keys are backlit by a different predetermined color and cannot be changed. Additionally, in spite being named 7COLOR, the backlighting only features six colors. From the top row to the bottom, the six colors featured are green, blue, pink, purple, yellow/orange, and red.

The Hermes E2 is equipped with only two lighting effects – static and breathing – and five different levels of backlight brightness. As previously mentioned, the lighting effects and brightness can only be adjusted via the shortcut keys on the keyboard. The backlighting can also be completely switched off when desired.

While the limited lighting features of the Hermes E2 7COLOR may be attributed to keeping the overall cost of the keyboard lower, there are already a handful of tenkeyless mechanical gaming keyboards in the market with fully customizable RGB lighting that are priced similarly than the Hermes E2 7COLOR, which puts it in a more competitively difficult position. 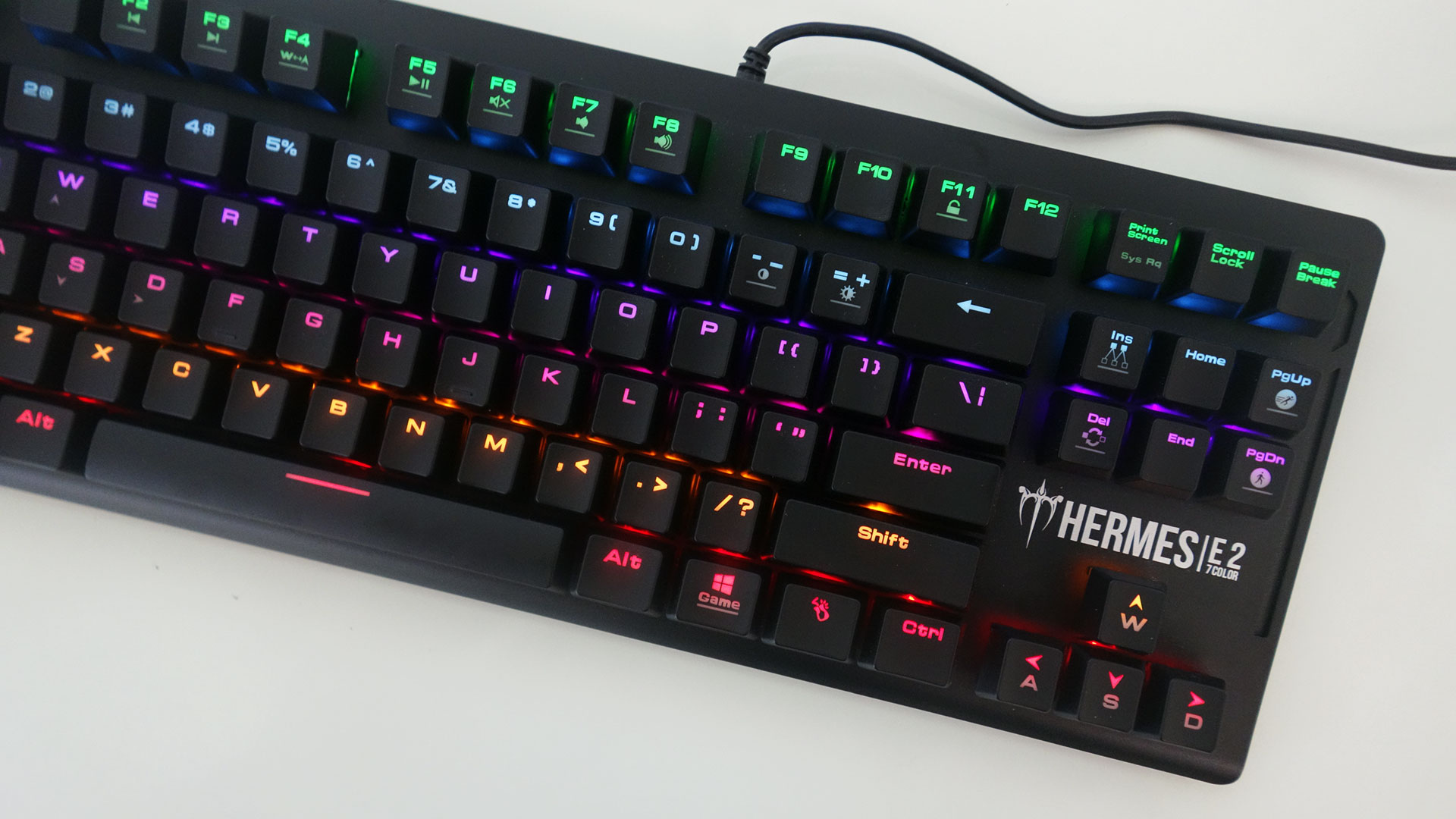 Going back to the shortcut keys, the keyboard’s range of shortcuts can be activated by pressing the Fn key as well as the corresponding key to activate the shortcut. Gamdias has decided to swap the Windows key and the Fn key on the Hermes E2, which puts the Fn key between the left Ctrl and Alt keys while the Windows key is found on the right side.

As expected, the shortcut keys include media controls, volume controls, backlight brightness adjustment, a keyboard lock shortcut, one to switch between lighting modes, a Game mode shortcut which deactivates the Windows key, keys to adjust the speed of the breathing lighting mode, and, surprisingly, a mouse lock key.

Disappointingly, the functions of many of the shortcut keys aren’t instantly made obvious by their print and the keyboard doesn’t come with a manual to explain their functions. Users will need to download the manual of the Hermes E2 from the official website as well as do a bit of research to find out what the shortcut keys actually do.

Overall, the Gamdias Hermes E2 7COLOR is a surprisingly decent keyboard. The build quality is impressive for a keyboard in its price range and the switches perform fairly well. While it does have a few shortcomings such as its limited and inconsistent lighting, the lack of a proper manual included in the box, and a very competitive price bracket, it’s still a decent choice for those looking for a very affordable tenkeyless mechanical gaming keyboard.