When it comes to modern gaming mice, competing manufacturers usually try to one up each other by coming out with mice with ‘unique’ but ultimately unergonomic shapes, higher maximum DPI (dots-per-inch), more and more buttons, or features that, in some cases, seem unnecessary. Other manufacturers have gone on an alternative route by including customization features in their gaming mice such as weight adjustment or changeable side panels and that’s the route ASUS has taken with their ROG Gladius gaming mouse. While it doesn’t have the aforementioned customization features, it does have customization that we’ve yet to see in previous gaming mice and could very well start a new trend in the industry.

First off, the ROG Gladius comes in a nice textured steel-grey hard plastic and an ergonomic design catered to right-handed user (sorry lefties). The sides of mouse feature rubber panels that come in a Mayan-inspired pattern. According to ASUS, the Gladius should be compatible with all grip types but we found that the mouse may be too small for palm-grippers with larger hands. In our usage, the most comfortable grip to use with the Gladius was a fingertip grip or a relaxed claw grip that almost borders on a fingertip grip. Aggressive claw-grippers may find it a bit hard to hold onto the mouse due to the way the rubber side panels are designed.

The left- and right-clicks of the Gladius are a bit unique in that they’re separated from the rest of the mouse’s body. While ASUS claims that the ‘floating’ left- and right-click make them more responsive, we actually found that they were a bit wobbly and proved to be show slightly inconsistent responsiveness depending on where on the button you push down. As for extra buttons, ASUS has decided to keep things simple with the ROG Gladius by including just two thumb buttons as well as a DPI switch behind the scroll wheel. The scroll wheel of the Gladius is your standard textured rubber wheel with a single down-click which is actually quite disappointing as we would’ve preferred the inclusion of left and right tilt-clicks as well. 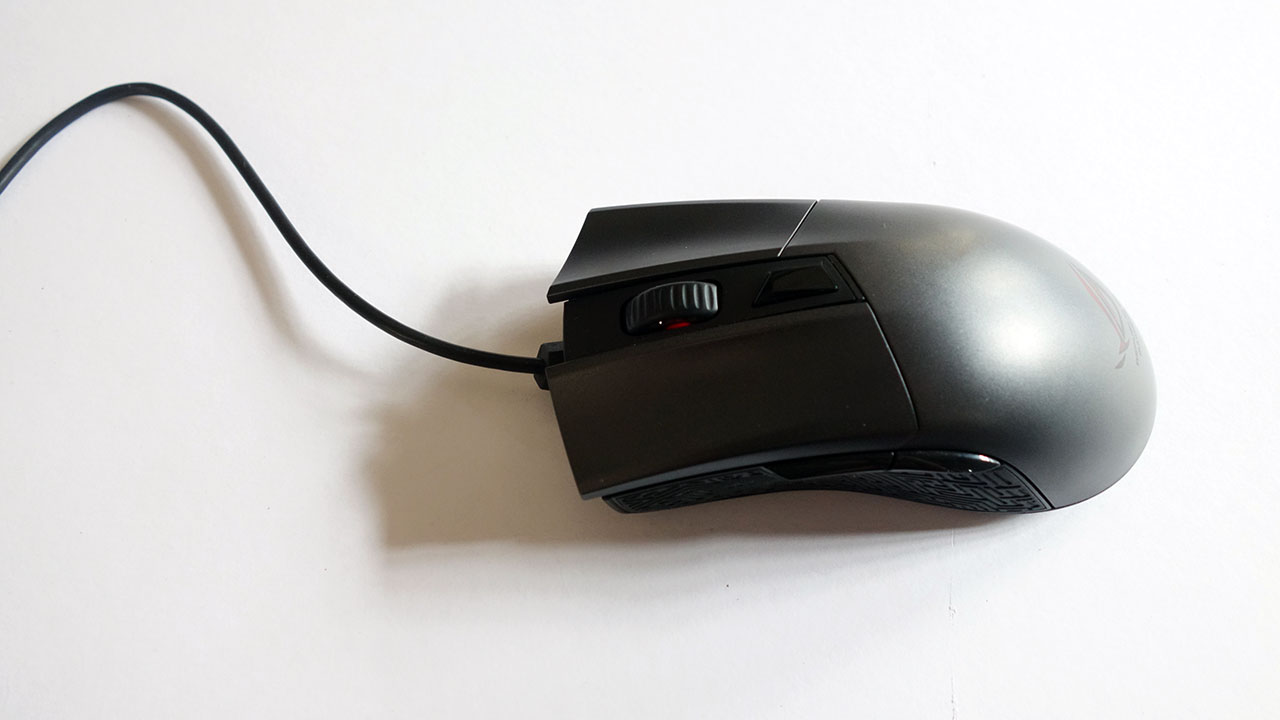 The front of the mouse features a grill-like design and is also where you’ll find the mini-USB port for the detachable USB cable. ASUS has included two USB cables with the Gladius – a 2-meter braided cable and a 1-meter rubber cable. The cables are held into place by a locking mechanism and a switch found below the mouse. The detachable cable feature and the inclusion of two different cables allows users to keep one cable attached to their workstation at home and use the shorter cable for bringing the Gladius out and using it with another computer or the user’s laptop. Other USB cables can also be used with the Gladius although they won’t feature the proprietary jack design that allows the mouse’s locking mechanism to latch onto them and keep them in place.

Opening up the ROG Gladius reveals the previously unseen customization feature we mentioned at the start of the review – the unique switch socket design that lets you easily and quickly replace the left- and right-click switches. Aside from the already installed Omron switches, ASUS has included an extra pair of Omron switches with a different resistance giving you a total of two resistance options for the mouse. Users may also opt to purchase other Omron switches from third-party retailers which exponentially increases the customization possibilities of the Gladius. According to ASUS, the Gladius is compatible with Omron D2F series & D2FC series mouse switches. Additionally, the Japan-made Omron switches are rated for up to 20-million presses.

The inside of the ROG Gladius also features an Avago ADNS-S3988 sensor which is considered by many gamers as the one of the best, if not the best mouse sensor in the market so it’s definitely a big plus for this mouse in terms of both accuracy and reliability. The sensor is capable of up to 6000dpi, 200 IPS, and 1.5mm of lift-off distance. The Gladius is also, according to ASUS, the first gaming mouse to feature a polling rate of 2000Hz instead of the more common 500Hz or 1000Hz. Additionally, the mouse’s sensor is also capable of 50g acceleration which is quite the unusual inclusion for a gaming mouse as most gamers would prefer to have zero acceleration for their mice. 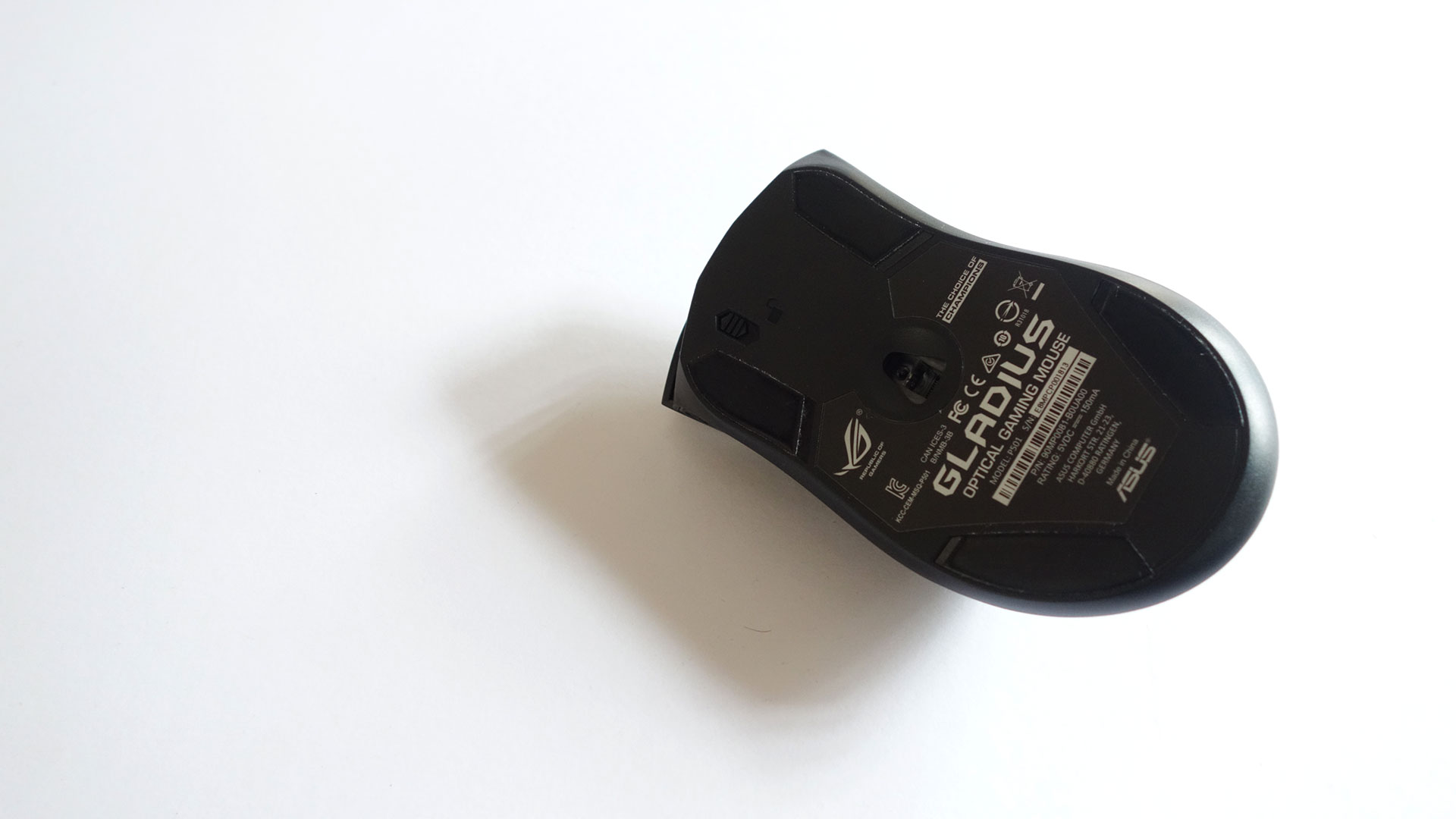 While not unique to the ROG Gladius, users may also customize its settings through the ROG Armory app on their PCs where they can adjust many of the mouse’s features including DPI settings, acceleration, angle snapping, and polling rate. Users may also customize any of the Gladius’ 6 programmable buttons or the mouse’s lighting settings for the ROG logo and scroll wheel to their preference. Lastly, the mouse can also be calibrated to the user’s mouse pad/surface for optimal accuracy. All these settings can be saved into profiles and the user’s favorite profile may be saved on the mouse’s built-in memory which makes the Gladius easily transportable and usable on any PC without having to install firmware or the ROG Armory on the remote PC.

The ROG armory was fairly straightforward and easy to use. We had some issues with saving settings and profiles which made us have to go back and re-adjust them again from time to time but that could easily be fixed with an update. 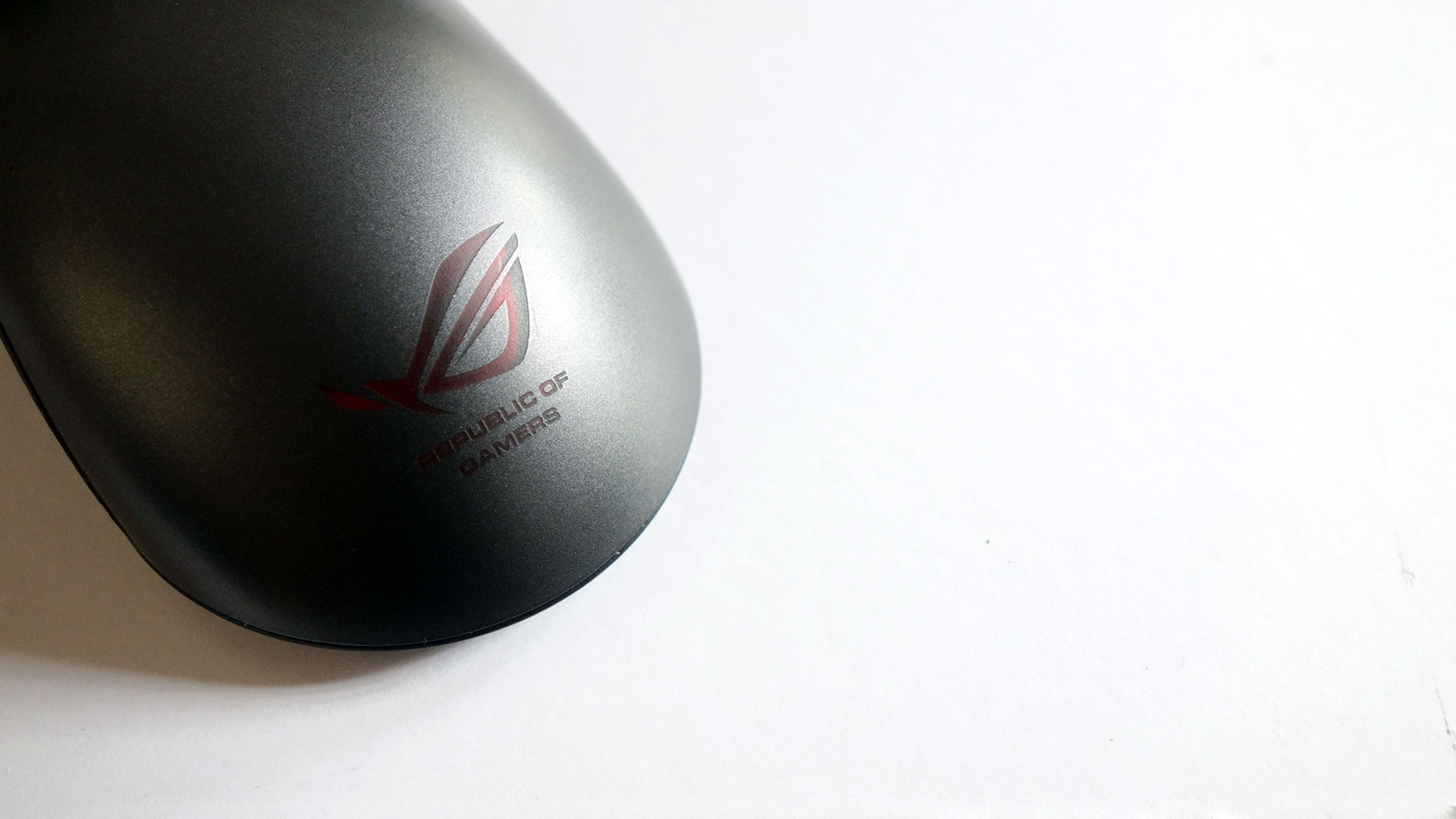 Due to the Gladius’ features, using it was quite an enjoyable experience. We tested it on a number of games including first-person shooters, MOBAs, RPGs, and a few others, and we found the sensor of the Gladius quite accurate and responsive. Being able to change the switches to our preference was great and made us wonder why none of the other big manufacturers have tried it before. The mouse, weighing in at 116 grams, was nice and hefty which made handling it easier and, as previously mentioned, fingertip or claw gripping it was comfortable. We must say though that a weight adjustment system would’ve brought the Gladius way up and above its competitors and is one of our few disappointments with it.

Lastly, the ROG Gladius comes with a slew of accessories including the aforementioned extra Omron switches, the two USB cables, a carrying pouch, the usual ROG stickers, and extra mouse feet. We have to note that we were unable to check out the carrying pouch as well as the longer braided USB cable as they were not included in the review unit we received. We’re assuming one of the previous reviewers neglected to return them. 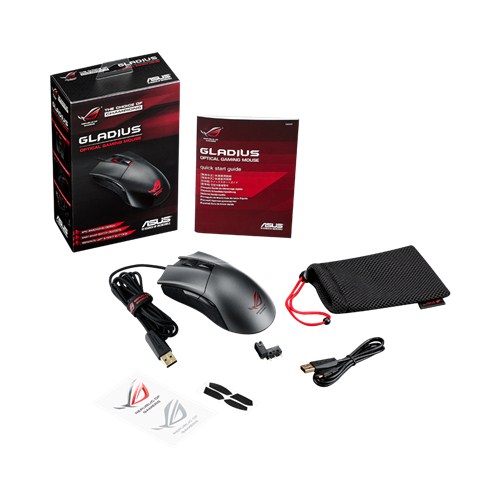 We’ve attached this image courtesy of ASUS (http://www.asus.com/Gaming/ROG_Gladius/gallery/) so you can see what comes with the Gladius.

Overall, the Gladius is a great mouse and one of our favorites of 2014. It performs well with many types of games due to its top-of-the-line sensor and customizable settings and is quite comfortable to handle due to its ergonomic design and quality materials. The replaceable Omron switch system is a great concept and an innovative new direction for gaming mice that we believe other manufacturers may or should follow suit. And with a price tag of around Php3,000, it’s one of the best mice in its price range. We definitely recommend the ROG Gladius for those looking for a top-quality gaming mouse at a great price and with great features. ASUS has done a great job with the ROG Gladius and we’re extremely excited to see where they go from here.