The realm of high-end gaming laptops is a pretty precarious one as the cost of packing so much power into these portable packages makes the price tags for most of these mobile gaming monsters pretty steep making them generally inaccessible to most of the mass gaming market. But in spite of their high barrier to entry, the high-end gaming laptop segment is still surprisingly successful with many users capable of either outright affording the laptops or saving up to get them which means manufacturers still continually churn out and push the envelope of how much performance and how many high-end features they can squeeze into these portable desktop replacements. One of the latest of these portable gaming monsters is the ASUS ROG G752, the latest in the company’s line of high-end gaming laptops and we spent some time with the G752 just to see how much of a monster it really is.

The first time we laid our eyes on the G752, we were caught by surprise by its “new” look. The G752’s design is a clear departure from the ROG line’s usual aesthetic, going from the usual black and red color scheme to a new brushed aluminum and orange design. It’s also not definitely going for a slim look as the monster is far from being thin and light measuring around 51mm when closed and weighing a whopping 4.4kg, the G752 is not only trying to be a monster when it comes to performance but also in its looks. The G752 shares this new look with ROG’s other current high-end notebook, the GX700, making it apparent that ASUS wants to distinguish its top-of-the-line offerings from the rest of the ROG line. 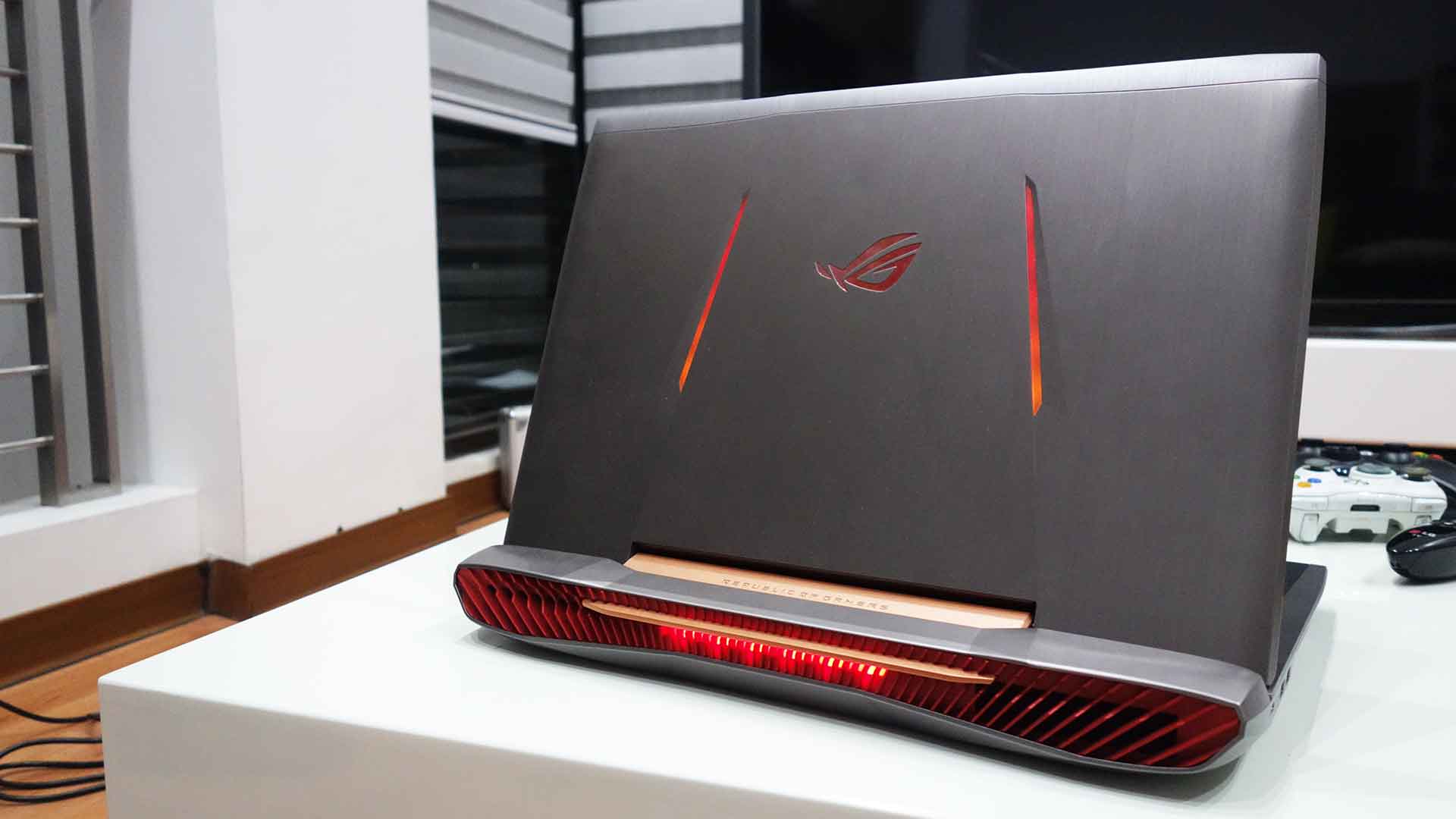 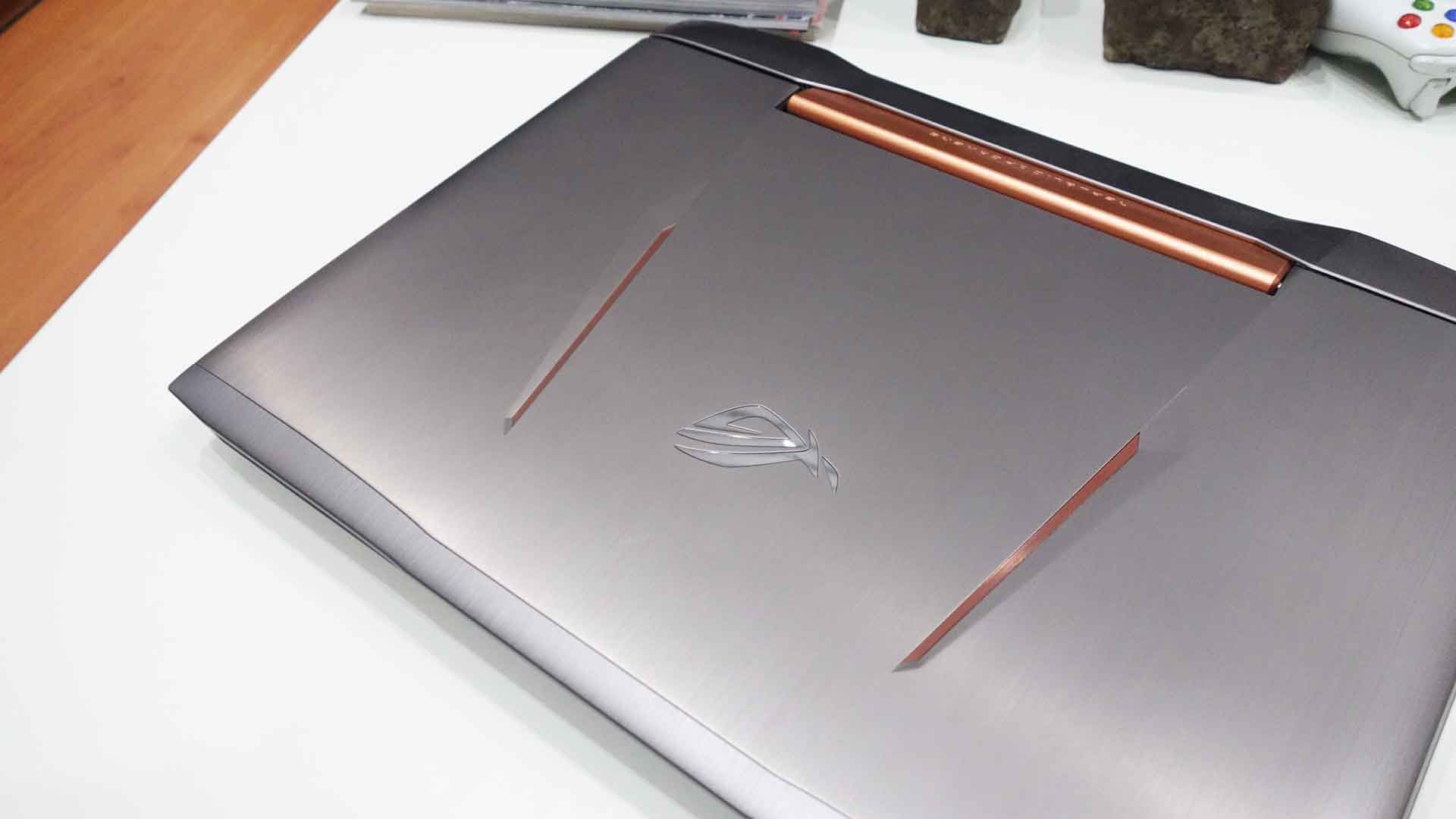 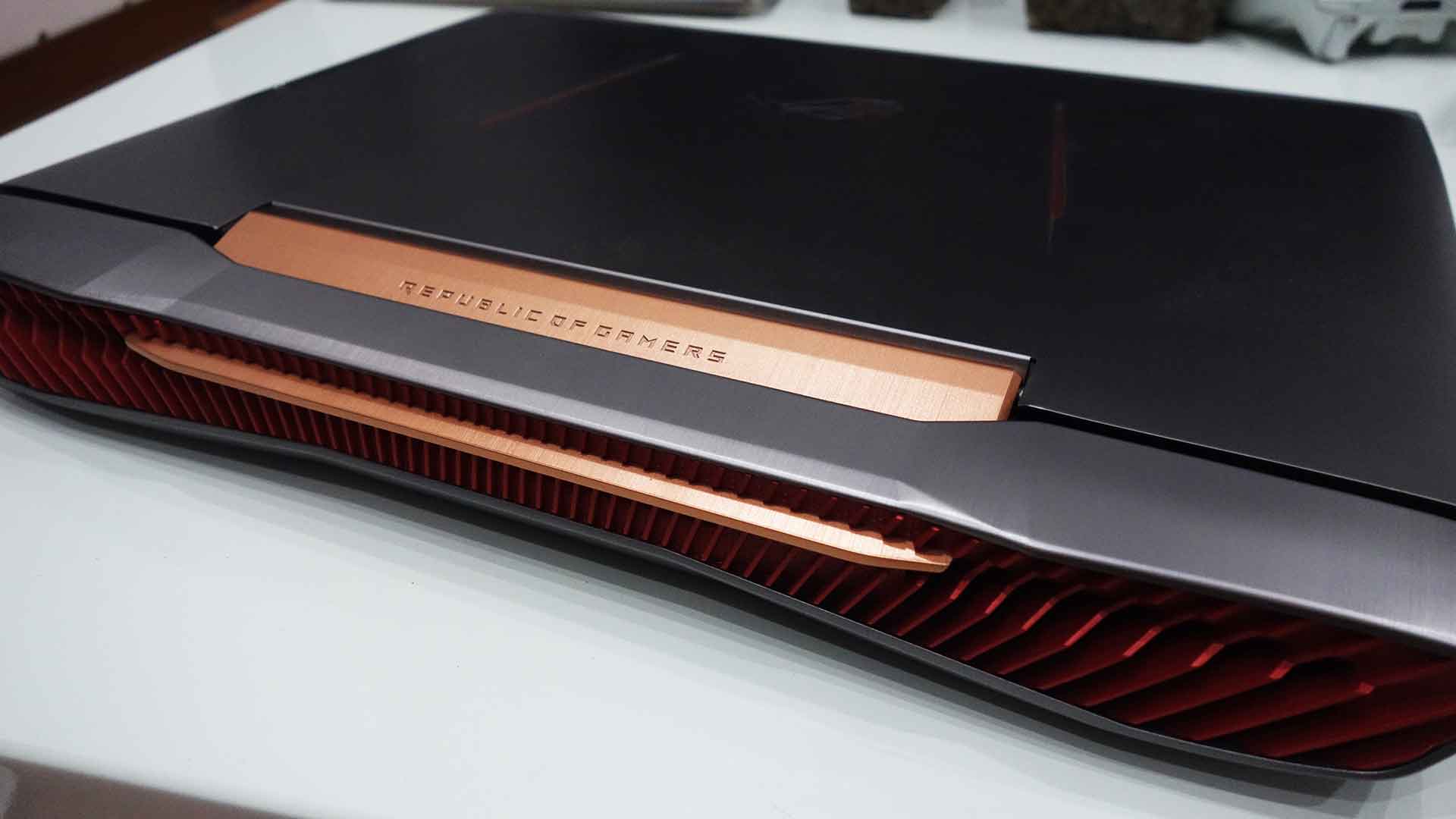 One of the most apparent features of the G752 is the gigantic cooling vents found at its rear. Looking like something from a sports car with gigantic bright orange vent grills, the setup is part of the G752’s 3D Mobile Vapor Chamber cooling system that utilizes two heat sink fan assemblies combined with a copper heat pipe array that connects to independent cooling modules for the laptops GPU and CPU to supposedly maximize the laptops cooling efficiency. The 3D Mobile Vapor Chamber also features Dust-Release Thermal Tunnels that blow out dust while sucking air in to keep dust away from the laptops internal components.

Opening up the G752 reveals its gigantic 17.3-inch full HD 1080p IPS display. The screen on the G752 is one of the best displays we’ve seen on a laptop so far. Not only does it look great with adequate brightness, great color, impressive viewing angles, and solid contrast due to its IPS panel but it also performs excellently for gaming because of its 60Hz refresh rate coupled with NVIDIA’s G-Sync technology. It was a good decision for ASUS for keep the resolution of the G752’s display to 1080p as it is able to balance and maximize both the performance of the display and the performance of the laptop itself. 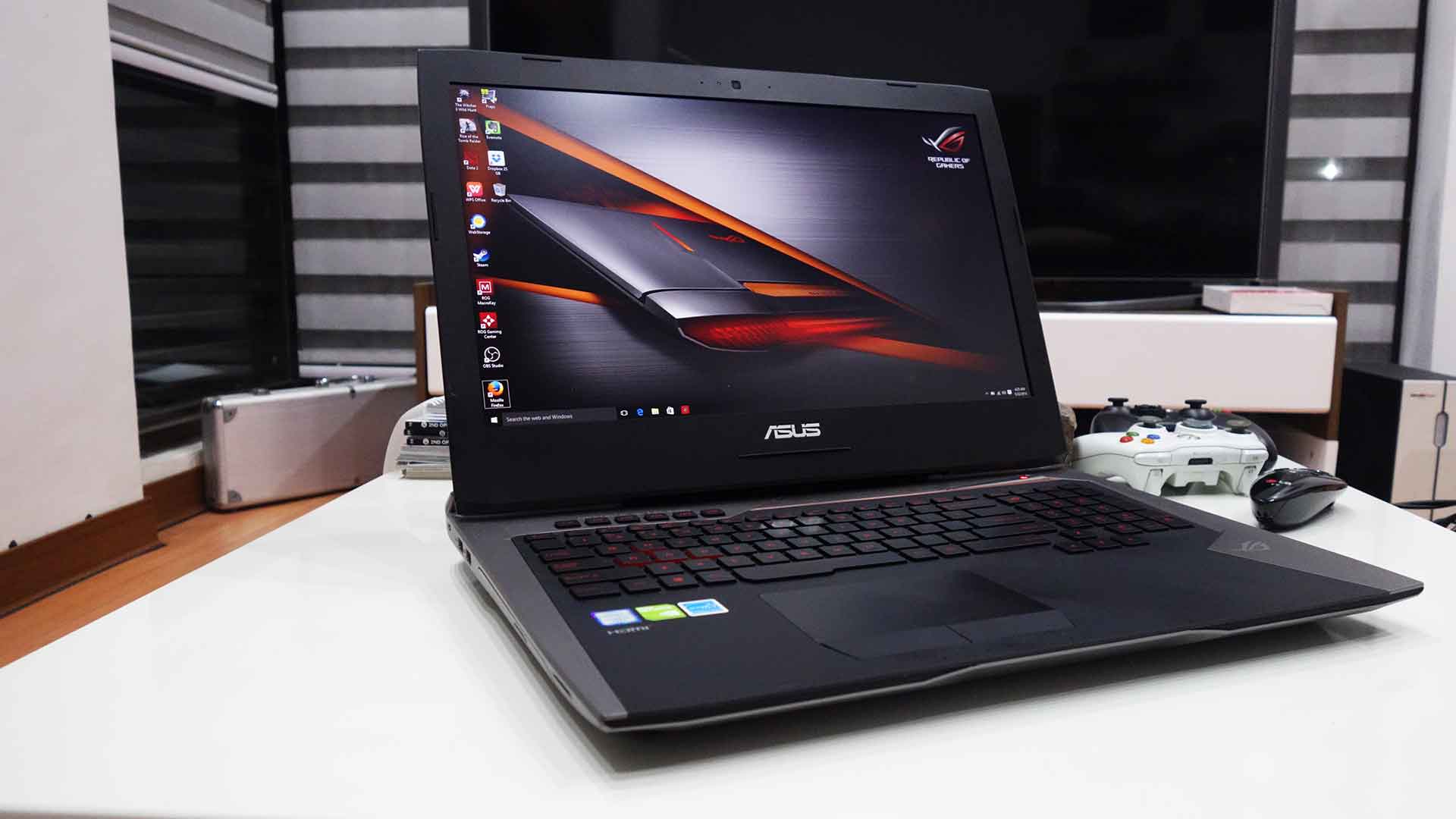 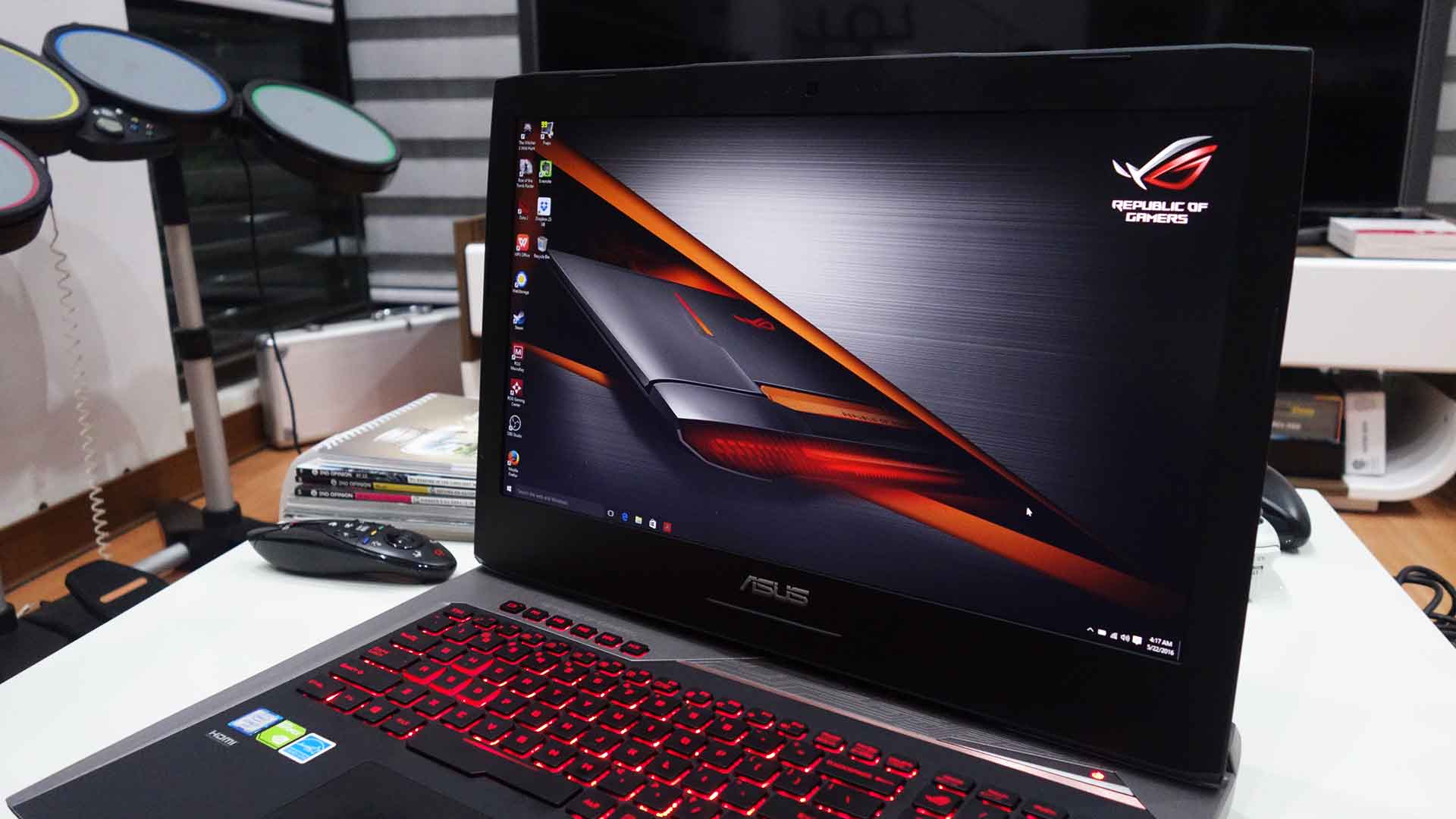 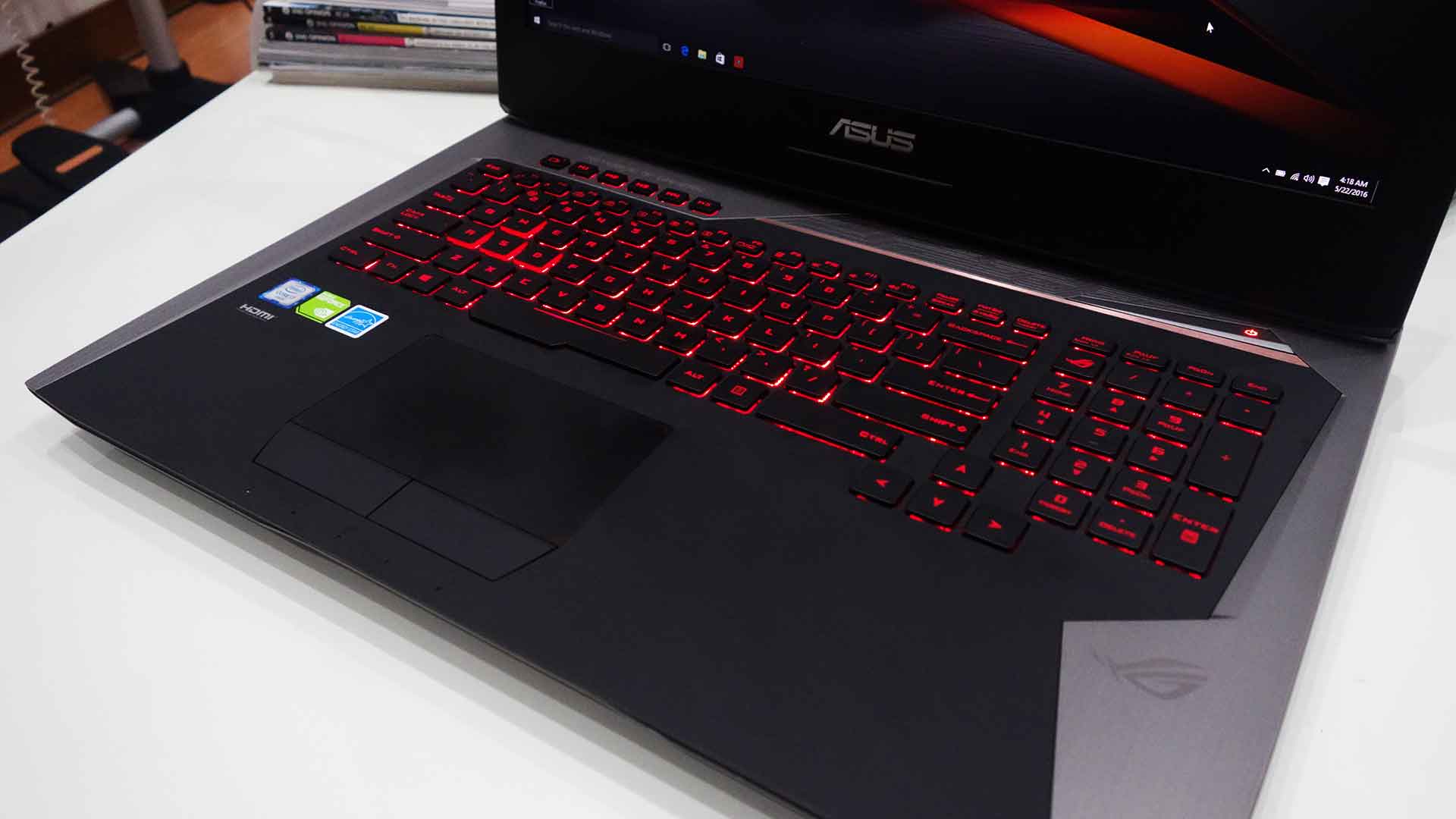 Below the display, on the bottom half of the G752, is the laptop’s keyboard which features Chiclet-style, membrane-type backlit keys that the company has designed to have a travel of only 2.5mm making them incredibly responsive. The company has equipped the keyboard with 30-key rollover so pressing multiple keys at the same time will never be an issue. While there aren’t any dedicated media keys, there is a row of five programmable macro keys above the upper left-hand side of the keyboard which can be used to quickly launch games and programs or initiate in-game commands. There’s also a dedicated record button that automatically launches Xsplit. While we didn’t find the keyboard vastly remarkable, it was still able to do its job well enough.

The trackpad on the G752 is fairly large and is accompanied with similarly large buttons. While we didn’t expect the trackpad to be used for gaming and it would be more likely that those who carry this laptop would also carry a separate gaming mouse, it was still surprising to discover that the trackpad and its accompanying buttons performed pretty well. The trackpad was smooth and responsive while the buttons, which feature a classic mechanical design, were also impressively responsive and provided decent feedback when pressed.

The G752 features two speakers and a bottom-mounted subwoofer that outputs impressively clear and powerful audio, something that we usually don’t expect from laptops. The speakers maintained their great clarity even at high volume levels and had enough power to easily fill an entire room. Making them great for not only gaming but also for multimedia use. 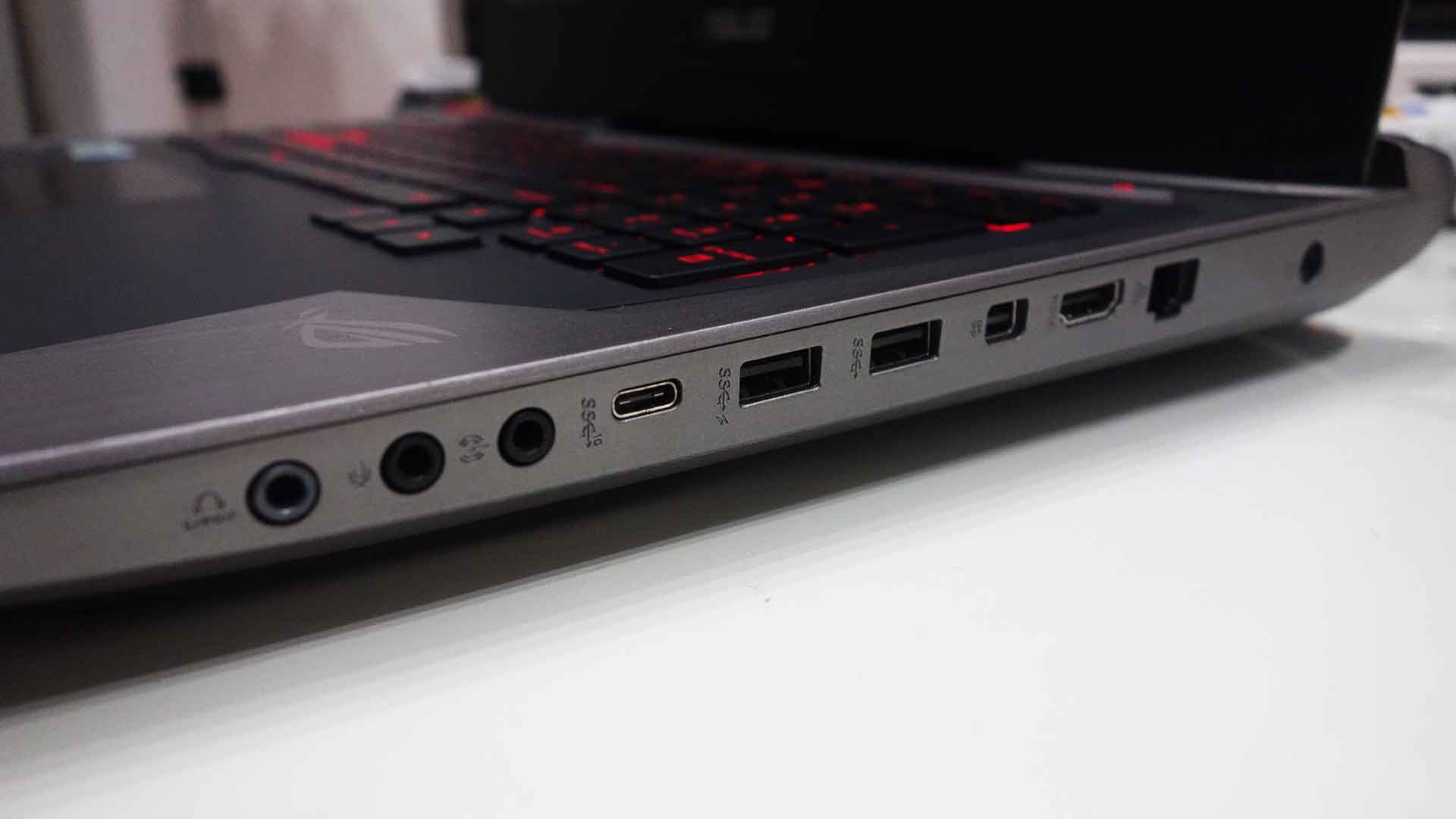 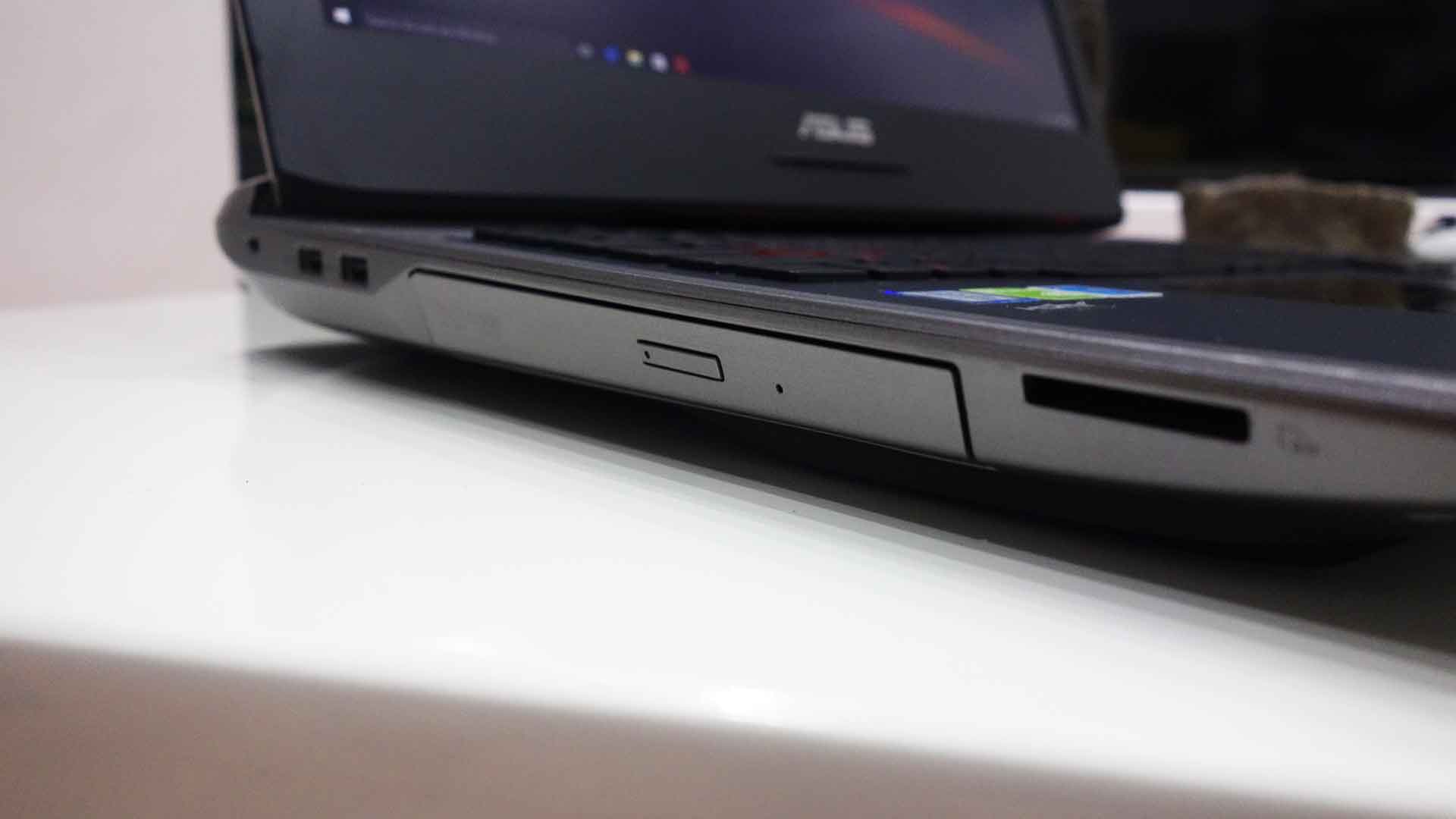 Most of the ports on the G752 are found on its right-hand side including the three audio points, a USB Type-C port, two USB 3.0 ports, a mini DisplayPort, an HDMI port, an Ethernet port, and the power adapter port, while the left-hand side only hosts two more USB 3.0 ports. ASUS deciding to put most of the laptop’s ports on the right-hand side of the device may be an issue for some right-handed mouse users as that side of the laptop could become a bit cluttered with all the connectors and cables that could possibly be placed there.

ASUS has equipped the G752 with a slew of software and hardware features that help improve its whole user experience. The first of these features is the ROG Gaming Center where users can view the G752’s system information such as specifications and current storage status as well as monitor the G752’s current CPU and GPU core and memory frequencies as well as temperatures. The ROG Gaming Center also gives users access to and the capability to adjust and customize the rest of the laptops features such as ASUS’s suite of gaming features such as ROG GameFirst III feature, ROG MacroKey feature, and more.

The company has also equipped with G752 with its Sonic Studio and Sonic Rader features. Sonic Studio improves the audio input and output of the G752 for high quality gaming audio as well as improved streaming and audio recording through better voice pickup and noise reduction while the company’s Sonic Radar feature helps those who play first-person shooters detect their opponents by providing a visual on-screen overlay that shows the relative position of in-game sounds like gun shots or footsteps.

To top it all off, ASUS has included a lifetime XSplit GameCaster account with the G752 so users can instantly stream their gameplay on popular streaming services like Twitch or YouTube Gaming.

As expected, the performance of the G752 was overwhelmingly impressive. It was easily able to handle and, in some cases, destroy anything we threw at it. We played a few games on it to test its real-world performance including The Witcher 3: Wild Hunt, Rise of the Tomb Raider, and the massively popular Dota 2 and in our tests, the G752 was able to run all of these games at maximum settings at a smooth 60 fps framerate. We were also able to edit and output photos and videos using Adobe Photoshop and Premiere Pro without any hitches. Watching movies was also a smooth experience with the G752 as expected with its high-end specifications. While doing all of this, the laptop’s surface did not feel extremely warm except near the center of the keyboard. Both the WASD area and the plam rest of the G752 stayed cool throughout use so even at high loads and during gaming, heat did not become an issue to comfort while using the laptop.

With the amount of power the G752 is capable of churning out, it wasn’t a surprise that its battery life is inevitably one of its weaknesses. Even at light loads or when idle, the G752’s battery only lasted a little over 6 hours and less than 2 hours when used heavily. This isn’t really unexpected as most gaming laptops are not known for their battery lives due to the amount of power they require to run. While this may not be an issue for those who usually use their laptops in places with available power outlets for charging, it may be become an issue for the few that enjoy gaming on-the-go, which isn’t really what this laptop is meant for considering its size and weight.

The G752 is undoubtedly a beast of a machine. Its plethora of strengths from its screen and build quality to its features and inclusions far outweigh its very few shortcomings and to say that its performance, for both gaming and productivity, is impressive is a massive understatement. Backed by ASUS’s seal of quality, it’s hard to find a match for G752 in its price range and anyone who can or is willing to afford its steep cost of admission will definitely not find themselves wanting or disappointed. The ROG G752 is one of the best laptops the company has come out with in terms of design and performance and thoroughly impressed with just how great its entire package is. We definitely recommend the ROG G752 for those looking for an insanely powerful laptop and aren’t too concerned with its Php149,995 price tag, as it is definitely well worth the price.