REDMOND, Wash., Dec. 15, 2020 /PRNewswire/ — Microsoft Corp. and Warner Bros. are tipping off an epic partnership, celebrating the release of the new movie "Space Jam: A New Legacy," coming in 2021. The campaign launch teams up Xbox with basketball champion and cultural icon LeBron James, Bugs Bunny and the rest of the Looney Tunes Tune Squad to amplify coding education and create an original Xbox arcade-style video game inspired by the movie.

As announced on his Instagram, LeBron and Bugs Bunny are on the hunt for the best fan-submitted video game ideas. Starting Dec. 14 through Dec. 30, fans aged 14 and up can visit the official contest website to review official rules and submit their game ideas. To enter, fans select the gaming genre of their choosing using a key image, and then describe the game idea in less than 500 words.

Two winners will have their ideas brought to life in the official "Space Jam: A New Legacy" arcade-style video game, available as a Perk for Xbox Game Pass Ultimate members in 2021. Winners will also receive the following prizes: their names featured in the game credits; an exclusive winner’s bundle with signed and authenticated LeBron James memorabilia, "Space Jam: A New Legacy" merchandise and Nike VIP packs, and a personalized Xbox Series S console; a private friends and family screening of the film; and a virtual Microsoft coding workshop for their local community.

To help coders of all ages jump-start their creativity, Microsoft Stores are hosting free, one-of-a-kind "Space Jam: A New Legacy"-themed virtual workshops on video game creation. Students will build a playable prototype of a video game using block-based coding on the MakeCode Arcade platform, while learning about the professional skills and STEAM careers involved in game design. Additional resources and other free workshops that teach new skills and keep kids entertained this holiday season can be found on the microsoft.com virtual student workshop page.

There are also two film-themed Microsoft Learn lessons, targeting more experienced coders, older teens, high school and college-aged students, and adults, that focus on how to use player stats to make real-time decisions in the middle of a game. The first lesson includes predicting efficiency ratings with machine learning and Visual Studio Code, using data from human and Tune Squad basketball players. The second lesson includes building a web app that uses additional machine learning models in real time to help a coach decide who needs a water break and who should be put in the game to yield the highest likelihood of winning.

The video game contest, coding workshops and lessons align with Microsoft’s greater skilling initiative, which aims at helping 25 million people — including those from underrepresented populations —acquire new digital skills and apply them to their passions.

ABOUT SPACE JAM: A NEW LEGACY
Welcome to the Jam! Basketball champion and cultural icon LeBron James goes on an epic adventure alongside timeless Tune Bugs Bunny with the animated/live-action event "Space Jam: A New Legacy," from director Malcolm D. Lee and an innovative filmmaking team including Ryan Coogler and Maverick Carter. This transformational journey is a manic mashup of two worlds that reveals just how far some parents will go to connect with their kids. When LeBron and his young son Dom are trapped in a digital space by a rogue A.I., LeBron must get them home safe by leading Bugs, Lola Bunny and the whole gang of notoriously undisciplined Looney Tunes to victory over the A.I.’s digitized champions on the court: a powered-up roster of basketball stars as you’ve never seen them before. It’s Tunes versus Goons in the highest-stakes challenge of his life, that will redefine LeBron’s bond with his son and shine a light on the power of being yourself. The ready-for-action Tunes destroy convention, supercharge their unique talents and surprise even "King" James by playing the game their own way.

ABOUT MICROSOFT
Microsoft (Nasdaq "MSFT" @microsoft) enables digital transformation for the era of an intelligent cloud and an intelligent edge. Its mission is to empower every person and every organization on the planet to achieve more. 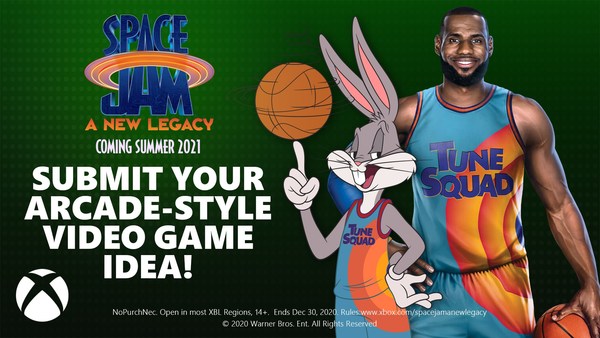