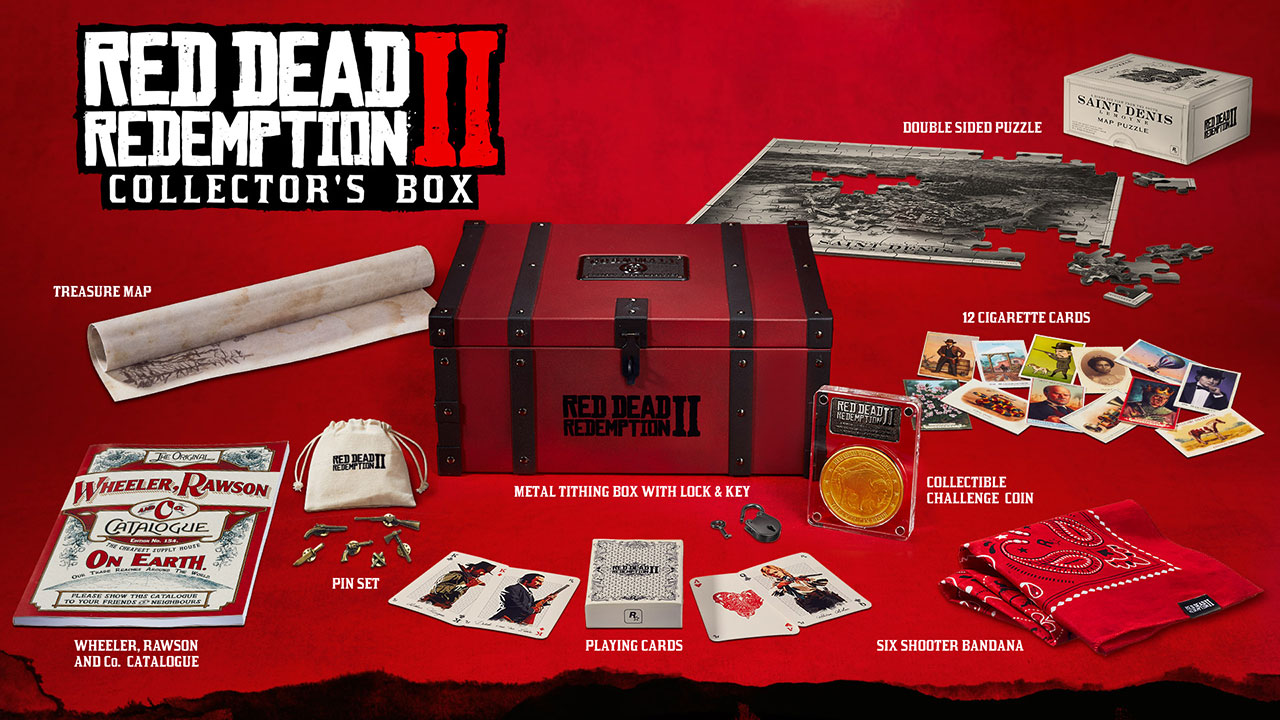 The Red Dead Redemption 2 Special Edition and Ultimate Edition have been officially announced by Rockstar Games. Both editions come with a slew of exclusive digital bonuses such as outfits, boosts, missions, and weapons. The company also announced the separately sold Red Dead Redemption 2 Collector’s Box which comes with a selection of physical merchandise but doesn’t come with the actual game or the digital bonuses.

The Red Dead Redemption 2 Special Edition comes with an exclusive Bank Robbery Mission and Gang Hideout in Story Mode, a Dappled Black Thoroughbred horse, an Eagle Talon Talisman that increases the duration of the player’s environmental awareness skill, an Iguana Scale that will reduce the damage the player takes while on horseback, a Core Stat boost, a boost that increased money earned during robbery missions with the Van der Linde gang as well as when selling animal carcasses, discounts on Van der Linde gang camp upgrades, a Nuevo Paraiso Gunslinger Outfit, and free access to three weapons at the in-game Gunsmiths in Story Mode – the Volcanic Pistol, Pump Action Shotgun, and Lancaster Varmint Rifle. 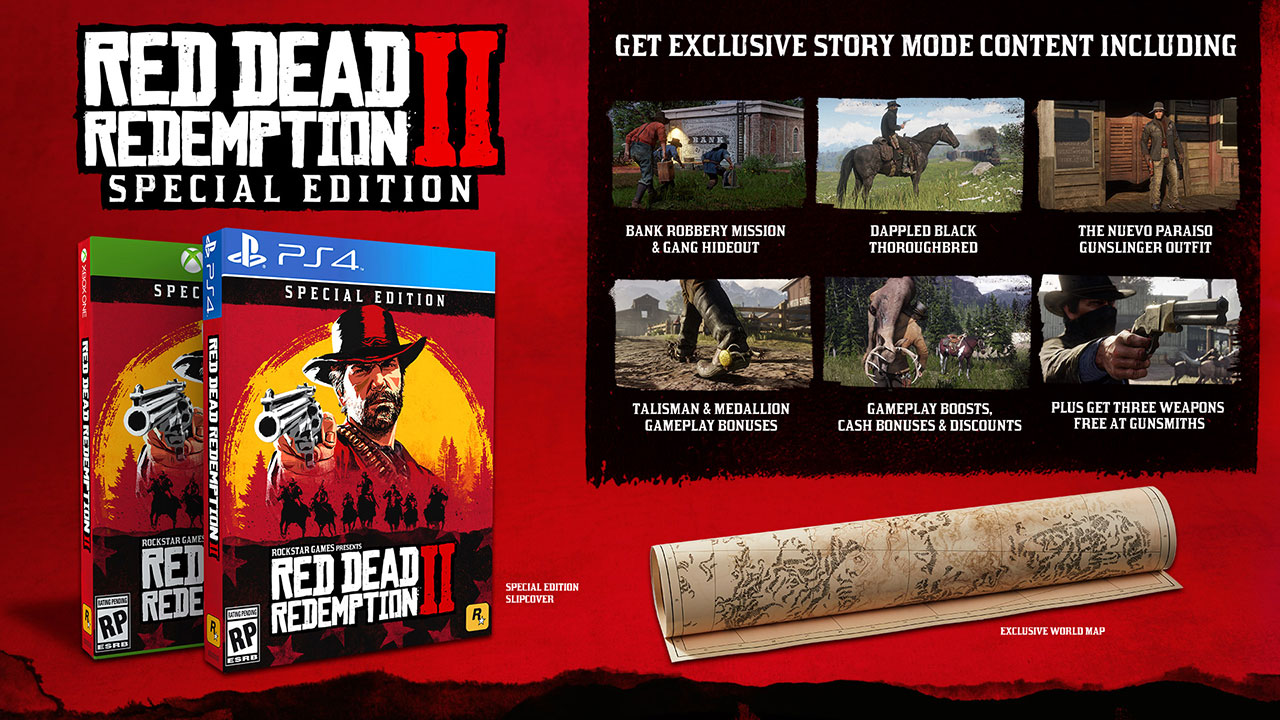 On the other hand, the Red Dead Redemption 2 Ultimate Edition comes with all the Story Mode bonuses from the Special Edition plus a Blackrose Bounty Hunter Outfit, Copperhead Enforcer Outfit, a Black Chestnut Thoroughbred horse, free access to the Survivor Camp Theme, free access to the three aforementioned weapons in online mode, and an online rank boost up to rank 25. 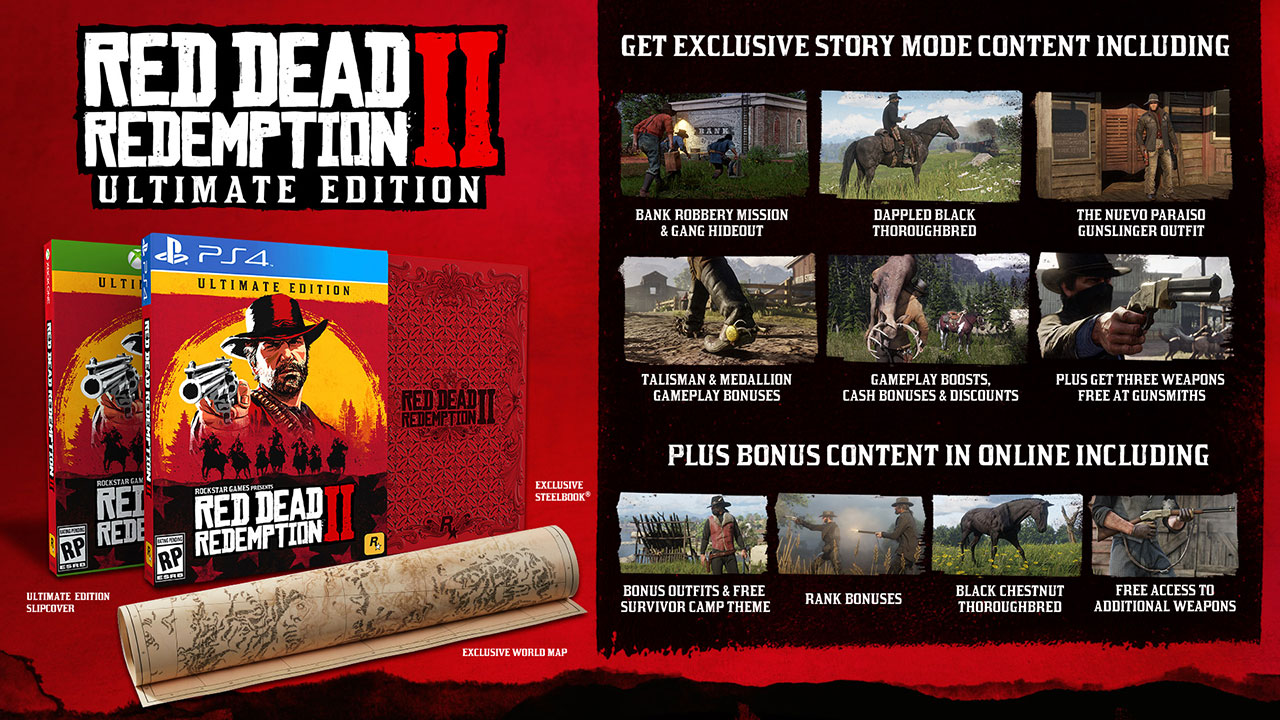 Lastly, Rockstar Games also announced the Red Dead Redemption 2 Collector’s Box (pictured above). It includes an assortment of merchandise including a Metal Tithing Box with Lock & Key, a Collectable Challenge Coin, a Double Sided 100-Piece Jigsaw Puzzle, a Six Shooter Bandana, a physical Treasure Map, a Pin Set, Playing Cards, a Wheeler, Rawson and Co. Catalogue, and 12 Cigarette Cards. The Collector’s Box surprisingly doesn’t include the game itself so those who want the items from it will also have to purchase either the Special Edition or Ultimate Edition to get the game and the digital bonuses.

Additionally, all pre-orders of Red Dead Redemption 2 will come with two digital bonuses including a War Horse and the Outlaw Survival Kit.

Read Dead Redemption 2 is scheduled for release on October 26, 2018, for the PlayStation 4 and Xbox One.