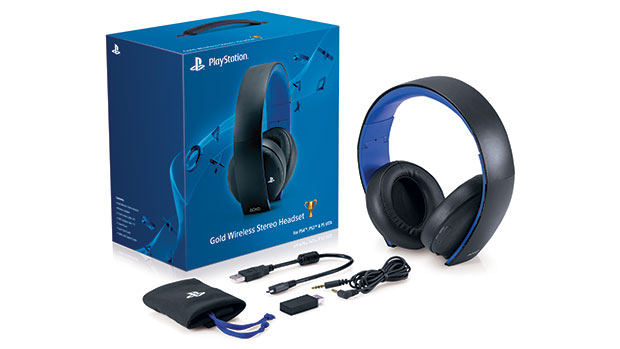 Sony Playstation PULSE and PULSE Elite Edition wireless headset owners who have been yearning for support for their headsets on the Playstation 4 can now rejoice, the latest system software update (1.60) for the PS4 brings with it support for Sony’s official Playstation headsets.

Sony has also announced a new official headset – the Gold Wireless Headset. It’s a 7.1 virtual surround sound headset with a noise-cancelling microphone, customizable faceplates, and other features. The headset is compatible with the PS4, PS3, and PC using the included wireless dongle. It’s also compatible with the PS Vita and other mobile devices with the, also included, 3.5mm audio cable. Sony has also bundled in a travel pouch for transporting and safe-keeping.

The official Playstation blog has stated that the new headset’s battery can last eight hours of straight gameplay. The Gold Wireless Headset has an SRP of $99.99 (~Php4,500.00) and will be available in the US sometime this month.

Lastly, the Gold Wireless headset and the PULSE Elite Edition headset are compatible with Sony’s free Headset Companion App. The app, which comes out this month on the Playstation Store, will allow gamers to download custom audio modes created by game developers to enhance their game’s audio experience. The app will also allow users to use preset audio modes as well as create their own custom modes.