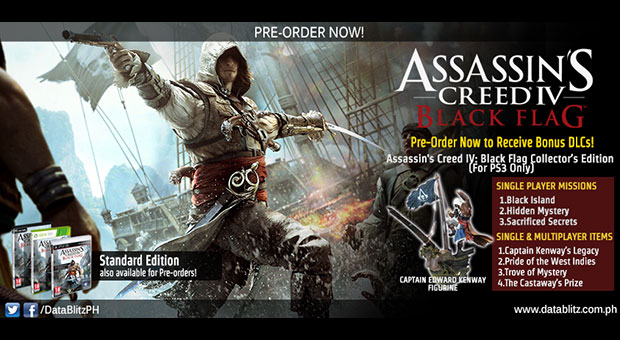 Assassin’s Creed IV: Black Flag, the sixth major installment in the franchise, takes place in the early 1700’s when pirates roamed and pretty much ruled the Carribean. Players will be able to meet legendary pirates such as Blackbeard, Calico Jack, and Benjamin Hornigold as well as captain their own ship called the Jackdaw which players will be able to upgrade throughout the game.

Those who pre-order the game will get a slew of single-player and multi-player bonuses including items and extra missions. Interested parties can pre-order the Standard Edition for Php500.00 for all platforms and Php2,000.00 for the Collector’s Edition (available only for the PS3 for now). 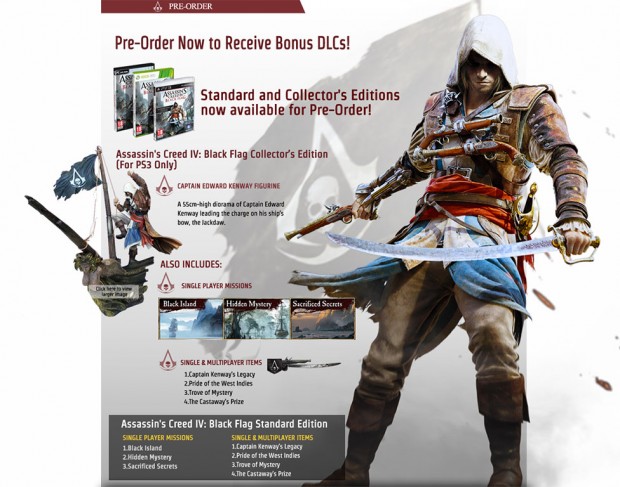 Here are the bonuses that will come with pre-ordering the game:

Collector’s Editions of the game also come with a Captain Edward Kenway Figurine.

The game is schedule for release in North America on October 29, 2013. No word as of yet on when the game will land on Datablitz shelves but we think it’s safe to say that it will be close to or on the same date it’s released in North America.