Online gaming has become one of the biggest sectors of the gaming industry in the past decade. Almost every genre and platform of gaming has some sort of online aspect to it. And for many types of online games, latency is a definite concern with some players opting-in or out of playing a game solely due to latency because good or bad latency could mean the difference between winning and losing; success or failure.

So here comes WTFast, a tunneling software of sorts that supposedly optimizes your computer’s connection to game servers by routing it through what they call their Gamers Private Network or GPN. WTFast officially launched their GPN (Gamers Private Network) last August and during their closed beta they already had over 750,000 registered GPN users.

New users may avail of their free trial which lets you use the core function of the service for 30 days which I think is a pretty generous trial offer when compared to what similar services offer. New users don’t even need to register to use the trial, just download the program, select Trial User at the program login screen and start using it. 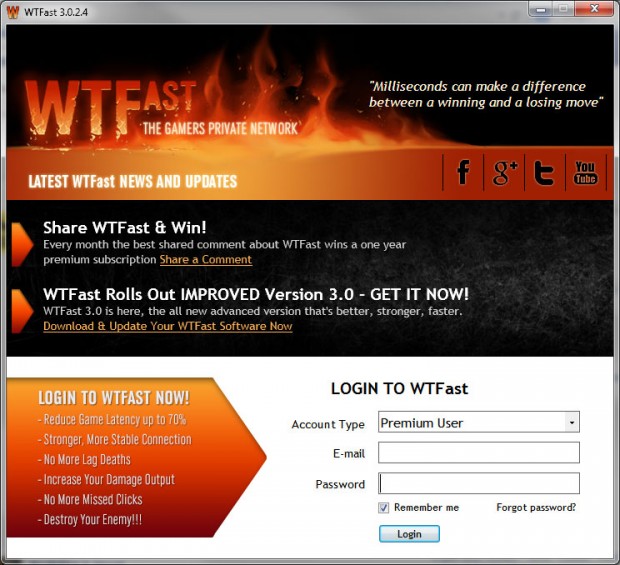 WTFast provides 2 paid service tiers to gamers – Basic and Premium – with the Premium tier providing extra features like customizable WTFast server ports, a “Run Silent” option, and support for more games. The Basic service costs $5.99/month while the Premium service will cost you $4 a month more with longer service subscriptions (3, 6, or 12 months) for either tier coming out cheaper.

The user interface of WTFast is pretty simple and straightforward. After logging in, you only need to choose/search which game you’ll be using WTFast with, the server you want to route your connection through, press Play, and you’re good to go. The folks at WTFast recommend choosing the server closest to the game server you’ll be connecting to for the best results.

For this review, I used WTFast with 2 games – Final Fantasy XIV: A Realm Reborn on a Japan-based server and League of Legends on the North American West Coast server. The ISP I played on was a 3Mbps PLDT MyDSL plan.

WTFast’s effect on my latency with these games varied. With Final Fantasy XIV: A Realm Reborn, I saw improvements in latency from as low as 30ms to as high as 70ms with the variations probably due to issues with my ISP. 30 to 70ms might not seem much but in games like FFXIV: ARR, which is known for having sub-optimal net code, a decent ping is paramount to getting through the more difficult dungeons and boss fights in the game. 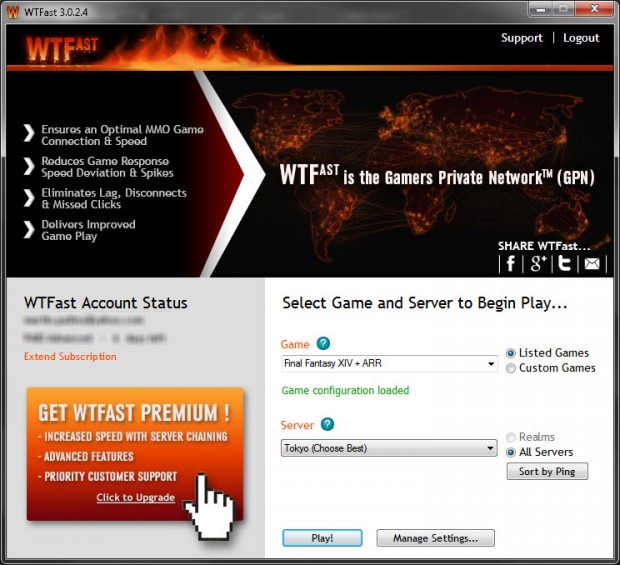 I got a completely different result when using WTFast with League of Legends though. My latency when playing LoL on the North American server whilst using WTFast went by around 10-20ms. It’s not much but for a service that’s supposed to improve one’s ping, this is a bit disappointing.

To be fair, the negative latency impact could be due to the combination of my ISP and WTFast. Other users on other ISPs could reap different results. All in all, WTFast was impressive when it did improve my latency but it should be said that, as with any similar form of service with multiple variables, you’re mileage may vary.

While my experience with WTFast was mostly positive I did run into a few problems. On my system, installing the program in the default install directory would result in WTFast not working at all and instantly crashing whenever I ran it. A quick check on their support forums showed that this wasn’t an isolated case. I also encountered random crashes whilst using the program and sometimes had issues connecting to their GPN. 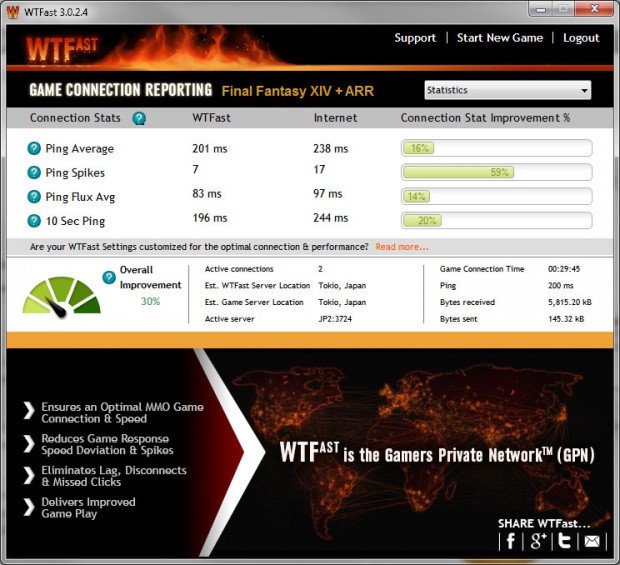 While the developers were very active in providing support to users whenever issues occurred these minor problems are the sort of things that I expect shouldn’t happen. But to be fair to the folks at WTFast, their service is fairly new so bugs and problems aren’t unexpected. And to their credit, over the course of my review, the WTFast client was updated at least 3 times which goes to show how active they are at improving their service.

WTFast has a lot of potential and it works great (most of the time). Client updates are regular and user support is active (for the moment, at least). So, if you play any form of online game whether it be an MMORPG, a MOBA, an FPS, or Fighting Game then WTFast is definitely worth checking out. Their very generous trial program enables curious users to see if it’s the service for them and if you’re serious about improving your latency in your games then their pricing schemes are reasonable and acceptable.