Theme Hospital was one of the best management simulation games of the 1990s. Its humorous tone and fun gameplay helped it become a commercial success. While the studio that developed it is no more, the game’s soul lives on more two decades later with Two Point Hospital. Dubbed as the spiritual successor of Theme Hospital, Two Point hospital is developed by Two Point Studios with Theme Hospital’s producer and lead artist at the helm. Initially released back in 2018 on Steam, the game is now also available on PlayStation 4, Xbox One, and Nintendo Switch, and includes all the changes, updates, and improvements that have happened since its original launch.

Playing the game on a console means being limited to using your respective platform’s controller, which is significantly limited compared to a mouse and keyboard, but the game’s developers have done a pretty good job integrating the game’s controls and functions to a controller. While it does take a bit of time to get used to the controls, they’re actually very intuitive once you get a handle of them. Soon enough, I was building and managing my hospital without having to consciously think about the controls. Additionally, the game’s pause function helps eliminate any potential delay you’ll have when browsing through the game’s menus with a controller. 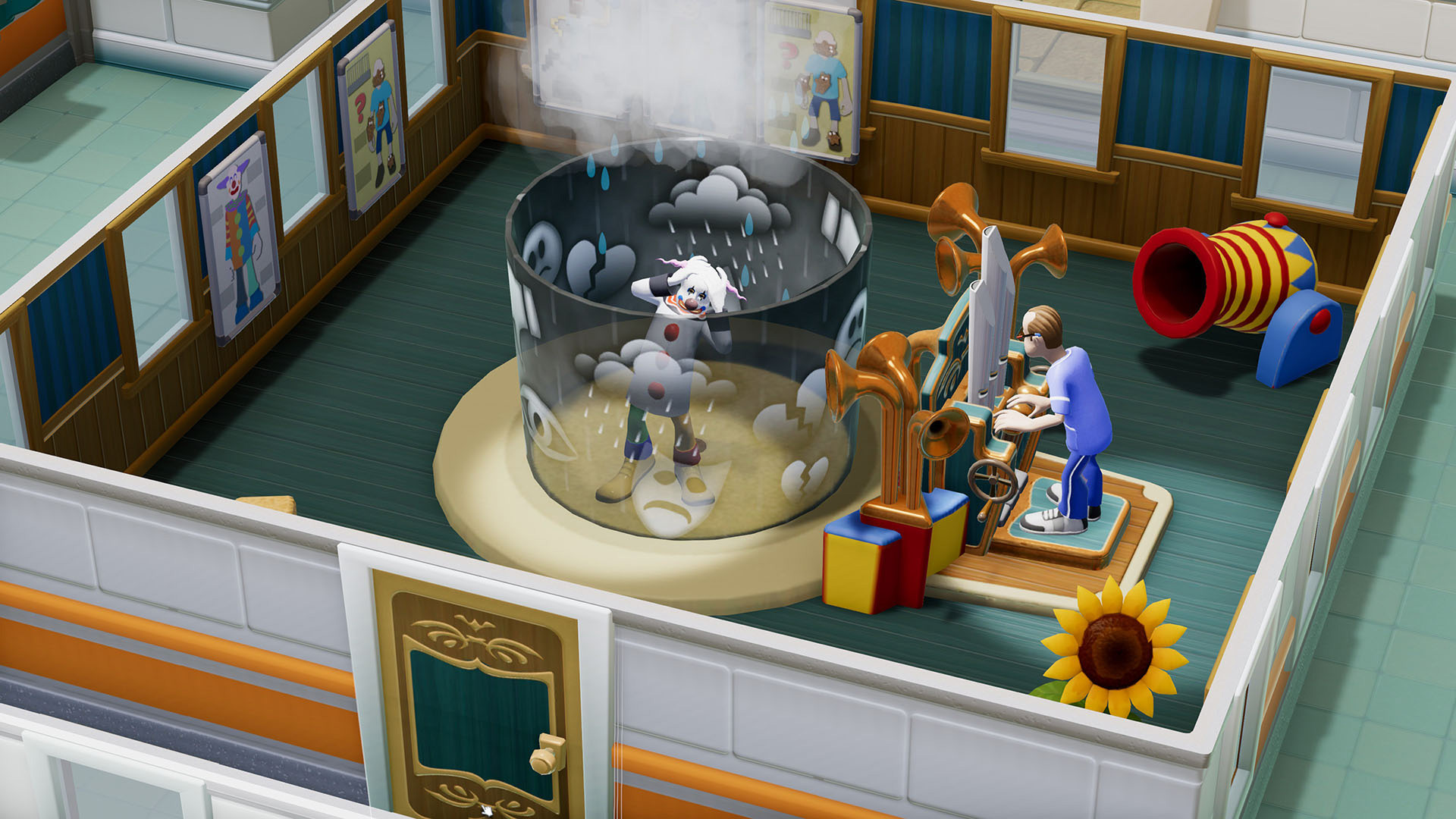 In Two Point Hospital, you play as the hospital manager in charge of building and managing hospitals for a burgeoning hospital organization. From constructing and maintaining each hospital to hiring staff and a whole lot more, you’ll have a lot of responsibilities to handle and keep track of as you progress through the game. Two Point Hospital also features the same colorful and humorous tone and aesthetic as its predecessor, from its character and world design. Although, in spite of its tone and aesthetic, Two Point Hospital’s gameplay is undeniably deep and complex.

Just like Theme Hospital, Two Point Hospital passes on using real-world diseases and instead features fictional conditions that are quite comical. Some examples include Light Headed, in which people literally have a light bulb for a head, Night Fever, an illness that makes people become impersonators of John Travolta from Saturday Night Fever, and Animal Magnetism, wherein people have animals stuck to their body. The game’s creative ideas for fictional illnesses makes the experience more entertaining and avoids any issues that may arise from using real-world diseases. 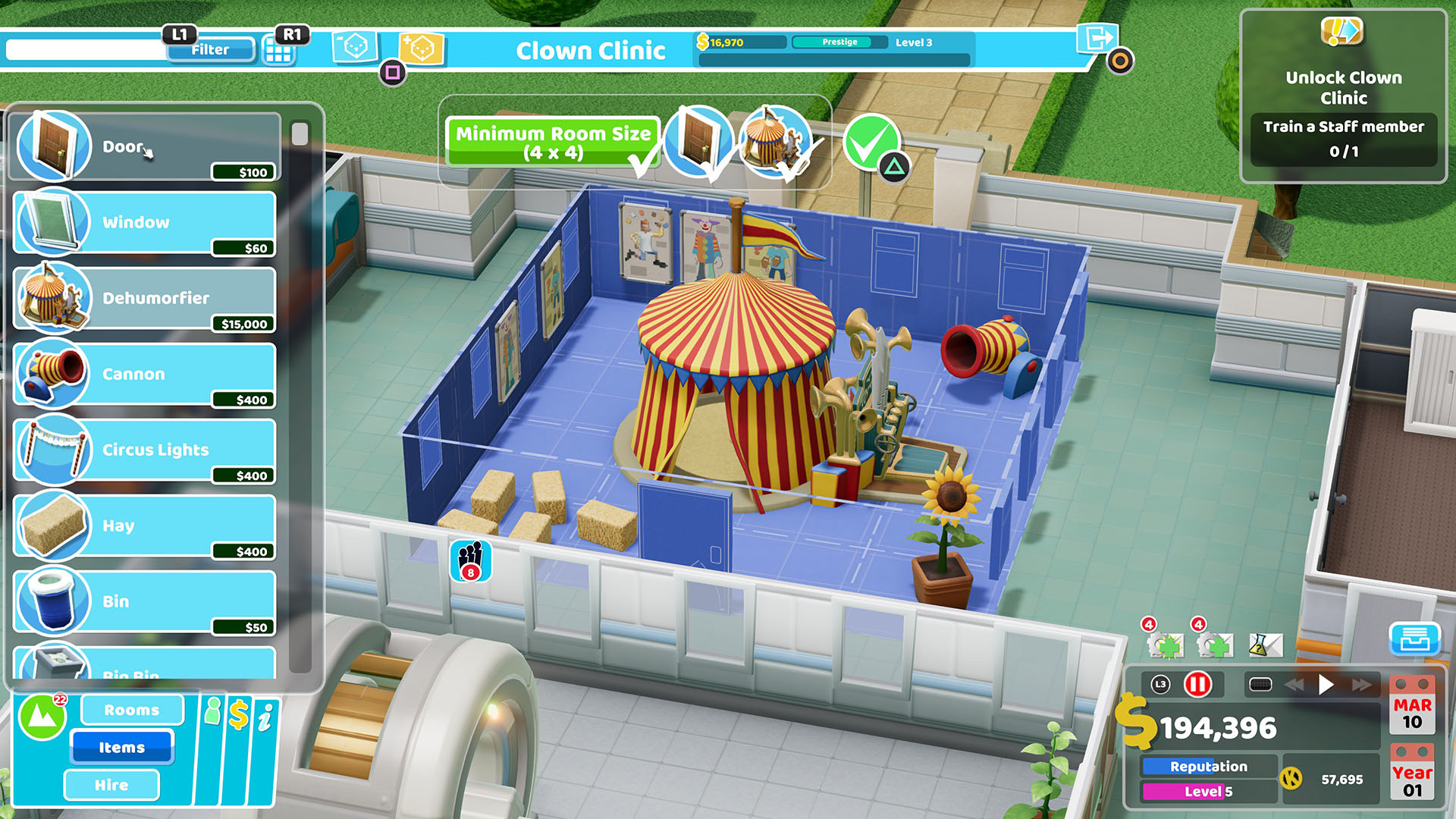 Two Point Hospital does a good job of easing players into its gameplay by starting you off with a smaller hospital and only a few rooms, personnel, and illnesses to deal with. It then slowly introduces more rooms, illnesses, and mechanics as you progress through each new hospital, which also not only feature larger buildings but also additional plots of land to erect even more structures on. Each of the game’s hospitals also have their own set of traits and difficulties for you to get through, such as different weather conditions as well as unique quirks like not being able to earn money apart from completing certain objectives or having access to only junior-level staff who you will have to train from scratch.

As you level up your hospital and complete the major challenges and objectives each hospital sets for you, your hospital’s star rating will go up to a maximum of 3 stars, which is ostensibly how you “complete” a hospital. Successfully raising your hospital’s star rating rewards you with money, Kudosh, and at times, unlock more items for you to use. While getting a hospital to 3 stars isn’t necessary to progress through the game, some of the item unlocks become really useful in either your future or previous hospitals. 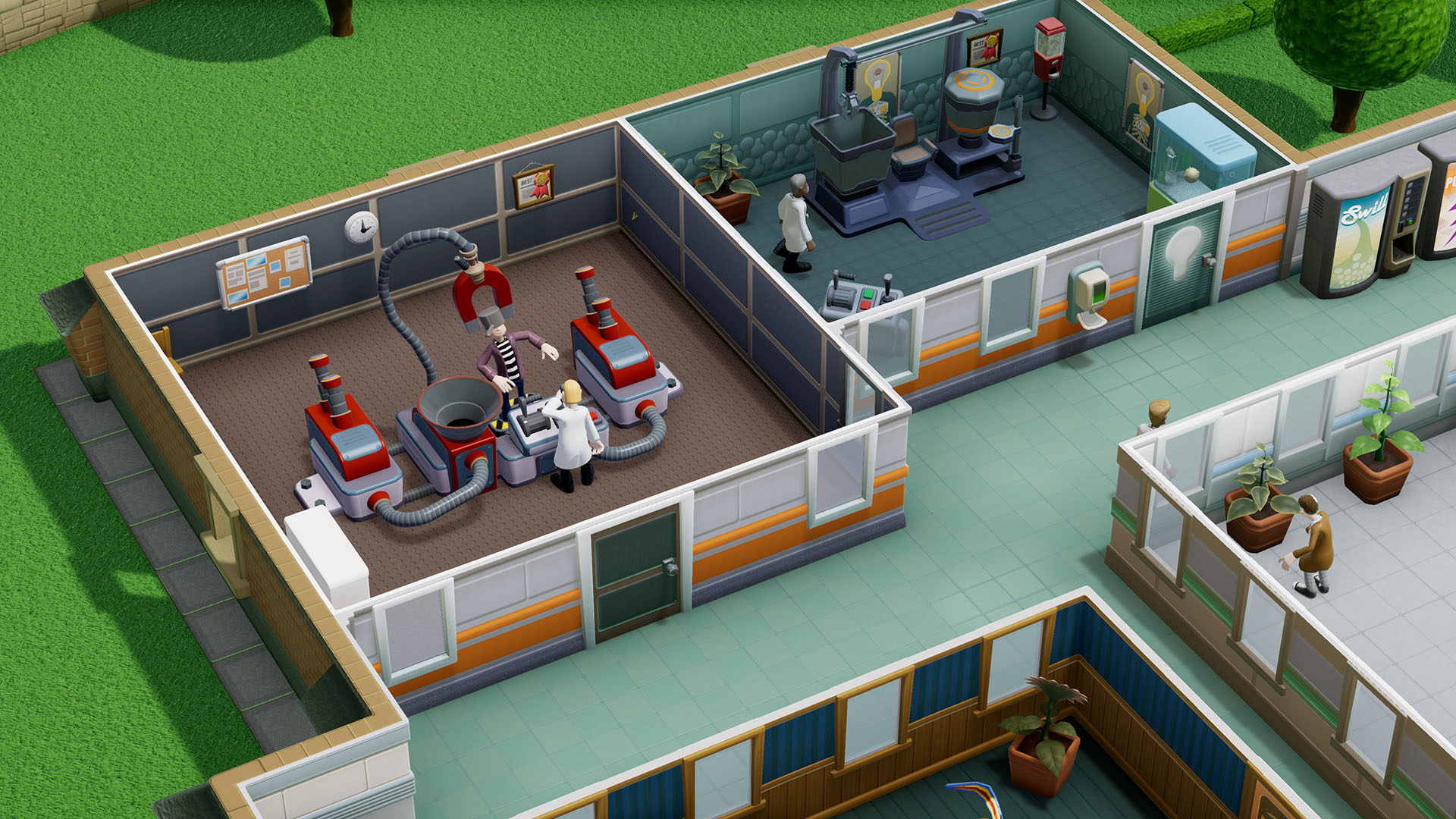 There are a myriad of items to choose from in the game that can help you improve several of your hospital’s important attributes including cure rate, efficiency, hygiene, and attractiveness. While the most basic and crucial are unlocked automatically as you progress, the rest and some of the best ones are unlocked using the previously mentioned Kudosh, which you get from completing challenges and achievements. Once you’ve unlocked an item using Kudosh, you’ll be able to purchase it with money to place it in your hospital.

You’ll also be able to customize and personalize your hospital rooms’ wallpaper, your personnel’s uniforms, and more. While they don’t really affect your hospital’s performance or your progress, it’s a nice feature that allows you to further make your hospital your own.

The Right People for the Job

Your hospital isn’t going to be able to run without personnel, so you’ll need to hire staff to begin operations and keep up with all the needs of your patients and facilities. You’ll need to hire doctors, nurses, assistants, and janitors, who each cover their own set of roles and responsibilities in the hospital. When hiring staff, you’ll be able to choose between less experienced but cheaper personnel that you’ll still need to train to gain their qualifications, which are bonuses to their capabilities, or you can hire more expensive employees that already have a random number of qualifications. It’ll be up to you to decide whether you have the time to train new staff or take on more capable personnel to quickly fill up your ranks and fulfill your needs.

Each potential hire will also have a random number of traits that could affect their performance. Some will get tired much slower than others, others will learn new qualifications at a slower pace, while some will generally be less happy. There are quite a number of possible traits that your candidates could possess so you’ll have to take a careful look at them before you decide to hire them. 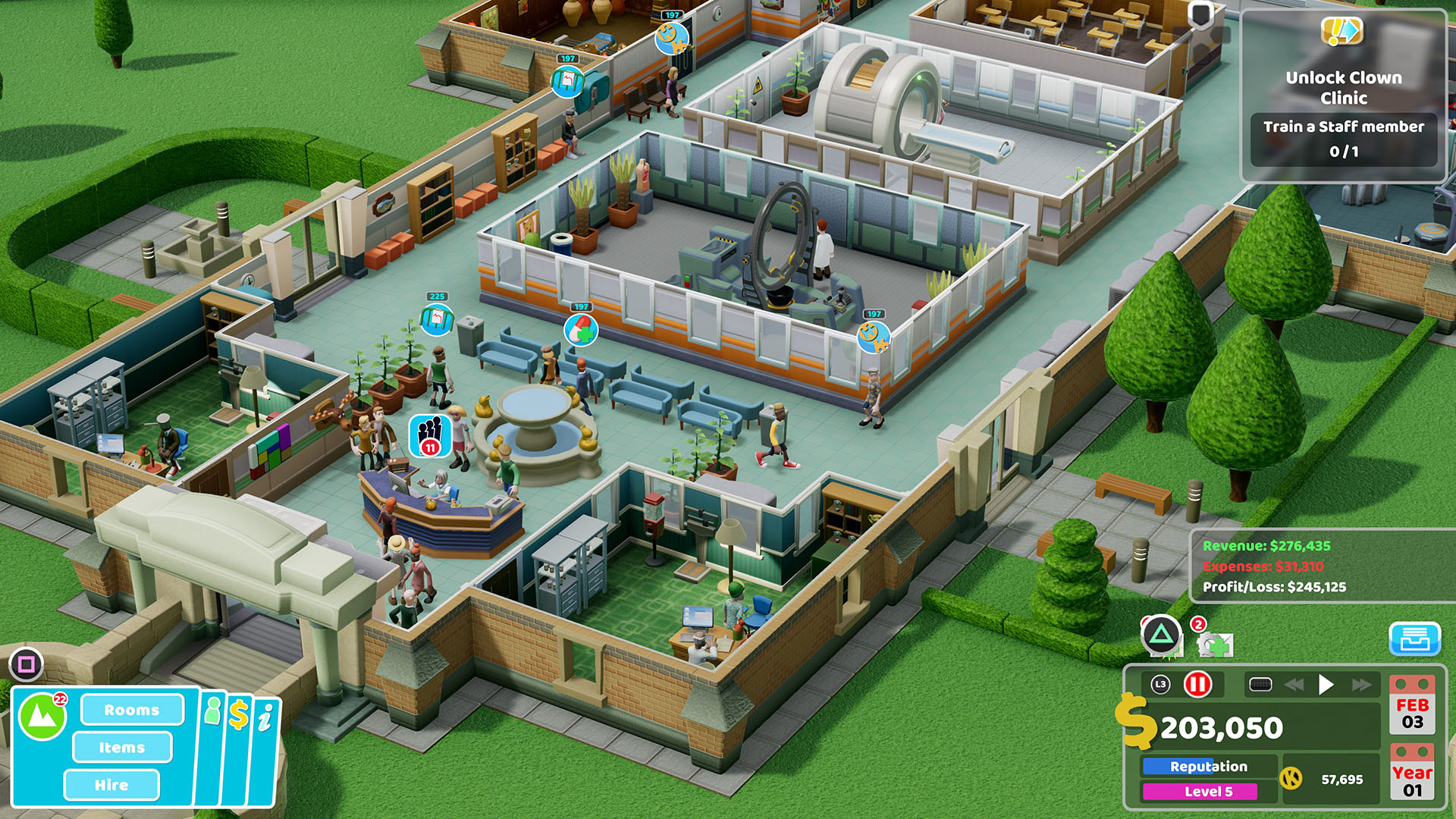 Some of the game’s later illnesses and corresponding treatment rooms can only be unlocked via conducting research on them, a mechanic that’s unlocked near the start of the game. Conducting research becomes an important part of progressing through the game’s latter hospitals as you deal with more new illnesses. Luckily, once you’ve successfully researched an item in one hospital, it will unlock for all your other hospitals so you won’t have to keep doing them for each hospital you progress to.

Apart from building your hospital, hiring staff, and treating illnesses, you’ll also have to keep track of your finances, manage your hospital’s policies, balance your staff’s salaries, adjust the pricing of your hospital’s services, and more. While it all may seem daunting at first, the game makes it easy to learn, understand, and manage, thanks to its interface design. The game also provides a lot of assistance in helping you keep track of what you need to do, with regular visual and audio cues and reminders. Additionally, you’ll receive regular hints and tips to help you improve your hospital’s operations.

Two Point Hospital has succeeded in not only keeping the spirit of the original Theme Hospital intact but also in transforming it into something exponentially better. The game successfully combines fun and lighthearted game design with deep and complex gameplay. The console release also excellently translates the game’s controls and functions for gamepads to make playing on console just as smooth an experience. All of that along with the game’s gentle difficulty and learning curve makes it into one of the best and most accessible management simulators available in the market today.