This War of Mine Review

Being a gamer my entire life, I have been exposed to a multitude of violence, questionable morality choices and gratuitous amounts of gore. Levels such as the controversial “No Russian” from Call of Duty where you slaughter innocent civilians drew no reaction from me. I consider myself apathetic when it comes to things like that in video games. That was, until I played This War of Mine.

This War of Mine is a 2D, side-scrolling, resource management type of game. The game itself has a similar feel to “The Last of Us” with the score and the post-apocalyptic setting, minus the spore infested zombies. Most games you play the hero soldier or the burley space marine but in This War of Mine, you play as a normal, everyday civilian. The game is set in a war torn eastern European country where you take control of a group of civilians trying to survive until the end of the war. You need to scavenge resources, craft items and fend off other hostile survivors.

The game is split into two parts, the day and night cycle. During the day, you get the chance to build items around your house like beds, a work bench, water catcher and so on. During the night, you get to send out one person from your group to scavenge a nearby location for supplies and resources for crafting or trading with other survivors. The night section of the game can get dangerous however if you do come across some raiders or violent survivors. 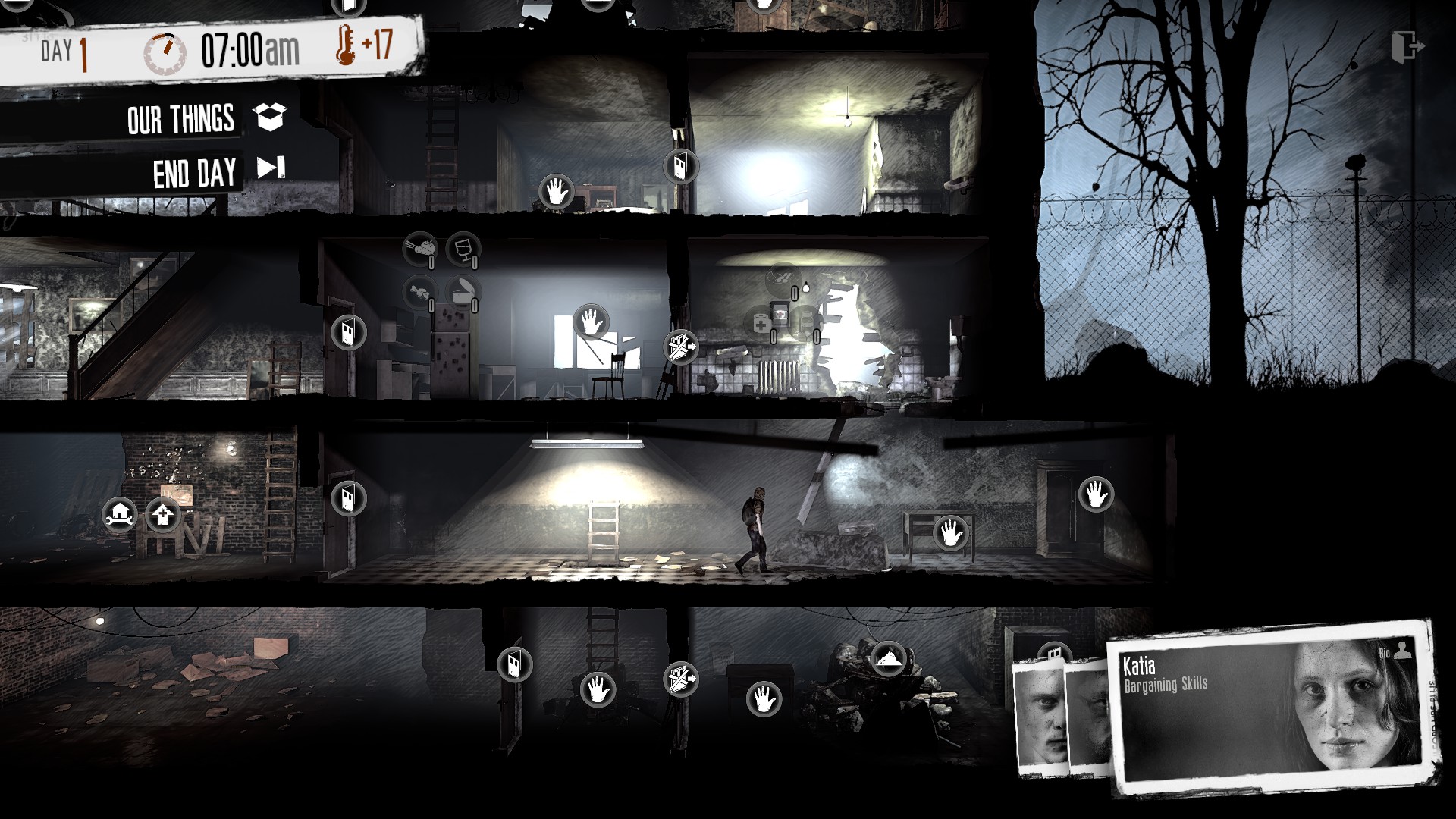 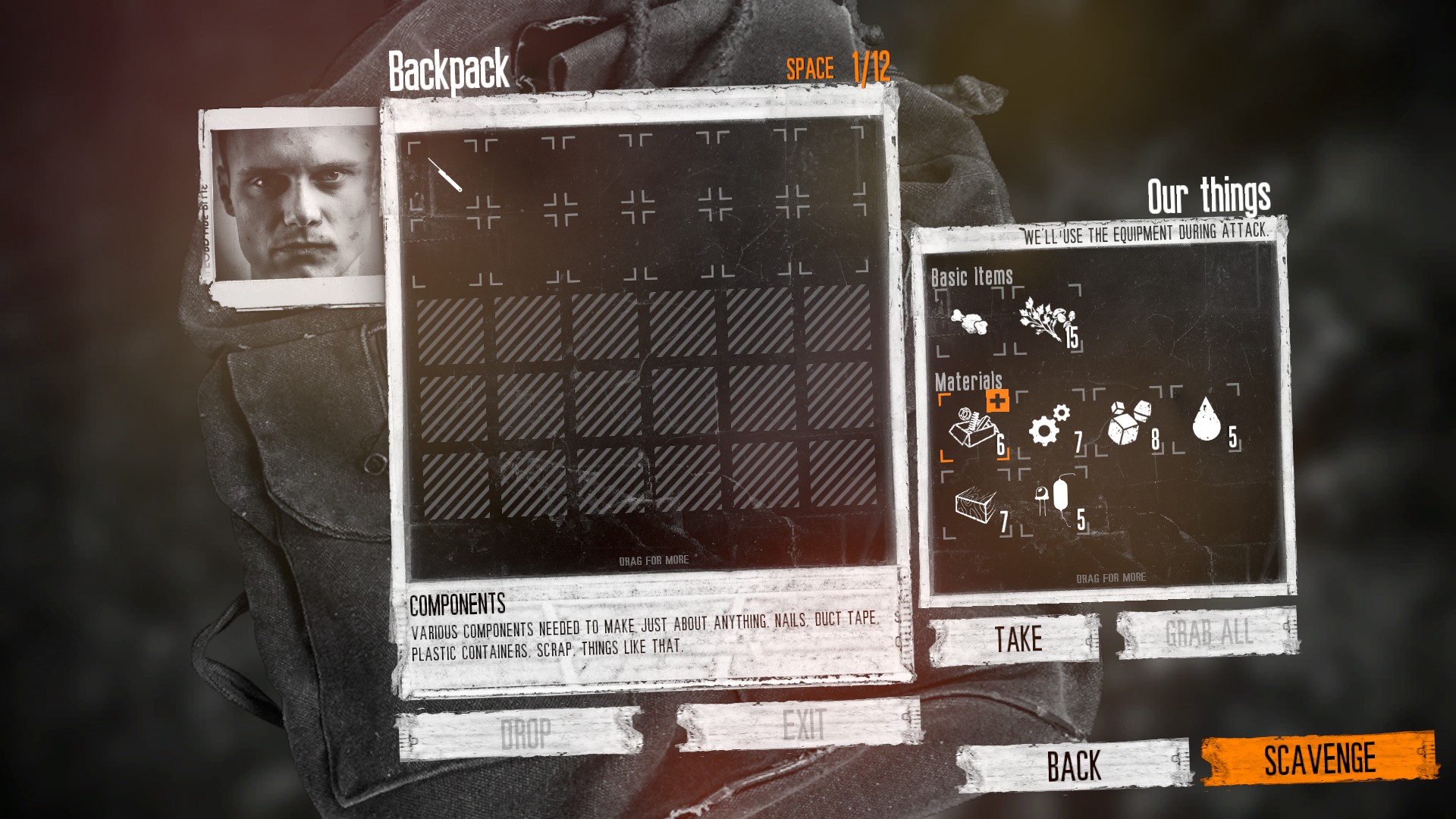 When I fired up my first game, I had the misfortune of having 2 of the 3 members being sick and everyone already hungry. After the first few days, I was unable to find food in a few abandoned buildings and my group was on the brink of starvation, I was beginning to feel desperate. That was until, a new location popped up and was marked as having lots of food. With a sigh of relief I continued to read the scouting summary of the location and discovered that an old couple lived there. I initiated the night cycle and sent one of my guys to said house, true enough an old couple was there. As I started rummaging through their kitchen, the old man started to plead and beg, saying his wife was sick, and they had no way of getting more food. But then, I thought to myself, my entire group is starving, they aren’t. I took as much food as my guy could carry and ran home. That’s the kind of choices you have to make in This War of Mine.

The game often brings you into these kinds of situations where you really need to make a choice, there is no “paragon” ending to be had here. This is where This War of Mine is at its finest. It feels like the developers really wanted you to experience the kind of hardships normal everyday people might go through during a war like this. I found myself thinking about that one choice for the entirety of the next real life day at times finding myself regretting the decision. In game, the guy I sent to take the supplies even got depressed and kept regretting the action of stealing from the old couple until I could get his morale up again. 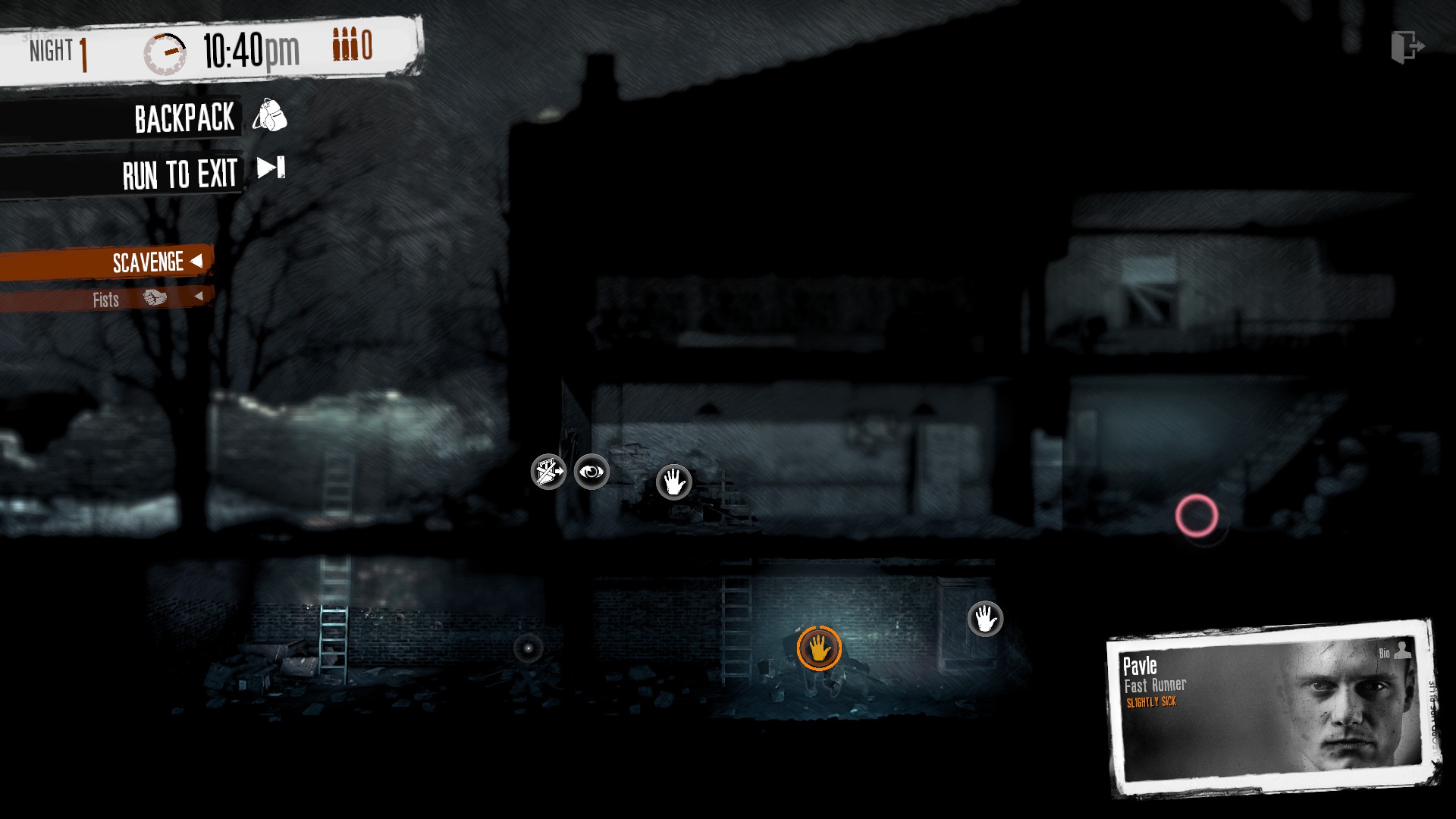 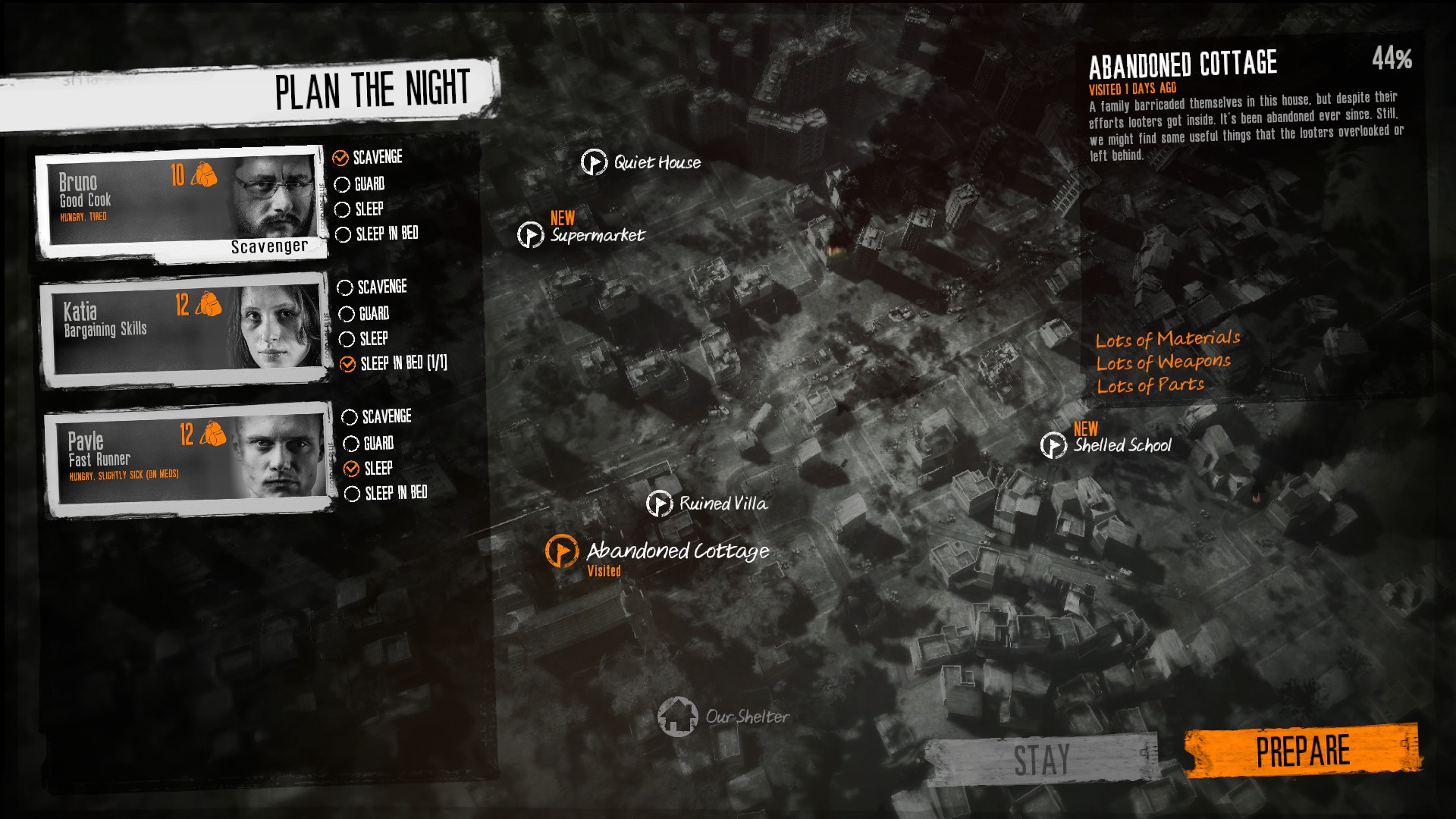 This War of Mine is a great game that truly gives you an awareness of how being in a situation like this would somewhat be like.  The developers also included a donation link at the start of the game to a charity called “War Child”. It’s an organization that provides assistance to children in war torn areas.

As an indie game, it does at times, show it is definitely an indie game. The game lacks a few basic features like keyboard shortcuts and one missing element that I truly wish they had was full voice acting. That would have brought the game to new levels of greatness. The interface itself could even be easily brought to mobile devices if they only had the budget.

I highly recommend this game for any type of gamer out there, not only is it a great game, but it also gives you a nice representation of the difficult decisions one has to make in a situation like that. 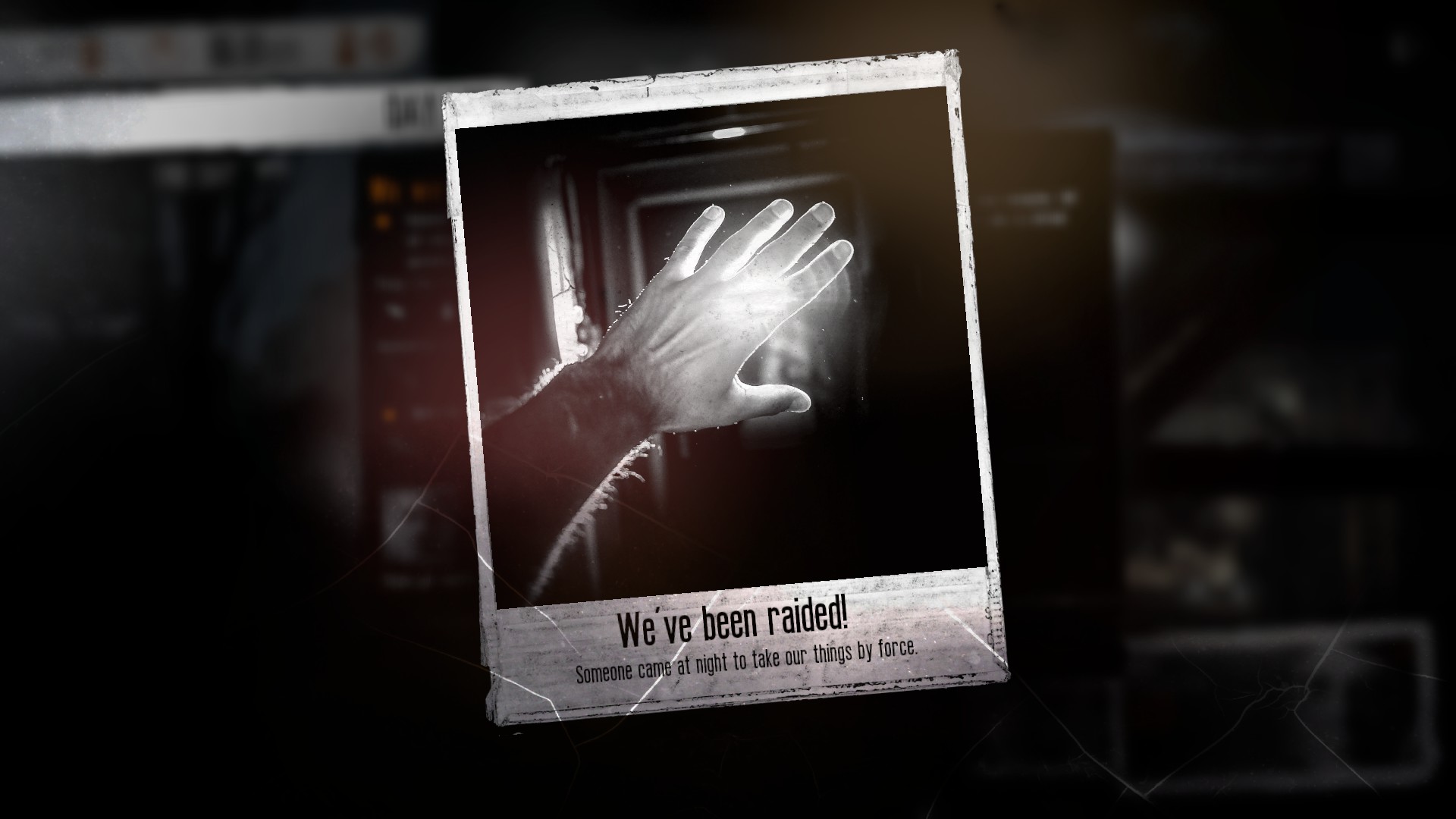