It’s a noble goal, if somewhat exhausting to actually go through. I never played the original Superhot, nor its VR game, but beating Mind Control Delete’s 100 nodes (read: levels), where each node contains a handful of battles, soon reveals itself to be a far more difficult endeavor than at first glance. 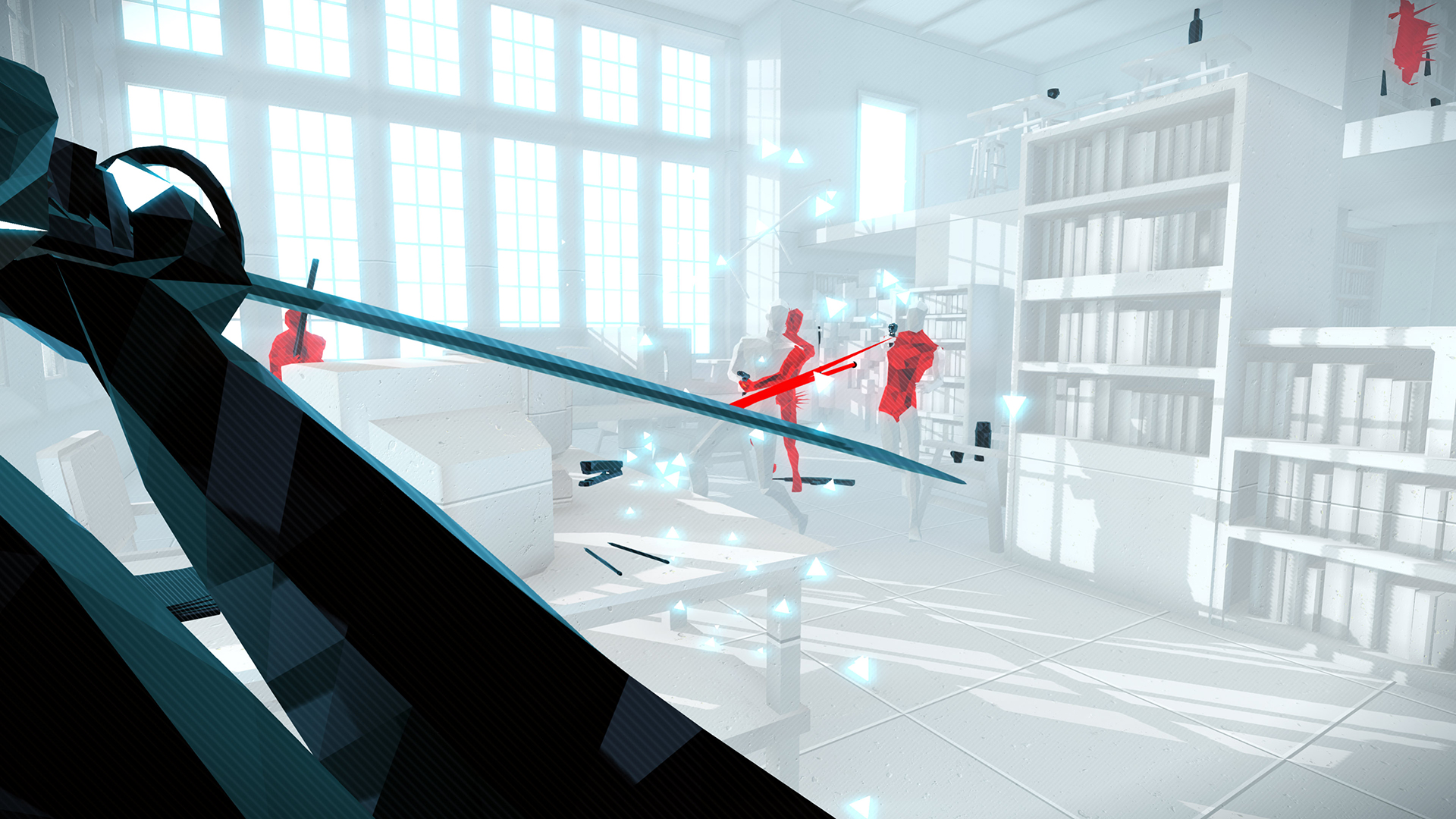 Superhot is a game of short bursts: time only moves when you do. This frankly brilliant approach to the FPS format turns an action game into a careful puzzle, where you freeze time and slow bullets to a crawl as you think up a plan to not instantly die, then execute that plan and freeze again when you inevitably miscalculate just how screwed you really are. This slowdown to speedup loop, like a mid-2000s action movie, becomes second nature the longer you play and soon enough I was leaping off balconies, sidestepping bullets, and carving up whole rooms of enemies with a katana in no time at all.

The “whole rooms” bit is hardly an exaggeration. To keep a sense of danger and urgency over a player who can control time, Mind Control Delete starts throwing hordes upon hordes of enemies at you, many of them armed to the teeth with guns and swords and others featuring special abilities like being invincible unless you strike their one exposed body part or exploding into a shower of bullets upon death. These enemies can spawn from any of the doorways in a level, often from places you cannot see. It isn’t uncommon to strike one down, only to turn around and find four more closing in on you, with one of them already looking down the barrel of their gun. Even with your power to stop time, bullets still crawl at a snail’s pace and your limitation of not being able to move within the stopped time can make battles feel like fighting a flood; it becomes a struggle just to keep your head above it all. When you inevitably mess up and lose all your hearts, you are offered a shot at restarting the node. All you have to do is tell the game you want more. 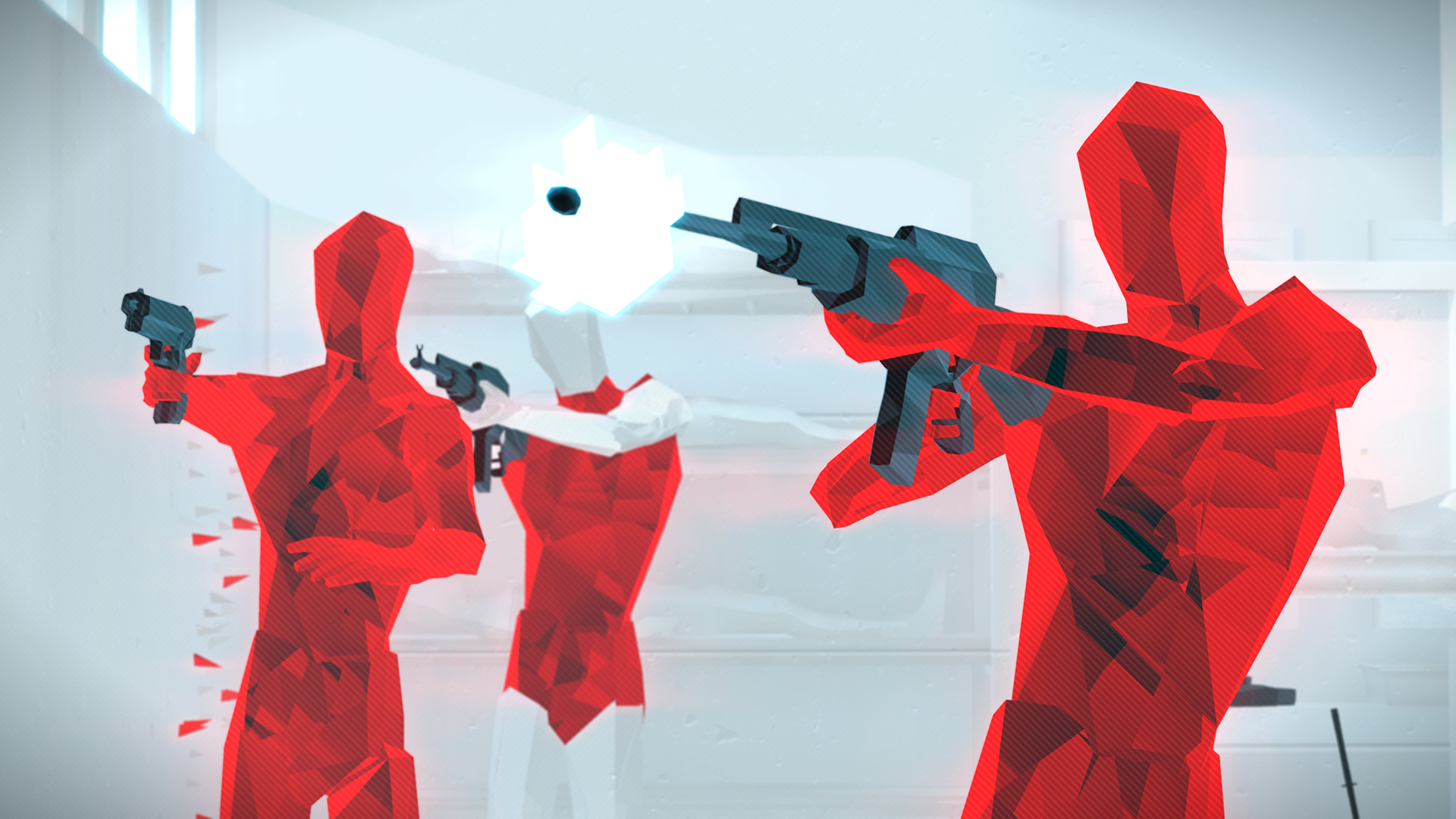 The game always wants more. Mind Control Delete screams for “More! MORE!” as you kill and die without end, flashing you back to the start of a node on death as quickly as you end one, atop a mountain of bodies broken like shattered glass. The game offers you “hacks” as you hack, whack, and smack your way through a node, with each hack granting you special perks such as the ability to start battles with a katana or being able to simultaneously reflect every bullet currently flying in midair. You’re offered a choice between two at a time as you go through a node and which ones you get are randomized. This introduces an element of luck to your node run, as a certain combo of perks could become very powerful indeed, while others (such as exploding upon taking damage) are not very useful at all. What perks you could roll increases as you conquer nodes, with Mind Control Delete offering you to take – you guessed it – more and MORE. 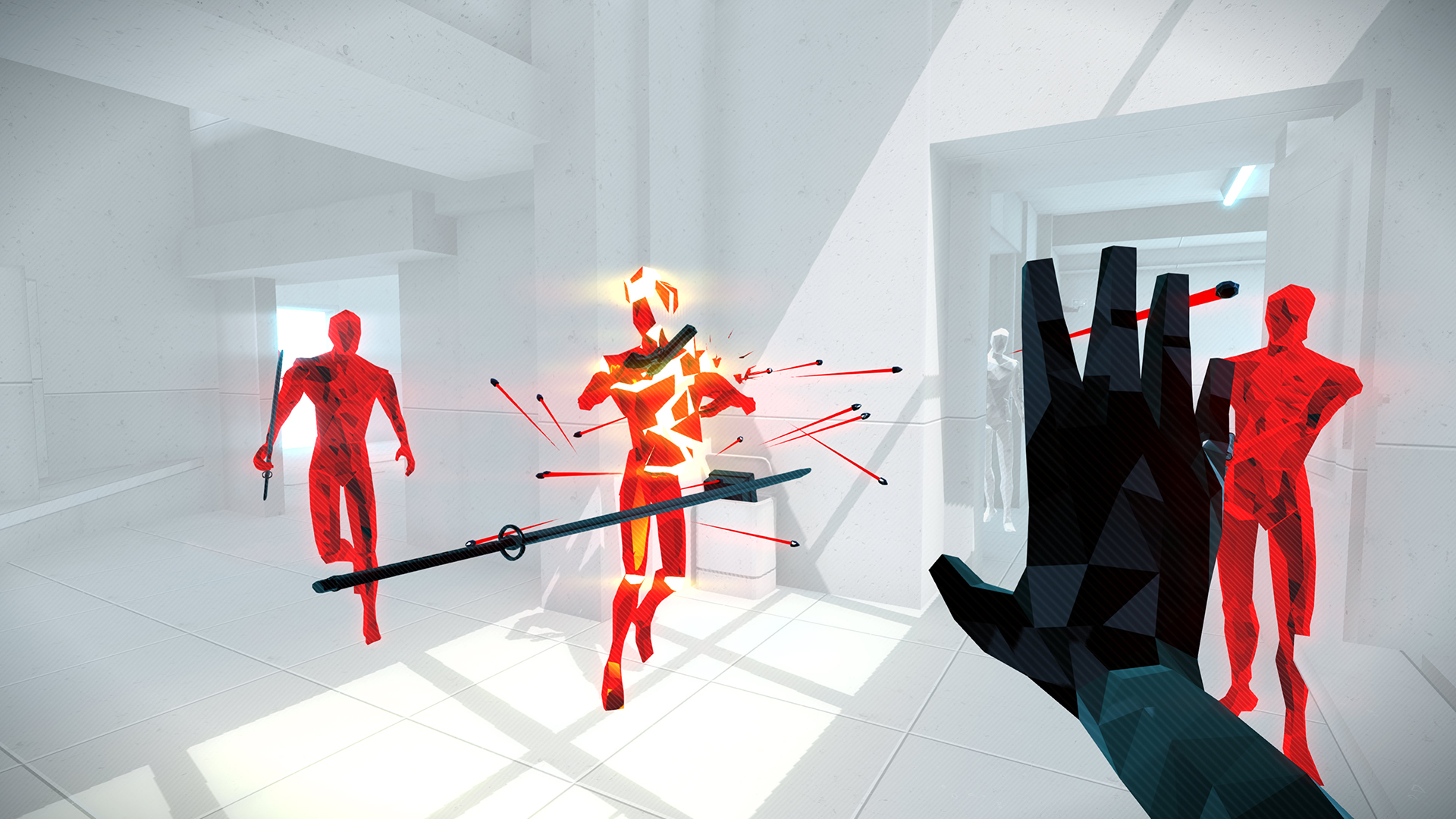 Eventually though, despite the ridiculously fun time mechanic and the promise of more cool powers to play with, Mind Control Delete becomes tiring. No amount of procedurally generated nodes can hide that you’re just fighting the same set of guys in the same rooms you’ve already seen dozens of times before, aiming to collect the most effective combo of perks you know work for you and ignoring the rest, with the only real change being where the good weapons are spawning. It gets repetitive quickly and isn’t helped by the extremely minimalist visuals making every single stage feel like the same brawl in the same bleached-white world, colored only by the red death pouring in like ants. Soon enough, you’ll be answering its calls for more and more with “That’s enough.” At least, I certainly did.

Perhaps at the end of the day, Superhot: Mind Control Delete should be experienced in the same way its unique approach to combat does: In short bursts of frenzied energy, stopping as soon as the situation begins to get out of control. It certainly is fun and the thrill of beating a seemingly unfair map and then watching a replay of you kicking ass in real time is quite effective at keeping you wanting more.