Star Wars: Fallen Order was initially teased as an unnamed Star Wars video game project by Respawn Entertainment back in 2016, a year before the studio was purchased by EA. Two years later, the latter would officially announce Star Wars: Fallen Order at E3 2018. The new game was announced to be a third-person action-adventure game set sometime after the events of Episode III: Revenge of the Sith, putting it after the Jedi Purge and the rise of the Galactic Empire, an era in the Star Wars ethos that is always ripe for new stories. 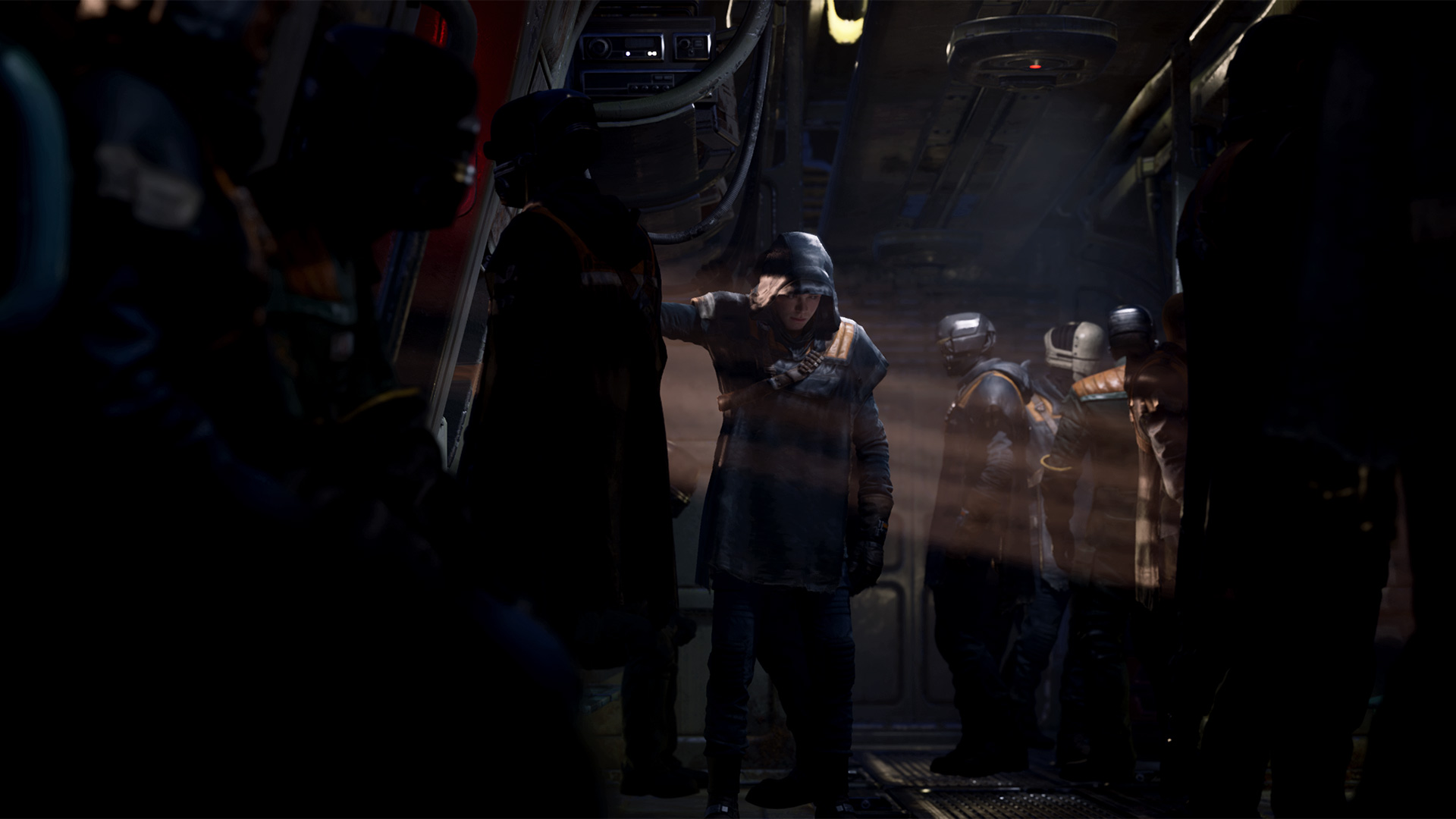 Fallen Order puts you in the shoes of Cal Kestis, a Jedi padawan who has been in hiding since the Jedi Purge. Working as a scrapper on the planet Bracca, Cal is discovered by the Empire after being forced to use his powers to save his friend and coworker. Cal is then thrust into a mission to find a missing Holocron when he is hunted by Sith Inquisitors and is subsequently rescued by Cere Junda and Greez Dritus, his companions for the rest of the game. Cal and crew must now race against the empire to retrieve the artifact that could either save or doom the future of the Jedi Order.

Apart from Cere and Greez, Cal also meets and is joined by a tiny bipedal droid named BD-1, who not only becomes Cal’s constant and closest companion but is also a crucial character in both the game’s narrative and gameplay. BD-1 also receives several upgrades throughout the game that gives him the ability to hack certain machines and droids as well as travel up ziplines. These abilities not only help Cal progress through the game’s story and explore its maps quicker but also reach previously inaccessible areas, making more exploration possible. 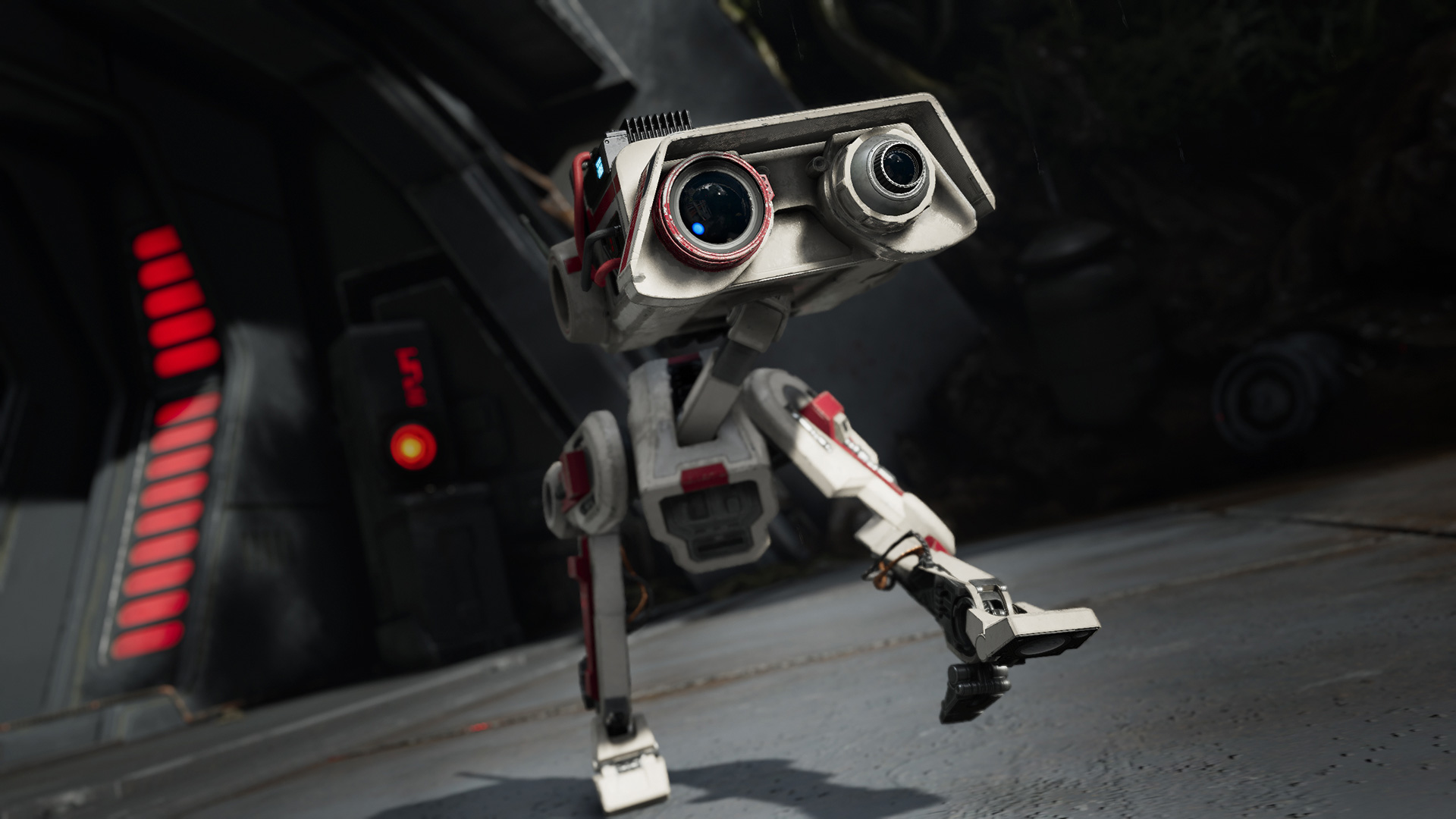 Given the point in time the game is set in the Star Wars timeline, it also isn’t surprising that Cal runs into several familiar faces from the more popular Star Wars properties. Several of the game’s locations and some of the names brought up in its dialogue also reference the wider Star Wars universe. The number of cameos and references in Fallen Order help its new characters and narrative feel more a part of the universe’s larger lore and story without taking the focus away and distracting from its own plot.

As you progress through the story, Cal also slowly relearns the skills and abilities his former Jedi master taught him. Skills and abilities he blocked from his memory, whether deliberately or unconsciously, due to the trauma inflicted by the events of the Jedi purge as well as the period of time he was in hiding and unable to utilize them. To achieve this, the game utilizes flashbacks to both give us a glimpse of Cal’s past while also acting as a tutorial of sorts for the skills and abilities. Fallen Order is able to successfully mesh its narrative and gameplay like this in more ways than one. 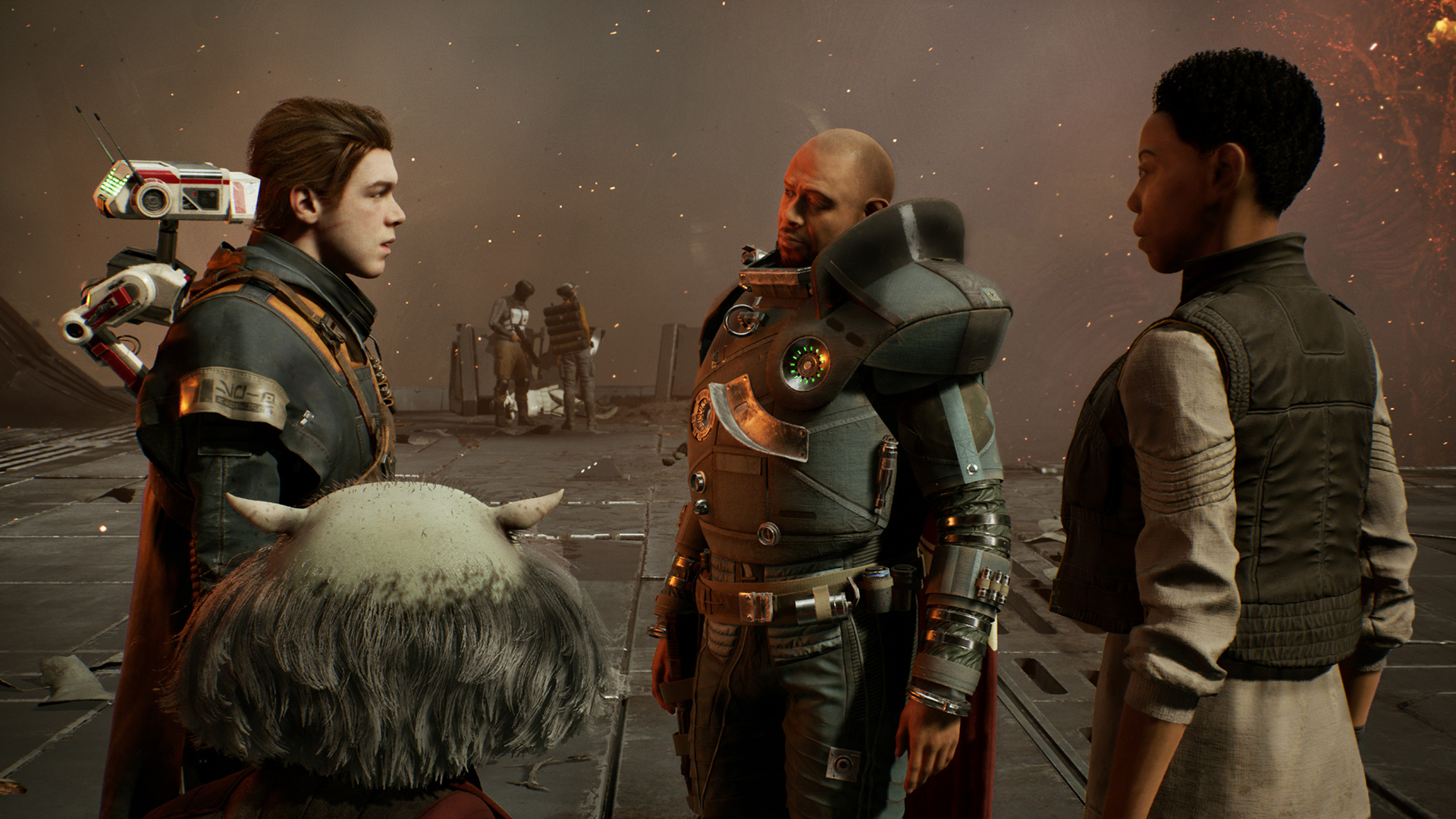 Apart from the game’s larger objective as well as the foes and challenges in front of them, Cal and his companions also have to deal with their own respective internal struggles. From Cal dealing with his personal trauma and doubts to Cere dealing with her past and the choices she’s made up to this point. The character development of each member of the main cast blends quite well with the game’s narrative and helps the story feel deeper and more relevant than it initially presents itself to be.

Fallen Order also features several impressive cinematic sequences and cutscenes that, like its characters and narrative, meshes incredibly well with its gameplay. Respawn has always been proficient at creating cinematic moments in video games that smoothly intertwine with its gameplay, as seen in both of their Titanfall games, and they’ve successfully done the same with Fallen Order. The many cutscenes are also well-divided and purposed between exposition, character development, and excitement. 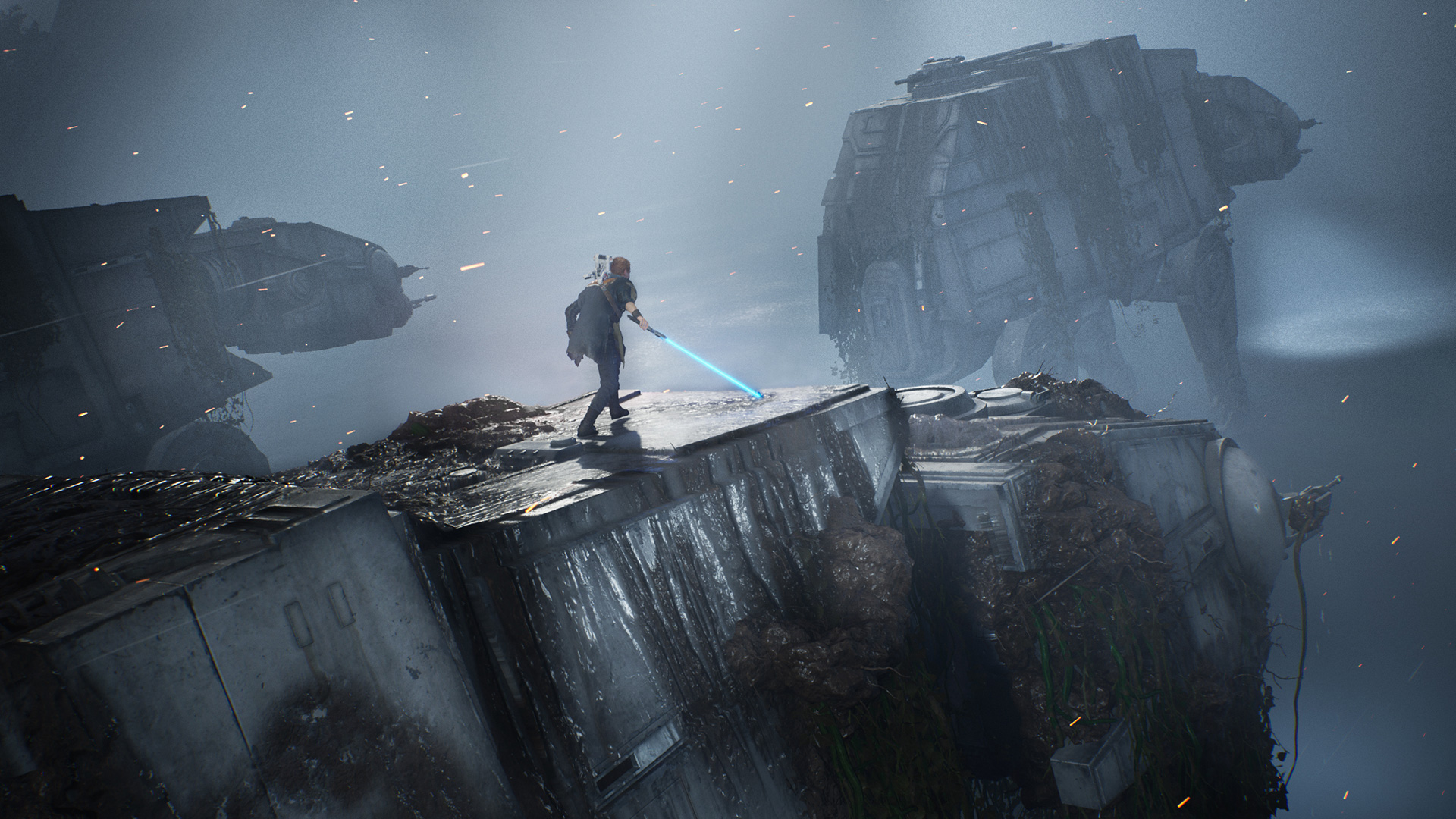 A Soul Of Its Own

Fallen Order takes the popular Souls-like formula and modifies it to suit the faster and more active fighting style the Jedi have come to be known for. It attains an impressive balance between playing a powerful Jedi and providing a challenging experience. So while you’ll still get to perform some pretty flashy moves and attacks with your lightsaber, the game doesn’t always make it easy to execute them. Oftentimes, you’ll have to successfully dodge, block, and, most especially, parry enemy attacks first.

Combat in Fallen Order somewhat centers around your and your enemy’s stamina bar. Each time you successfully block an attack, your stamina bar is depleted and when it reaches empty you become staggered and vulnerable to attack. The same can happen to your enemy but their stamina bar can also be depleted, at a much faster rate, when you successfully parry one of their attacks. Parrying attacks also doesn’t consume any of your stamina, making it one the optimal way of successfully staggering enemies. 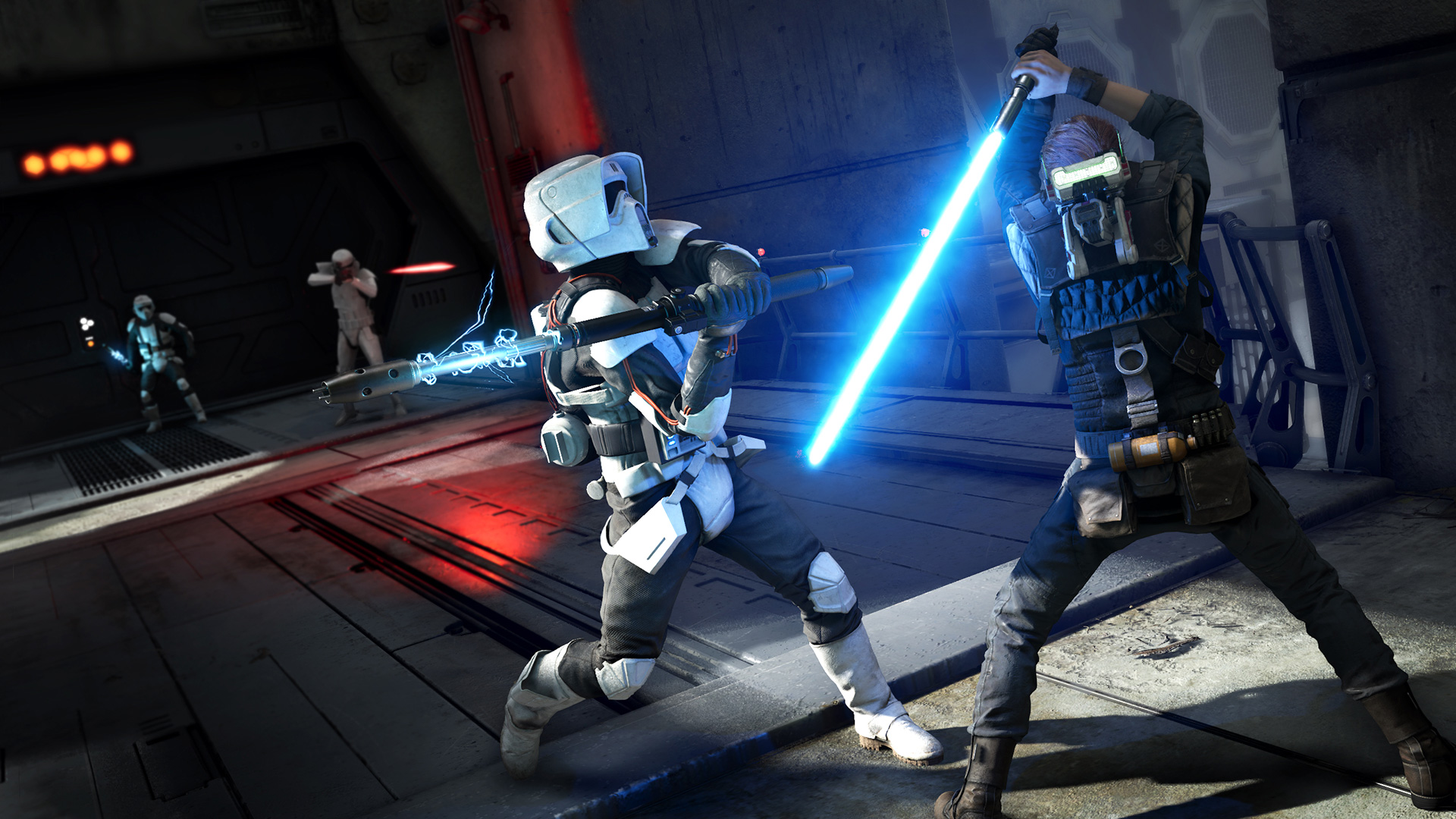 The game’s combat system, with its influences from Souls-like titles, may seem daunting or intimidating to get into. But most of the enemies in the game, including some of the bosses, have set abilities and patterns you can learn and watch out for to make it easier to time your movements and attacks. Unblockable nemy attacks also have both visual and audio cues to make it easier for you to time your dodges. It must be noted though that at higher difficulties, the window of time to parry an enemy attack is much smaller.

Apart from the usual battalions of Stormtroopers, Cal will also have to fight a large variety of foes, from indigenous beasts and killer droids to bounty hunters, members of the Inquisition, and more. The continuously growing variety of enemies and the number way the encounters are set up keeps the game’s combat from becoming monotonous and repetitive. And oftentimes, the game tries to ramp up the difficulty of the fights by increasing the number and variety of opponents, which makes it harder to manage and time your moves.

There are also two types of boss-level fights. The first are hidden, optional bosses that are stronger versions of several enemies that are significantly more difficult but give a lot of experience when defeated, making them somewhat worth the effort to take on. Then there are the story boss fights that are even more difficult. With their significantly larger health bars and more damaging attacks, the boss fights test both your skill and ingenuity in utilizing all the abilities at your disposal. 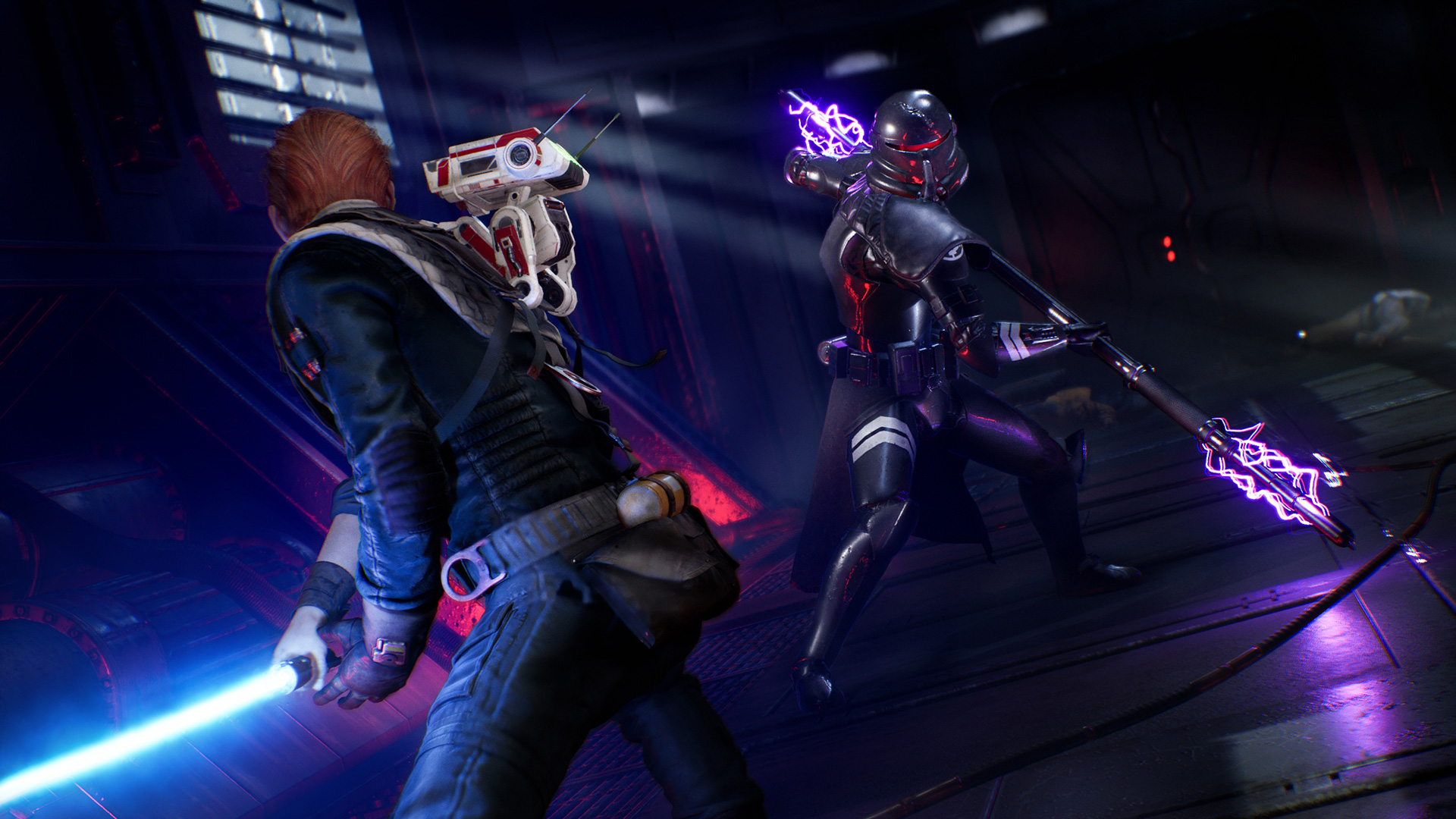 The Force Is With You

Players will have access to basic lightsaber attacks and combos as well as more powerful Force Attacks that use up some of your Force meter. From the start of the game, you’ll have the ability to use the Overhead Slash Force Attack, a slower but significantly more powerful attack, which is great at dealing a large amount of health and stamina damage. You’ll then be able to unlock more Force Attack variants and abilities as you progress through the game, from leaping attacks to lightsaber throws and more. 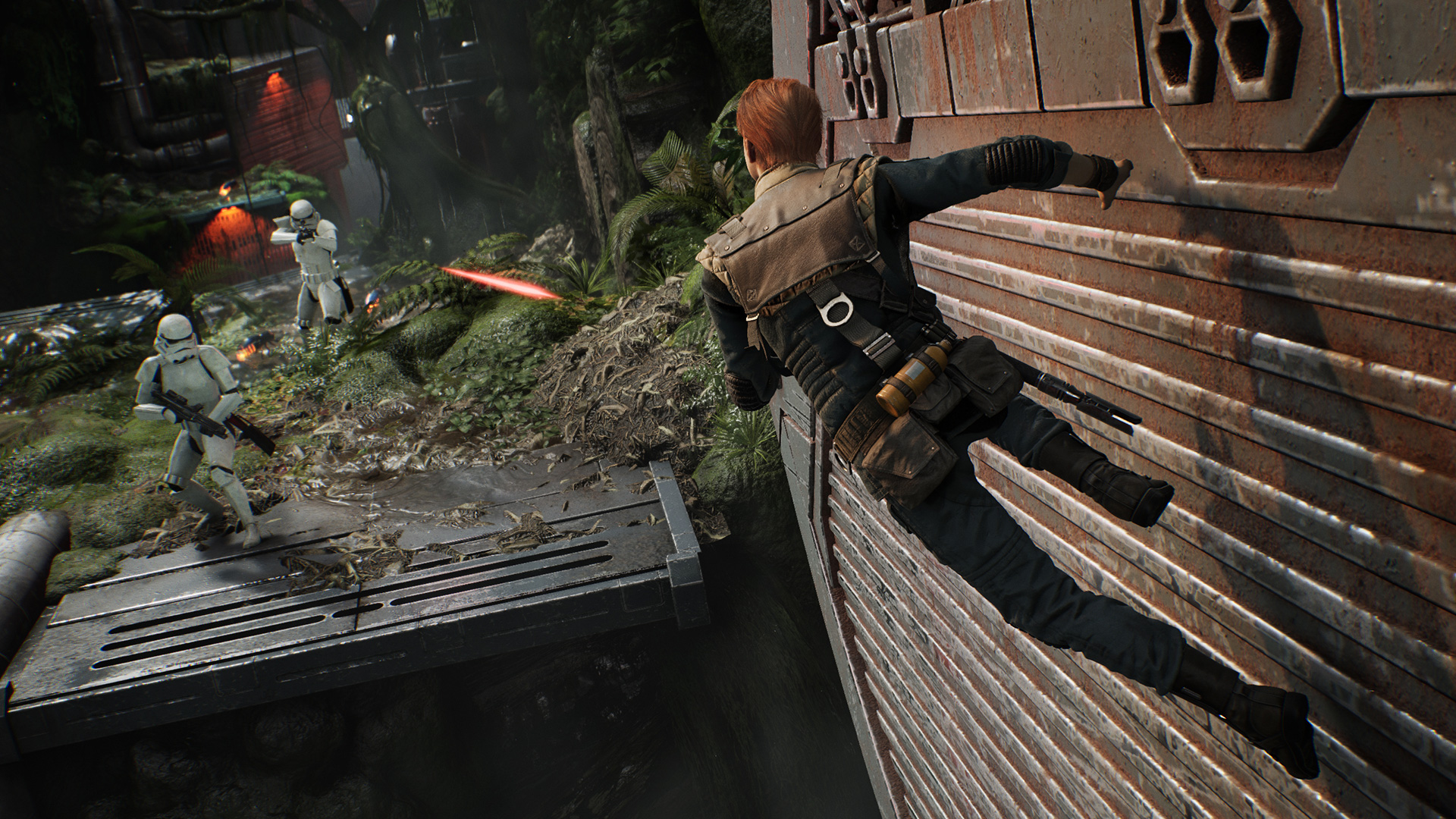 The skill tree is divided into three sections: Force, Lightsaber, and Survival. The biggest of the three sections is the Lightsaber branch, which is where you can obtain new Force Attacks and normal combo attacks, upgrade them, or generally increase your damage. The Force skill branch expands most of Cal’s Force powers, either making them stronger or giving them additional effects. Cal’s maximum Force meter, and Force meter recovery can also be upgraded through the Force skill branch. Lastly, the Survival branch is where you can upgrade Cal’s health bar and recovery as well as his defensive abilities such as blocking, dodging, and deflecting.

As previously mentioned, the game limits the use of these abilities via a Force power meter, which can be refilled by successfully landing hits, killing enemies, or using Meditation save points. Each of the game’s Force powers or Force Attacks consume a different amount of your Force meter, which limits the variety and number of abilities you can use in a single fight. Some of the game’s more drawn out encounters will force you to think more economically and strategically about their usage. 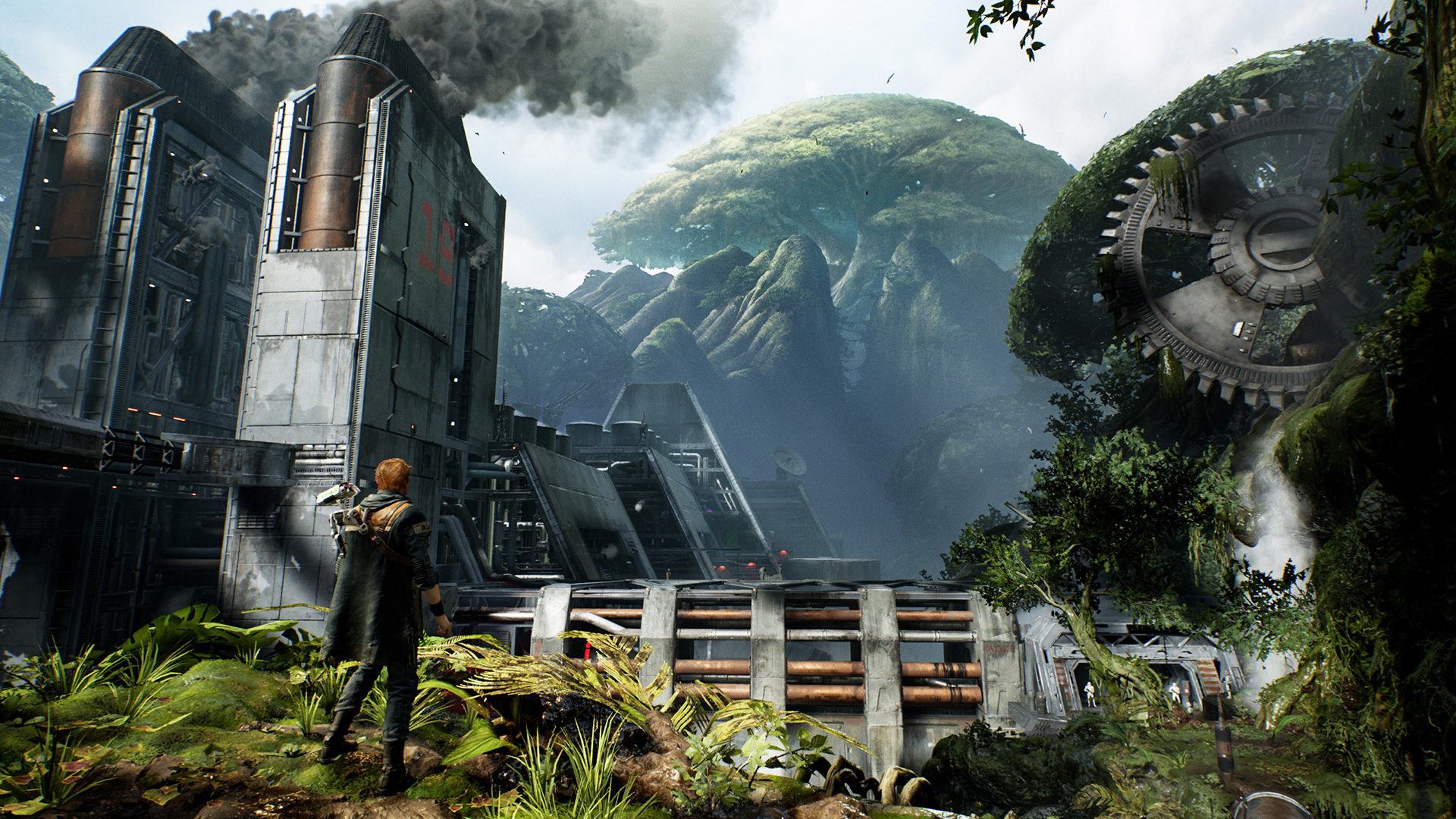 The same goes for the game’s healing/recovery items. BD-1 is able to store and provide Cal with stim canisters which he can use to heal and, if the ability is upgraded on the skill tree, refill the Force meter. But the amount of canisters BD-1 can carry is limited and can only be refilled at Meditation save points. While the amount of healing and number of canisters can be unlocked in the skill tree or discovering the hidden upgrades around the different maps, respectively, it’s still limited, which can make resource management important in some of the game’s longer fights.

Fallen Order’s gameplay isn’t just about combat though. It also features a wide array of platforming and puzzle sequences along with map exploration, all of which help highlight the game’s beautifully crafted and designed environments across the several planets Cal and crew visit. Some of the Cal and BD-1’s upgrades can only be attained via exploration and puzzle solving, which helps encourage players to really explore each of the game’s maps. And while the puzzles, which will have players utilize Cal’s growing array of Force powers, aren’t impossibly difficult, they do provide a fun challenge and a nice break from its tense combat.

Star Wars Jedi: Fallen Order shows just how good a Star Wars game can potentially be when done right, combining a simple yet engaging story with well-crafted, focused, and challenging gameplay to create an experience that you don’t often see in Star Wars games these days. While Respawn’s take isn’t perfect, it’s definitely stands in stark contrast against other Star Wars games of the past few years. The way the game meshes its characters, narrative, and gameplay into a single cohesive experience is impressive and its focused story and gameplay makes for a tighter and incredibly more enjoyable experience.