There’s a part of Red Dead Redemption 2 where the Van Der Lindes, the gang of protagonist Arthur Morgan and the first Red Dead Redemption’s John Marston, stroll up to an old slavery plantation manor. The Van Der Linde men stand in a line, the better to show off their numbers and their guns, as the manor’s guards train their rifles on them. The night is dark and the tension in the air so thick you could set it aflame, and yet the gang leader Dutch Van Der Linde still attempts to talk it out with the manor’s owners. The sole demand is simple. Reasonable even: Give us back our boy Jack. The manor’s owners refuse, of course, so Dutch and the gang make their argument a little more convincing with the aid of several dozen bullets in several dozen heads.

It’s one of my favorite scenes in the game. Everything in it, the atmosphere, the acting, the cinematography, the sheer rage that permeates every step, line, shadow, and gunshot, it all makes for dramatic power the likes of which only one other mission in RDR2 manages to match. It is absolutely the reason why this game should be played and an excellent example of the medium’s ability to go toe to toe with cinema. There was, however, one burning question in my mind as I played through that mission. Why did it have to take me so much bullshit to get here? 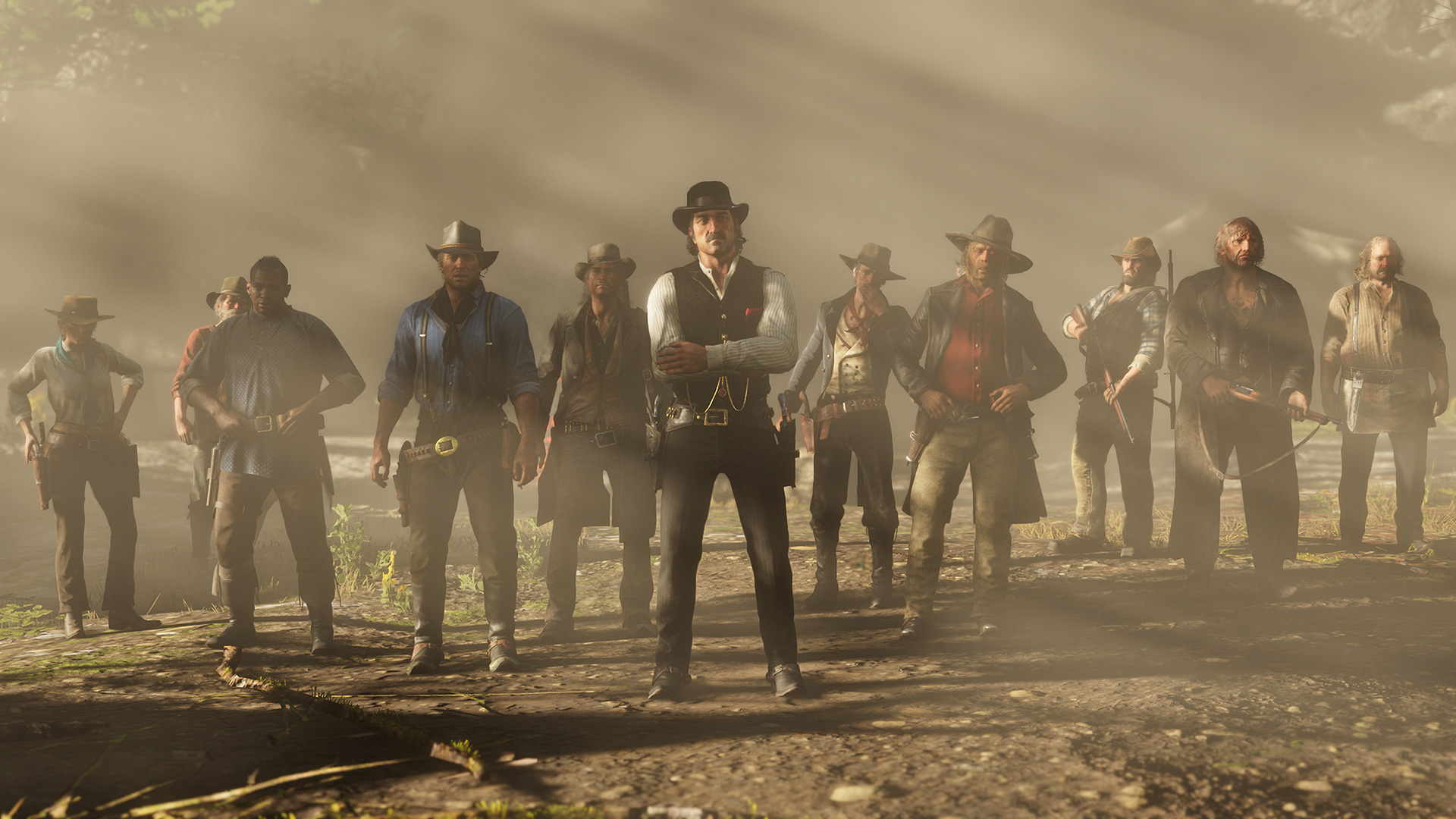 Let’s get this out of the way: Yes, Red Dead Redemption 2 is good. It’s a Rockstar Games production, you know exactly what you’re getting into. The Wild West is lovingly rendered, with a much more diverse map full of snowy mountains, creepy swamps, rolling plains, and cozy pine forests that make the first game’s massive dustbowl look pitiful in comparison. The game’s narrative, voice acting, and presentation are also top-notch, boasting some stellar performances from its cast and some of the coolest moments I’ve ever seen from Rockstar, with the high of climactic action scenes and the gravitas of subtle character moments being given equal attention. There was obviously a titanic amount of work and care put into RDR2, and for the most part, it is greatly appreciated. 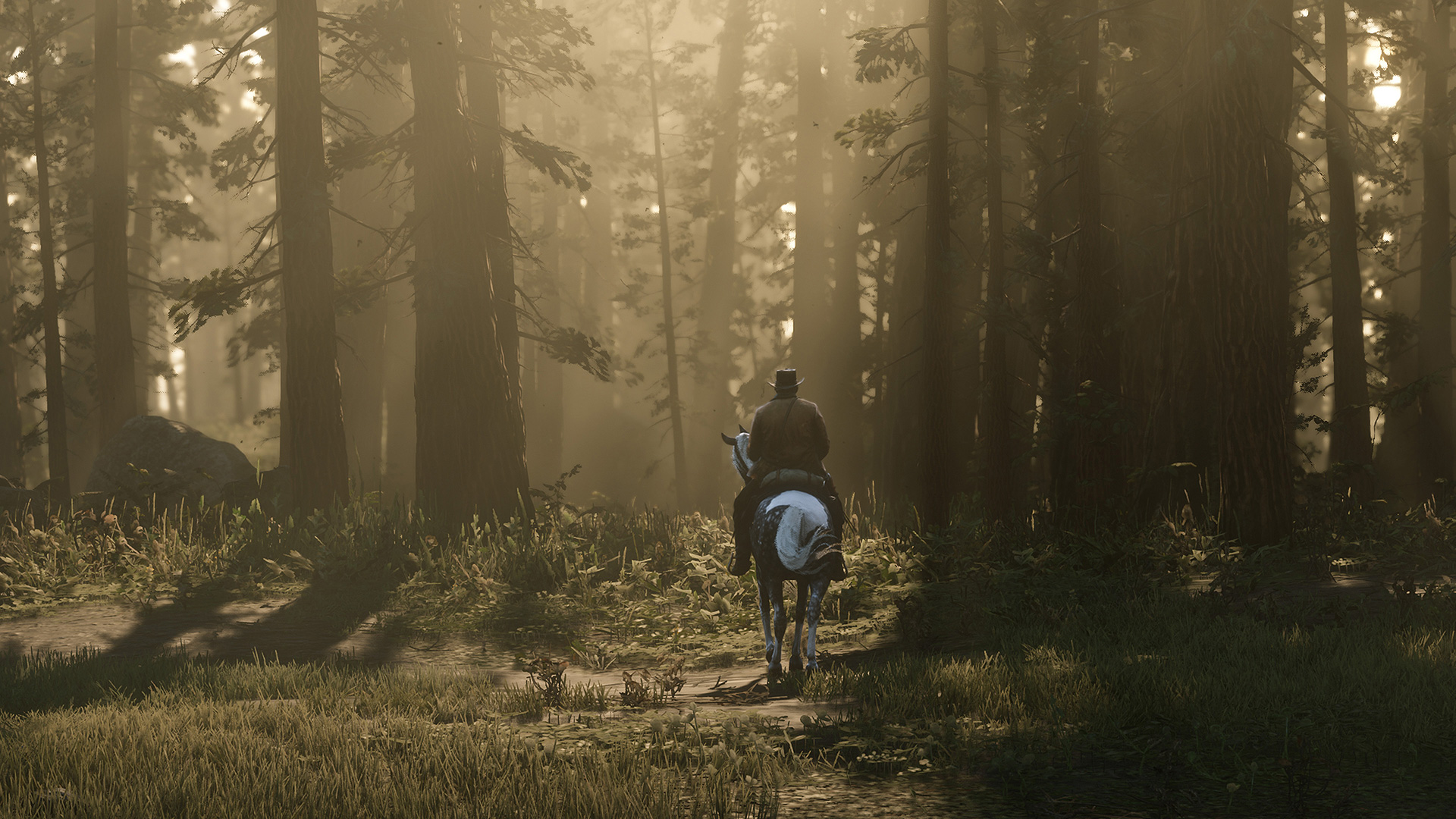 The problem, however, comes when that attention to detail gets in the way of actually playing the game. There is a long, gratuitous animation for basically every action, whether it’s opening cupboards to look for supplies or retrieving guns from your horse, and Arthur cannot do anything while the animation plays. It’s a very minor grievance that soon becomes a major problem once the game starts putting you in major battles. Arthur often eats a hail of bullets as he slowly walks towards the correct spot to perform the animation of the action you need to do because RDR2 is more interested in not breaking its sense of realism in favor of player convenience. In one major story mission for example, I needed to use a cannon to take out an enemy with a gatling gun. They were positioned on top of a tower which gave them a large height advantage and forced me to sprint from cover to cover carefully and precisely in order to reach the cannon. As soon as I arrived, I held down triangle (you must hold buttons down for a full second instead of just pressing them to interact with objects in the world), and Arthur proceeded to spasm as the AI desperately tried to move him to the right place and got stuck on a piece of geometry instead of teleporting Arthur 5 inches to the left. I died quickly, torn apart by gunfire. 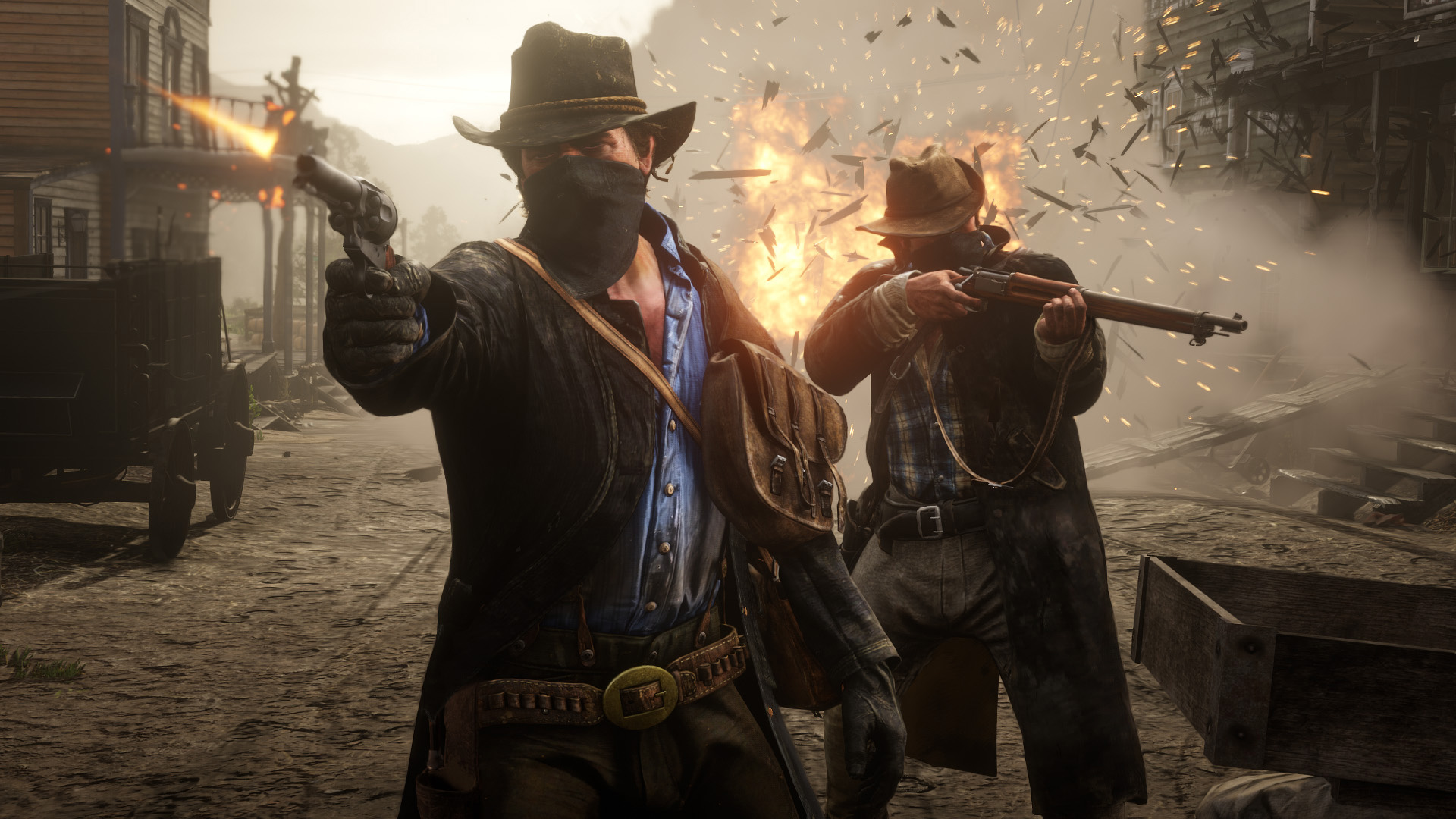 It is ridiculously frustrating because it soon becomes obvious that a lot of your time spent playing RDR2, is spent not playing RDR2. Looting the bodies of 15 enemies you put in the dirt will take you a while in most games, but RDR2’s insistence on lovingly animating Arthur going through each and every pocket makes it so that you’re either not going to bother, or take five minutes looting the area and risk being ambushed by more enemies. Items on shelves can’t just fly to me with the tap of a button, I have to hold the button down for a full second while angling Arthur to look directly at what I want to pick up, and then the animation of Arthur picking it up and stuffing it into his pocket plays.

It is the worst kind of annoyance, the one that becomes more glaring the longer you’ve played the game instead of receding into the back of your mind, and one that is unavoidable due to it being the system by which Arthur interacts with almost everything in the game. It punishes you for taking your time with RDR2, because doing anything in Arthur’s day to day life requires you to power your way through the monotony of it all. 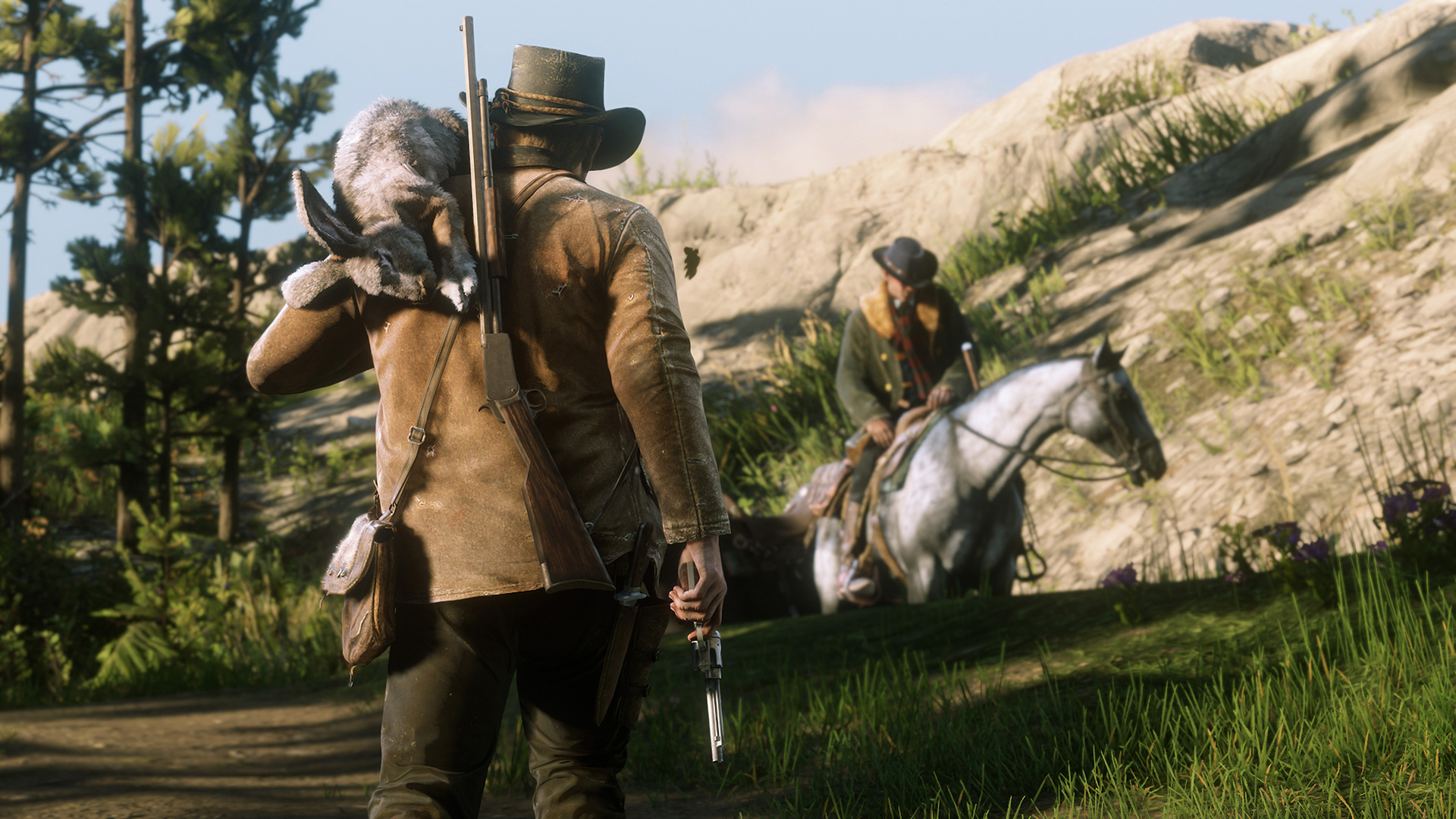 It’s a great shame because I truly loved a lot of what Rockstar did with RDR2. Unlike the first game, you spend the majority of your time with a group. The Van Der Linde gang stick together, fight together, survive together, and they make for one of the most endearing examples of a found family in video games. Arthur spends most of his story missions accompanied by at least one other gang member, and all that bonding time, to say nothing of the optional ways to bond with them in the open world, makes the story of how the gang falls apart before the events of the first Red Dead truly heartbreaking. 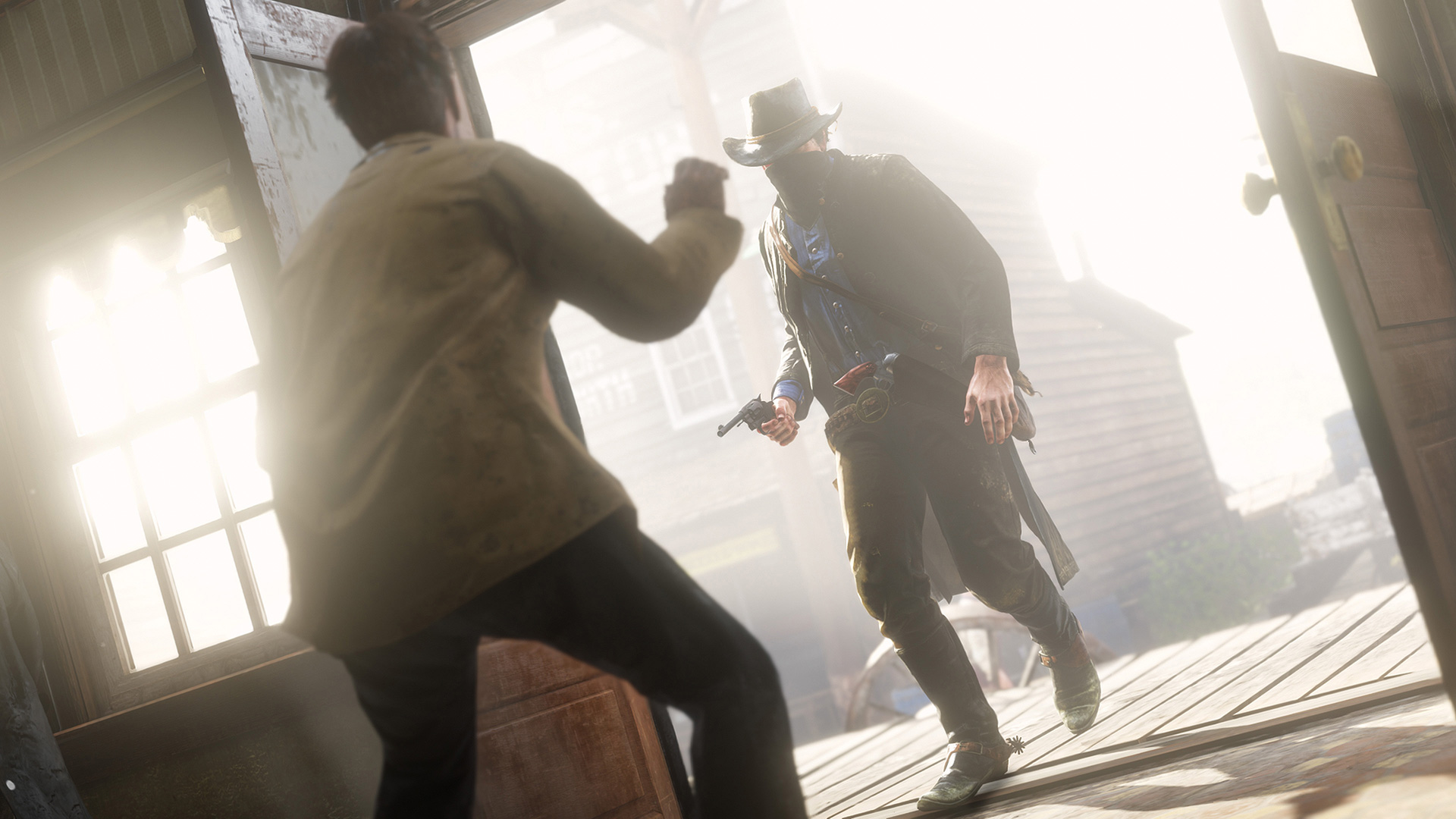 There is a powerful narrative in here about the inescapable cycle of violence and the worth of a man who fights with all he has to live as he sees fit in a world that will not let him live. There are moments where RDR2 invites you to look upon young and wild America in all its grand splendor and scarring ugliness, and does so without compromising itself with confused messages about how the violent reactions of the oppressed are just as bad actually, like what Bioshock Infinite did. There are small, beautiful character moments such as overhearing Dutch and Hosea quietly talk about how they’re going to get their family out of this mess like they always do, and sweeping action scenes that have you ride down into an oil refinery guns blazing to save your friend Eagle Flies that just take your breath away. RDR2 aimed high, and in doing so reached heights that would make the modern classics of the PS4 very proud.

Now if Rockstar wasn’t so afraid of their video game being too gamey, if they didn’t overwork their developers to terrifying lengths just to implement these realistic shrinking horse testicles which, by the way, are impossible to notice in normal gameplay, maybe we could have had a game that took you to such incredible heights without the roads in between being quite so… tedious.