NZXT has been making AIO cooling soutions for almost 10 years now and its Kraken line is one of the most recognizable in the market. One of the coolers in its current lineup is the Kraken Z63, a 280mm AIO liquid CPU cooler that comes with the company’s new LED display-equipped water block. The Z63 was initially released back in the beginning of 2020 alongside the rest of the company’s Z-3 and X-3 series coolers. While the company has since released RGB-equipped variants of these coolers, those who aren’t fans of RBG lighting can opt for the original versions instead.

The Kraken Z63 comes in the company’s signature packaging, with the white front featuring an image of the product accompanied by its name in big, bold letters as well as a short description of the product in smaller text. The rest of the packaging, which contains most of the information on the product, comes in NZXT’s signature purple. Inside the outer packaging is the typical molded carton, which holds all of the inclusions of the Kraken Z63, such as the radiator and water block assembly, fans, as well as the mounting parts, connectors, and accessories.

While the water block and tubing is wrapped in clear plastic, the radiator is protected by folded white cardboard. The copper plate of the water block is also protected by a thin piece of molded plastic to protect the pre-applied thermal paste. The rest of the inclusions come in an assortment of clear plastic bags, including a zip lock bag for the mounting parts to easily store the ones that don’t end up being used. The inclusion of the zip lock bag can be really helpful in making sure users don’t lose any of the mounting hardware. 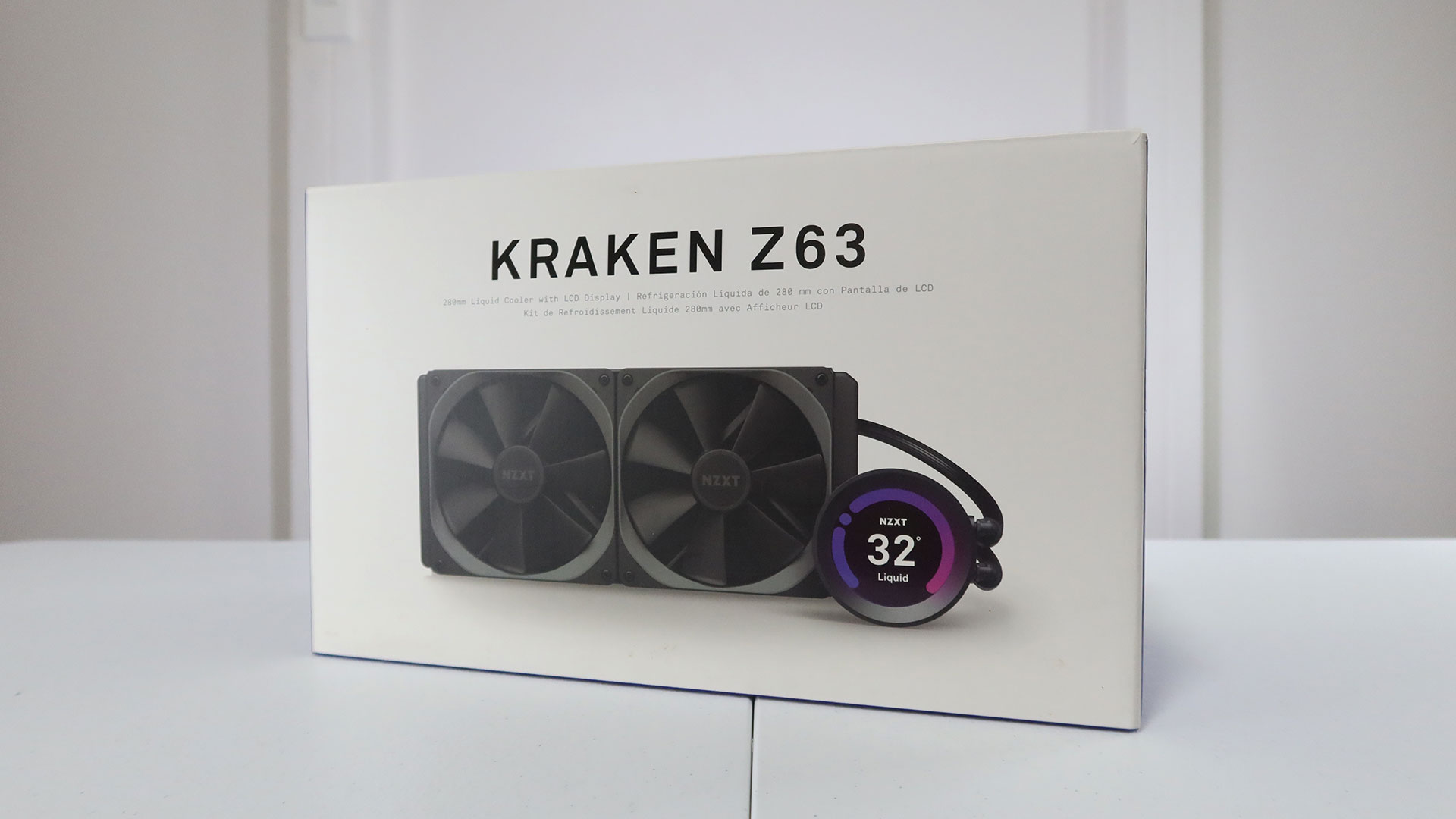 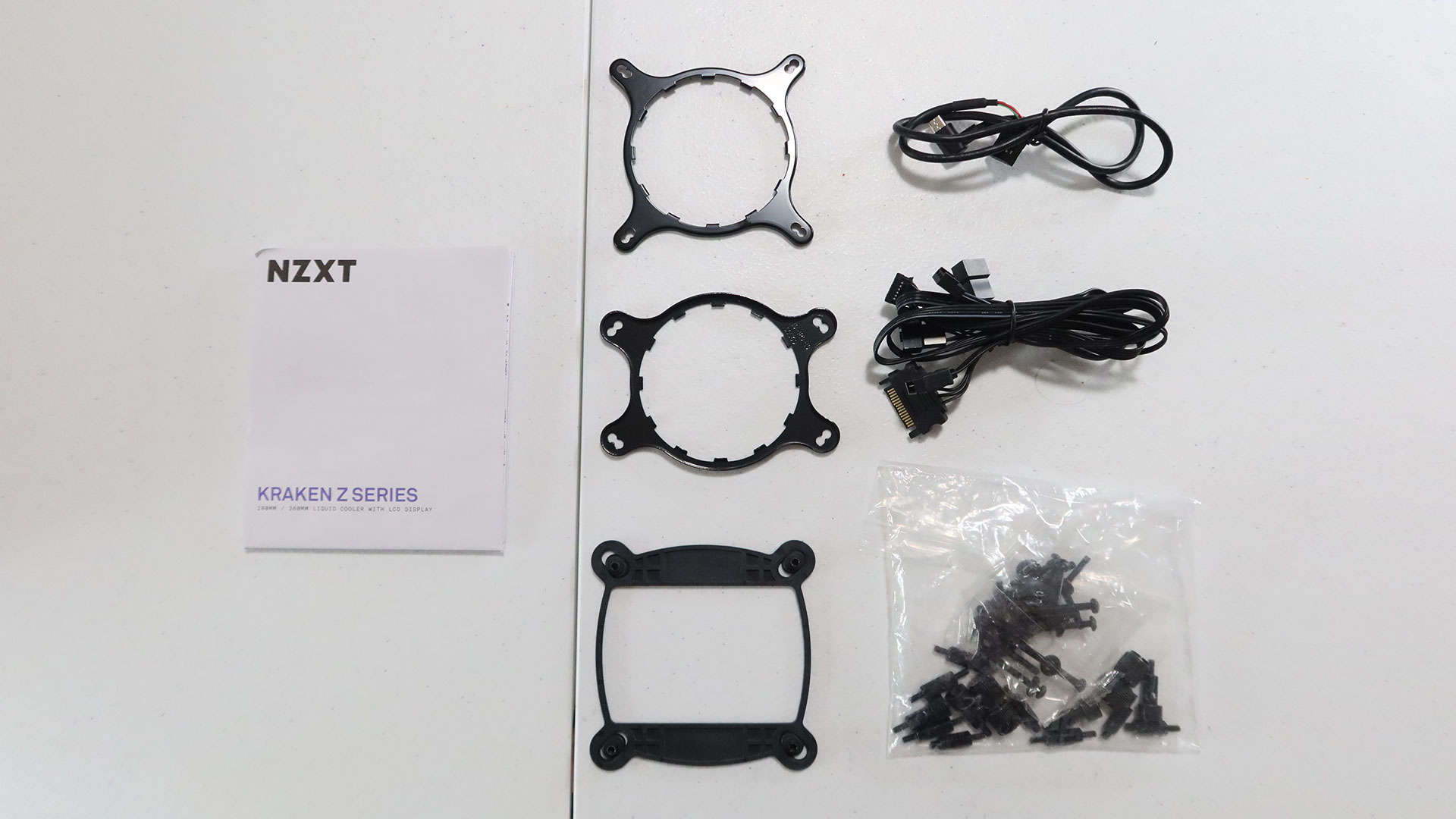 The most notable aspect of the Kraken Z63’s design is its 2.36-inch circular LCD display, which has become quite a popular feature over the past few years. The 320 x 320 resolution display can be programmed to show a number of things, including an image, GIF, or real-time information such as the CPU temperature, clock speed, and more. The quality of the display is actually pretty good in spite of its low resolution. The exterior of the rest of the cylindrical cap and water block is mostly made of plastic and comes in the company’s matte black.

The water block also features a 14-pin connector and a micro USB port for the Kraken Z63’s breakout and USB cables, respectively. The breakout cable includes a SATA connector for power, three 4-pin fan connectors, a 3-pin connector for the motherboard’s CPU fan or AIO pump header, and a proprietary NZXT RGB connector for compatible components. Under the water block is the retention bracket holder, which comes with the Intel bracket pre-installed, and the circular copper plate. 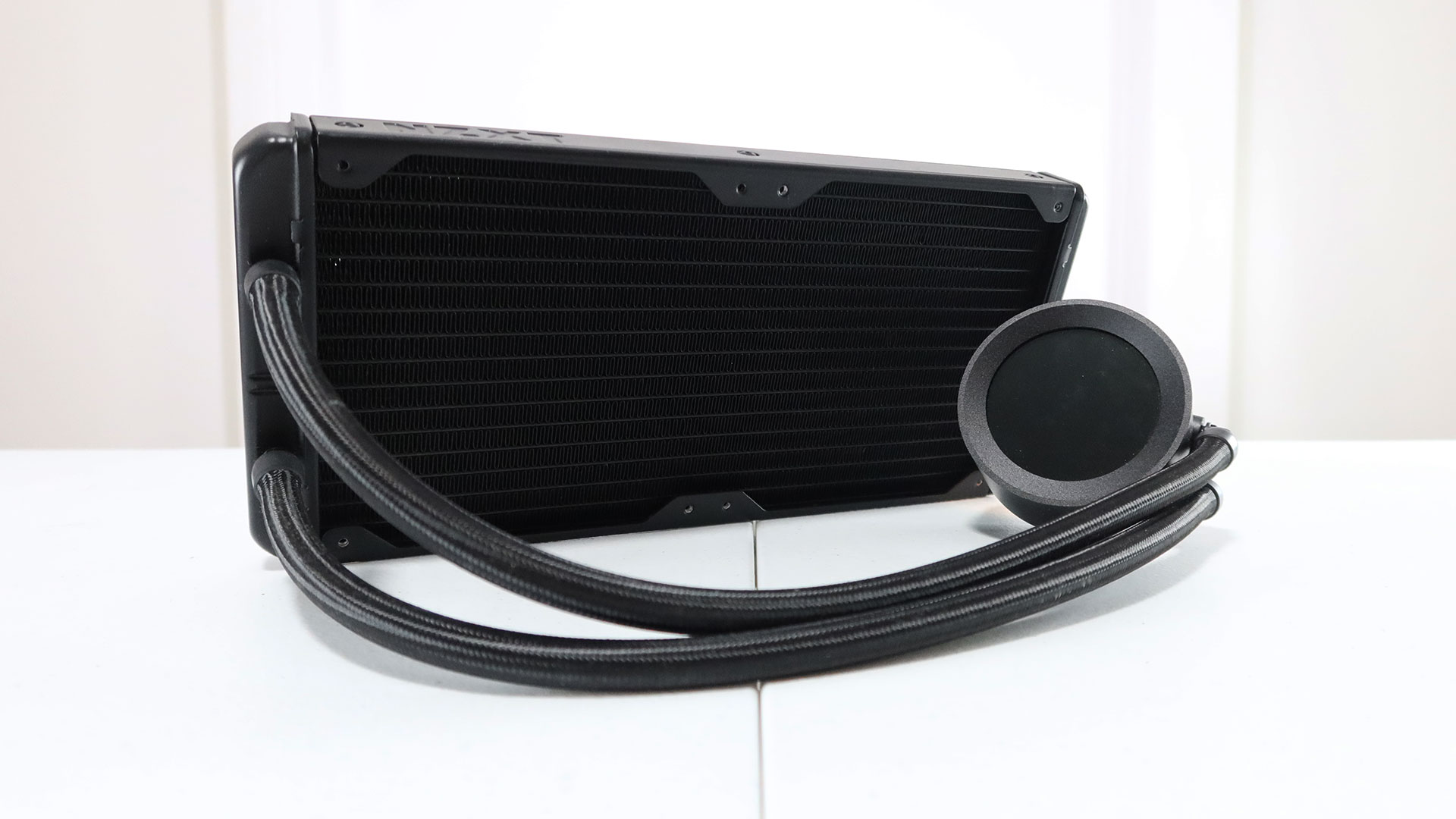 On the other end of the assembly, the radiator of the Kraken Z63 features a pretty typical design. It measures 143 x 315 x 30mm and is made from aluminum with an NZXT logo stamped on its side plates.

As for the tubing of the Kraken Z63, it’s made from rubber with braided nylon sleeving and terminates into the water block with two rotatable 90-degree fittings while it’s fixed on the radiator side, which is a pretty common design. The tubing itself, which measures around 40cm long, feels sturdy while still being flexible enough that it’s pretty easy to position the water block and radiator during installation.

NZXT has included two of its Aer P 140mm fans with its Kraken Z63, which are the company’s basic fans designed specifically for use with a radiator. The fans come in a matte black plastic with a grey trim, although different colored trims can be purchased separately. 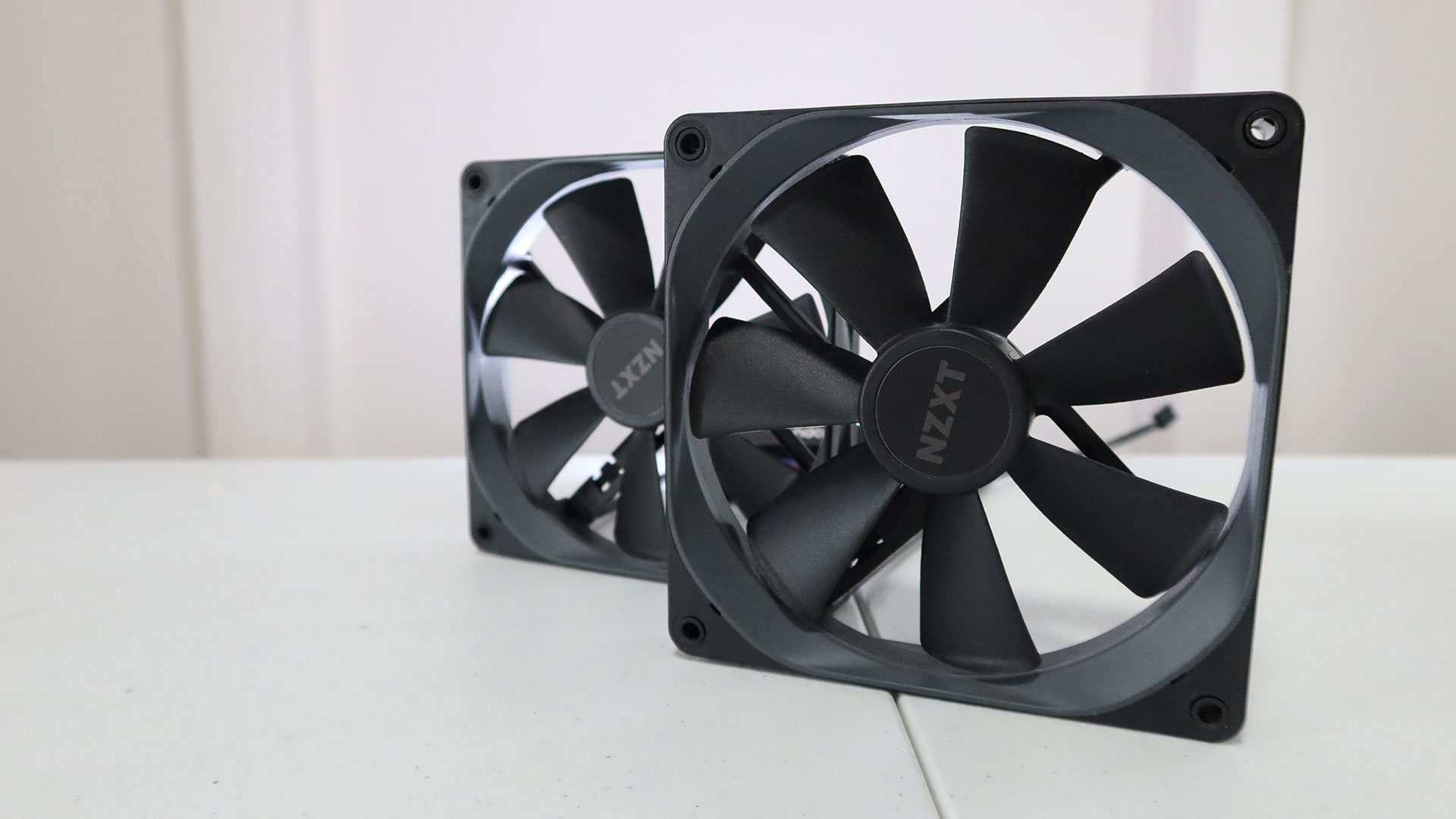 Installing the Kraken Z63 is fairly easy and straightforward, although mounting it on an Intel motherboard takes a few more steps than an AMD AM4 one. Intel users will need to replace their motherboard’s stock backplate with the Kraken Z63’s, adjust it depending on the specific socket, either Socket 1200/115X or Socket 1700, and use the appropriate standoff screws. On the other hand, AMD users can use the motherboard’s stock backplate and will only need to remove the stock bracket then install the correct standoff screws. Users will then need to install the correct retention bracket on the water block then use the four thumb screws to secure it to the installed standoffs. 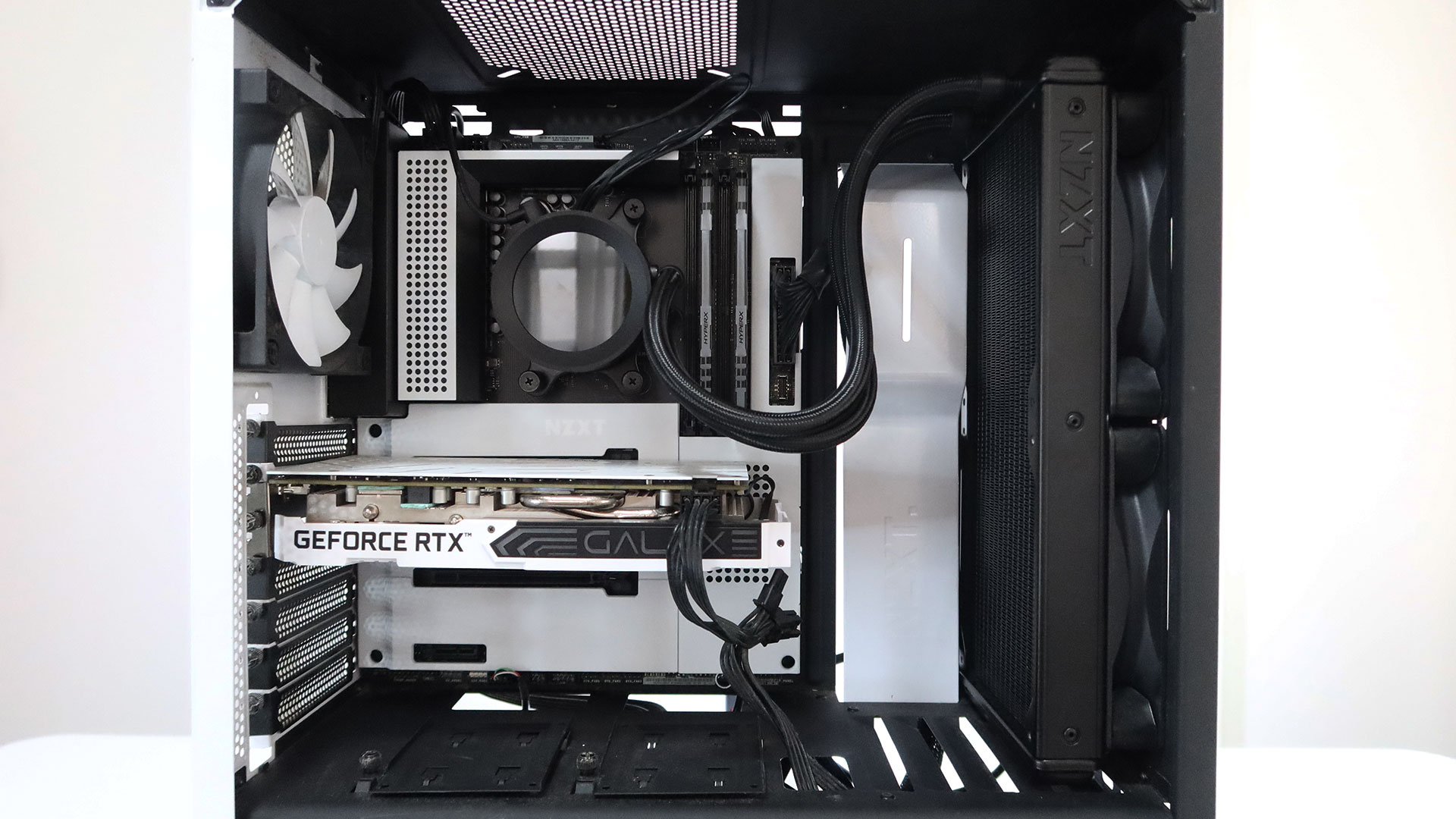 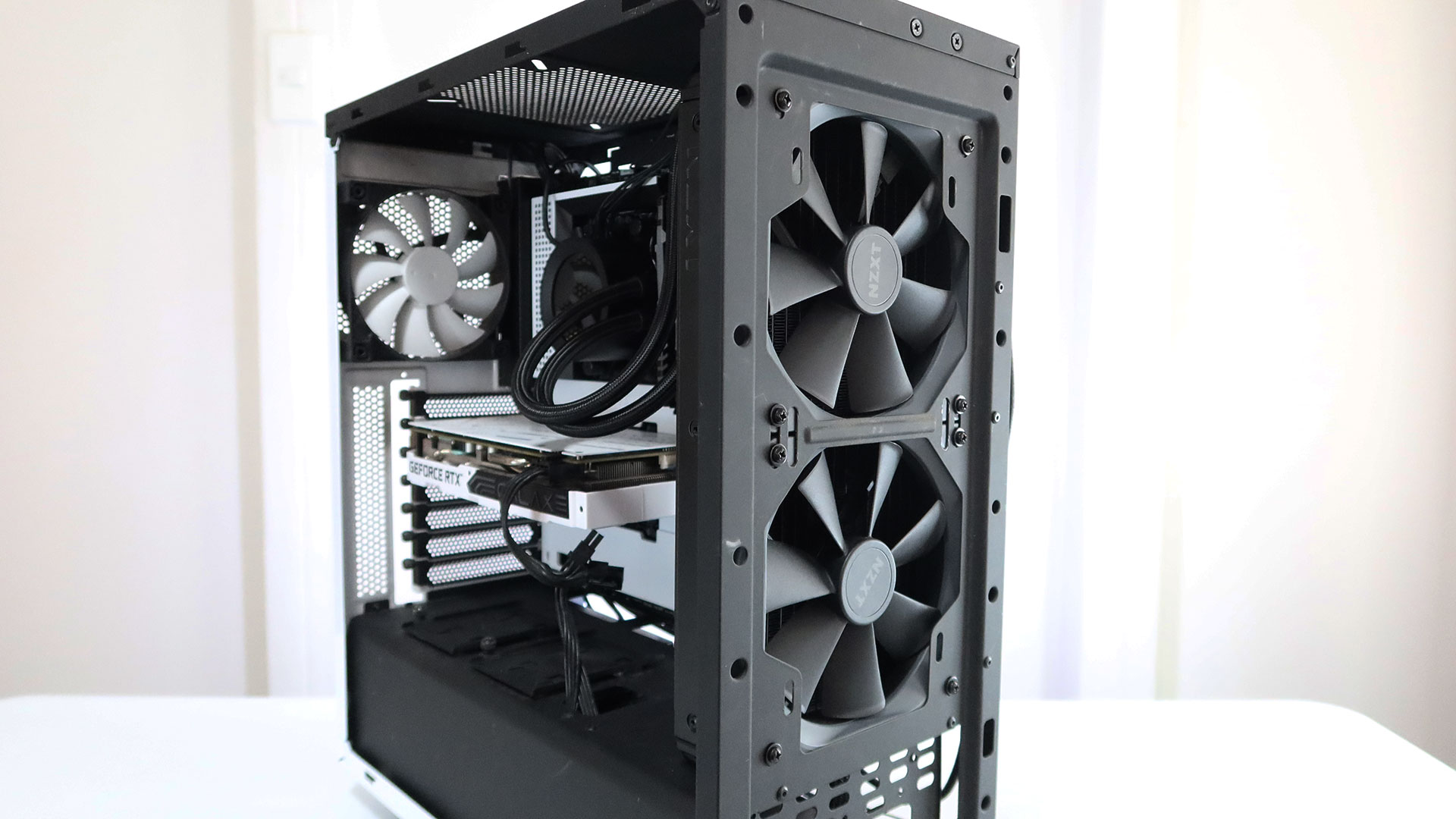 As for the radiator, NZXT has included enough hardware to let users mount it in several configurations. There are enough short and long screws to mount the Kraken Z63’s radiator and fans in either a push or pull configuration. Even a push-pull setup is possible if the user has additional fans on hand. NZXT has also included washers to mount the fans or radiator more securely and to avoid scratching either the fans, radiator, or case. After installing the water block, radiator, and fans, users will need to connect both the breakout cable and the USB 2.0 cable to the water block and attach them to their respective headers or connectors.

Notably, the cables of the NZXT are long enough that users will easily be able to route them cleanly within their case. Particularly, the USB 2.0 cable can easily reach a USB 2.0 header at the lowest part of a motherboard even when routed up and behind the motherboard tray. According to NZXT, its Aer P fans have a speed of up to 1,800 (± 300RPM), an airflow of up to 98.17 CFM, and a static pressure of up to 2.71 mm (-H2O). 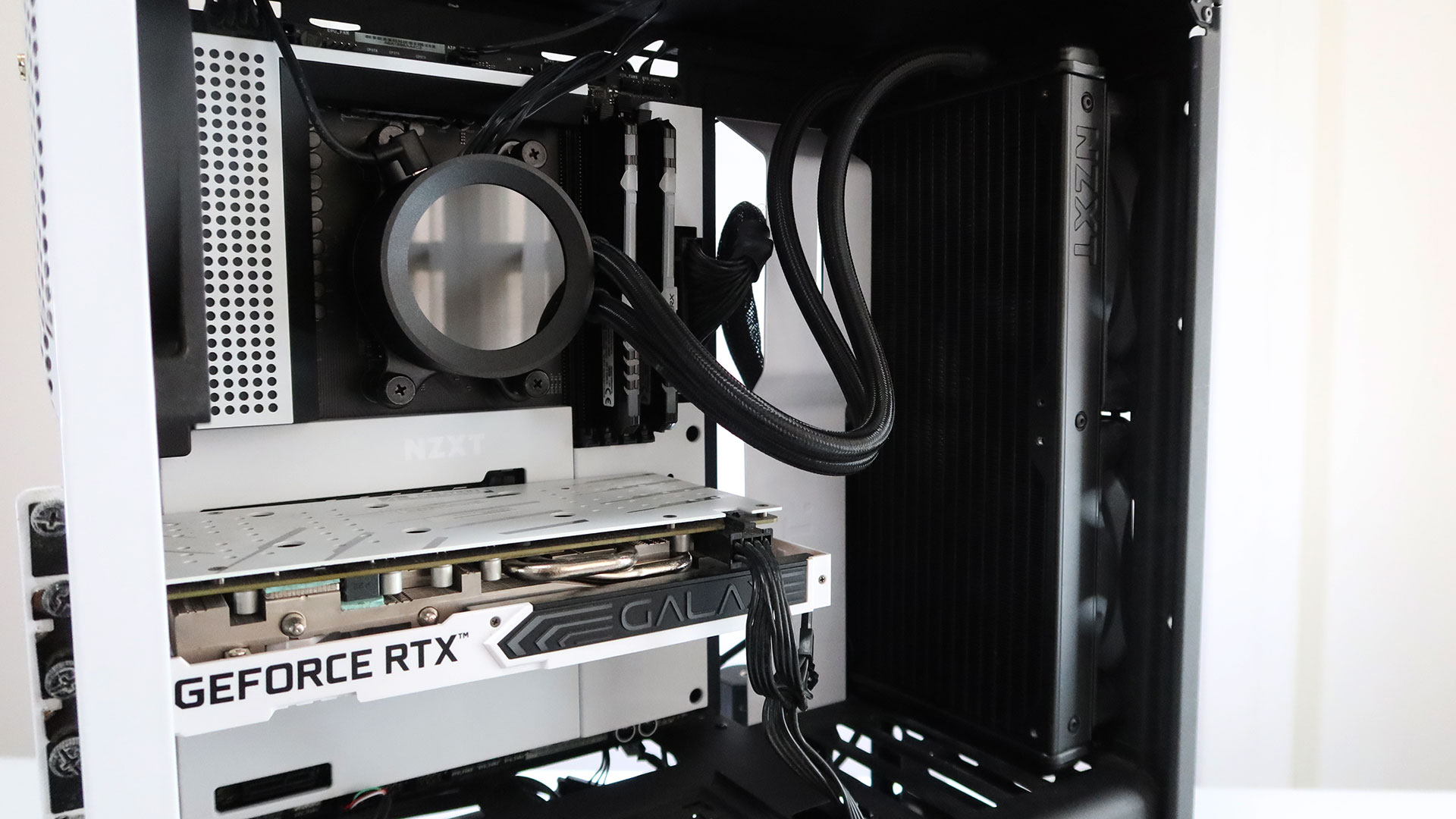 Once the Kraken Z63 is fully mounted, users can monitor and control its settings with NZXT’s CAM software. It features a very simple and clean interface, which makes it very easy to navigate and use. With the CAM software, users are able to monitor several of the PC’s components, customize the lighting of any connected and compatible RGB devices, adjust cooling profiles, manage the settings of other supported components, and more.

When the Kraken Z63 is installed, most of its settings will be located in the CAM software’s Cooling and Lighting tab. In the Cooling tab, users will be able to monitor the CPU and GPU’s temperature, the temperature of the cooling liquid, pump RPM, and fan RPM. Users will be able to set, customize, and save different cooling profiles within this tab and apply them to either all the connected components or set the profiles for each one individually.

As for the Lighting tab, users will be able to customize the Kraken Z63’s LCD display. Users can choose to display information that the Kraken Z63 sources from the CAM software, such as CPU or GPU temperature, cooling liquid temperature, CPU frequency, CPU/GPU utilization, and more. Users can also choose to display an image or animated GIF. The colors of the displayed text and visual effects can also be customized by the user. 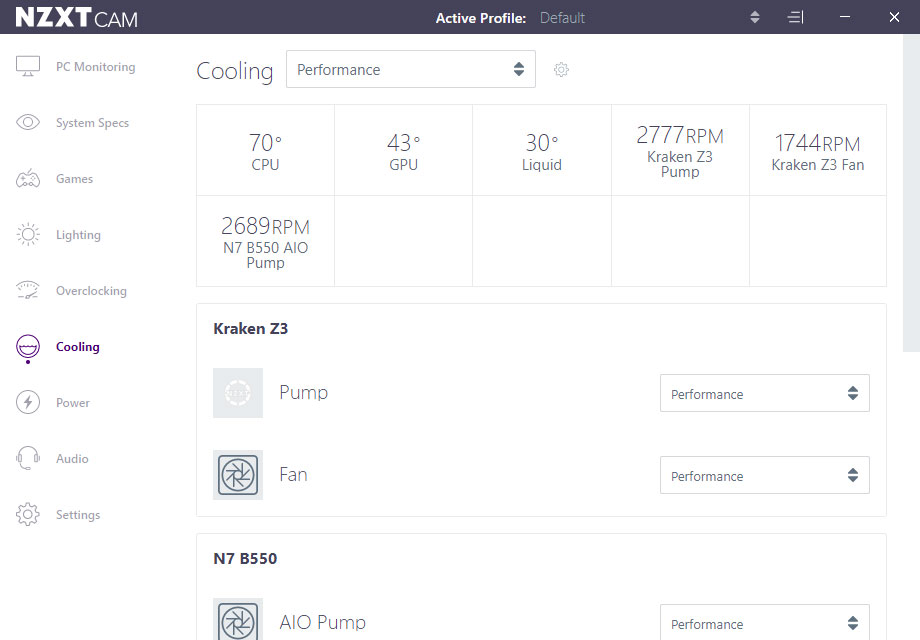 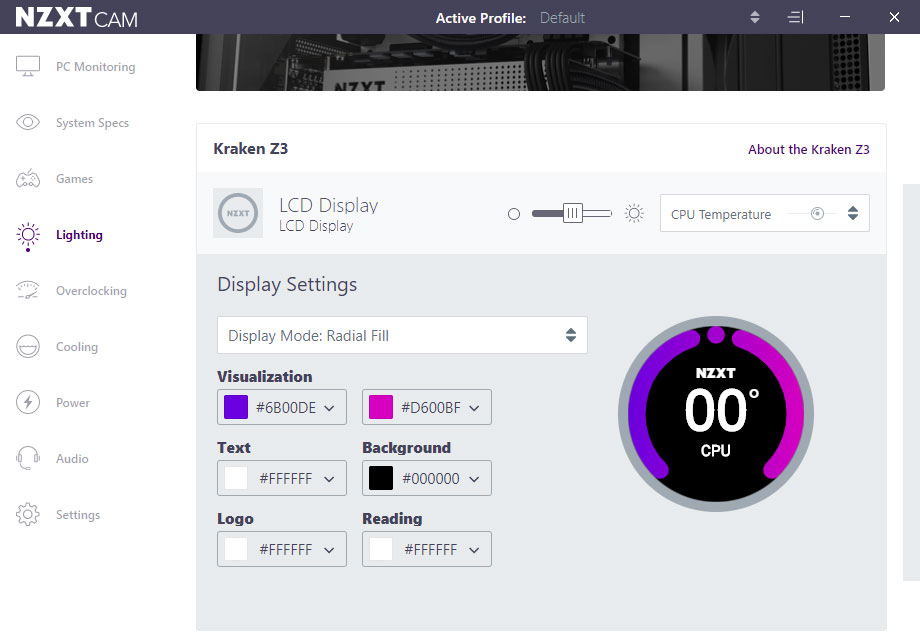 We tested the cooling performance of the Kraken Z63 both at idle and under load, achieving the latter using CPU-Z’s stress test feature.

The Kraken Z63 was able to keep the temperature of our CPU at a little below 40 degrees at idle and a max of 71 degrees under load, with an ambient temperature of 28 degrees. The performance of the Kraken Z63 is more than satisfactory, especially when compared to our previous AIO cooler, a Deepcool Gamer Storm Captain 240EX RGB, which runs almost 10 degrees hotter. 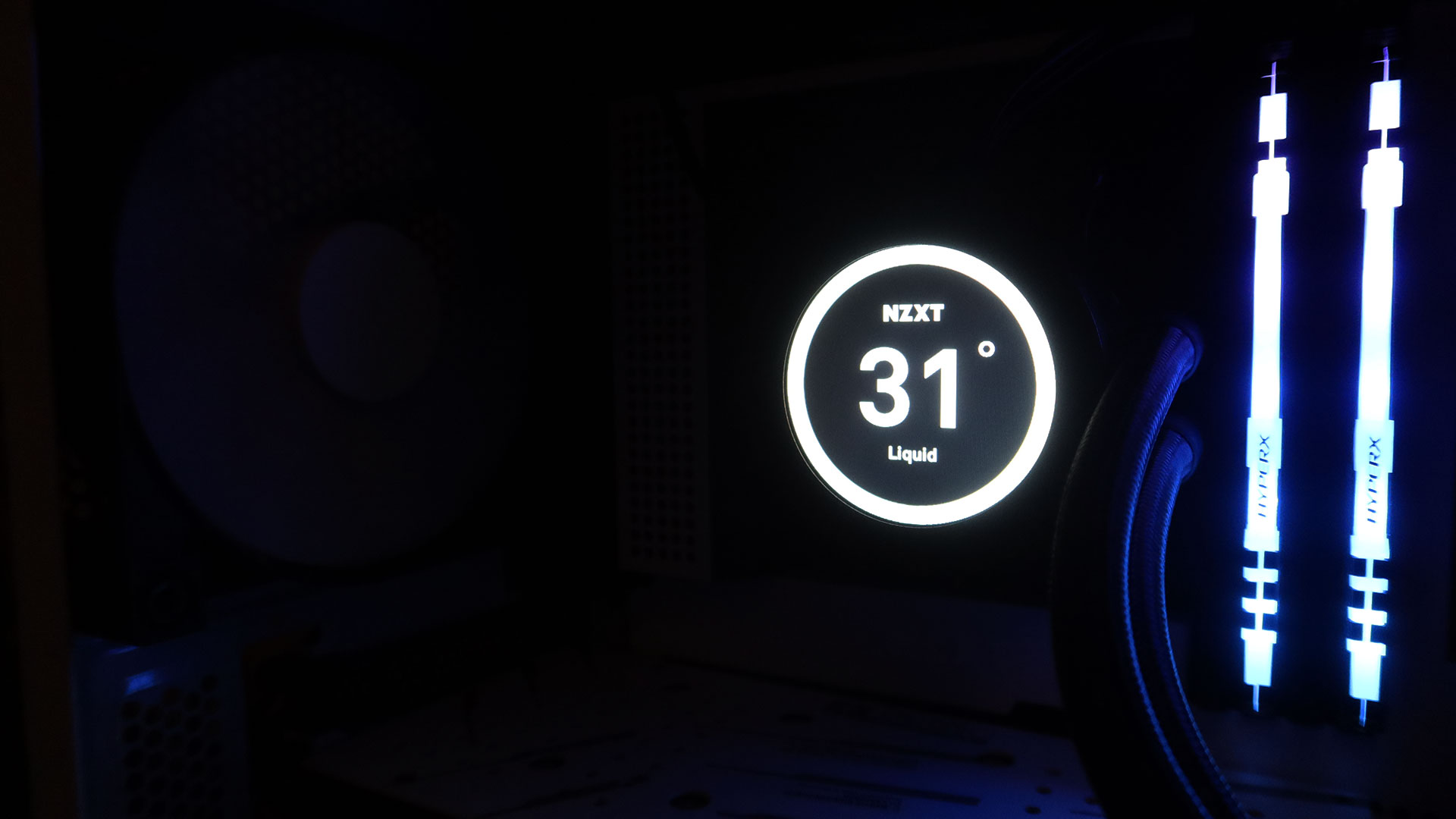 The Kraken Z63 is undoubtedly one of the best looking AIO coolers we’ve used so far, both in aesthetics as well as in build and material quality. NZXT has made installing and setting up the Kraken Z63 relatively easy because of its inclusions and CAM software. Furthermore, its great performance is in line with what can be expected from NZXT’s numerous years of experience. While the LCD display may not be for everyone and contributes greatly to its hefty price tag (of around PHP 14,000), it’s certainly a stand out feature that not only looks great but also works well. Those looking for a competent AIO liquid CPU cooler that also adds some visual flair to their build should definitely consider the NZXT Kraken Z63.