Kingston Technology has been making computer memory products since the beginning of time and it’s what the company is most known for without a doubt. The company’s HyperX line of products has also been around since the early 2000s as a way to differentiate the company’s regular memory products from its gaming and enthusiast ones. But in recent years, HyperX has started to become a brand in its own right separating itself almost completely from the Kingston name with a slew of HyperX gaming and enthusiast products released one after the other. And along with a round of eSports team sponsorships, HyperX is positioning itself as one of the industry’s premiere gaming and eSports brands.

One of the many products the company has released this year is the HyperX Cloud Pro Gamer headset. It’s a stereo gaming headset designed with real professional gamers in mind and is the company’s first foray into the gaming headset market. We’ve recently spotted the HyperX Cloud resting on the heads of both professional gamers and video game streamers around the world so, of course, we became curious about this so-called pro gaming headset and the folks at Kingston were kind enough to sate our curiosity and let us review it. We take the HyperX Cloud with us through a few in-game adventures to see if HyperX’s initial outing is strong enough to leave a mark and take the company where it wants to go.

First off, something has to be said about the HyperX Cloud’s packaging as the company definitely didn’t skimp on it at all. The box is gigantic, one of the bigger ones we’ve come across for a gaming headset. It features all that you would expect from a gaming headset box including an array of pictures, a bundle of information, and a few logos of the teams the brand is sponsoring. All of this gives the HyperX Cloud a professional and premium feel and a very good first impression. But it doesn’t end there. Inside the box of the Cloud is yet another box and this one looks to be where all the company’s budget for packaging went. 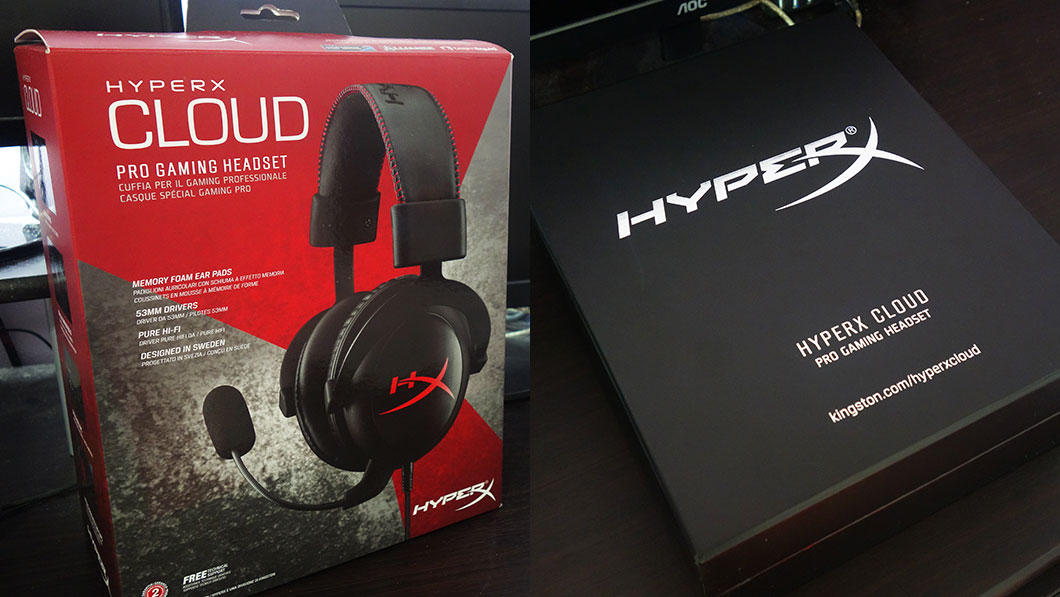 Taking the top cover off reveals the headset and some of its accessories nestled in a foam bed as well as a slide out cardboard container where the rest of the HyperX Cloud’s accessories are hidden. The HyperX Cloud comes with a large array of accessories (more than we’ve ever seen from a gaming headset). The accessories include a detachable microphone, an extension cable, a Y-splitter for use with mobile devices and some laptops, an in-line control module, a carrying bag, and an airplane adapter. The airplane adapter came as a surprise as it’s something that you usually wouldn’t expect to come with a gaming headset but since HyperX is positioning the Cloud as the headset for professional gamers (some of whom travel a lot) the adapter makes more sense to include.

The amount of care and effort HyperX has put into designing the packaging for the HyperX Cloud has definitely paid off. From the first time you see the box to the end of the whole unboxing experience, the HyperX Cloud just screams premium and that’s something you don’t regularly see with gaming headsets at this price point.

This impressive attention to detail has also made its way to the headset itself. The HyperX Cloud features a classic industrial look that is based on the Qpad QH-90, another well-known gaming headset. The design is unassuming, functional, and has a simple but sophisticated beauty to it. The HyperX Cloud’s design (and consequently the Qpad QH-90) has gone away with the flashy and unnecessary shapes and colors found in many of today’s gaming headsets and have decided to design a headset that’s just simple, functional, and professional.

The headband, made from aluminum, is covered in thick leather padding with red stitching and features a stitched black HyperX logo. The headband feels sturdy and gives you a bit more confidence to flex it when trying to put it on while the thick stitching makes it feel more resilient to wear and tear. The padding covers the whole headband and terminates into thick plastic end covers where the fork-shaped aluminum frame for the ear cups also extend from.

The ear cups are mostly made from hard soft-textured plastic and the back of each cup features a brushed aluminum plate with the HyperX logo printed on it. The left cup features the slot and port where the included microphone is attached as well as the headset’s braided cable. Additionally, due to the design of the headset, the wiring connecting the left cup to the right protrudes and extends from the ear cups to the headband. This is a pretty good design decision as the extra length of cable from the cup to the headband gives the ear cups more allowance to swing and adjust without fear of overextending the wires and wearing them down faster. 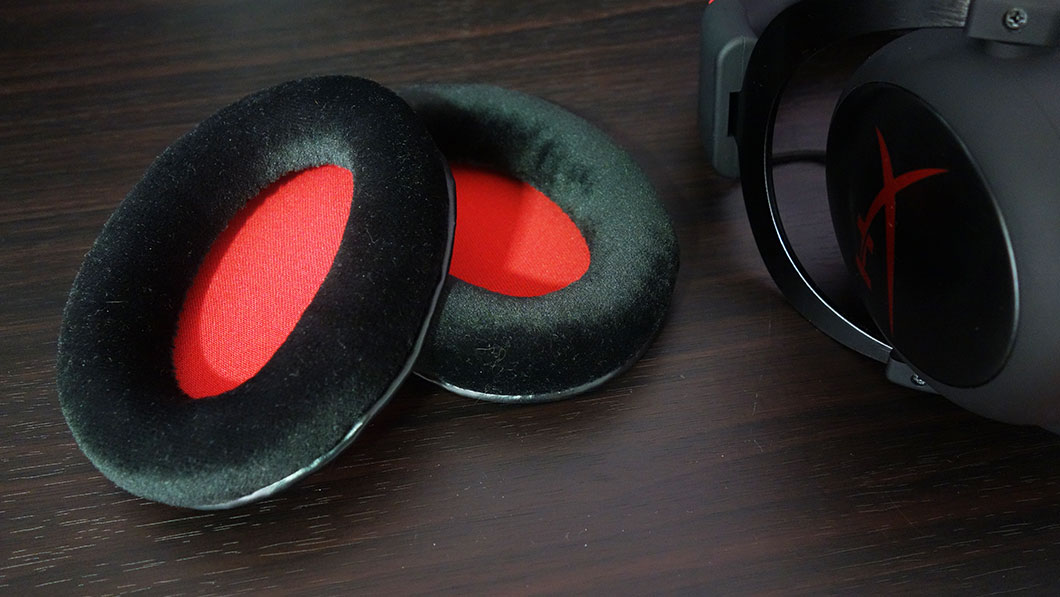 The HyperX Cloud comes with a pair of velour ear pads along with its standard faux leather ones.

The HyperX Cloud comes with two pairs of ear pads – leather and velour – which are already more than what you would usually get from a gaming headset at this price range. The leather ear pads are your typical faux leather ones albeit featuring memory foam while the velour cloth ear pads use regular foam padding.

One of few issues I had with the headset’s design is the limited adjustment of the headband which meant I couldn’t extend the cups away from the headband enough so that they covered my whole ear so those with big heads might face this same issue. Another issue is the length of the headset cable that, when you attach the included control module, becomes too long so reaching the control module becomes cumbersome and inconvenient.

The HyperX Cloud is probably one of the most comfortable headsets we’ve used. The aforementioned flexibility of the headband makes it very easy to put on or take off and in spite of my previous misgivings about their limited adjustment the ear cups are easily and quickly adjustable. The clamp force of the headset was enough to keep it stable on my head without it hurting my temples or ears while the total weight (of only 350 grams), the weight distribution (which favors the ear cups), and the headset padding made for a comfortable and balanced fit and even after long periods of use did not become fatiguing. 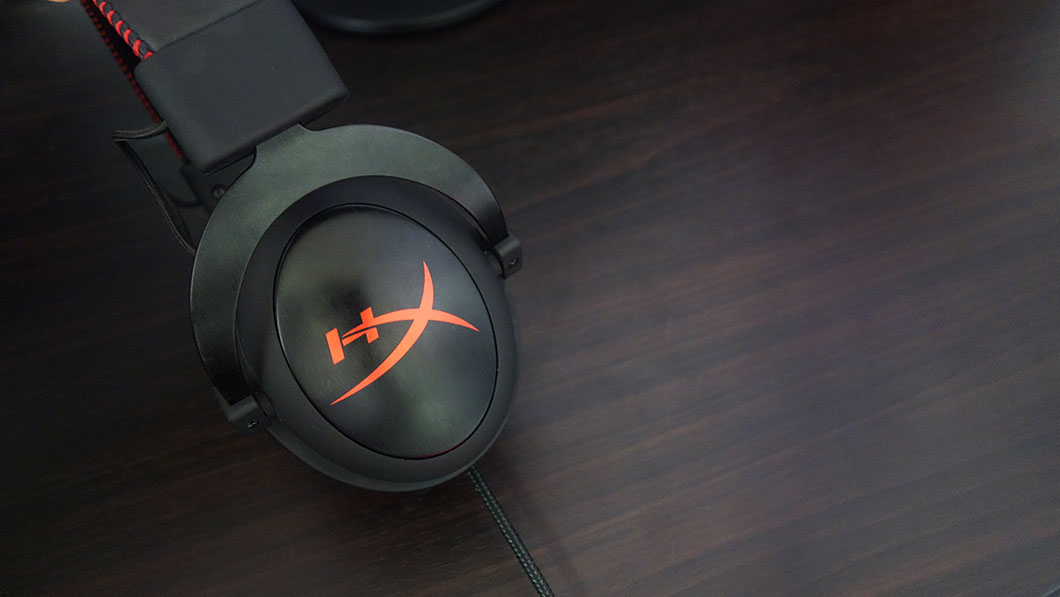 As for the two pairs of included ear pads – I found the leather ear pads hotter and less comfortable after long usage but provided better sound isolation while the velour ear pads were cooler and less fatiguing although there was some obvious sound leakage. Overall, the headset was comfortable to wear and use even for long durations (8 hours or so in my experience). It’s one of the more comfortable headsets that I’ve used especially with the velour ear pads which ended up being my preferred pair of pads.

As for sound quality and performance, the HyperX Cloud performed very well in the sound output department with its pair of 53mm drivers. The output volume was relatively high when compared to other similarly priced headsets and barely showed any signs of sound distortion when we turned up the volume.

Playing most games with the HyperX Cloud was an enjoyable experience – background noise, music, sound effects, dialogue, and other audio sounded clear and immersive. Listening to music and video with the HyperX Cloud was also a great experience and the headset actually sounds at par or even better than some of the available music headphones in its price range. The HyperX Cloud’s 53mm drivers have a warm sound signature with clear and balanced mids, aggressive highs, and just the right amount of low-end thump without becoming distorted or overpowering. 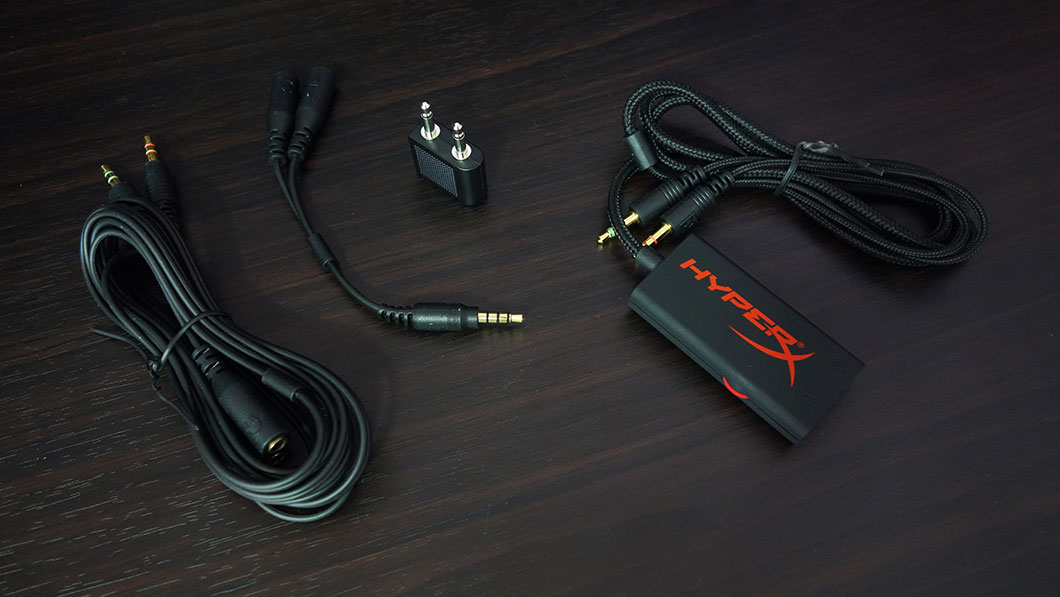 Some of the HyperX Cloud’s accessories.

One area where the HyperX Cloud struggles though is first-person shooters where the headset had difficulty separating and positioning sounds in the environment so determining where footsteps and gunshots were coming from wasn’t as easy as with other headsets we’ve tried. This also meant sound staging whilst listening to music and video was also subpar.

We were also sadly disappointed with the quality of the included detachable microphone. While voice transmission was mostly clear, there was notable distortion and static. We also ended up wanting for a bit more isolation as the microphone was prone to picking up background noise. We were expecting the HyperX Cloud’s microphone to be of the highest quality since the company is positioning this as a headset for professional gamers some of whom perform in teams where clear communication is paramount.

In spite of our issues with the HyperX Cloud’s design and performance we can definitely say that it’s one of the best, if not the best gaming headset in its price range. From packaging and design to comfort and performance, HyperX has really tried to make their mark in the gaming headset market with the HyperX Cloud. It’s a premium headset packed with almost everything you need from a headset and more. And at an SRP of around Php4,450 it undeniably has a lot of bang for its buck. HyperX has really come out of the gate in style with the HyperX Cloud and from our point of view, there’s nowhere to go for them but up.