When Diablo 3 came out 2 years ago, it garnered pretty polarizing opinions on many of its features including, among other things, the infamous Auction House, the way loot was distributed, and the party system. Since then, Blizzard has sequentially attempted to remedy the criticisms about the original game with patch after patch. This goes to show Blizzard’s willingness to change everything for the greater good of the community and with the coming of the Reaper of Souls they’re bringing some of the biggest changes the game has ever seen.

Blizzard has been known to introduce changes meant for an expansion in a pre-release patch that allows everyone access to them whether or not they purchase the expansion and they’ve done the same with Reaper of Souls by introducing, in late February, Patch 2.0.1 or more popularly known as Loot 2.0. Loot 2.0 brings the biggest changes from Reaper of Souls and is Blizzard’s biggest and probably the best attempt at giving the gaming community what they’ve always wanted – and it’s all for free. The Auction House is gone, the Paragon system has been revamped, the game’s difficulties have been changed completely, and that’s just the tip of the iceberg. 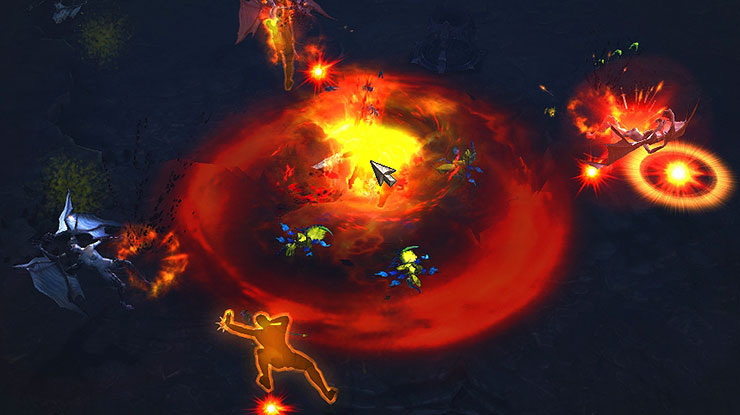 The first and probably most drastic change that Loot 2.0 has brought to the game is the complete removal of the Auction House and the consequential changes that have come with its demise. Now, players will no longer be able to buy or sell their wares for in-game or real money and trading of Legendary or Set items has been limited to players who were with you when the item dropped; with a 2-hour time limit. Otherwise, Legendary or Set items are instantly bound to your account.

With this massive change, Blizzard has also changed the rate and quality of item drops in the game; Magic, Rare, Legendary, or Set items will now drop less frequently but the ones that do drop will now roll better stats. To supplement this change, Blizzard has also implemented the Smart Drop system which will give loot an extremely high chance of rolling stats that are specifically suited for the character that found them – base stats like Dexterity and Strength or class-specific skill bonuses. This means you will most probably never find a Fist weapon with Intelligence if you’re playing your Monk.

These changes lead to a more rewarding experience that feels more progressive than grindy. I was constantly finding better items (including a few Legendaries) for my Monk and by the end of Act Five I was doing at least 100% more damage than I was when I started. 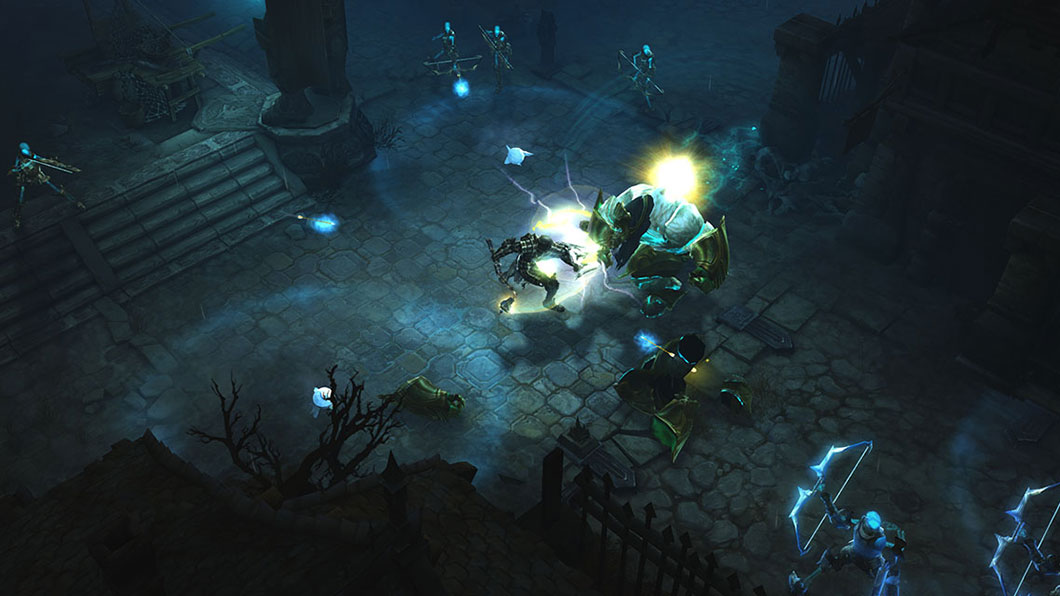 Another major change that came with Loot 2.0 and Reaper of Souls is the completely revamped Paragon system. The Paragon level cap has been removed and your Paragon level is now shared across all your characters – all your Paragon levels have been totaled and recalculated into your new single account-wide Paragon level. The static bonuses have been replaced with Paragon points that you can spend for stat bonuses in four different categories – Core, Offense, Defense, and Utility. While the ensuing bonuses feel minor with a Level 70 character, starting and leveling new characters become easier with the new Paragon and difficulty systems.

The new difficulty system takes the old Normal, Nightmare, Hell, and Inferno difficulties and replaces them with Normal, Hard, Expert, Master, and six levels of Torment with each harder difficulty giving bonuses to experience and gold drops. Additionally, difficulty is now dynamic and will scale with your character’s level. Combined with new Paragon system, it enables players to start new characters in one of the higher difficulties for faster leveling as was the case when I started out my Crusader, the new class introduced with Reaper of Souls. 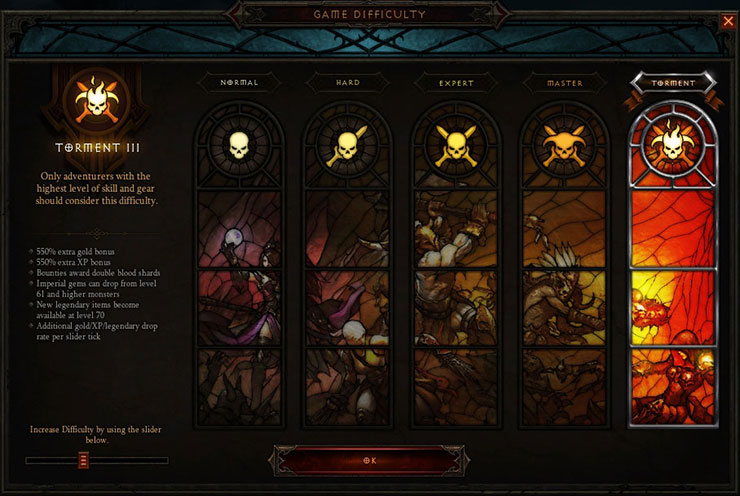 The Crusader fills the super tank role that was missing from the original game’s roster of champions. Equipped with an array of abilities that either boost the Crusader’s defenses or deal huge amounts of damage, Diablo 3’s new class is able to take a lot of punishment as well as dish it out mighty handily. I could easily stand still and face tank most of what was thrown at me while waiting for my Crusader’s long-cooldown-high-burst-damage abilities to refresh and spamming my other abilities, all of which were extremely flashy. All other classes have also received new abilities with the new expansion and the new level cap of 70 all of which have a common theme – doing as much damage as possible. At the moment, the Crusader has become my favorite class in Diablo 3 with her (or his) flashy abilities and shiny armor – the armor courtesy of the new Artisan, the Mystic.

The Mystic allows players to transmogrify the appearance of any piece of gear into another item (of the same type) as long as you’ve picked it up before – for a price. The change is purely aesthetic but this simple feature will keep players hunting through the dungeons of Diablo 3 looking for that specific design that’ll complete their look. The second function of the Mystic, and the one that isn’t just for looks, is the ability to enchant an item to re-roll one of its attributes at the cost of rare materials. Enchanting enables players to turn a good piece of gear into a great piece of gear, which you’ll experiencing a lot whilst traversing through Act Five and Adventure Mode.

The new chapter in Diablo 3’s story pits the Nephalem against the expansion’s main bad guy – Malthael, the ex-Angel of Wisdom and the now self-proclaimed Angel of Death. The story takes place in Westmarch and Pandemonium and sends the player off in a quest to stop Malthael’s plan to permanently end the war of souls. Without spoiling anything, Act Five is probably the best chapter in Diablo 3 – the locations are beautifully made (as always) and the story has a good amount of backstory mixed in which makes for a wholly interesting adventure. The only thing I wanted after completing Act Five is more of it. 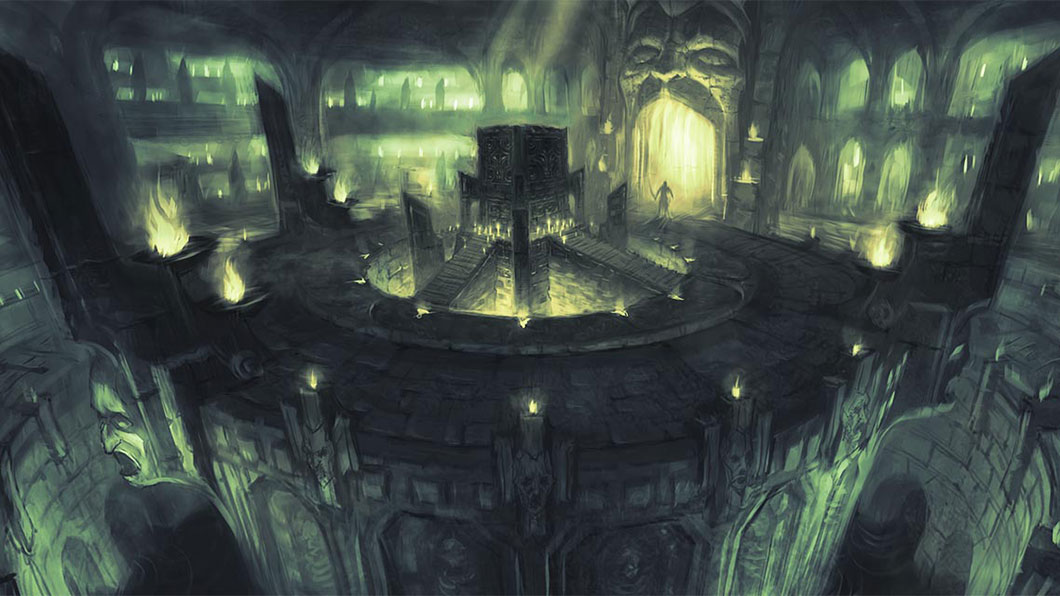 Finishing Act Five unlocks Adventure Mode where most and probably the rest of your time with Reaper of Souls will be spent in. With Adventure Mode, Blizzard has transformed Diablo 3’s end-game by giving boss and mission runs some structure with Bounties – objective-based boss and dungeon missions that reward you with tokens for random gear and tokens to enter Nephalem Rifts, special dungeons filled with a randomized number of levels and monster which are now the best places to farm legendaries.

Bounties and Nephalem Rifts have made Diablo 3 an even greater multiplayer game especially with the new Communities and Clans features introduced with Loot 2.0 that allow like-minded players to easily group up and start running through the game’s new end-game together.

Reaper of Souls (and Loot 2.0) should’ve been the game Blizzard released two years ago. The expansion and the changes it brought redeemed and rejuvenated the game and is a testament to Blizzard’s relentless pursuit to make their games better. The game now feels more solid with its better progression curve and its infinitely enjoyable end-game all contributing to a more gratifying experience for both new and old players alike. The patience and persistence of those who have stuck with the game since the original launched 2 years ago has been rewarded and those thinking of returning to Sanctuary will find a much better world where they might actually want to stay awhile.