Devil May Cry 5 Review – The Most Stylish of Comebacks

It’s well made, is what I’m saying. 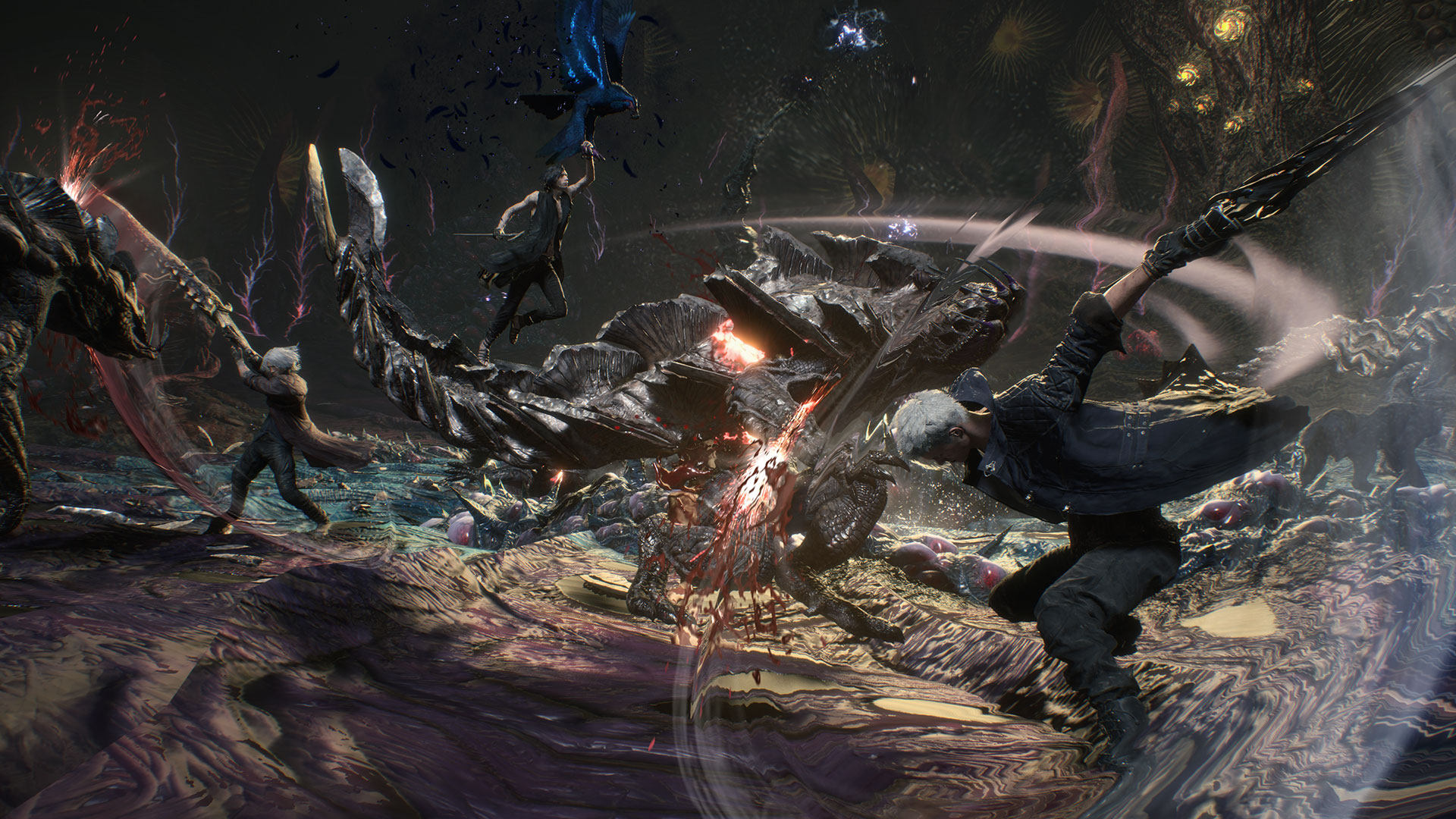 From the title screen featuring a callback to the old Capcom jingle to the brand new addition of a training room, DMC 5 does its damnedest to deliver one impression: This is a return to the good old days, except it’s going to be even better. A bold statement coming from a series we last saw in 2008 (we do NOT talk about the other one), when single player action games were still all the rage and the idea of “games as a service” had yet to really take hold beyond MMOs. The landscape has changed greatly in the 11 years Dante’s been gone. Nowadays if its not some multiplayer battle royale, the market expects some sweeping epic with a giant sandbox that pushes the boundaries of video game narratives and takes a minimum of 60 hours to complete, with a one year roadmap of new content and a constant stream of weekly challenges to keep players engaged.

So of course, Dante being Dante, his return is a 16-hour adventure with a flimsy cardboard cutout of a story meant to throw him, Nero, and newcomer V into as many infernal situations as possible and look stylish as hell on their way out. There’s no massive open world, no weekly event system, no giant checklist of collectibles, nothing to keep you engaged beyond a promise of a combat system that offers extreme difficulty and unrivaled depth, should you be willing to put in the work to learn it.

Having the main hook of your game be the promise of fulfillment upon its mastery is quite a bold move in this day and age, but the game pulls it off with flair. Learning how Nero, Dante, and V work feels great, and while V may feel a little janky, playing as Nero and Dante is a consistently amazing experience. 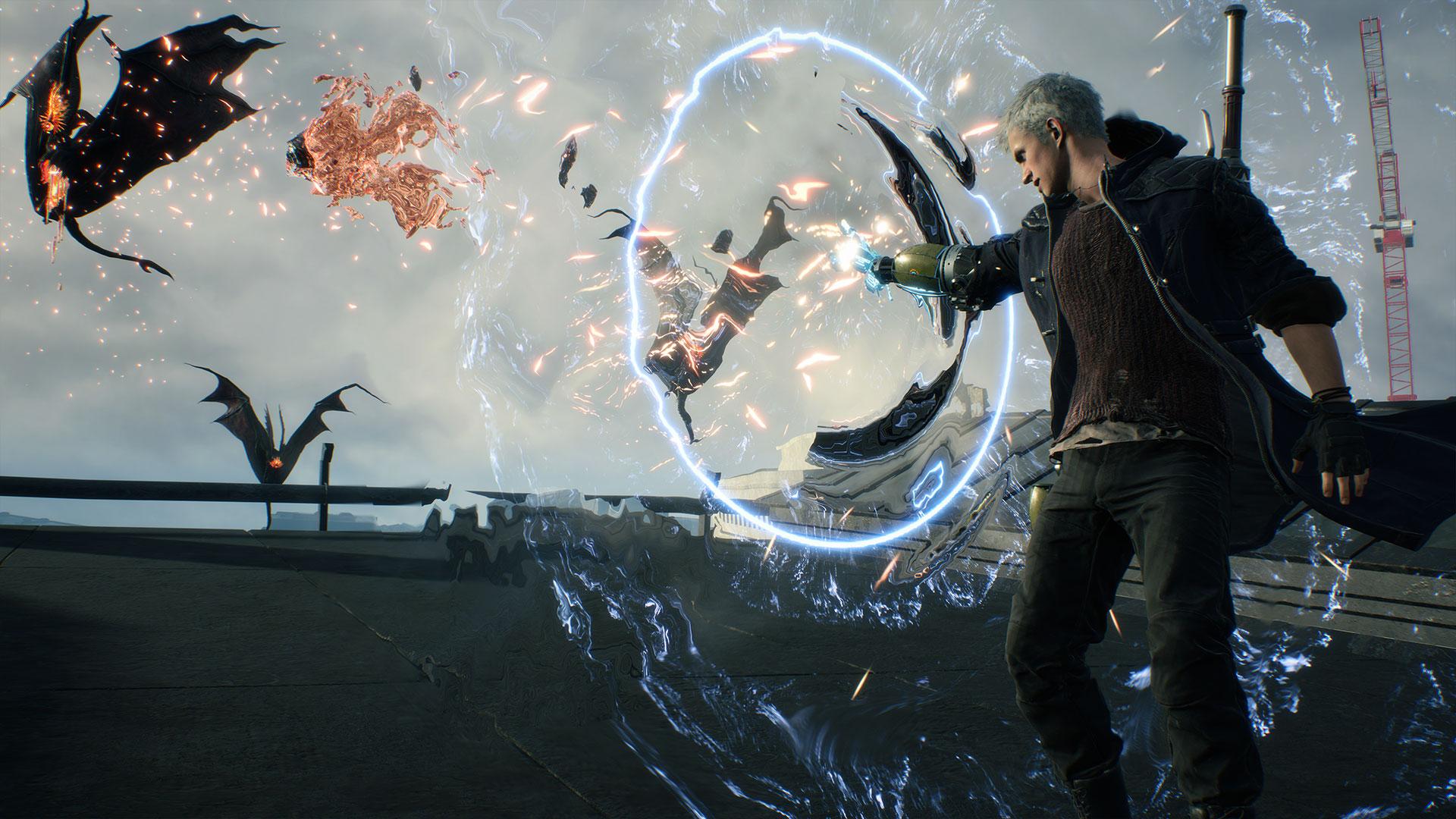 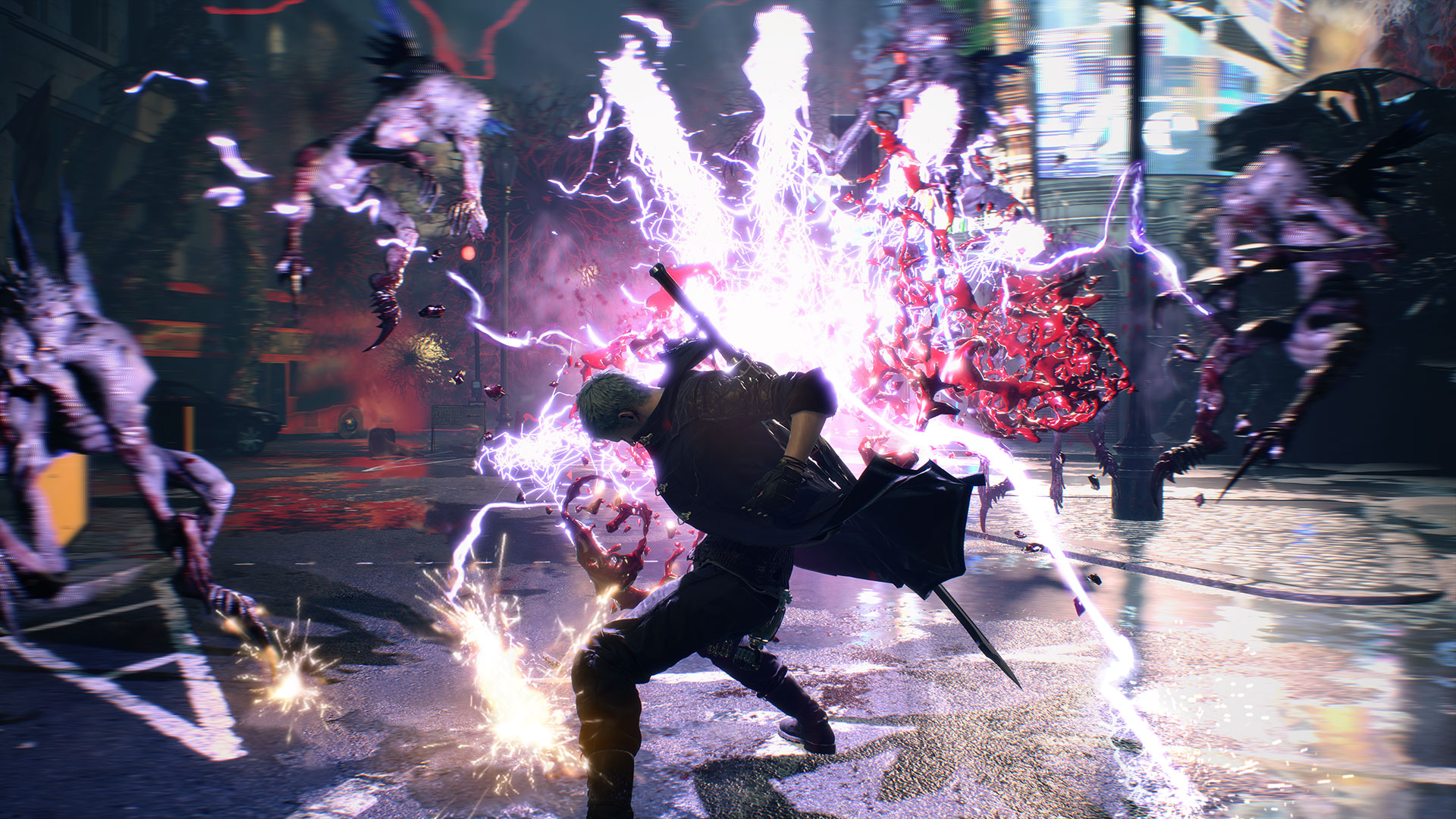 Nero for example, starts out rather basic. He’s got one sword, one gun, one arm, and a bone to pick with the Demon King, Urizen, who ripped out his other arm. After his humiliating defeat at Urizen’s hands however, Nero comes back a month later with a gimmick for the ages: He’s not just got a new arm, he’s gotten a whole RV full of mechanical limbs he means to shove up a devil’s bottom.

These arms, Devil Breakers, are what set Nero apart from Dante, finally making him more than just a blue, inexperienced Devil Hunter. Each one features several abilities, including powerful ones that overload the arm and break it after use. The Gerbera, for example, fires a shockwave on the ground that reflects projectiles, but in the air it can be used to propel Nero forward and tackle opponents for a longer lasting air combo. The Tomboy on the other hand, prevents Nero from locking on to enemies but overloads his gun and sword to the point where they grow minds of their on and poor Nero must hang on for dear life. In an emergency, Nero can even purposely break his arms in order to escape from a host of bad situations.

The disposable nature of the Devil Breakers keep Nero’s playstyle from becoming tiring, as each new arm vastly changes how he approaches combat. You’re often left making do with whatever limbs you can find in the environment and questioning yourself whether a certain fight is worth sacrificing your current arm for. That’s not even talking about the Exceed system, wherein Nero revs up his sword like it’s got a motorcycle engine attached and gains extra damage and amped up skills, or a certain other, very familiar set of abilities you don’t get until after you finish the game. 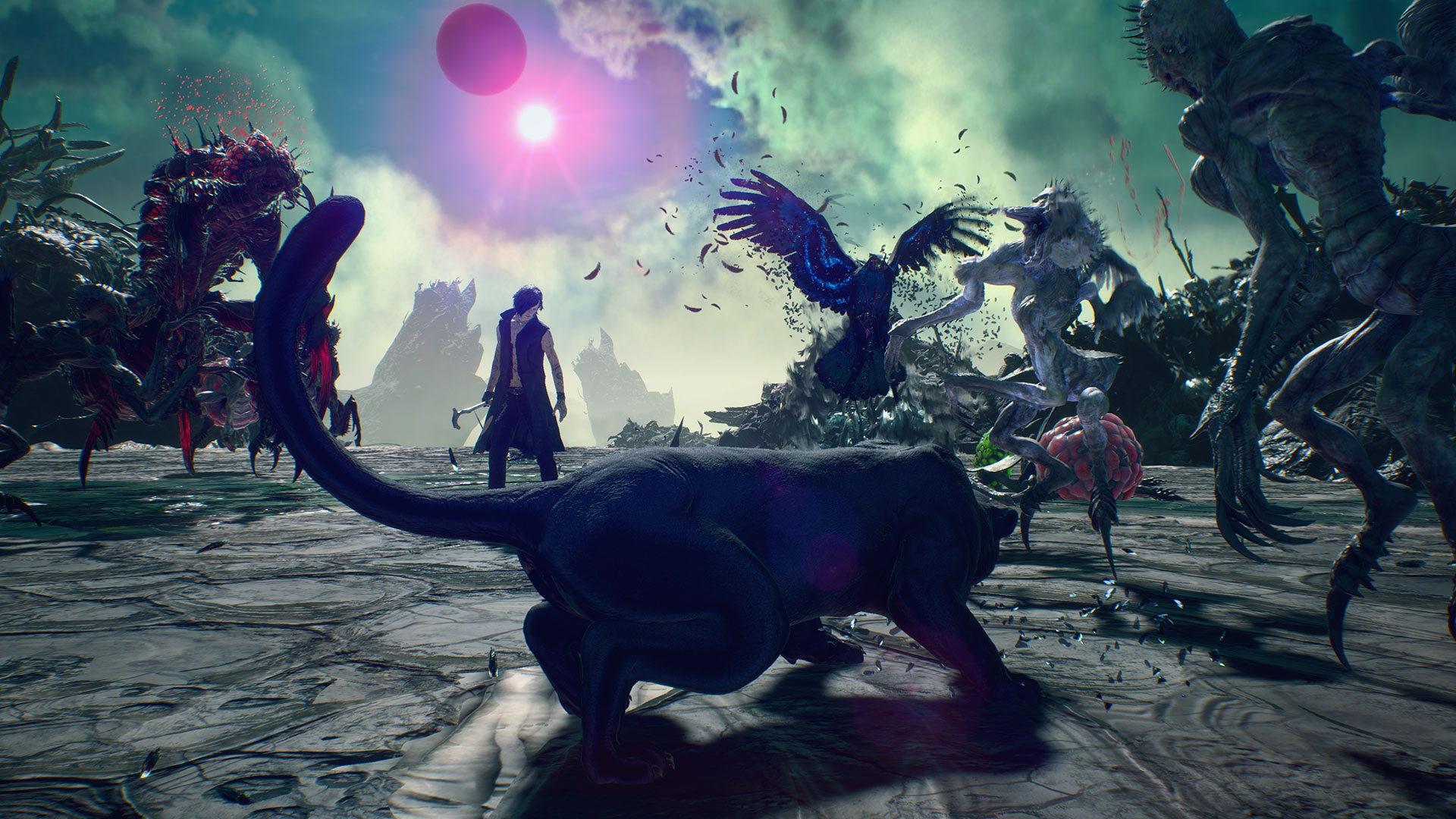 On the other hand, there’s V. The poetry loving Adam Driver-lookalike can’t actually fight much. Instead, he summons his animal friends Griffon (who does his best impression of Aladdin’s Iago) and Shadow, as well as a massive hulking beast called Nightmare. Shadow, Griffon, and Nightmare are controlled by the melee, ranged, and Devil Trigger buttons respectively, and you’re meant to have them beat up the demon hordes as V prances around to avoid enemy damage. Since there’s some weird rule that states that his pets can’t kill demons, V himself always has to make the last hit. This leads to a rather amusing rhythm of seeing Griffon and Shadow fight for their lives against the demonic hordes, only for V to strut on by and deliver a single whack unto their enemies with his cane.

To tell you the truth, fighting as V can feel a little bit awkward. There’s no real way to instantly teleport Shadow to your side, so you can have Shadow be whaling on an Empusa and spy a Hell Cainta sneaking up on you, but tapping on the melee button while facing it will only have Shadow continue to beat on the poor worker ant for a bit.  Shadow and Griffon are also necessary to perform evasive moves, with V riding Shadow to dodge left or right and Griffon pulling V away to do a backwards dodge. This means that if the two are otherwise occupied or are currently taking a dirt nap because you weren’t paying attention to their health bars, V will go down very, very quickly. To remedy this, Nightmare is big, powerful, and fully autonomous, coming down from the sky to blow everything to pieces for the simple asking price of some Devil Trigger gauge. A gauge that, by the way, you can refill by reading some good old William Blake poetry during battle. It all takes some getting used to and it’s definitely not for everyone (it certainly wasn’t for me) but V does stand on his own competently. 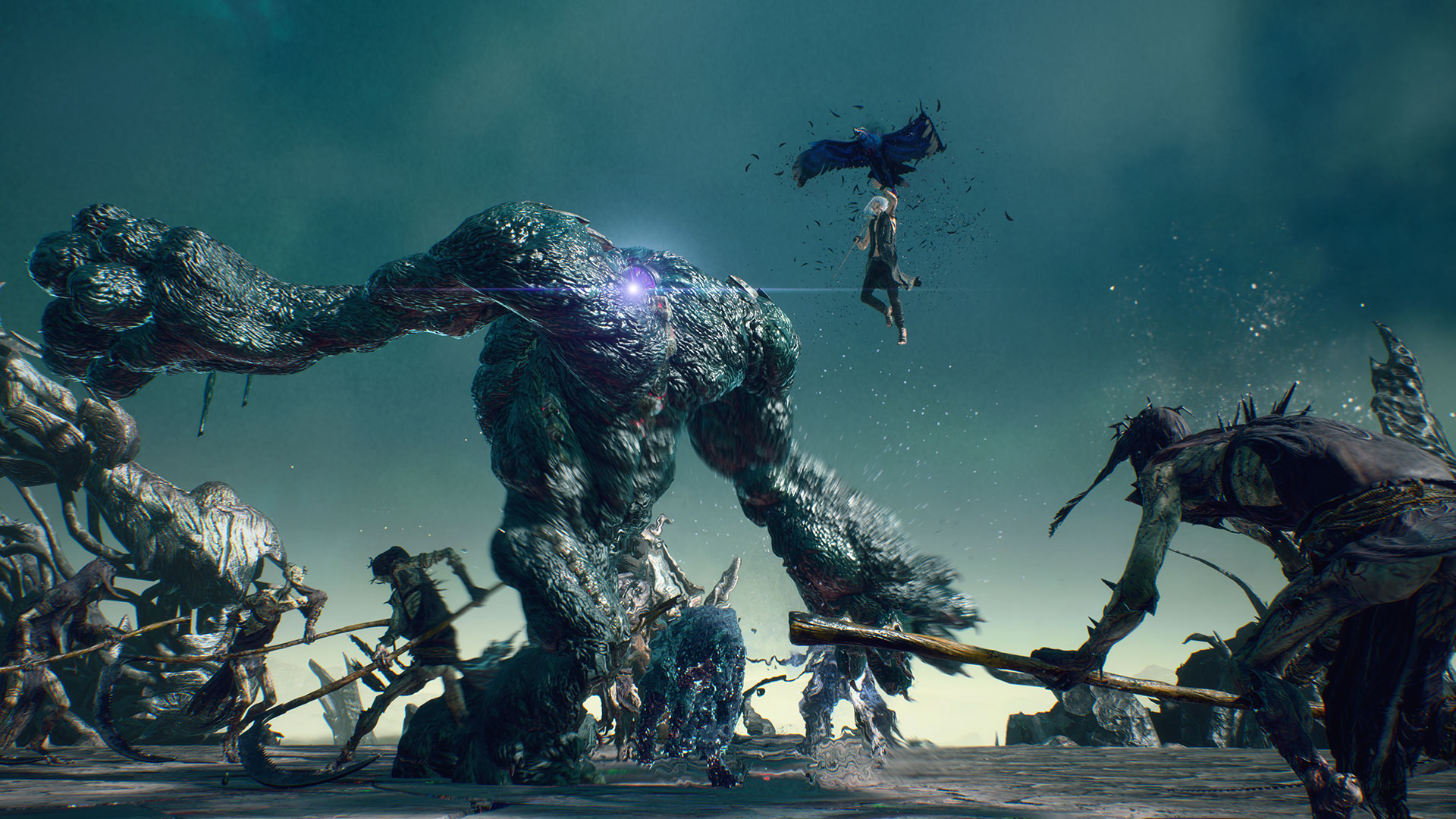 And then, there’s Dante. The man, the myth, the legendary devil hunter himself. He brings back his style-based gameplay from 3 and 4, with more weapons than any reasonable human being would know what to do with. The guy’s got his sword sure, as well as his iconic twin pistols Ebony and Ivory, but he’s also got a shotgun, magic nunchucks that become a bo staff, the Balrog, Sparda, Lady’s Kalina Ann, a Kalina Ann replica that you can combine with the original to make dual wielded rocket launchers, a motorcycle that also doubles as a pair of chainsaws, and a hat that shoots your money at your enemies, because at this point why not?

Dante’s potential is just insane. There is nothing the man can’t do and you can spend hours and hours in the training room mastering all the weapons and style moves you got, only for you to play a level, buy an upgrade, and discover even further depths to his fighting style. Did you know upgrading the Trickster style enough gets you infinite dashes now? Back in DMC 4 you needed to rapidly switch to a new style and switch back to Trickster in order to spam your dash. Now you can just concentrate on seeking out an enemy to air trick to while dashing to avoid enemy fire, swap to Swordmaster, and begin your overly long, ultra stylish beatdown. It rocks. 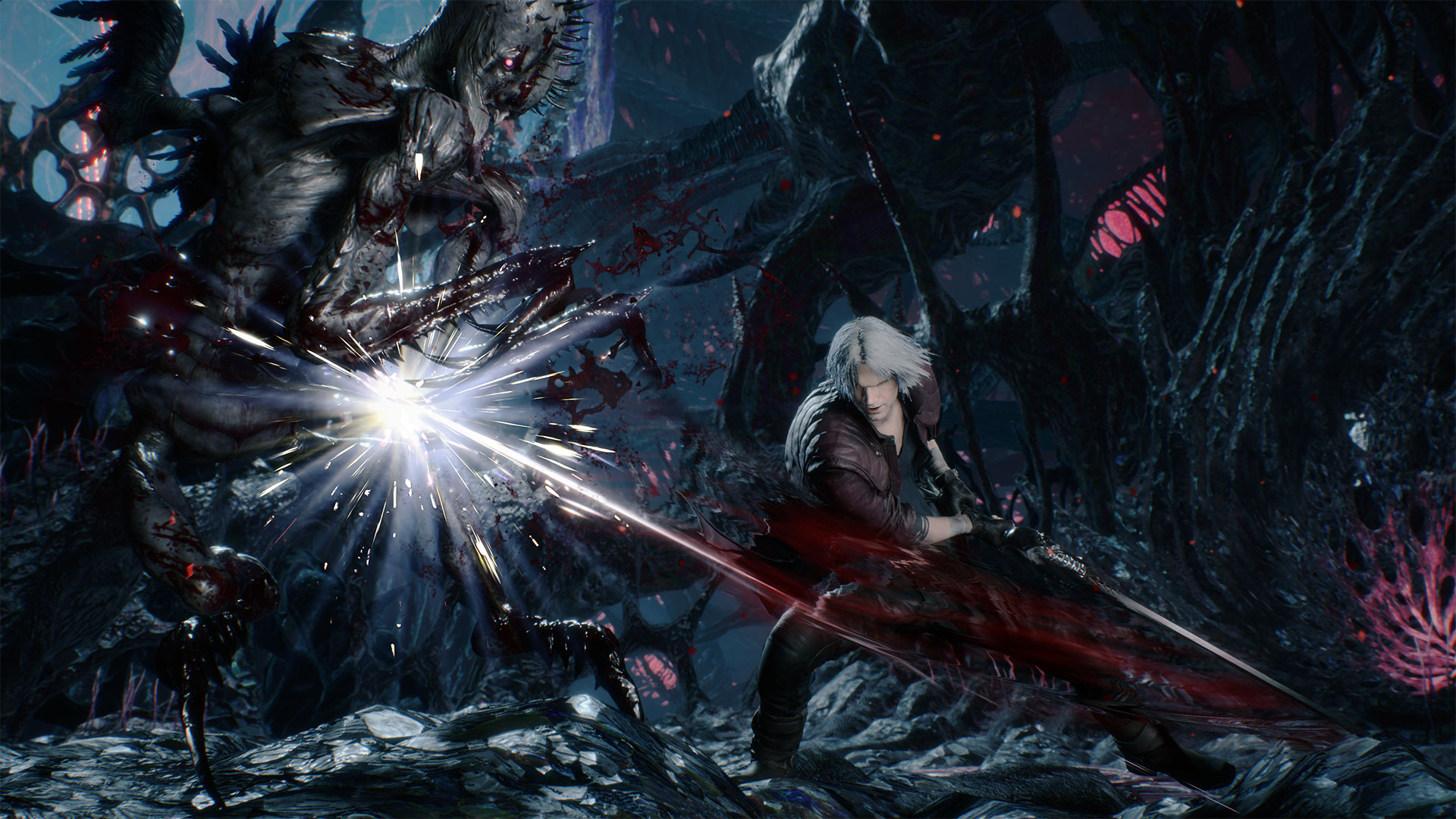 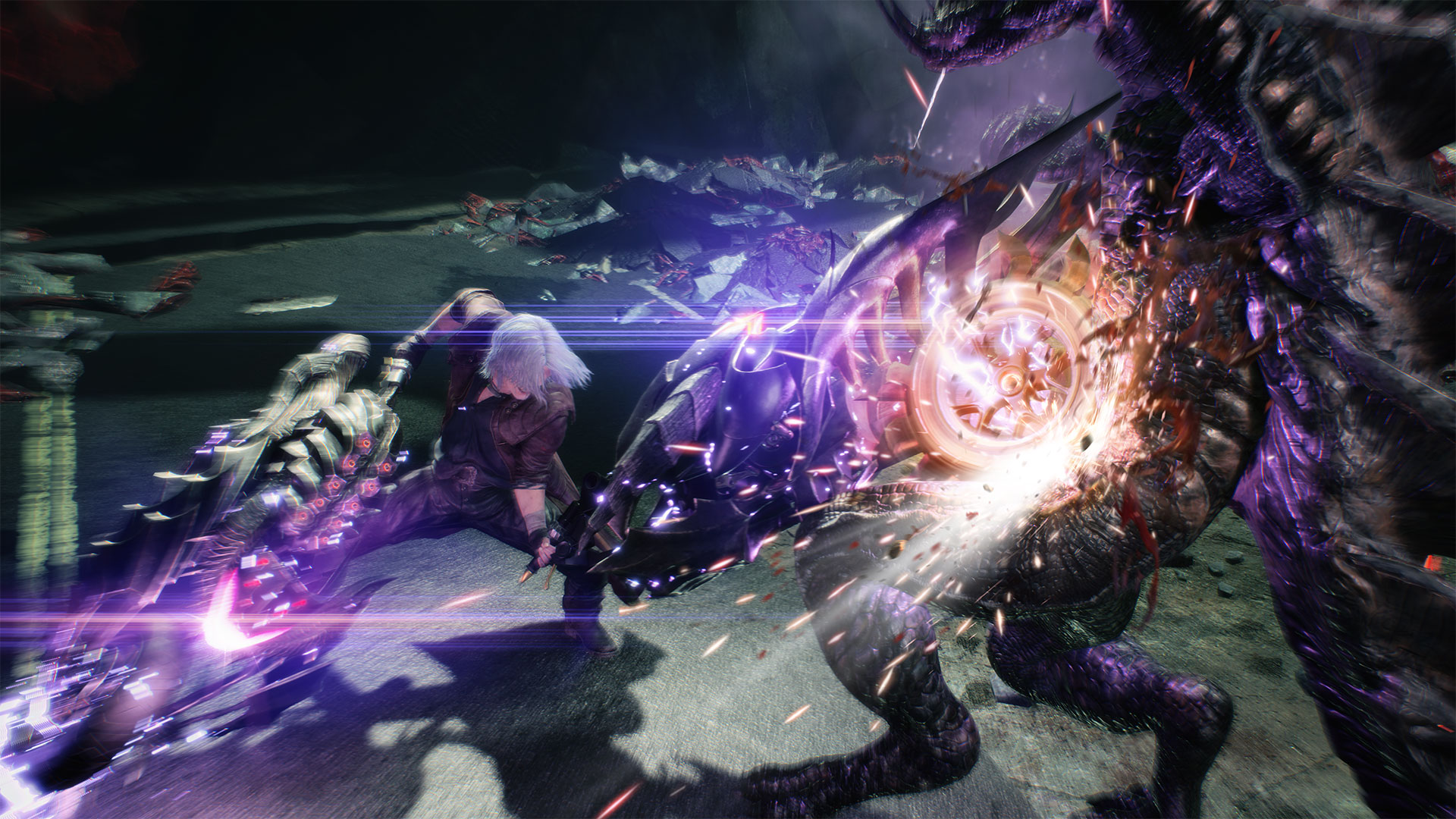 In all honesty it’s rather difficult to name anything particularly wrong with Devil May Cry 5. The game plays amazing, looks gorgeous, and has some genuinely hilarious cutscenes that assure you the developers were having  just as much fun with DMC’s return as you are. I suppose you could say that the (nonintrusive) presence of microtransactions on a fully priced single-player game is a bit of a bummer, and it does suck that Trish and Lady both heavily feature in the story and yet only exist to be damsels in distress despite being, in Dante’s own words, “two of the most badass women on the planet”. Instead, their own adventure merely gets teased at the end as an obvious sequel/DLC hook. Damn you Capcom, you knew I would shell out for playable Lady!

If you’re somehow still reading at this point, I appreciate your patience, but also wish you would go away. Go on. Shoo. Get Devil May Cry 5 yourself and let me end this review, those S ranks aren’t going to earn themselves.