ASUS is known for manufacturing some of the best motherboards in the market ranging from entry-level, affordable motherboards to high-end, over-the-top enthusiast boards. With the release of Intel’s Haswell-based chipsets, ASUS has released their wide array of Z97 motherboards which include the very affordable Z97-Pro Gamer motherboard which we used for our new gaming and editing rig to see how well it performs in spite of its relatively lower price tag.

The packaging of the Z97-Pro Gamer is fairly simple with the usual array of logos, labels, specifications, and images. There’s nothing fancy going on here which is quite fine and acceptable given that the Z97-Pro Gamer an entry-level motherboard so keeping the packaging simple helps in keeping the price of the board lower. Aside from the motherboard itself, the box contains a User Guide, a DVD with drivers and software, safety information, a motherboard layout print out, the I/O panel cover, two straight SATA cables, two right-angled SATA cables, and an SLI bridge.

The Z97-Pro Gamer features a fairly simple design with not much of the flair that you would usually see on the company’s higher-end boards such as its ROG and TUF series. It does keep the company’s signature red and black colors with the black PCB and components as well as the red accents on the chipset shroud and heatsinks. Overall, the design of the Z97-Pro Gamer is pretty straightforward and purposeful without any bells and whistles which also helps keep its price down. 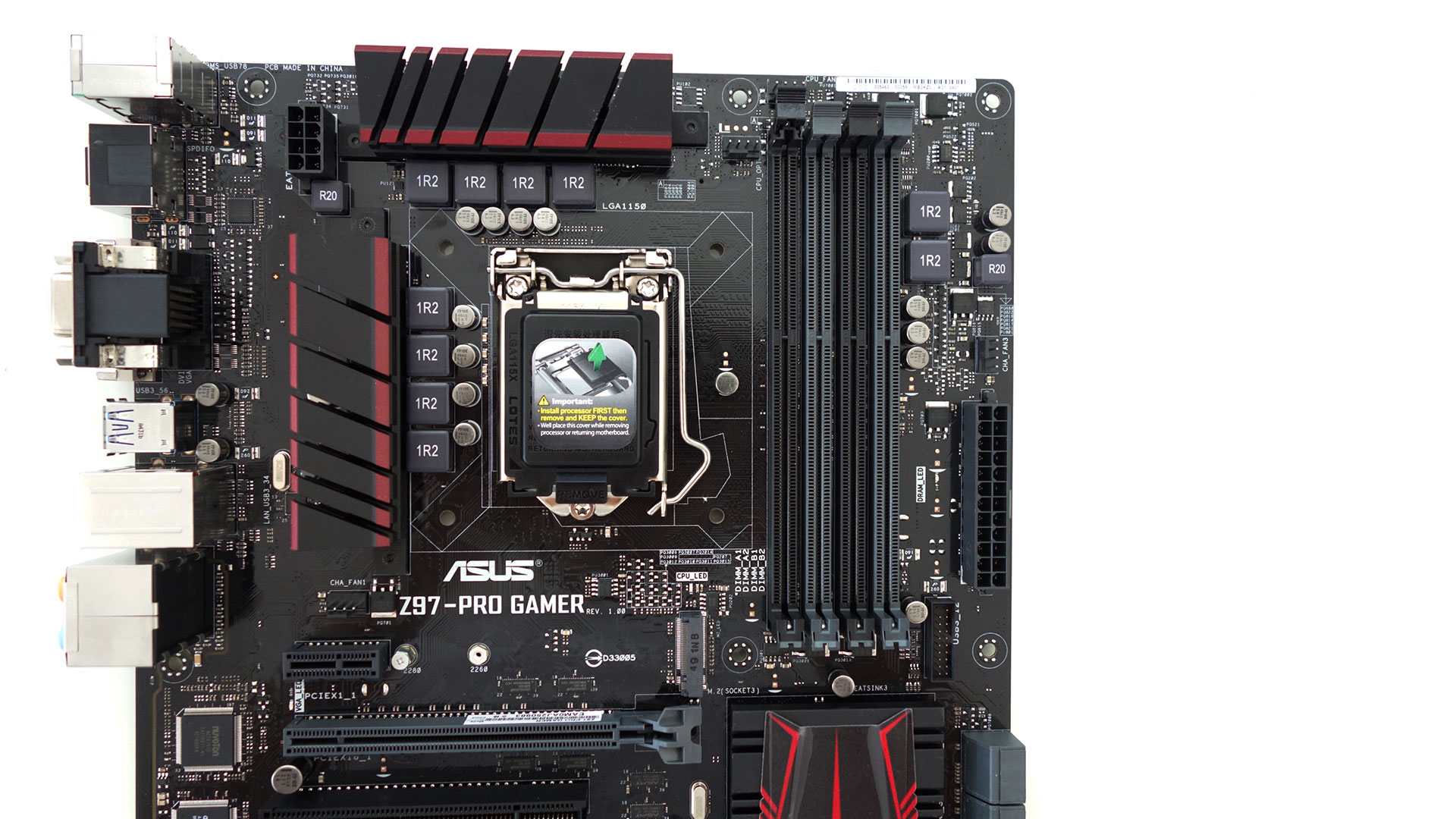 As its name implies, the Z97-Pro Gamer is equipped with Intel’s Z97 chipset and as such supports Intel’s LGA1150 socket processors which include 4th, New 4th & 5th Generation Intel Core, Pentium, and Celeron processors which includes Haswell, Haswell Refresh, and Broadwell CPUs. The Z97-Pro Gamer also has four dual-channel DIMM slots that support DDR3 RAM sticks up to 3200MHz.

There are slew of expansion slots and I/O ports on the Z97-Pro Gamer including two PCIe 3.0 x16 slots that support either SLI or CrossFireX which gives PC builders access to dual graphics card setups at a lower budget. There is also one PCIe 2.0 x16 slot, two PCIe x1 slots, and one PCI slot for other expansion cards such as a Wi-Fi card or PCIe-based SSD. 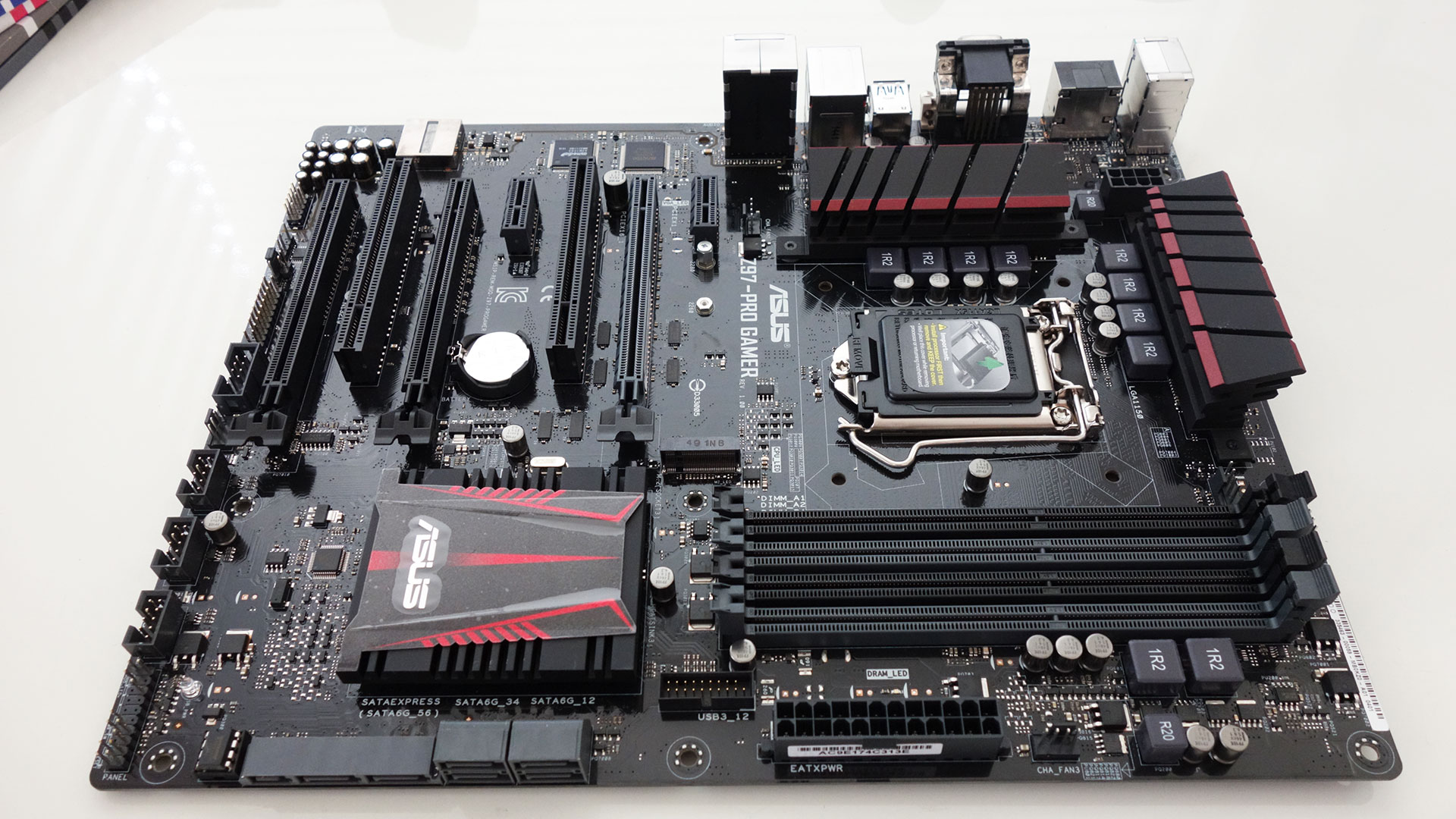 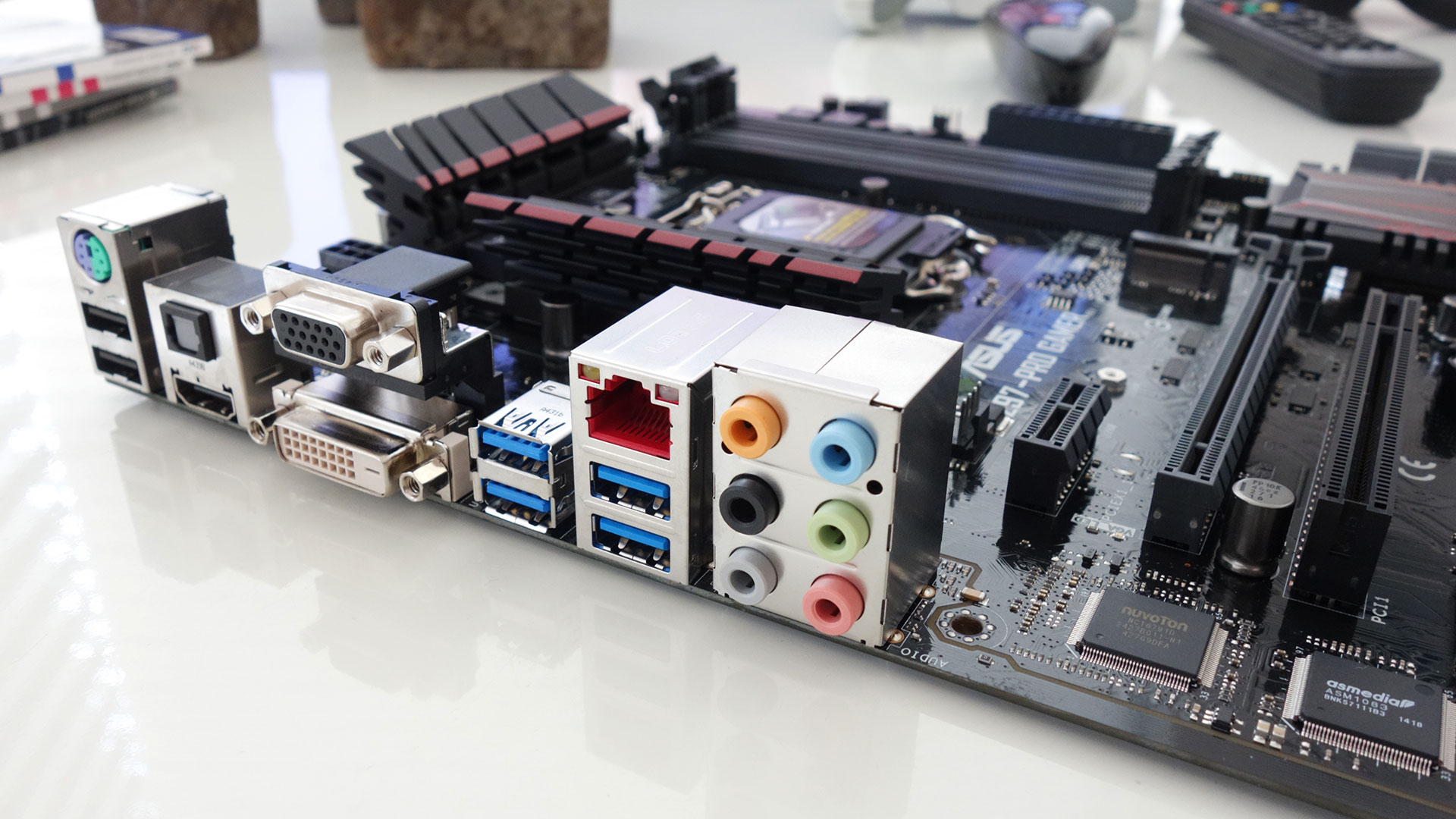 The ASUS Z97-Pro Gamer comes with company’s set of exclusive features that not only make using and setting up this motherboard easier but also increases its performance and reliability in several ways.

The first of the Z97-Pro Gamer’s features that you’ll be able to access is the company’s award-winning UEFI BIOS. The utility is divided into an EZ Mode and an Advanced Mode. EZ Mode allows even those who are mostly unfamiliar with BIOS or motherboard settings to quickly set up some of the motherboard’s most basic options such as the boot order, fan speeds, XMP profiles, and adjust the motherboard date and time, among others. EZ Mode also displays basic real-time system monitoring information and gives access to an EZ Tuning wizard which will guide and let users adjust automatic overclocking and RAID configurations.

On the other hand, the Advanced Mode gives users access to a slew of customization and tuning for the motherboard and the computer’s different components which include access to advanced overclocking features such as adjusting memory timings and voltage. While it doesn’t have the same amount of options and customization that higher-end ASUS motherboards do, it has enough to allow users to give their rigs a decent enough boost in performance. Additionally, the UEFI BIOS features CrashFree BIOS 3 and EZ Flash 2 which let users restore and update the BIOS using just a USB drive.

Customizing and tuning our rig with the Z97-Pro Gamer was fairly easy using the UEFI BIOS. We were able to overclock both our rig’s CPU and RAM without much effort. We were able to slightly overclock our CPU to 4.4GHz from 3.5GHz and we were able to boost our RAM’s frequency from 1866MHz to 2133MHz by simply adjusting voltage and timings, respectively. 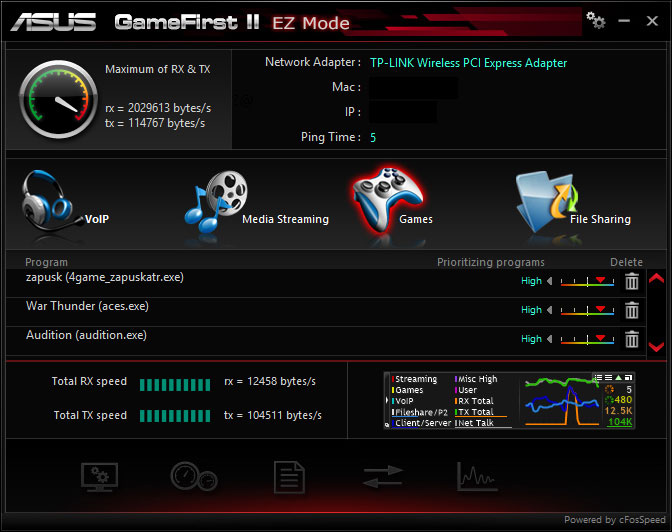 As the Z97-Pro Gamer is built specifically for gamers, it isn’t a surprise that ASUS has packed it with a couple of features designed for gaming. The first, and probably most impressive, is the motherboard’s GameFirst II which uses cFOs network traffic shaping technology to adjust your computer’s bandwidth usage and give priority to your chosen applications such as online games and VoiP software to improve your ping and reduce lag. Like the motherboard’s UEFI BIOS, GameFirst II also has EZ and Advanced modes for both beginners and advanced users.

In our time with the Z97-Pro Gamer, GameFirst II has proven very useful for us in a number of situations. It allows us to play online games, use VoiP software, stream music, and download files all at the same time without suffering from higher ping or increased lag. It must be noted though that the performance and capability of GameFirst II is very dependent on the quality and speed of your internet connection so your mileage may vary with it. 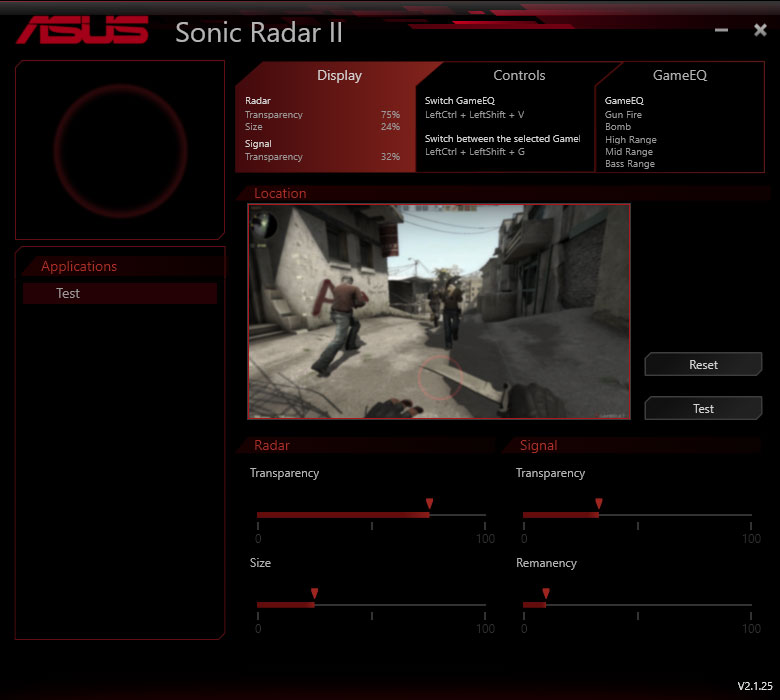 The second gaming-centric feature ASUS has bundled with the Z97-Pro Gamer is Sonic Radar II which is designed specifically for first-person shooter games. When used, Sonic Radar II display an in-game overlay that gives visual cues based on the precise direction and origin of in-game sounds such as gunshots, footsteps, and more which will allow you to pinpoint where you opponents are and give you an edge. The Sonic Radar II software lets users customize the look of the overlay as well as adjust the level of in-game sounds with its GameEQ menu.

ASUS has also included the company’s AI Suite III software with the Z97-Pro Gamer. AI Suite III is a one-stop utility for tuning your motherboard and computer, looking up your rig’s specifications, and update your BIOS. The key feature of AI Suite III is its Dual Intelligent Processors 5 with 5-Way Optimization which automatically and dynamically adjusts your rig’s TPU, EPU, and Digi+ VRM module for maximum performance or power efficiency. It also has Fan Xpert 3 and Turbo App features which let you control your rig’s fans and give processing priority to specific applications, respectively. Lastly, AI Suite III comes bundled with the company’s USB 3.0 Boost technology which increases the transfer rate of the Z97-Pro Gamer’s USB 3.0 ports by up to 33%. AI Suite III is an extremely useful utility for both beginner and enthusiast users as it provides a convenient platform for fine-tuning your rig. Its features make it easy for users to get either a bit or a lot more performance from their rig with minimal risk. 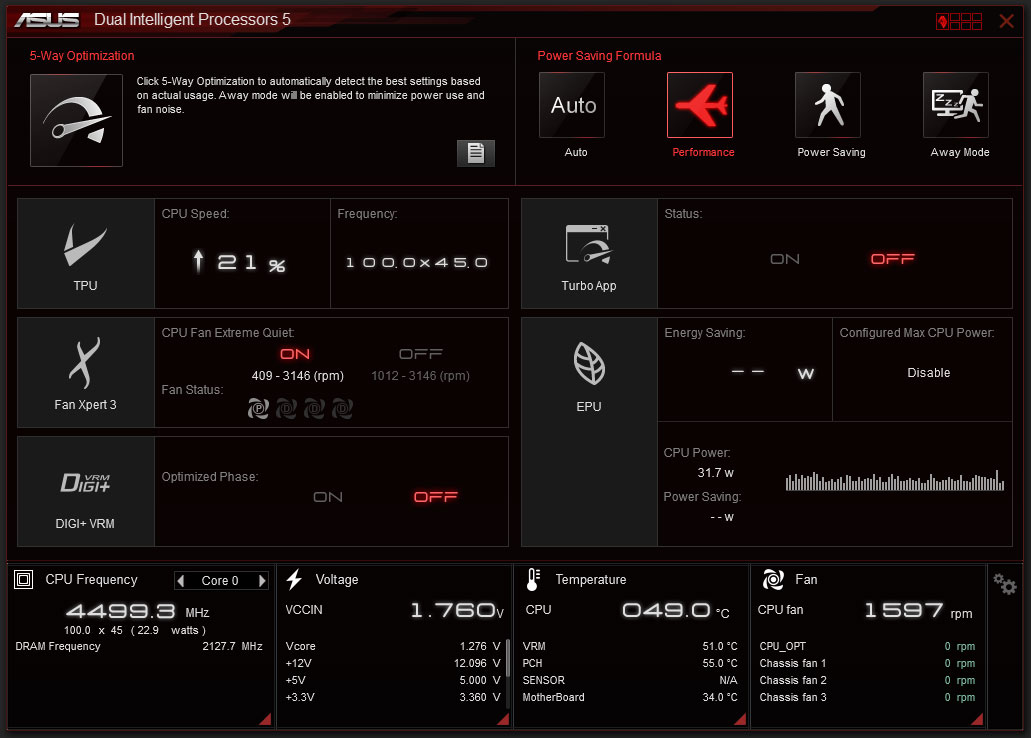 Aside from its slew of exclusive software features, the Z97-Pro also comes with a hefty amount of hardware features that not only improve its performance but also improve its reliability and durability. These include the company’s LANGuard technology, SupremeFX audio system, and Gamer’s Guardian components.

With LANGuard, ASUS has created their own RJ45 LAN port which features improved signal-coupling technology and surface-mounted capacitors that improve the port’s throughput and connection reliability. It also features surge protected as well as electrostatically-guarded components that protect the motherboard and the rest of the rig’s components from power surges and static electricity by increasing the port’s tolerance to both by up to 100%. 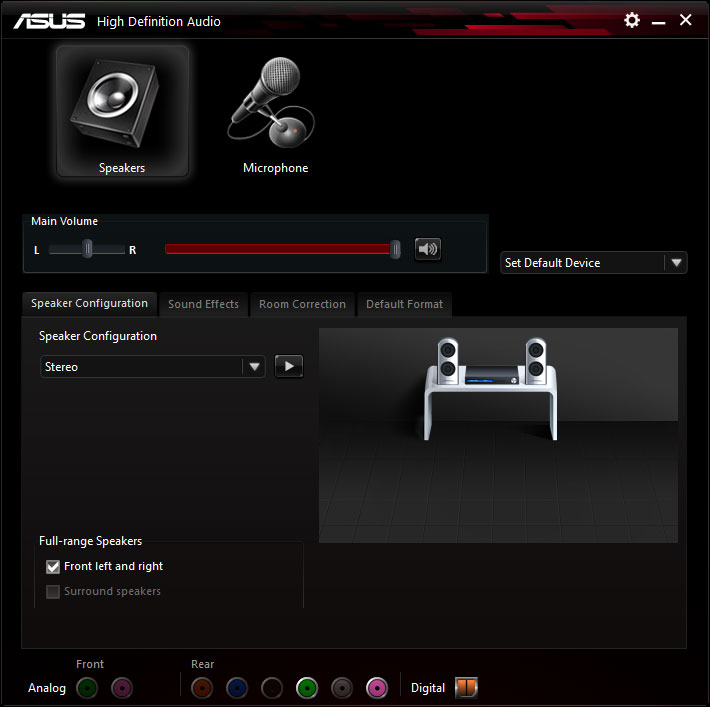 The Z97-Pro Gamer also features the company’s SupremeFX technology which is the company’s own audio system that compliments the motherboard’s built-in Realtek audio chipset. SupremeFX comes with features that are meant to improve the audio quality of the Z97-Pro Gamer to eliminate the need for additional dedicated sound cards. These features include red-line shielding which separates the SupremeFX components from the rest of the motherboard to eliminate electronic interference. It also comes with an EMI cover that protects and isolates the chipset from electromagnetic interference.

The SupremeFX system also includes a headphone amplifier which features a load impedance of 300? as well as ELNA audio capacitors to give the audio a unique, warm, and natural sound signature. All of these features in addition to its signal-to-noise ratio of 115db make the Z97-Pro Gamer’s SupremeFX audio system quite adequate for any gamer and is definitely a step up from the generic on-board audio systems usually found on many other motherboards in the market.

Lastly, ASUS has kitted out the Z97-Pro Gamer with its Gamer’s Guardian set of premium components which include a DIGI+ VRM voltage-regulator, DRAM overcurrent and short-circuit protection via onboard resettable fuses, 10k Japanese Nichicon GT black metallic solid-state capacitors that are said to last five times longer and are 20% more durable than generic capacitors, a stainless steel back I/O panel, and ESG Guards for the motherboard’s keyboard and mouse connectors, VGA connector, USB 3.0/2.0 ports, the aforementioned LANGuard RJ45 LAN port, and the SupremeFX-powered front and back audio ports.

Overall, the Z9-Pro Gamer is an exceptional motherboard choice especially for those who want decent performance and quality at a very affordable price. It may not have the looks of ASUS’s higher-end ROG and TUF motherboards but it makes up for it with an impressive array of great and useful features that improve the performance of the components that are attached to it and increase its value way over its price tag. We recommend the Z97-Pro Gamer to both budget builders and gamers who want to save money on their motherboard choice to put more into their rig’s other components like the CPU or graphics card or those who just want a great performance motherboard at an affordable price.