When the first ROG Zephyrus was released back in 2017, the laptop’s thin and light design coupled with its powerful hardware opened up a whole new tier in the company’s roster of gaming notebooks. Since then the company has released several iterations of the series including several versions of the Zephyrus S and Zephyrus M.

In spite of the multiple variants and models the Zephyrus line has come out with, the line has always been placed on the top-end of the company’s pricing brackets. And as new innovations and technology have been introduced with each new model, the price of the Zephyrus laptops has only gotten higher, making them even more inaccessible. But that seems to be changing with the release of the ROG Zephyrus G GA502.

The Zephyrus G is the company’s attempt at a more affordable Zephyrus. Priced at only PHP 85,000, it’s the most affordable Zephyrus laptop ever released. The company was partially able to achieve this by equipping the GA502 with AMD’s top-end Ryzen 7-3750H processor and partnering with NVIDIA’s GTX 1660 Ti. And, as expected, a few other things had to be adjusted to be able to bring the price of the Zephyrus G to where it is. 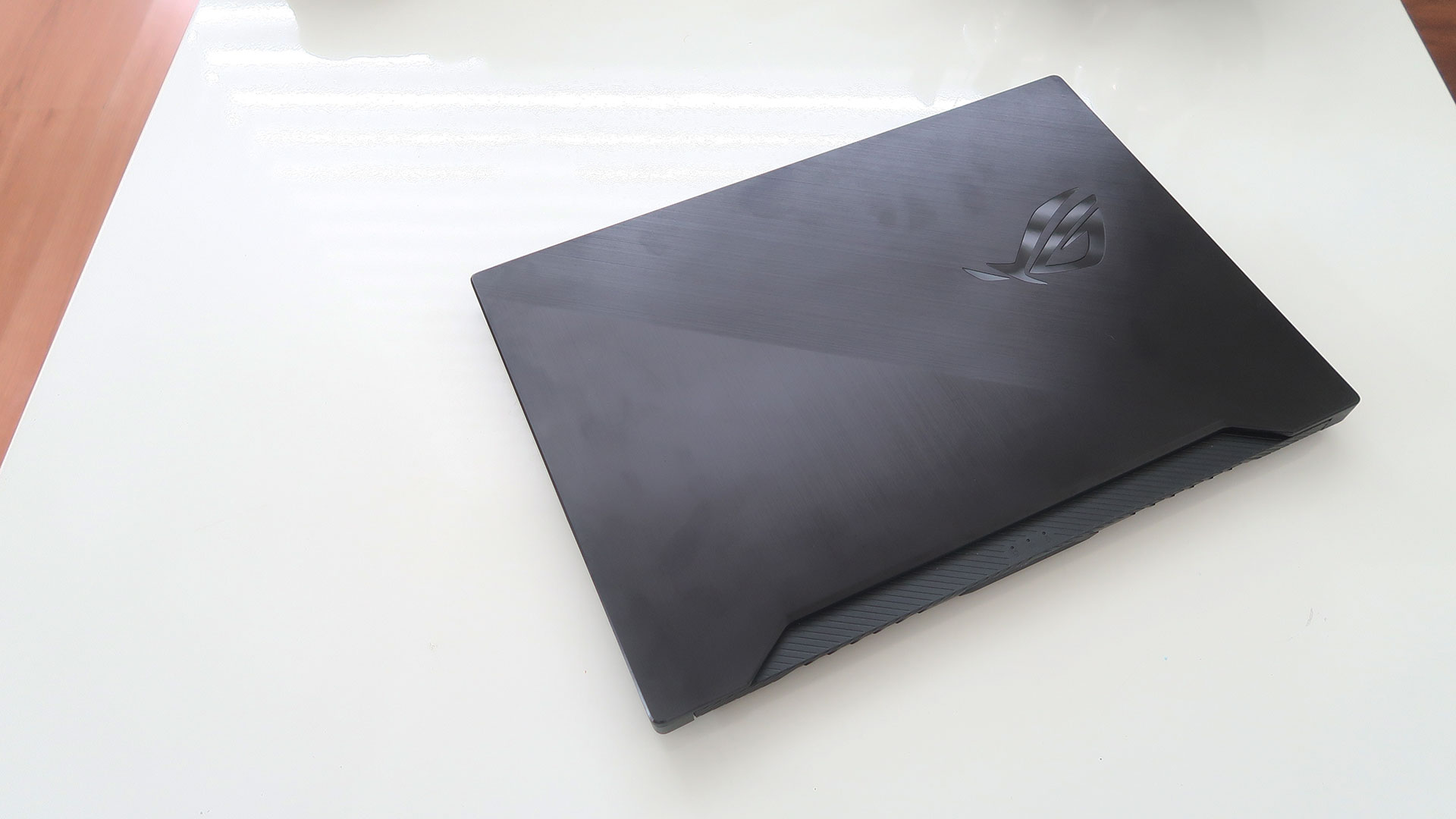 The Zephyrus G takes design cues from the older Zephyrus M GM501, with several significant changes. One of the biggest differences is the switch from a full-sized keyboard to a tenkeyless layout. Another is the disappearance of the Active Aerodynamic System that the Zephyrus line has become known for. And lastly, like the rest of the current line of Zephyrus laptops, the bezels of the GA502’s display have been minimized, allowing its body to be more compact.

The minimal bezels and the smaller keyboard has allowed the GA502 to still be as compact as its more expensive siblings. With a footprint of only 36 x 25.2 cm, the GA502 is incredibly compact. Unsurprisingly, it isn’t as thin and light as the new Zephyrus M GU502, measuring 2.04cm and weighing 2.1kg compared to the latter’s 1.9cm and 1.9kg. Regardless, the GA502 is still impressively compact for a gaming laptop in its price range. 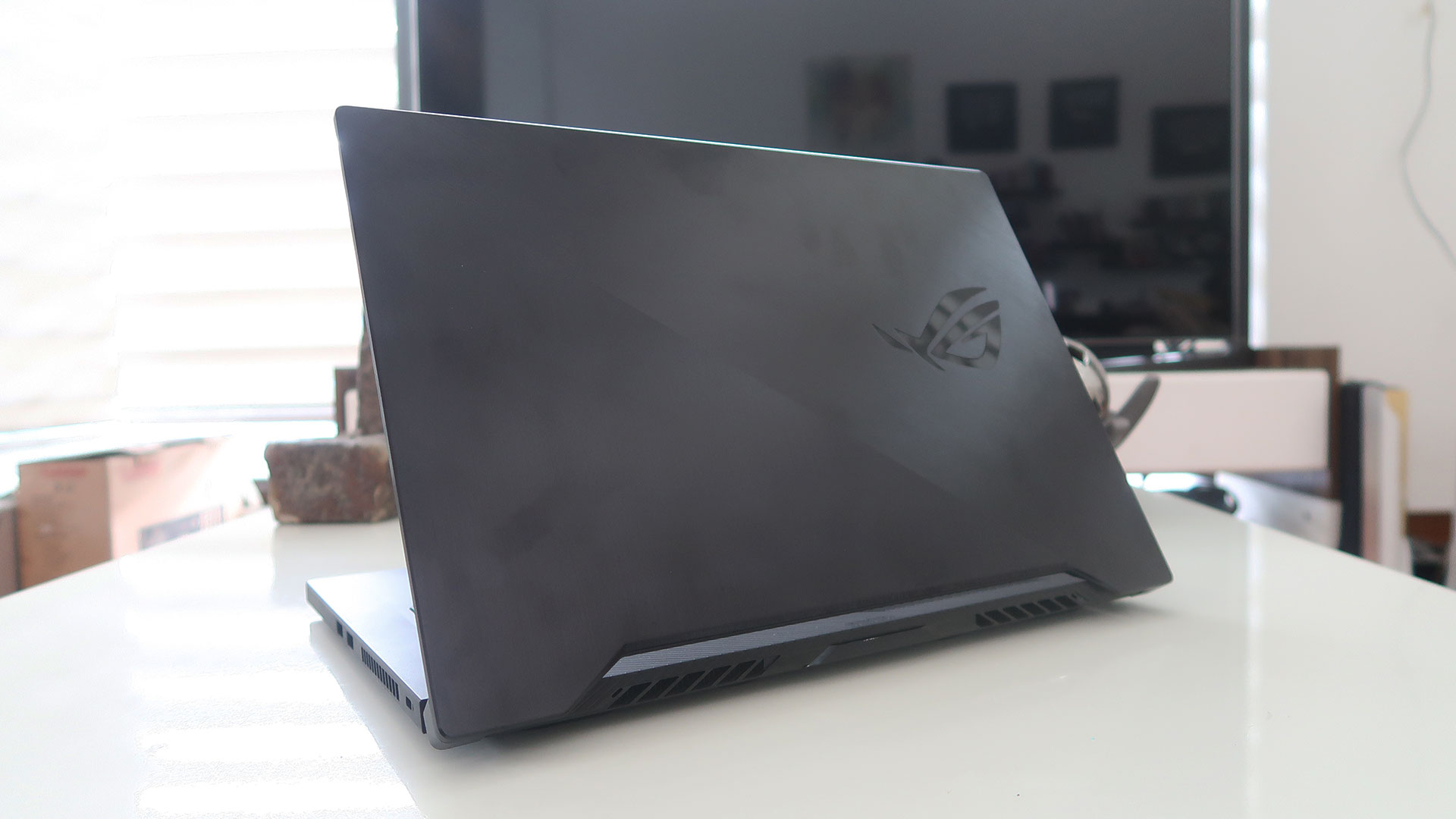 The GA502, along with the rest of the new line of Zephyrus laptops, features a simple and unassuming design that doesn’t really scream “gamer” from the top of its metaphorical lungs. Its body comes in a plain matte black, with the palm rest featuring a soft-touch texture. The top cover of the Zephyrus G still features the same dual-direction brushed aluminum design and large ROG logo of its siblings but the latter only slightly glows red when the laptop is on.

It must be said though that the entirety of the Zephyrus G is a magnet for fingerprints, oil, and dust, so a microfiber cloth will come in handy if you want to keep it looking clean.

In spite of its more affordable price tag, the body of the GA502 is still impressively sturdy and one of the most rigid laptops we’ve ever used in this price bracket. There was barely any flex on any part of the palm rest and flex around the center of the keyboard, where its most commonly seen, was almost non-existant, which was an incredibly pleasant surprise that made typing on the GA502 much more pleasant. 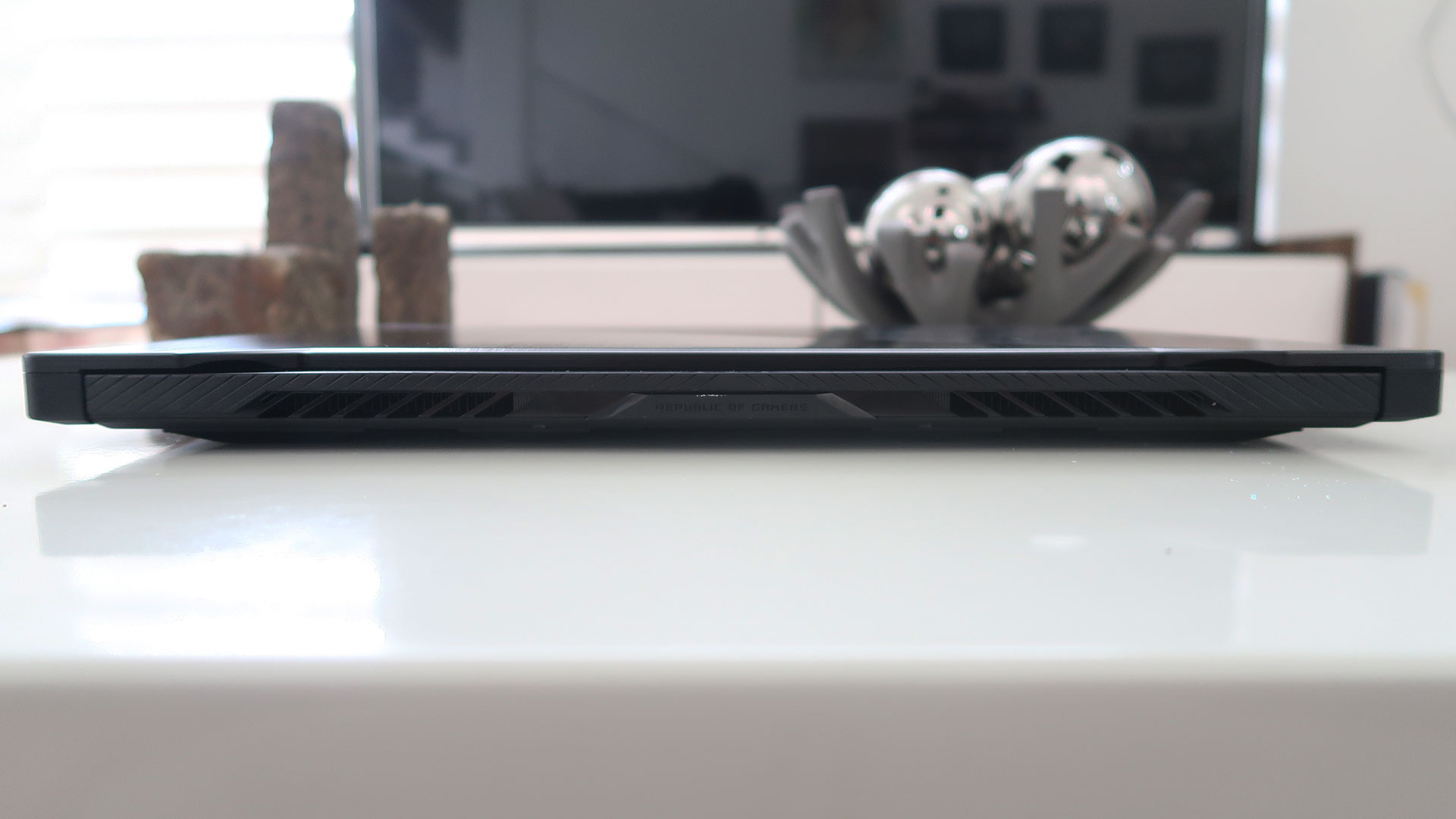 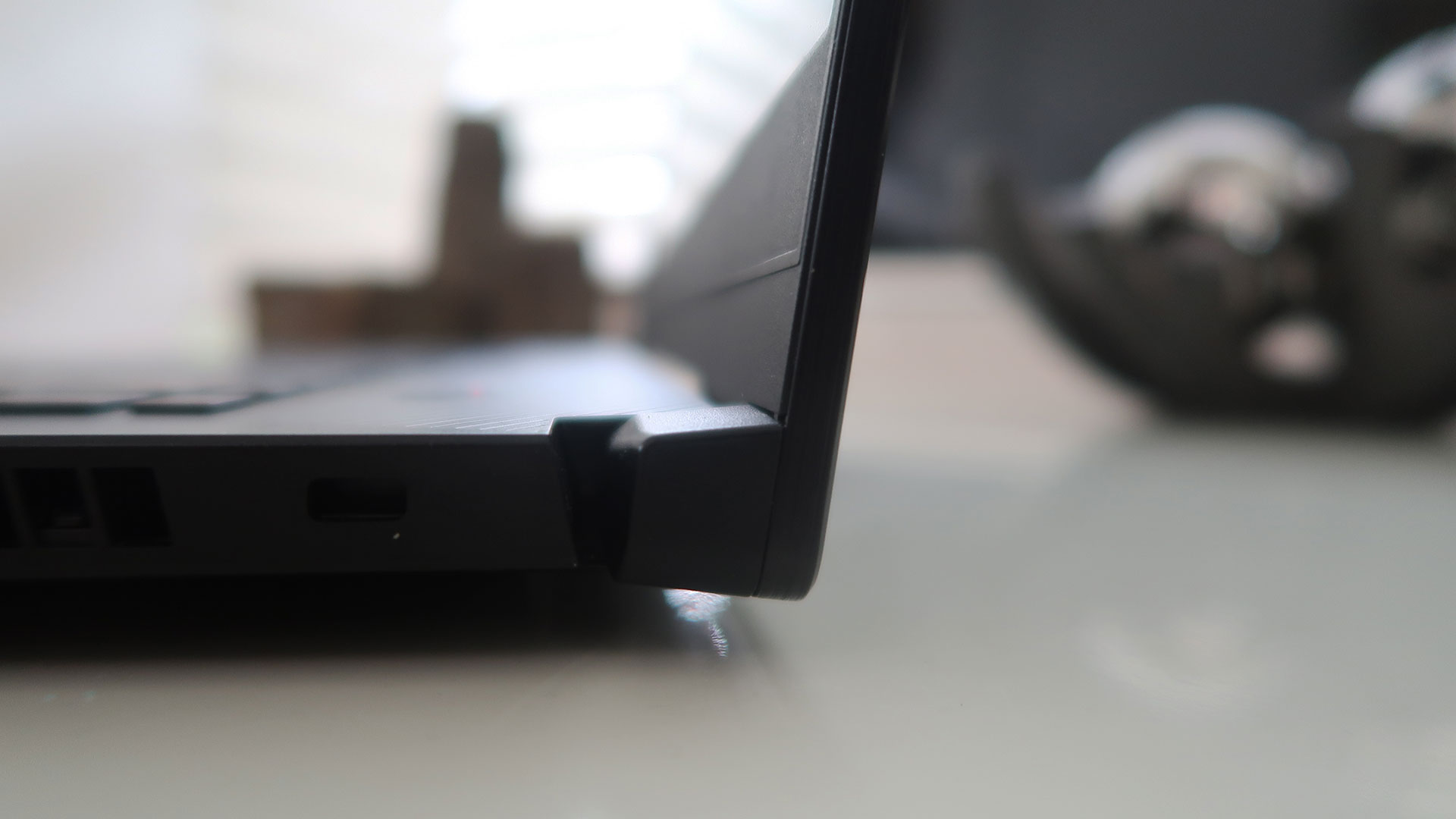 Above the keyboard of the GA502 is the same row of shortcut buttons found on the other Zephyrus models as well as the laptop’s hexagonal power button. Also above the keyboard is a row of diagonal slits that serves as the air intake for the GA502’s cooling system. There are also intake vents on the bottom of the laptop while the exhaust vents can be found on the rear and right-hand side of the body.

When not gaming, the GA502 is impressively cool and silent. There’s barely any warmth under the keyboard or on the underside of the chassis. Things change when the laptop is used for gaming though. The middle-right of the keyboard, as well as the bottom of the laptop, get remarkably hot. Additionally, when the laptop does get hot, the fans of the GA502 become noticeably loud as well, capable of being heard over the audio of the speakers. 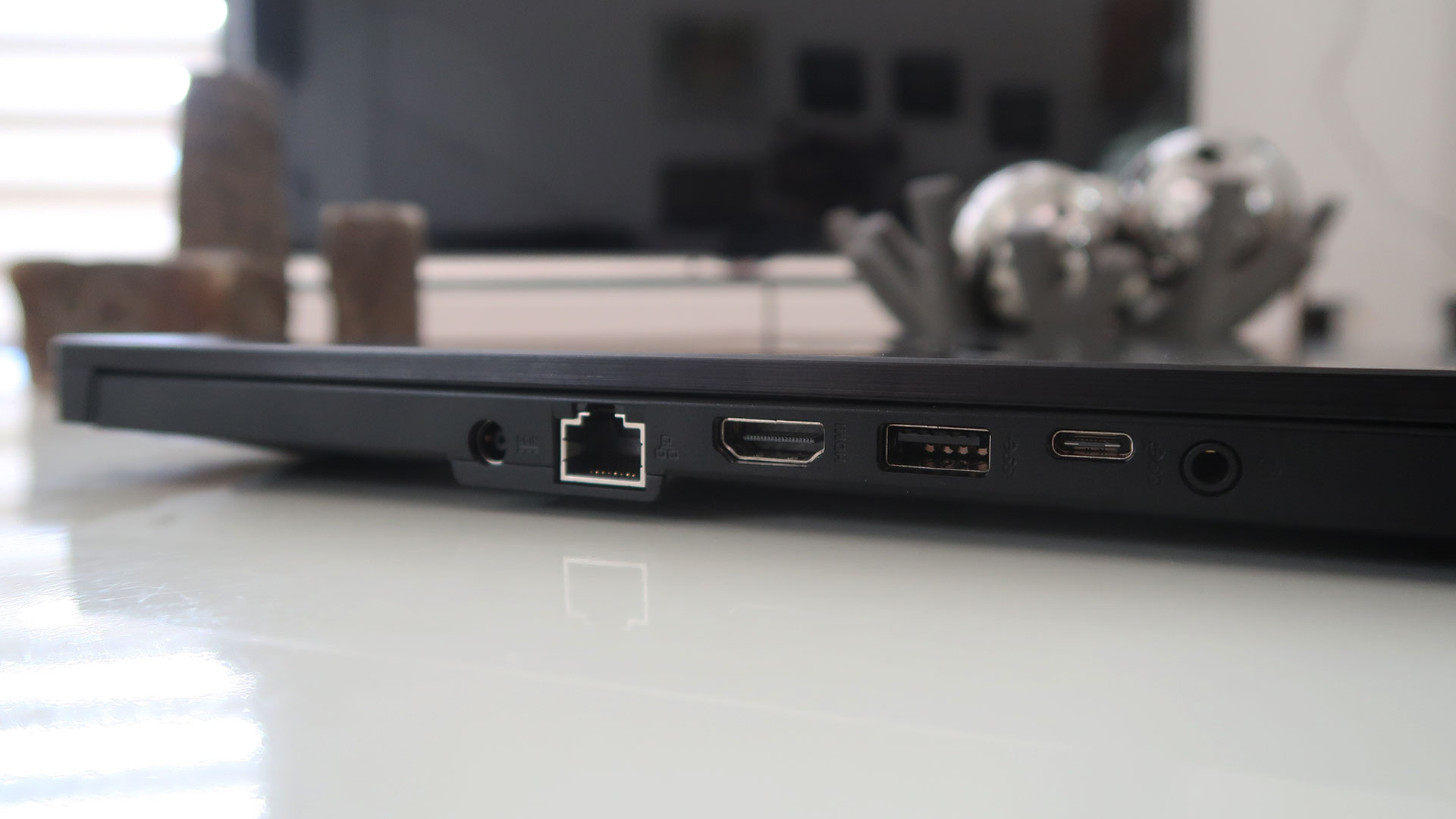 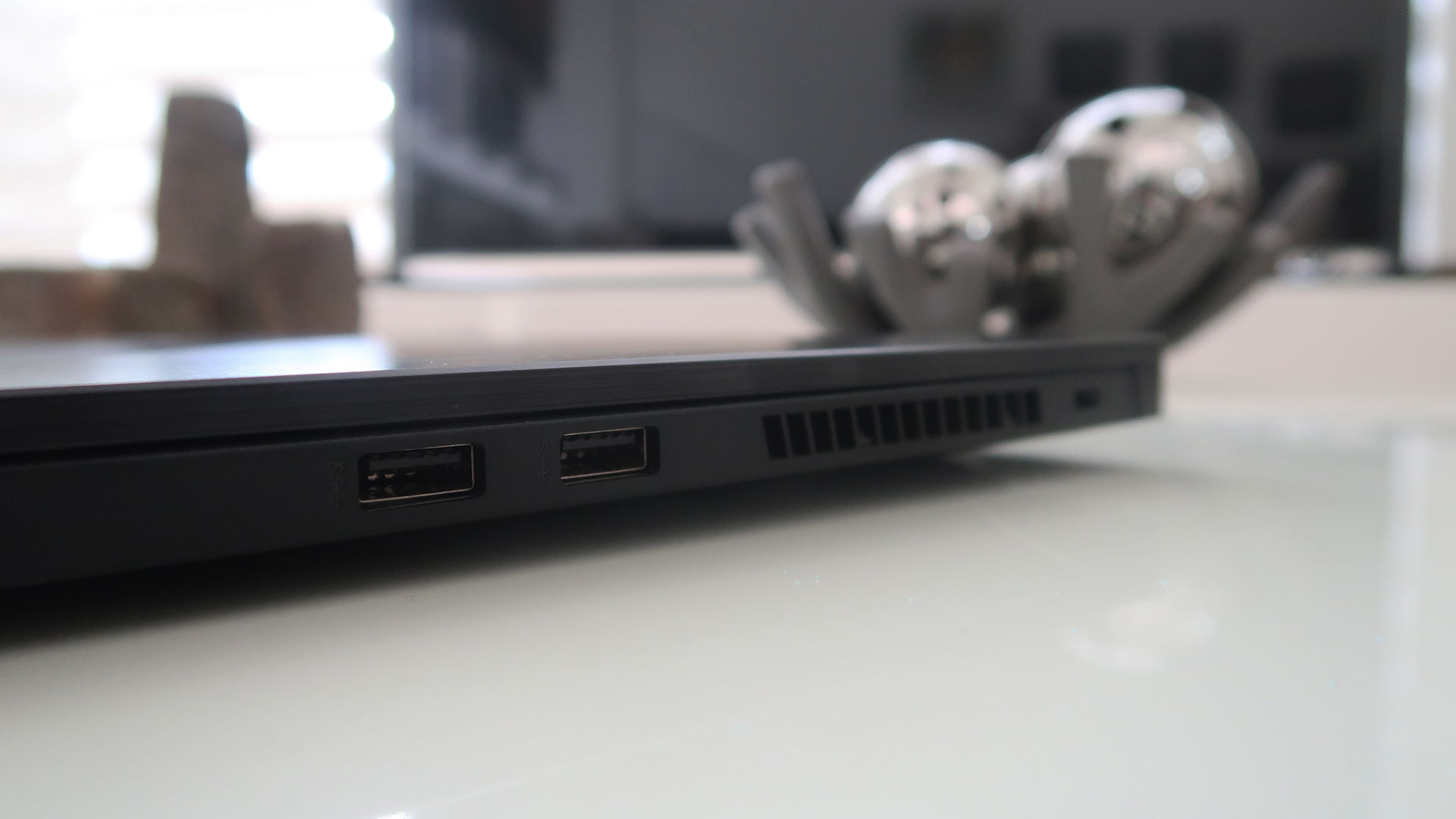 The Zephyrus G features a decent number of ports and connectors including a USB 3.1 Gen 2 Type-C port, three USB 3.1 Gen 1 Type-A ports, an HDMI 2.0b connector, a 3.5mm combo audio jack, and an RJ-45 jack. Surprisingly, the GA502 features one less USB port and a combo audio jack (instead of two separate 3.5mm connectors) when compared to the Zephyrus M GU502 despite featuring pretty much the same design. While this isn’t really a deal-breaker, it’s still curious that ASUS didn’t include the same set of ports and connectors.

As previously mentioned, ASUS has decided to forego the Numpad and go back to an 80% keyboard layout with the GA502. While the spacing and positioning of the keys are mostly decent, the position of the right Control key makes it difficult for those used to using it to tap it as it may be positioned too far to the left. 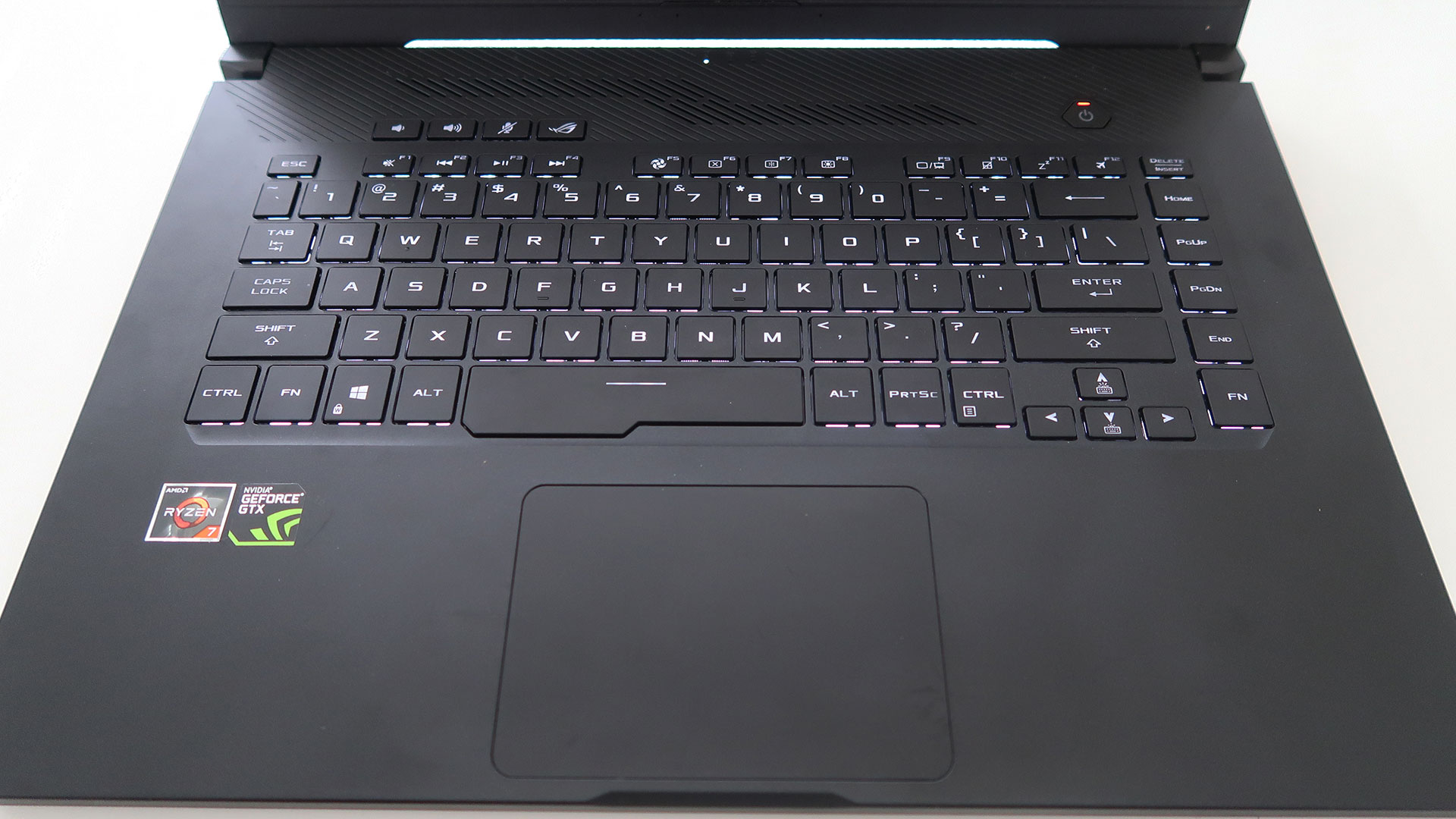 Regardless, it didn’t take long for us to get accustomed to the GA502’s keyboard, with its low-profile keys, despite coming from a desktop mechanical keyboard. And once we got used to it, the GA502’s keyboard gave us one of the better typing experiences we’ve had on a laptop with similar keys.

The touchpad of the Zephyrus G doesn’t feature any dedicated buttons nor the ability to switch to a keypad, like the one on the new Strix laptops, but it’s still decently responsive to taps, push-down clicks, and gestures. It would have been nice if it was slightly larger but that isn’t much of an issue nor a dealbreaker. 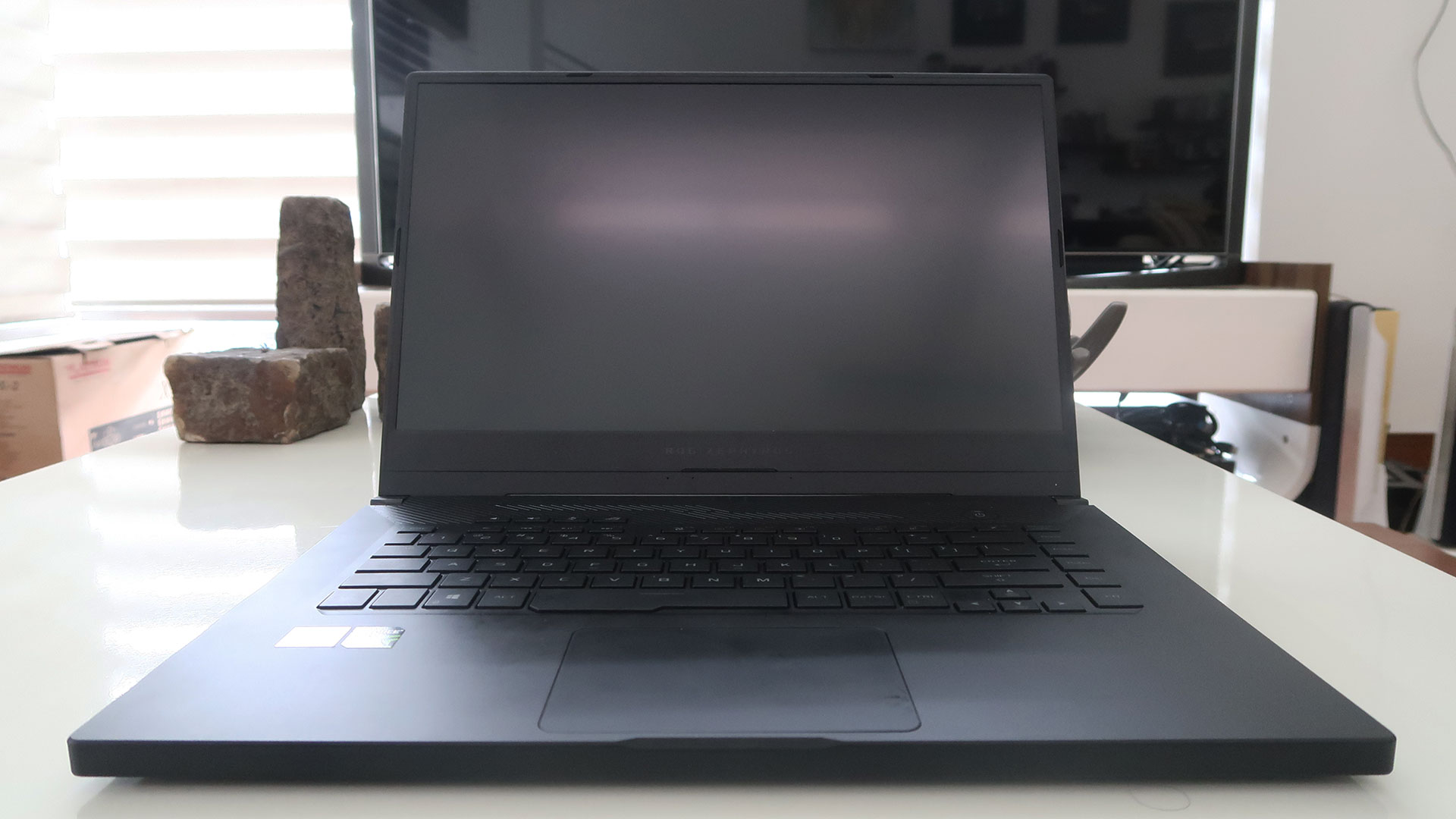 ASUS has equipped the GA502 with a 15.6-inch 1080p panel 120Hz panel, which is a pretty good combination of specs for a gaming laptop display. As previously mentioned, the display bezels of the Zephyrus G have been minimized to only 6.2mm, except for below the bezel. Sadly, the display on the GA502 is probably its biggest weakness and where ASUS cut the most corners to get the laptop’s price tag to where it is.

Even though it’s labeled as an IPS-level panel, the colors of the display look washed out and not as vibrant as you’d expect. Even the brightness of the display is on the low side. There were several times, especially when viewing videos, wherein I would’ve wanted to increase the brightness further than the available maximum. On the flip side though, the contrast and viewing angles of the Zephyrus G’s display were still pretty decent. 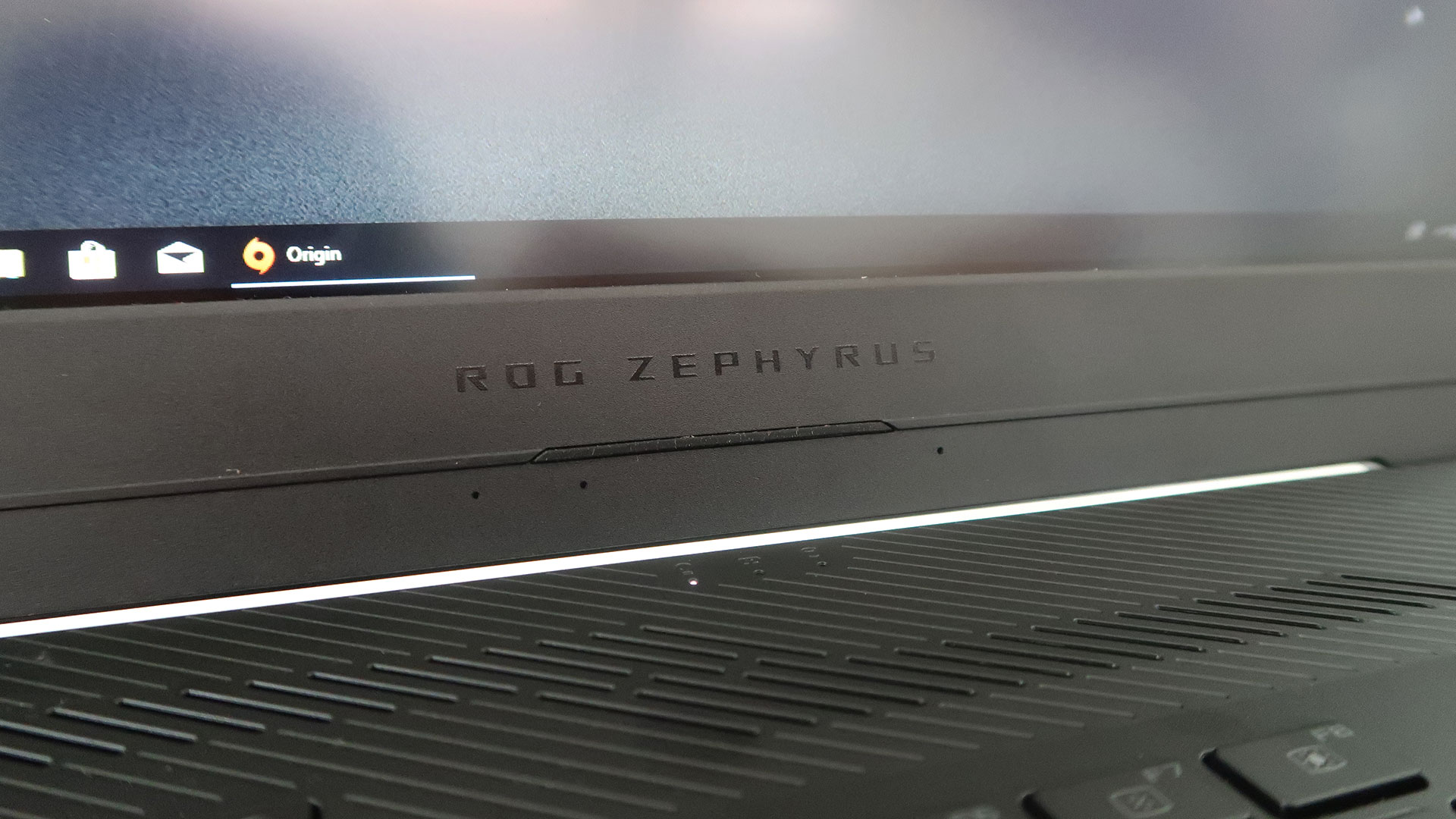 The Zephyrus G is equipped with two 1-watt speakers that are impressively loud with no noticeable distortion even when set to maximum volume. The audio quality is also mostly decent with clear mids and highs. The only issue with the speakers on the GA502 is the discernible lack of bass, which is expected with audio setups of this type. While the speakers are definitely fine for general media usage, those wanting a fuller sound will want to use good headphones.

The GA502 is equipped with a surprisingly large 76 Wh battery, which gives the laptop rather surprising battery life. When using the integrated GPU, the GA502 was able to last us almost 8 hours with light usage, which included web browsing and a bit of media consumption. Even when the laptop is switched to the discrete GPU, the battery of the GA502 lasted about four hours with the same usage, which is pretty impressive for a gaming laptop. 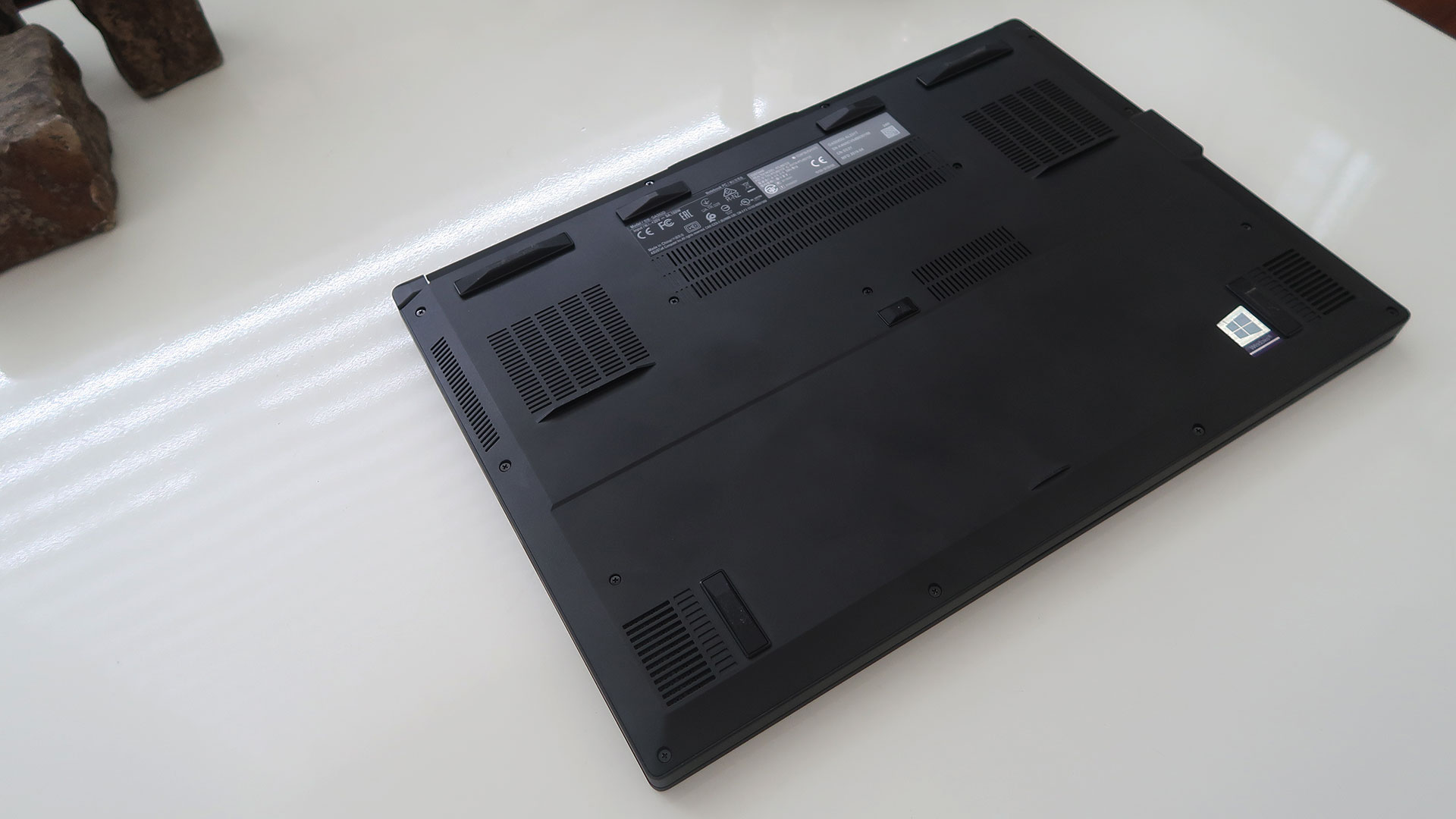 Apart from its Ryzen 7-3750H processor and GTX 1660 Ti GPU, the rest of the GA502’s specifications include 16GB (2x8GB) of DDR4 2400MHz RAM and 512GB of M.2 NVMe SSD storage. It’s a pretty impressive and surprising list of specs given the laptop’s price tag and we’re pretty happy that the company decided not to scrimp in this area just to bring down its price.

We ran the Zephyrus G through several benchmark tests including Cinebench R15, Cinebench R20, 3DMark, and PCMark 10, as well as the built-in benchmark tools of Rise of the Tomb Raider, Deus Ex: Mankind Divided, Assassin’s Creed: Odyssey, Final Fantasy XV, F1 2019, World War Z, and Far Cry 5. We also recorded several rounds of Dota 2, Apex Legends, and CS:GO to get their average framerates. Lastly, we tested the laptop’s included SSD through CrystalDiskMark and AS SSD.

Here are the results from our benchmarks: 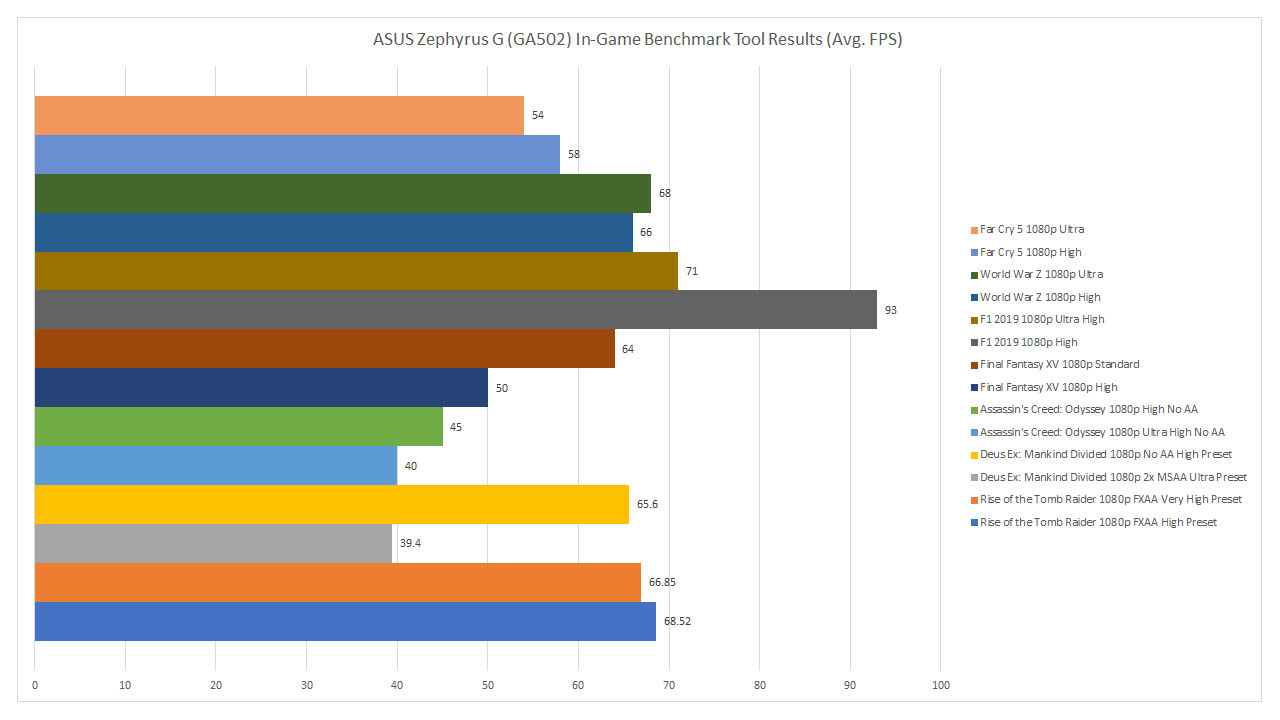 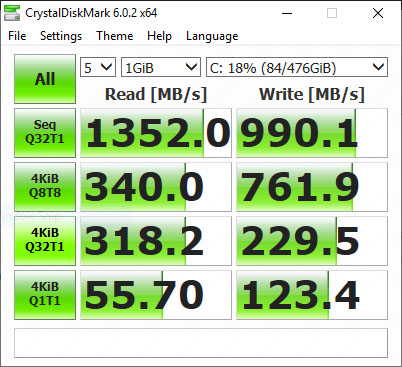 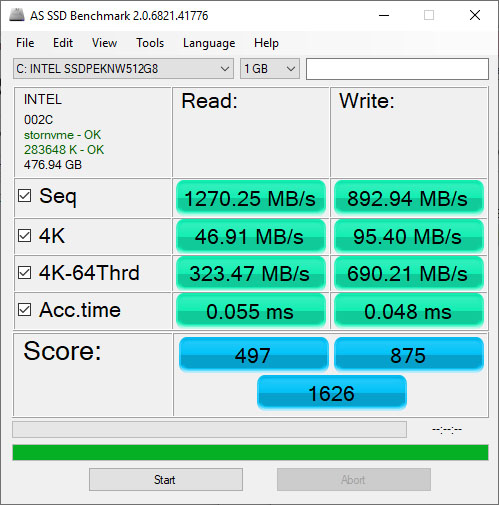 Our synthetic benchmarks were quite a mixed bag, with the GA502’s Ryzen 7-3750H performing well in most of the tests except for, surprisingly, Cinebench’s R15 Multi-Core test and the PCMark 10 Digital Content Creation test. As for the GTX 1660 Ti, it performed mostly as expected, with a slightly lower 3DMark score than its desktop counterpart due to its lower clocks and power. Lastly, the SSD on the GA502 is one of the fastest we’ve tested so far.

When it comes to gaming, the GA502 was largely capable of handling all the games we threw at it. Most of the titles we tested on it ran at around 60 fps, with only a few titles failing to reach that mark either outright or when graphical settings were increased. So it wouldn’t be a surprise if the Zephyrus G was able to reach 60 fps in most AAA titles at either medium or high settings. All three esports titles we tested also performed very well on the GA502.

Overall, the ROG Zephyrus G GA502 is largely impressive when you consider its design, performance, battery life, and price tag. While it does compromise on its display to be able to provide a 120Hz panel at this price point, it makes up for it with everything else it offers such as its superb build quality, decent keyboard, loud speakers, and more. Those looking for a thin and light gaming laptop that’s capable of running most games at a decent graphical quality or framerate while also having the option to use it for more general tasks without worrying much about its battery should definitely consider the GA502.