We’re well into the life of NVIDIA’s 1000-series graphics cards and ASUS has released most, if not all, of their variants of each of the series’ currently available models. One of those is the company’s ROG Strix variant of the GeForce GTX 1070. If we follow NVIDIA’s naming conventions, the GTX 1070 should be the successor of last generation’s GTX 970 but with NVIDIA’s improvements to the card with its new Pascal architecture and  performance, and consequentially, its price is closer to that of last generation’s GTX 980 Ti and 980, respectively, at a price bracket of around Php26,000-28,000. We take a look at the ASUS ROG Strix GTX 1070 and see just how well it performs.

The ROG Strix GeForce GTX 1070 features a starkly different design than last generation’s Strix series cards. ASUS has gone away with the owl motif and red and black color scheme for its custom cooler and replaced them with a new triple-fan design that they’ve ostensibly decided to use for all their 1000-series cards under the ROG Strix line including the high-end GTX 1080 and the mid-range GTX 1060. The new design is edgier and more angular with slits for the card’s RGB lighting, which seems to have become standard in cards in this generation. The backplate features a more solid look with less vents than last generation’s cards and features white line art as well as a large illuminated ROG logo.

The fans themselves feature what ASUS is calling a triple wing-blade design and, much like other coolers on this and even last generation’s cards, switch off at low load. Under the shroud and fans is the dual heatsink assembly with heatpipes that directly make contact with the GPU die which, according to ASUS, provides better heat dissipation than reference cooler designs. To complement all this, ASUS has also installed what it calls ASUS FanConnect, which are two four-pin fan headers which will allow users connect chassis fans directly to the GPU allowing them to perform in sync with the GPU’s temperature.

For the ROG Strix GeForce GTX 1070, ASUS has opted to follow reference design and use only one 8-pin power connector but instead of providing the same output options, the company has replaced one of the three DisplayPorts with a second HDMI port. This means the GTX 1070 features two HDMI 2.0 ports, two 1.4 variant DisplayPorts, and one dual-link DVI connector. The reason for the change is so that users may be able to connect a VR device like the Oculus Rift as well as an HDMI-based display at the same time. 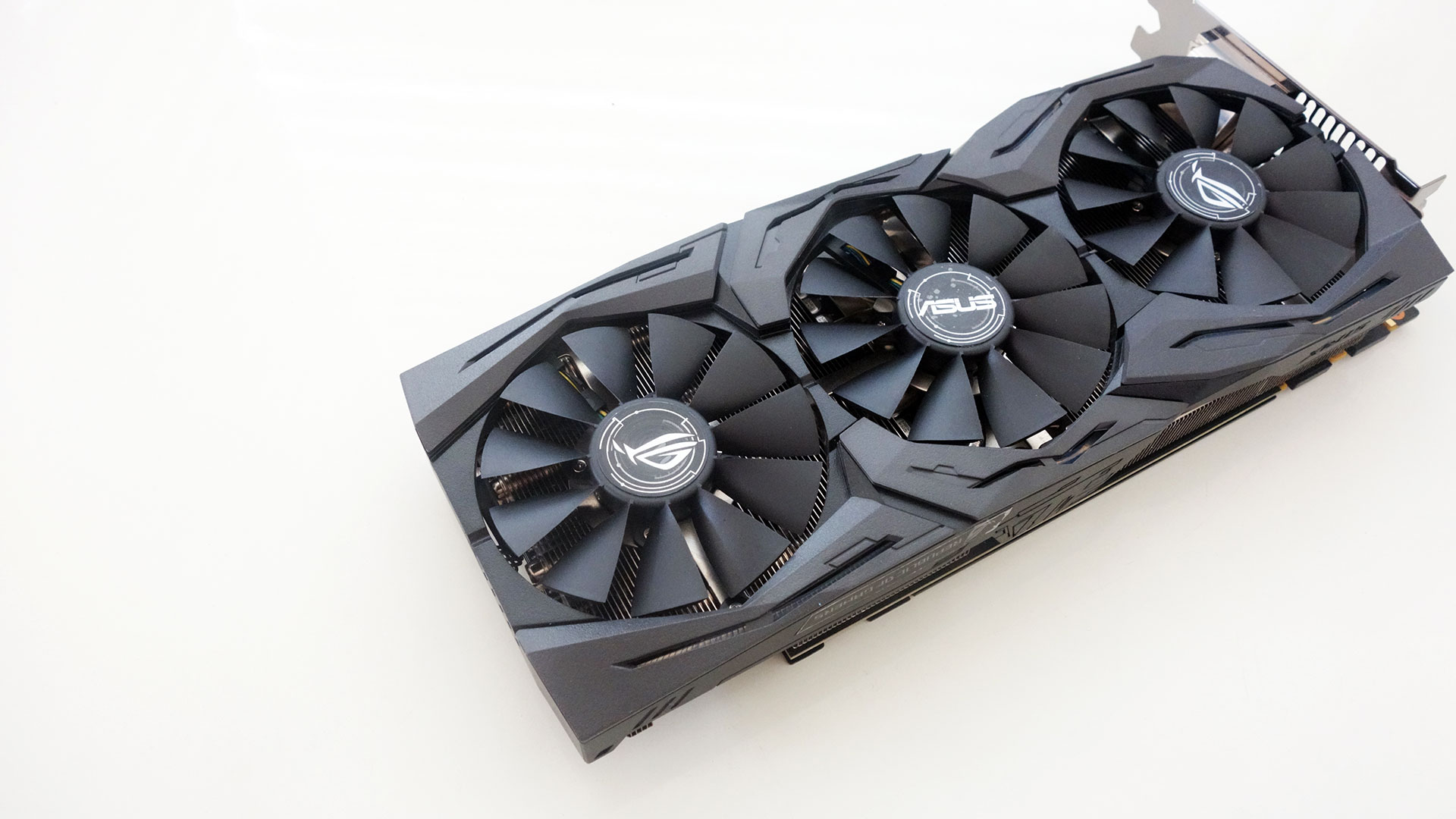 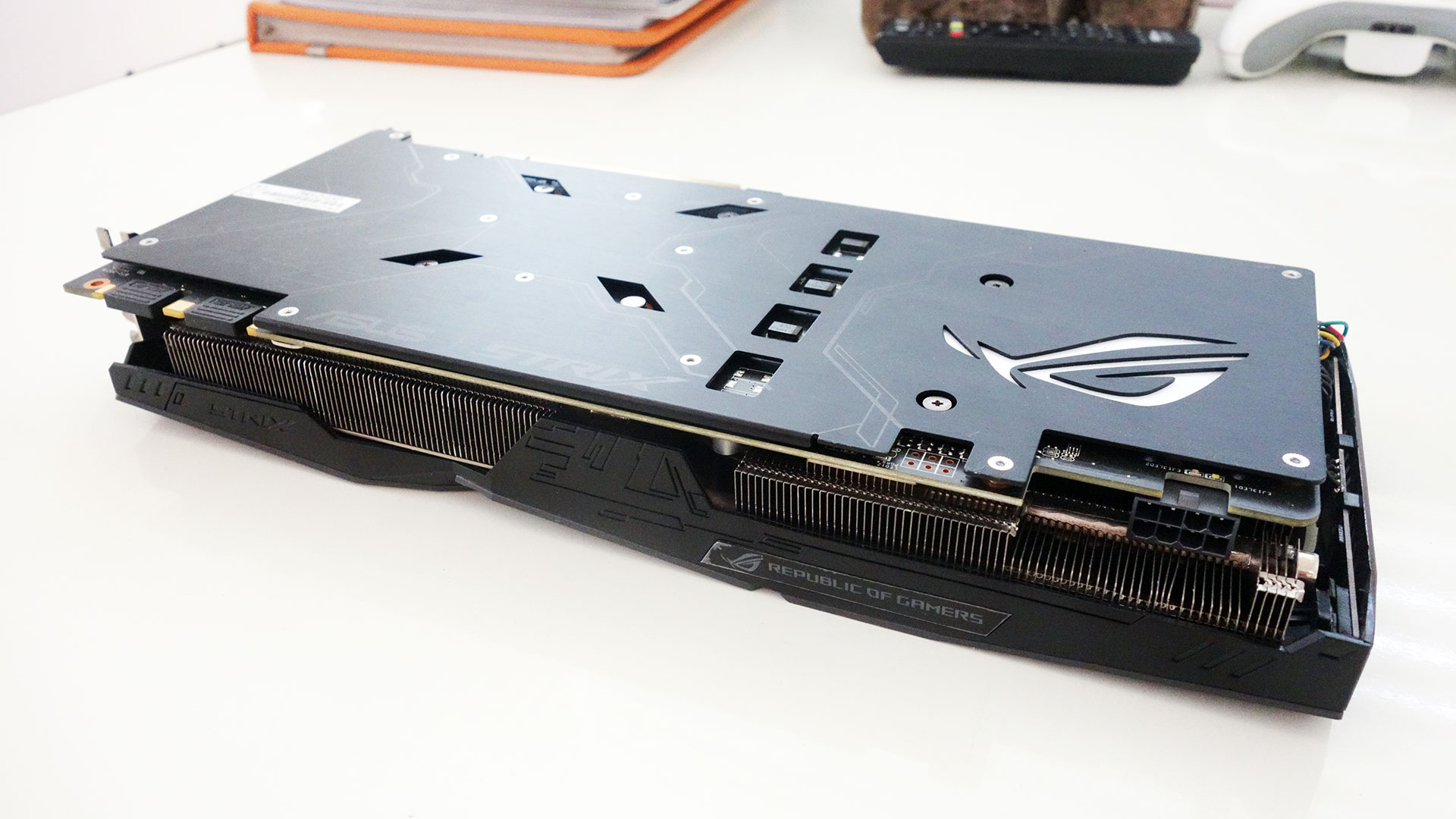 As previously mentioned, the ROG Strix GeForce GTX 1070 features RGB lighting around its cooler shroud and backplate. ASUS is calling its implementation of graphics card lighting, Aura RGB Lighting, and aside from being able to display a whole range of colors (in the millions according to the company), feature six different effects – the usual static, breathing, and strobe effects; a color cycle effect that rotates the color of the lighting between the colors of the rainbow; a music effect that pulses the light according to the beat of the currently playing music; and one that changes color depending on the GPU load/temperature.

While the lighting effects are quite fancy and make your system look a lot nicer, especially in the dark, they’re completely aesthetic and don’t add to the cards performance. But the Aura RGB lighting, especially on the logo on the backplate, is a really nice touch considering the price you’ll be paying for this card.

The Aura RGB Lighting as well as the card’s other settings can be adjusted via ASUS’s own GPU Tweak II software. The software also lets both basic and advanced users tweak the GTX 1070 either automatically or manually to increase its performance making it suitable for beginners and experienced overclockers to get a bit more performance from the card. It also comes with a Gaming Booster feature that automatically turns off Windows visual effects and services and/or free up system memory to increase your system’s overall performance. The software was pretty easy to use because of its visual UI and we found the basic options suitable enough for our needs, letting the software adjust the card’s settings for us. The Gaming Booster also worked as it should and is a good addition for those who are not familiar with adjusting Windows visual settings and services to improve performance. 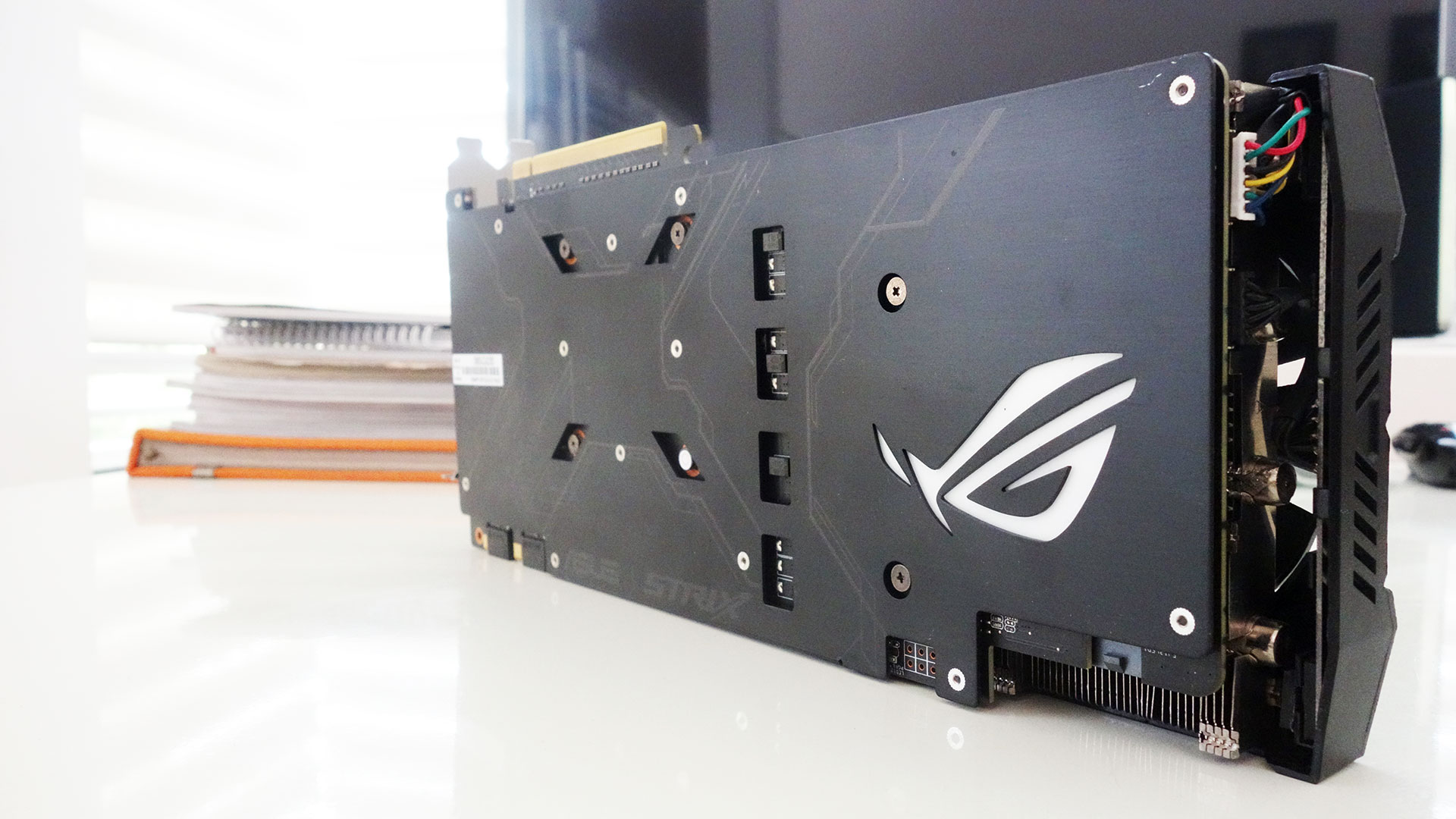 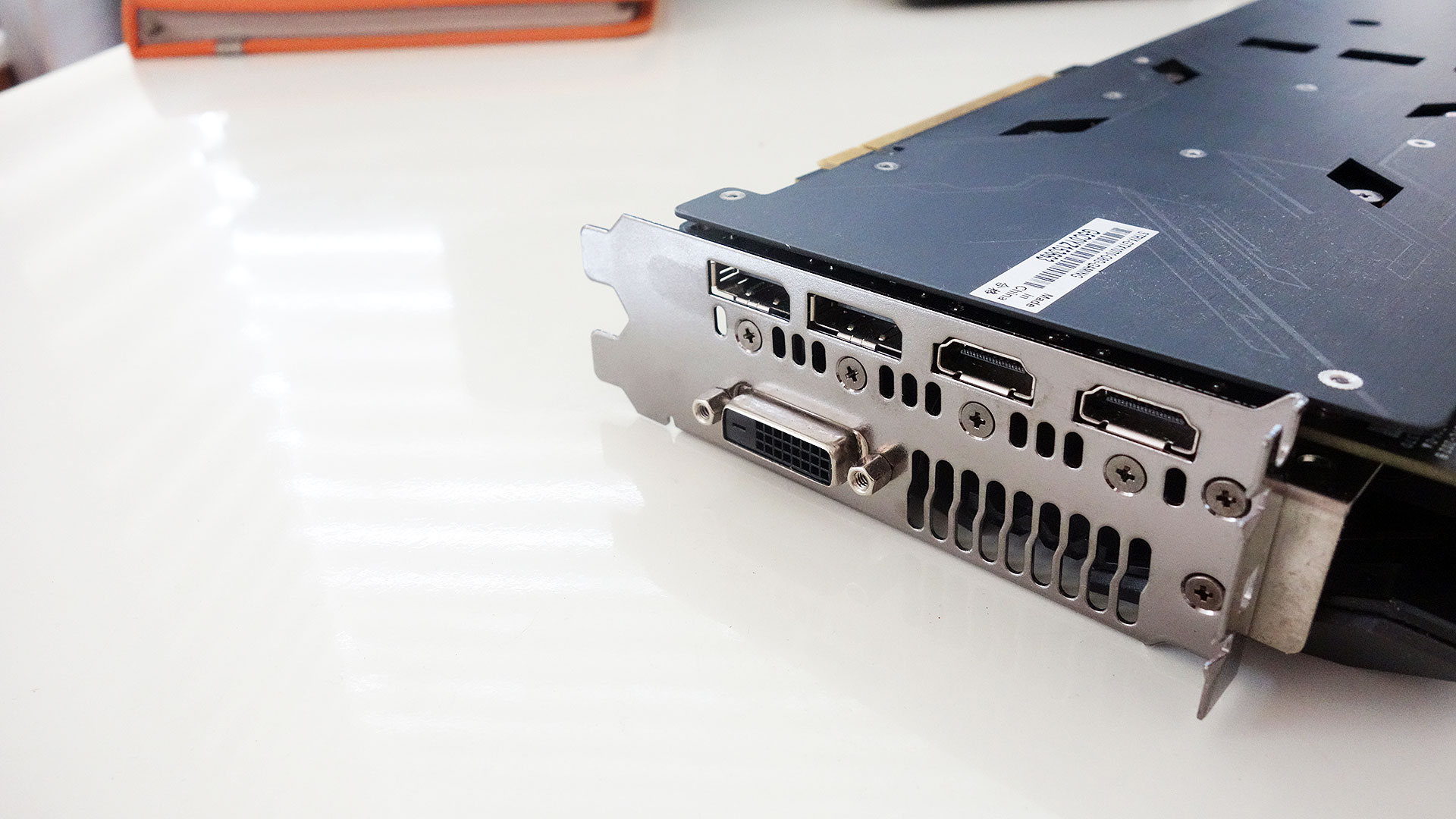 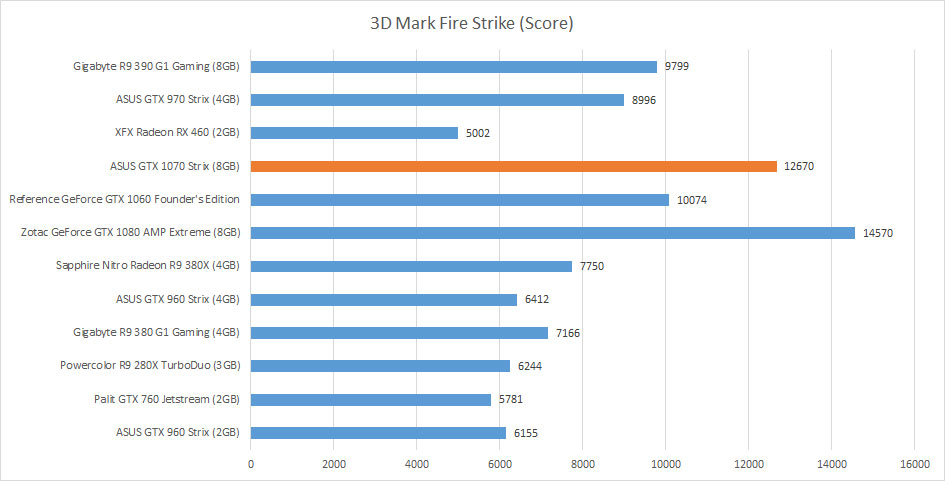 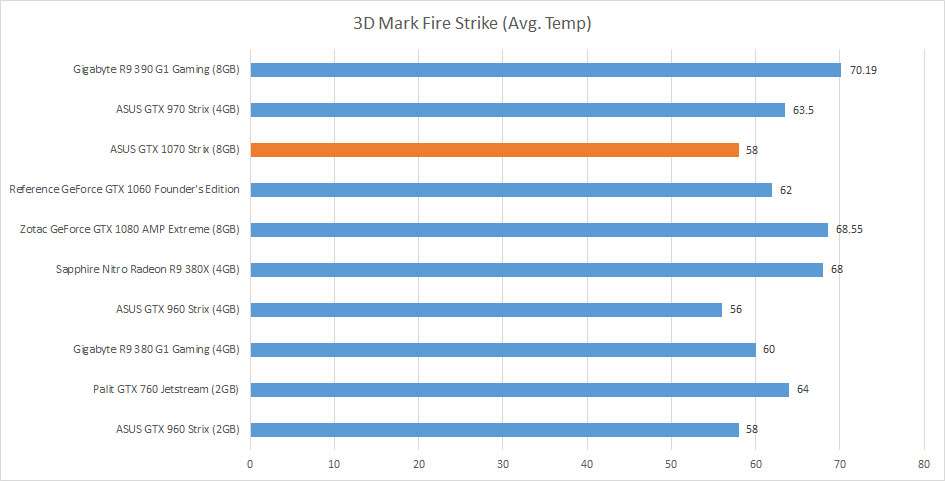 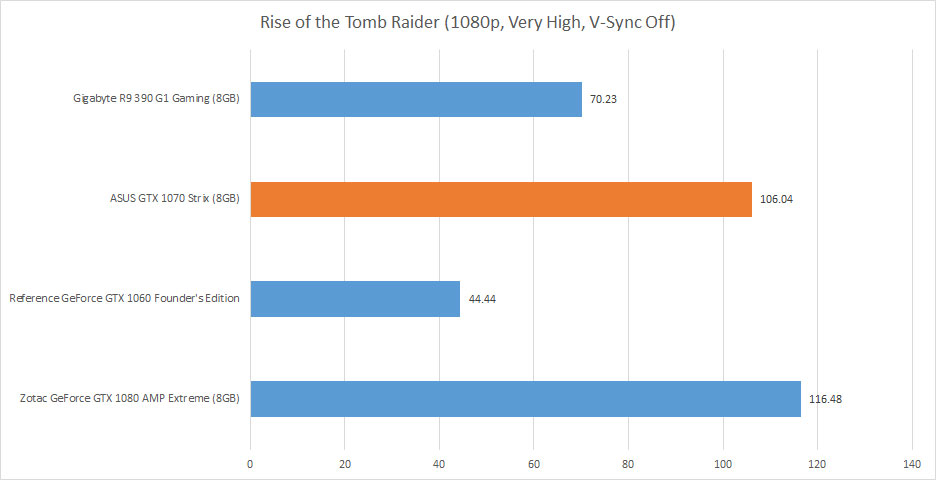 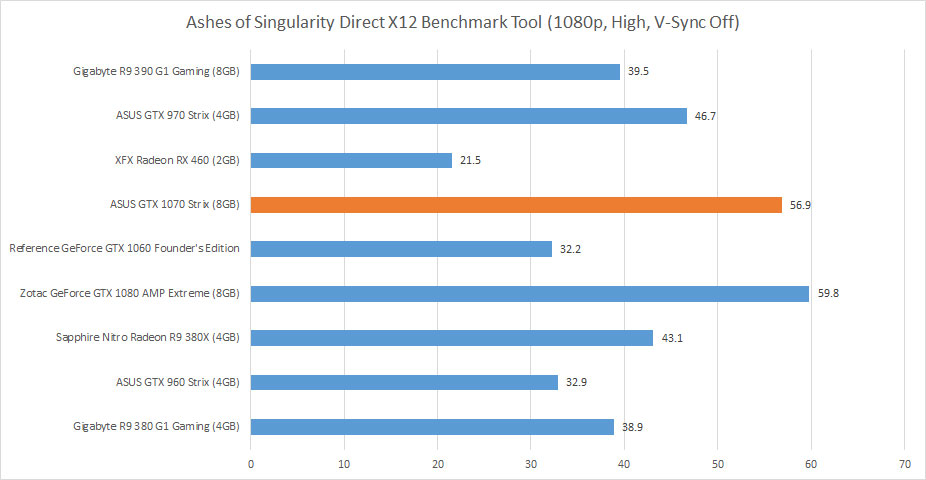 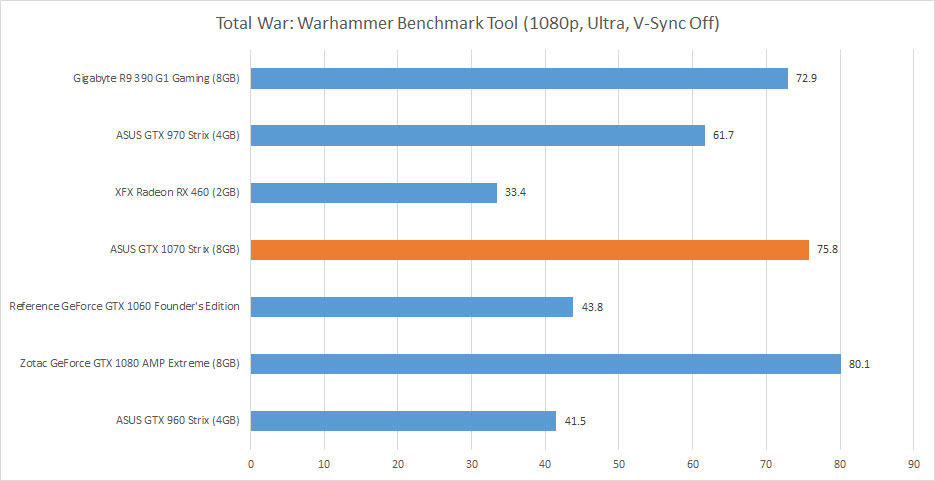 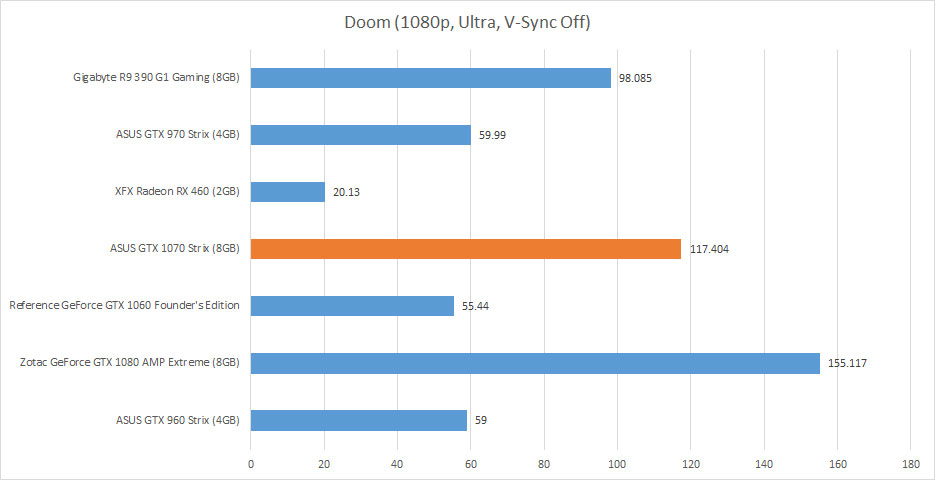 Looking at our results, the ROG Strix GeForce GTX 1070 was able to achieve an impressive 3DMark Fire Strike score of over 12,000 which is almost or more than 3,000 points higher than its supposed last-generation counterparts, the GTX 970 and the R9 390. The GTX 1070 was also impressively one of the coolest cards we’ve gotten our hands on, reaching only an average temperature of 58 degrees, showing just how well ASUS’s DirectCU III cooler performs.

Overall, the ROG Strix GeForce GTX 1070 is an amazing card for its price. It performed impressively and exceeded our expectations and ASUS’s ROG Strix iteration of the card with its DirectCU III cooler is undoubtedly a great choice. While it is significantly more expensive than its supposed predecessor, the GTX 970, the performance gains from the last generation of cards to this generation are immense, making the price well worth it, if you can afford the extra cost. Those playing at 1080p will definitely have way more than enough power in their hands to play any new and upcoming games at the highest settings while those playing at 2K and above won’t be disappointed as well. It seems, like the 970, the 1070 will be our favorite card of the 1000-series and we couldn’t recommend it more.