ASUS has been on a roll when it comes to their mechanical gaming keyboards. The company released their high-end ROG Claymore mechanical gaming keyboard early last year and was met with great fanfare due to its unique design. The company also released their more affordable Cerberus Mech RGB keyboard, enabling more budget-oriented users the opportunity to own an ASUS keyboard. Earlier this year, the company once again launched a new flagship, the ROG Strix Flare, which is looking to be the best keyboard the company has released so far. 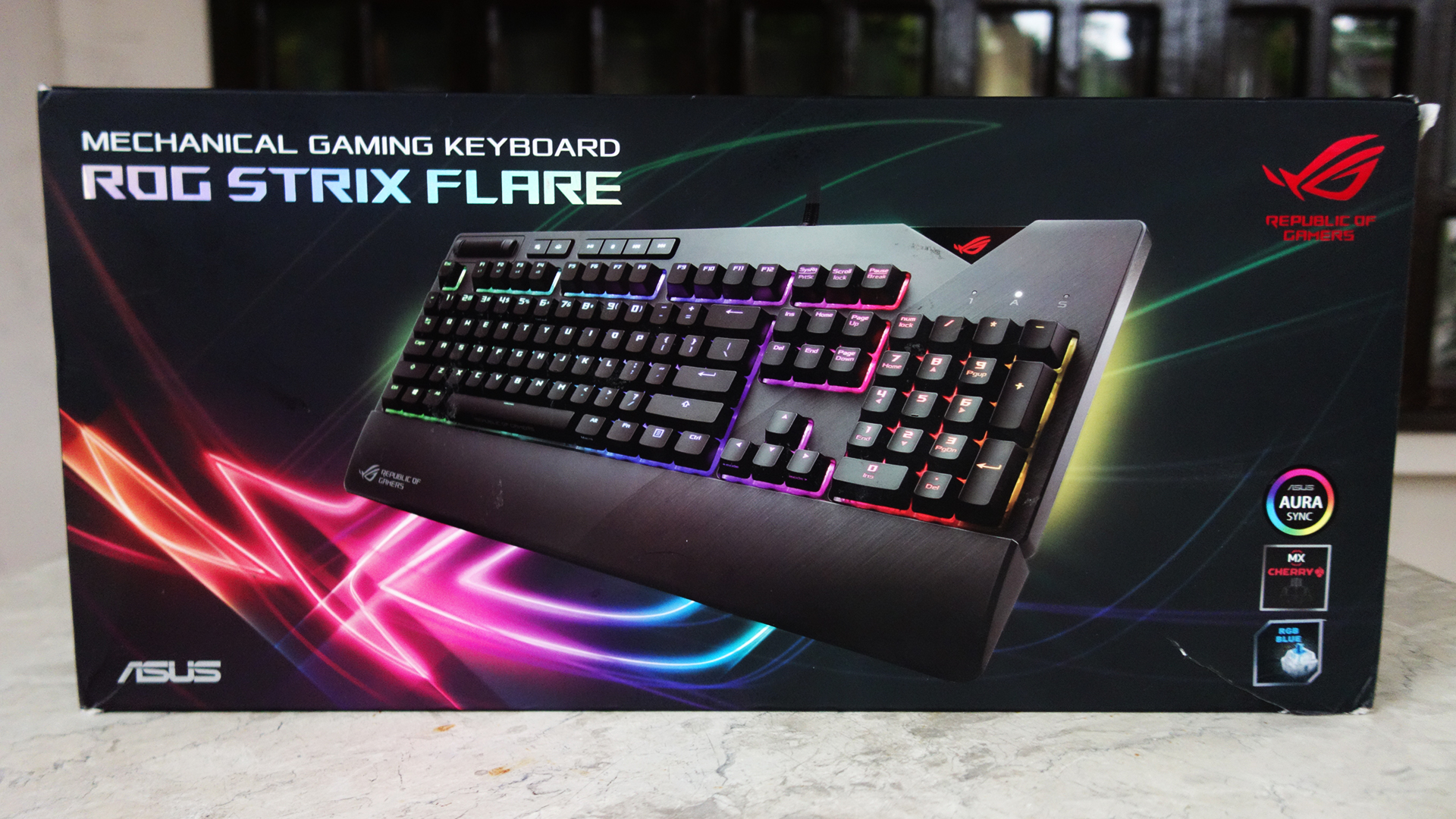 The packaging of the Strix Flare follows the same design style as the rest of products in the Strix line, with its plain black background coupled with its RGB-inspired logo that fills the front of the box with a myriad of colors. The front of the box also includes a large photo of the product coupled with shiny labeling, the ASUS and ROG logos, and several labels to indicate its compatibility with ASUS Aura Sync and the type of switch the variant is equipped with. The sides and the rear of the box is filled with more photos and/or information on the product. 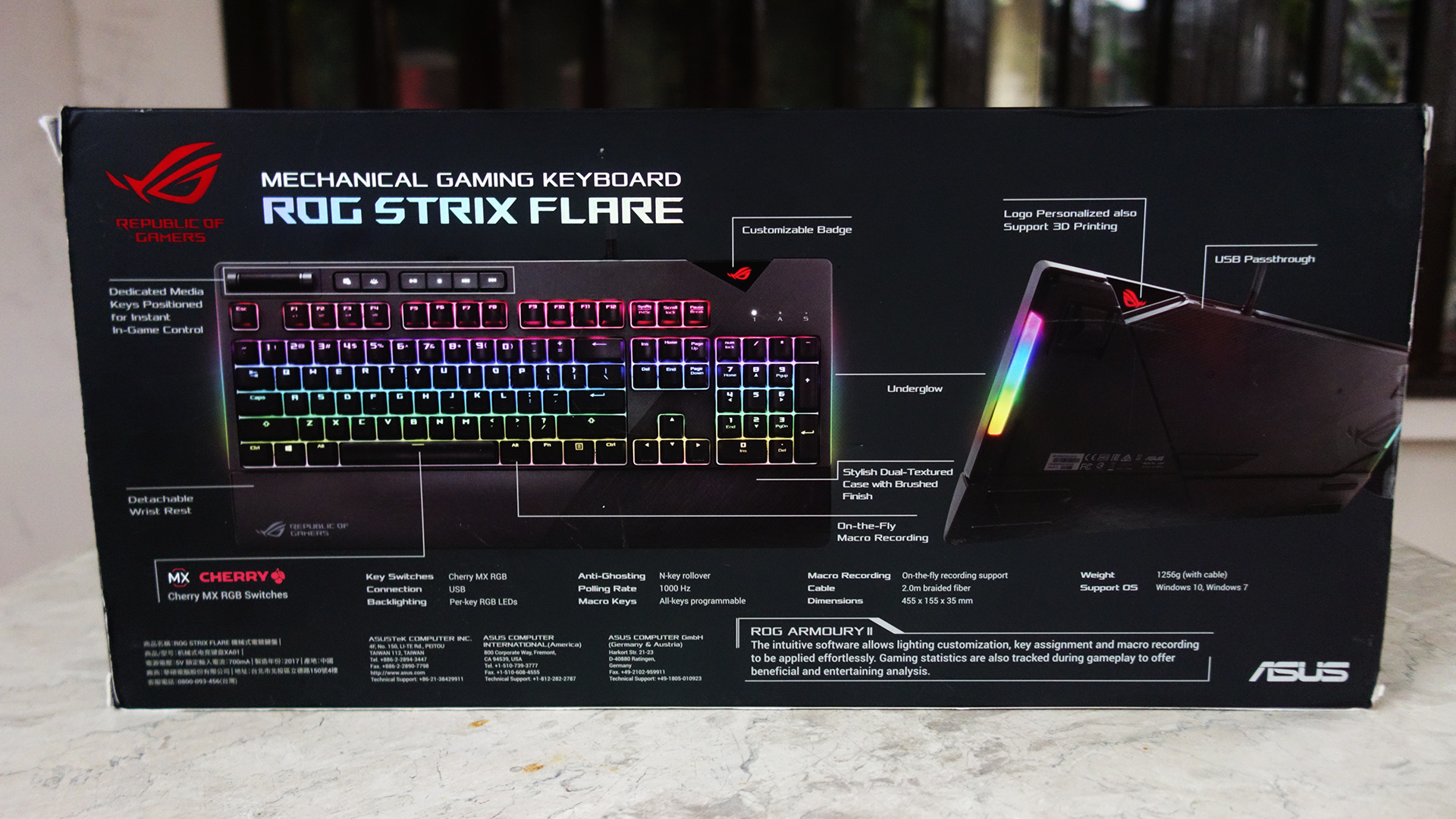 The Strix Flare features a rather simple and conventional rectangular box design with slightly rounded corners, which is a rather welcome sight. The rear and sides of the keyboard have a bit of bezel around them while the front is almost bezel-less to account for the included wrist rest. The top right has a cutout where users can insert an acrylic badge that lights up with the rest of the keyboard. While the default badge features a white ROG logo, ASUS has included an extra blank badge for users that want to draw or print a design themselves. 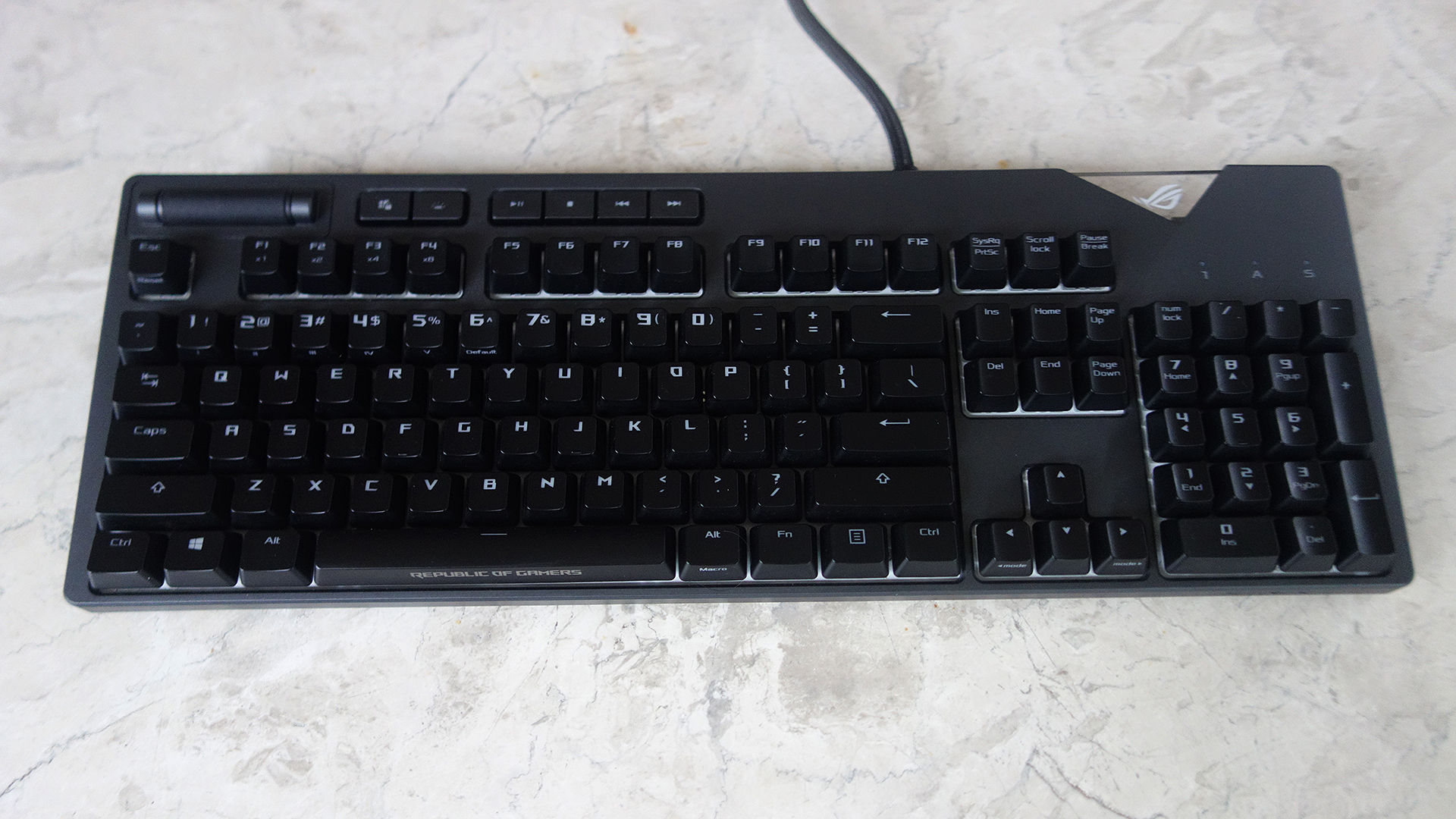 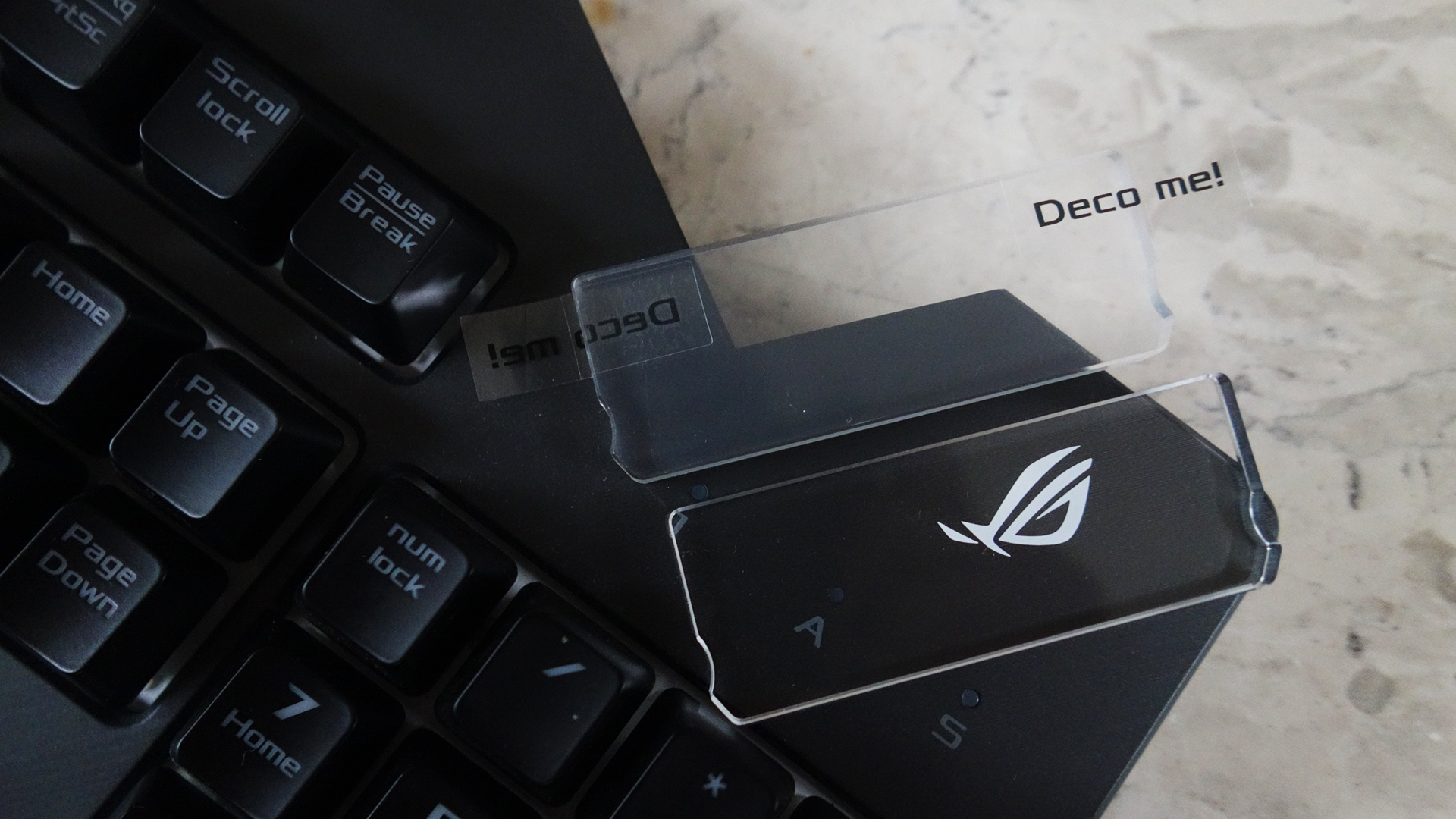 To go along with its simple shape, the keyboard features an equally simple dark grey matte surface and instead of the Mayan-inspired design that many ROG products are known for, the Strix Flare features a two-tone texture that is cut diagonally from the keyboard’s right hand side all the down to the included wrist rest. This leaves the left side of the keyboard with a smooth finish while the right side features a brushed metal look. The design breaks up the supposedly plain design of the Strix Flare quite nicely yet discreetly. 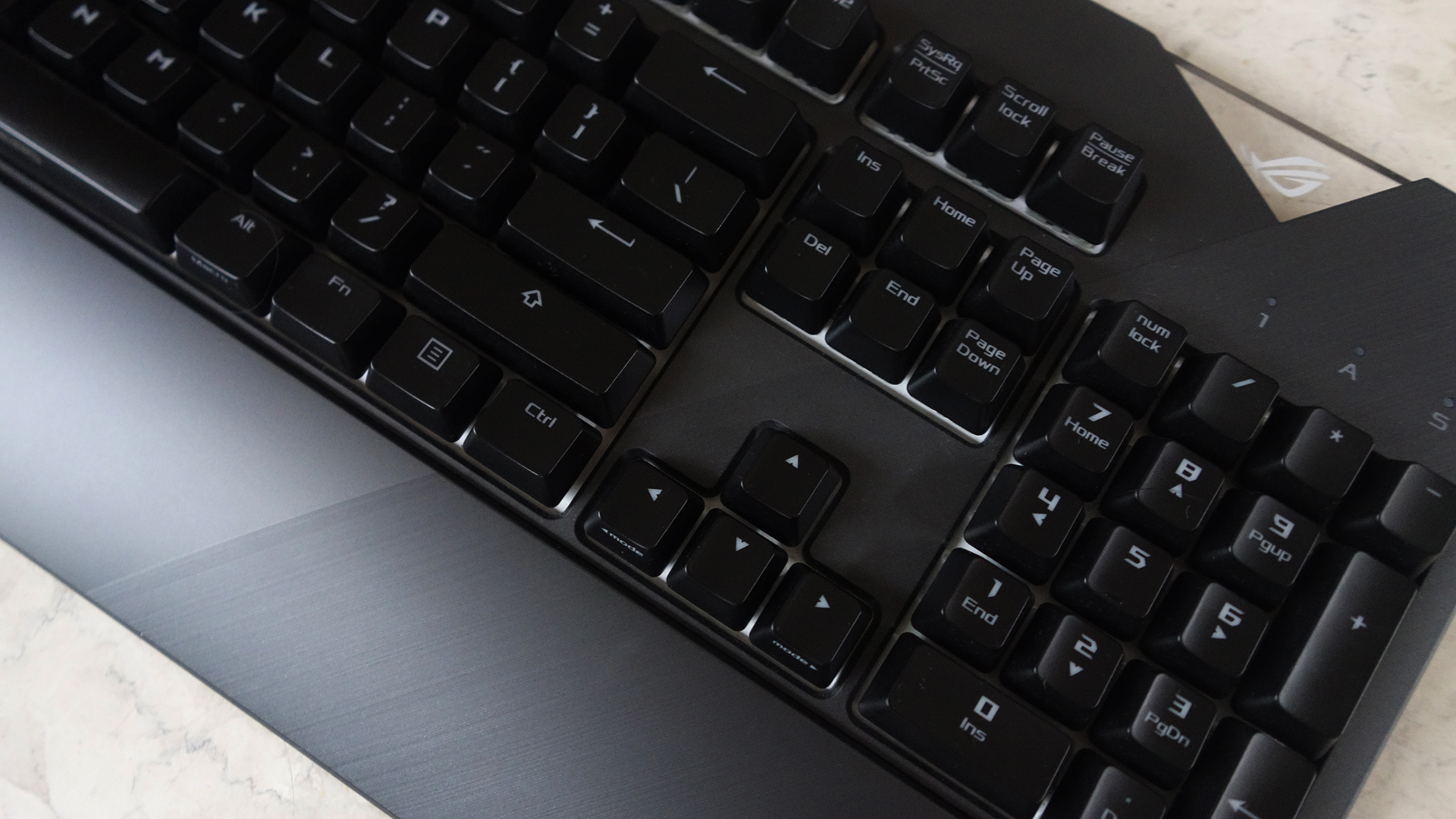 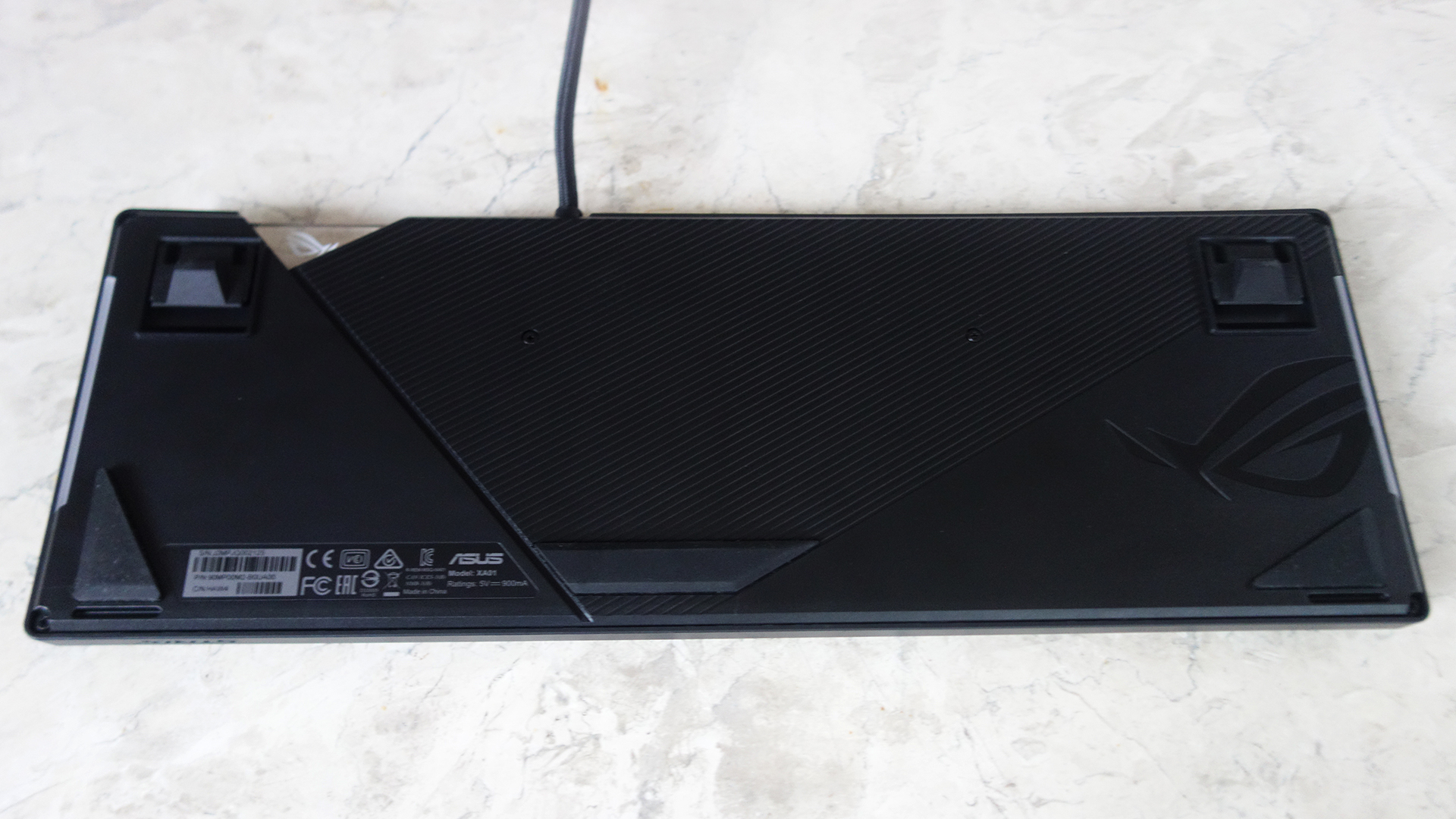 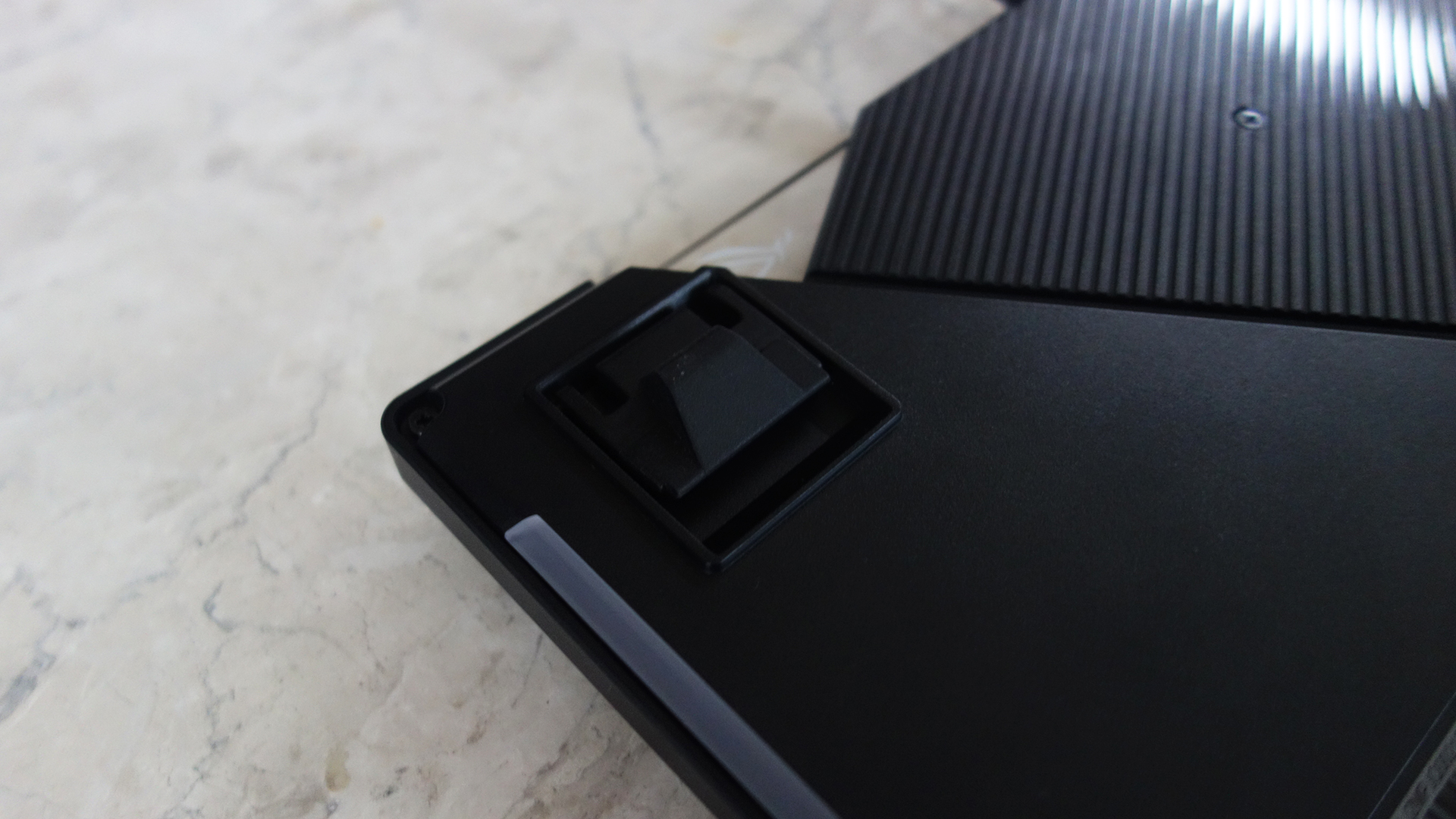 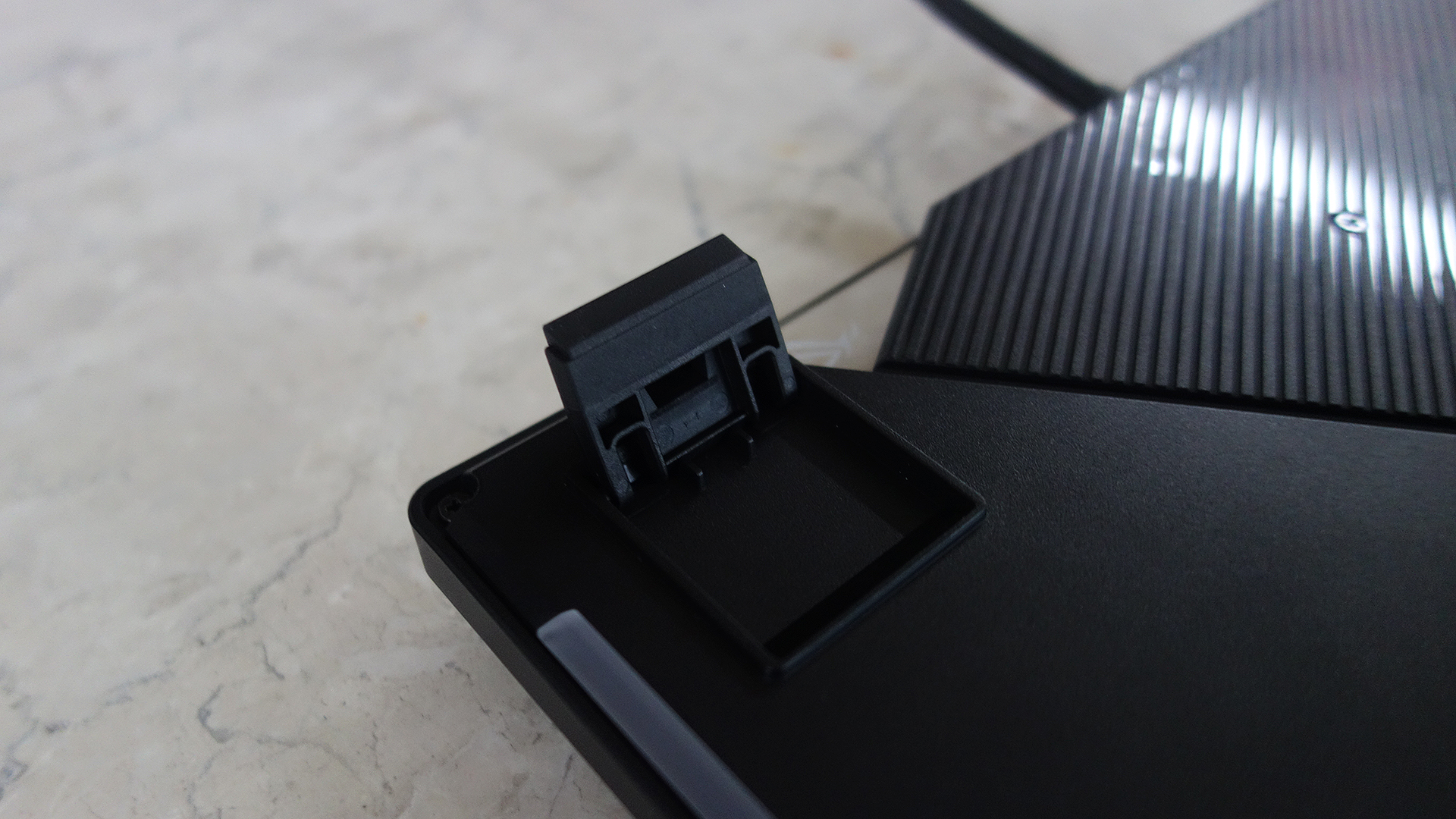 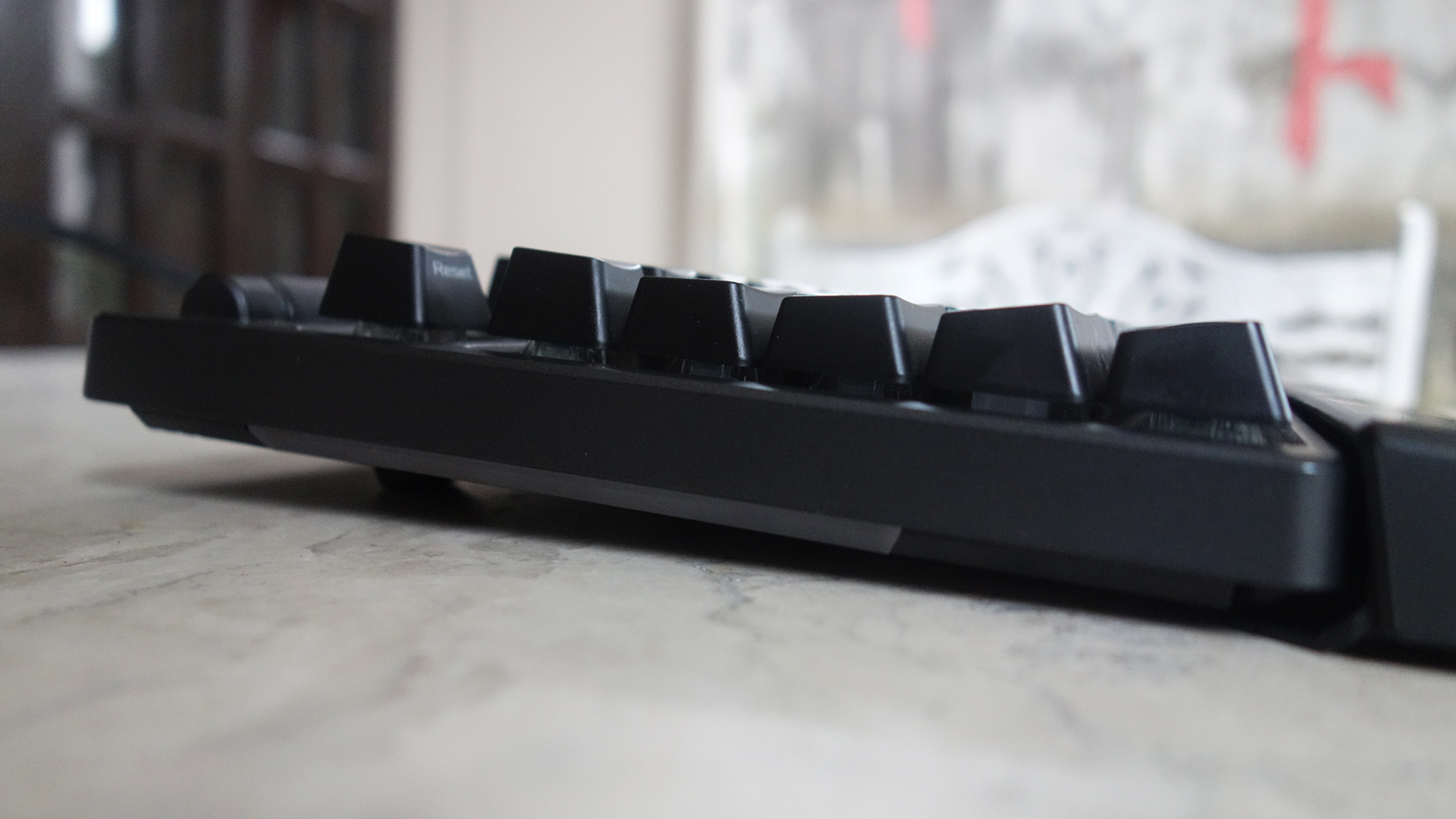 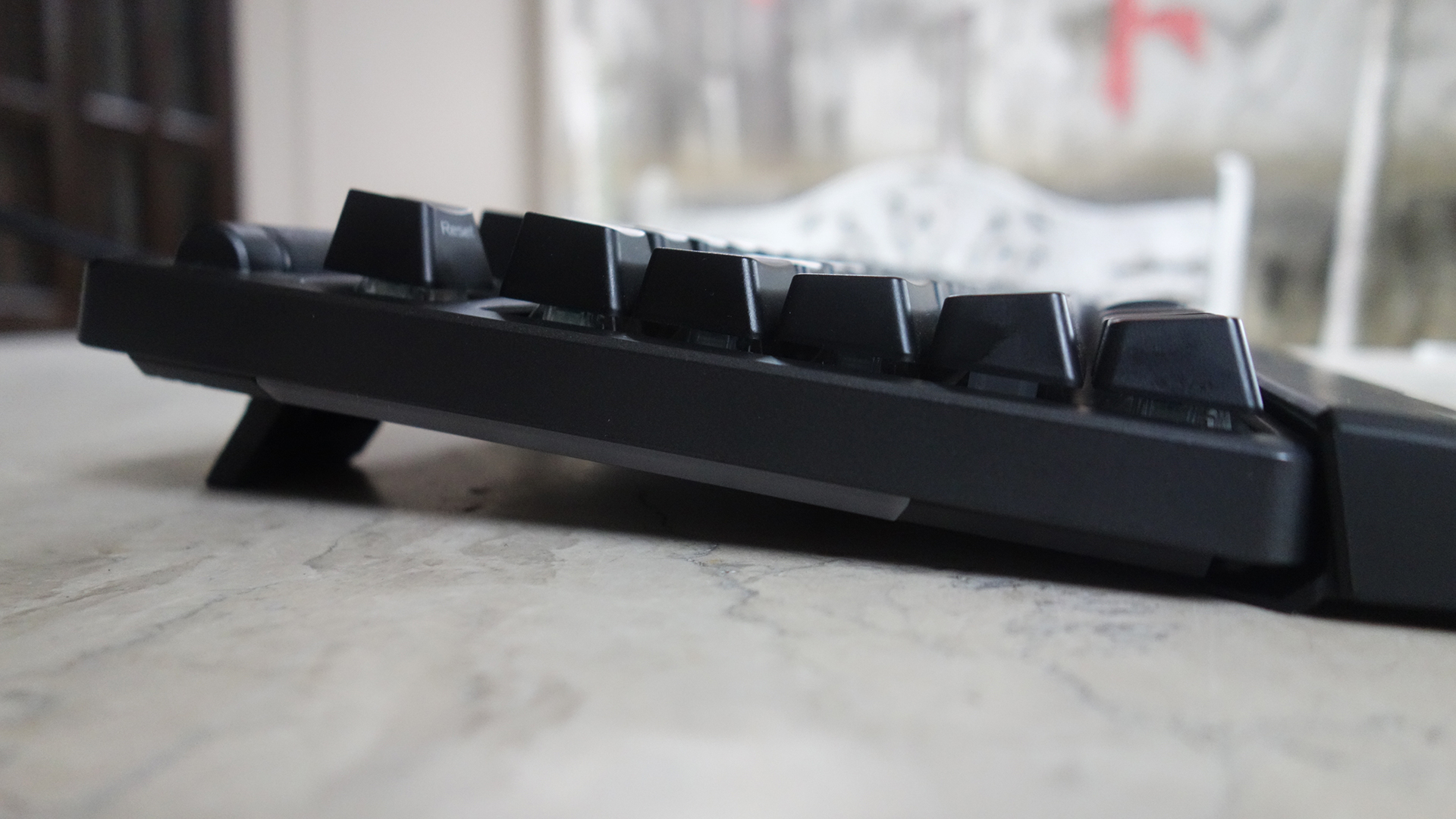 The Strix Flare’s construction mostly consists of plastic, save for its white metal baseplate, which is quite surprising for a keyboard at this price bracket, especially when cheaper keyboards have begun to offer some aluminum alloy or steel in their builds. While some metal portions, such as the top cover, would have really sold the Strix Flare, its plastic body is still pretty solid. The body feels rather sturdy with barely any flex and it’s definitely hefty for something with a plastic body, making it feel even more premium. 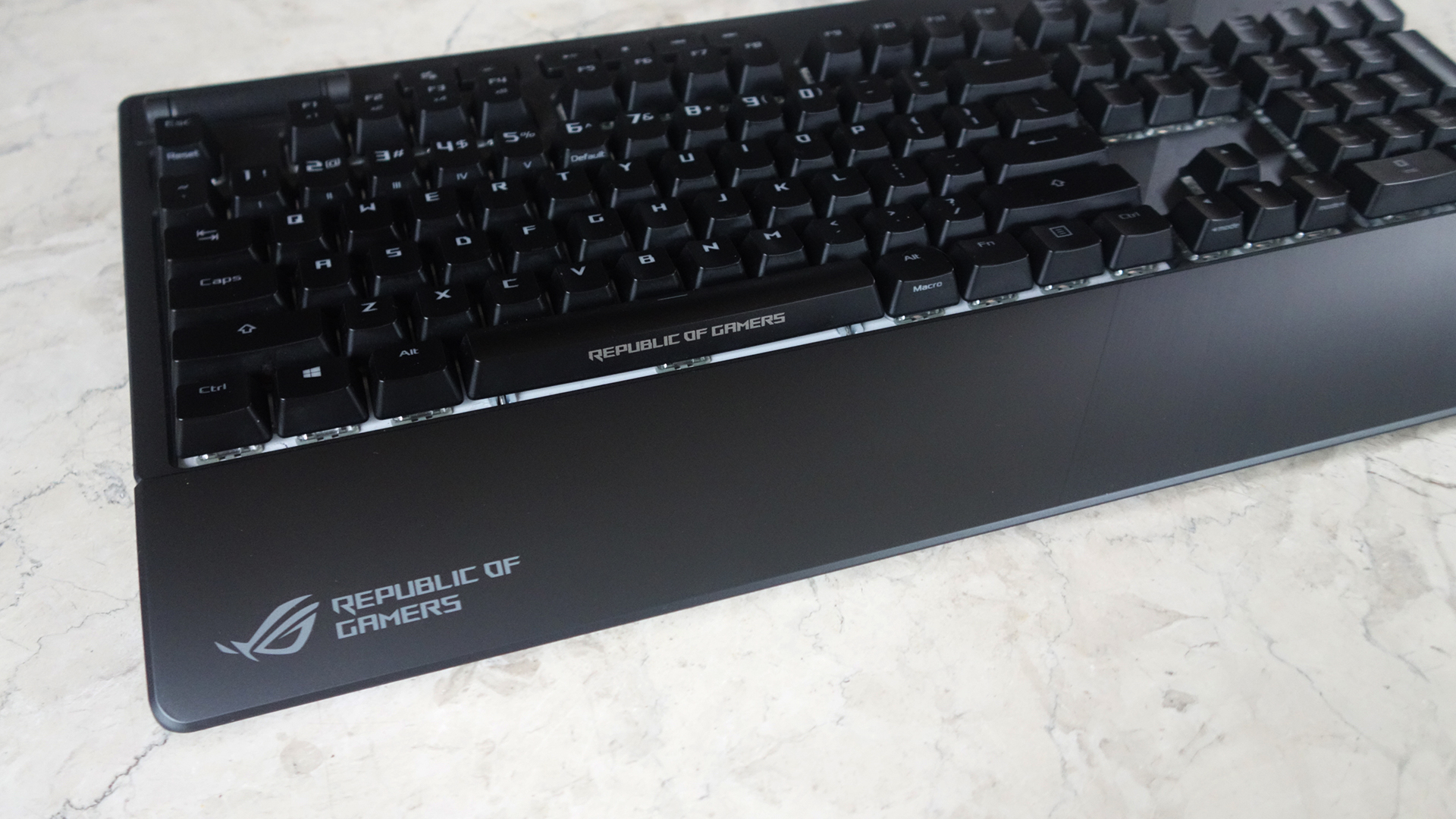 The included detachable wrist rest on the ROG Strix Flare features a soft-touch material with the same two-tone texture as the rest of the body. There’s also a Republic of Gamers logo and label on the bottom left. The wrist rest attaches to the keyboard using a couple of notches, making it easy to install and remove, and when combined with the four rubber feet on the bottom, it can stay pretty secure. While a padded wrist rest would have been greatly appreciated, the one included with the Strix Flare is still fairly usable. 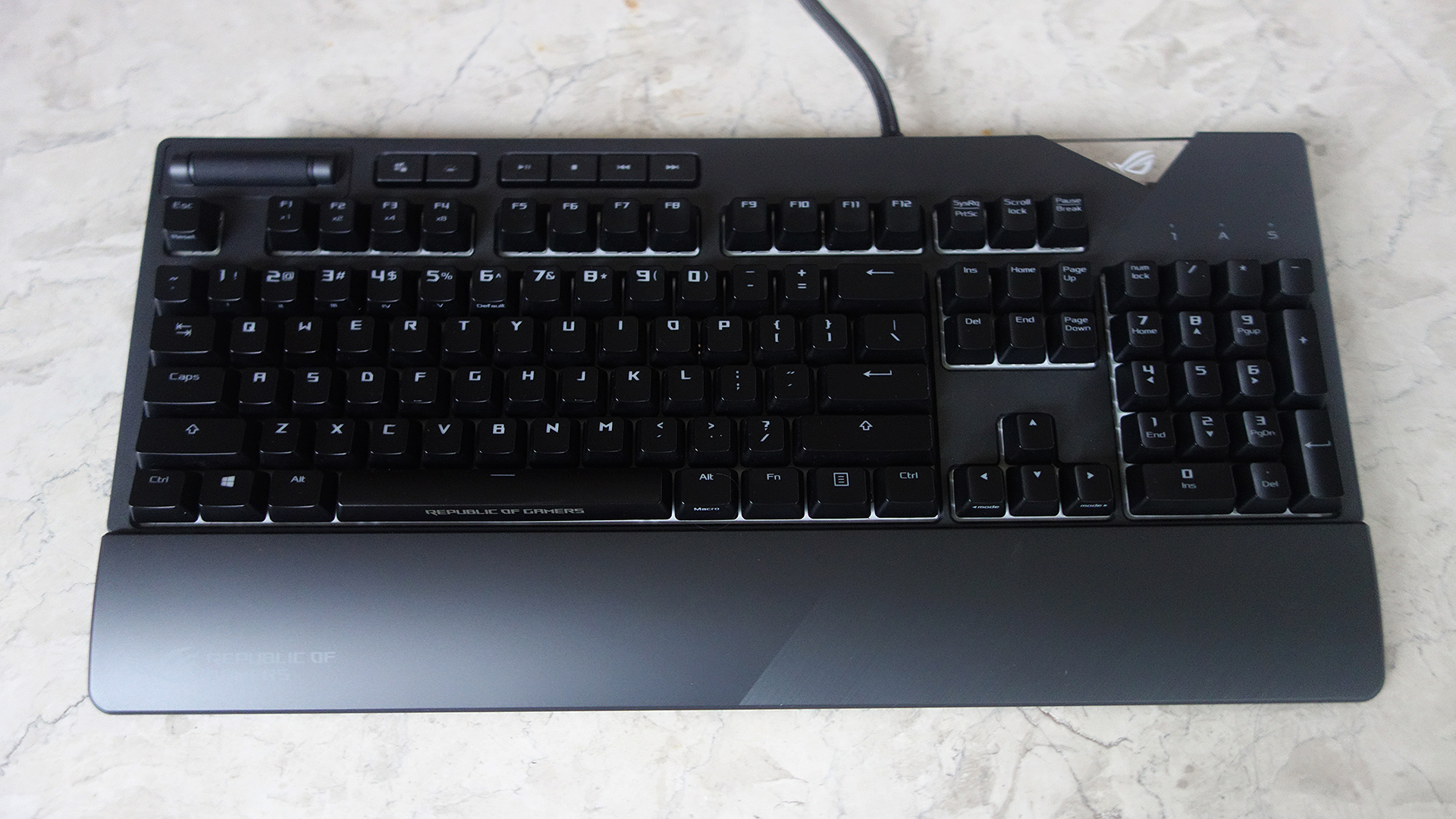 Unlike many other keyboards in the market, the media keys and volume roller of the Strix Flare are located on the left side of the keyboard. While their placement may have been initially dictated by the aforementioned cutout and badge on the keyboard’s right side, it actually looks like a better design decision. The location of the keys and roller allows users to easily access them with their left hand (for right-handed mouse users) which removes the need to take their right hand of their mouse. 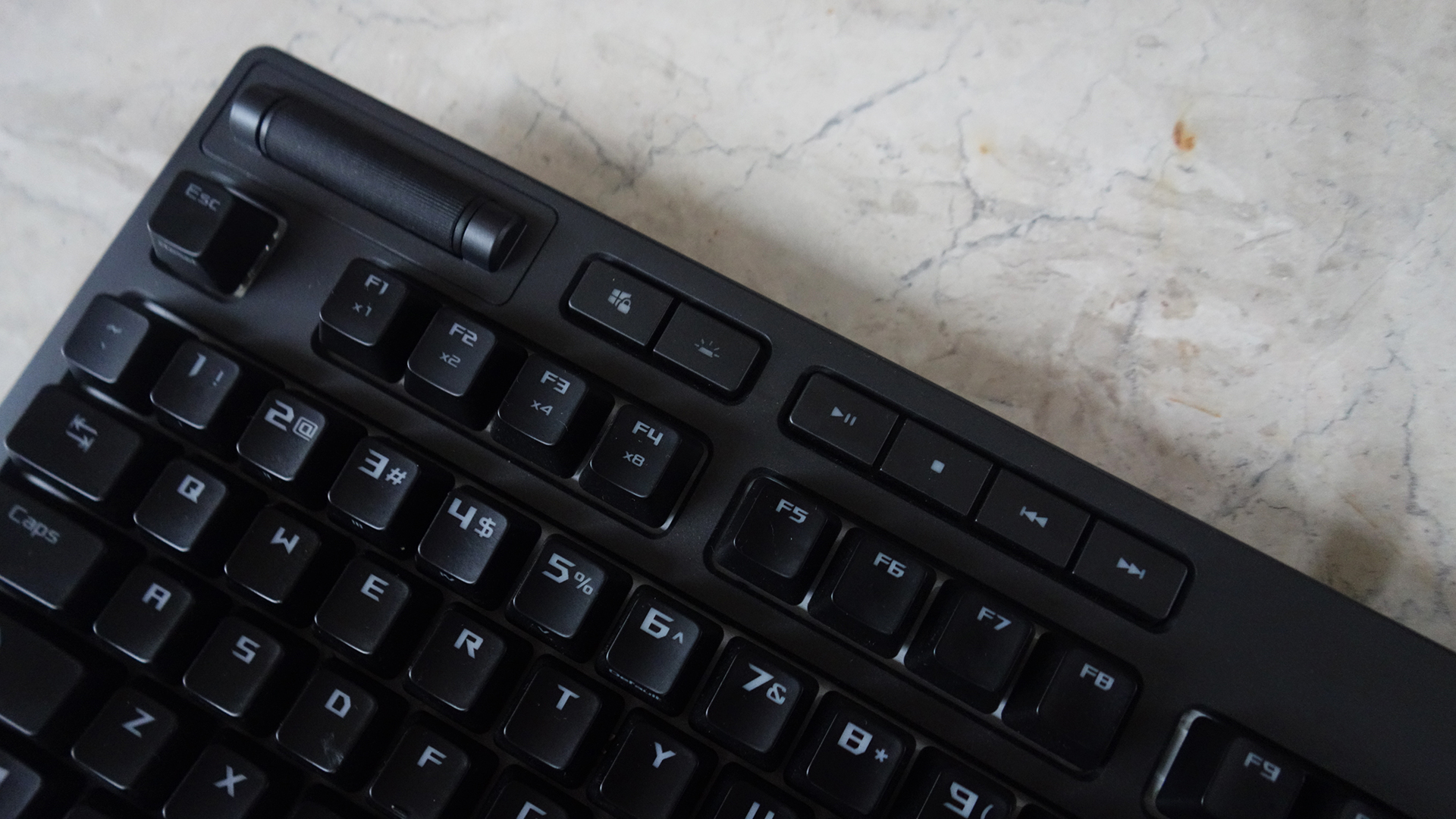 The Strix Flare comes with ABS keycaps so users should expect the matte coat of the keycaps to fade and the keycap to start looking shiner sooner rather than later. While this is slightly disappointing, it’s also pretty much expected of most mainstream mechanical keyboards. The keycap labels use the Republic of Gamers font, which makes it unique to the brand’s keyboards, and also have labels printed on the front-side of the keycaps to help users identify the keyboard’s built-in shortcuts, which is a nice touch. 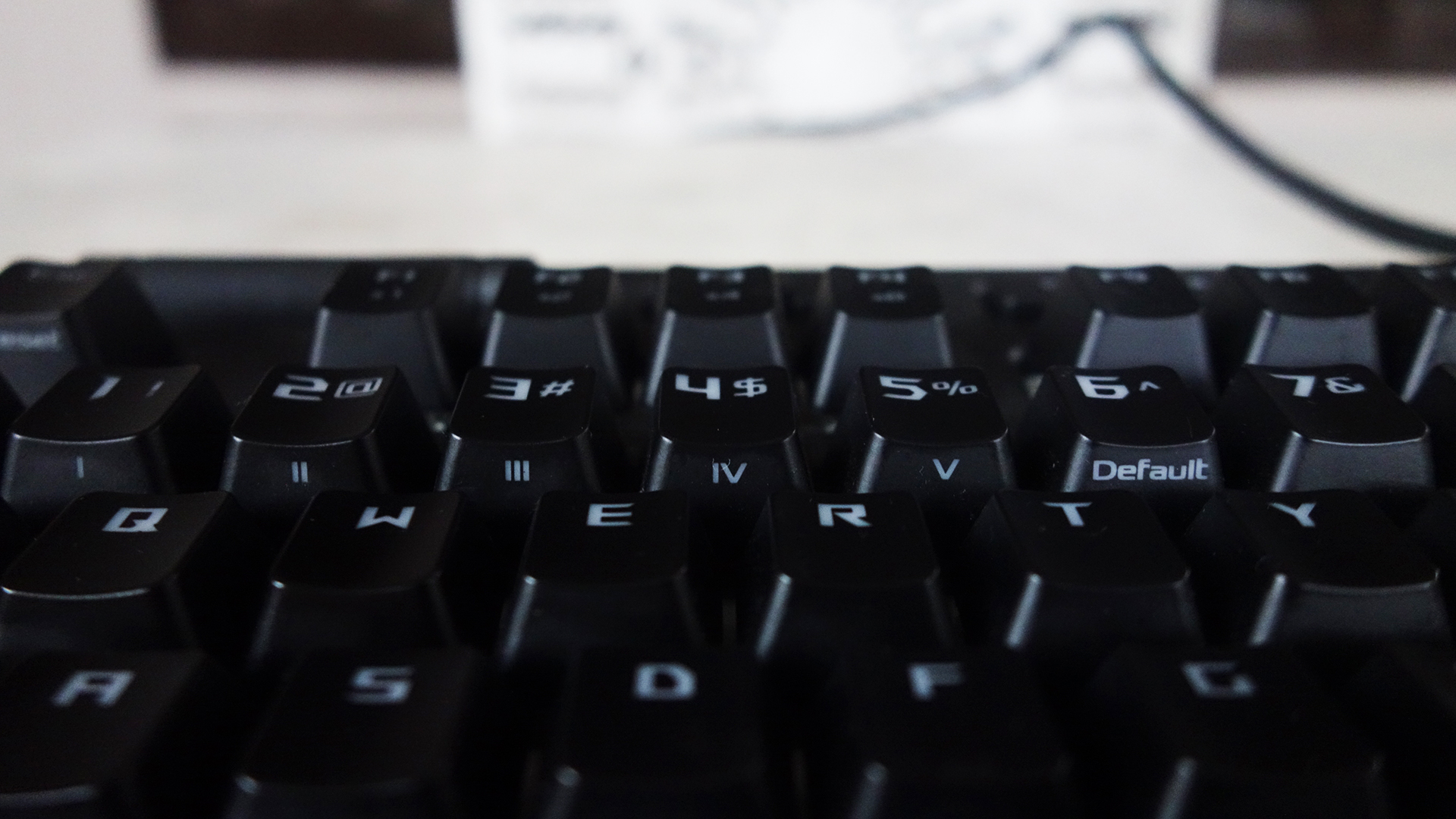 The built-in shortcuts allow users to use some of the keyboard’s features without the use of the ROG Armoury II software. Users are able to switch profiles, switch between lighting effects, customize the lighting zones, record and assign macros on-the-fly, and activate its repeat acceleration feature which automatically presses and depresses keys rapidly while the user holds it down. The on-board shortcuts and access to the Strix Flare’s features is a nice touch that let’s the keyboard be set up even without the use of software. 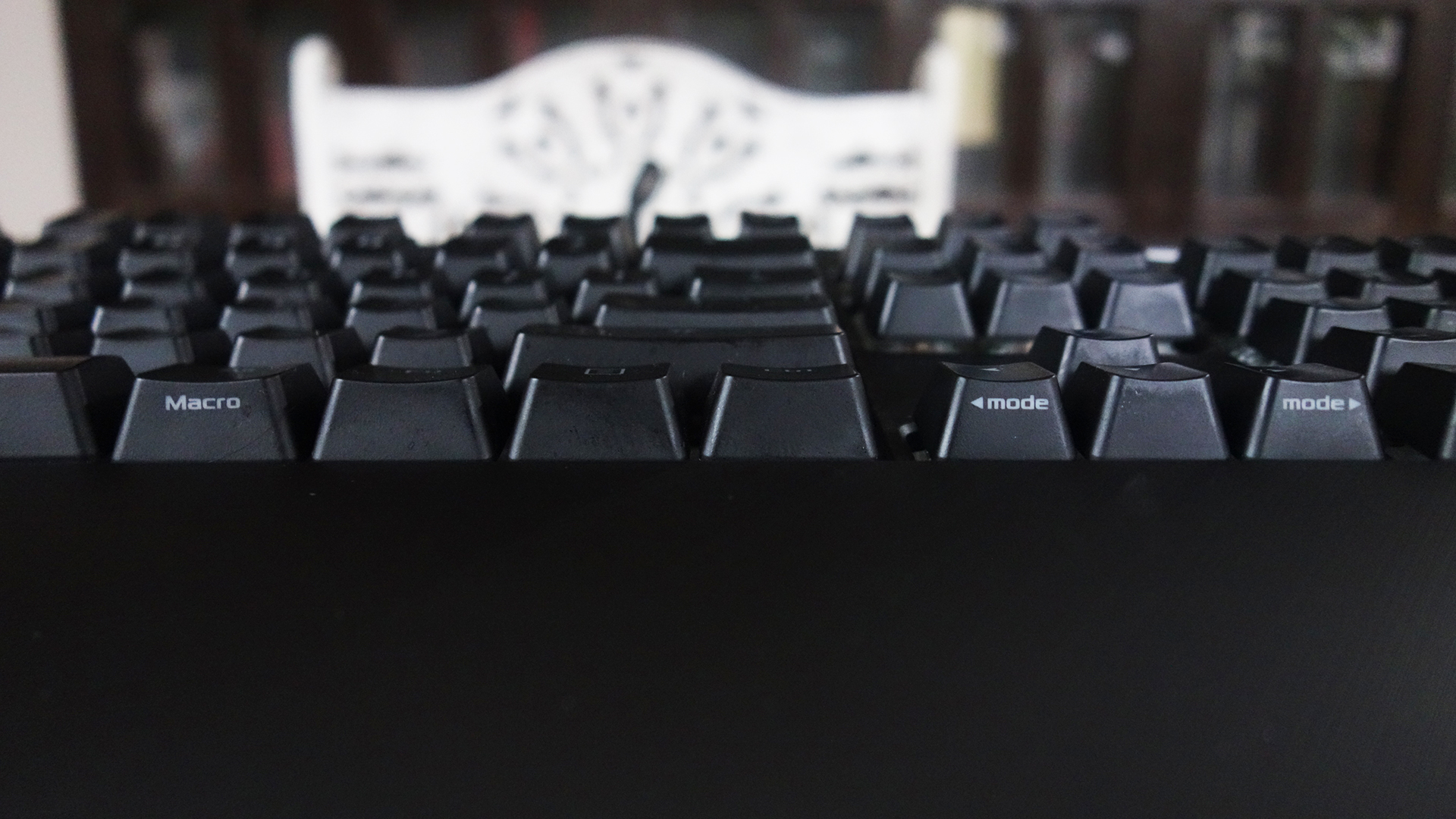 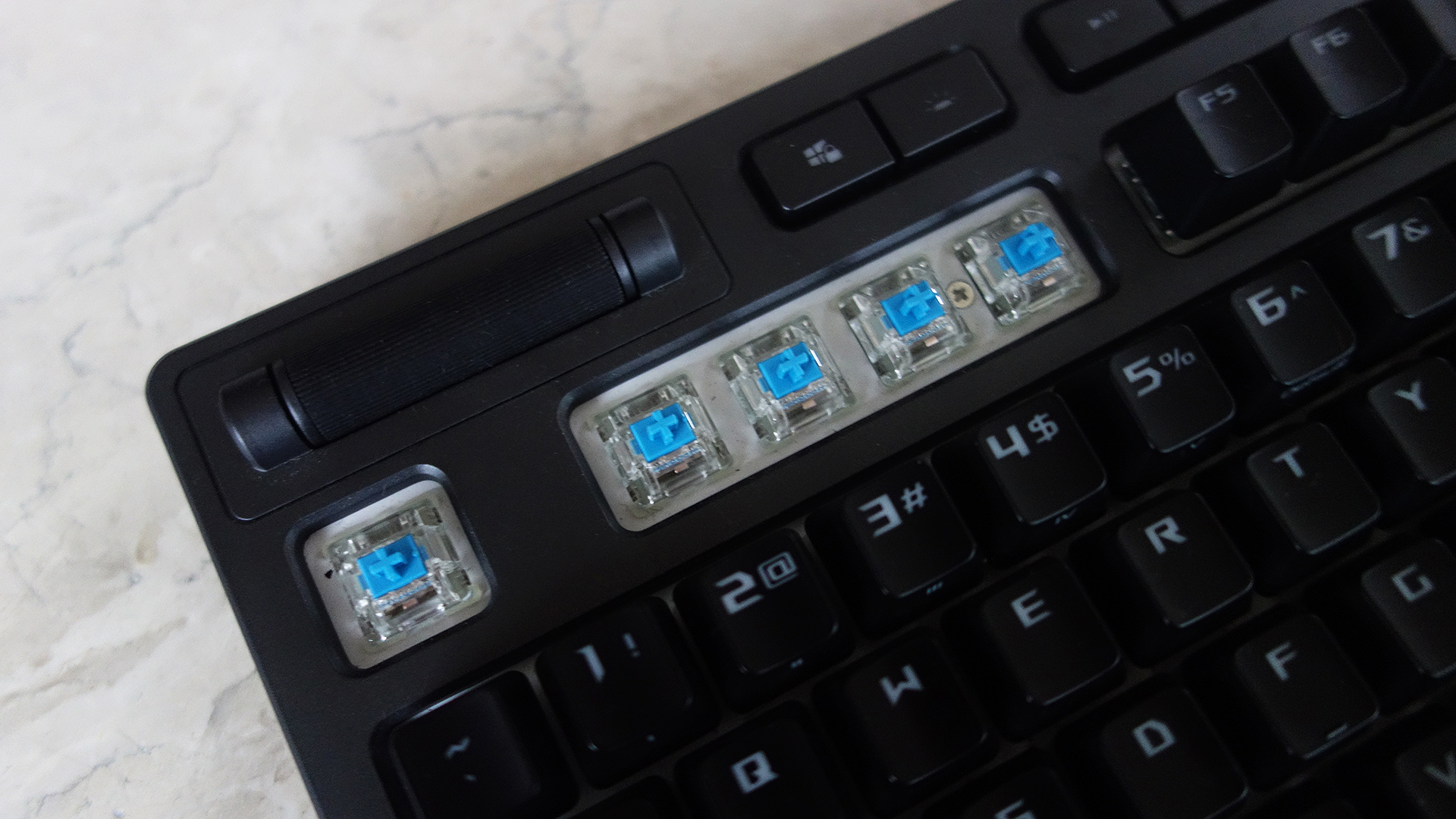 Much like many of the mechanical gaming keyboards in its price range, the Strix Flare features per-key RGB lighting that can be customized and synchronized via the company’s Aura Sync technology. The keyboard’s dark keycaps coupled with the its white base plate help the RGB lighting shine through much brighter. Surprisingly, the media keys don’t feature RGB lighting and just white backlighting instead, which is quite unusual given the amount of RGB lighting this keyboard already has. 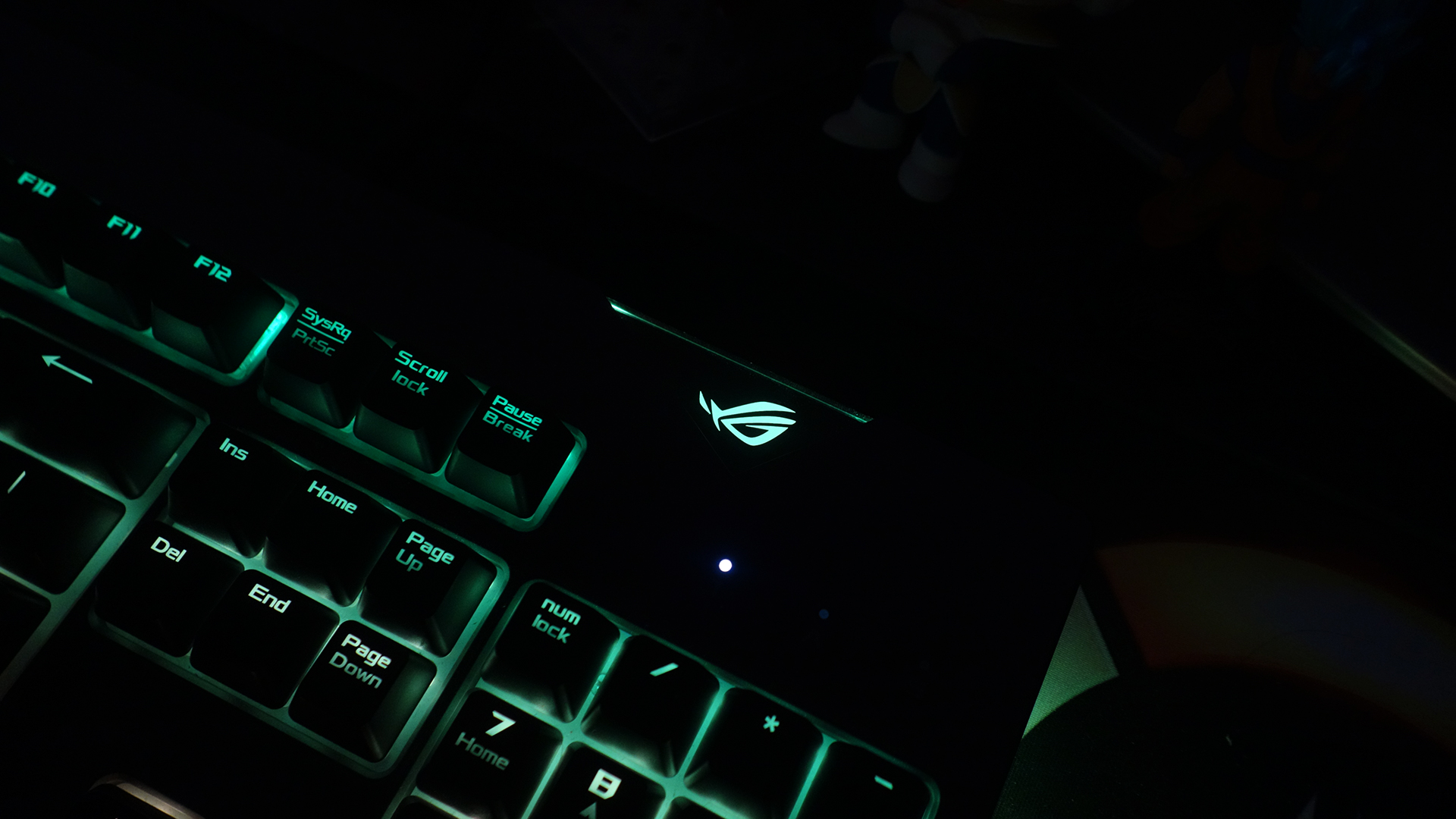 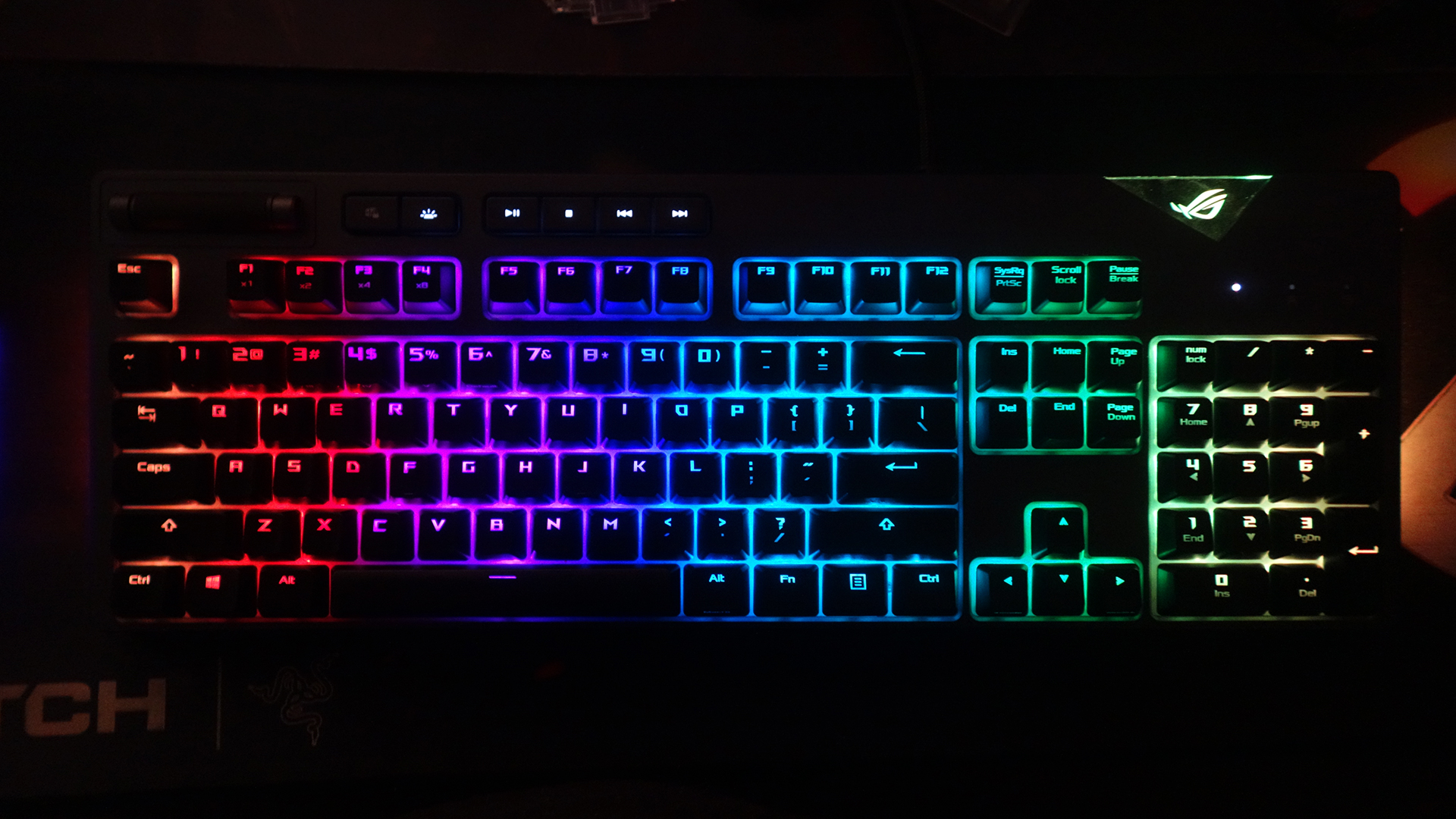 To save all its settings, the Strix Flare is equipped with onboard memory that can store up to six profiles and use them on any computer, which is a much appreciated inclusion. Five of those profiles can be customized while the sixth is the keyboard’s default profile so users can always go back to the default when needed. 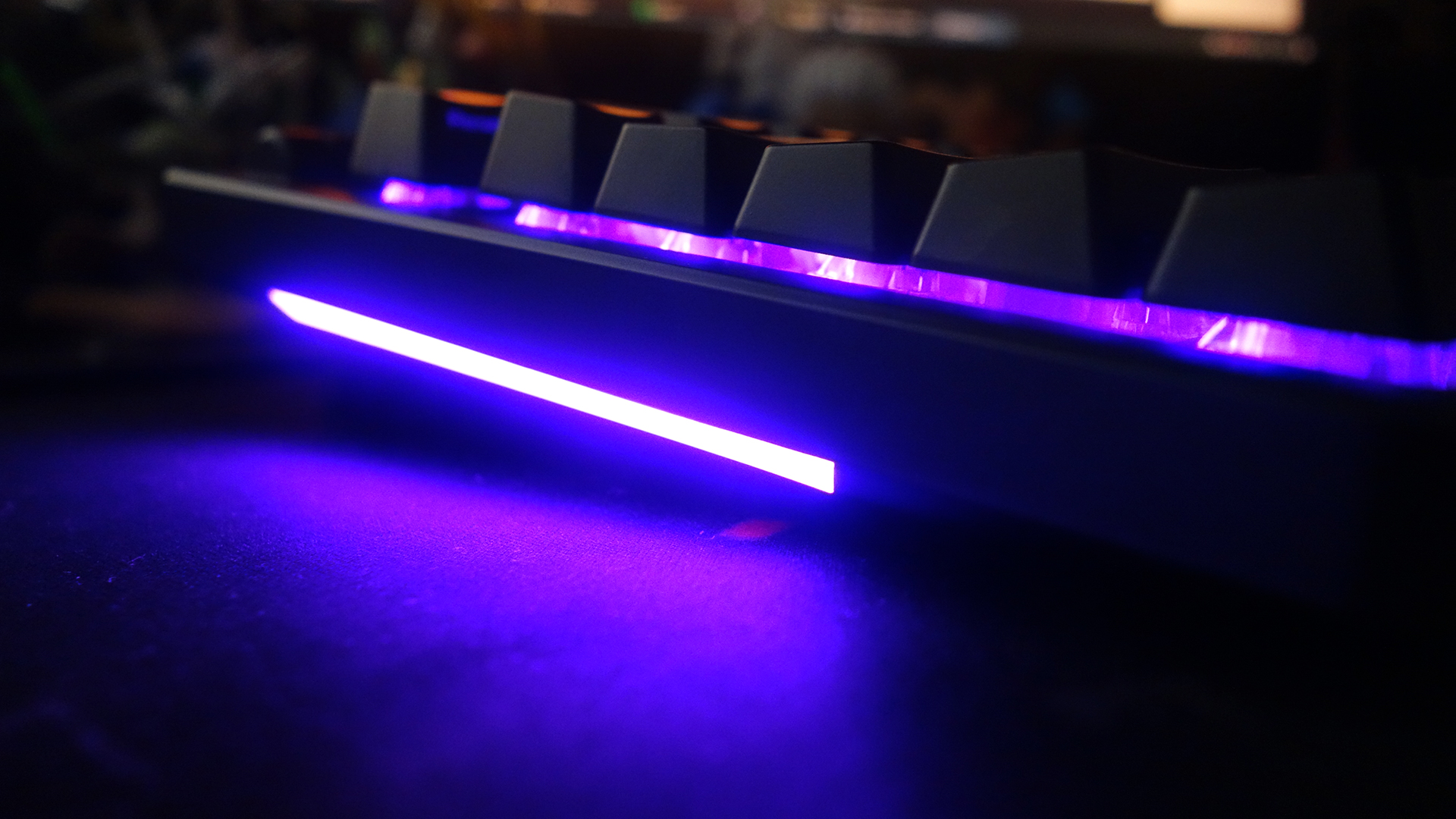 The Strix Flare is also equipped with a rather thick braided USB cable that splits into two to power the keyboard’s USB 2.0 passthrough port. It isn’t necessary to connect both cables if you don’t plan to use the USB 2.0 passthrough port but it is useful for connecting your other peripherals, such as your mouse, without having to connect it directly to the back of your rig. Some people might find this feature unnecessary though and might have preferred a thinner, more flexible cable for a cleaner look.

Like many of the company’s gaming peripherals, the Strix Flare works with their ROG Armoury II software where users can customize its settings and save them to the keyboard’s onboard memory. As previously mentioned, the Strix Flare can save up to six profiles including five custom and one default profile. With the ROG Armoury II software, users can customize RGB lighting, turn on Aura Sync for all the ROG Armoury II compatible peripherals, create and assign macros to specific keys as well as set delay and repetition, and look at usage stats. 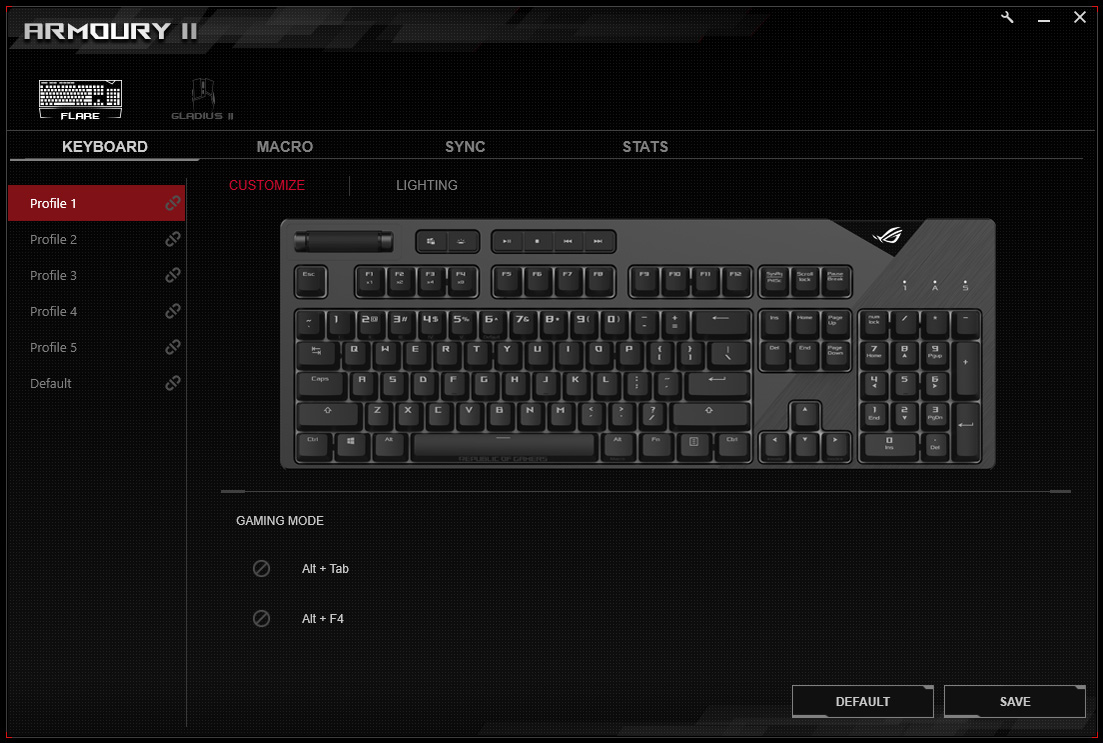 While the ROG Armoury II software is pretty to use with the Strix Flare, specifically when syncing its RGB lighting with other compatible peripherals, things start getting troublesome once Aura Sync compatible components are brought in. ROG Armoury II and the Aura Sync software are unable to run at the same time so you’re forced to choose between just syncing your peripherals or your entire system. We really hope ASUS comes out with a fix to this issue or a completely new and unified software for all their Aura Sync-powered products. 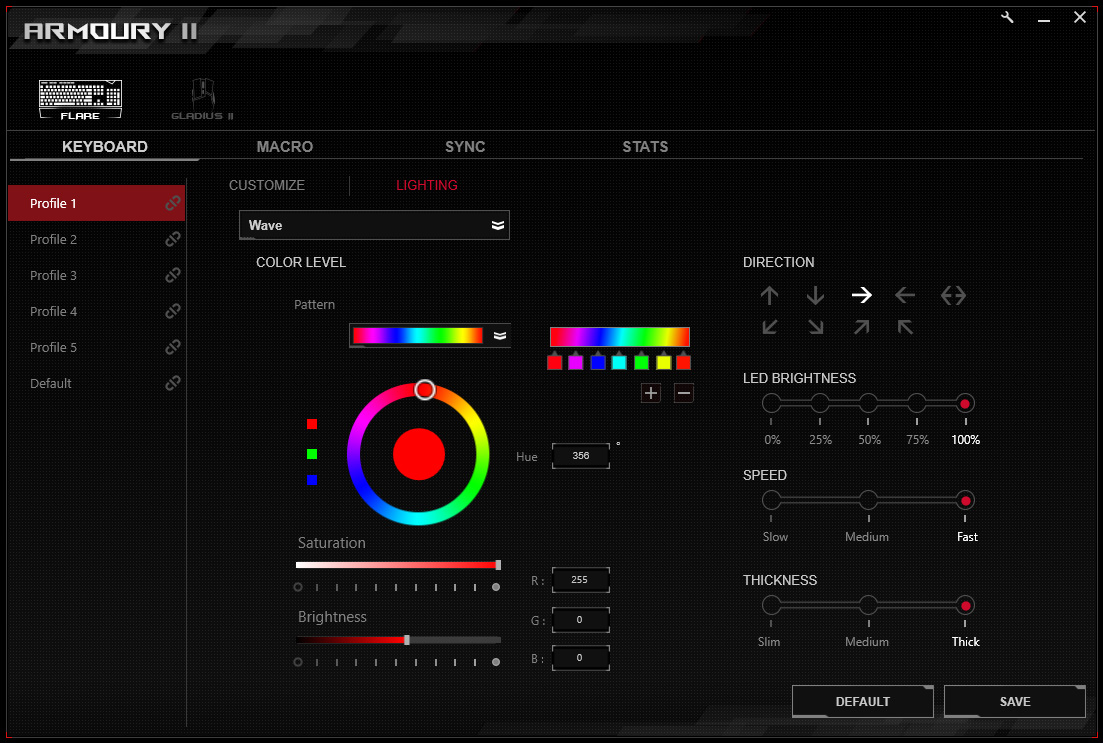 The ASUS ROG Strix Flare may very well be the best mechanical keyboard the company has released so far. It’s a simple but great-looking keyboard with excellent build quality, extensive features, and top-of-the-line performance. While it does have a few shortcomings, mostly with the lack of metal in the build and the company’s conflicting softwares, the Strix Flare is still one of the best keyboards we’ve used in its price range. While its price tag of a little above PHP 9,000, the Strix Flare may be out of reach for many, but those who pick it up will definitely enjoy it.