ASUS ROG Phone 2 Gaming Smartphone Review – Going Above and Beyond

When ASUS released the original ROG Phone last year, it was easily the most thoughtful and purposeful take on an actual gaming smartphone. This year, with the ROG Phone 2, the company has doubled down on what made the original so good while also balancing the addition of new features while dealing with some of the issues that were present with its predecessor.

First off, the ROG Phone 2 is significantly bigger and heavier, measuring 22% larger than its predecessor and weighing in at 240 grams. The larger body allows it to fit a bigger 6.59-inch display while also keeping the bezels above and below the screen. Unlike other flagship phones in the market, the ROG Phone 2 isn’t on board the full-screen, notch-equipped wagon just yet as keeping some bezel above and below the display makes it much easier to hold the device horizontally, when gaming, without worrying about accidental screen taps. 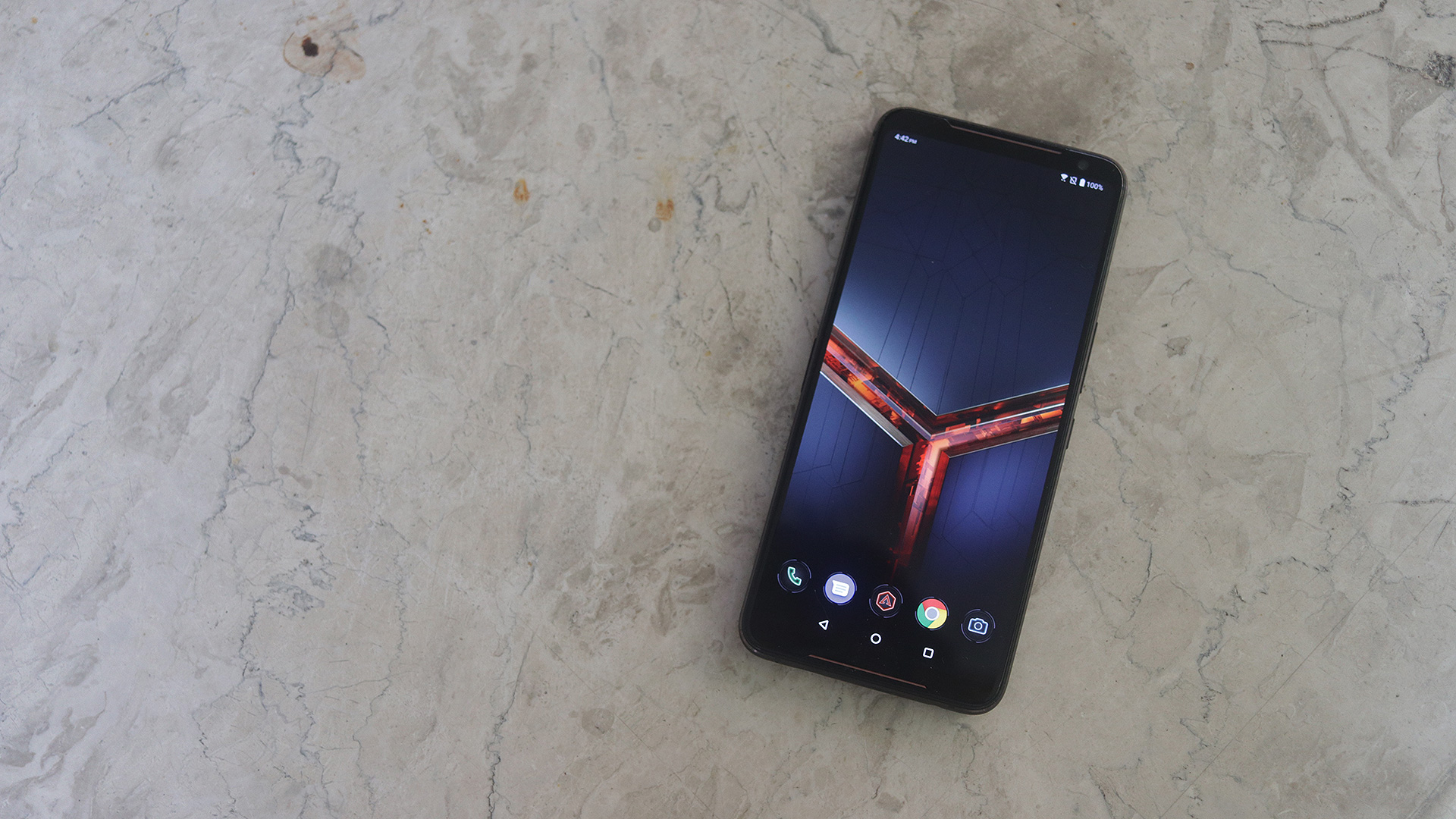 The larger display of the ROG Phone 2 is also faster at 120Hz, making it the first AMOLED smartphone to reach that high a refresh rate. And the faster display feels like it comes at the right time as more and more mobile games have begun to reach those framerates. The AMOLED panel in the ROG Phone is even more impressive than it was in the original ROG Phone. With 10-bit HDR and 600 nits of brightness, the display quality of the ROG Phone 2’s screen is beautiful to look at both when gaming and watching videos. 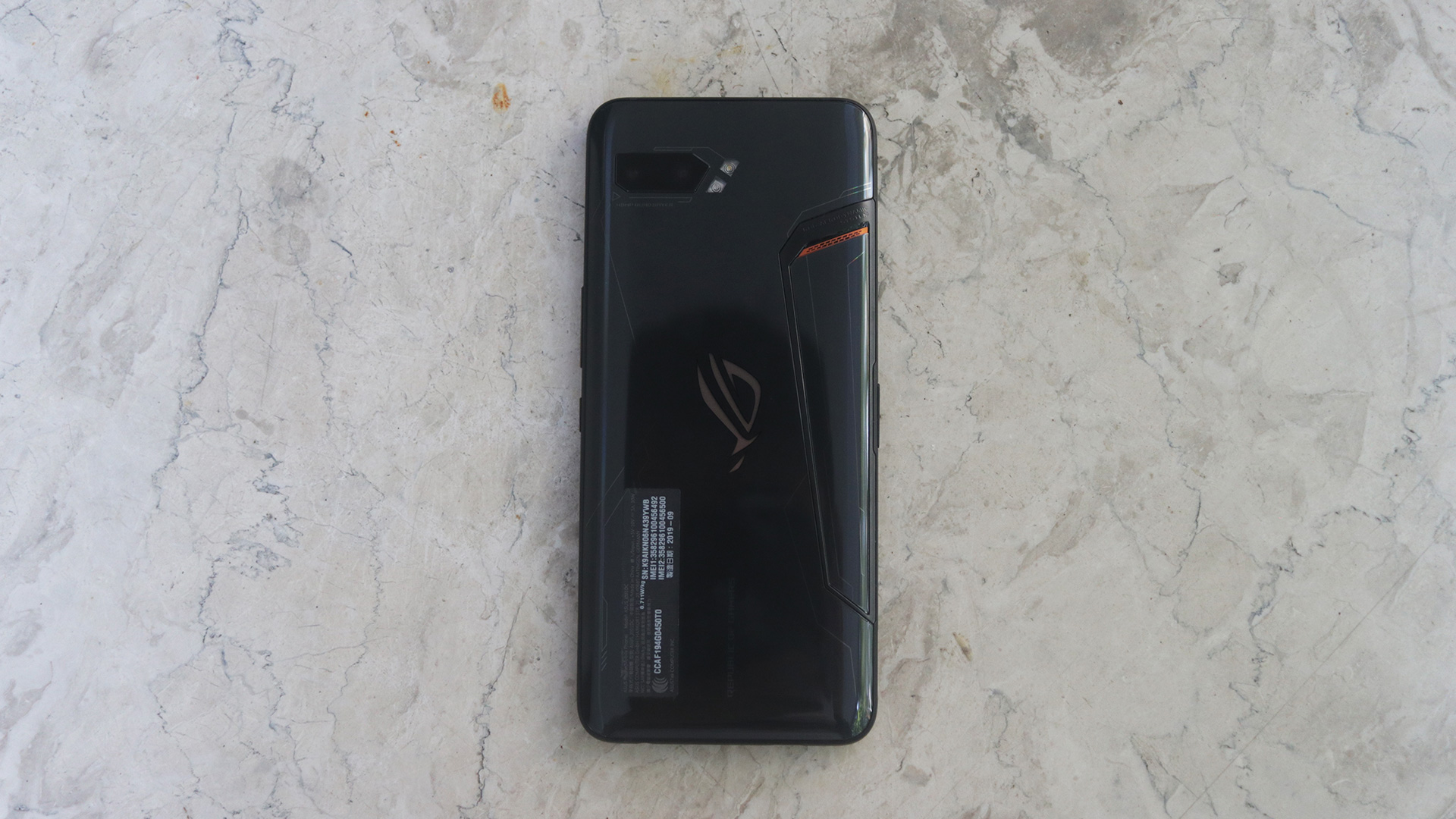 The rear of the ROG Phone 2 also received a minor but attractive facelift. Most noticeably, the right-hand side is now mostly covered in glass and the two faux vents have been replaced with a single, narrow, yet functional vent. With the vent now creating a direct opening into the device’s motherboard, water damage is now one of the ROG Phone 2’s worst enemies and users should keep it away from any liquids. The rear-mounted fingerprint sensor has also been removed in favor of an in-display fingerprint sensor. 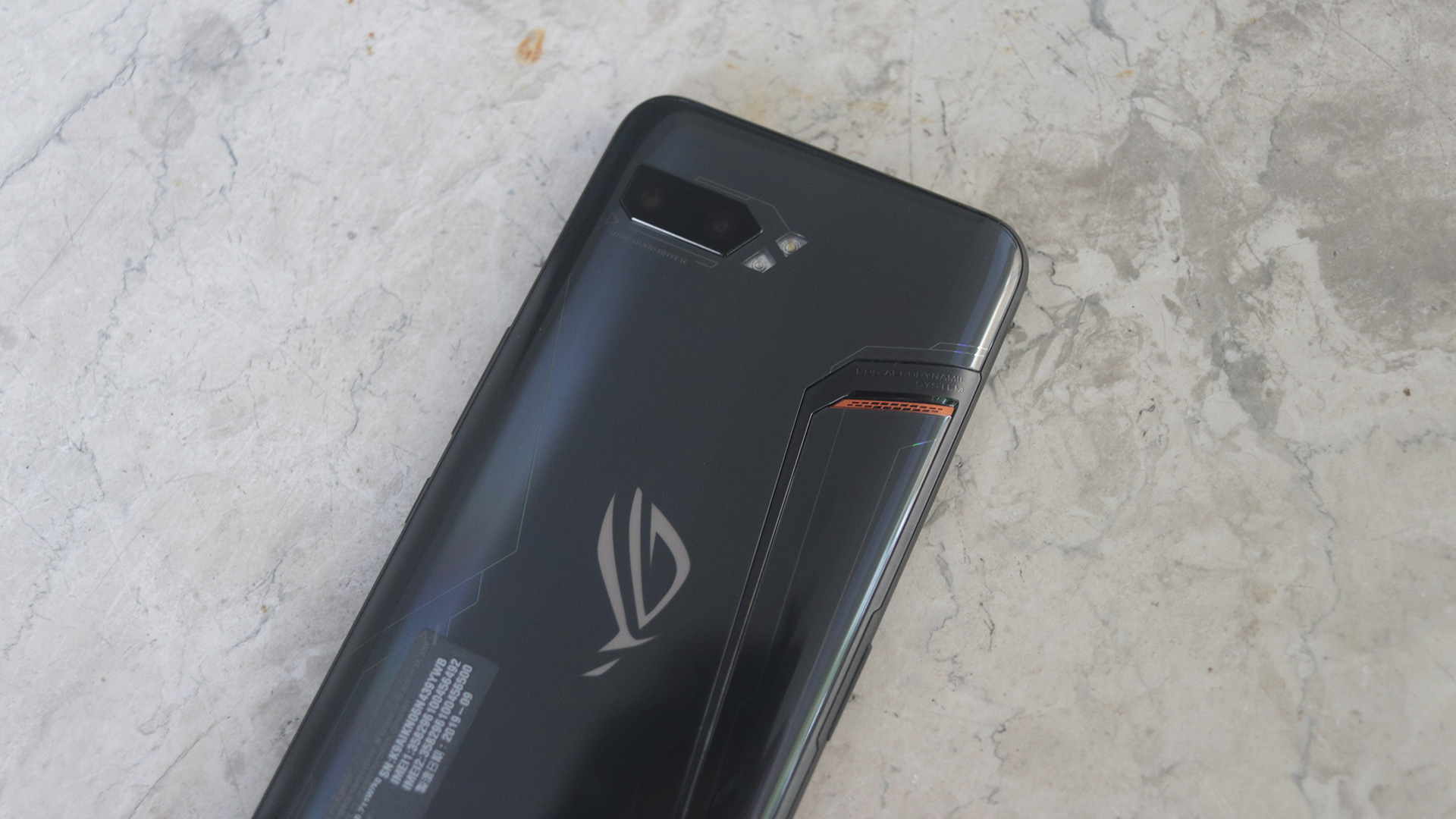 The rest of the phone’s design is largely the same as its predecessor, including the placement of the USB Type-C port, 3.5mm jack, power button, volume rocker, and the side-mounted double USB Type-C port that can be used to charge the device while holding it horizontally or for the new range of accessories. One of those accessories is a new plastic skeletal case that’s included with the ROG Phone 2. The design of the new case hides less of the phone, allowing users to better appreciate the device’s new rear design, while still being able to protect it from dings and scratches. 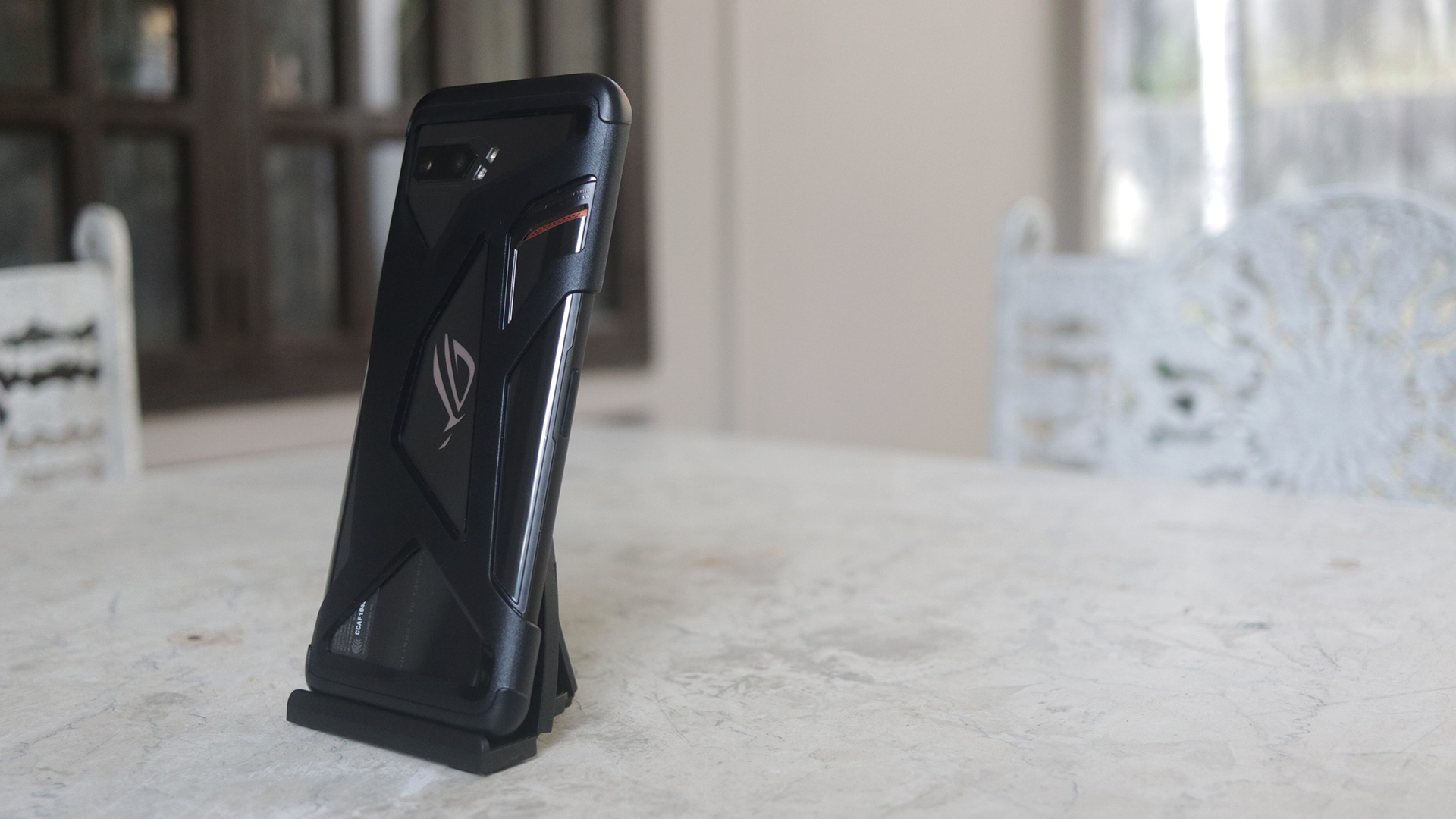 The AirTriggers, the most innovative feature of the ROG Phone is still expectedly present in the ROG Phone 2. Just like the old AirTriggers, they can be mapped to any part of the display to simulate screen taps, ostensibly giving the user two shoulder buttons and freeing up their thumbs to control other things in the game such as movement. And as expected, ASUS has improved the AirTriggers on the ROG Phone 2, calling them the Air Trigger II. They now feature better haptic feedback and new gestures such as simulating holding the trigger down as well as a sliding gesture, making them even more impressive than they were in the original ROG Phone. 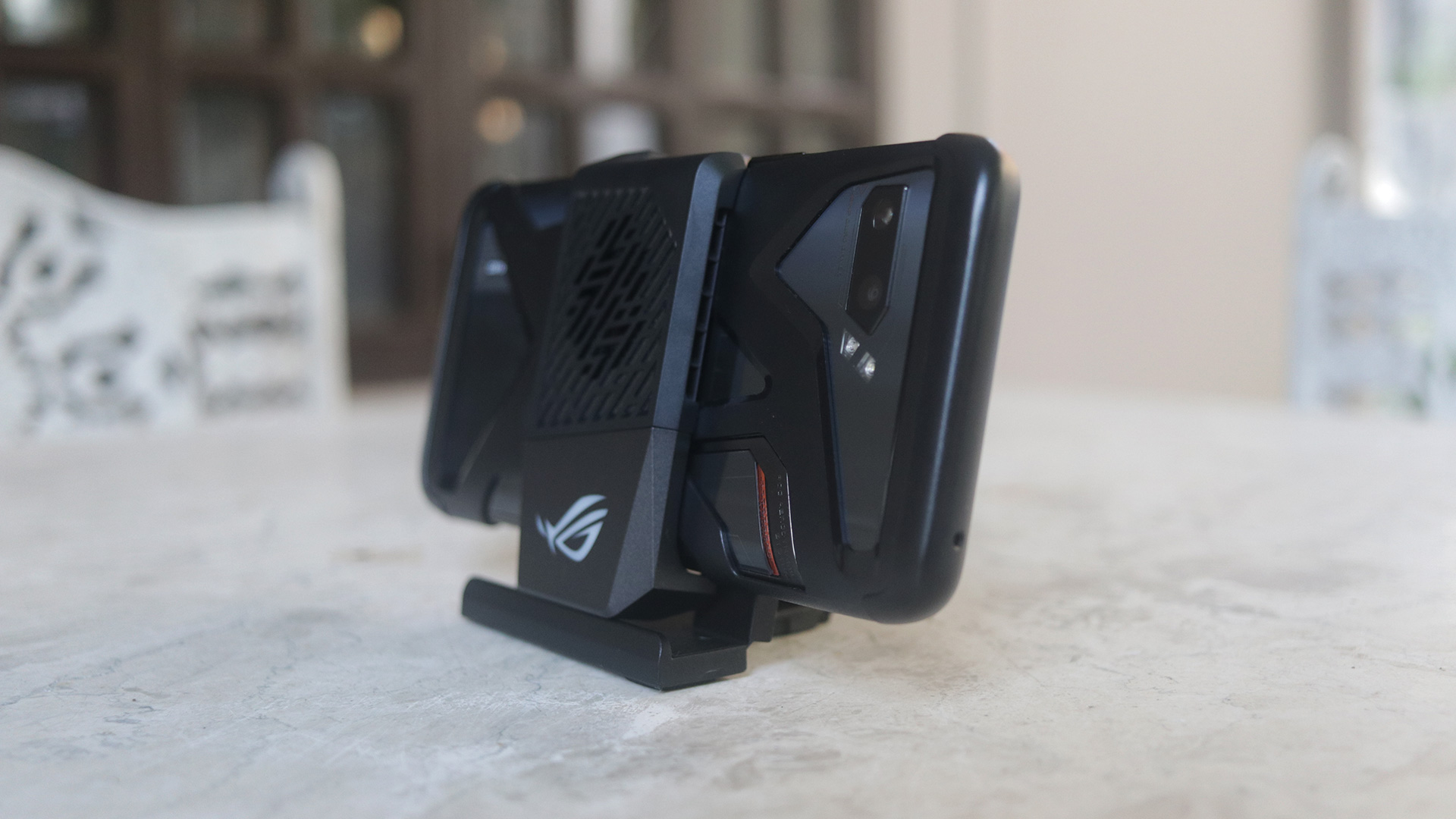 The ROG Phone 2 also packs several software features that help it stand out even more as a gaming smartphone. The Armoury Crate is the device’s gaming hub where users can not only launch their installed games from but also create and customize profiles for each game, controlling everything from the display’s refresh rate and touch sensitivity to the phone’s performance, network, and audio settings. Users can also create specific AirTrigger II, Key Mapping, and macro profiles for each game through the Armoury Crate.

The Armoury Crate is also where users can monitor the phone’s CPU and GPU usage and temperature as well as the device’s RAM and storage. Even the device’s rGB lighting, fan speed (when the AeroActive Cooler II is attached), and general ArTrigger II setup and settings can be seen and controlled. 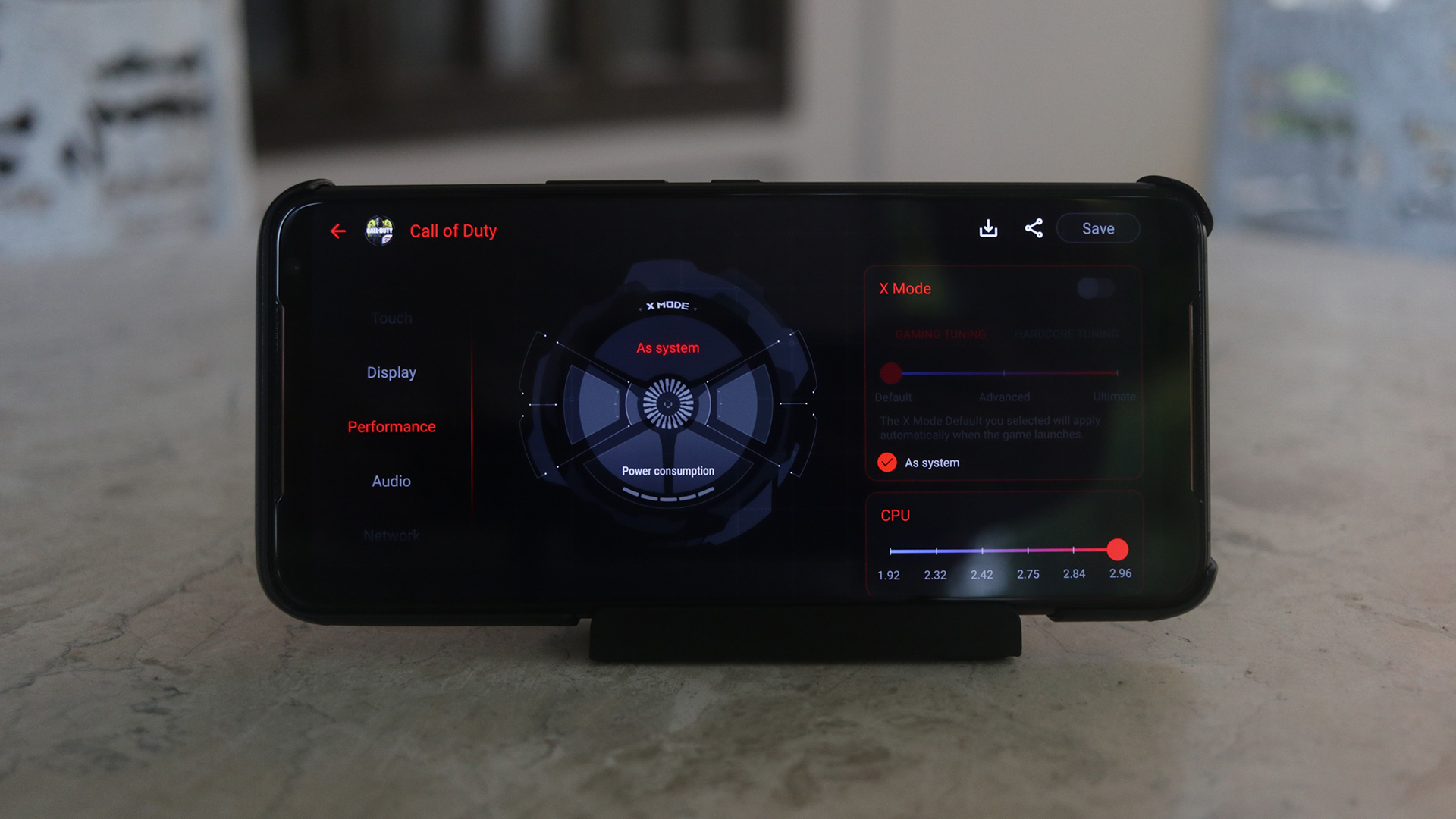 Once players are in-game though, they can also access the ROG Phone 2’s Game Genie by just swiping from the left edge of the display, which adds a second layer of dedicated gaming features to the ROG Phone 2. With the Game Genie, users can monitor the game’s framerate, the device’s CPU speed and temperature, and if the phone’s X Mode is activated. Users can also adjust and even lock the screen brightness, turn off alerts, block calls, switch to a mobile data only connection, and activate an on-screen info display.

The Game Genie also features that can free up processing power and memory to improve game performance, create and activate macros, lock the touch screen, begin display and audio recording, and even begin a live stream to platforms such as YouTube or Twitch straight from the ROG Phone 2. The sheer amount of features dedicated to not only improve the ROG Phone 2’s gaming experience but expand it even further, by including things such as recording and live streaming, is incredibly impressive. 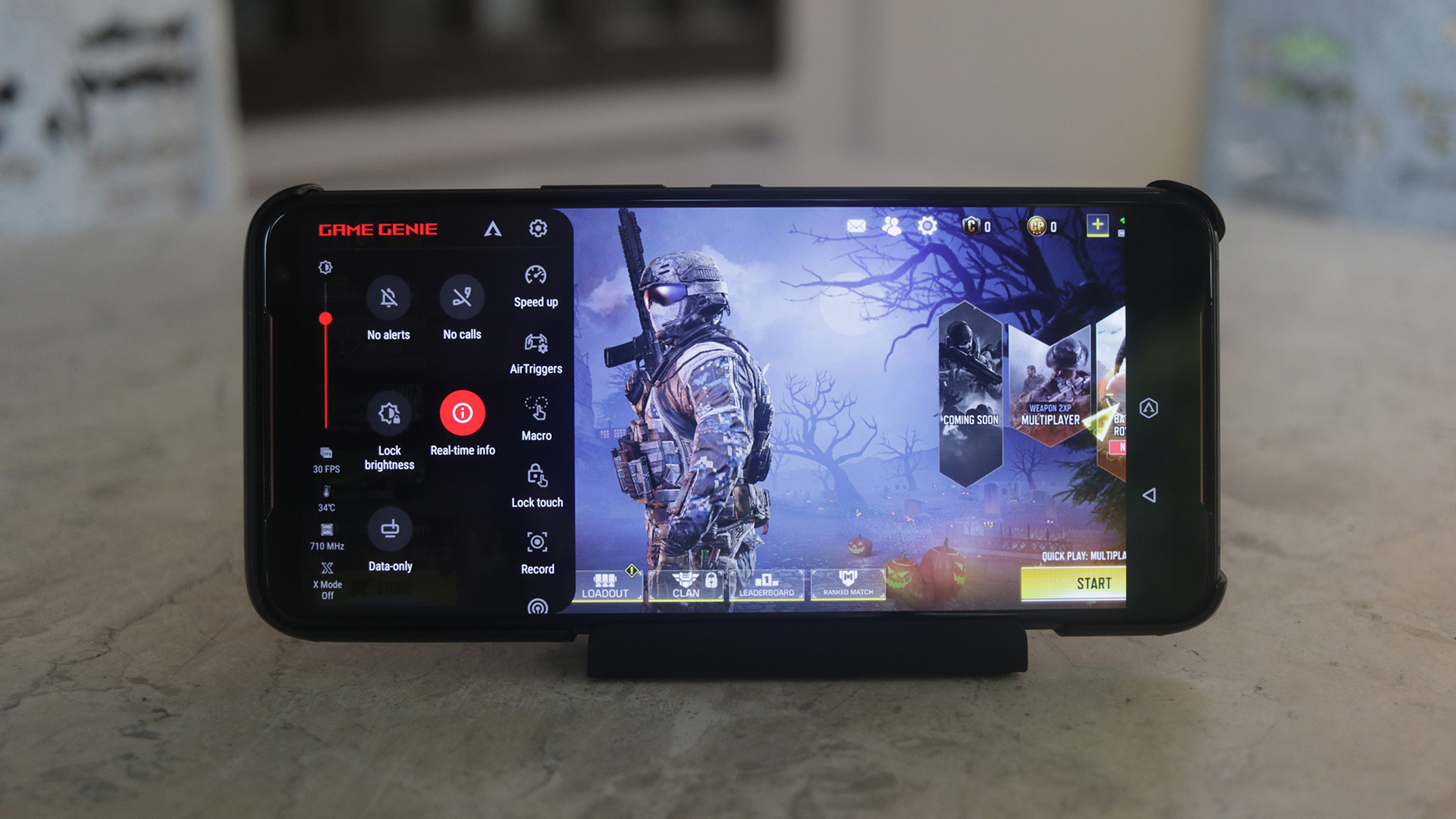 Some of the features of the ROG Phone 2 wouldn’t be possible though without being backed by specs that can keep up. Just like the original ROG Phone, ASUS has gone the extra mile to make sure the ROG Phone 2 would be an incredibly powerful device. The ROG Phone 2 is the first gaming smartphone to be equipped with the higher-clocked Qualcomm Snapdragon 855 Plus processor, which is then coupled with the Adreno 640 GPU and a whopping 12GB of LPDDR4x memory.

We ran several synthetic benchmarks on the ROG Phone 2, including AnTuTu Benchmark, GeekBench 5, and 3DMark’s Sling Shot Extreme and were fairly impressed with the results. While we aren’t able to compare our GeekBench 5 results with our results from the original ROG Phone (as we used GeekBench 4 for that) we are able to see a significant difference in performance in both the AnTuTu and 3DMark results, showing a 40% and 28% increase in performance, respectively. 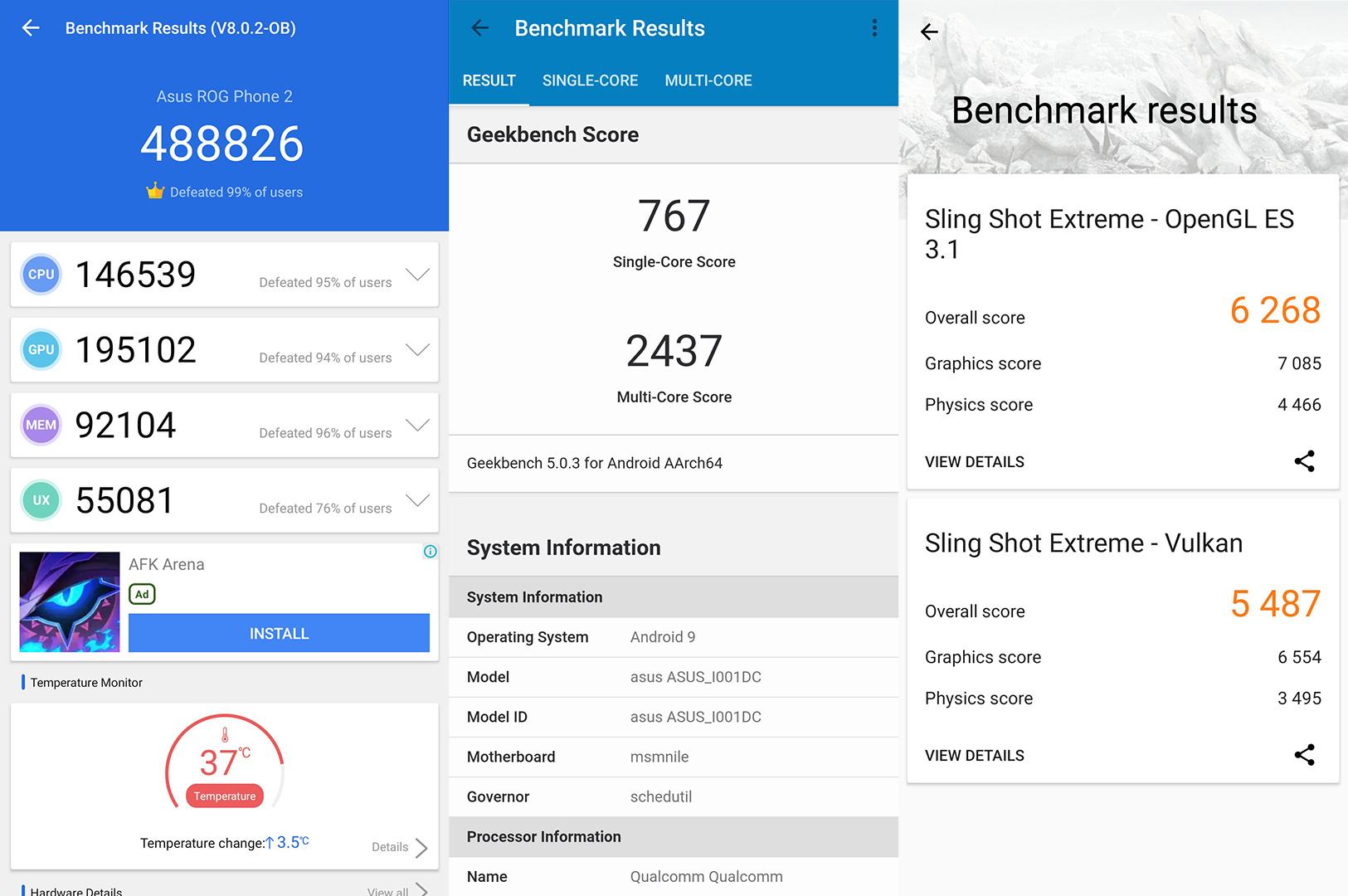 We played a number of games on the ROG Phone 2, including COD Mobile, PUBG Mobile, Mobile Legends, and Final Fantasy Brave Exvius, and the phone was easily able to run each game at 60 fps according to the on-screen info bar from Game Genie. As for maximizing the phone’s 120Hz display, ASUS has a growing list of games that already support the feature that can be viewed online or through the Armoury Crate app. We tried out both Injustice 2 and Shadowgun Legends and we were incredibly impressed by how good they looked running on the 120Hz display. 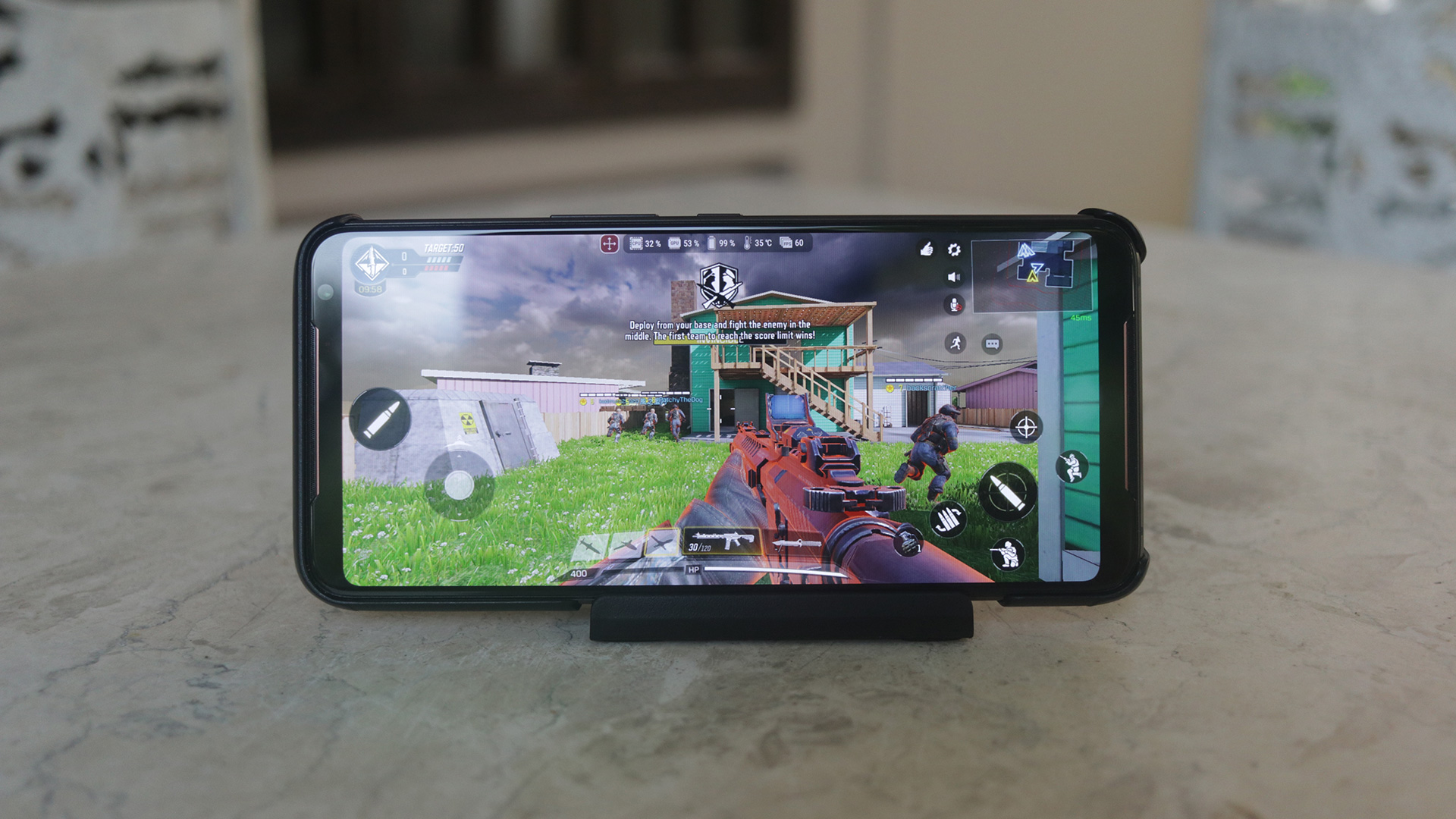 With so much power under its hood, it isn’t unexpected that the ROG Phone 2 packs a humongous 6000 mAh battery to be able to keep up, which accounts for much of the new phone’s weight. With light to medium usage, the phone easily lasts two days and even longer if you’re conservative with some of its features such as the X Mode, RGB lighting, and the 120Hz display (which can be set to 60Hz when not needed). With battery this large, we would normally expect it to last much longer but with the amount of power the ROG Phone 2 is using, we’re not completely surprised.

Luckily, ASUS has included a 30W HyperCharge charger that’s compatible with any USB Type-C cable, unlike other fast chargers that use proprietary cables. The brick is capable of charging the ROG Phone 2 from almost empty to around 40%-50% in about 30 minutes, which is pretty impressive. So even if you’re in a hurry, you can quickly get the phone to almost a day’s worth of usage by just plugging it in for around that much time. Getting to a full charge takes a bit longer though at about 2 hours or less but with its large battery, that’s still pretty impressive. 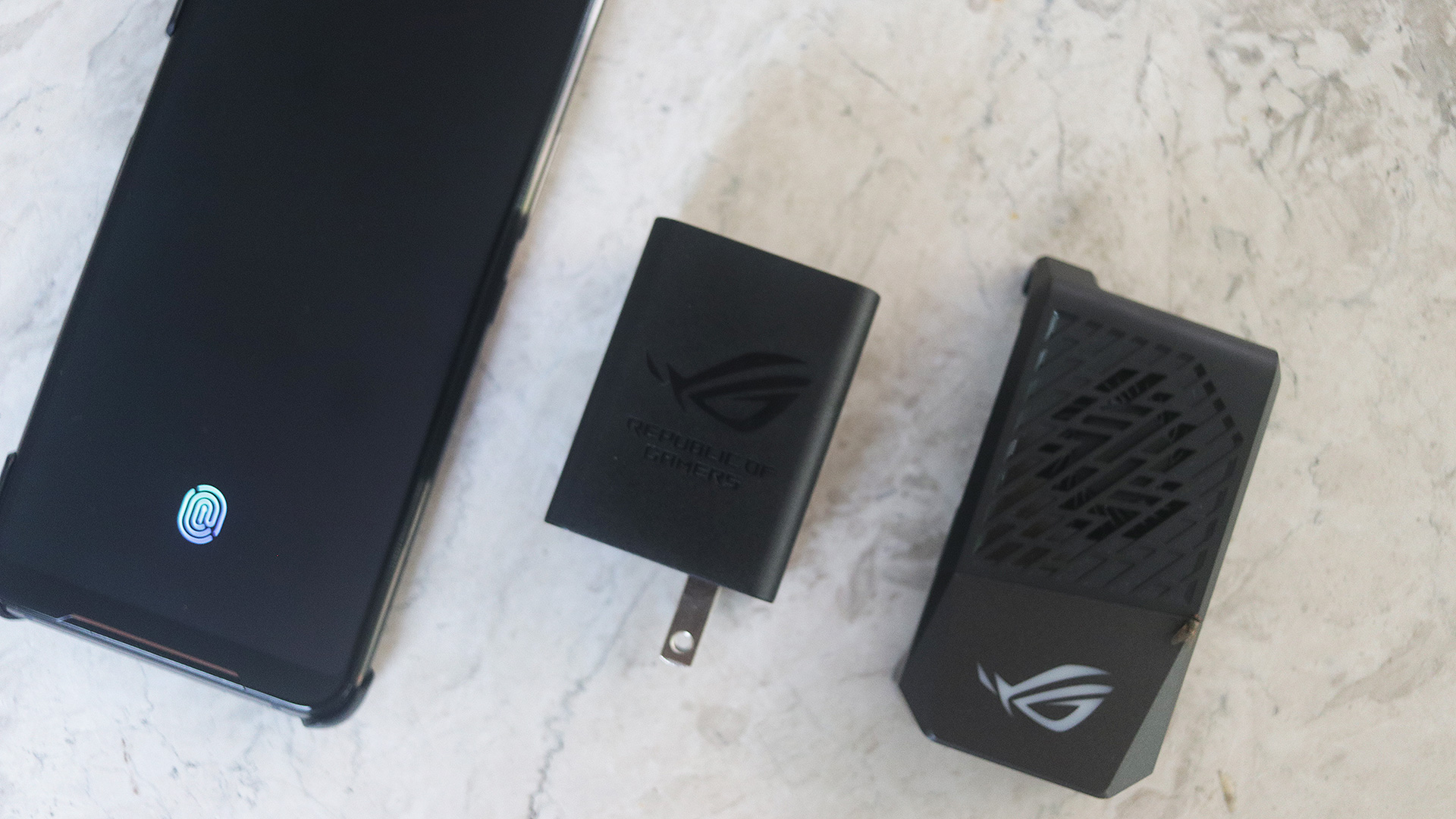 Lastly, the cameras on the ROG Phone 2 are probably and expectedly its most unremarkable feature. The rear dual cameras feature the same 48-megapixel Sony IMX586 main sensor and 13-megapixel wide-angle secondary sensor as the Zenfone 6 while the front-facing shooter features a 24-megapixel sensor. While the camera performance is decent for most situations and casual shooting, the quality really isn’t going to match up against other flagships in the market. But then again, photography isn’t the ROG Phone 2’s key selling point and isn’t what it’s designed for so the camera performance is pretty much as expected. 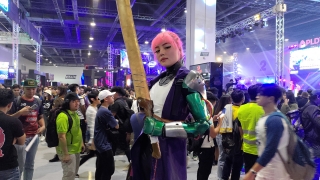 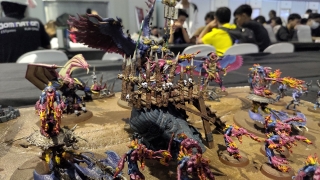 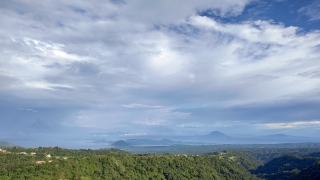 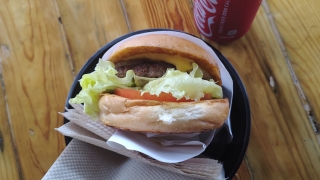