Gaming laptops have always been an incredibly expensive category in the portable computer space as manufacturers attempt to shove in as much power as they can into their latest models to keep up with the high demand of video games as well as to bring it as close as possible to desktop computer performance. And two of the challenges manufacturers have faced in the design and production of gaming laptops is to provide powerful cooling solutions as well as instill higher overclocking capabilities. So one of the top computer manufacturers in the world, ASUS, came out with a new concept for a gaming laptop that deals with both of these challenges. The ASUS ROG GX700 is the world’s first liquid-cooled laptop. It’s a two-piece device the combines a powerful gaming laptop and a liquid-cooling dock.

The GX700 looks very much like the previously released G752, which is under the same ROG brand, with the same brushed aluminum body and orange highlights as well as the black palm rest, track pad, and keyboard with red accents. Although, the aluminum body of the G752 is silver while the body of the GX700 is closer to rose gold. Furthermore, the full-sized keyboard and track pad not only look the same but are actually the same ones found on the G752 including the additional row of six shortcut/macro buttons as well as the laptop’s power button found above the keyboard.

Design-wise, both laptops are pretty much identical albeit for the side connectors, the bottom, and the absence of the giant orange grill found on the rear of the G752 which has been replaced with thinner black grills and a flat panel that features the connectors for attaching the laptop to the liquid cooling dock including two coolant ports, two locking connectors, and a power connector in the middle. 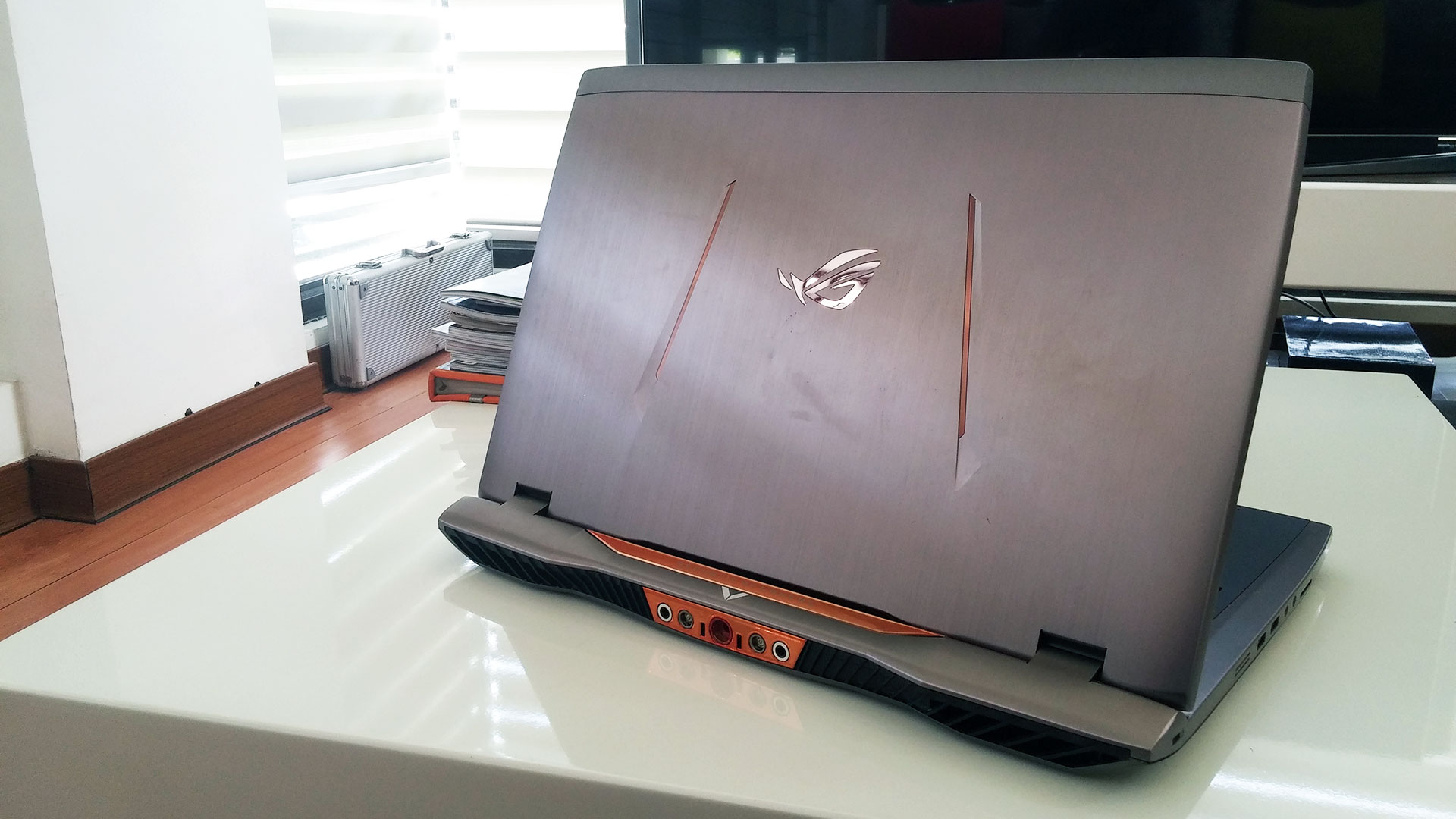 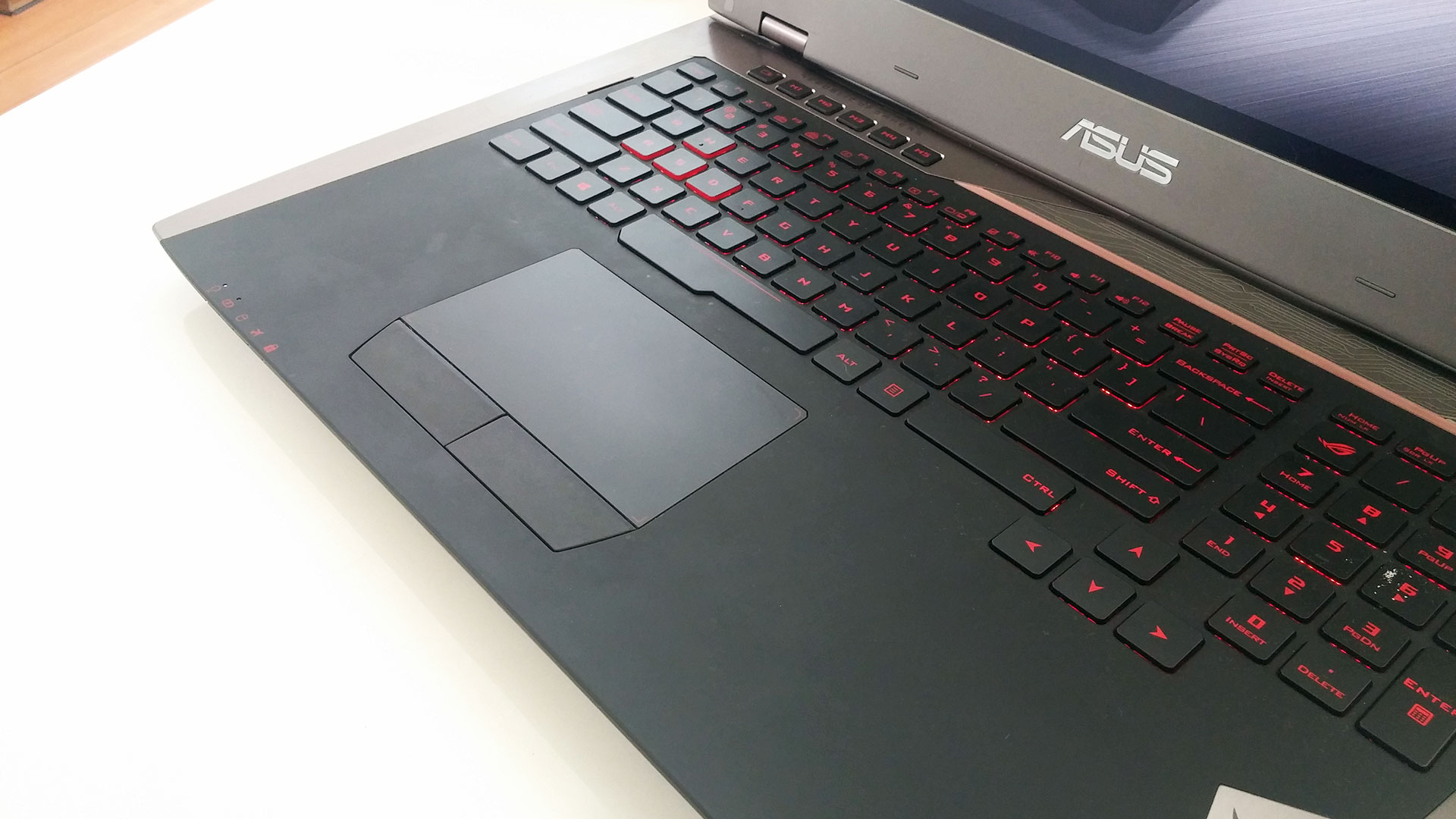 The GX700 is equipped with a slew of other connectors including some that make the laptop future-proof such as three USB 3.0 ports, two USB 3.1 Type-C ports, and one Thunderbolt port. There’s also an HDMI port, a mini-DisplayPort, an Ethernet port, a card read, and dual audio jacks for headphones and a microphone. It has pretty much all the connectors you’d probably ever need for things such as external displays, a mouse, and more.

The other big difference between the G752 is the bottom of the laptop, while removing the bottom panel of the G752 reveals the easily accessible storage bays (two M.2 and one 2.5-inch) and dual RAM slots, removing the GX700’s bottom casing only reveals one M.2 slot and two RAM slots leaving the remaining three M.2 slots hidden making the GX700 less serviceable. This difference is forgivable though as the specifications of the GX700 will definitely not leave anyone wanting for more RAM or storage.

Also revealed when removing the bottom cover is the laptop’s cooling system which is a combination of a liquid and an air cooling system. The air cooling system, which consists of heat pipes and two exhaust fans on either side of the laptops rear, is used whenever the GX700 is used by itself and unattached to the dock. But once the laptop is locked into its liquid-cooling dock (which we’ll discuss next) then the liquid cooling system takes over. 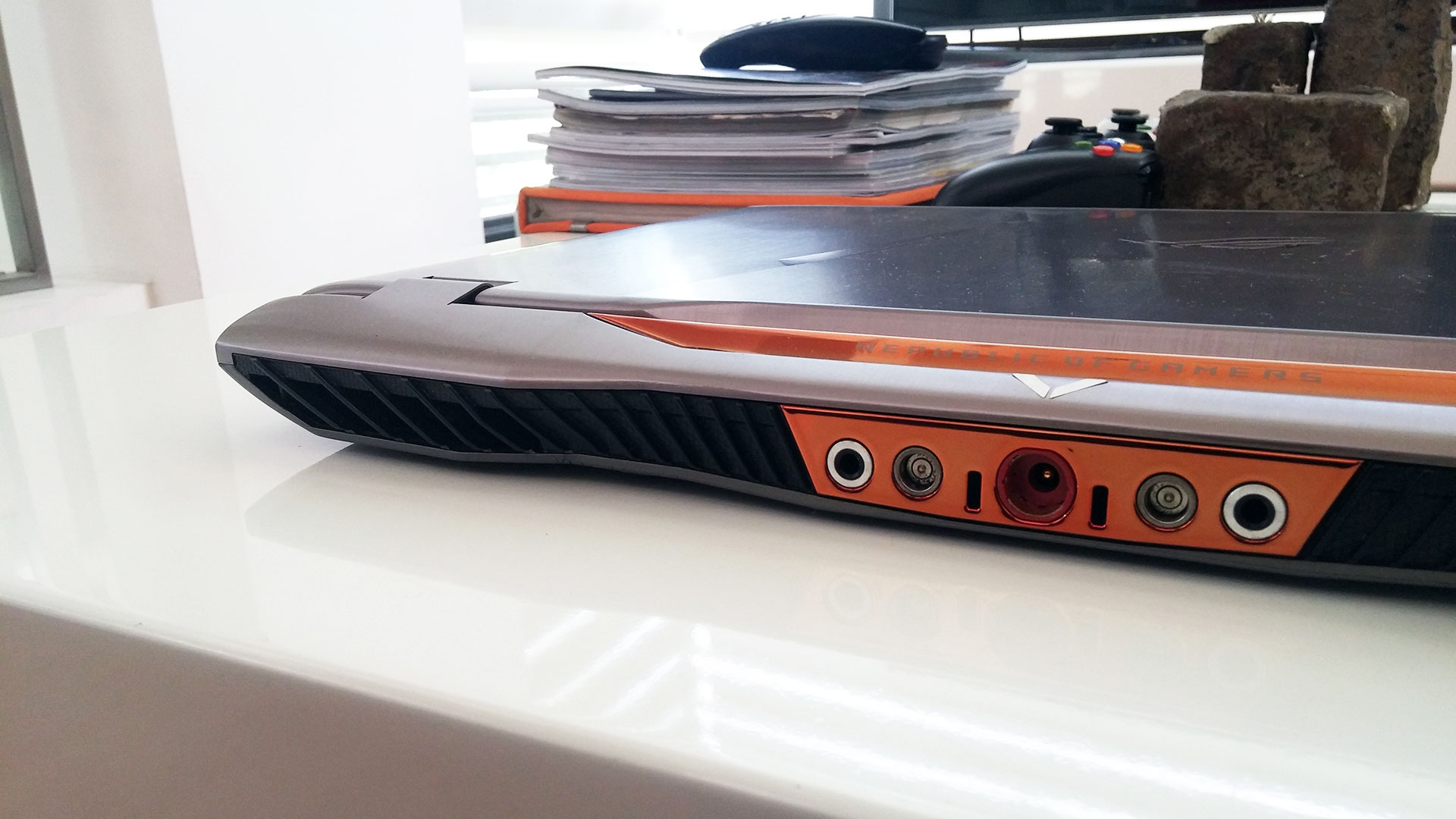 Other than the GX700’s beastly specifications (which we’ll get to later) the main reason for the existence of this laptop is its accompanying liquid-cooling dock, making it, as previously mentioned, the first liquid-cooled laptop in the market. The liquid-cooling dock, a gigantic piece of plastic and mesh which weighs a whopping 4.8kg, is definitely not something you were meant to bring around with the laptop. It was certainly meant to be left on your desk and used whenever you got home to give the GX700 a boost of performance through overclocking.

The dock features the same color scheme as the GX700 including the rose gold brushed aluminum and orange accents. The top of the dock is dominated by a section of black steel mesh which houses the dock’s two 92mm radiators, fans, cooling block, and the rest of the dock’s liquid-cooling system. When the dock is used, the mesh section of the dock glows red signaling that the dock is engaged and its coolant is flowing properly.

There’s a large plastic platform on the front of the dock where the GX700 is meant to lay on which features several cones and moving locks which are meant to keep the laptop in place when used. When docked, the cones and locks as well as the liquid cooling assembly which includes the coolant ports, locking connectors, and power connector, are initiated by a gigantic lever on top of the dock. Disengaging the locks and removing the laptop can be done with a small push button on the front of the dock, positioned right behind the laptop display when it’s docked.

The liquid-cooling dock holds the GX700 in place pretty firmly and I didn’t encounter any issues with coolant leakage or residue during the weeks I spent using it. Connecting and disengaging the laptop from the dock is also pretty easy and straightforward making it accessible for both beginners and experienced users. Overall, ASUS did an excellent job designing and producing the liquid-cooling dock and system of the GX700, proving that liquid cooled laptops is definitely possible. 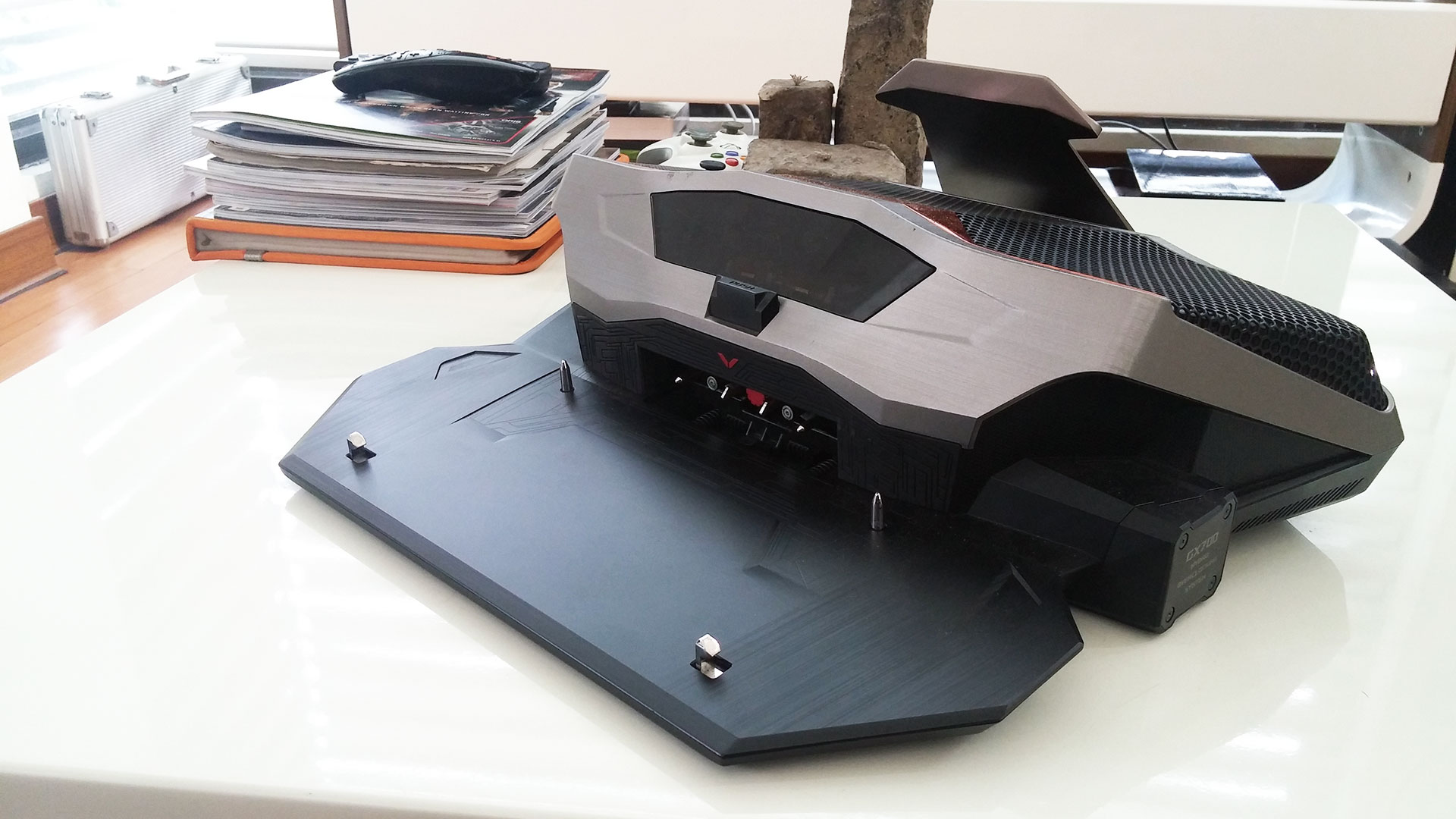 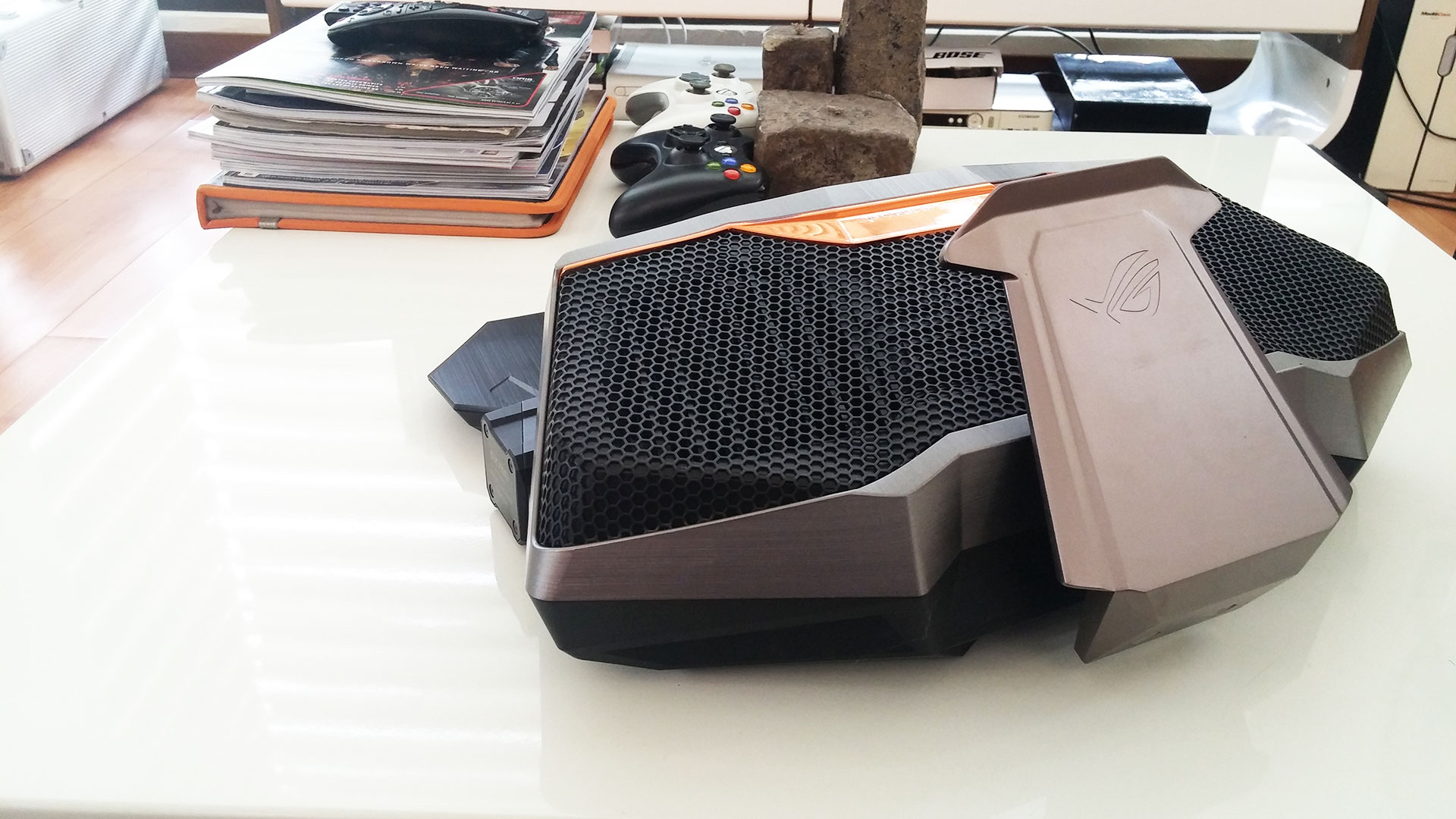 The GX700 features some amazing specifications for a laptop, rivaling even some desktop computers. First off, it comes equipped with a gigantic 17.3-inch full HD 1080p display that’s powered by an NVIDIA GeForce GTX 980 desktop GPU with a whopping 8GB of GDDR5 VRAM. Yes, the GX700 isn’t equipped with one of NVIDIA’s mobile graphics chips like most gaming laptops but instead it features the same graphics chip used by desktop graphics cards, specifically the GeForce GTX 980, basically giving the GX700 desktop-class graphical power.

Next is the GX700’s processor which is an Intel Core i7-6820HK. While it isn’t a desktop-class model like the GX700’s graphics chip, it’s still one of Intel’s most powerful laptop CPUs in its Skylake series with its four cores with Hyperthreading clocked at 2.7GHz-3.6GHz and its large 8MB L3 cache. But the best thing about the i7-6820HK is that it features an unlocked multiplier which allows it to be overclocked easily, making it perfectly suitable for the GX700 and its dock and what they’re meant to do, which is utilize the liquid cooling system to be able to safely overclock and improve performance.

The rest of the GX700’s specifications include a whopping 32GB of DDR4 RAM, two 256GB M.2 SSDs in RAID 0 configuration, 802.11ac Wi-Fi connectivity, and a built-in 6-cell 93 Whrs battery. The GX700 pretty much has everything you’ll ever need from a gaming laptop and more from both its amazing specifications and its array of connectors, making it both incredibly powerful, flexible, and future-proof. 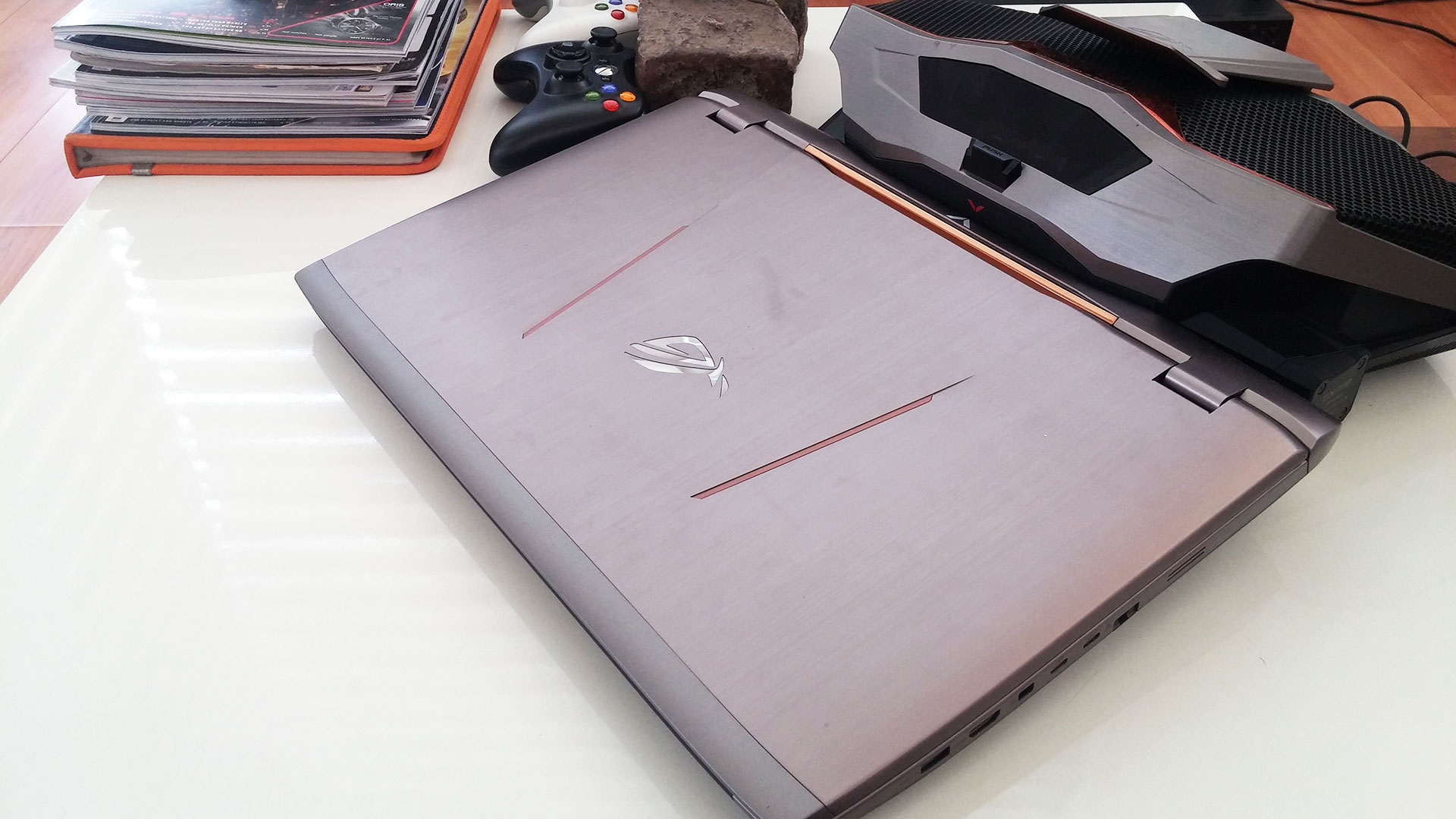 Gaming on the GX700 is an absolute delight as it’s easily able to handle most modern games on high or ultra settings and achieve around or sometimes even more than a framerate of 60 frames per second while the laptop was on its own but when it was attached to the dock and overclocked, it was able to, at times, achieve a framerate of even more than 100 frames per second in several of the titles I played. These games included Fallout 4, The Witcher 3: Wild Hunt, Middle Earth: Shadow of Mordor, and Dota 2. The GX700 definitely did not disappoint in this regard and performed even more than expected with the help of its liquid cooling system which allows the GX700 to be overlocked and pump out even more power.

Lastly, the battery life of the GX700 is probably where it is at its weakest. Considering the amount of power the GX700 is capable of dishing out, it isn’t surprising that it also requires a whole lot of energy to be able to do so. And with its measly 6-cell 93Whrs battery, it isn’t surprising that we were only able to squeeze out around 2 hours of battery life from the GX700 before we had to either plug it in or attach it to the dock. Considering though that this is a gaming laptop and it will most probably be always plugged in, the lackluster battery life isn’t all that of an issue and is more expected than surprising.

While the GX700 is definitely an impressive laptop with an amazing concept, design, and specifications, its price tag of around P250,000 makes it seems more like a trophy than a gaming laptop and also makes it very inaccessible to most consumers. Coincidentally, ASUS only ever released 20 units of the GX700 truly sealing its position as a limited collector’s item. It also seems like the GX700 is more of a proof of concept rather than a new standard in gaming laptop design but, because of its successful design, it could very well mark a new direction of innovation for gaming laptops in the future. Regardless, the GX700 is an amazing piece of hardware with incredible performance and everything you’d probably need from a gaming laptop. It’s undoubtedly one of the best gaming laptops in the market and one of the best ASUS has ever released.