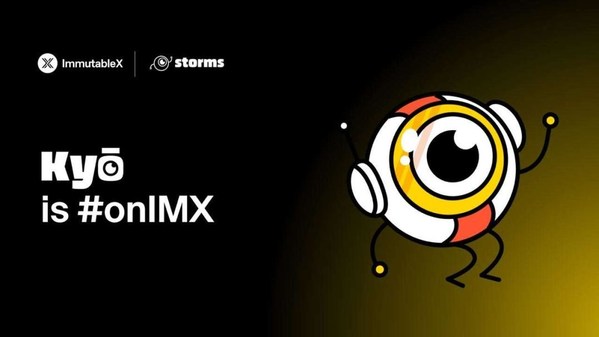 Named after the Japanese word for "joy, fun, and entertainment," Ky? is a social and hyper casual gaming platform determined to bring a significant portion of the global billions of gamers onto Web3. With a refreshing take on the decentralization and inclusivity benefits of a Web3 game, all Ky? avatars and in-game assets will be minted as fully-carbon neutral NFTs, which can be bought, sold, and traded gas-free on the Ethereum blockchain.

Synchronous with Storms’ studio vision of connecting billions of gamers with access to quality gaming content, it is also on a mission to provide frictionless Web3 access to the 7 billion mobile users worldwide[1] .

Acknowledging the size of the opportunity at hand, ImmutableX will provide Ky? with the Web3 infrastructure needed to scale quickly and securely via its ZK-rollup technology, whereas Ky? is also making it easier for traditional game developers currently limited by Web 2.0 distribution economics to integrate and distribute their games via the Ky? platform.

The partnership comes at a time when mobile games are constantly on the rise. Last year, the sector was worth $131 billion and is projected to reach $173 billion[2] in 2026. Notably, Asia is the most rapidly growing region when it comes to mobile gaming, generating the most revenue in the segment.

Ky? marks Storms’ first venture in Web3, and its past success as an international gaming leader is undeniable. Since its inception in 2020, Storms has assembled a library of 60+ instant and native games, obtained exclusive licenses to valuable IPs from Halfbrick Studios (Fruit Ninja, Jetpack Joyrides etc) and Voodoo Games (Helix Jump), and developed a strong distribution network of partners, aggregators, super-apps, telcos, and brands.

Their most popular game, AZ Run has amassed over 12M app downloads and over 250M views on user-generated YouTube content, while its Web-based instant games platform achieved a peak of 4M monthly active users recently.

Meanwhile, one of the major investors in Ky?’s parent company Storms is iCandy, the largest independent game developer in Southeast Asia backed by Web3 gaming company Animoca Brands, and other notable shareholders including Singtel, AIS and SK Telecom Group.

Storms CEO and President of Web3 Gaming at iCandy, David Yin, brings decades of experience at top companies (including as Head of Business Development – Google Play Apps and Games) acquiring, driving, and building a pipeline of mobile games, while the surrounding leadership team has earned their stripes at top consulting firms, gaming giants, and Fortune 500 companies.

"From traditional gaming to Web3 gaming, Storms remains committed to delivering quality and frictionless gaming experience for billions of players, and I am happy that ImmutableX shares the same vision. Thanks to ImmutableX’s unparalleled scalability, zero gas fees and easy-to-use APIs, Ky? gaming platform is now one step closer towards empowering gamers with total control over their in-game assets." – David Yin, Chief Executive Officer of Storms.

The wealth of Storms leadership team’s gaming knowledge has played an integral role in crafting Ky?’s ambitious vision, with which Immutable is deeply aligned.

"When evaluating early-stage ventures, many investors bet on the founding team itself. The same applies to bringing new partners into the ImmutableX ecosystem. We are thrilled to be working with Ky? and Storms, whose existing library of games and experienced team make them a valuable partner as we bring the next billion players to Web3 gaming." – Robbie Ferguson, Co-Founder and President at ImmutableX.

Ky? platform’s Alpha access will be available from early 2023 onwards. For some information, please visit www.kyo.games.

Storms is a Singapore-headquartered gaming company owned by strategic shareholders that include   iCandy Interactive, AIS, and SK Telecom. It is building an inclusive ecosystem for Web 3 gaming, where players worldwide can be entertained and connected through quality hyper casual gaming content.

Immutable is advancing the next generation of web3 games through ImmutableX, an industry-leading NFT minting and trading platform and the world’s first Layer 2 rapid scaling solution on Ethereum.

Today ImmutableX, leveraging ZK roll-up technology from Starkware, has grown to become the leading platform to mint, trade and scale web3 games and NFT projects on Ethereum,  offering builders and innovators a carbon-free, no gas fee solution with unlimited speed, scalability, security, and liquidity. ImmutableX is the platform of choice for world-class web3 games such as Guild of Guardians, Illuvium, Embersword, Planet Quest and many more.