JAKARTA, Indonesia, April 26, 2021 /PRNewswire/ — The 2021 VALORANT Champions Tour (VCT) has almost reached its halfway point, finishing this competitive segment with the VCT Stage 2 – Challengers SEA – Playoffs. In Indonesia, more than 450 players participated in the 2 open qualifiers rounds, where teams competed for the two seats available to represent the country in the upcoming VCT Challengers SEA – Playoffs, the second phase of a regional level tournament in Southeast Asia that will be hosted by Indonesia. 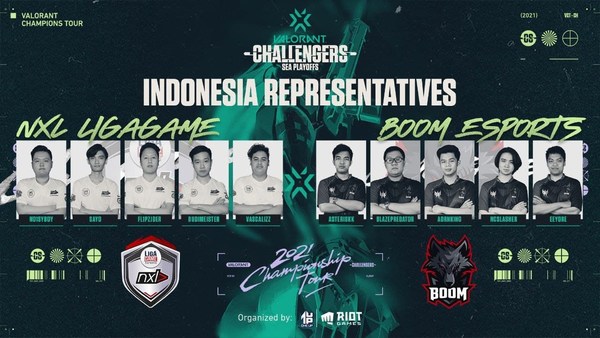 Both NXL LIGAGAME and BOOM Esports had shown their best gameplay on the VCT tournaments where both defeating BIGETRON ASTRO, ALTER EGO and MORPH IMPACT that were also the strongest teams in Indonesia. Both NXL LIGAGAME and BOOM Esports were also the Indonesian representatives for VCT Regional SEA Masters 1 in March earlier, which had showcased their consistency in giving the best performance.

Edwin, VP Business Development One Up, said, "This is a new record for both of the teams, NXL LIGAGAME and BOOM ESPORTS who had shown consistency in performance on the official VALORANT Champions Tour tournaments in Indonesia. We are beyond proud of what both teams had achieved, as well as other players who had actively participated. This proves that the Indonesian FPS ecosystem is on the rise and also could grow bigger and stronger."

"It is exciting to see how well Indonesian teams have performed in the VALORANT Champions Tour so far. And with Indonesia set to host the upcoming VCT Stage 2 – Challengers SEA – Playoffs, we are confident that they will set the standard for FPS tournaments in the country. We look forward to continuing our work with One Up to bring the Indonesian esports scene to the next level and provide a platform for local teams to showcase their skill and gameplay," said Chris Tran, Head of Esports of Riot Games Southeast Asia, Taiwan, Hong Kong and Macau.

Visit our webpage https://valorant.oneup.co.id/ and Instagram @valorantindonesia_1up for live updates and more details regarding VALORANT official tournaments in Indonesia.