Players will encounter various characters from the original animation in an exciting variety of ways.

Take part in an open commemorative in-game attendance event with full of fun! 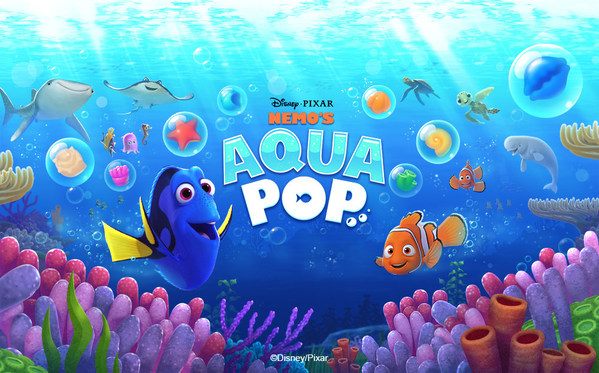 ‘Nemo’s Aqua Pop’ is a mobile Match-3 game based on Disney and Pixar’s popular animation "Finding Nemo". In this game, players will encounter multiple characters from the original animation, such as "Nemo", "Dory" and "Mr. Ray", who appear in special block skills and effects, by decorating their own underwater world and through collecting a variety of fish.

Together with the release of the game, Wemade Play has prepared 500 "Nemo’s Aqua Pop" puzzle levels, 200 missions, 12 characters from "Finding Nemo" and "Finding Dory", etc. In addition, there is a rich variety of difference game modes such as a first-come, first-served puzzle solving game, short competitive battles of less than an hour, and 3-5 days of teamwork competitions catering the best experience to all kinds of puzzle game fans.

Wemade Play Team Leader Hyeon-jin Shin stated, "’Nemo’s Aqua Pop’ combines the latest technology in puzzle game development with original animation content and themes. It is a game that satisfies both puzzle game and animation fans. We will prepare the best service, data updates and events."

Wemade Play is hosting an attendance event to mark the opening of "Nemo’s Aqua Pop". Just by logging in to the game, players may get free gold coins, infinite hearts, special blocks, characters and more. The event is planned to continue till September 31.