G.I. JOE will be battling for survival in Puzzles &Survival for a limited time starting today

GUANGZHOU, China, May 6, 2022 /PRNewswire/ — Puzzles & Survival, the smash-hit apocalyptic match-three game published by 37 GAMES, is playing host to an epic limited-time crossover event featuring G.I. JOE, the iconic action figure brand from Hasbro. Fan favorite heroes and villains from G.I. JOE and Cobra, including the legendary ninja characters Snake Eyes and Storm Shadow, will join the battle for survival against the ruthless zombie horde. Choose one side in this epic battle, glimpses of which can be seen in a recently released cinematic trailer, and help decide the future of humanity.

G.I. JOE fans won’t want to miss out on the opportunity to join their favorite warriors in iconic battles in Puzzles and Survival. How fans do so is entirely up to them, as they will be able to decide for themselves where their allegiance lies. Easy as that may sound, that decision may prove somewhat challenging considering what both options entail. Should they ally with the good guys, they’ll find themselves teamed up with the eponymous hero, the mysterious ninja-commando known as Snake Eyes, and Scarlett, the highly competitive field operative. However, they will also find themselves battling against Cobra, the overpowering force of evil whose ranks boast the remarkable ninja otherwise known as Storm Shadow and Baroness, the master of manipulation. 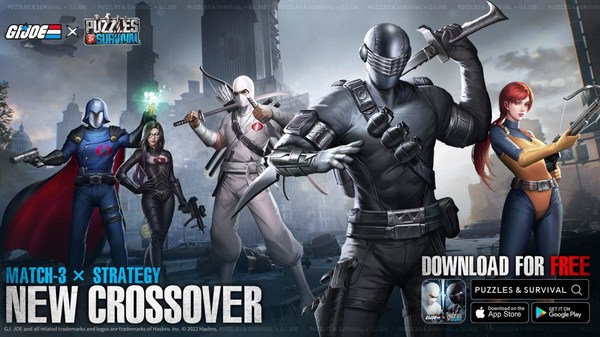 The heat of battle is often enough to make anyone reassess their loyalties. This sentiment will doubtless ring true as G.I. JOE and Cobra find themselves embroiled in exciting battles during this extraordinary crossover event. Indeed, surprises await those involved in the G.I. JOE mission bid to destroy H.I.S.S. tanks that suddenly pop up out of nowhere as Cobra’s Scheme comes to fruition. Likewise, there is no telling the toll that will be incurred as G.I. JOE and Cobra bid to obtain the crucial nanohexes needed to detonate tiles during the Base Trial, with the G.I. JOE themed marching skins and stickers available to win.

Obtain and Claim the Free Supplies Needed to Crush Cobra

Players will need all the supplies they can get their hands on if they‘re to succeed in battle, that’s why the G.I. JOE base will be opened to anyone who enlists. Here they can obtain the G.I. JOE-themed crates, keys, and supplies that will be crucial to their success in both the previously-mentioned events and in their bid to Restore G.I. JOE’s Memory, Decode Intelligence, and Colorize G.I. JOE’s Poster, all of which will be crucial to the war effort.

However, before players can do that, they may need a helping hand when they initially join the war between G.I. JOE and Cobra. For that reason, it might be wise to claim a few free supplies by using the "PNSJOE" and "PNSCOBRA" gift codes before they engage the enemy. Meanwhile, don’t forget to follow the official Puzzles & Survival Facebook fan page to stay up to date with the latest news, updates, and giveaways, all of which could prove crucial in their bid to do what they think is right.

G.I. JOE is a trademark of Hasbro used with permission.
About Hasbro
Hasbro (NASDAQ: HAS) is a global play and entertainment company committed to making the world a better place for all children, fans and families. Hasbro delivers immersive brand experiences for global audiences through consumer products, including toys and games; entertainment through eOne, its independent studio; and gaming, led by the team at Wizards of the Coast, an award-winning developer of tabletop and digital games best known for fantasy franchises MAGIC: THE GATHERING and DUNGEONS & DRAGONS.
The Company’s unparalleled portfolio of approximately 1,500 brands includes MAGIC: THE GATHERING, NERF, MY LITTLE PONY, TRANSFORMERS, PLAY-DOH, MONOPOLY, BABY ALIVE, DUNGEONS & DRAGONS, POWER RANGERS, PEPPA PIG and PJ MASKS, as well as premier partner brands. For the past decade, Hasbro has been consistently recognized for its corporate citizenship, including being named one of the 100 Best Corporate Citizens by 3BL Media and one of the World’s Most Ethical Companies by Ethisphere Institute. Important business and brand updates are routinely shared on our Investor Relations website, Newsroom and social channels (@Hasbro on Twitter, Instagram, Facebook and LinkedIn).