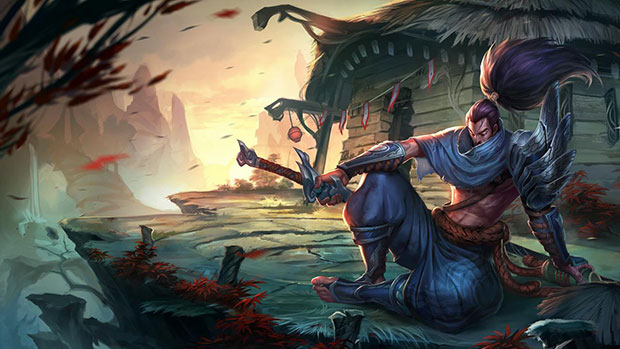 Yasuo, the Unforgiven, is League of Legends’ Latest Champion

Riot Games have revealed the next champion to enter the fray of League of Legends – Yasuo, the Unforgiven. Yasuo is a “sustained damage fighter with high mobility, strong utility, and damage output that ramps up the longer he survives in combat”. According to his lore text, Yasuo is “a former member of an Ionian martial school and the only student to have mastered a legendary wind technique”.

Riot has said that they mean for him to be used as a mid-laner because, according to them, it’s the safest lane to farm in so Yasuo can build up his experience and items. Most of his abilities have multiple mechanics making him very versatile and able to hold is own in both duels and team fights.

His Passive ability is called Way of the Wanderer which has 2 mechanics – the first is called Intent which passively doubles his critical strike chance and the second, named Resolve, gives him a Flow meter that fills up as he moves. The faster Yasuo moves moves, the faster his Flow meter fills up. And when his Flow meter is full, he gains a short-duration shield after he takes damage from enemy champs and minions.

His second ability is called Wind Wall. Wind Wall has 2 mechanics with the first being a passive that also works in conjunction with Sweeping Blade in which using Sweeping Blade also fills up his Flow meter. The second and active mechanic allows Yasuo to create a wall of wind that slowly moves forward and blocks all enemy projectiles for a few seconds.

His Sweeping Blade ability is a skill shot that, if landed, makes Yasuo dash towards the enemy target damaging them and marking them for a few seconds. Consecutive Sweeping Blades do more damage up to a cap but Yasuo cannot use Sweeping Blade on targets that are already marked.

Yasuo’s ultimate ability is named Last Breath. When an enemy champion is airborne, using Last Breath suspends that enemy and all other airborne enemies mid-air as Yasuo damages them. After landing, Yasuo gains a large armor penetration buff that affects enemies’ bonus armor for an extended period of time.

There is no official release date from Riot  but Yasuo is already being played on the League of Legends PBE (Public Beta Environment) servers so he should be released soon.

The folks at SkinSpotlights have posted a short video that previews Yasuo’s abilities, which you can watch below: