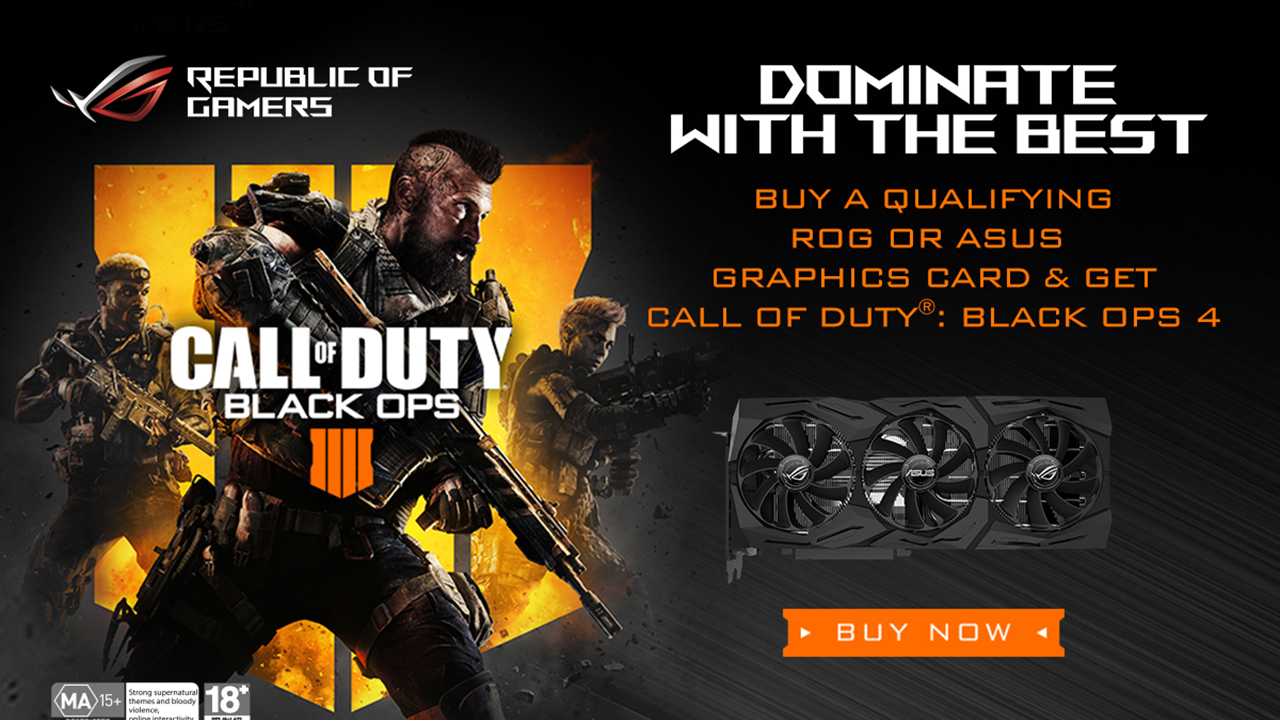 Get Call of Duty: Black Ops 4 for Free With Your ASUS or ROG Graphics Card

ASUS has announced a partnership with Activision to give buyers of eligible ASUS and ROG graphics cards from select retailers a free code for the PC version of Call of Duty: Black Ops 4, the latest installment in the long-running Black Ops series under the Call of Duty franchise.

The game bundle promotion runs from September 10, 2018 to December 31, 2018, or until supplies last. But the redemption stretches up until January 10, 2019 to give people a bit more time to register their products and claim their codes. Those who are able to redeem their code for the Digital Standard Edition of Call of Duty: Black Ops 4  on PC will have until April 12, 2019 to use them.

“ASUS Republic of Gamers and Activision have enjoyed great successes over many years, within their respective markets, and we are excited to bring the two together. ROG consistently delivers great gaming experiences by working closely with partners and publishers, both on the technology side and on the business side. We’ve collaborated with the eSports teams we sponsor to gain unique insight to provide leading performance and game-ruling innovation. And, similarly, we worked closely with Activision to integrate our RGB-lighting technology, AURA Sync, into this latest version of Call of Duty, to further enhance gameplay. Now, we’re pleased to deliver eligible ROG products bundled together with one of the most anticipated titles of the year, Call of Duty®: Black Ops 4 on PC.”

Here’s the complete list of ASUS and ROG graphics cards that are eligible for the promotion:

Here’s the list participating dealers where fans can purchase the eligible graphics cards from:

Those who purchase any of the eligible graphics cards from any of the participating retailers will need to go to the promo website to register their purchase (you will need your purchase receipt and the serial number of the graphics card you purchased) and go through the process of claiming their free code for the PC version of Call of Duty: Black Ops 4.