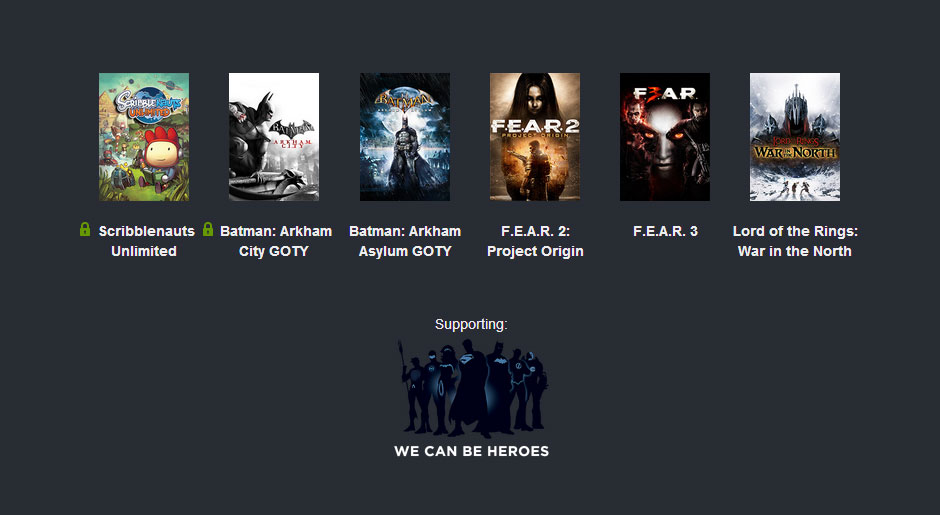 The folks over at the Humble Bundle have published another awesome bundle – the Humble “WB Games” Bundle – in support of DC Entertainment’s “We Can Be Heroes” giving campaign.

The bundle includes a slew of games from Warner Bros. Games including Batman: Arkham Asylum Game of the Year Edition, F.E.A.R. 2: Project Origin, F.E.A.R. 3, and Lord of the Rings: War in the North. Bundle buyers who pay more than the current average price will also receive Batman: Arkham City Game of the Year Edition as well as Scribblenauts Unlimited.

When purchasing the bundle, buyers can choose how to divide their payment between the developers, the “We Can Be Heroes” charity, and the Humble Bundle tip. All of the games in the bundle will  be redeemable on Steam for Windows (Batman: Arkham City is also available for Mac).

The Humble Bundle guys/gals have also released a video for the Humble “WB Games” Bundle which you can view below:

Lastly, if you’re in a giving mood but don’t have the means to purchase the bundle, we’ve decided to give on your behalf by purchasing one “All to Charity” bundle and giving it away right here. Just check out the Rafflecopter box below to see how you can get a chance to receive the bundle from us. (Note: The giveaway starts at 12mn)