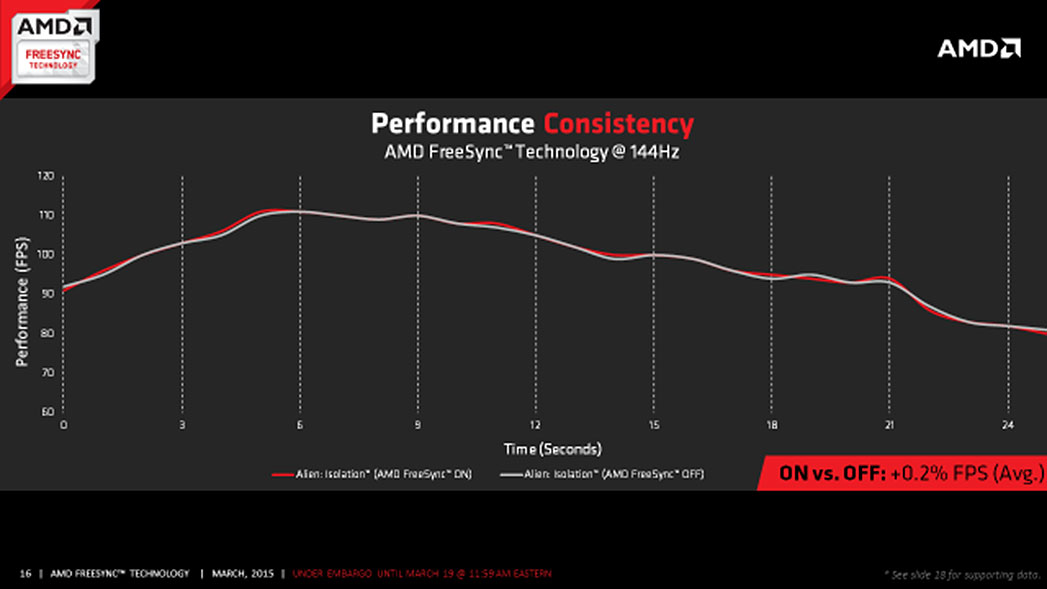 Robert Hallock, AMD’s technical marketing manager, wrote an article on the company’s latest FreeSync technology that’s meant to help monitors better perform in highly demanding operations such as gaming. In the article, he talks about the benefits of FreeSync, the purpose behind the name, and the monitors that’ll work with FreeSync.

FreeSync was originally unveiled by the company last January when it announced that several companies including BenQ, Samsung, LG, and ViewSonic, among others were working on FreeSync compatible monitors. AMD officially launched FreeSync earlier this week with the distribution of new Catalyst Drivers that support the new technology.

We’ve attached the article below but you can find the original link here.

No stuttering. No tearing. No extra costs. Just smooth gaming. Those are pretty straightforward and reasonable requests from gamers, right? Today it becomes reality with our latest AMD Catalyst™ driver release. This is our first driver with AMD FreeSync™ technology enabled, and I’m happy to report that there are FreeSync technology-enabled monitors shipping or are about to ship imminently. Should this be your first encounter with AMD FreeSync technology, please make sure you check this out first to learn about how it works! You can also find more information on our website.

Speaking of monitors
Below you’ll find a chart with all of the AMD FreeSync technology-compatible monitors announced to date. I’ve had the pleasure of playing around with a few of them, and they’re more than worth your consideration. You may prefer the Acer or BenQ’s 1440p models that have a wide refresh rate range (40-144Hz). Alternatively, proponents of IPS panels or ultra-wide aspect ratios would be keen to check out the 29” or 34” options from LG. And more monitors are on their way. Up to 20 monitors supporting AMD FreeSync technology are in the pipe for 2015, in fact!

Now, think back to when you saw your first HD video—it was difficult to be satisfied with standard-def content. It was for me, anyhow. That’s how I feel about gaming on AMD FreeSync technology. I always disliked tearing and stuttering, but I couldn’t do much about them with yesterday’s technologies. AMD FreeSync technology changes the game, fixing both tearing and stuttering with smooth gameplay at virtually any framerate. I can now dial up the detail without worrying about whether or not I’m sacrificing smoothness, and I find it difficult to game on normal monitors now. 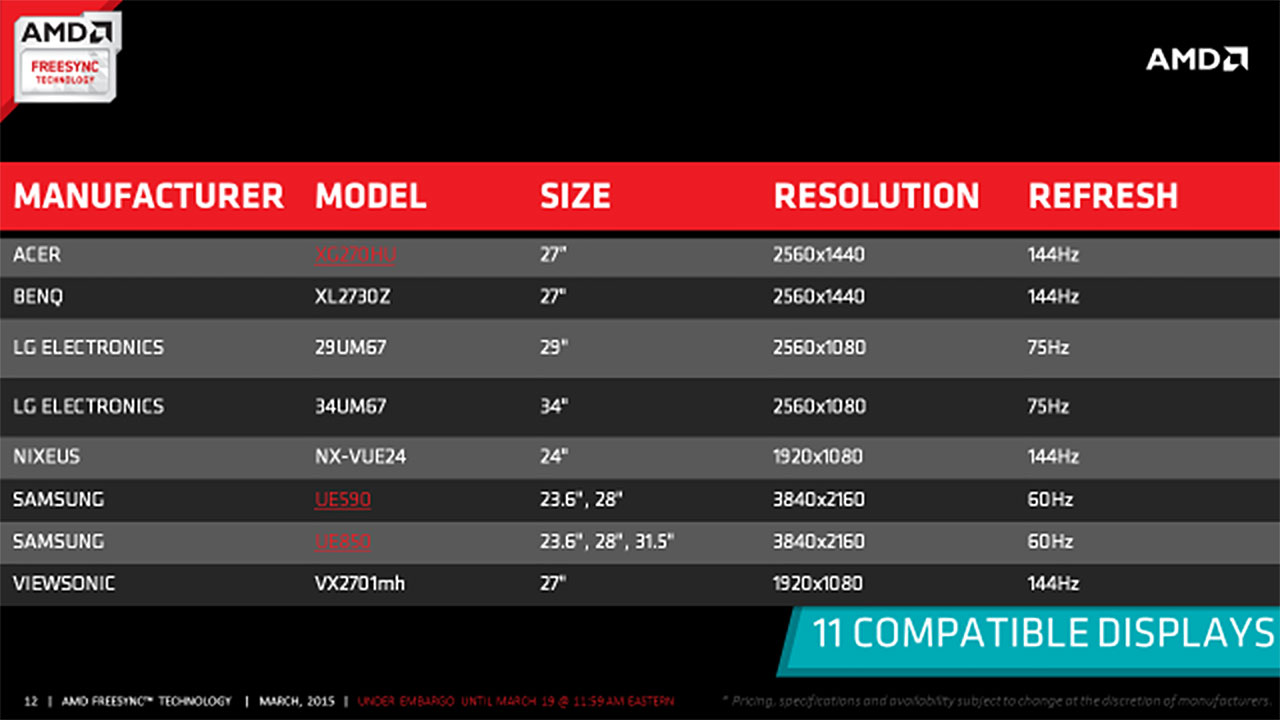 The definition of “free”
AMD FreeSync technology costs virtually nothing for a monitor manufacturer to adopt. Most of them already had the relevant components in their supply chains, but needed the right software to come along to expose latent capabilities. With the help of VESA, the DisplayPort Adaptive-Sync specification was born to do exactly that.

DisplayPort Adaptive-Sync has no unique material or licensing costs, and AMD FreeSync technology builds on top of that industry standard to give gamers a benefit in all of their games.

No licensing. No proprietary hardware. No incremental hardware costs. As some might say: “free as in beer.”

All of these savings are reflected in the price tags. Several of the displays announced by our technology partners are up to hundreds cheaper than comparable displays featuring our competitor’s dynamic refresh technology. Other displays, like the ones from LG, are actually cheaper this year with AMD FreeSync than comparable models were last year without. This is the advantage from doing technologies the right way: as open standards with low and inexpensive barriers to entry. You’ve heard that from us time and time again, but it rings true with AMD FreeSync.

For twitch FPS gamers
We heard you guys loud and clear: Vsync isn’t enough. You don’t want it because it limits framerates, and that limits opportunities for the freshest mouse data to reach your eyeballs. Call it what you will: mouse lag, input latency, whatever. With AMD FreeSync™ technology, we uniquely give you the opportunity to turn Vsync off when the framerate of the application leaves the dynamic refresh range supported by the monitor.

So, if you have one of those 144Hz BenQ or Acer displays, but you’re a Counter-Strike: Global Offensive player that wants to run at 240 FPS… you can! You still get beautifully smooth, tearing-free gameplay from 40-144Hz with those monitors, but you don’t have to sacrifice your input latency to get it when the framerate goes to 145+.

Below you can see a conceptual example of this relationship. In this theoretical exercise, the red line reflects framerates and input latency of an application Vsynced to 60Hz, and the blue line demonstrates the superior framerates and mouse latency of a game unrestricted by Vsync.  This is a hypothetical scenario, and you’ll want to tinker with your favorite game, but AMD FreeSync actually gives you the choice—the competition doesn’t. 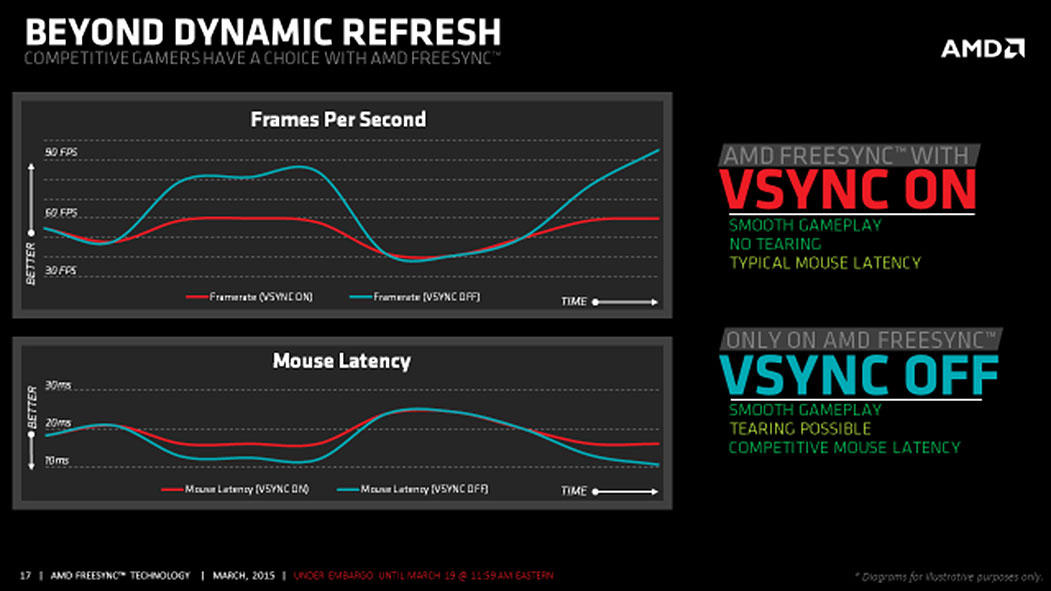 Wrap up
AMD FreeSync technology is free of incremental hardware costs, free of performance penalties, free as a standard, open for use by anyone in the gaming industry, and unbelievably smooth framerates are I-can-never-go-back-to-the-old-way incredible for PC gaming.

It’s hard to go wrong. What monitor will you buy?

Robert Hallock is Technical Marketing Manager for AMD. His/her postings are his/her own opinions and may not represent AMD’s positions, strategies or opinions. Links to third party sites are provided for convenience and unless explicitly stated, AMD is not responsible for the contents of such linked sites and no endorsement is implied.