The new, next-generation 1000-series of GPUs from NVIDIA, featuring the company’s latest Maxwell architecture, is finally here and leading the charge is the flagship GeForce GTX 1080 which is said to be even more powerful than last generation’s high-end GeForce GTX Titan. One of the world’s more popular partner manufacturers, Zotac, took the GTX 1080 to an even higher level when they announced their AMP Extreme edition of the powerful card which features a humongous custom cooler and factory overclocked GPU and memory. We took the Zotac GeForce GTX 1080 AMP Extreme for a spin to see just how powerful this Zotac-flavored flagship card is.

To say that the GTX 1080 AMP Extreme is huge is an understatement. Not only is the PCB of the card noticeably large but the custom cooler and back plate which Zotac slapped onto it will definitely not go unnoticed on your rig. For reference, the card is around 20% larger than the reference Founder’s edition of the GTX 1080. It measures 12.8 inches long and takes up 2.5 slots on your motherboard. The cooler, which the company calls the Ice Storm Cooler, features a large metal shroud that comes in a simple grey color scheme with a few portions that feature a look similar to carbon fiber. The cooler features a triple-fan configuration that utilizes the Zotac’s EKO design fans, 6 copper heat pipes, and two large heat sinks. The metal back plate of the GTX 1080 AMP Extreme features a design that’s remarkably different from the cooler and shroud. It extends over the side of the card’s PCB and features a more industrial design aesthetic with a touch of yellow and white added to the greenish-grey color scheme. The back plate is emblazoned with Zotac’s logo as well as a Push the Limit slogan which lights up. The logo on the side of the card as well as the areas around the fans also light up using the company’s RGB Spectra LED lighting system which lets you choose from seven different colors and a few lighting modes. 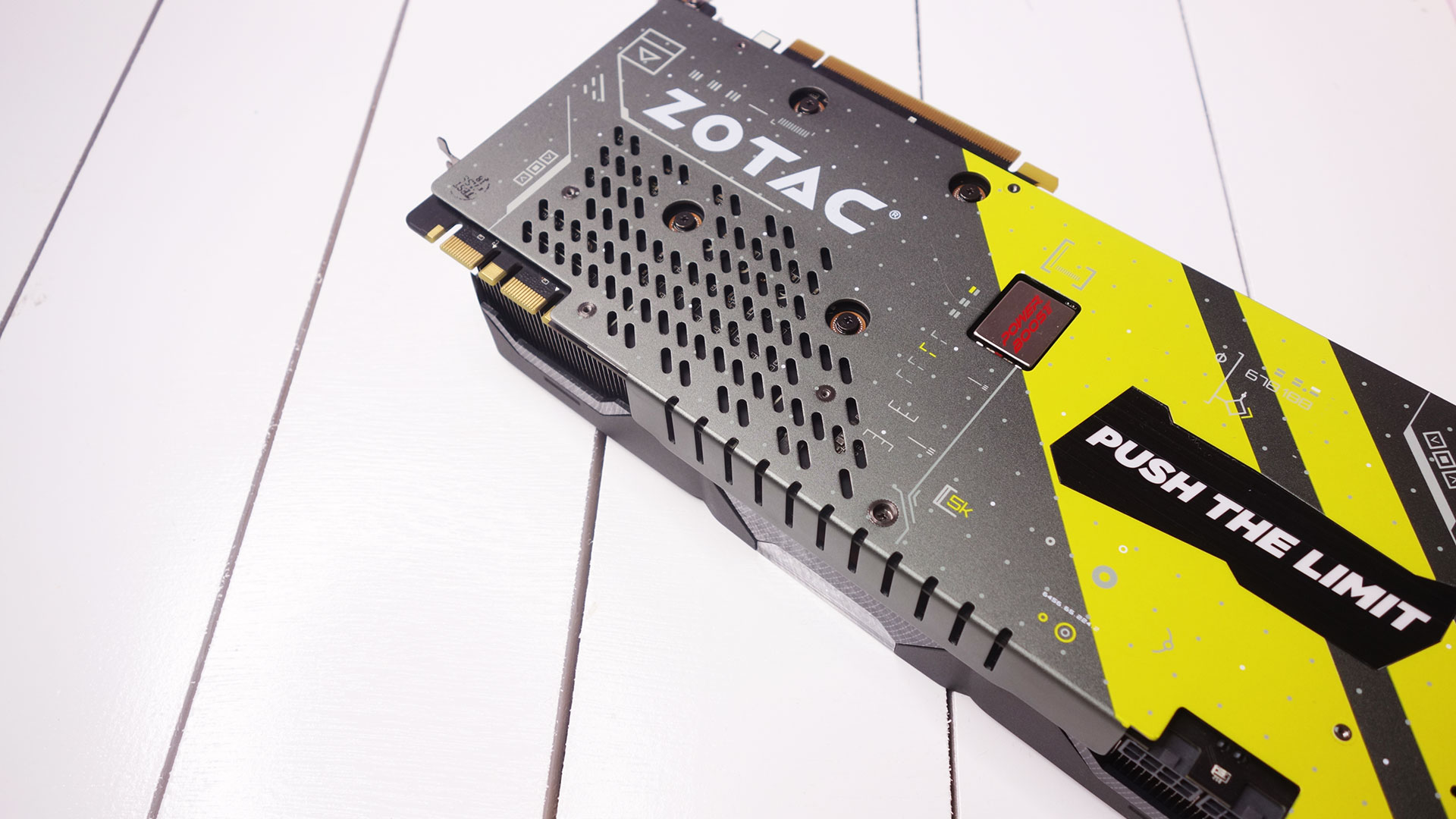 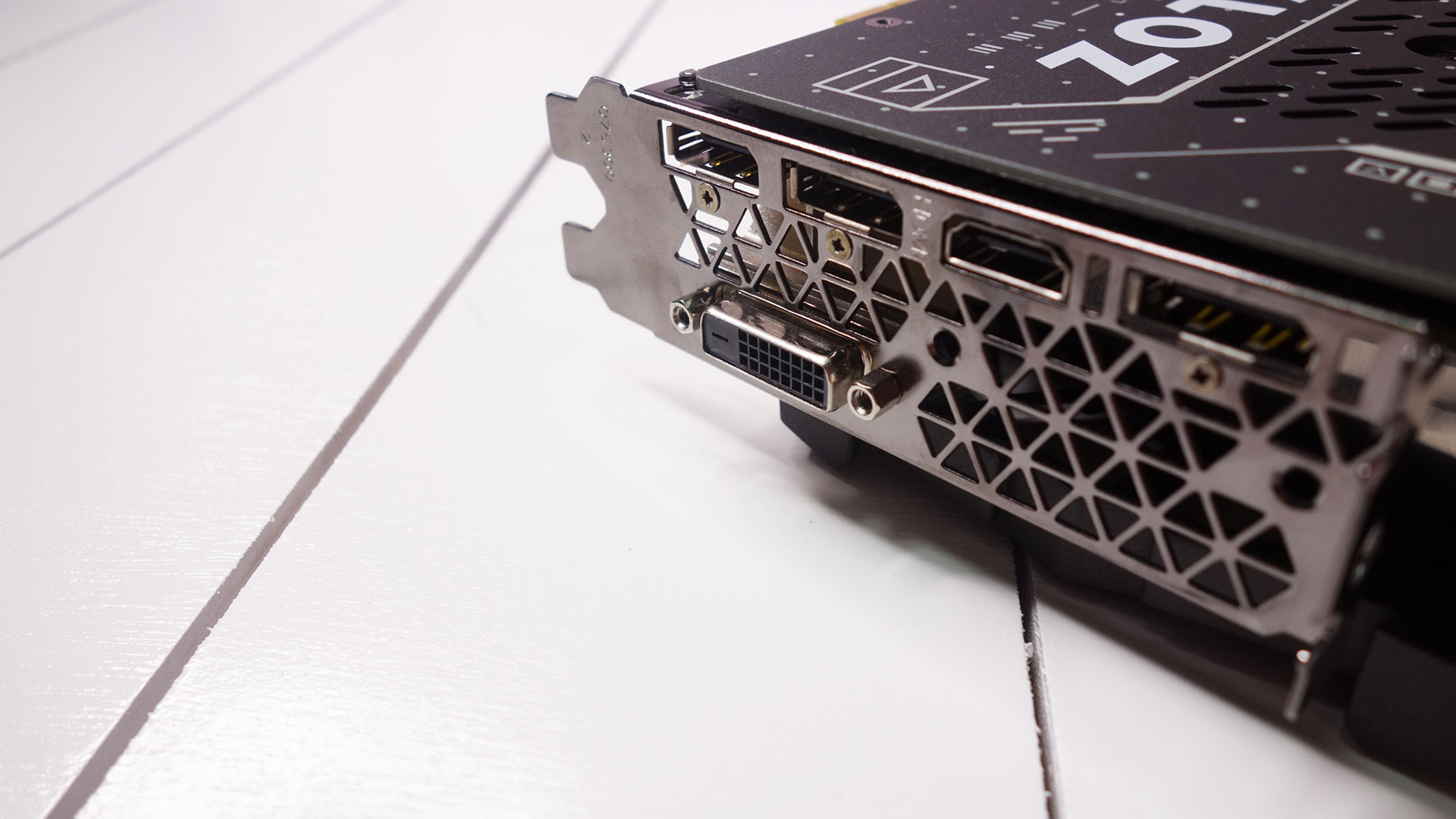 The GTX 1080 AMP Extreme features several connector types on its back panel including three DisplayPort 1.4 connectors which all support up to 8K resolution at 60Hz, one HDMI 2.0 port which supports up to 4K at 60Hz, and one dual-link DVI-D which supports up to 3K. With the large cooler and amount of customization that’s featured on the GTX 1080 AMP Extreme, the card requires at least a 500W PSU and two 8-pin power connectors. The power connectors feature an LED which indicates whether the power connectors are connected properly or not. The AMP Extreme also comes with two 6-pin to 8-pin PCIe power adapters for those with PSUs that lack 8-pin connectors. Lastly, there are two NVIDIA SLI connectors on the side of the card for multi-GPU setups. The new SLI connectors on the GTX 1080 support SLI High Bandwidth which doubles the bandwidth of the SLI connection from 1GB/s to 2GB/s. The new SLI High Bandwidth bridges are sold separately.

Like with the other GTX 1080 cards in the market, the GTX 1080 AMP Extreme features the company’s GP104 GPU, which utilizes a 16nm process and is based on NVIDIA’s new Pascal architecture, as well as 8GB of GDDR5X graphical memory. Zotac has ramped up both the GPU and memory clocks on the AMP Extreme to a base clock of 1771MHz with a boost clock of 1911MHz and a memory clock of 10.8Gbps. It also features 2560 CUDA cores, a 256-bit memory bus, a digital 8+3 phase design, an independent heatsink for the VRM, PCIe 3.0 connectivity, and support for both DirectX 12 and OpenGL 4.5. 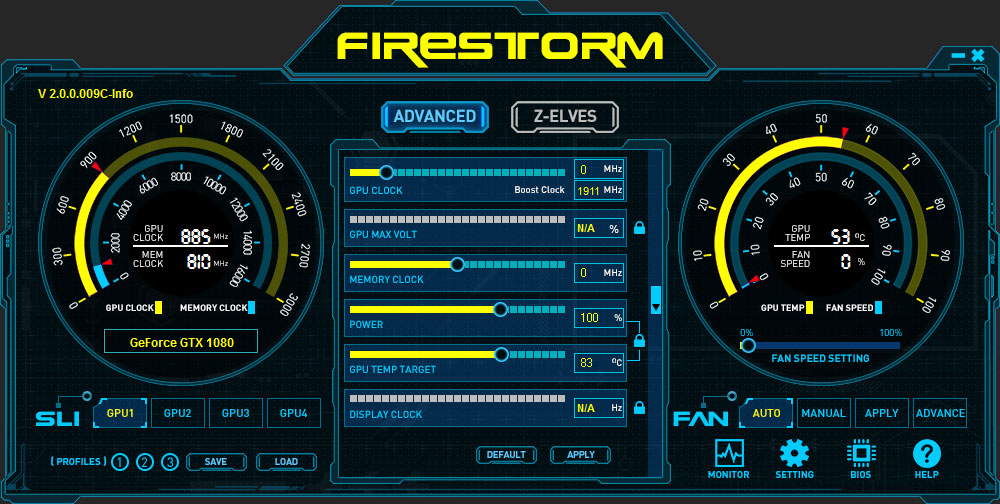 The GTX 1080 AMP Extreme is compatible with Zotac’s FireStorm utility software which allows users to adjust all of the card’s settings in one app including further overclocking the AMP Extreme’s already boosted clocks, adjusting the Ice Storm cooler’s fan speeds, and customize the card’s Spectra LED lighting. The FireStorm app also lets users monitor the cards core and memory clocks, voltage, temperature, and load. In the Advanced section of the FireStorm app, you’ll be able to adjust the cards GPU Clock, GPU Max Voltage, Memory Clock, Power, GPU Temperature Target, and more. You’ll also be able to choose which color among the seven available the Spectra LED lights will output; their lighting mode which include static, breathing, strobe, and cycle; and their brightness. You also completely switch off the different lights independently for those who have setups in places that can’t be too bright. Lastly, up to three profile settings can be saved on the FireStorm app for easy switching between overclock and lighting settings. 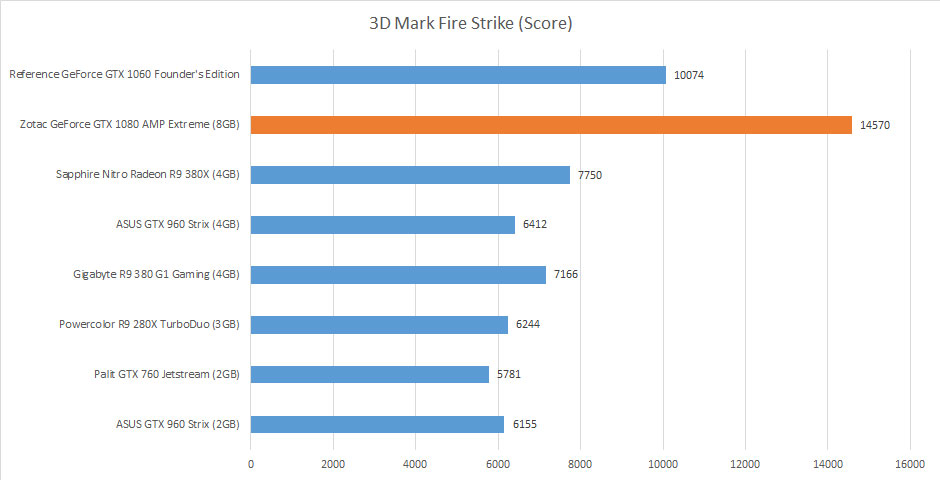 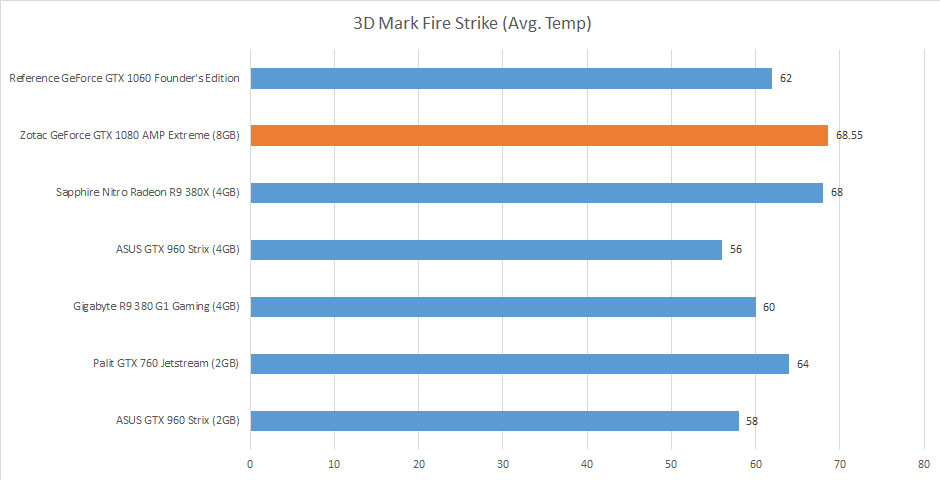 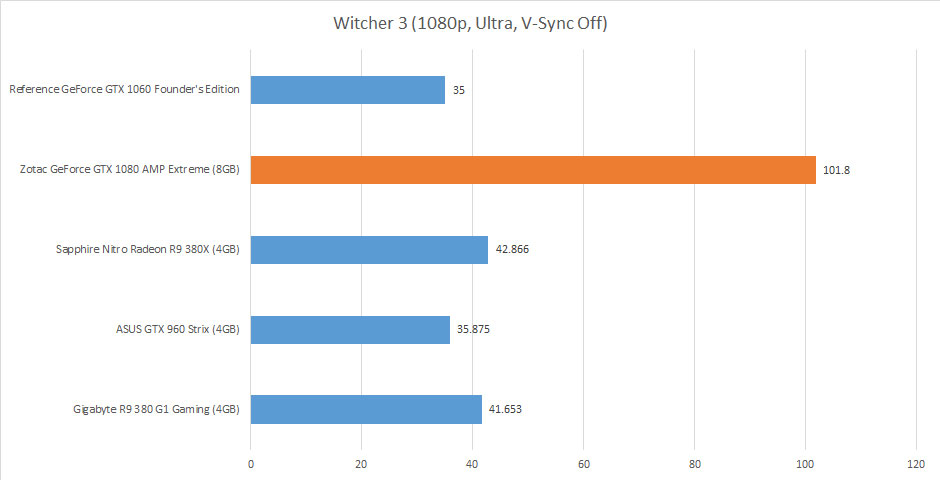 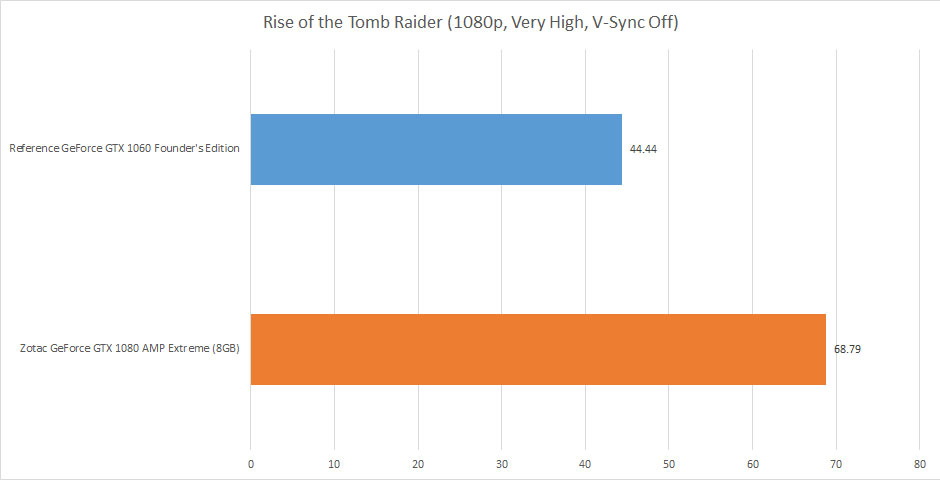 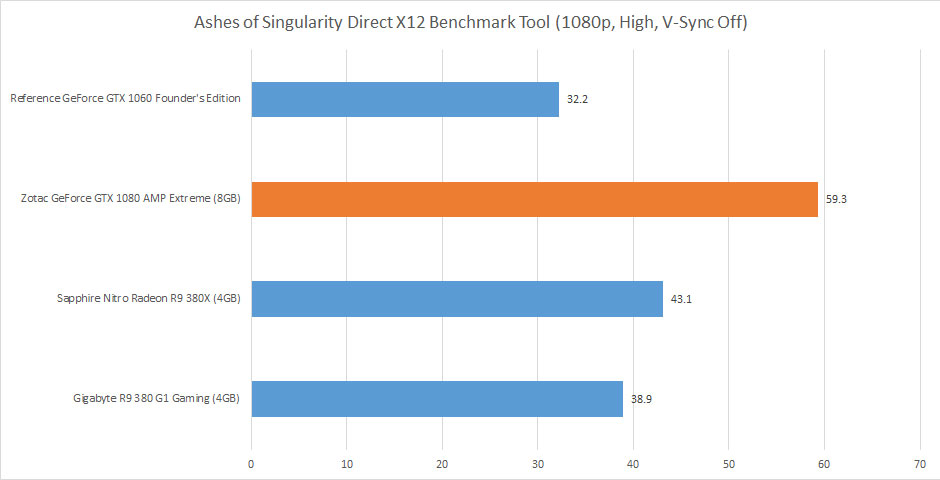 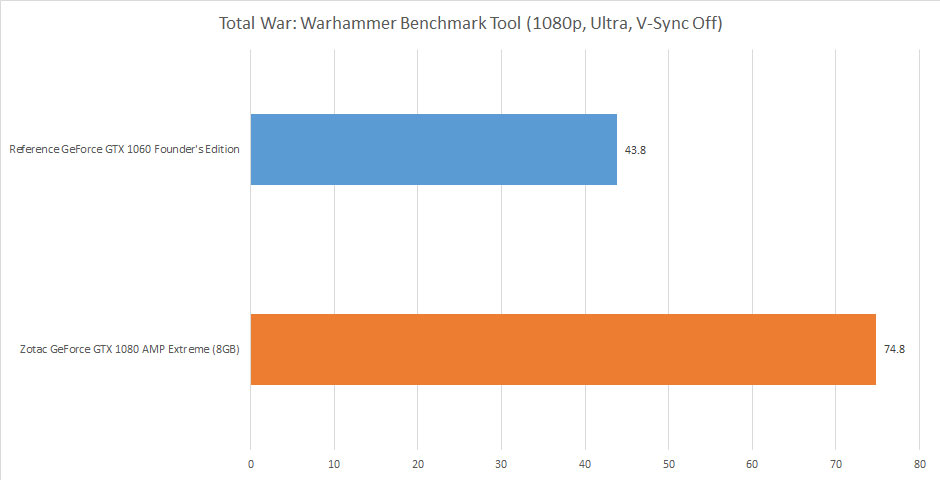 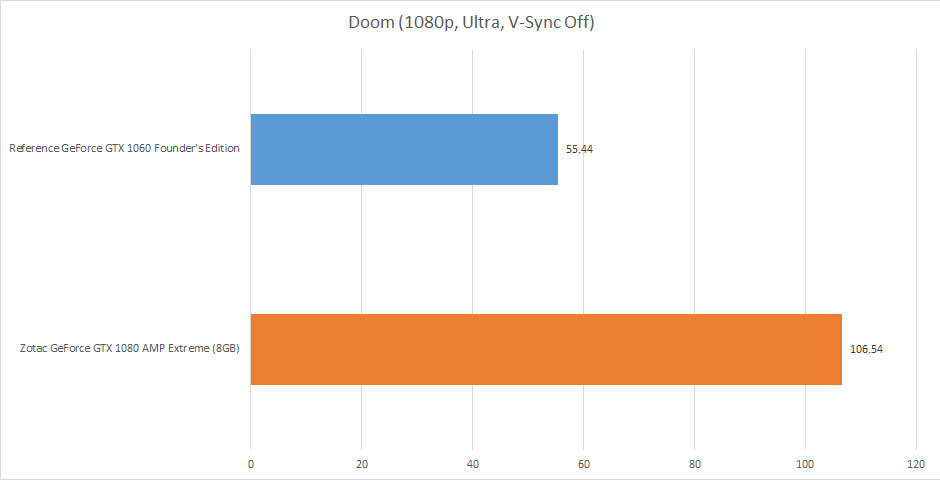 To put it simply, the GTX 1080 AMP Extreme pretty much destroyed every test or game we put it through. In 3D Mark’s Fire Strike benchmark test, the GTX 1080 was able to score a whopping 14750 which was almost or more than double the score of many of the cards we’ve previously tested. It also reached an average temperature of 68.55 degrees during the Fire Strike test which is incredibly impressive given how much power the card churns out, a testament to how good Zotac’s Ice Storm cooler is. As for how much noise it generates, even while running our benchmark tests the Ice Storm cooler was barely audible especially in a room with running air-conditioning. The GTX 1080 AMP Edition also ran all of our games excellently, easily running most games at over 60 FPS at 1080p with settings at their highest. It was even able to achieve a near 60 FPS framerate on Ashes of Singularity, a game known to really drive graphics cards to their limits. Suffice to say, the GTX 1080 AMP Edition will run any currently available and future games for the next few years at a framerate of at least 60FPS when running at 1080p.

Overall, the Zotac GTX 1080 AMP Extreme is one monster of a graphics card both in size and performance. Not only is it aesthetically impressive with its metal shroud and back plate but it also comes with a slew of great features such as its Ice Storm cooler, Spectra LED lighting, and FireStorm software. Performance-wise, the GTX 1080 AMP Extreme pretty much destroyed every benchmark test or game we put it through, all at an impressively cool temperature and very minimal noise, showing off just how powerful this card is. While the price tag of the GTX 1080 AMP Extreme may be pretty steep for some at around Php38,000, those who can afford it or choose to buy it will find themselves more than satisfied with their purchase. Right now, the GTX 1080 is definitely the most powerful single-card solution in the market and Zotac’s AMP Extreme variant is undoubtedly one of the best.