Network attached storage solutions used to be the domain of large enterprises and corporations as they were simply out of reach both technically and financially for home and small office users. But when WD released their first home NAS solution years ago, NAS solutions became accessible and affordable. Since then WD has released a slew of NAS devices for both home and small office use and one of their latest models is the My Cloud EX2 Ultra, an updated version of the original EX2 the company released a couple of years ago. The EX2 Ultra, like its predecessor, is a two-bay NAS solution that comes with company’s My Cloud OS and is meant for those who want an affordable, redundant or large storage solution that was accessible anywhere within their network.

The EX2 Ultra looks almost exactly likes its older brother, the EX2, with the same matte grey plastic shell that curves around the front and sides of the body seamlessly. The EX2 Ultra is extremely compact and its design makes it discreet and unassuming in any home or office. The front features three LED lights that signify Power/Connectivity and activity for each of the two drive bays. The top cover and bottom of the EX2 Ultra features a ventilated design for heat dissipation. The rear keeps the same vent panel design as the top and bottom but without the actual holes and features a reset button, two USB 3.0 ports, an Ethernet port, a Kensington lock slot, and a power port.

The top cover is kept in place with a spring lock which can be easily released by pressing down on a thumb-sized depression on the device’s top cover. Opening it up reveals the EX2 Ultra’s two 2.5-inch drive bays. The drives of the EX2 Ultra are kept in place using a metal plate and easy-to-remove screw. Once the metal plate is removed the drives can be easily pulled out of the bays using the pull tabs that can be attached to the sides of each drive with screws that also keep the drives in place. The EX2 Ultra can either come with or without drives included but the variants that come with drives use WD’s Red drives that are specifically designed for NAS devices like the EX2 Ultra. 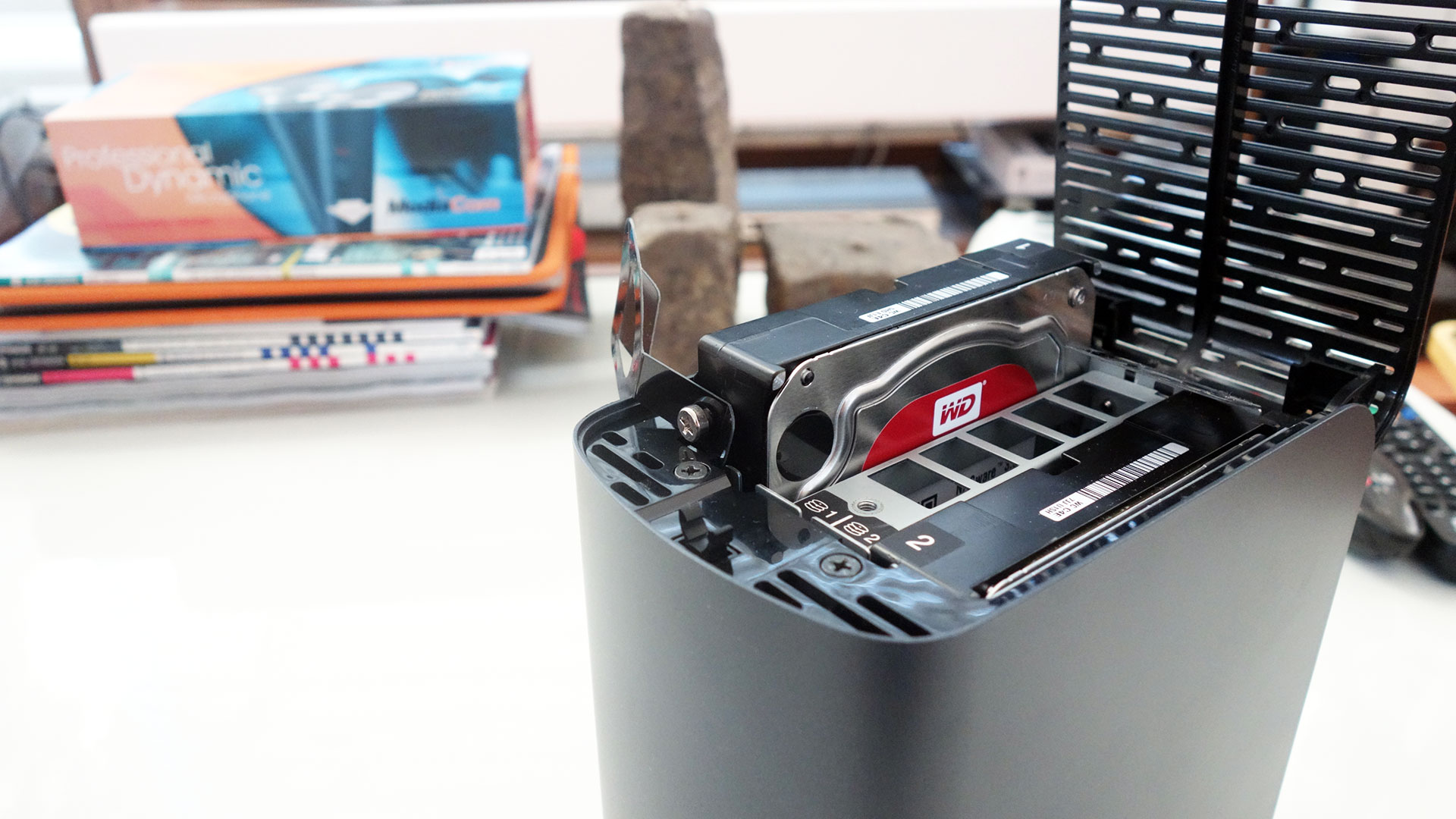 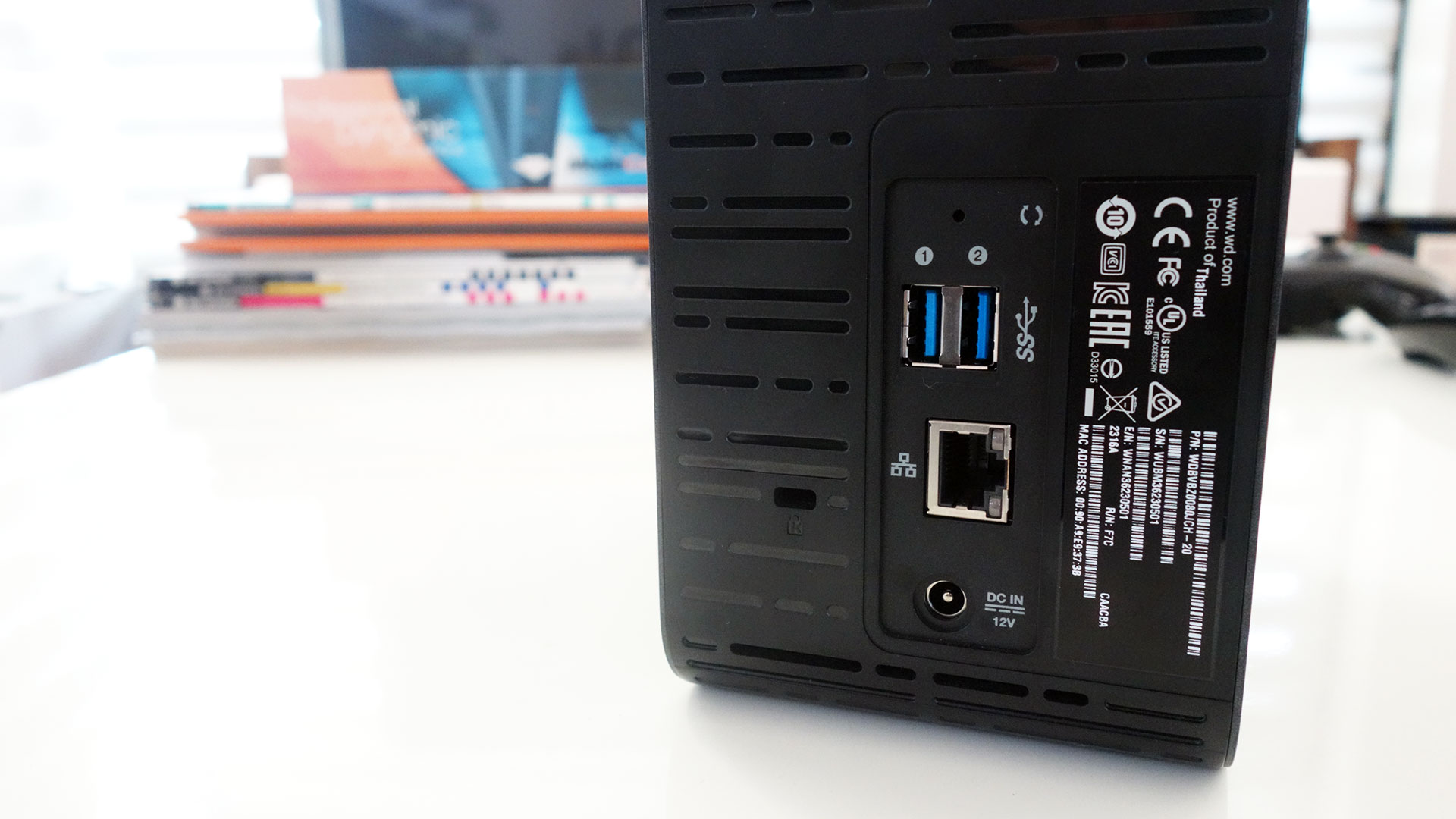 Just like its predecessors and the rest of the devices in the My Cloud line, setting up the EX2 Ultra is pretty easy and straightforward. Just plug in the power adapter (the EX2 Ultra comes with multiple plug options for different outlet types) and connect the EX2 Ultra to your home or office router via Ethernet cable. The EX2 Ultra will then be accessible directly on your network or remotely via the internet through either your browser or through the desktop or mobile applications for iOS and Android. WD also provides an easy-to-understand online user manual that takes users through all the steps to set up and use the EX2 Ultra.

Just like WD’s other My Cloud devices, the EX2 Ultra comes with the company’s My Cloud OS which is accessed via a web browser. My Cloud OS allows users to update the EX2 Ultra’s firmware, check on the device’s status, set up users and share folders, set up and configure access, adjust backup and RAID configurations, install apps, and control the rest of the device’s settings. The interface of the My Cloud OS was easy to navigate and the settings were easy enough to understand and adjust. While the My Cloud OS may seem limited to advanced users, regular consumers will find everything they’ll need to easily set up and configure the My Cloud OS.

Uploading and downloading files to and from the EX2 Ultra was pretty fast with single large file transfer speeds easily going above 100MB/s through a Gigabit or wireless AC connection while transferring multiple small files easily got transfer speeds of up to 80MB/s. Streaming media like movies and music from the EX2 Ultra either via LAN or WiFi was also a smooth experience with no issues whatsoever even when different media was streamed to multiple devices at the same time. Lastly, the WD Red drives that the EX2 Ultra come with were easily able to achieve Sequential read/write transfer speeds of over 100MB/s and Random 4K read and write speeds of just under 100MB/s and 50MB/s, respectively. 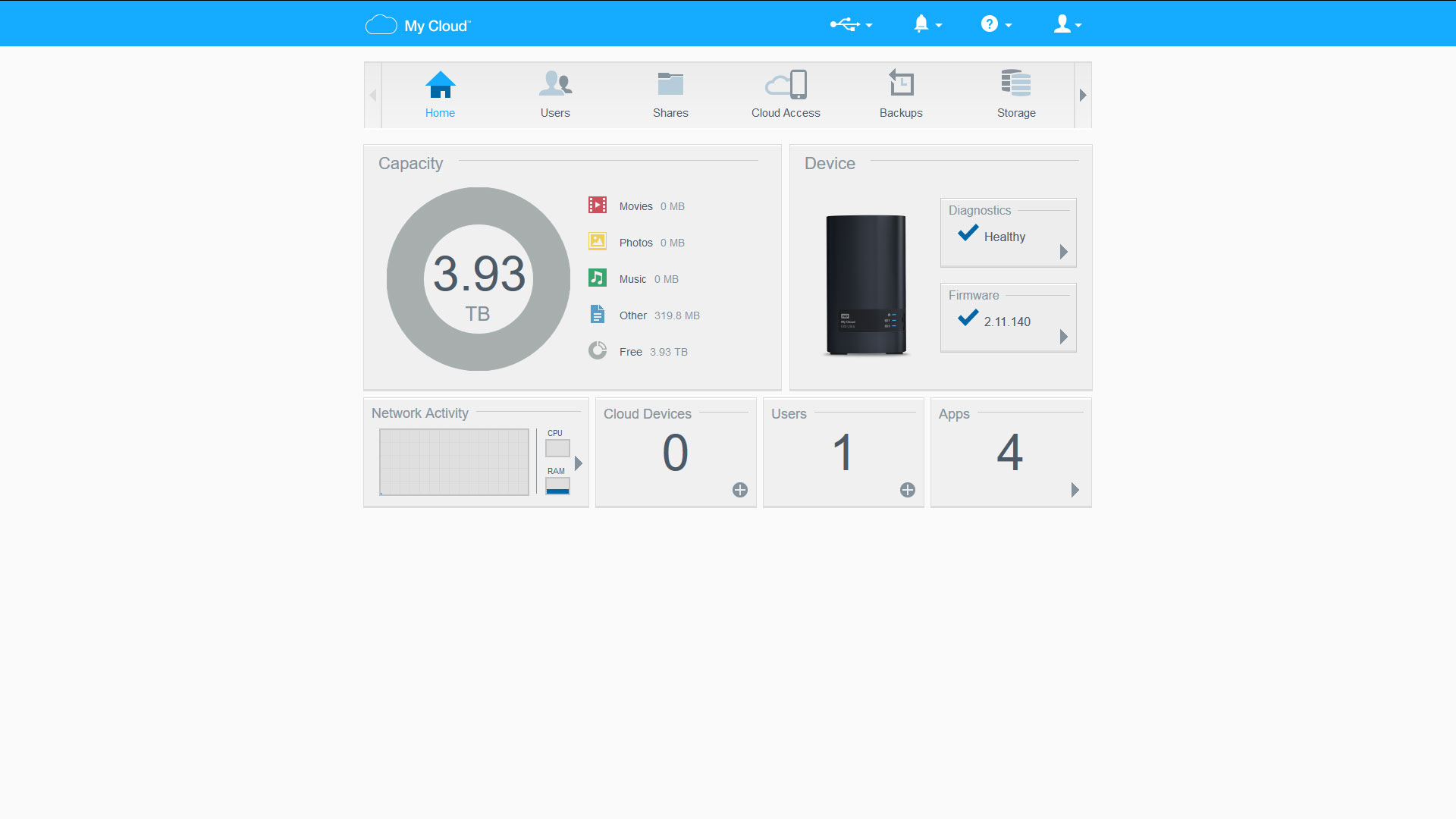 The My Cloud EX2 Ultra is a great addition to WD’s line of NAS devices and is a decent upgrade from its predecessor, the regular EX2. Setting it up and using it is easy and almost effortless especially with its My Cloud OS. It performs impressively well at all fronts from file transfers to media streaming. It’s also one of the best value NAS devices you can get in the mainstream market. It’s available in diskless, 4TB, 8TB, and 12TB variants. The EX2 Ultra is perfect for those who want a two-bay NAS drive for home or small office use for file storage and backup or as a media server and it is simply the best network attached storage solution in its price bracket.