Watch Dogs is exactly what you’ve been told — an open world game with hacking at its core. The game clearly draws its inspiration from games like Assassins Creed and GTA V but never does it surpass them. Watch Dogs is a great game no doubt, but it is not as polished as its forerunners.

You play the role of Aiden Pierce, a hacker turned vigilante after his hacking days causes the death of his niece.  You travel the city of Chicago trying to figure out who wanted to hurt your family and seek revenge. Along the way he meets a few fairly cliché characters to help him on his journey. Aiden himself is a bit of a dull drum, having only one emotional setting – vengeful with a raspy Batman-like voice.  The plot itself does have its moments, and when you really get invested into it, the story will get you hooked.

When you start driving around the city for the first time, you can’t help but compare it to GTA V and how small Chicago is compared to Los Santos, everything just feels cramped. But once you start noticing the details, you realize how much effort was given into making this city come to life. With things like random car accidents or pedestrians taking videos of a crime scene, things like these make the setting more believable. 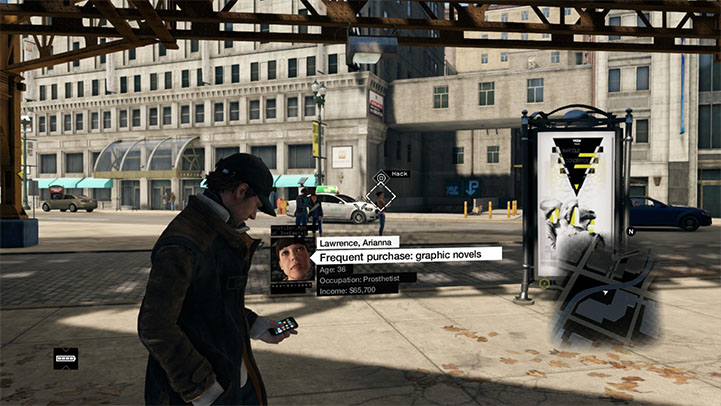 Graphically, the game looks stunning in some parts but then there are some complete head-scratcher moments like the reflections coming off mirrors or windows — if you look closely, they’re just the same image no matter what window or mirror you are looking at which seems a bit strange for a “next-gen” title to have these kinds of graphical issues. The PS4 version runs at 900p at 30FPS which does look great but the PC version looks better even if the game isn’t really optimized properly. Even with a substantial rig, the game would not run at a constant 60FPS.

Hacking, the core mechanic of the game, plays a very major part in making Watch Dogs unique. In this version of Chicago, the entire city is connected by one government-controlled network. Which of course, Aiden and his friends have hacked giving you access to the entire city. By using skill points earned through the game, you can hack certain elements of the city’s infrastructure to help with your getaways. Things like raising bollards or bridges, overloading a steam pipe for camouflage, or even hacking a stop light at an intersection to cause a massive accident.

During missions, hacking can also play a large part if you want to. For example, you need to gain access to a server room but an army of guards stands between you and it. You can either go in guns blazing and do some minimal hacking — lowering a forklift for cover, dropping a storage crate on top of a guard or even hacking his grenade so that it explodes — or get in purely by hacking which can be achieved without a single gunshot being fired. You hack cameras to get a better view of the area and you can jump to one camera to another as long as you have line of sight of the second camera. Sometimes you can even hack the camera on a patrolling guards phone to have a better look at the area. Once you hack the server, the mission is complete without any violence. The only sad part about doing this is that the game does not reward you for a full hack-only approach. You gain the same amount of experience points no matter what approach you choose. 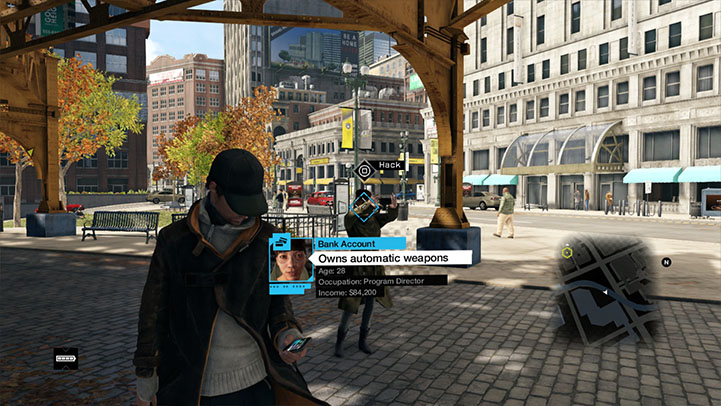 The controls of the game are a mixed bag. The gun combat is great, moving into and out of cover feels good and aiming is not a problem. The car controls on the other hand are a bit atrocious. Driving around in Watch Dogs just doesn’t feel right. The cars all seem really sluggish and it doesn’t have that same feeling of smoothness you get from other open world driving games. This can get quite frustrating since you spend a lot of time in cars driving from place to place or avoiding getting caught.

There are quite a lot of things to do aside from the main story line, you can check in at Hotspots, play mini games like chess or poker or go on a virtual trip and become a giant robot spider wreaking havoc on the city. There is also a lot of vigilante stuff you can do which pop up randomly around the map like stopping a mugging or raiding gang hideouts. Completing these events increase your reputation.

One of the biggest elements of the game which was heavily marketed was the seamless multiplayer. Similar to Demon Souls, it’s a drop-in style invasion of another person’s game. In one of the modes, the invader tries to hack the player’s data while the player must locate and kill the invader before the timer runs out. The entire experience is very well integrated with game making the invader look like a normal citizen to the invaded player’s game. The multiplayer modes are all integrated seamlessly to the single player experience popping up the same way vigilante missions would pop up. Participating in multiplayer is completely optional although there is a skill tree which gives you skills only accessible through multiplayer. You can disable the option of being invaded but doing so will completely reset your experience meter for the multiplayer skill tree. 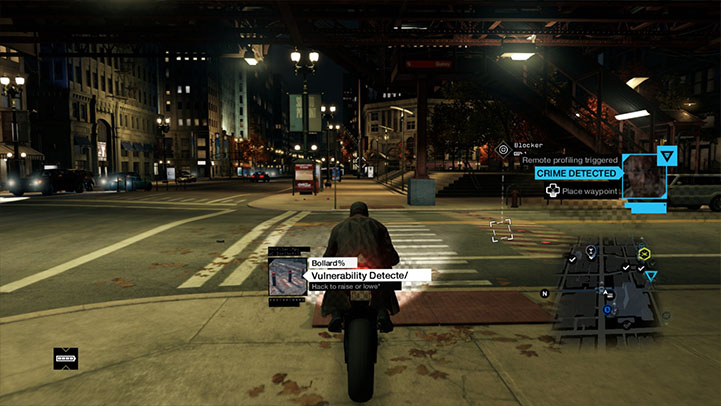 Overall Watch Dogs is a great game but does have its rough edges. Great multiplayer and an engaging storyline really round out Watch Dogs to be a good open world game. Following the main storyline will net you about 30 hours of gameplay with an additional 10-20 hours for full completion. The hacking mechanic is a nice addition to the library of gimmicks in the open world game genre and we can’t wait to see what new thing awaits us on the horizon.