Sackboy: A Big Adventure Review (PS4) – For the Kids and Kids-at-Heart

The thing about 3D platformers is that you’ve either got a separate gimmick boosting you up  like wacky weapons or sandbox elements, or you’re brave enough to challenge the Italian plumber on his own turf with a hefty platforming experience.

Sackboy: A Big Adventure does the latter, and it does so pretty well. 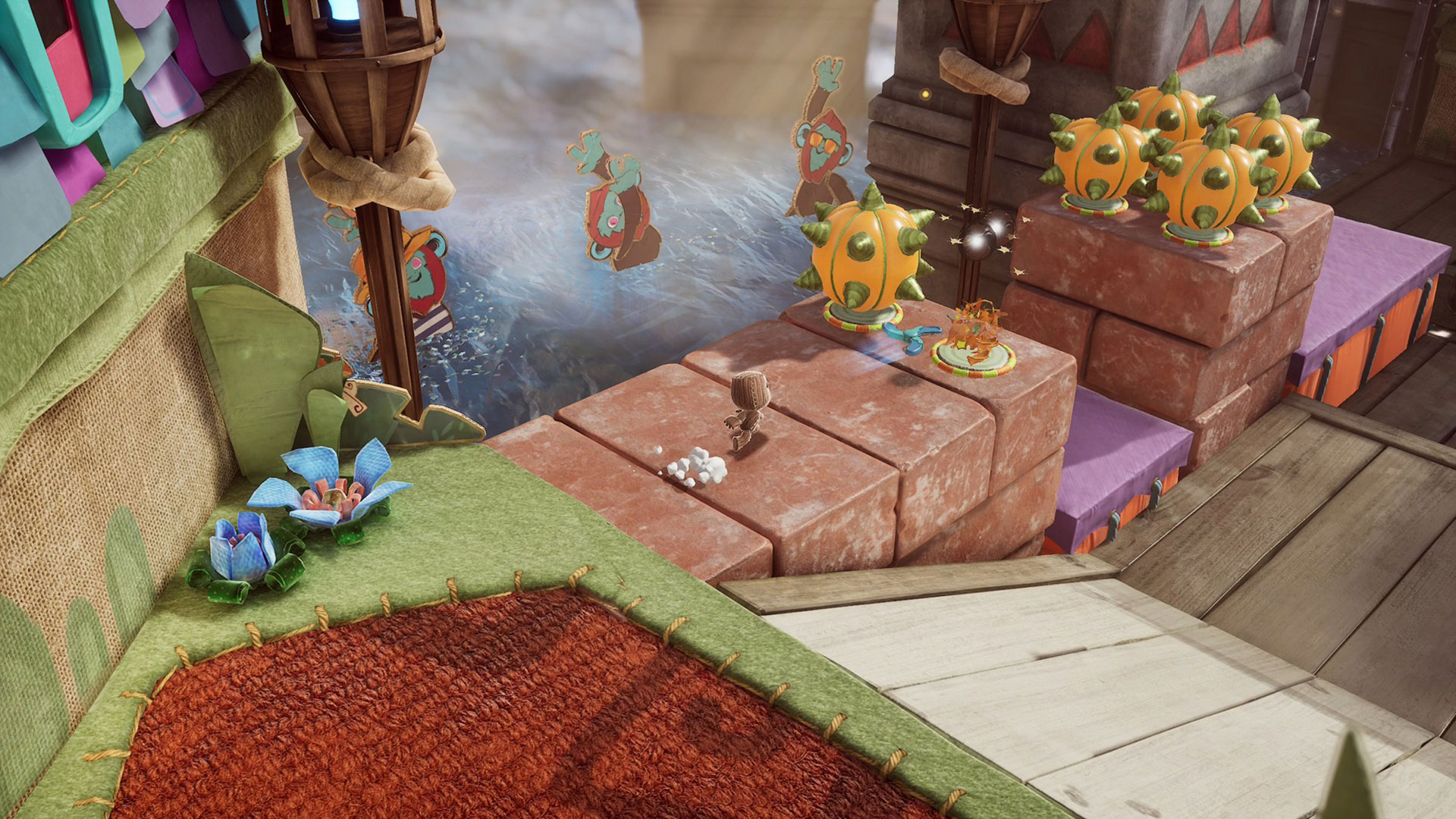 It’s all the more impressive when you remember that Sackboy doesn’t exactly come from a refined platforming pedigree—The LittleBigPlanet games were more about the ability to create and share levels over precise controls and a varied moveset, while Sackboy’s previous outing was a racing game. With his floaty jumps and slippery feet, you would think a whole game about platforming would be a little far outside Sackboy’s comfort zone, but Sackboy: A Big Adventure is a solid experience, far better than I expected it to be. 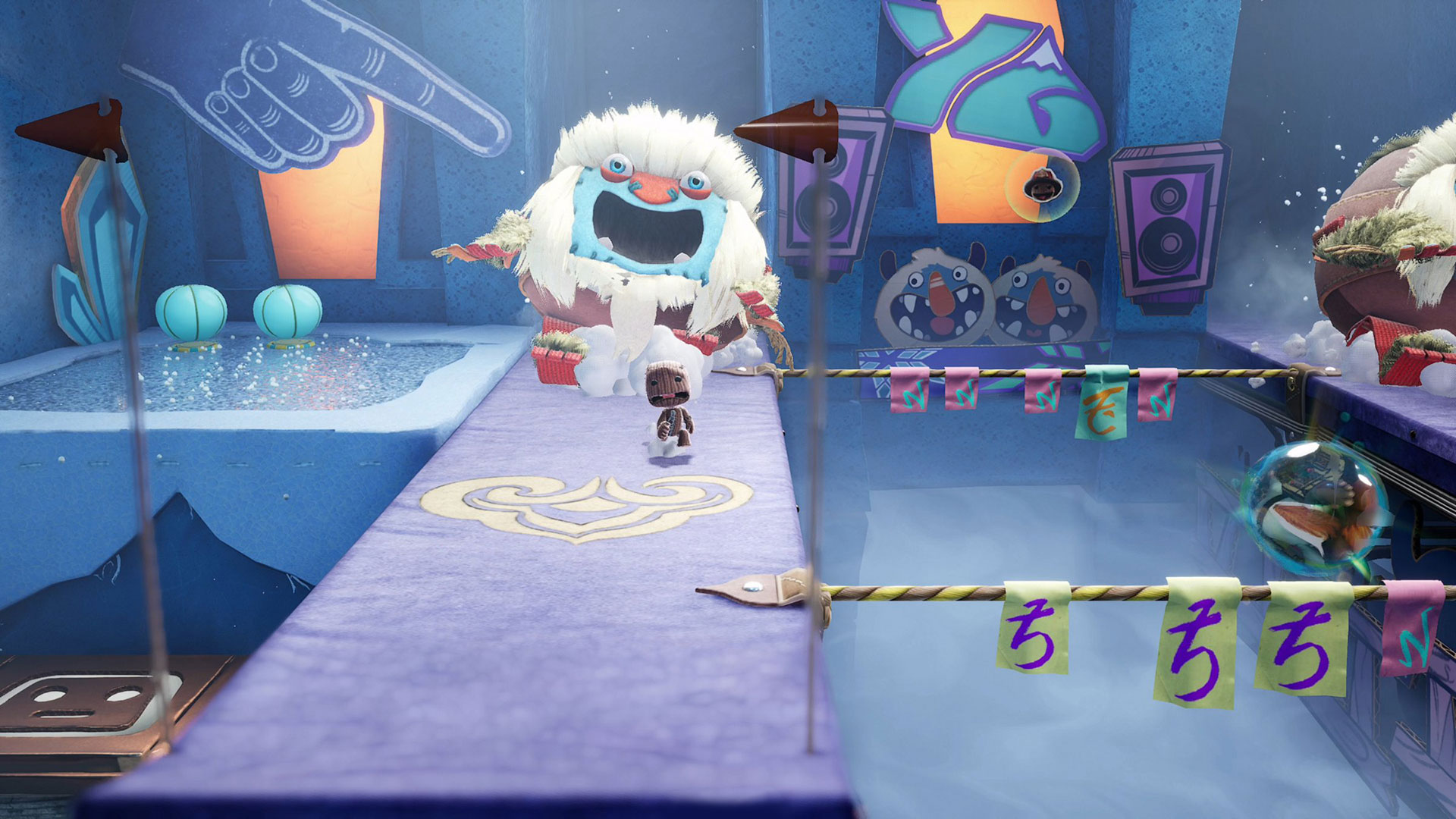 In a by-the-numbers but cute story, a villain made of nightmares called Vex kidnaps every Sackperson and Sackboy is forced to flee halfway across his planet of Craftworld. In his temporary exile, he comes under the guidance of a wise old lady who comedically always knows what’s going on. From there, it’s the usual array of wildly different levels across five worlds (and one bonus endgame world), each with their own gimmicks, collectibles, and bosses to prepare Sackboy for a showdown with Vex’s nightmare machine. 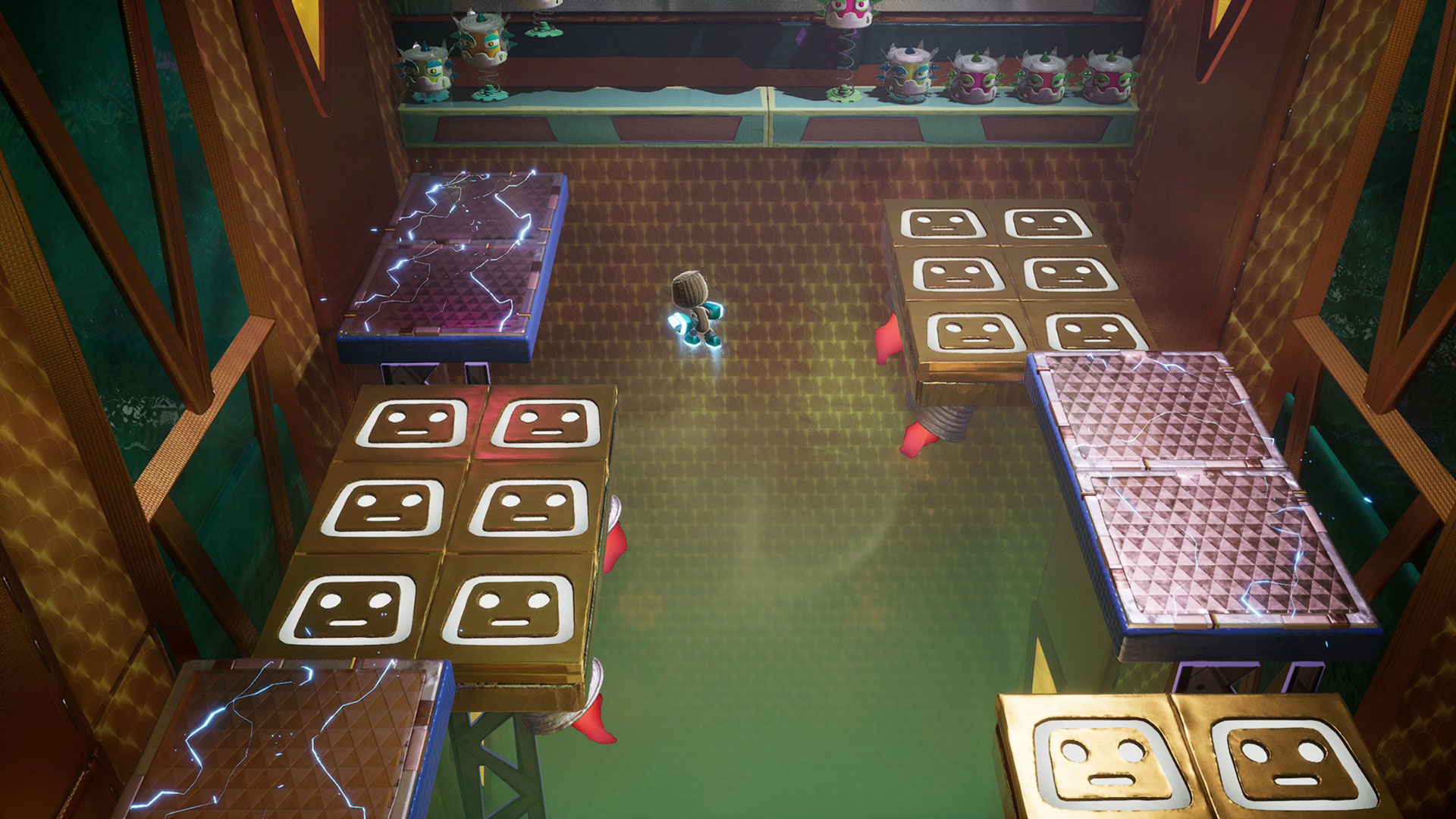 Now the thing is, while Sackboy’s handling was reworked to be a remarkable improvement over LittleBigPlanet’s, his movement options are still pretty basic. He can run, he can punch, he can roll, he can do the Yoshi-esque flutterjump which slows his fall, and of course, he can grip on to spongy surfaces just like in LittleBigPlanet. Where the gameplay really shines is in its levels, which are full of neat gameplay and presentation gimmicks like floating bubbles to latch onto, music levels that have you play to the tunes of Britney Spear’s Toxic, and a beautiful art style that has every part of a level look like it sprung right out of an arts and crafts class. One time, it even took a while before I realized the massive metal thing I was walking over was actually the surface of a refrigerator. Mind you, I played this on the PlayStation 4; even without the increased graphical power of the PS5, I would be hard-pressed to describe the game as anything less than gorgeous. 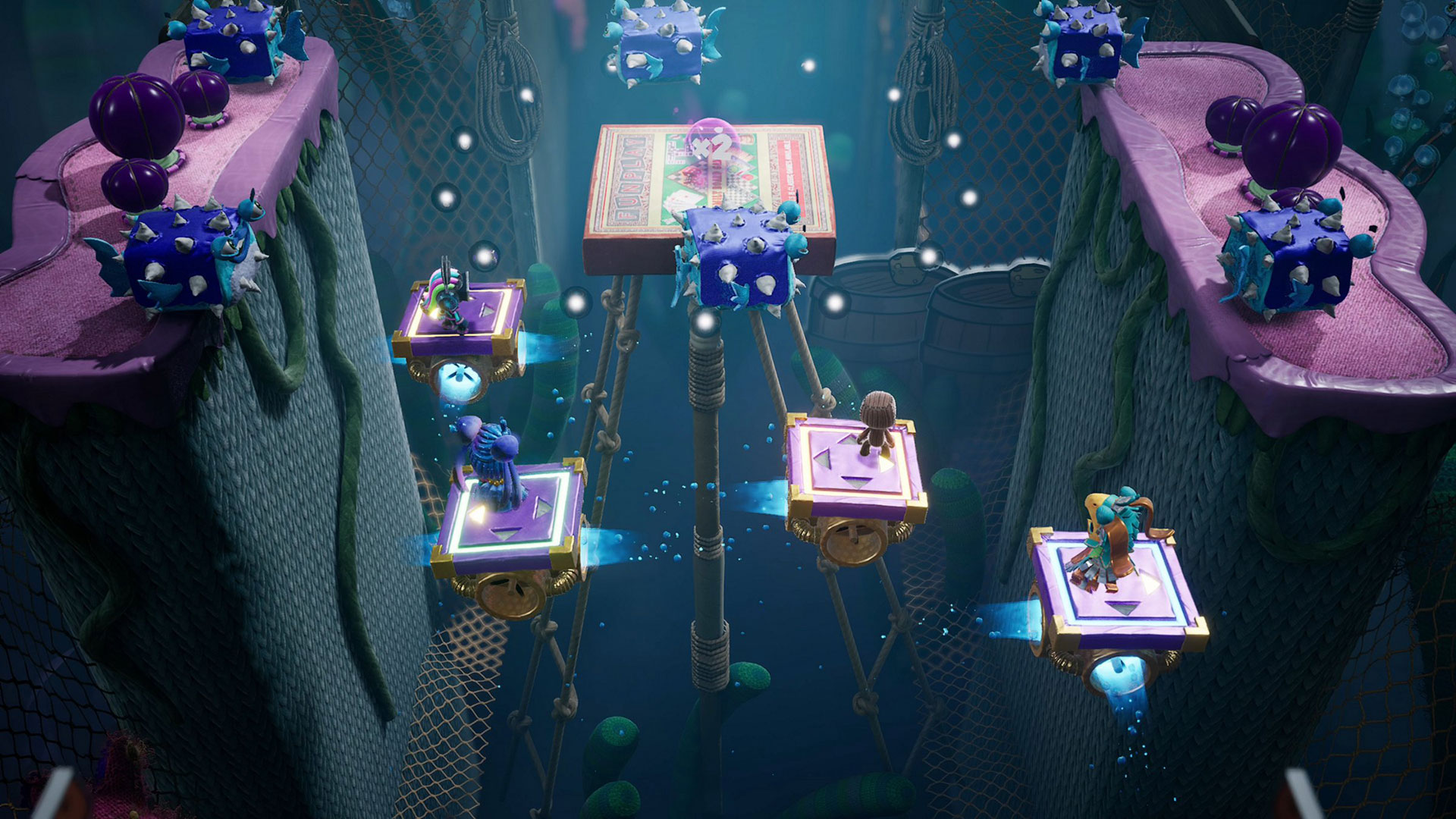 If I were to point out my favorite part of Sackboy: A Big Adventure though, it would definitely be the co-op. It’s been quite some time since I last played a game on the PS4 that had couch co-op as a feature. Having grown up with the PS2, getting my little brother to come play through the levels with me brought back some sweet childhood memories. It’s not even a tacked on feature either, certain levels are co-op only, while even the main levels are greatly improved by having partners to help you collect every bubble and collectible by splitting up on branching paths. The end of each level even awards a trophy for the player with the highest score to pose with, introducing a light competitive element to the game, and a great opportunity to mess with each other thanks to the ability of Sackboy and pals to slap one another in the results screen. 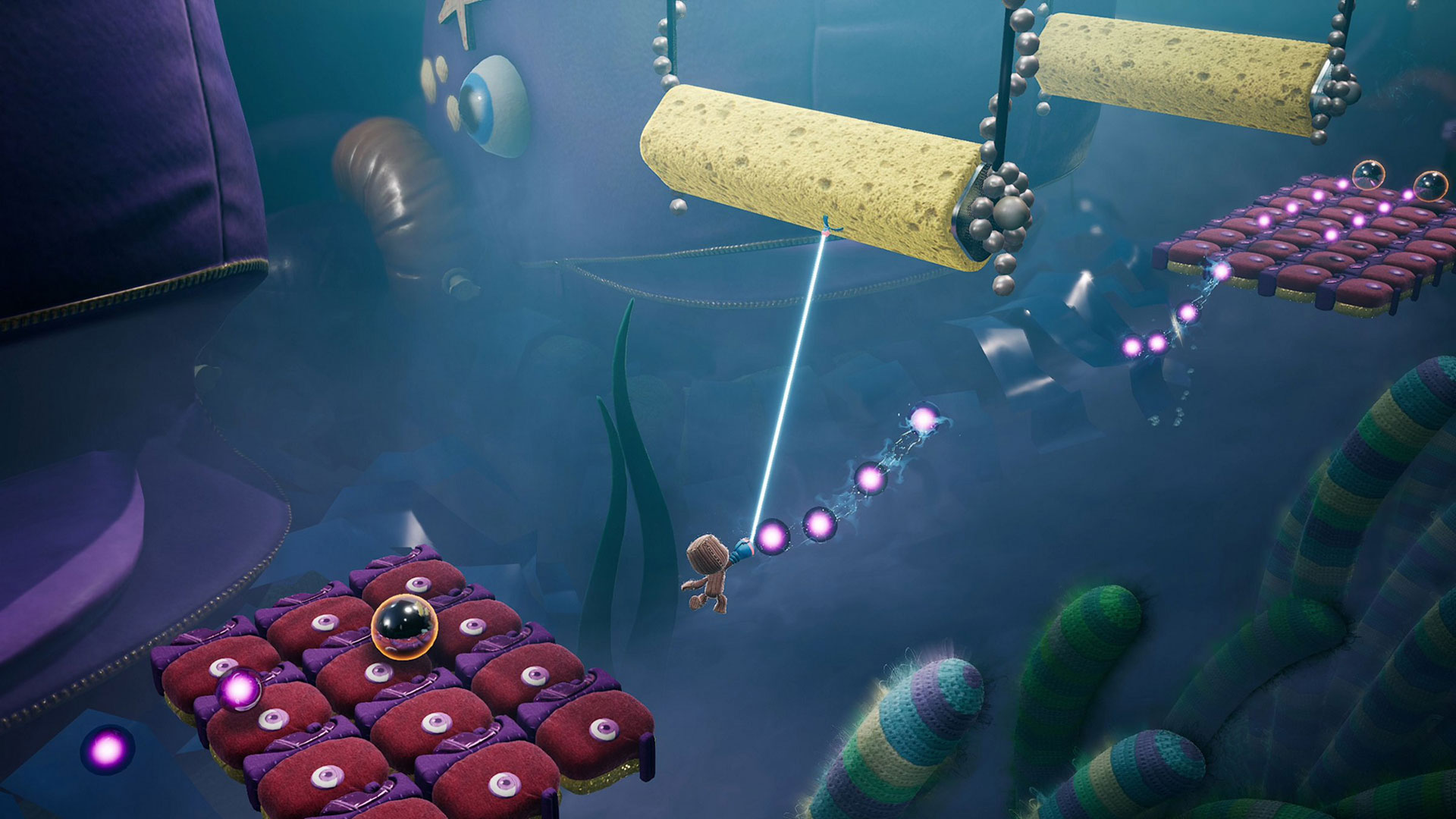 It may not get any points for originality, but when the art and music are gorgeous, the presentation most charming, and the game a fun, hefty, 12-hour experience with plenty of bonus levels and challenges for skill levels of all kinds, you’re getting a fantastic experience. Sackboy: A Big Adventure is a worthy entry to your Playstation library, a must for the kids and the kids-at-heart.