Arena fighting games based on popular anime or manga seem like a dime a dozen, with many of them turning out to be quite disappointing. While some showcase a clear lack of effort, others initially seem promising only to fall short. So I’m always pleased whenever I encounter an anime-based arena fighting game that is able to hit all or at least most of the notes that not only make it a good anime-based game but also a decent arena fighting game as well and My Hero One’s Justice 2 is one of them.

My Hero One’s Justice 2 is the second installment in Byking and Bandai Namco’s arena fighting game series based on the popular anime and manga Boku no Hero Academia/My Hero Academia. The first game in the series was released back in 2018 and while it was mostly a decent attempt at a good arena fighting game, some of its features and design elements felt lacking. Two years later, Byking seems to have not only taken the first game’s issues into account but also improved on the game as a whole to take it even further. 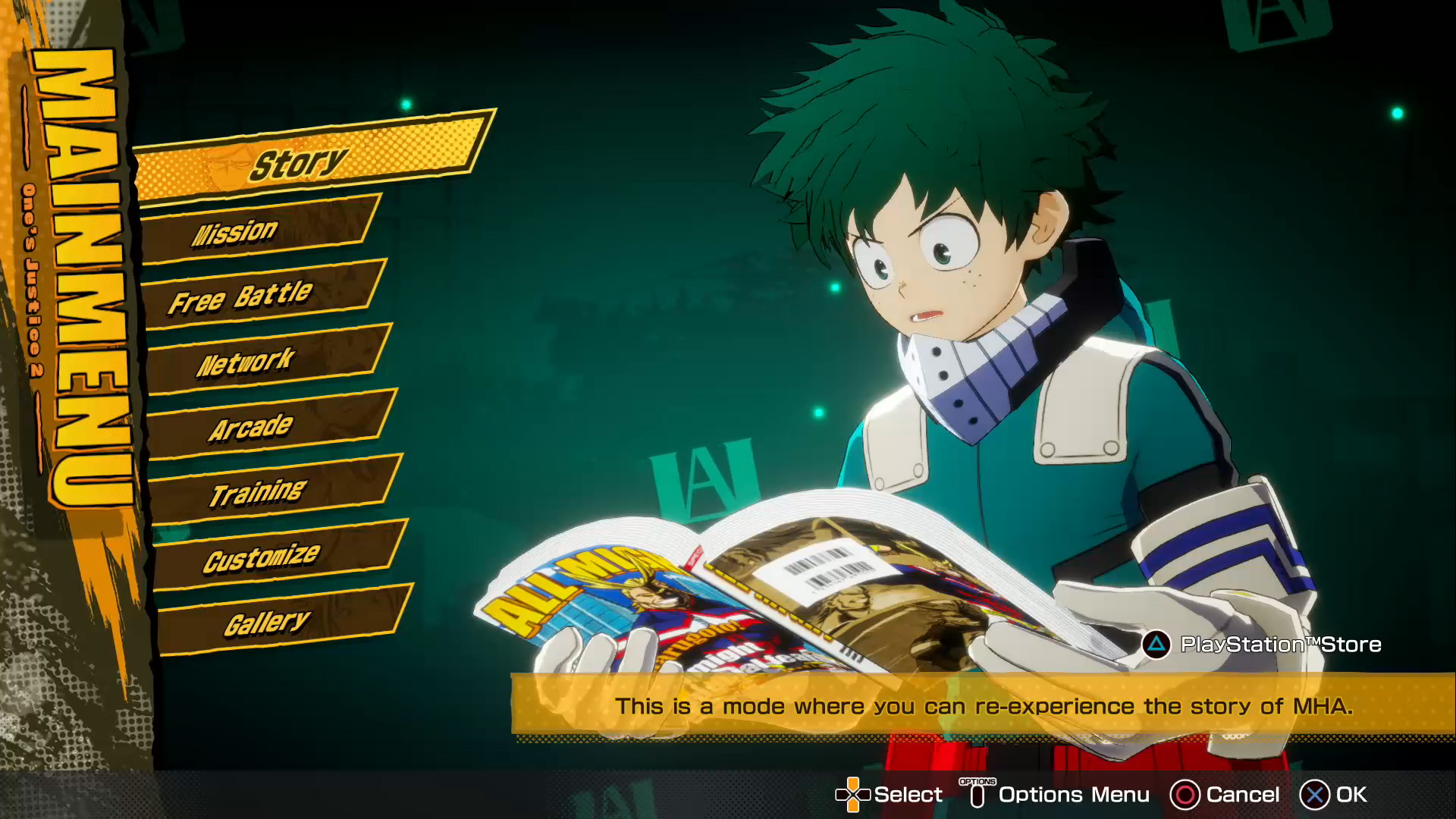 While the new game features many of the same game modes as the original, such as the story mode, arcade mode, and online mode, it also shows off a revamped interface, a much larger roster of characters, several new features, changes in the gameplay mechanics, and a number of overall improvements. All these not only combine to create a significantly better game than its predecessor but also shows just how much work the developers have put into making sure their second outing into the series would surpass the first.

The first noticeable change that you’ll encounter in My Hero One’s Justice 2 is the game’s revamped interface. The menus, fonts, colors, character portraits, and more have all been improved significantly. Most especially, the in-game health and stamina meters have been changed from plain bars to trapezoidal meters while the Plus Ultra meter is now the outline for the words. The changes to the interface makes the game look and feel more appealing, engaging, and closer to the anime and manga’s visual style and aesthetic.

Apart from the game’s interface, Byking has also slightly improved the game’s already awesome gameplay visuals. Its cel-shaded models, visual effects, and especially the Plus Ultra cinematics all look fantastic and really help make the combat as well as each of the characters’ moves and Quirks feel and look as amazing and impactful as they do in the anime. Sadly, the game’s stages look like they didn’t receive the same amount of attention as the rest of the game as many of them still look dull and generic. 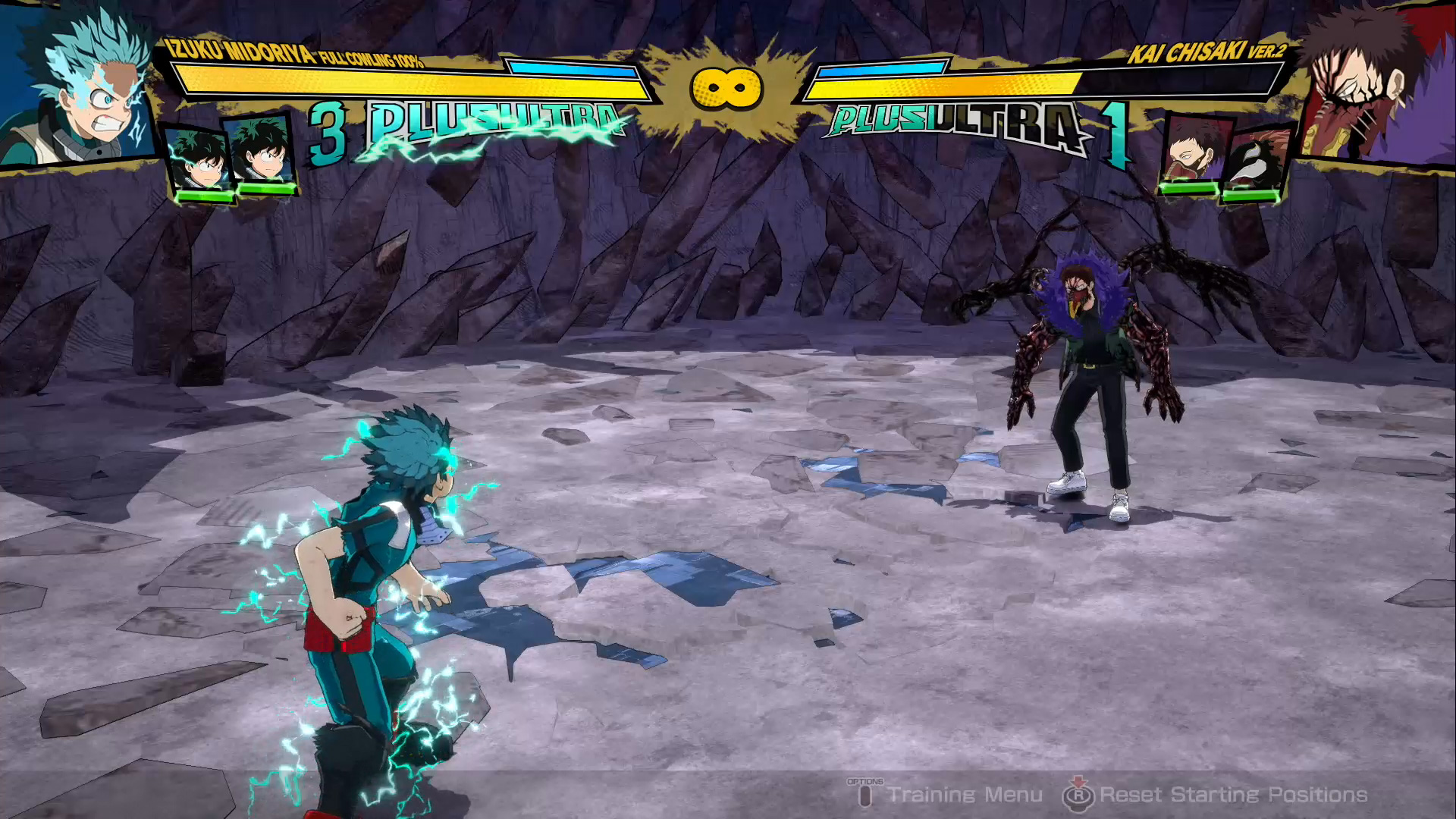 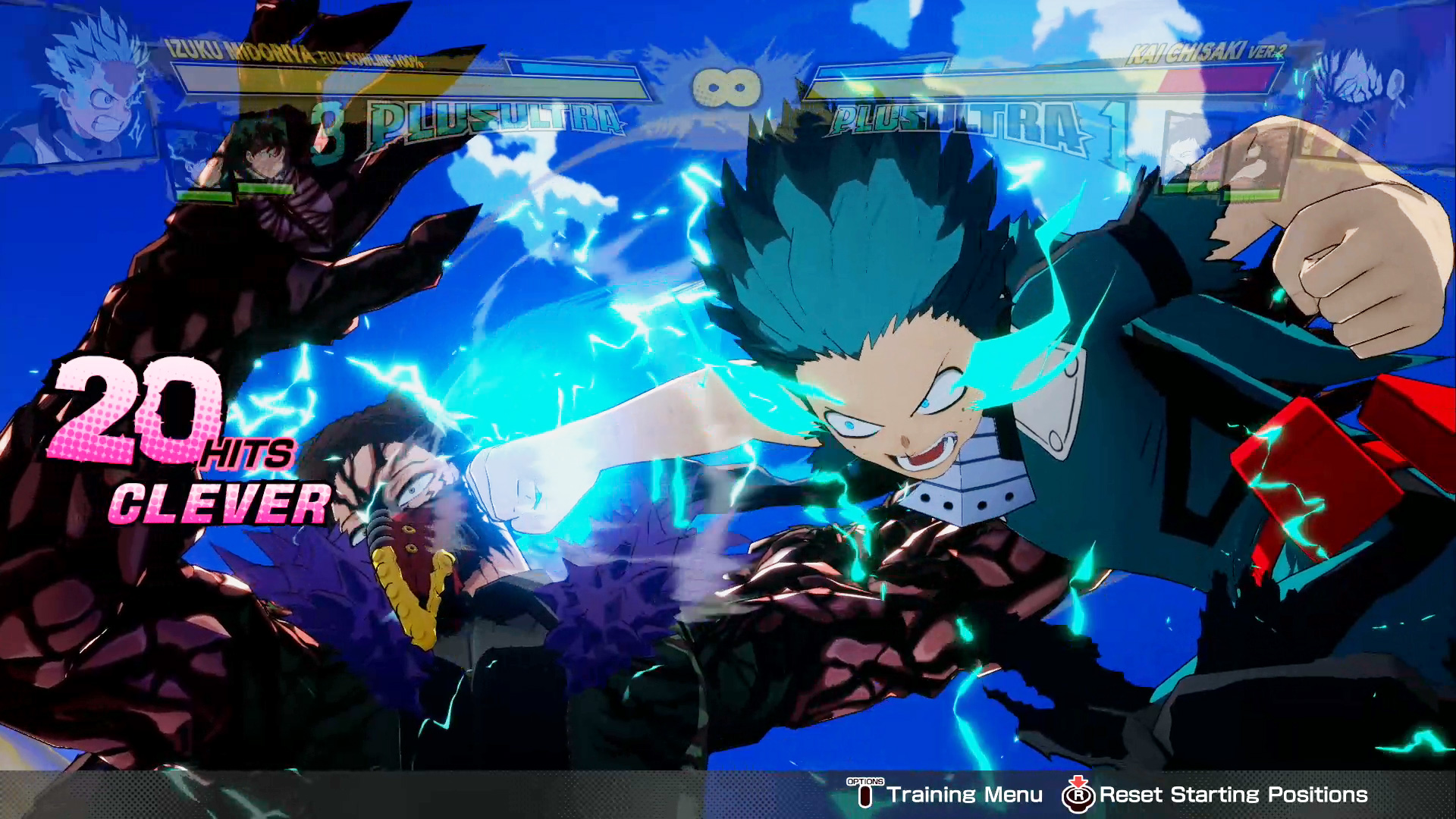 All of the game modes from the original have made a return in My Hero One’s Justice 2, including the Story Mode, Mission, Free Battle, Arcade, Training, and Online. And while some of the modes have been left mostly the same as the first game, the Mission mode has been revamped with a number of new features to give it more substance and replayability while the Free Battle mode has a new and rather creative 4-player game type that will pit duos of players against each other.

The new Mission Mode has been revamped from just being a challenge mode to something that fits better, although loosely, into the series’ narrative. In the new Mission Mode, you’ll be able to create your own hero agency and hire any of the game’s heroes or villains using the in-game currency, build teams, then accept missions. Much like the first game, the missions are composed of maps consisting of several fights as well as items to help. You’ll have to finish all the map’s fights before your stamina runs out to avoid failing the mission. 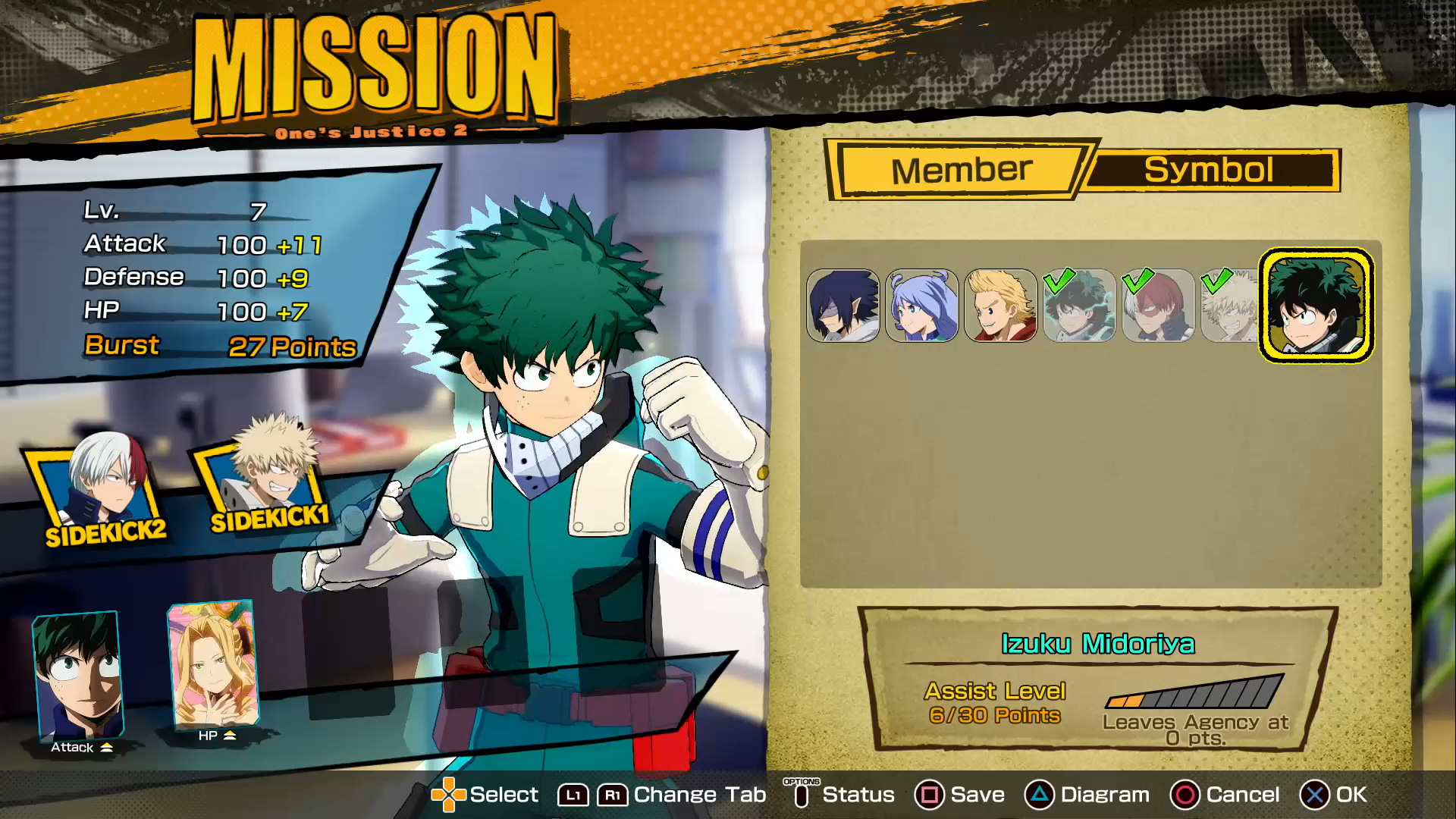 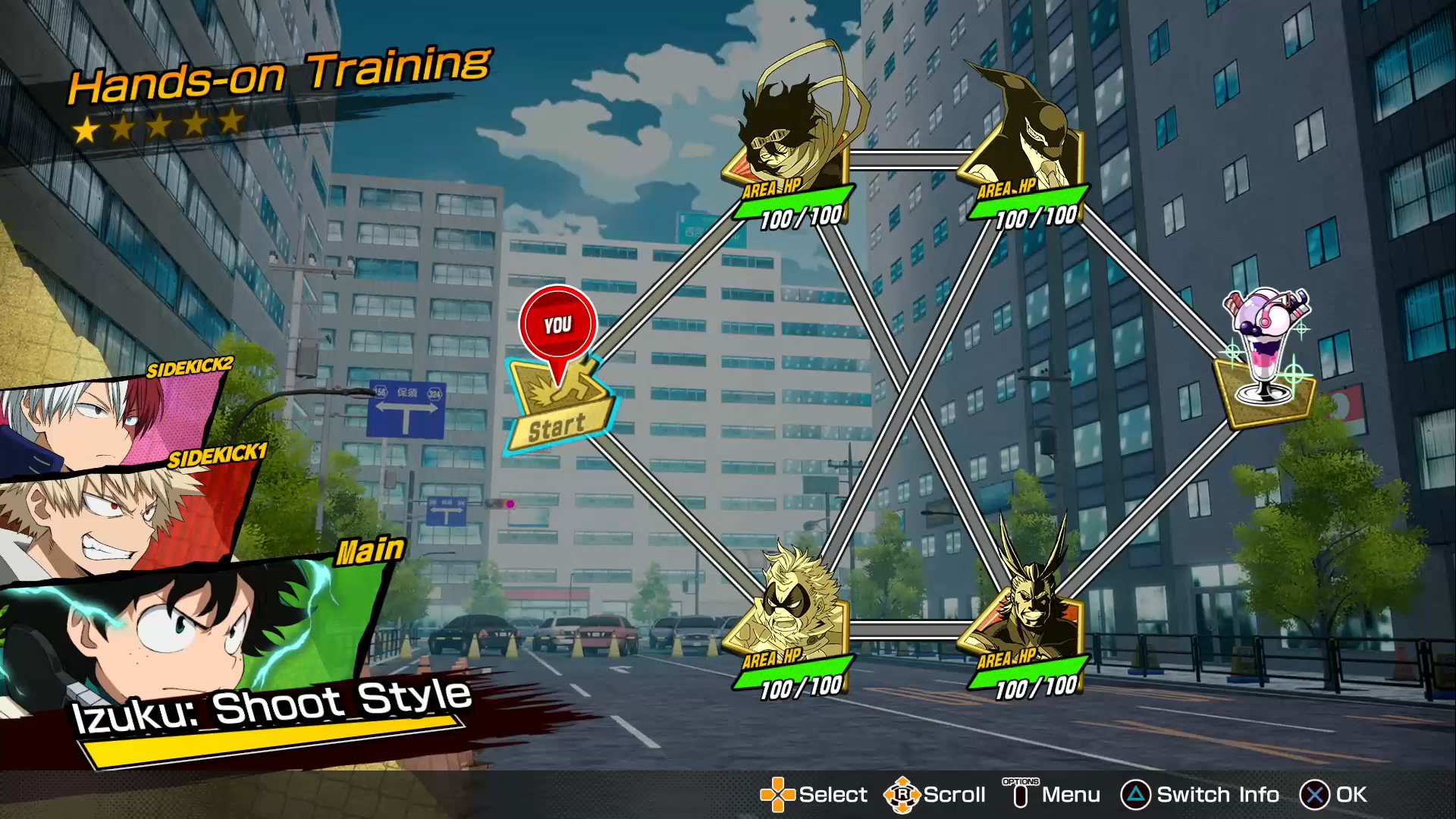 As you successfully complete missions with your team, they’ll gain experience and level up while you’ll also unlock buffs that can be equipped by your team to give them boosts in stats and give them special traits. On the other, continuously failing missions may lead to your members leaving your agency. Additionally, the enemies you face may also be equipped with their own buffs that will make some of the fights especially unique and challenging. The new Mission mode helps give the game much more replayability after you finish the Story mode.

In the Free Battle mode’s new 4-player gamer type, the two main players will control their respective main characters while the other two players will be able to summon and control the sidekicks. The two secondary players will have full control over the sidekicks, with access to their movesets and Plus Ultras. The sidekicks won’t have their own health and Plus Ultra meter though (the latter will be shared with the main player) and will be unsummoned if they’re hit. It’s an interesting gimmick that players can enjoy as a party game. 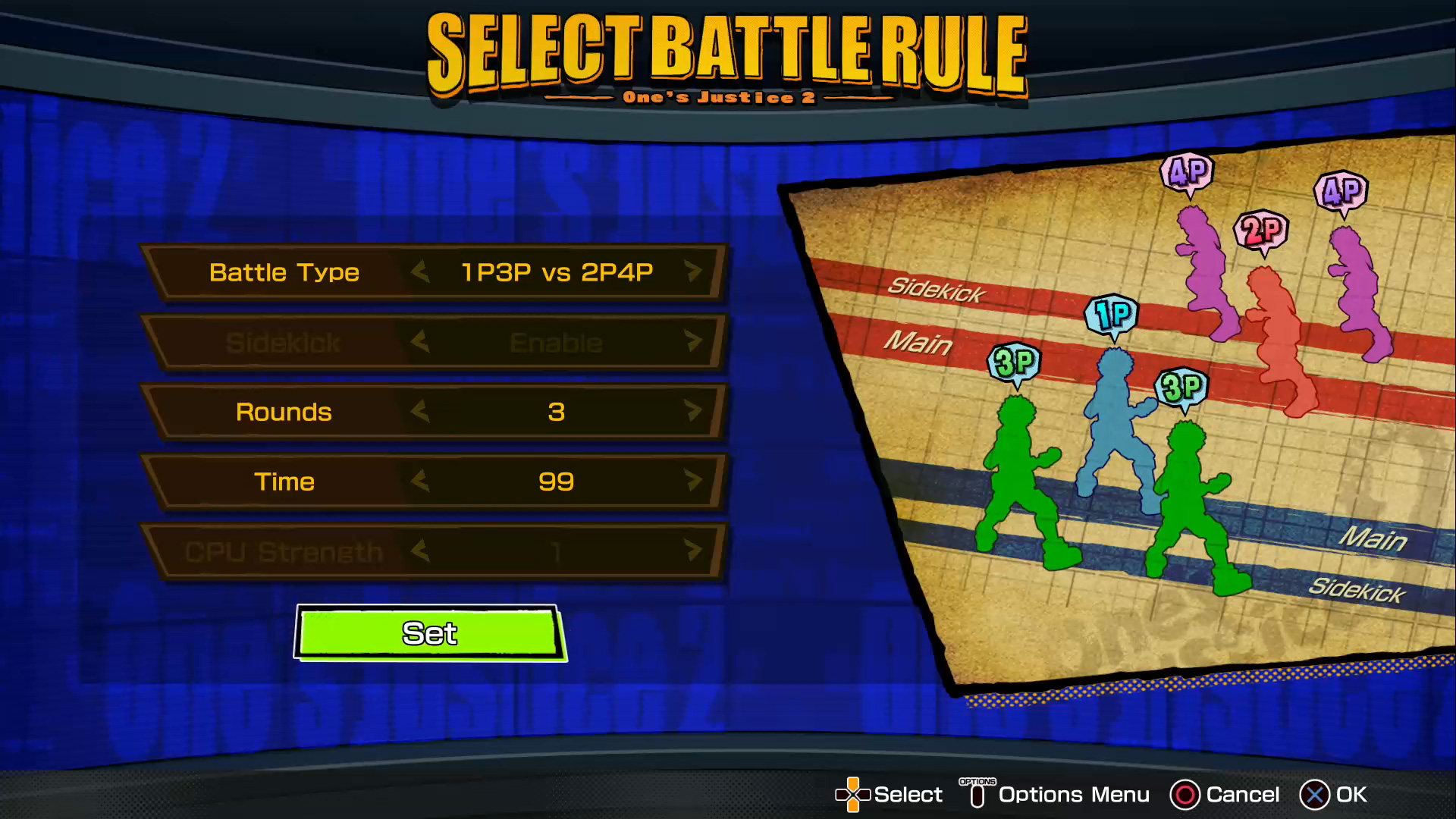 Not only are all the 23 playable characters from the original available in My Hero One’s Justice 2 but 18 additional characters have also been added into the game’s roster, which makes for a total of 41 playable characters. Many of the new characters come from the anime’s latest Shie Hassaikai story arc including Sir Nighteye, U.A.’s Big Three (Mirio Togata, Tamaki Amajiki, and Nejire Hado), and the arc’s ultimate villain, Overhaul. Some of the character’s from previous arcs, such as fan favorite Minoru Mineta, have also finally made their way into the game.

Being able to build teams and play as your favorite characters, such as a team with the Big 3 or a team with all three available versions of Deku, is always a fun experience. Getting the opportunity to play as one of the series’ villains is also pretty interesting. The developers have excellently translated the characteristics, abilities, and Quirks of each character into the game, which makes each look and play differently and allows for some interesting team combinations and synergies. 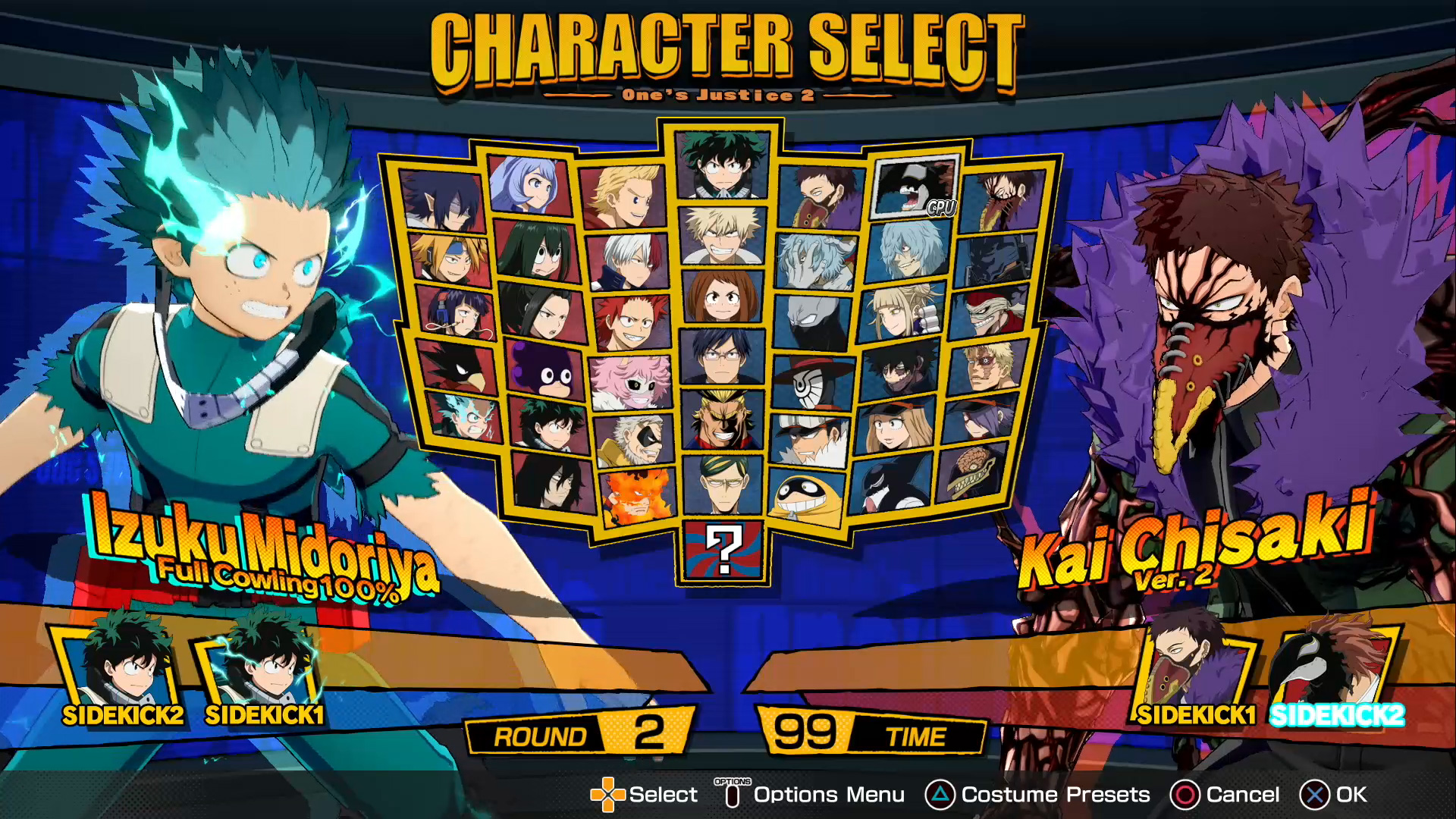 The game’s large roster of popular characters helps the game become more attractive not only to fans of the series but also newcomers who would like to try it out. The popularity of the anime and manga series also help the game become more familiar and recognizable. And with each character featuring their own unique moveset, playstyles, and gimmicks, there’s a ton of variety as well as a ton of possibilities to explore. Some returning characters even feature completely new movesets so players of the original game will still have a lot of new things to experience.

The game still also features the character customization from the first game, which allows you to customize the outfits of the game’s characters. So rather than playing through the modes to unlock characters, as the full roster is instantly available from the start, you instead unlock cosmetic items by completing story mode challenges, missions, or by using the game’s currency. The cosmetic items include helmets or hats, face masks and accessories, uniforms, leg accessories, voice packs, and more. 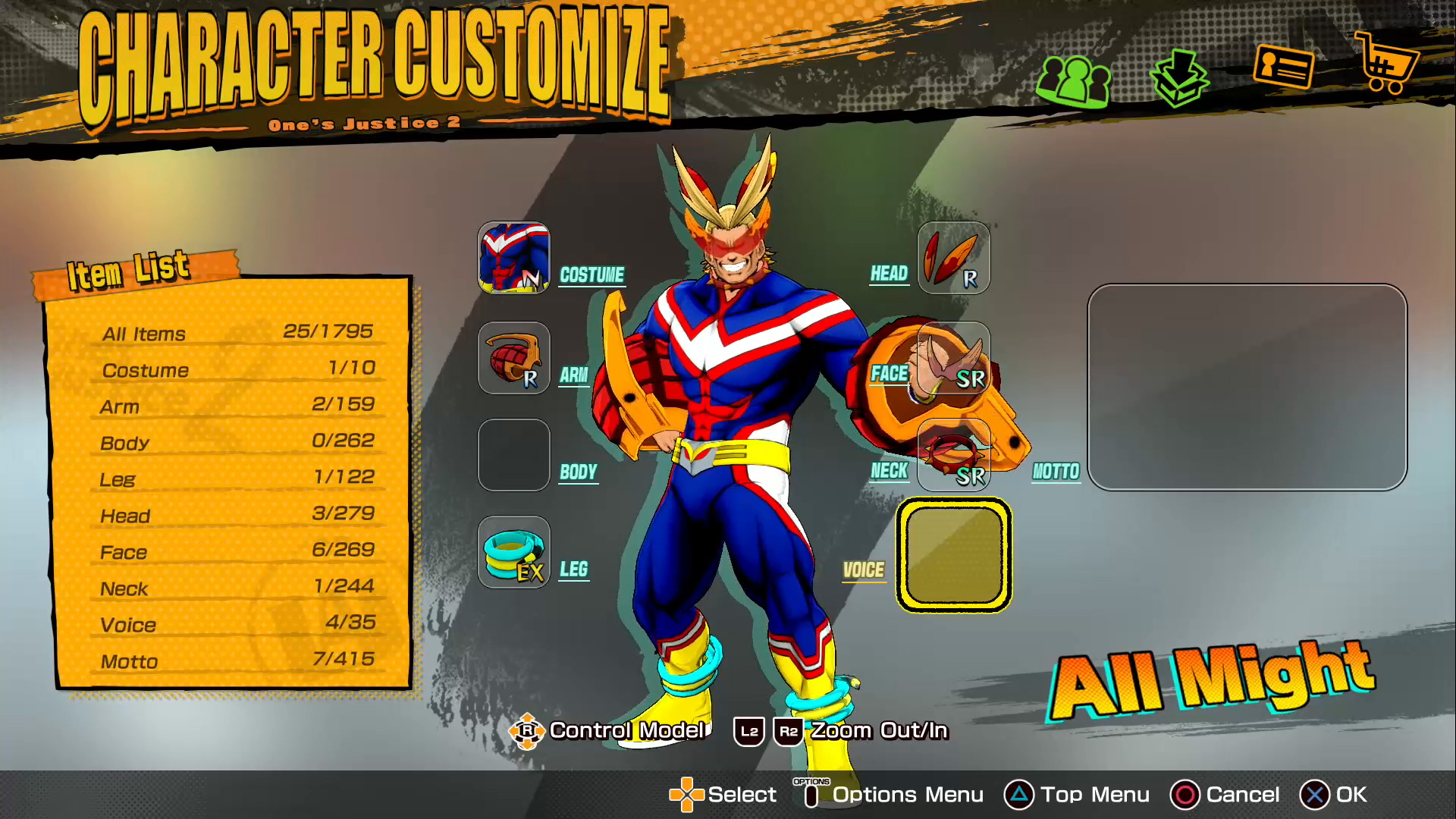 Go Beyond, Plus Ultra!

As it is an arena fighting game, the core gameplay loop of My Hero One’s Justice 2 will still fall back to the arena fighting regardless of the game mode you choose to play in. To start with, each character has a normal attack and two Quirk-based attacks that differ for each character. Combining any of those three buttons with either of the shoulder buttons or a direction from the analog stick gives you access to even more moves, including each character’s armoured and unblockable attacks as well as their Plus Ultra super moves.

Armoured attacks are uninterruptible but can be blocked, which makes them useful as counters when your opponent is in the middle of a normal attack. On the other hand, unblockable moves can be interrupted with a normal attack but are great against opponents that are off their guard or have a tendency to block. The game makes both moves easy enough to spot as armoured attacks turn your character yellow while unblockable moves turn you red. Additionally, both moves tend to have slow startup animations, which gives you adequate time to react. 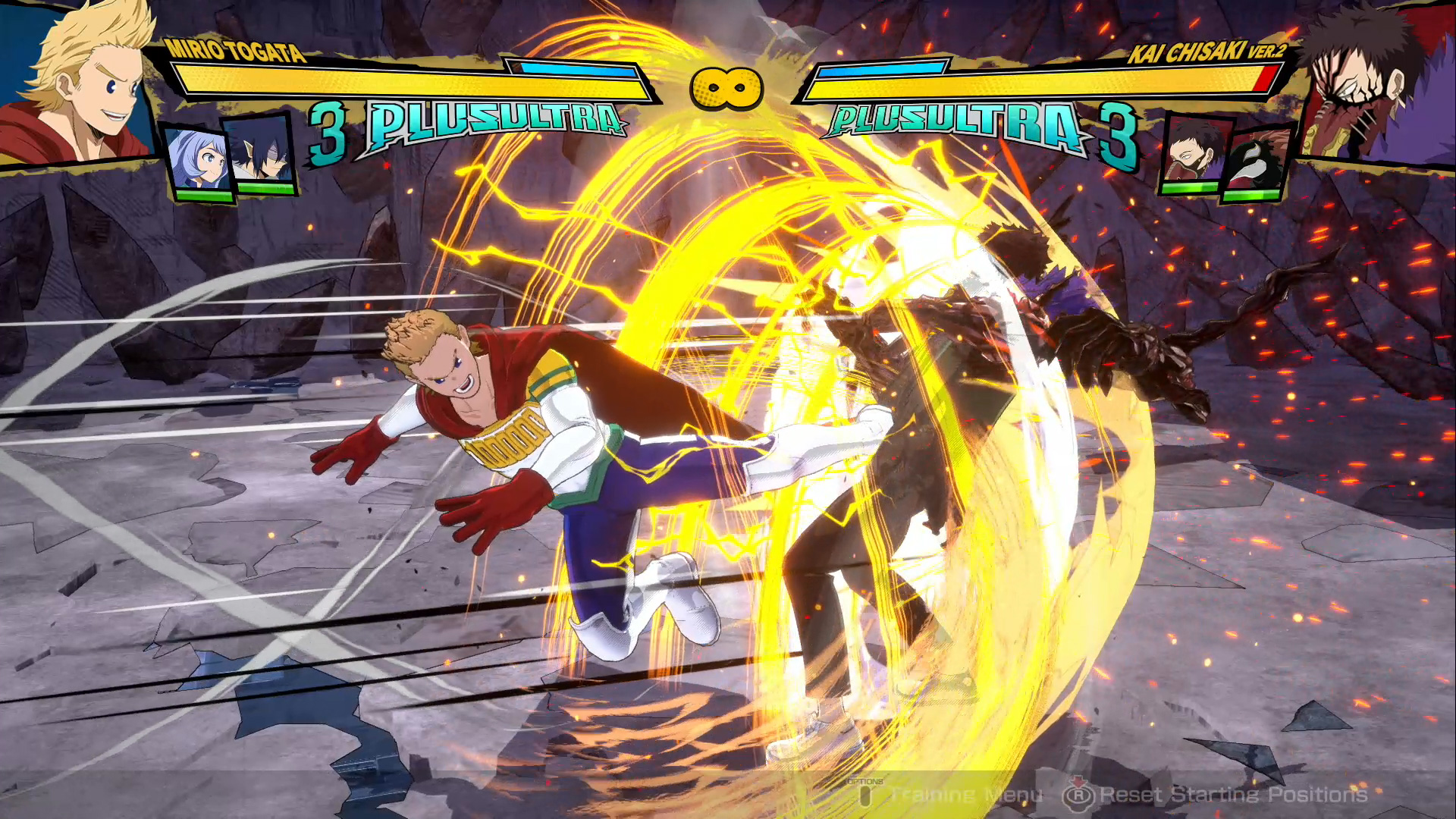 My Hero One’s Justice 2 also has an auto combo mechanic, called Normal or Manual combos, that can be switched on or off by the player. When the mechanic is switched on, continuously pressing the normal attack button will automatically cause the character to execute an appropriate combo that combines several normal and Quirk-based attacks. While the auto combo system makes it easier for players to perform better when they’re still starting out, their damage potential is ultimately limited as manual combo strings are able to last much longer.

Other moves in the game include jumping, dashing, airdashing, blocking, and performing guard cancels you successfully block, opening up an opportunity for you to counter hit. My Hero One’s Justice 2 has also introduced a new sidestep move than you can execute while you’re blocking. The move gives you the option to either commit to a block or dodge at the last second to either get better spacing or positioning for a counter attack. Just like blocking, executing a sidestep uses up some of your stamina meter though. 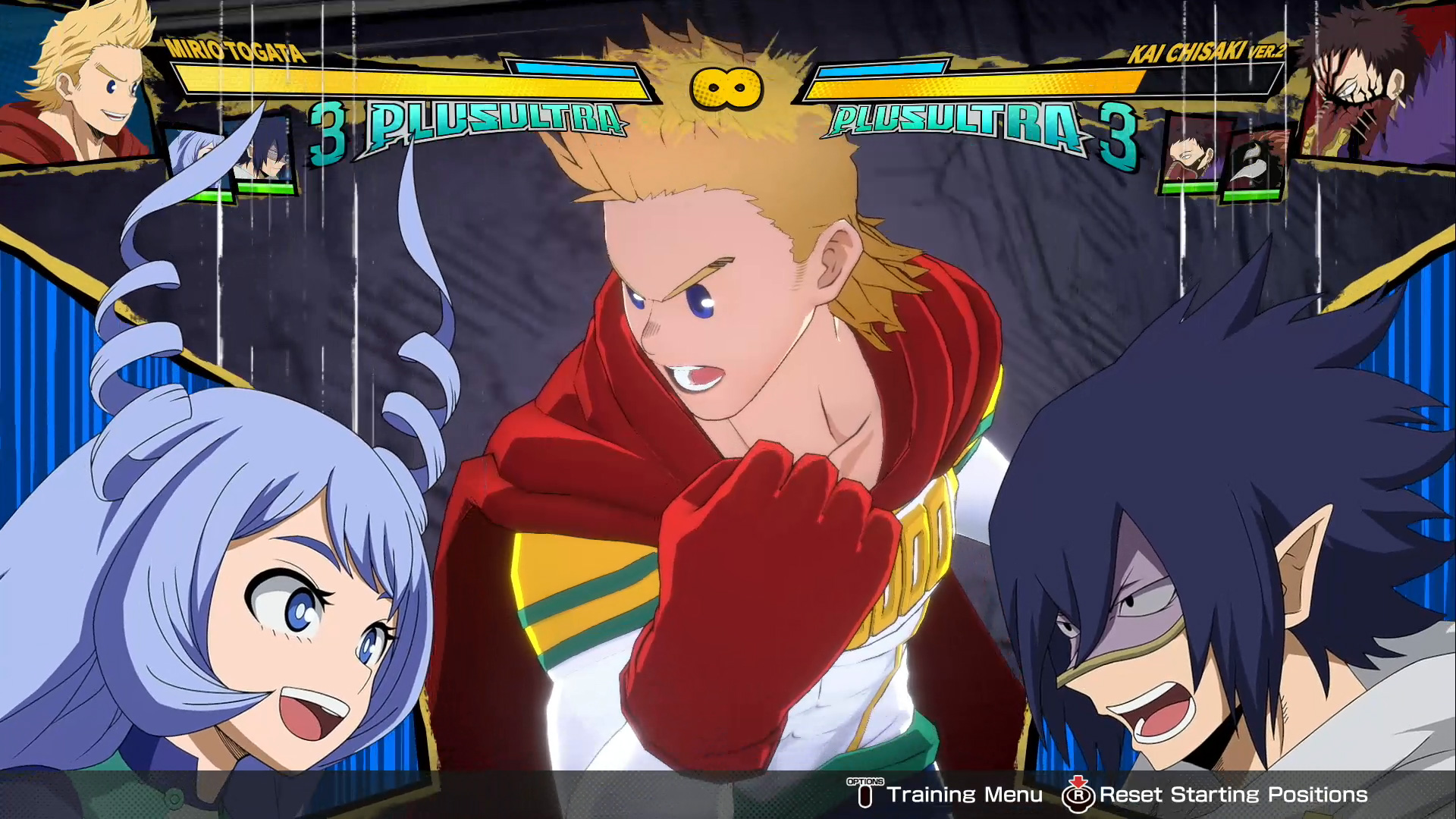 The sidekick/assist system of My Hero’s One Justice 2 is mostly the same as the original. You’ll still be able to call in your sidekicks to perform their respective assist moves, whether to extend a combo, to get out of an opponent’s combo, or safely end a blocked or wiffed combo. But now you’ll also be able to use one of their Plus Ultra moves as well as a new Plus Ultra All/Team Plus Ultra move if you have enough meter available. This makes team synergy even more important to maximize the effectiveness of your sidekicks.

My Hero One’s Justice 2 has also received several changes to its mechanics, which looks like an attempt from the developers to improve the game and take it a step further into becoming a deeper and more serious fighting game. Firstly, the floatiness of characters that’s usually expected from 3D arena fighting games has been reduced from the original and the movements of the characters have been sped up slightly, both of which help players be more aggressive and make the pace of each match go much faster. 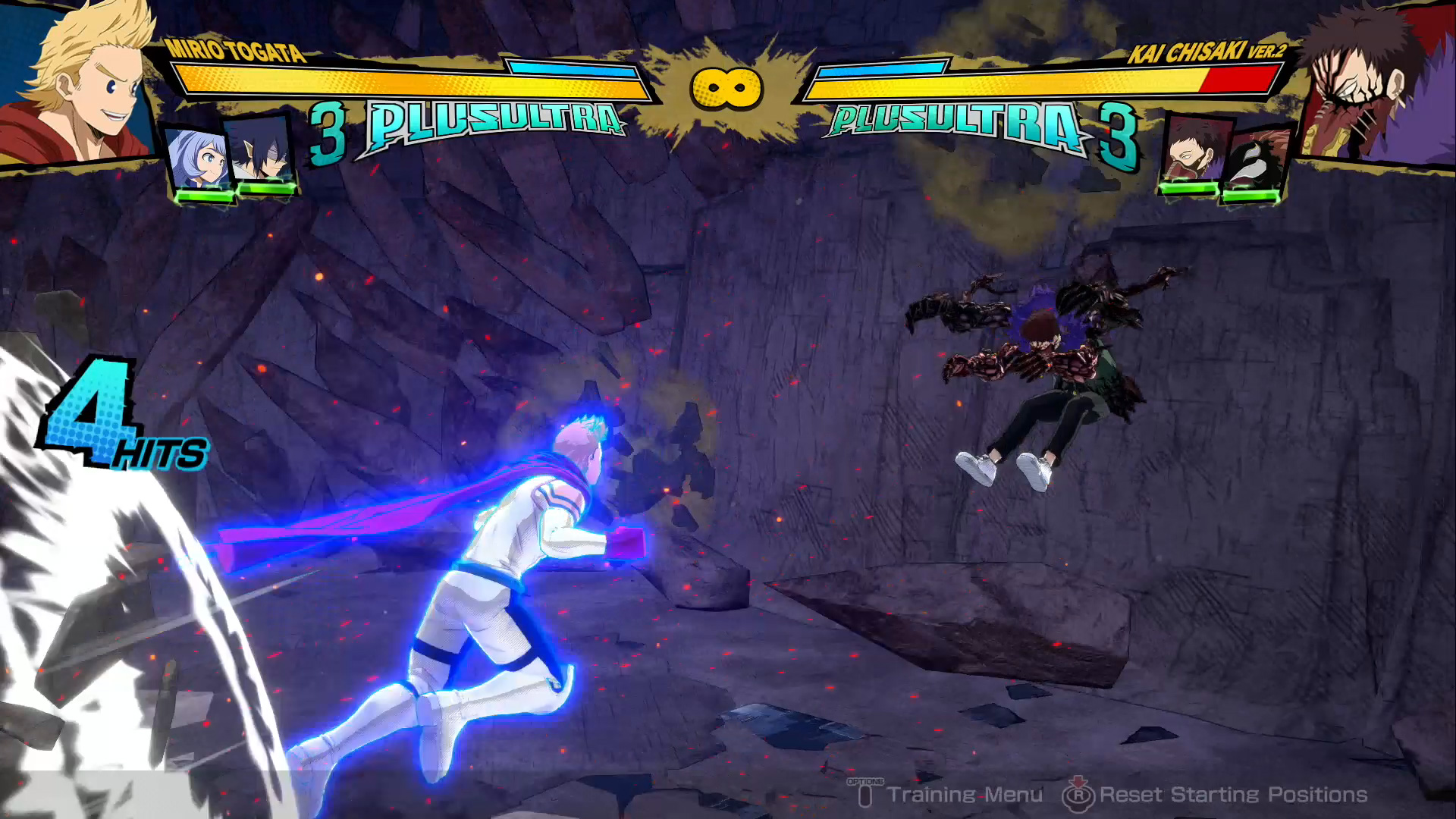 They’ve also changed the dash canceling mechanic from being limited to one per combo to it using up some of the player’s Plus Ultra meter instead. Now, players can dash cancel as many times they want as long as they have enough meter for it. This change gives players a lot more options not only for extending combos but also for mix-ups and more. It also forces players to start managing their meter and thinking about whether to use it for dash cancels, Plus Ultra assists, their own Plus Ultra moves, or a Team Plus Ultra.

My Hero One’s Justice 2’s significantly improved interface, larger roster of popular characters, and improvements to its gameplay modes and mechanics, have all been incredibly impressive. While its stages still need some work, they’re easily shadowed by all the positive steps the developer has taken to take the game one step closer to becoming a fighting game worth taking seriously. Fans of the first game as well as the My Hero Academia franchise will definitely enjoy My Hero One’s Justice 2 and fans of arena fighting games will find that it’s one of the better arena fighting games in the market right now.