Lenovo has been doing well in building its Legion brand ever since it was launched back in 2017, continuously improving its lineup of gaming laptops and even expanding its product line to include pre-built gaming desktops, monitors, peripherals, and even a gaming smartphone. And last year, the company took another step into solidifying its gaming-focused brand even further with the release of the Legion 7i, which introduced the company’s new naming convention for the brand’s gaming laptops that also included the Legion 3 and Legion 5 series.

The successor to the Legion Y740, the Lenovo 7i still carries the same core design Lenovo has been using since the Legion Y730 from 2018, with some notable improvements to its design and features. Lenovo has also equipped it with an Intel 10th generation H series processor coupled with an NVIDIA GeForce RTX 20 series GPU as well as a 240Hz refresh rate display. The configuration of our review unit includes an Intel Core i7-10750H, an NVIDIA GeForce RTX 2070 Super Max-Q, 16GB of RAM, and a 1TB SSD. 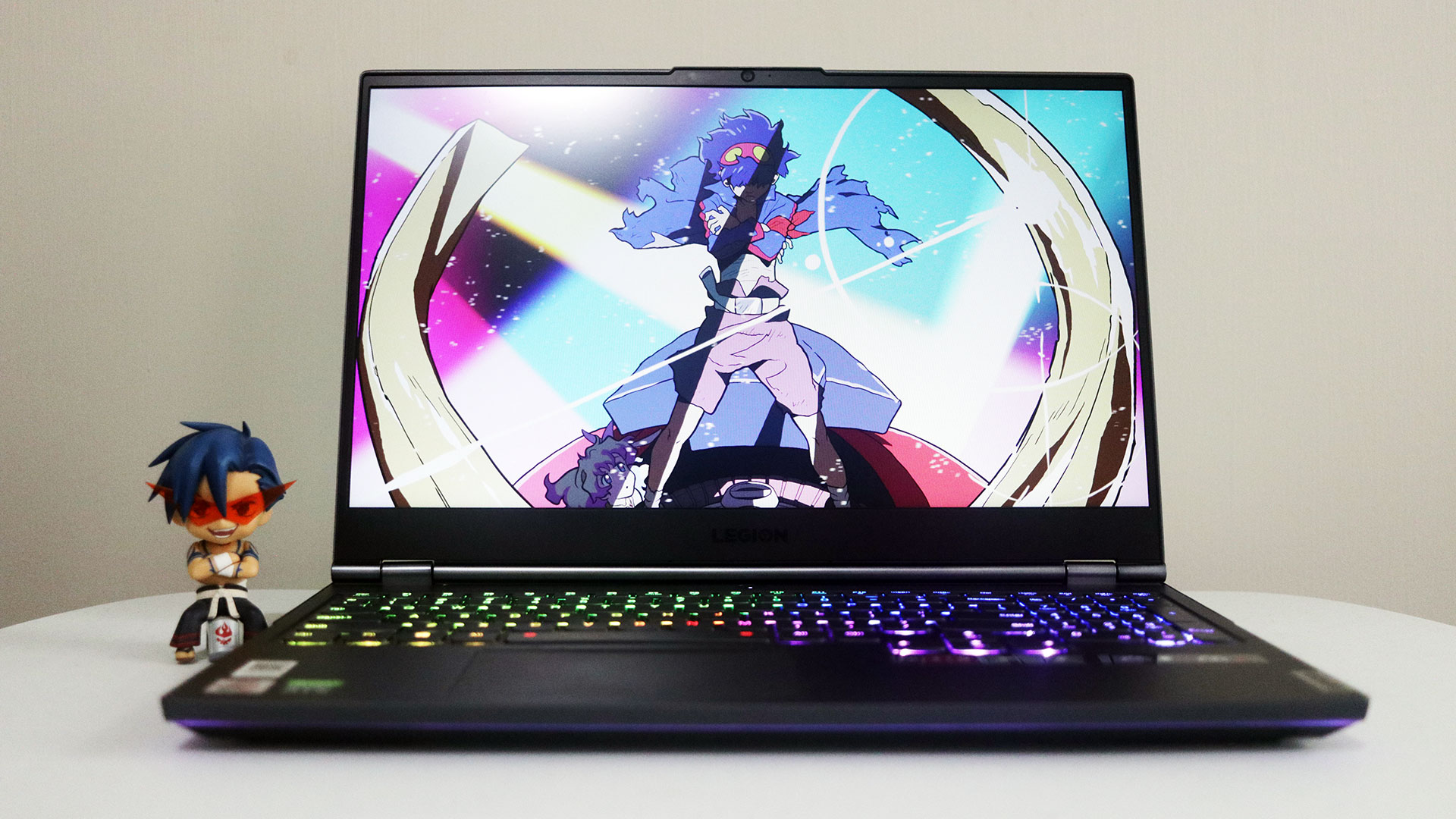 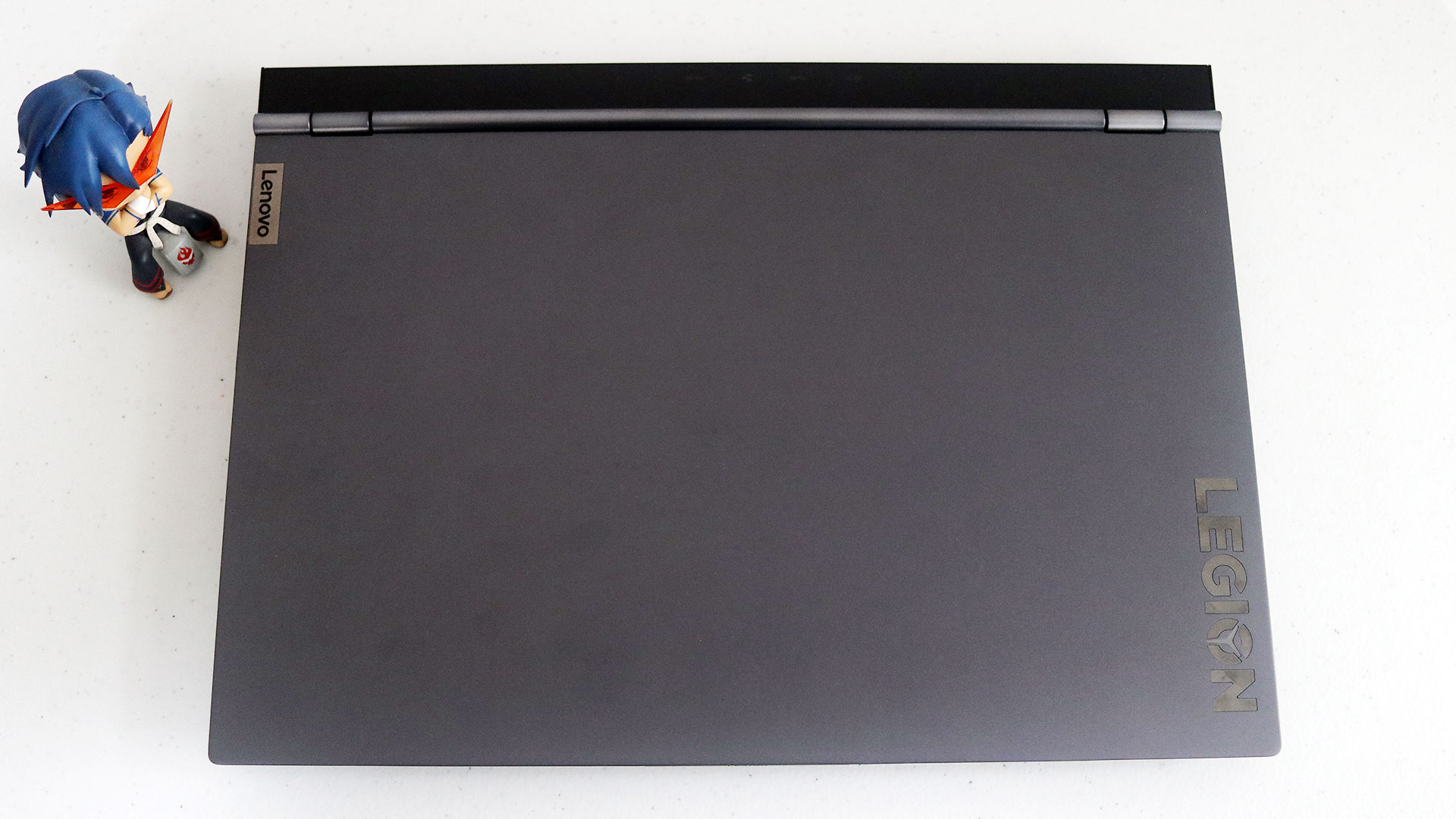 While the Legion 7i maintains many of the design elements of its predecessor, including its simple aesthetic, mostly aluminum body, and forward-mounted hinge, Lenovo has improved the looks of the new laptop in quite a few ways. The Legion 7i now features an even more understated and sleeker design than its predecessor as well as a slightly more compact and lighter chassis. According to Lenovo, the new laptop measures 360 x 255 x 20mm and weighs 2.1kg, making it shallower, thinner, and lighter than the Legion Y740.

The aluminum lid of the Legion 7i has been kept mostly the same with the only differences being the change in position of the Legion branding from the lower right to the upper left of the lid and the addition of the Lenovo branding. The RGB LED lighting on the “Y” of the Legion branding is still present. On the other hand, the bottom shell of the laptop has seen some significant changes. It’s now mostly a single piece of touch plastic with just the side vents being separate but attached pieces. 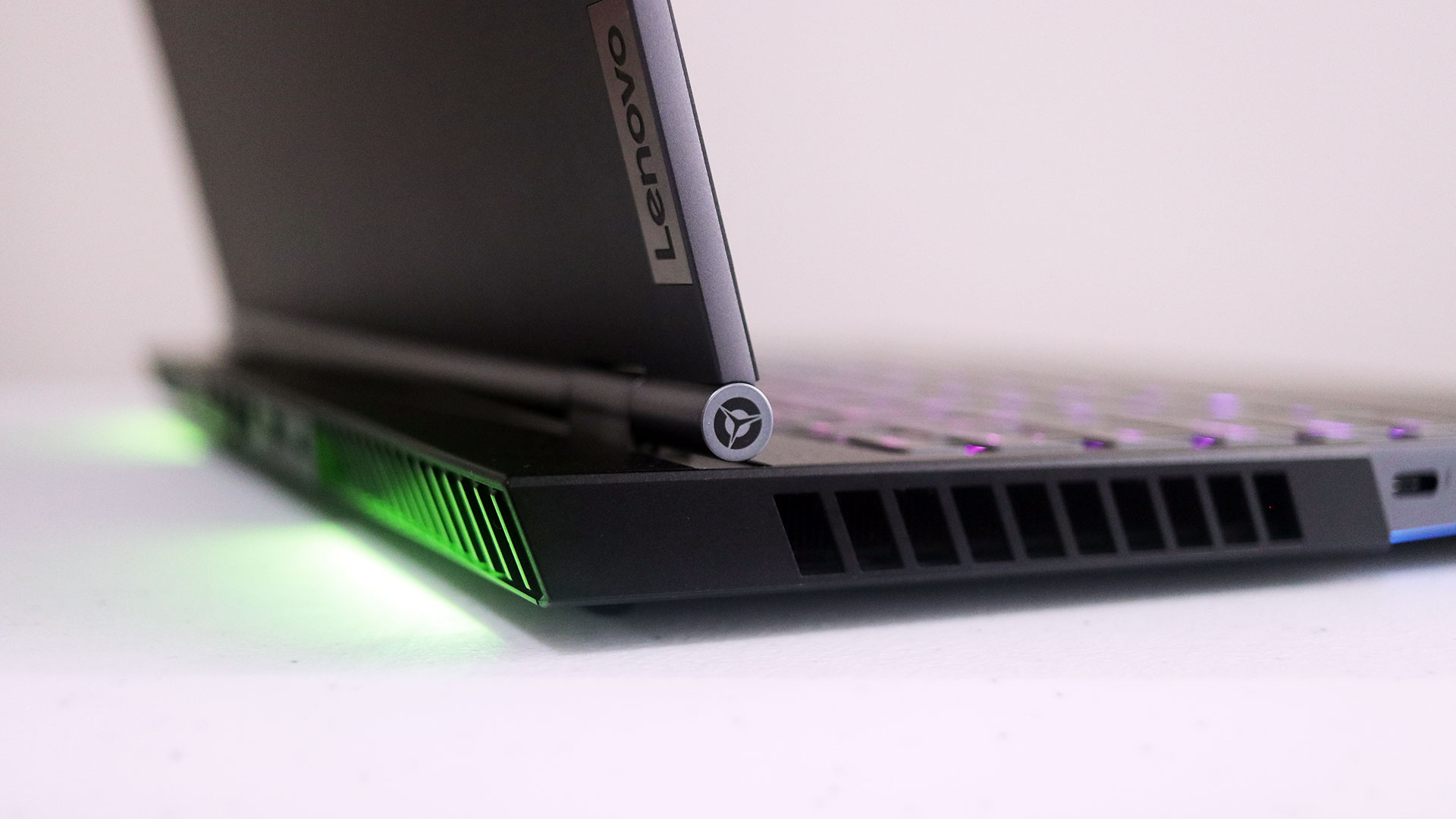 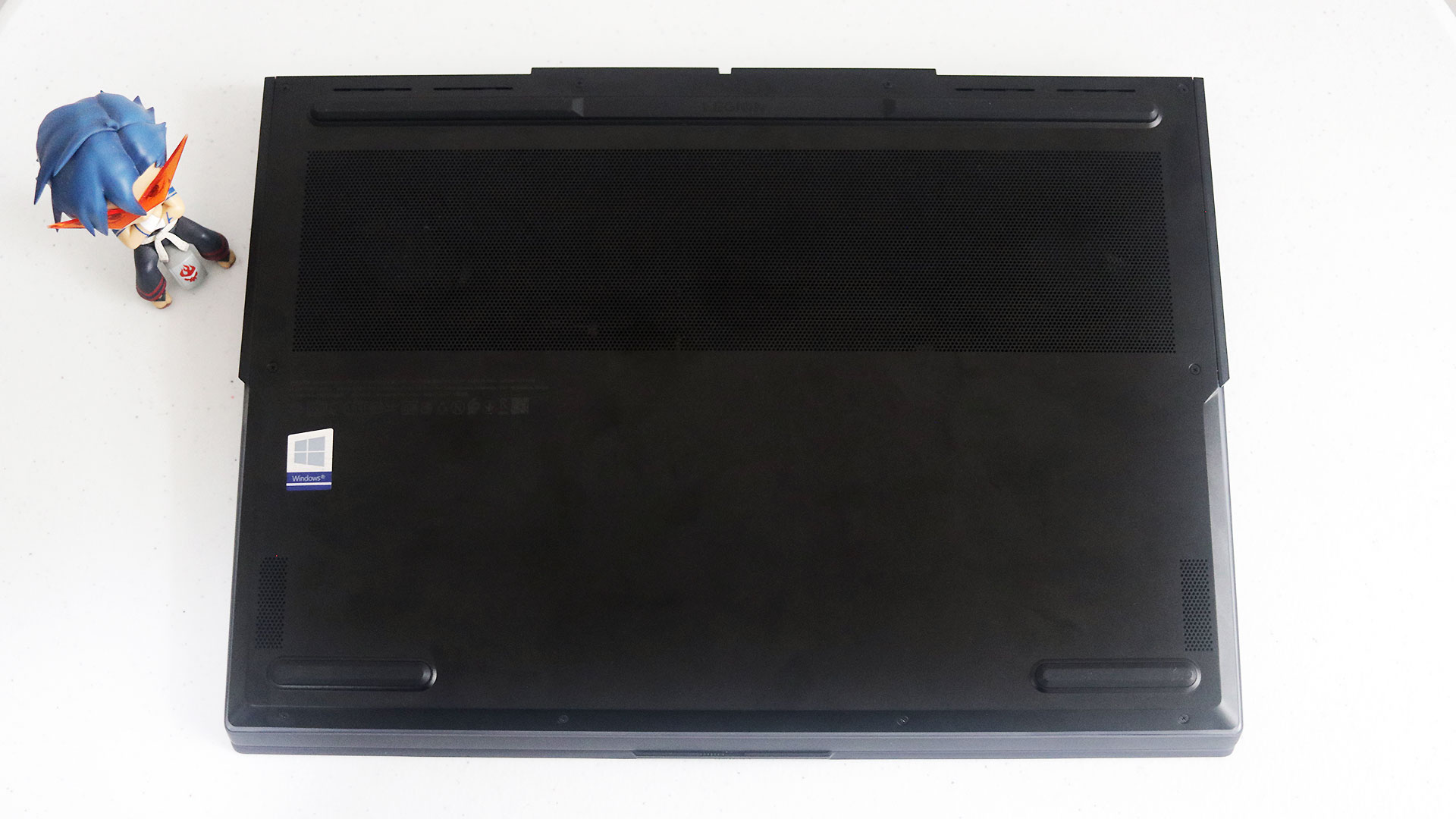 The new bottom panel still retains the one long and two short rubber feet to keep the Legion 7i elevated for intake but its perforations are now smaller and more numerous, which may lead to better airflow due to less space being blocked by plastic. The exhaust vents on the rear and side of the laptop now have simpler vertical slats instead of the grid configuration on the Y740. While the RGB lighting on the rear vents has been maintained, the lighting on the side vents has been removed in favor of RGB edge lighting along the bottom of the laptop’s front and sides. 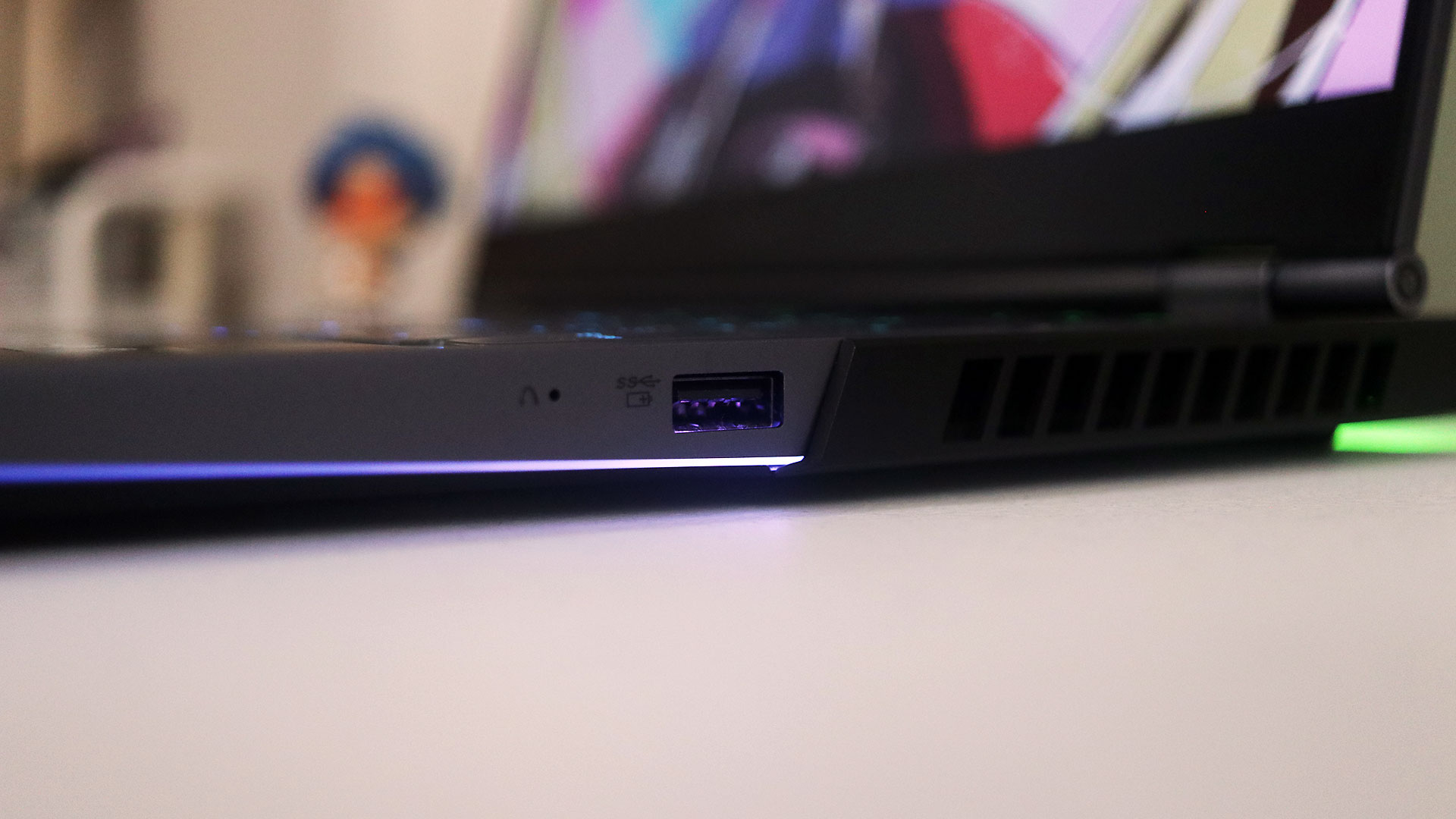 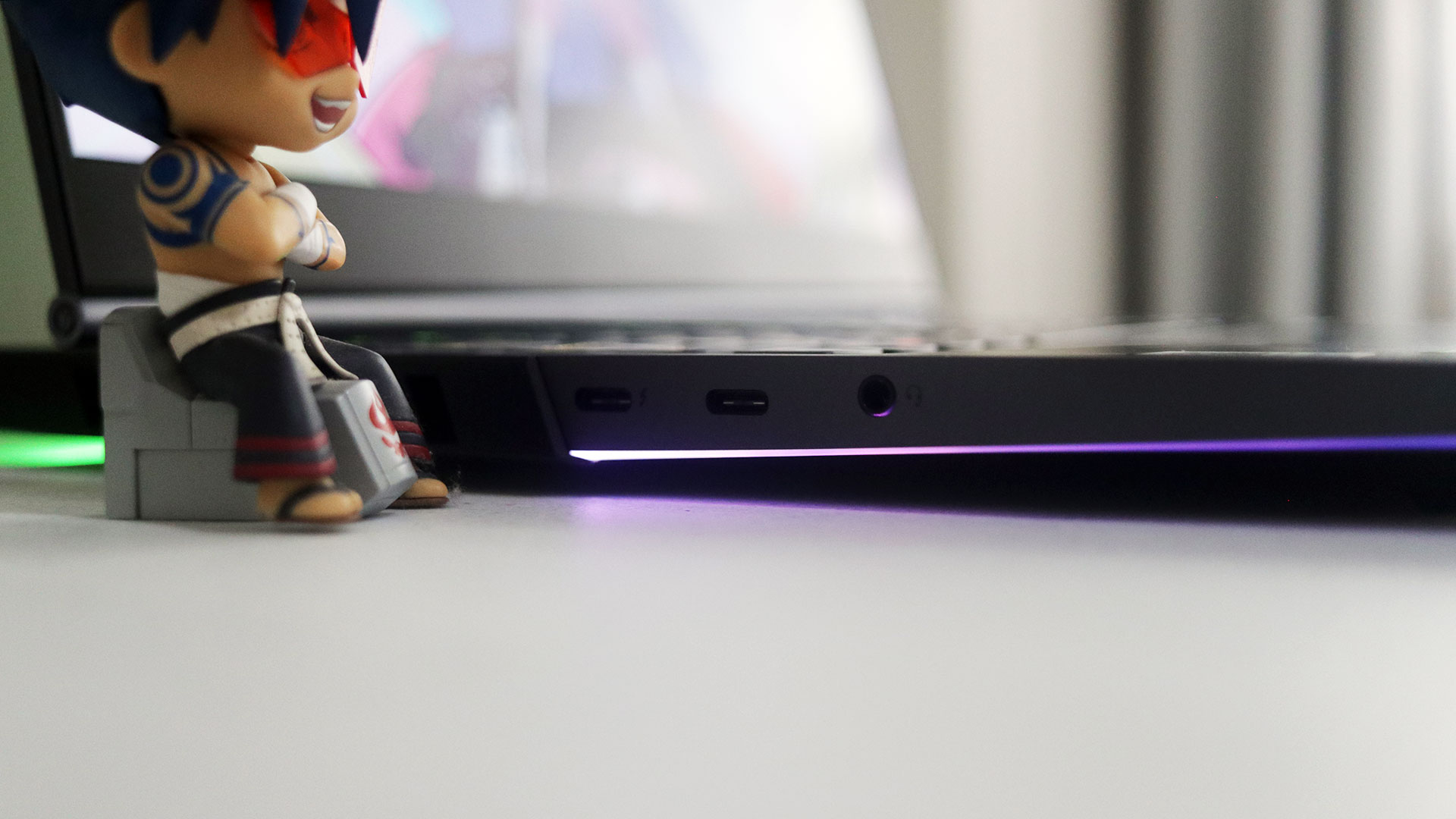 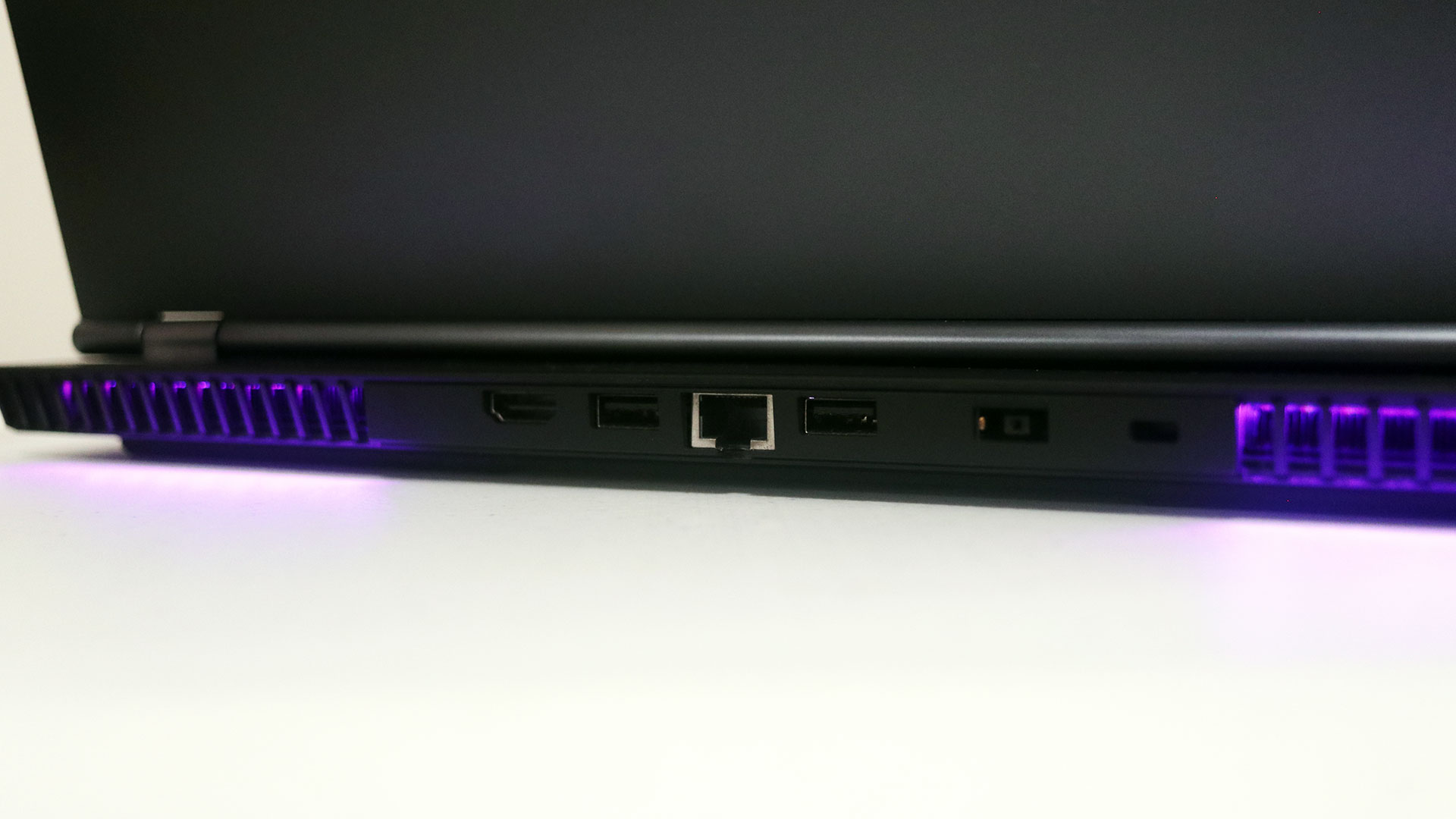 The forward-mounted hinge of the Legion 7i, which leaves part of its base protruding behind it, enables the laptop to keep a row of I/O ports on the center of the base’s rear. The rear ports include an HDMI 2.0 port, two USB 3.1 Gen 2 ports, an Ethernet port, Lenovo’s proprietary power adapter port, and a Kensington lock slot. Lenovo has removed the mini DP port that was on the rear of the Y740 and replaced it with a Thunderbolt 3 port on the left-hand side of the Legion 7i. The rest of the Legion 7i’s ports include a second USB-C port and 3.5mm combo audio jack on its left-hand side and a USB 3.1 Gen 1 on the right-hand side of the laptop.

Another of the significant changes to the new Legion 7i is the removal of the macro key column that was on the Y740 and the use of a TrueStrike keyboard with a number pad instead. The keys of the numpad are slightly narrower than the rest of the standard keys to be able to fit the cluster within the Legion 7i’s more compact chassis. The keyboard, as well as the rest of the body’s RGB lighting, supports Corsair’s iCUE software where users can customize all of the lighting. 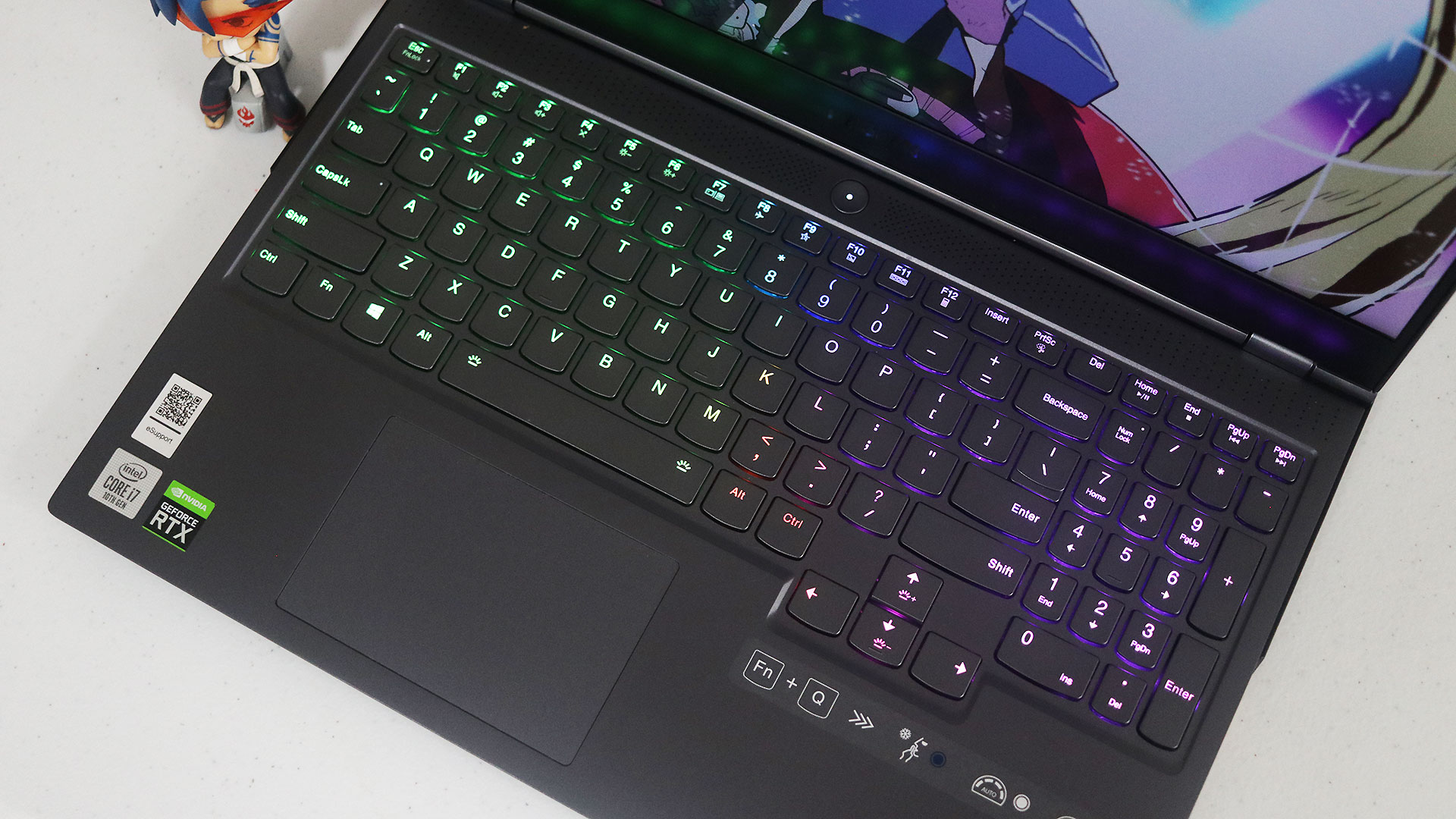 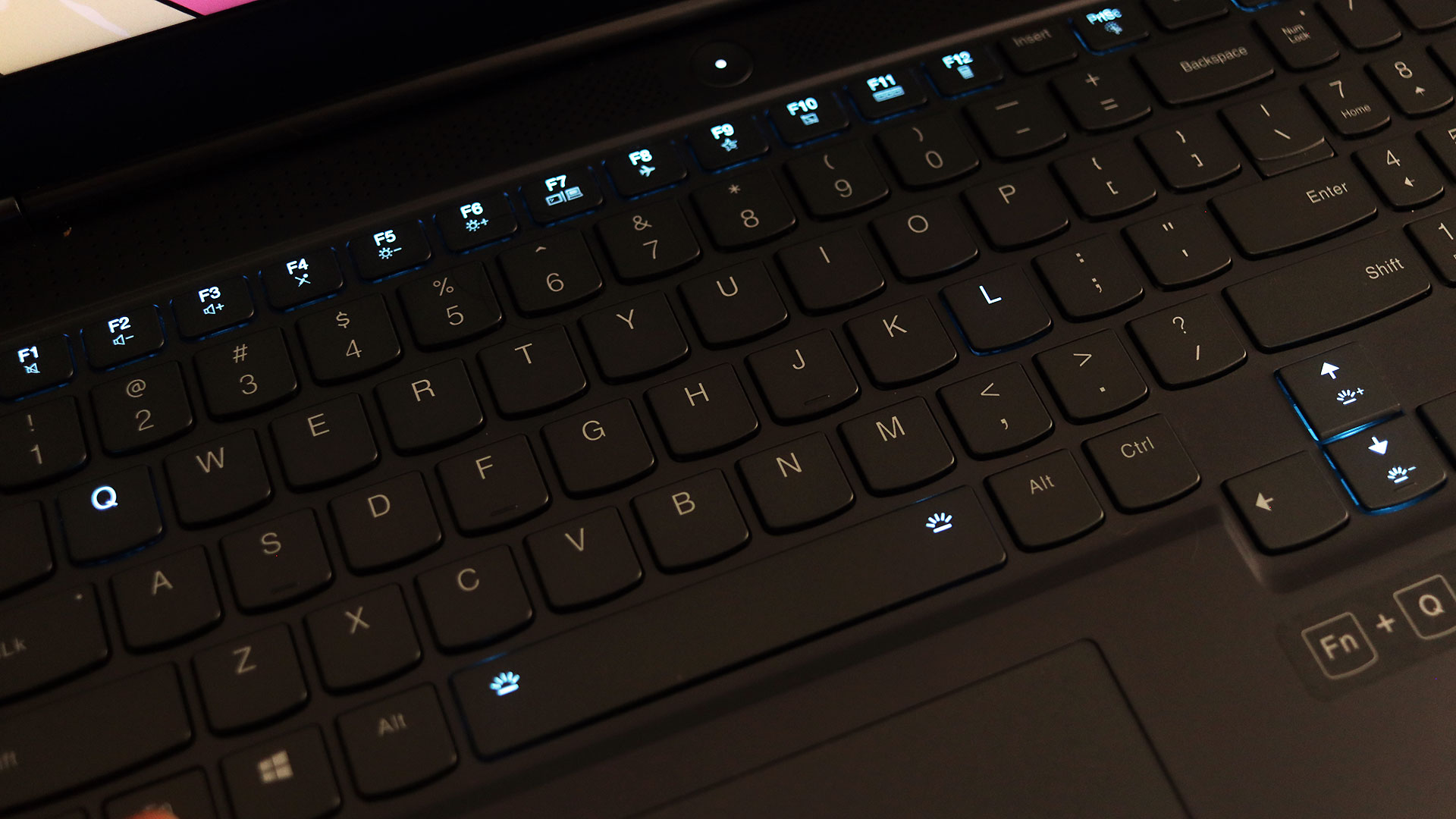 Notably, the arrow keys of the Legion 7i are larger than its standard keys and are positioned a bit away from the rest of the keyboard, which is very appreciated as many modern laptops utilize terribly small arrow keys that are too close to the nearby keys making it easy to mispress. The keyboard displayed barely any flex and the typing experience was generally comfortable but, apart from the better arrow key cluster, is nothing remarkable.

The touchpad has also been changed for a larger one with no dedicated physical buttons that’s easier to use due to the increased real estate.

The Legion 7i is equipped with a 15.6-inch Full HD (1920 x 1080) IPS display with a refresh rate of 240Hz and a 100% Adobe sRGB color gamut. It also has a peak brightness of around 500 nits and is VESA DisplayHDR 400-certified. While we’re currently unable to fully test the colors and brightness of the Legion 7i’s display, we were still fairly impressed by how capable the screen of the Legion 7i was. It displayed practically no backlight bleeding and the combination of its brightness and contrast gives it some impressive viewing angles. 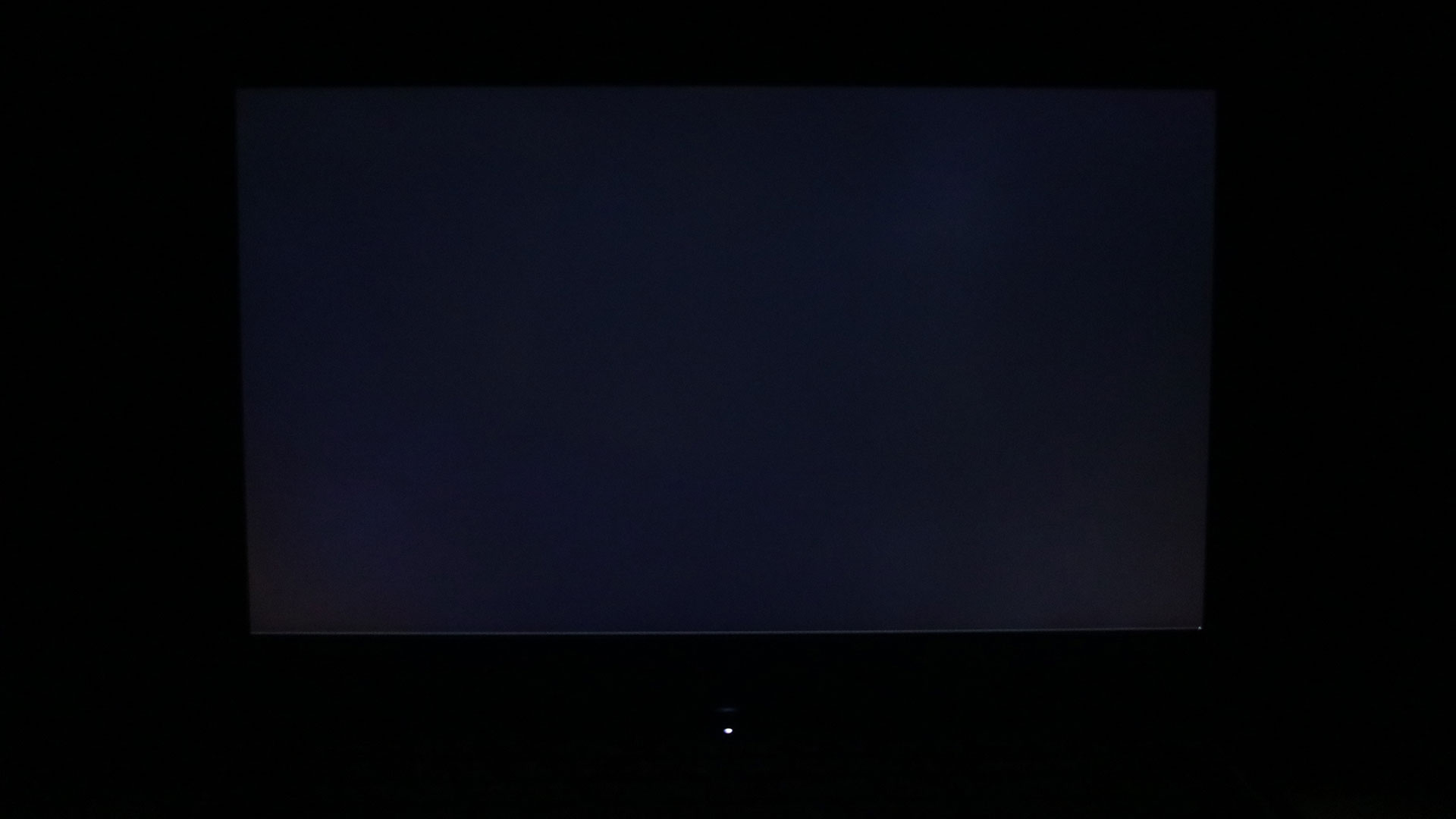 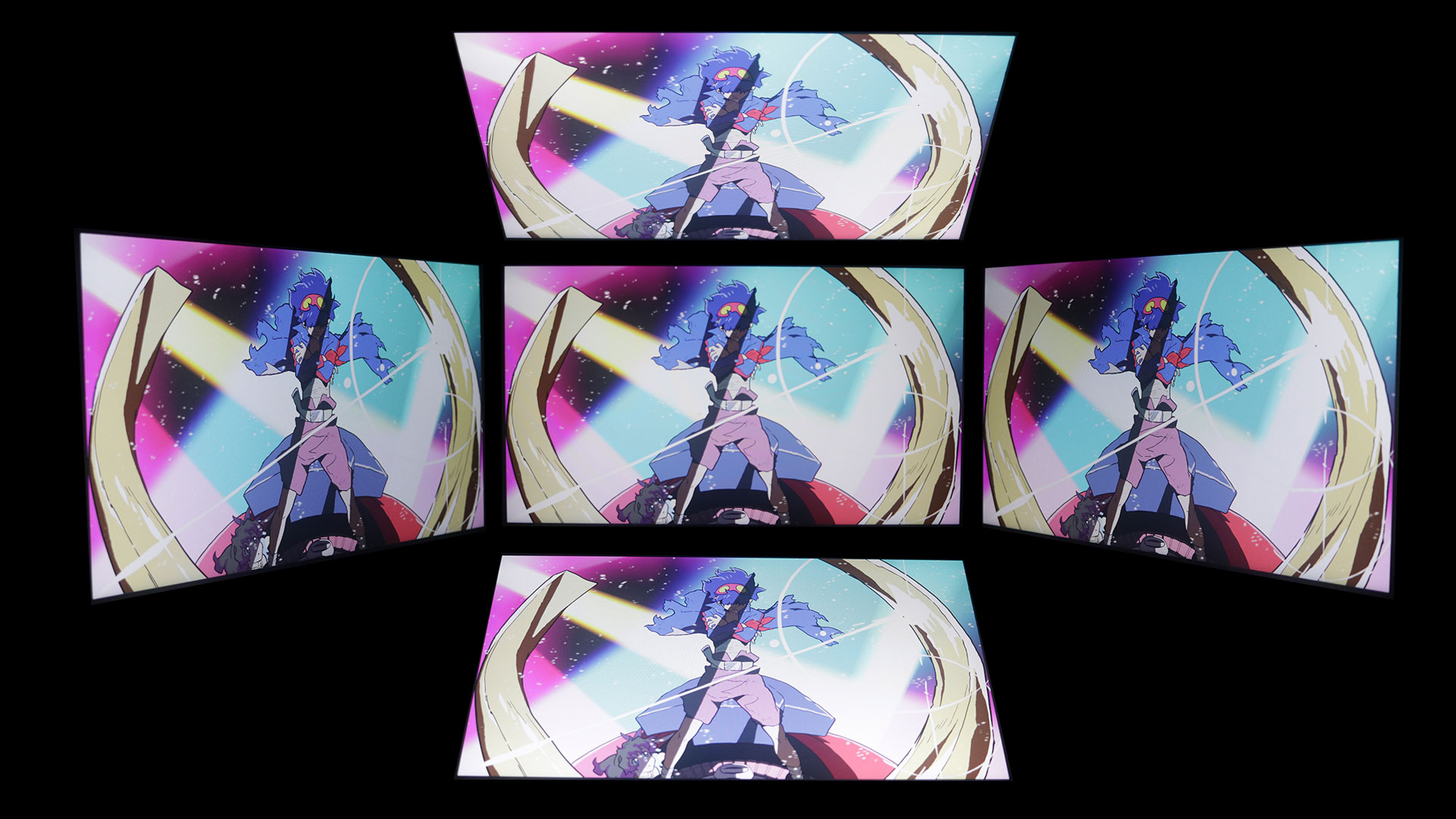 Removing the bottom shell of the Legion 7i is fairly simple but can also prove difficult, especially for the inexperienced. There are 10 screws as well as quite a number of plastic clips that secure the bottom shell to the rest of the laptop, the latter of which can be challenging to locate and loosen and makes removing the bottom shell pretty challenging. Once removed, users gain easy access to several of the Legion 7i’s components, including its two M.2 slots, battery, Wi-Fi module, and two RAM slots (underneath the square plastic cover near the center). 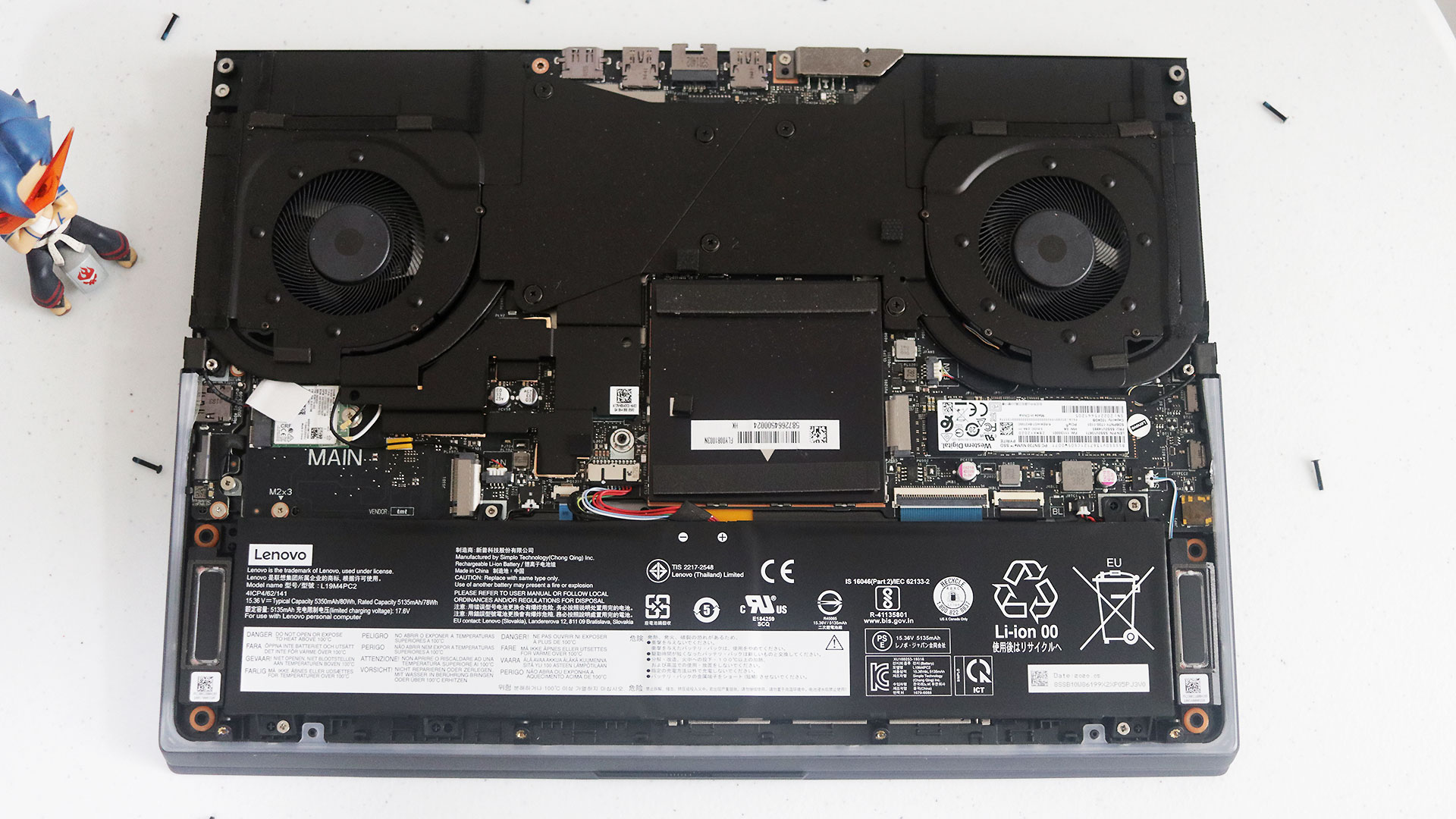 The Legion 7i comes with a rather unique feature called Q Control 3.0 that allows users to quickly switch between Performance, Balance, and Quiet thermal profiles. Notably, when the laptop isn’t plugged in, the Performance mode is locked out and users are limited to the Balance and Quiet profiles. We tested the Legion 7i in its Performance profile when we had the laptop plugged in while we used the Balance profile while in battery mode to see and compare the performance of the laptop in the two use cases. 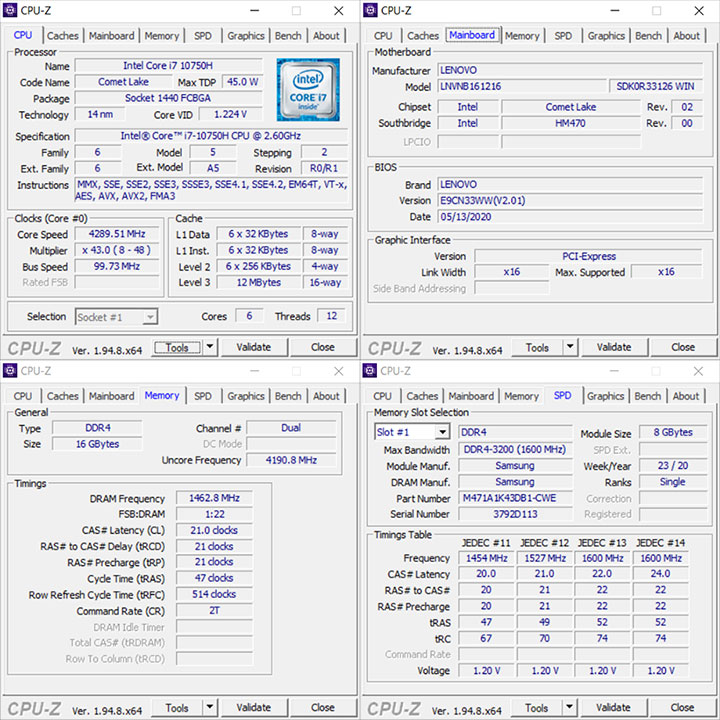 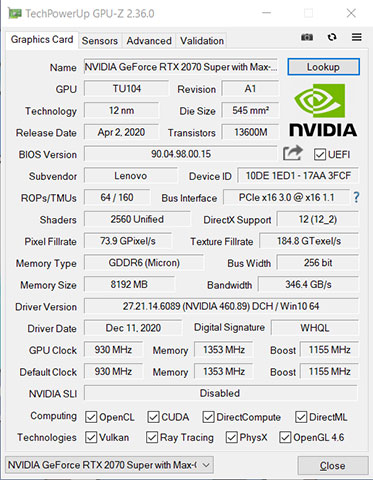 Our benchmark tests included the following: 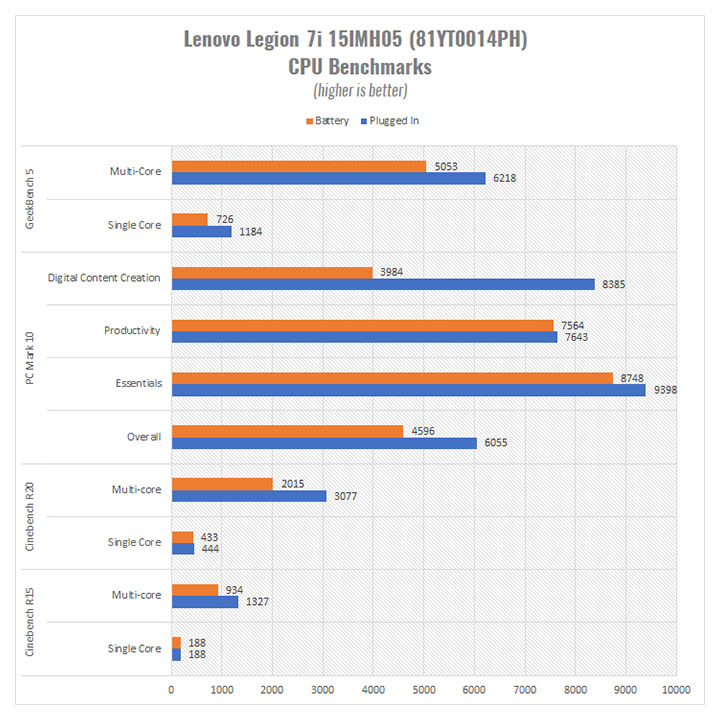 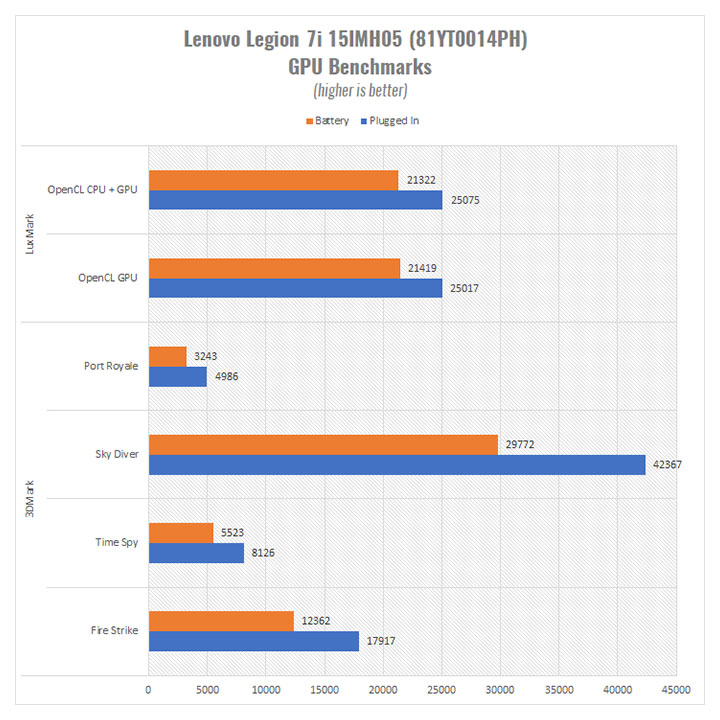 We found the difference in performance between using the Legion 7i while it’s plugged in and when it’s running on battery pretty noticeable, especially in operations that either use multiple CPU cores or require more power from the laptop’s GPU. But single-core, CPU-leaning operations will run similarly in both usage modes. So users won’t have much issue running simple tasks on the Legion 7i even on battery while more strenuous jobs such as video rendering will perform significantly better when the laptop is plugged in. 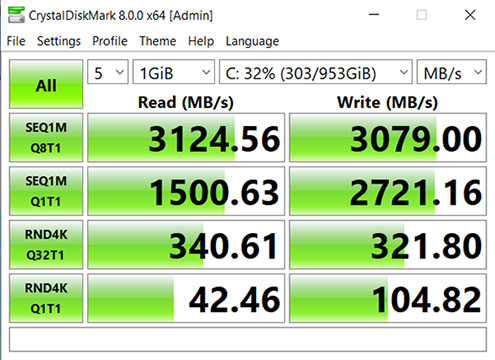 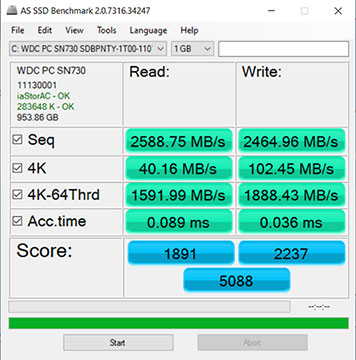 Lenovo has equipped the Legion 7i with a single WD SN730 1TB NVMe PCIe Gen3x4 M.2 SSD. Both our AS SSD and CrystalDiskMark tests show that the SN730 is able to come pretty close to its rated sequential read/write speeds of 3,400/3,100 MB/s. Interestingly, it’s sequential write speed is notably higher than some of the other M.2 NVMe PCIe SSDs we’ve tested recently but is trailing in other aspects such as its sequential read speed and both random read and write speeds. Nonetheless, it’s definitely still a decent enough drive for the Legion 7i.

We also ran the Legion 7i through several built-in game benchmarks at different quality settings to test its gaming performance in the same two use situations (plugged-in and battery), including: 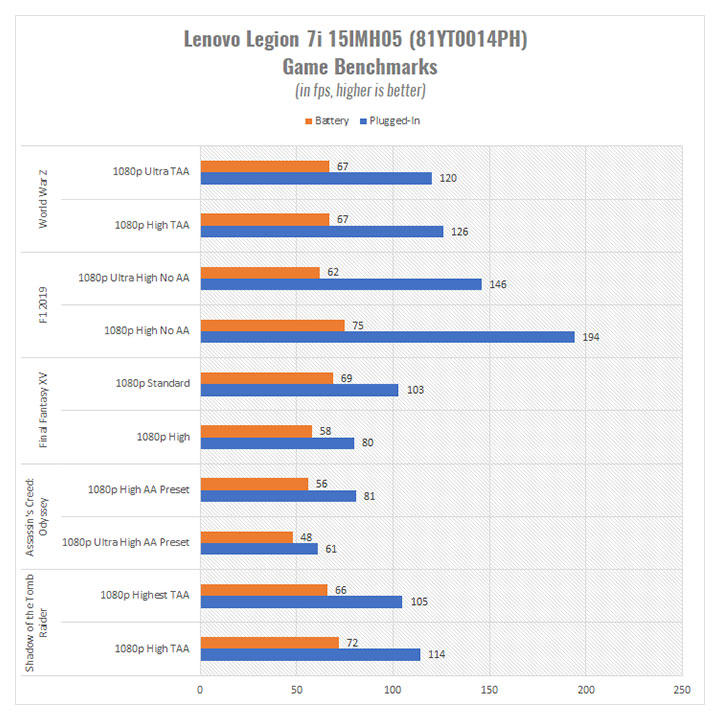 We were pretty surprised with how the Legion 7i performed in our game benchmarks, particularly in battery mode. While its performance when plugged in is pretty much as expected, with it easily reaching over 100 frames per second on most of the titles, the results from our tests while the laptop was running on battery was definitely more than expected. The Legion 7i was able to reach or come near 60 fps in most of the titles, with only Assassin’s Creed Odyssey on Ultra High settings bringing it below 50 fps.

While it isn’t usually recommended to play games on a laptop while it’s running on battery mode, it’s good to see that the Legion 7i is still easily capable of providing a decent gaming experience if the situation arises. 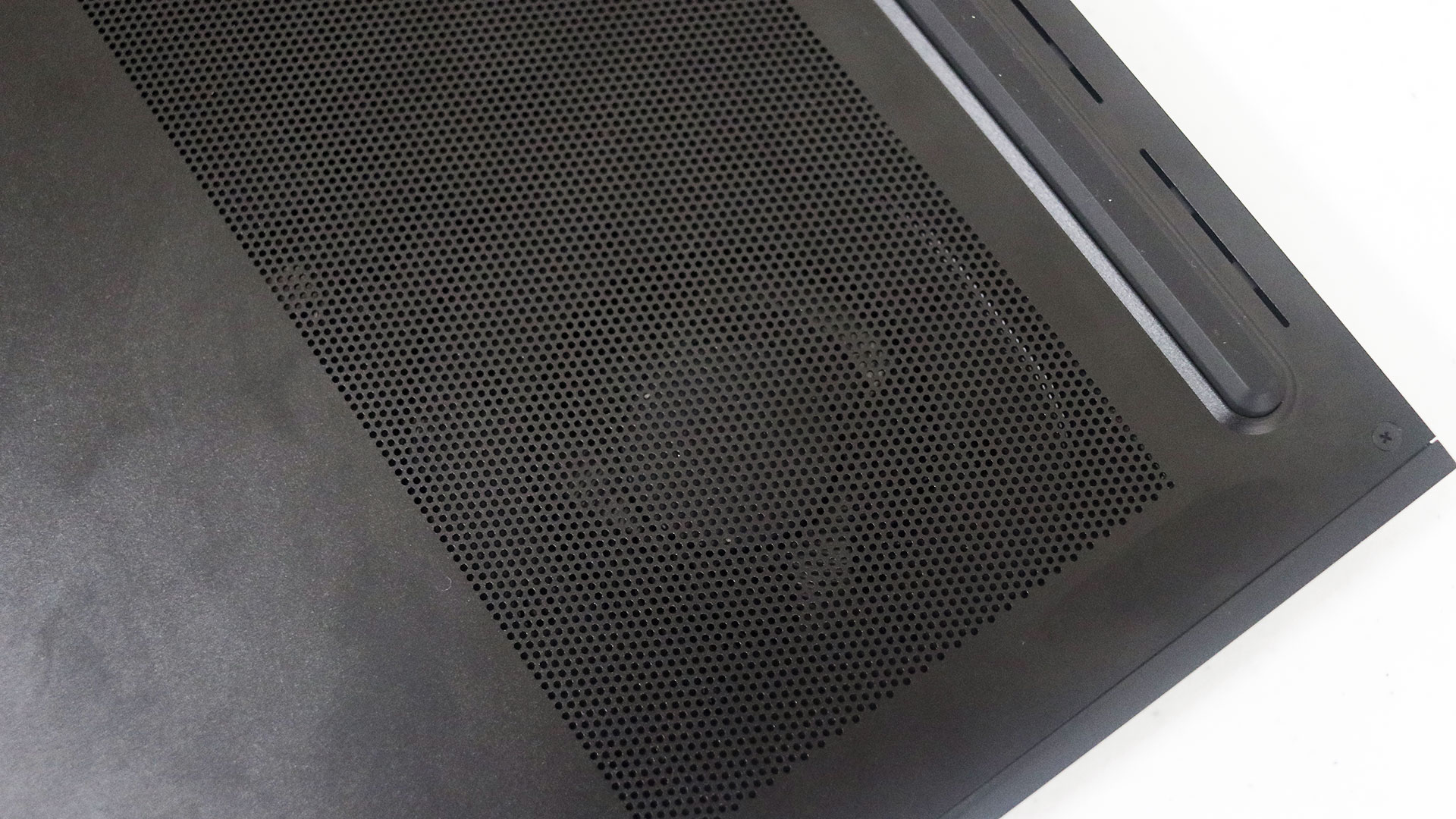 The Legion 7i’s generally impressive thermals do come at the cost of noticeably noisy fans, which registered 41dB on load in a room with an ambient noise level of 25.4dB. The fans are definitely noticeable when they’re running full blast in a quiet room but are barely audible if the laptop’s speakers are cranked up.

Lastly, the battery life of the Legion 7i is pretty much as expected, lasting only 2 hours with heavy usage and around 4 hours with light usage, both of which were at 50% brightness.
So while the battery on the Legion 7i will let users perform basic tasks, such as web browsing, without having to worry about the battery running out of power right away, they’ll have to be more attentive when attempting to play games while on battery. Fortunately, it only takes about an hour to charge the battery from empty to full. 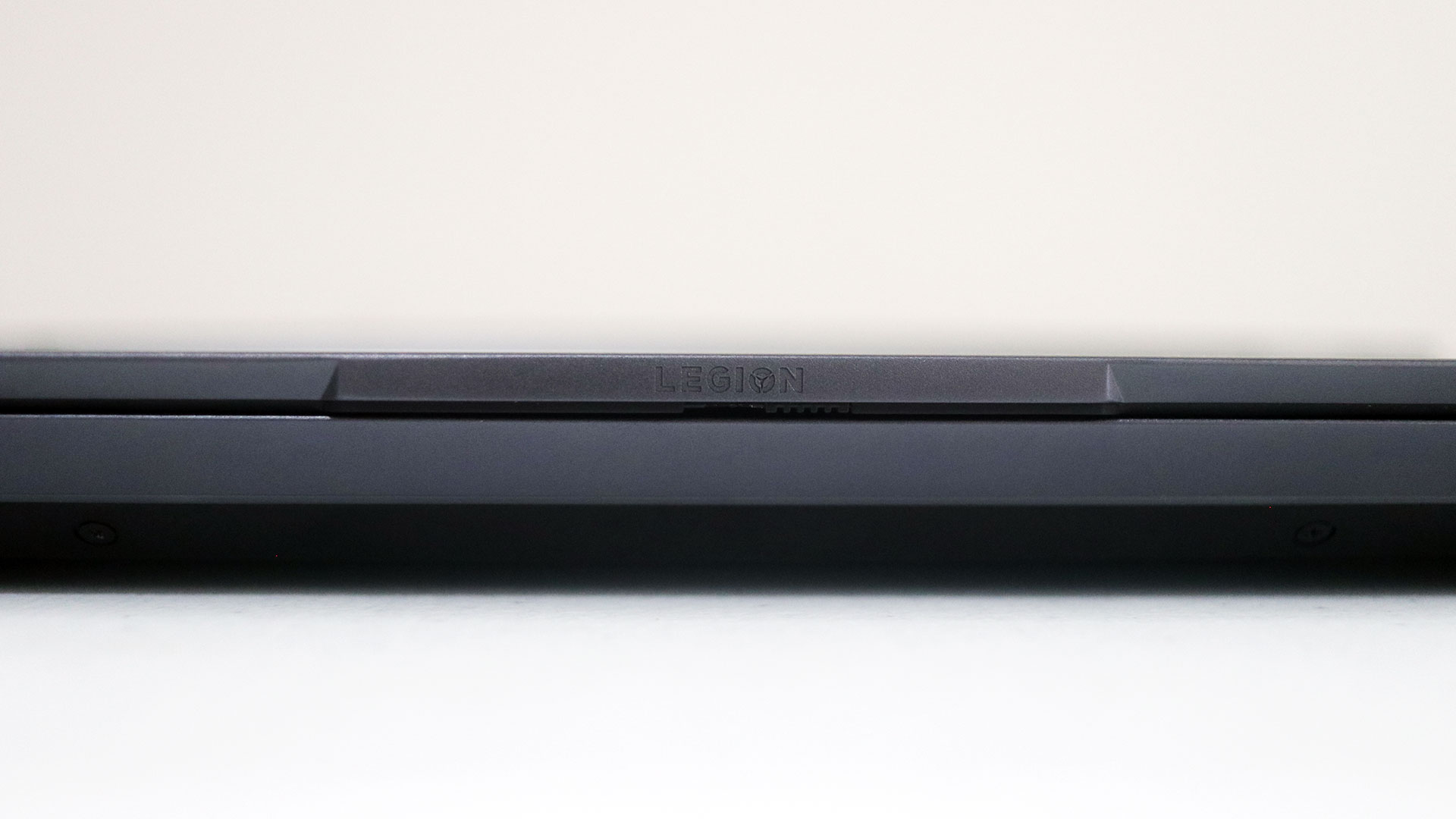 The Lenovo Legion 7i is one of the most impressive laptops we’ve reviewed so far. It’s a simple and straightforward device that is clearly focused on optimization rather than spectacle. While it still does feature a few bells and whistles, with its assortment of RGB LED lighting, its performance and features easily take center stage. Lenovo’s Q-Control once again makes it incredibly easy for users to change the laptop’s thermal profile and help maximize either its performance or battery life or minimize its noise. The Legion 7i performs impressively in pretty much every aspect and comes at a rather reasonable and competitive price for what it offers as well as considering its position as a flagship gaming laptop.